Underwold Idle: The starter guide YOU should read

This guide covers the basics until first game reset.

When you start this game, all you can do is purchase an Agriel. But you'll need to know some things.

- Agriel, as every bottom character in every faction, are resource producers.

- Agriel is the gem producer, and gems are for the Demon Faction.

- Ghoul is the soul producer, and souls are for the Undead faction.

- Leviathan is the Raw Mana producer, used for the Drowners Faction.

- For example, a Dantalion will produce Agriels.

To start the game and it's fearsome upgrade spiral, you should use your starter gems and produce a Agriel, which will be slowly start producing gems.

When you get enough Agriels, you'll be offered an update. And here is the trickiest part of the game. 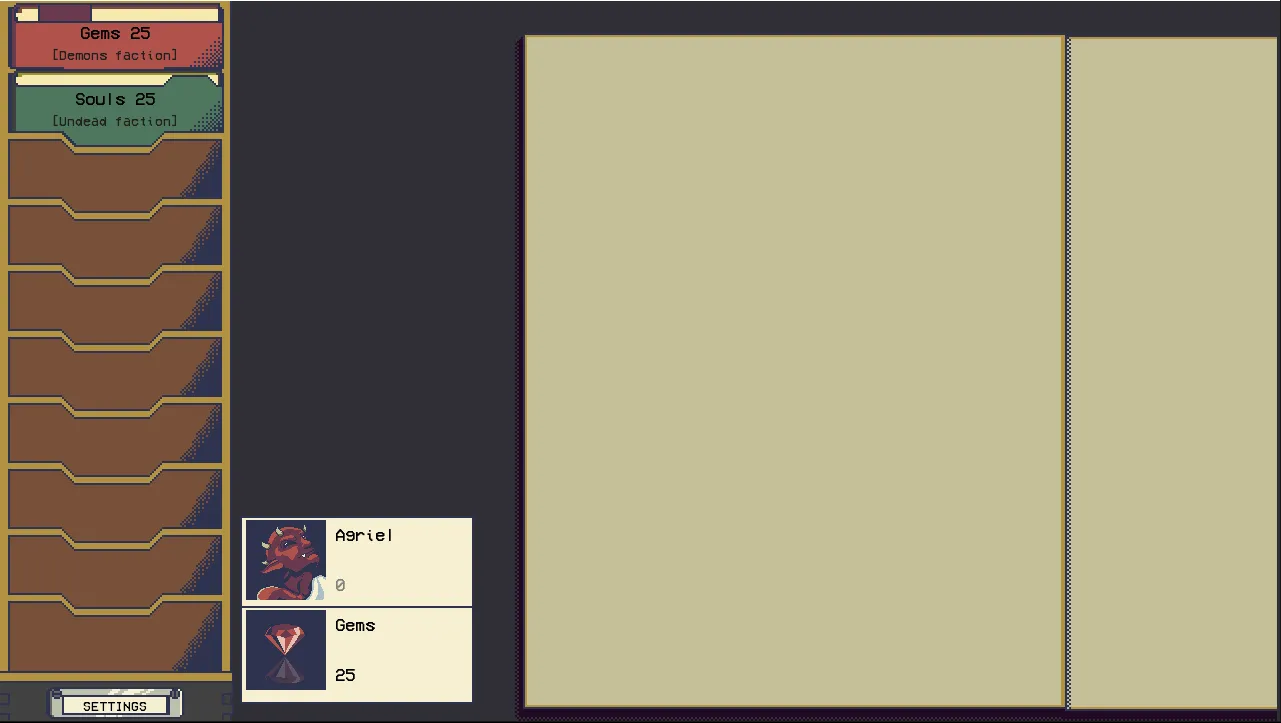 On the left side of the screen, you'll see the Faction's tabs. To the right of that you'll see a list of resources and units of that faction. To buy a creature, click on it and select Create one

The next area to the right shows information about the current unit or resource selected and the final area opens up when you are ready for the first reset, with several options.

In most idle games you upgrade as soon as the upgrade appears. If you do that in Underworld idle you risk making the game more difficult because UPGRADES CONSUME UNITS.

Each upgrade doubles the power of the remaining units so, as a general rule, wait till you have double the units needed to do an upgrade. Because if you upgrade as soon as the unit shows the asterisk (*) that indicates it's ready for upgrade, you'll find yourself with almost no units of that type.

Later on, when you start getting how this works, you'll notice the difference in each upgrade due to the speed at which each unit is being produce in relation to the required units for the upgrade. And if the speed is high enough, you can forget about doubles, upgrade and know that you'll get back on track almost immediately.

Gems also get something that resembles an upgrade popping out every now and then. Instead of gems getting more powerful, what you get is the option of buying Sphere of Fire and Fire Skull. It's not like you can select whichever you want, each has a price in Gems. Sphere of Fire can be give to any Demon that has been upgraded at least once. Fire Skull can be given to Undead that have at least one upgrade. This gems offer a 50% productivity increase, and you can give more than one to a single unit, though they get diminishing returns.

Souls have a similar mechanism. They offer Rotten Doll and Altar of the Soul. Rotten Doll gives Waste, and each time you buy one, the next one gives a little more Waste. Altar of souls add decimals to the soul cost, letting it drop lower and lower for units that have a higher unit above them.

The energy starts at zero, and remains that way till you get enough gems to unlock the first button. Each button offers a different option, and the energy they require will get replenished slowly over time. You'll also get energy every time you unlock a new button. The buttons are all either percentage based or scale up as you grow in power, so they are always useful.

The fifth button has a mechanic for unlocking the Warlock faction, but you won't get access to that in the first game reset, and you'll probably need several resets till it gets good enough to get all the necessary resources, so don't worry about it for now.

It should be noted that as you get higher and higher units of a faction, it makes no sense to buy the lowest units anymore, as the amount you'll get is not significative to alter the game. So you'll start to control de amount of lower units by getting more highest units that cascade production down.

After you pass the threshold of the first undead, which produces souls, you'll notice that it requires Gems and Souls, but also Raw Mana. You have 150 Raw Mana, so you'll be able to get some ghouls to produce more souls.

It gets trickier for the Drowners faction, as they require Gems and Souls, but also Waste. And Waste is not a product of your units. Instead, you'll need to go to the Waste tab, that'll direct you to the Junkyard. Here you'll find some options for getting waste by sacrificing Gems, Souls or Raw Mana, but only after you pass each required amount. You'll also be able to get some waste by special upgrades of souls, but not in a continuous way.

Lastly, waste can also be found when you reset the game.

The Junkyard And Offline Time

In the junkyard tab you'll also find the daily junkyard search and the monetizing options of the game. The daily option it's not really daily. Each time you use it, it'll take 24 hours from that moment to activate again, so that option is always shifting in time. The good news is that it also counts the time you are not playing the game.

That takes us to the most particular aspect of this idle game. The offline time counts only for three things.

I find it funny that the game does not give us any gems, souls or raw magic, but the most limiting resources: The energy that you have no way of controlling speed and the waste that's difficult to get.

The junkyard also lets us collect three scarce resources, a part of the monetization of the game. Every daily search can give us some Tokens, Battery or Gear. Tokens are a way of getting more Batery or Gear, and besides the ones in the daily search, you can buy more with money. Batteries are used to replenish Energy for the buttons, and Gears are a permanent upgrade for the unit that gets assigned one that remains between resets.

When you go to the Junkyard (the Waste tab) you'll see that besides waste, each Gem sacrifice gives Hell Ashes. When you reach 75 Hell Ashes you'll be able to go to the Demon Faction, and then go to the new option that appears, the Boiler Room. You'll also notice that there's another new tab, called Contracts. Demon Contracts require prestige, and are permanent upgrades for the game.

Each contract offers a different game modification, and even different number of levels you can get. So, get your contracts and then purchase your first Agriel again.

I hope this helps you understand the basics. There's much more to discover.