Hell Knight and The Hands-Off Team

For this build, we'll be using Hell Knight because of its Kindling perk. It has quite a few utility perks to increase the effectiveness of the Firestorm spell that Kindling provides as well as boosts to the combat ability of your creatures. The theory behind this build is making use of Firestorm, other spells, and triggered effects that happen outside of the normal combat order. Eventually, survivability options will be added to allow for delving into the harder dungeon settings and fights.

The cornerstone perk of this build:

Important things to note about this perk:

The first creature in your team Casts the spell

It hits All enemies

It applies a Debuff called Burning to All enemies

It is a Chaos (Red) Spell that is Cast but not a Spell GemThe accompanying buff to the cornerstone perk:

This should be your second grab for perks. It directly affects the damage of your Firestorm based on your Attack and applies directly to other utilities we will be stacking to go along with it.

The other perks are all great but, I'd highly recommend picking up Magma Diver, Massacre, Reckless Abandon, and Indomitable (pick this as early as you feel is necessary). They will only really be used for cleanup or when debuffed with Silence.

I'm going to list decent choices that play well with Firestorm (or at least can kill story bosses) early game. These will all be replaced as soon as unlocking Bastion or as late as Barrens. I'm recording this as I play through a New Game so I can provide a more realistic build list.

Starting out we've got a Chaos Asura and a Light Vivifier. Not a terrible start as you can craft Molten Armor for later and a 2x Attack Sword for the Asura to get by. That'll carry us until we customize our first team. Let's see what we get.

I started grinding Realm 2 until I had a full team with Asura, Satyr, Pilwiz, Pilwiz, Hellhound, and Ent in order to prepare for the boss at Realm 3. Make sure to Save + Restart when you get enough to make a creature then head back into a fresh realm (Can't gain creature points if you have one of the same type ready to make). Make Pilwiz Peasants above anything else but don't run without a full team to save for it. The Hellhound and Ent will carry any lackluster DPS for a little bit.

My goal before reaching Realm 6 was to have a fully Sword Artifact team of Pilwiz Peasants and Gimp Mummies with an Ent. I also slowly started building my artifacts and spell gems. At this point, I was able to start handling Mini-boss rooms without much issue making resource grinding much faster.

3x Vampirism - Give everyone heal on hit for extended fights

Once I got 100 perk points (Start of Caustic Reactor), I took Kindling and switch my highest Intelligence (with Personality Growth Up Intelligence or Field Item Tome of Shrewdness etc) creature into my first slot and put the Staff on him. From now on, all priority goes to maximizing the Staff for Intelligence, Spell Potency, Damage Reduction. This is when you also unlock Crazed Leper. Another essential piece of the puzzle. I swapped Ent out for him immediately.

Leper is in the first slot with Staff once he levels up (Highest Int until then). Everyone else is Swords. Personality wise making sure no Sword holders have Down Attack and the staff holder doesn't have Down Intelligence. Nothing else much matters at this point. Didn't bother upgrading any spell gems. Firestorm's damage will suck early on - expect it. Until we start adding multipliers, it is just a debuff for now.

Grabbing at least 3 Noxious Smogs from Caustic. We'll need them for fusion. As I was collecting Noxious Smogs, I realized the Ent just wasn't getting Mending off enough to be worth it. I ended up swapping him out for one of the Noxious Smogs. Once it was leveled up, it was far more reliable.

I've been adding Inner Focus perk as points allow. I can see it slowly raising Firestorm and Corpse Explosion. It may be more viable to focus on the AoE damage and Crit perks at this level but I'm sticking to my original idea.

This point begins with Bastion and Fusion. It is where the build starts to come into its own. Slowly building all of the pieces below as we go. Start with Noxious Smogs to fill the missing pieces for secondary infuse (to get Chaos) until you unlock the rest.

The team will consist of:

Up to Triple Cast on Firestorm and Inner Destruction

Up to Double Cast on Corpse Explosion

Leech healing on all damage

Chaos Spells (Replace any missing with another Chaos to keep trait bonus):

Death Spells (Replace missing with "Enemies" or "Caster" or "Your creatures" spells NOT "Target"):

One each of: Annihilate, Decay, Defile, Damnation, Unholy Augmentation, Wormrot

Upgraded with: Cast on Attack - Cast on Heal - Generous 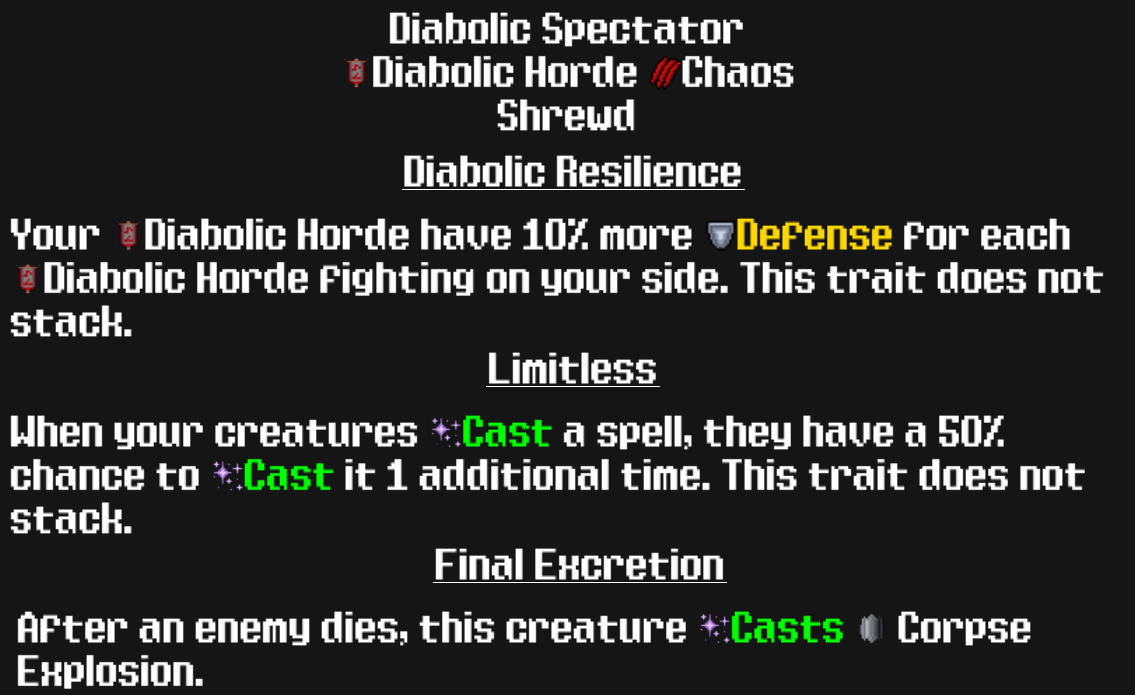 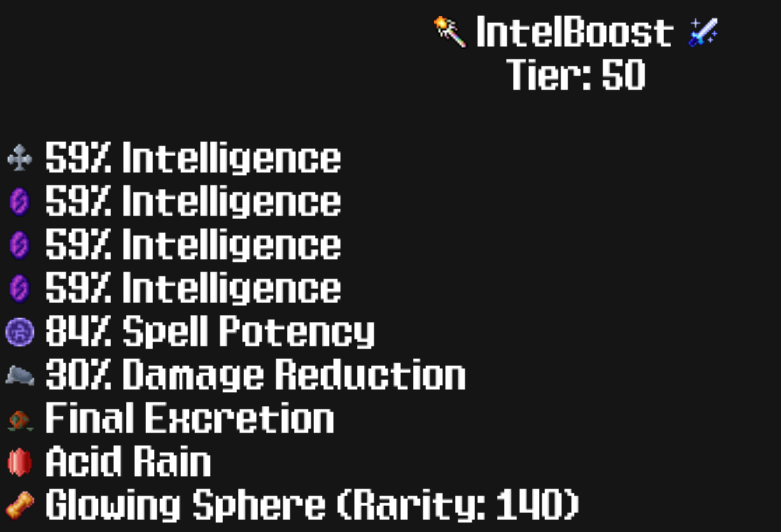 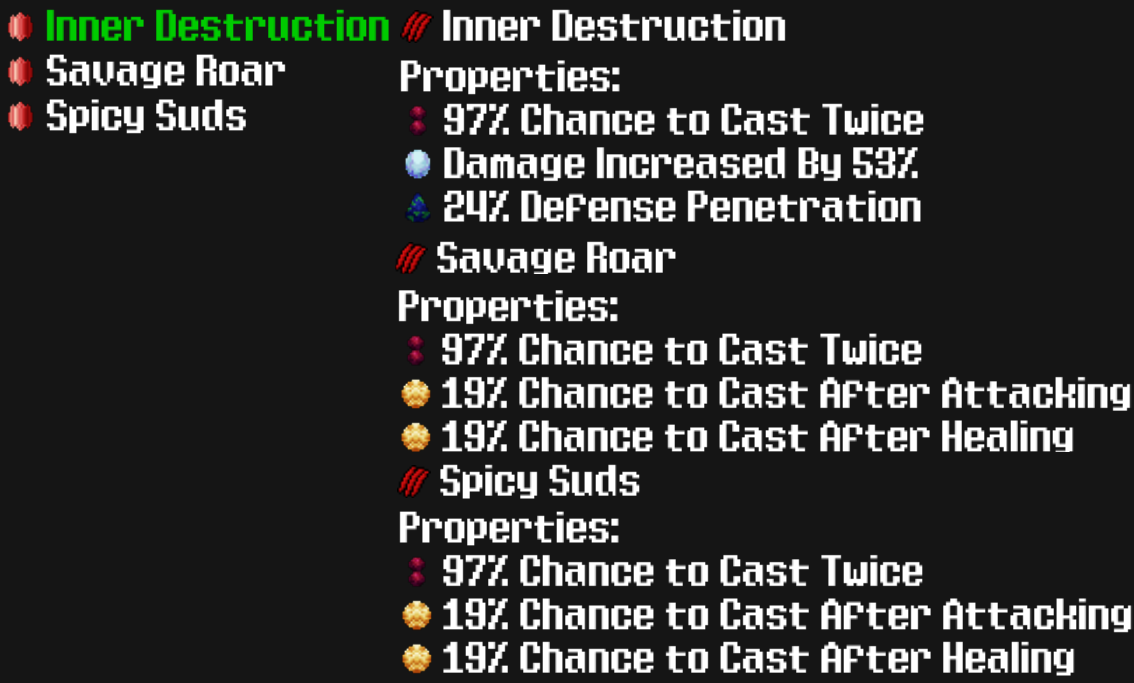 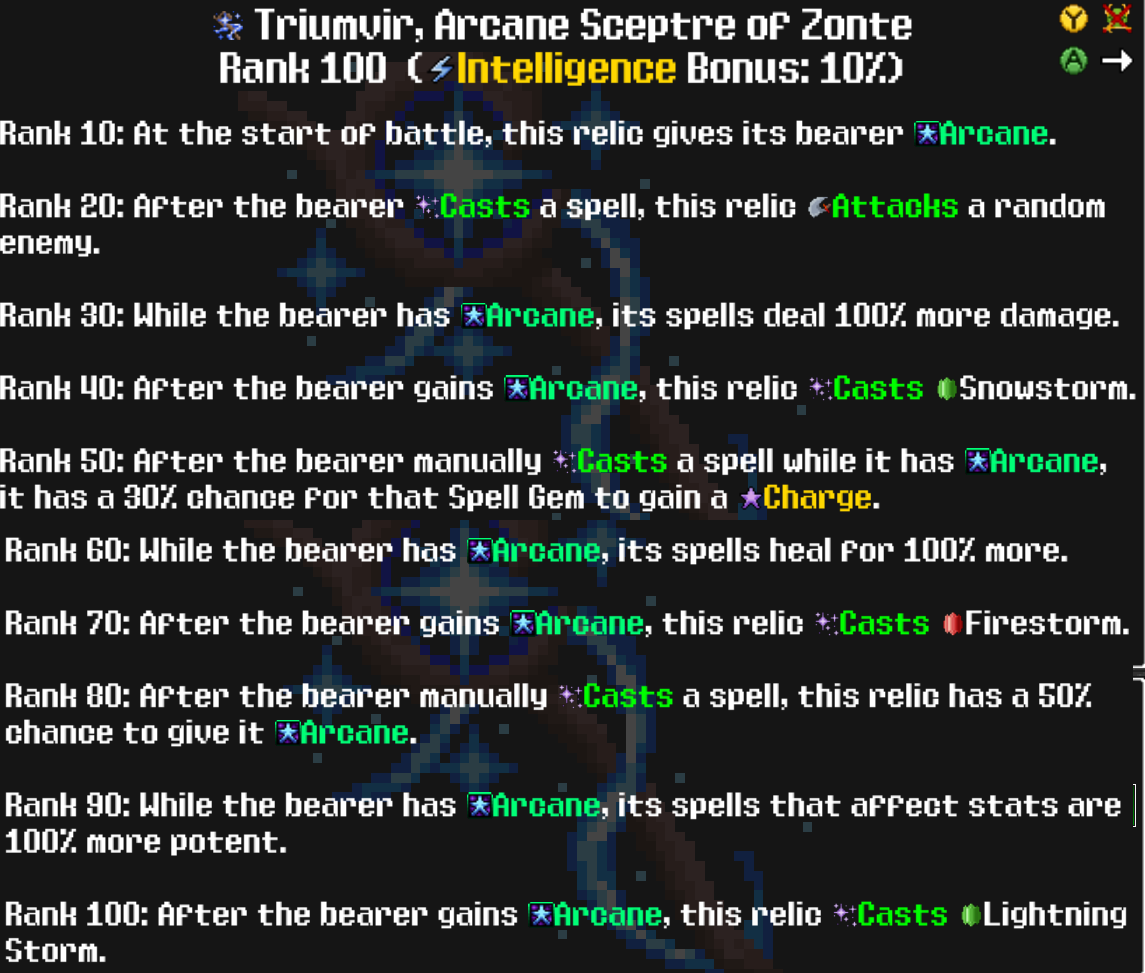 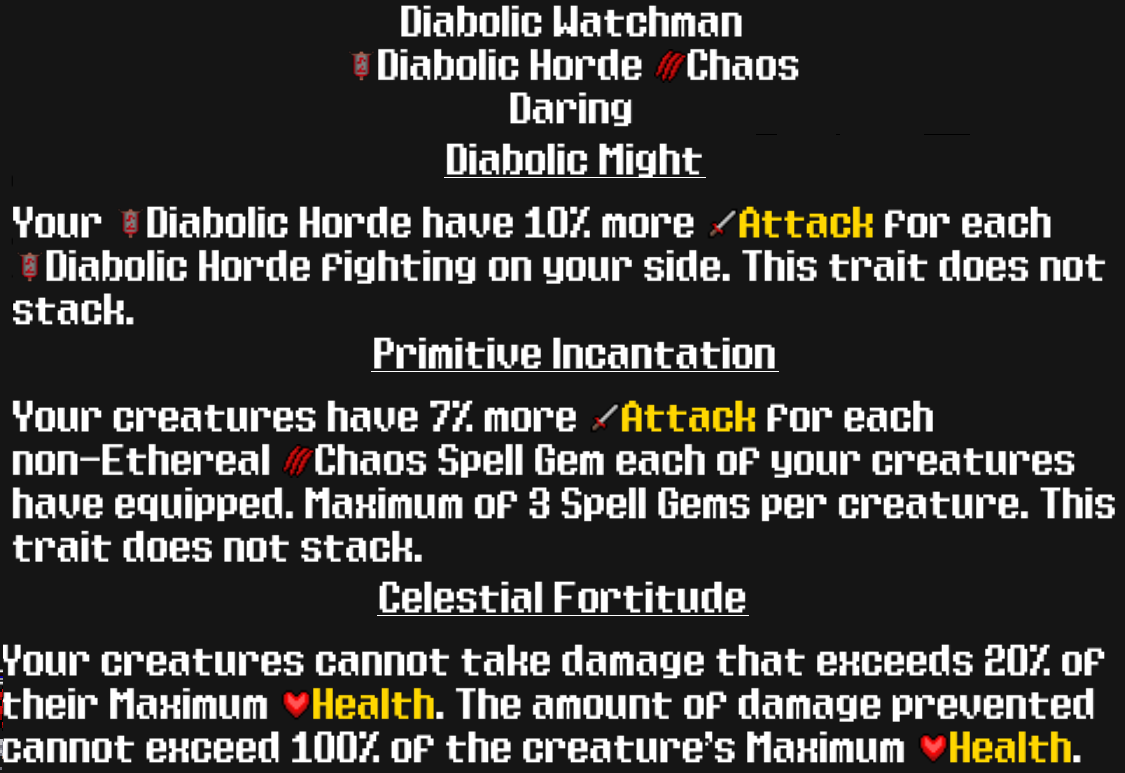 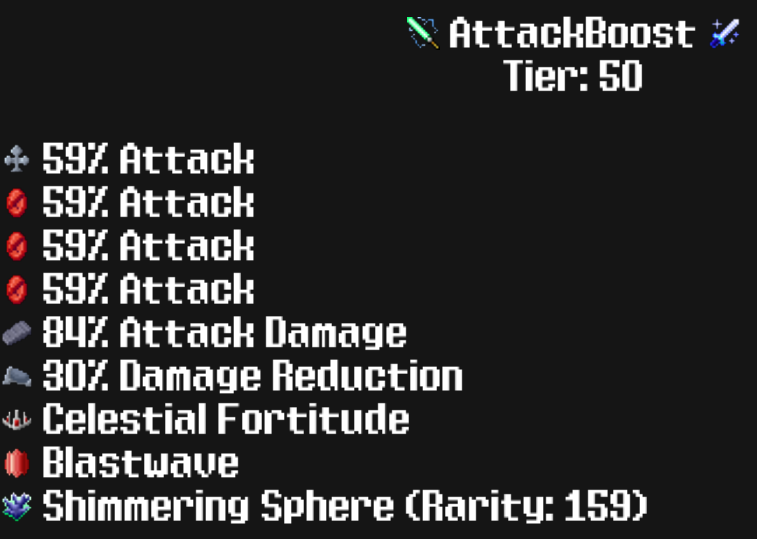 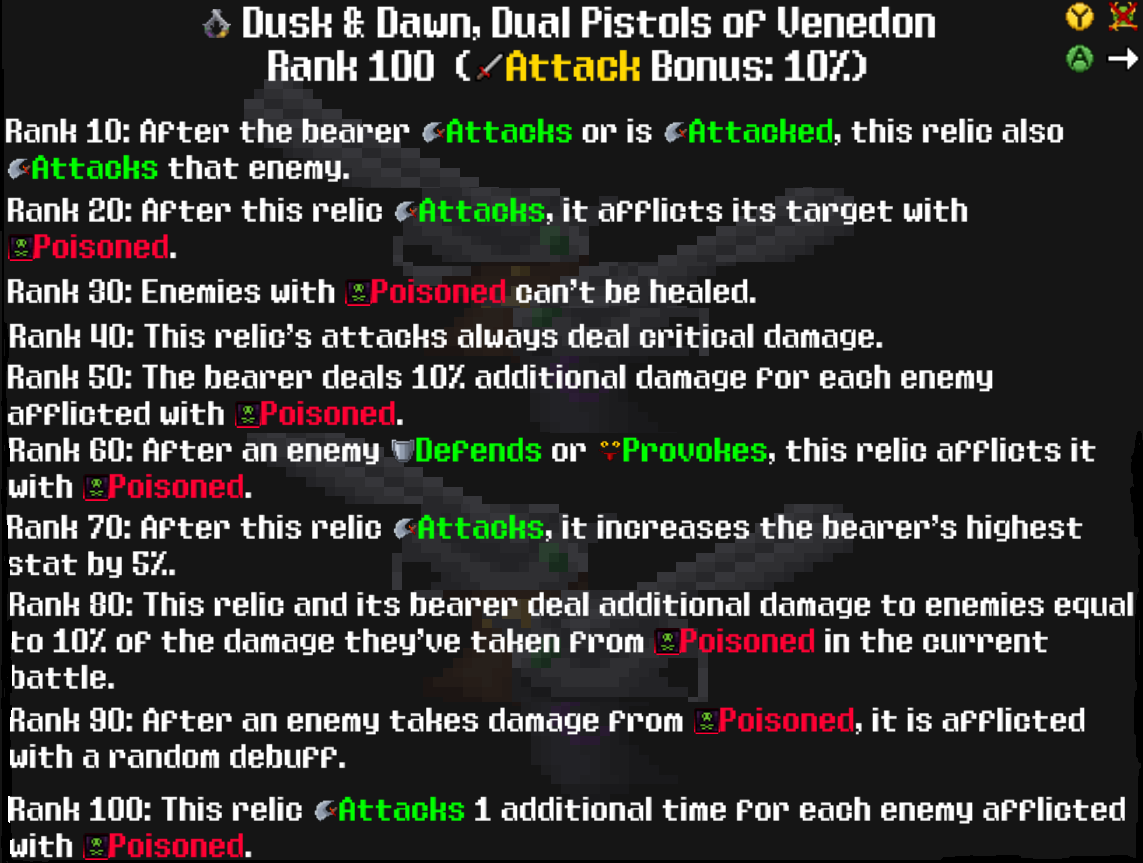 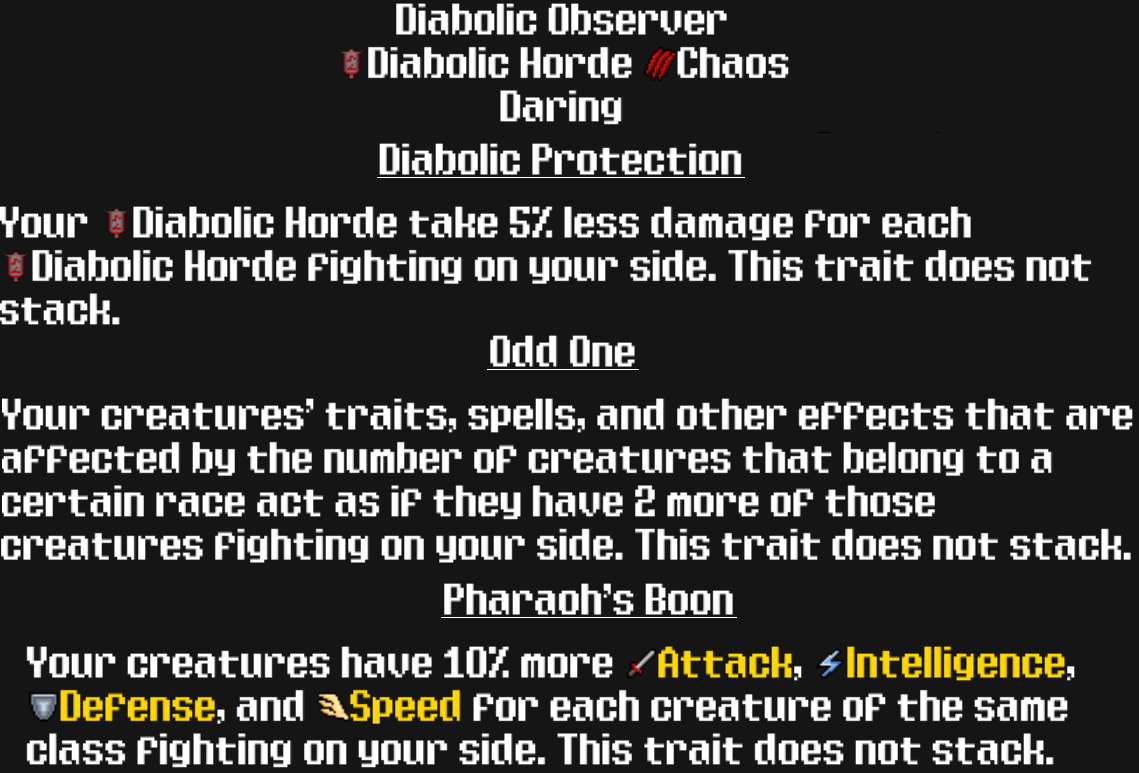 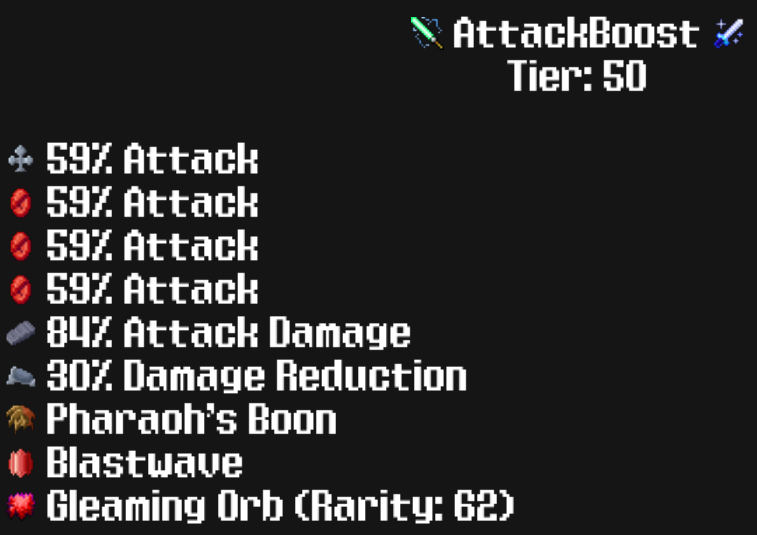 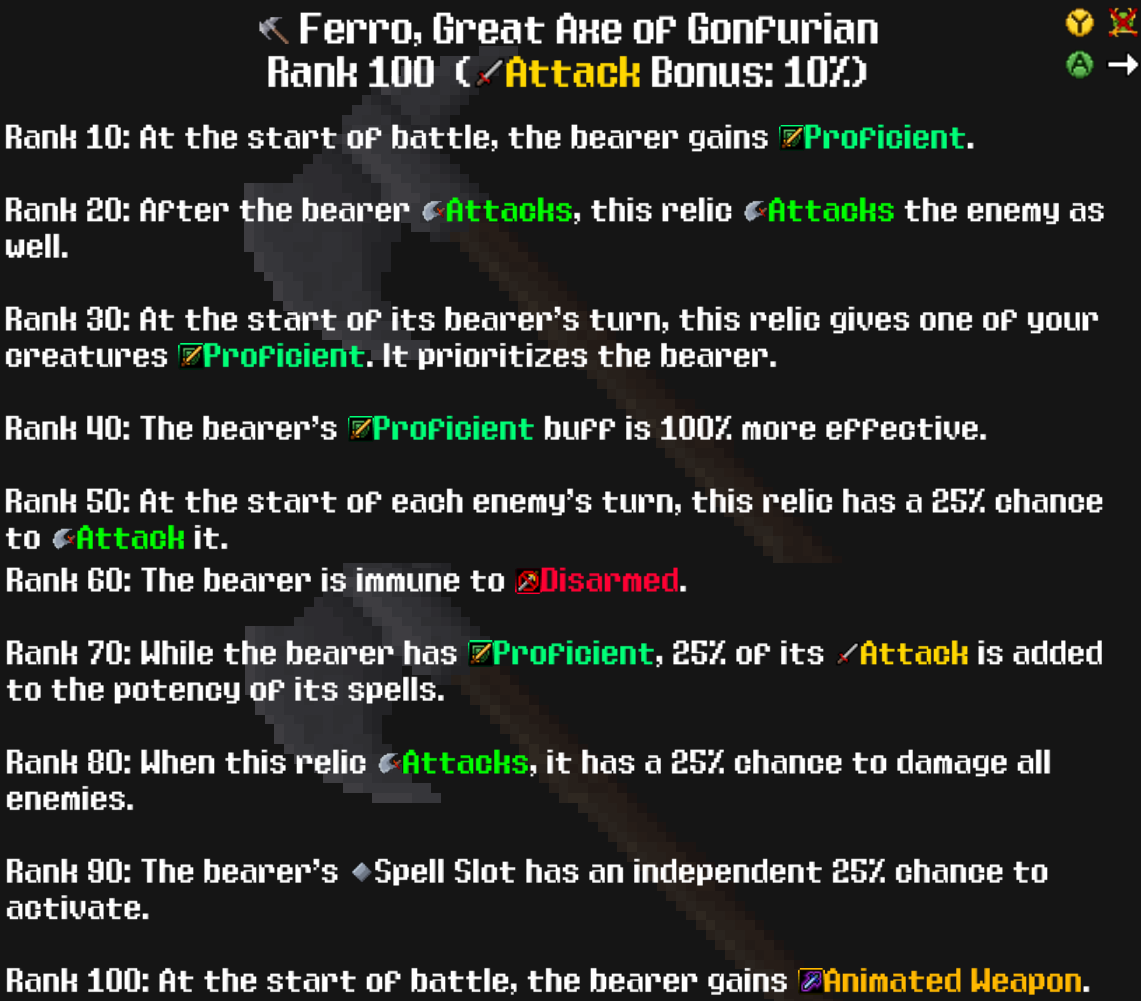 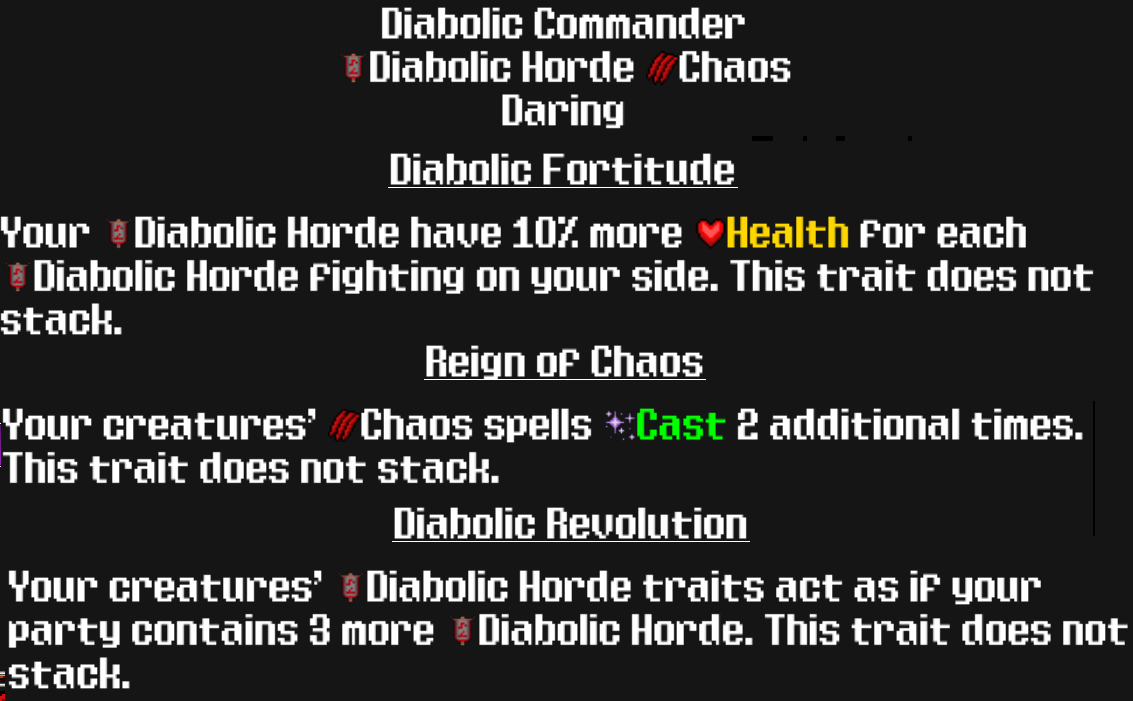 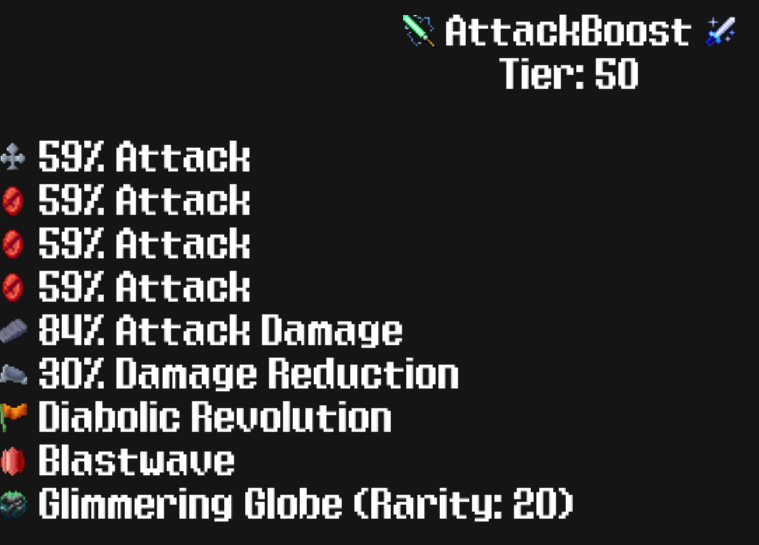 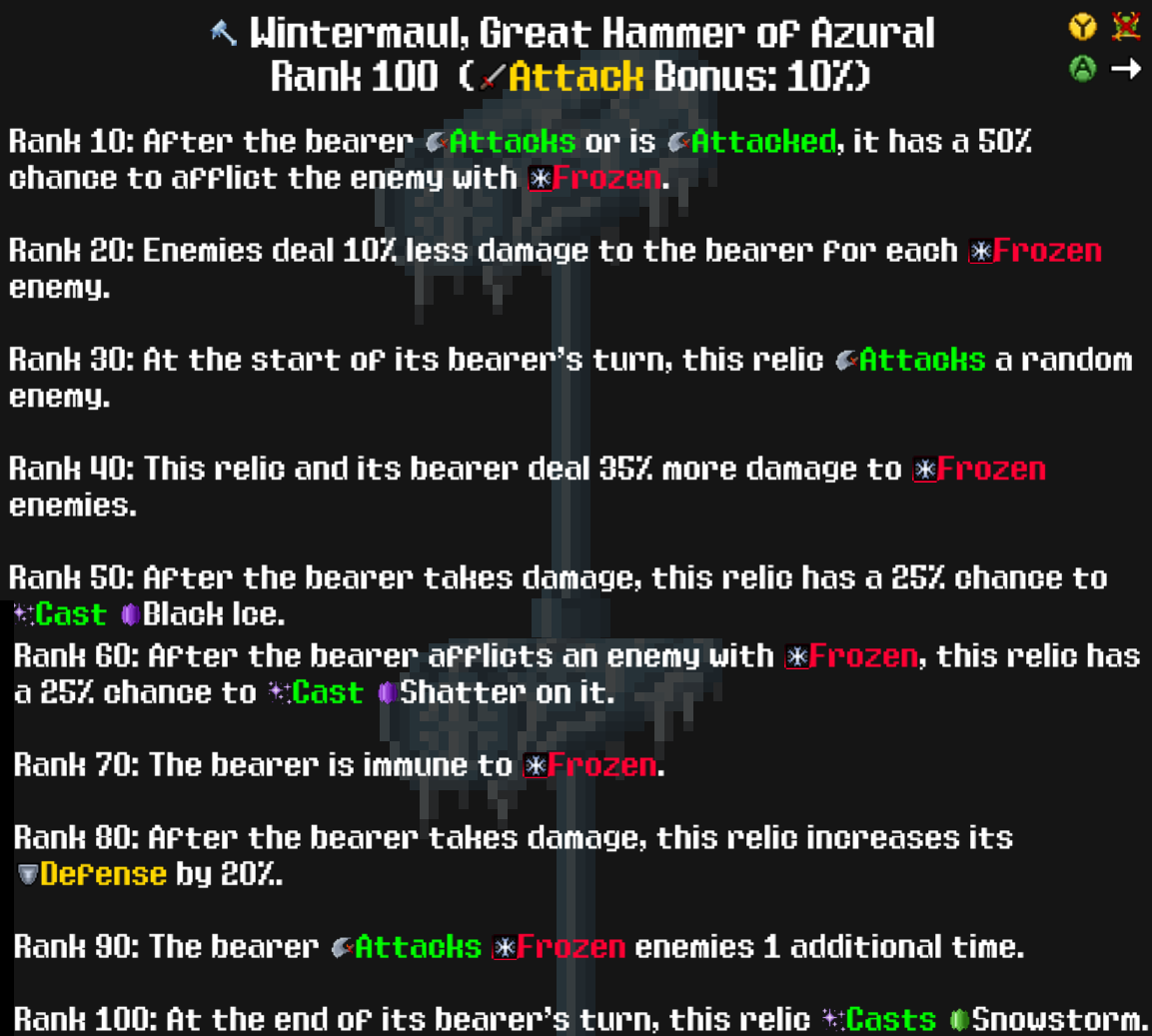 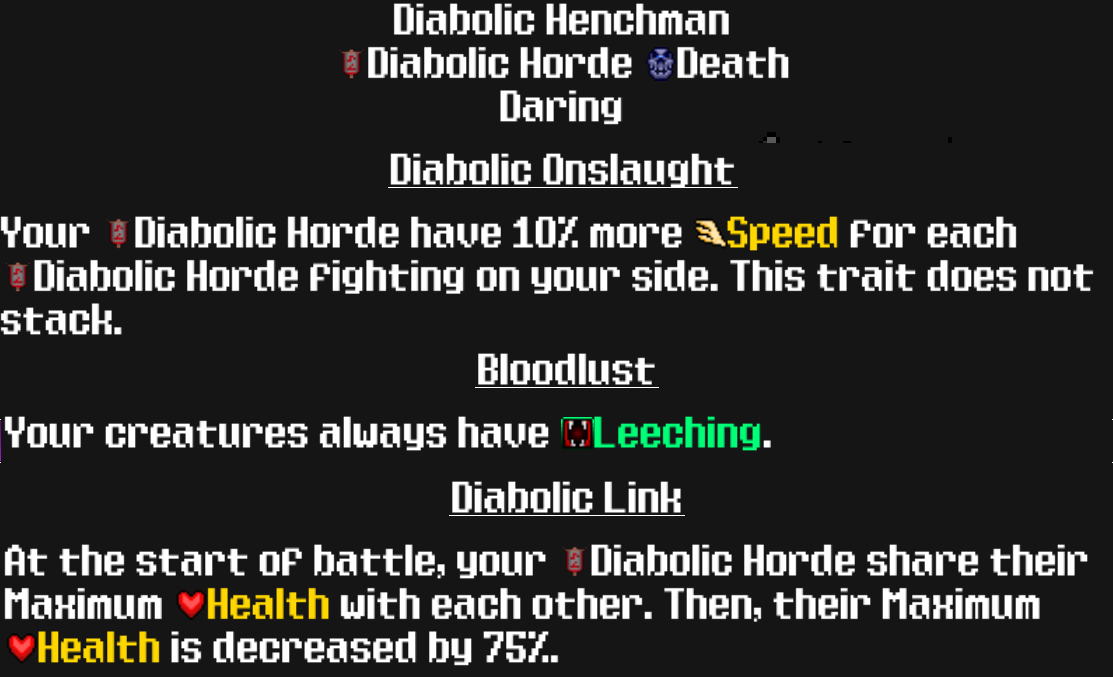 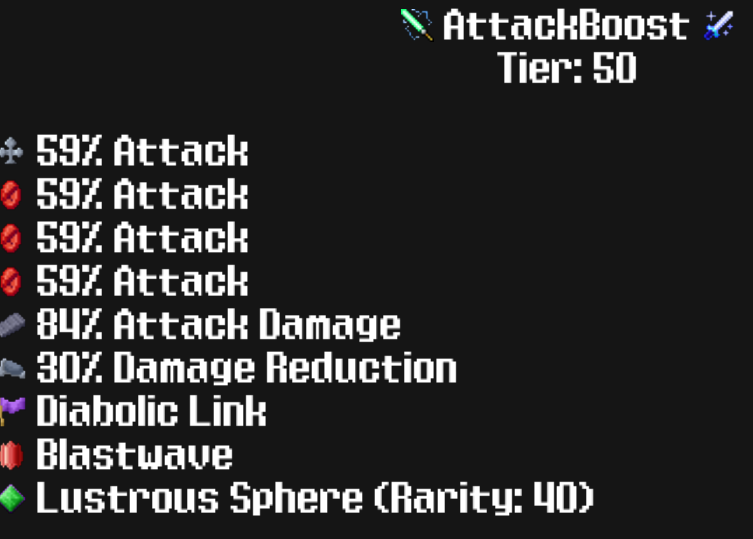 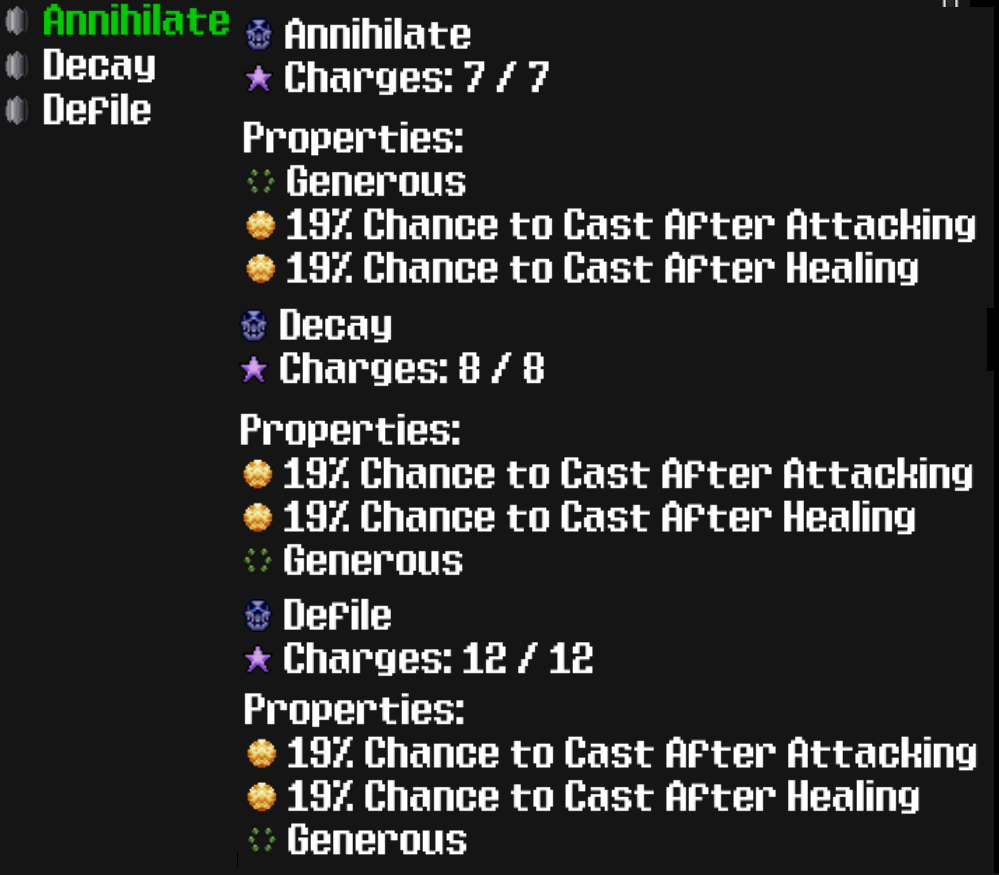 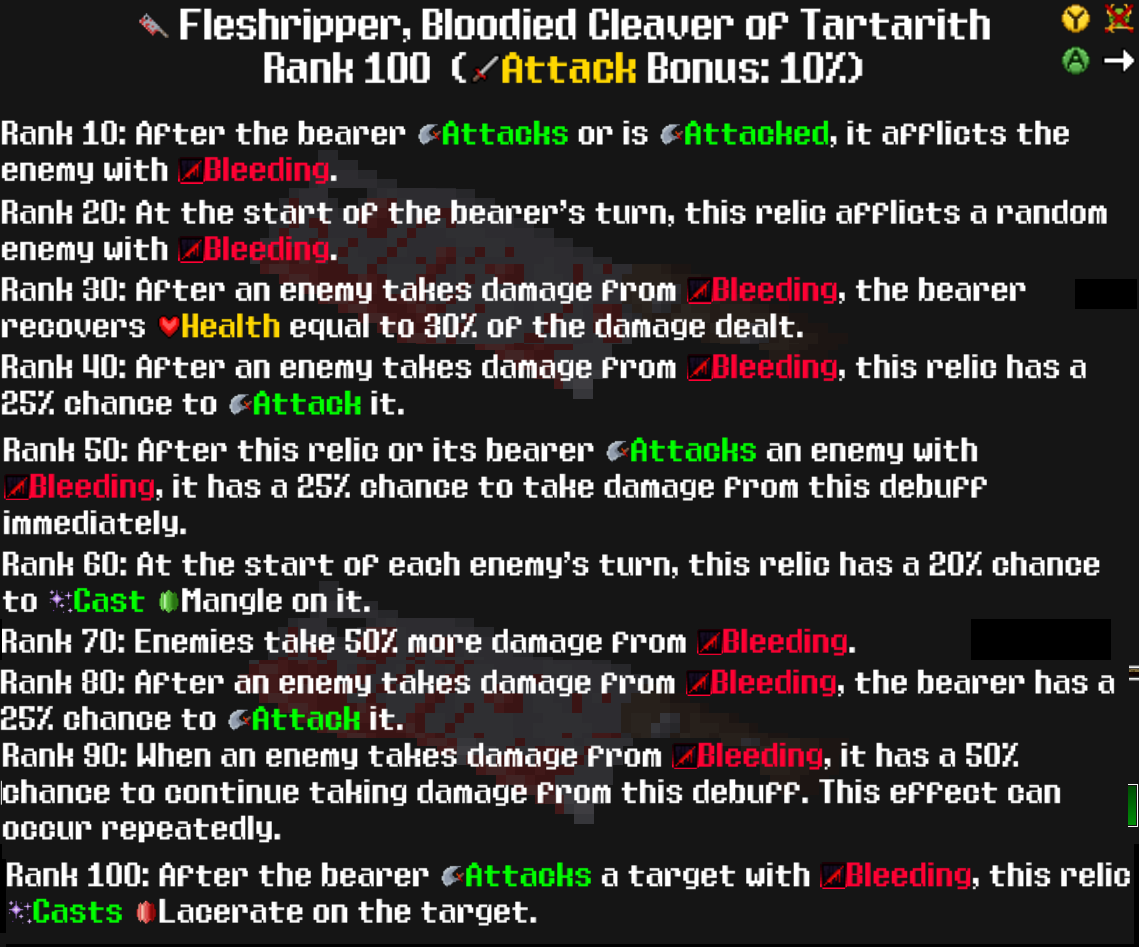 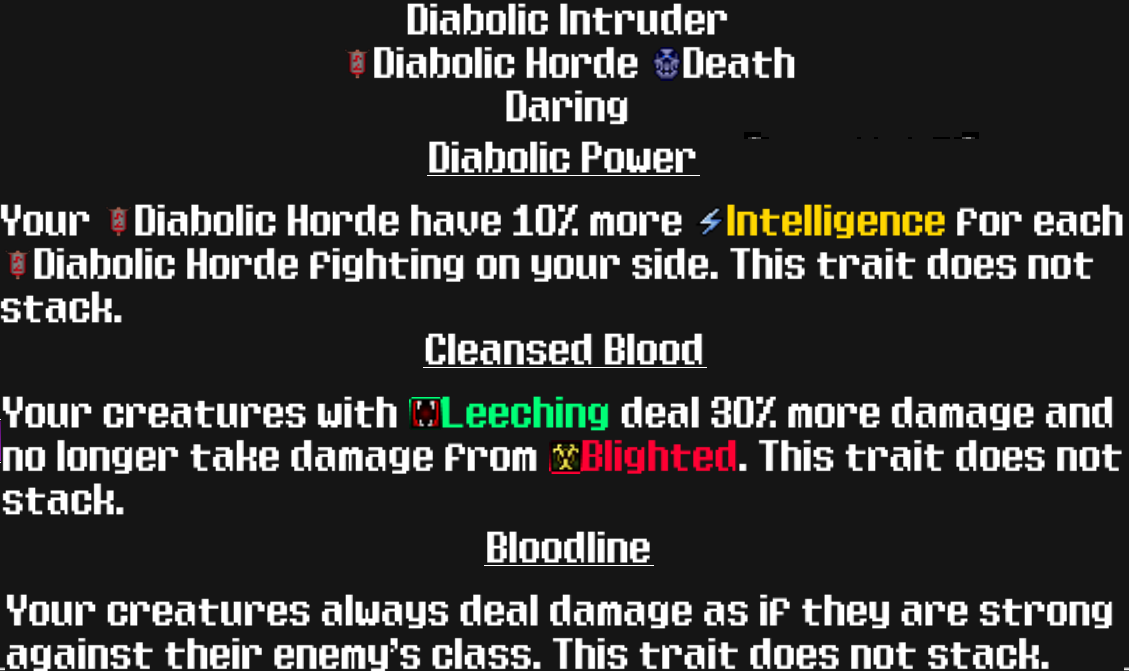 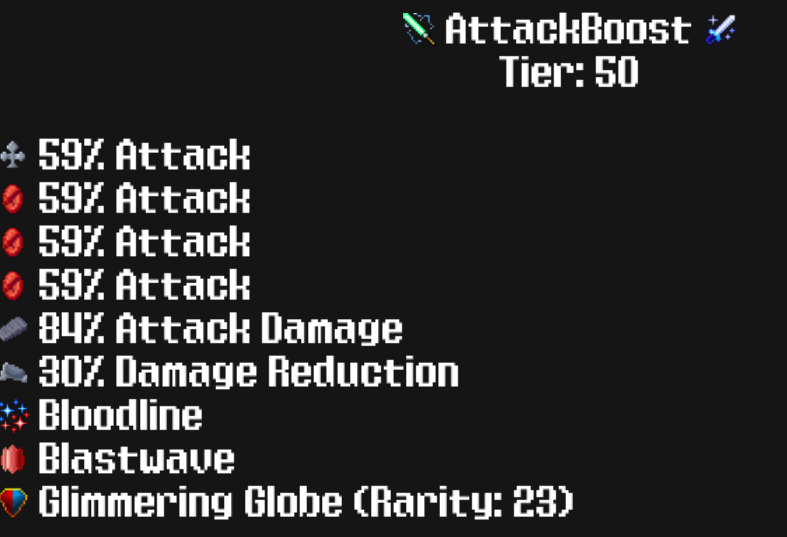 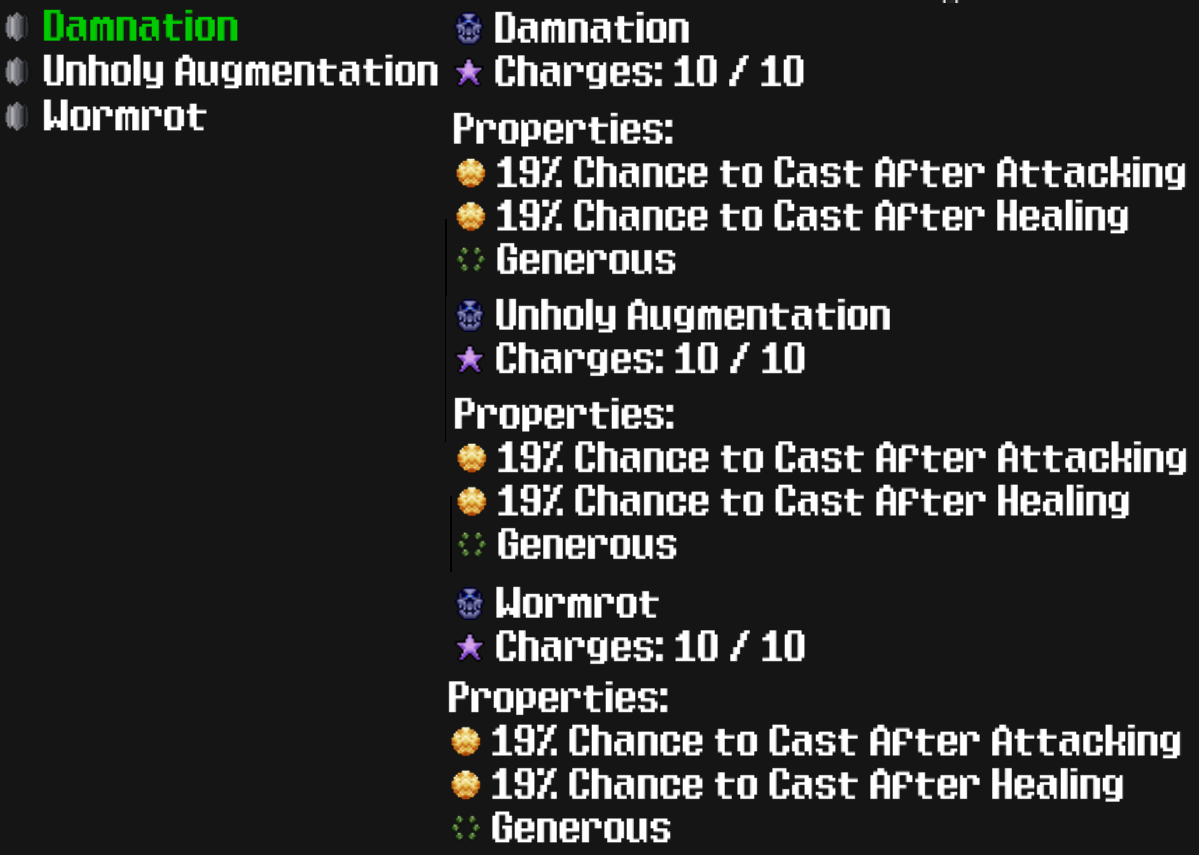 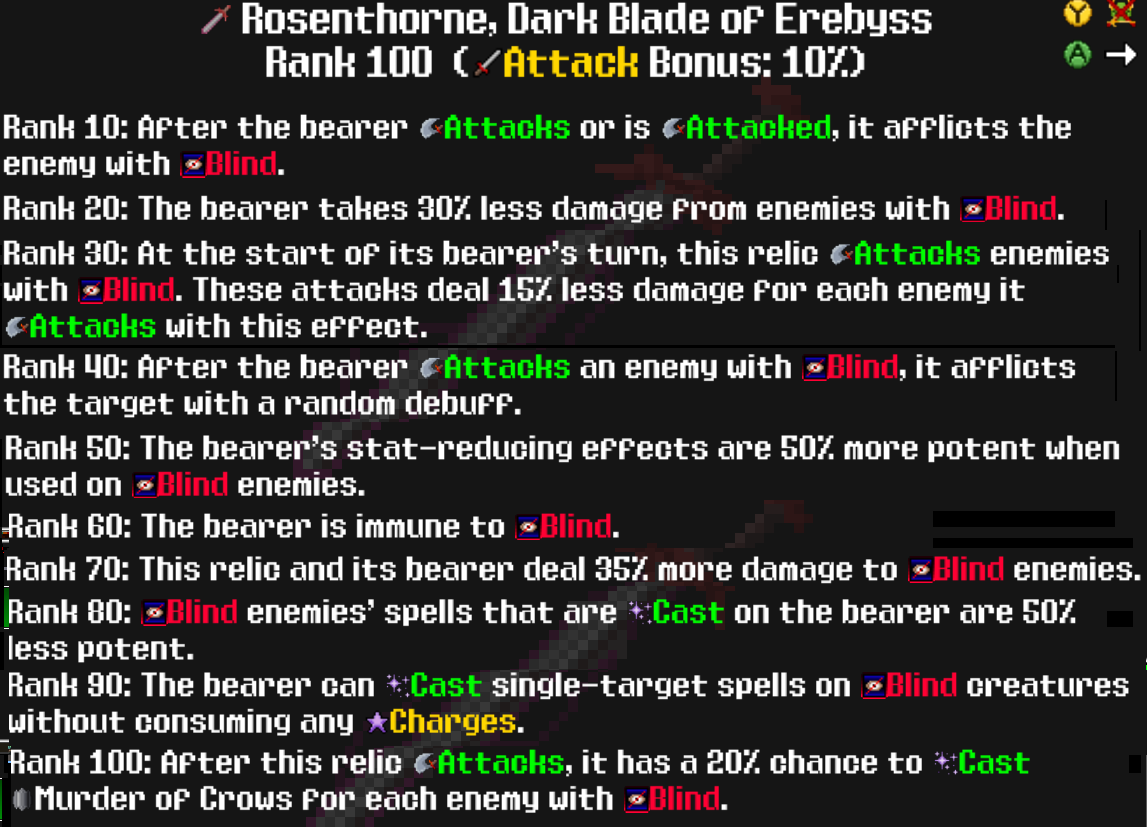 By this point, you should be done with the main story and have Gambling and Relics unlocked. The build really starts to shine after Realm 100+. A small tip: turn on Turbo Mode and Double Movement in Options - Gameplay. It'll cut your grinding time a significant amount. Also, be sure to check my Tweaks and Discoveries section down below. It'll have changes to the build as problems arise while I'm trudging the depths.

We have a Shrewd Personality (Up Int, Down Speed) Diabolic Spectator + Thunder Salamander with an Int + Final Excretion Staff for the Firestorm and Corpse Explosion combo. Using the Triumvir to boost spells even further and add another Firestorm trigger (Prioritize getting rank 30 asap). His spell set is Inner Destruction that casts at the beginning of an enemy's turn, Savage Roar to buff Attack on trigger, Suds to play off our perks to make all our creatures Attack on trigger. 15 Int Scrolls.

We have a Daring Personality (Up Attack, Down Speed) Diabolic Watchman + Sunclaw Gargoyle with an Atk + Celestial Fortitude Sword for AoE Attacking, Inner Destruction, and Damage/Reflect Reduction. The spell gems are the same for all the Chaos based creatures to provide maximum spell charges and triggers. Dusk & Dawn is low priority but adds a debuff and Attack boost. 15 Attack Scrolls.

We have a Daring Personality (Up Attack, Down Speed) Diabolic Observer + Clamorous Cockatrice with an Atk + Pharaoh's Boon Sword for AoE Attacking, Inner Destruction, 2 more race count (11 total for Horde traits), and 40% All Stats (4 Chaos class). The spell gems are the same for all the Chaos based creatures to provide maximum spell charges and triggers. Ferro relic is low priority just an Attack boost. 15 Attack Scrolls.

We have a Daring Personality (Up Attack, Down Speed) Diabolic Commander + Stonehorn Gargoyle with an Atk + Diabolic Revolution Sword for AoE Attacking, Inner Destruction, 2 more Casts on Chaos Spells (Firestorm, Inner Destruction, etc), and 3 more Horde race count (11 total). The spell gems are the same for all the Chaos based creatures to provide maximum spell charges and triggers. Wintermaul relic is low priority for Attack boost and debuff. 15 Attack Scrolls.

We have a Daring Personality (Up Attack, Down Speed) Diabolic Henchman + Oculum Leech with an Atk + Diabolic Link Sword for AoE Attacking, Leeching heals for Cast on Heal, and essentially a 450% Health increase for the team (75% of Combined Health or Health*6*0.75 or Health*4.5). The spell gems are debuffs and extra damage to debuffed with "Enemies" targeting so that Cast on Heal uses them correctly. Fleshripper relic is low priority for Attack boost and debuff. 15 Attack Scrolls.

We have a Daring Personality (Up Attack, Down Speed) Diabolic Intruder + Leech Digger with an Atk + Bloodline Sword for AoE Attacking, 30% Damage Boost, Protection from Blighted, and constant Class damage/defense bonus. The spell gems are debuffs and anti-magic buffs with "Enemies" or "Your creatures" targeting so that Cast on Heal and Cast on Attack uses them correctly. Rosenthorne relic is low priority for Attack boost and debuff. 15 Attack Scrolls.

How's This All Work?

Inner Destruction will hit up to 4+ times per Gem equipped (One on each Chaos creature on your team) at the beginning of an enemy's turn (Spell Gem Trait, Gargoyle, and Thunder Salamander)

All your creatures do AoE damage, always critically strike, Leech, and a Second Attack

All your creatures have access to up to Eight spells each that can trigger both on Attack and on Heal to buff the entire team, debuff all enemies, or both.

Your creatures will all have 85% Damage Reduction by Artifact Tier 50 which, combined with 25% Damage Leeched, makes you immune to reflect Instabilities and also causes Cast on Heal Spell Gems to trigger.

Resurrection on Death Traits and Instabilities WILL drive you crazy. But, they cannot kill you. I've not died a single time since finishing the final build. Not on Gods, Bosses, Events and always running Instability 5. I do tend to skip the resurrection ones though.

I'll be using this section to talk about changes I've made as I've progressed deeper and made more discoveries.

I've discovered that Spicy Suds is not functioning properly at this time. So, I switched those out on my Chaos creatures with Blastwave (Cast Twice, Cast on Attack, Cast on Heal) to get bonus from Firestorm's burning

I picked up a Barbarian Poem and discovered it negates the Resurrect on Death nuisance from Instabilities. Swapped out Final Excretion for it since that wouldn't trigger anymore anyway. Works on everything but bosses and creatures that resurrect due to something other than dying making it great for grinding. No more endless chain spam or having to skip resurrection instability rolls.

I noticed Blastwave and Acid Rain weren't doing enough work on my Artifact spell slots and also that charges don't matter. Swapped out for Rapture, Cruelty of the Wild, Firewall, Sandstorm, Pestilence, and left one Blastwave. This stacks up some nice debuffs and plays off them. Rapture on the first creature since its Firestorm + Triumvir combo has him casting his Artifact spell before combat and it's the most severe.

I haven't figured out a viable way to replace the two death creatures. Their healing trigger and debuffs are just too powerful for extended fights and some instabilities. That's my next goal though.. trying to find viable replacements. Obviously, the traits I can switch between weapons and fusion but the spells are practically irreplaceable.