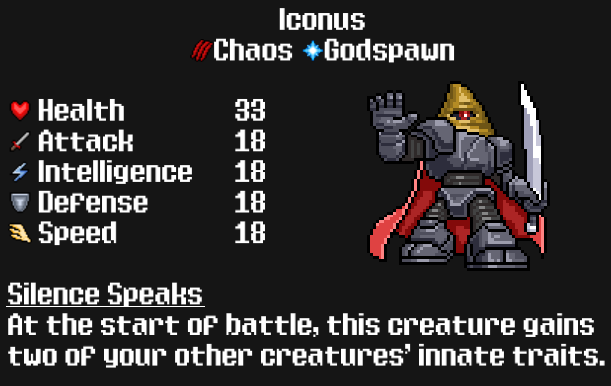 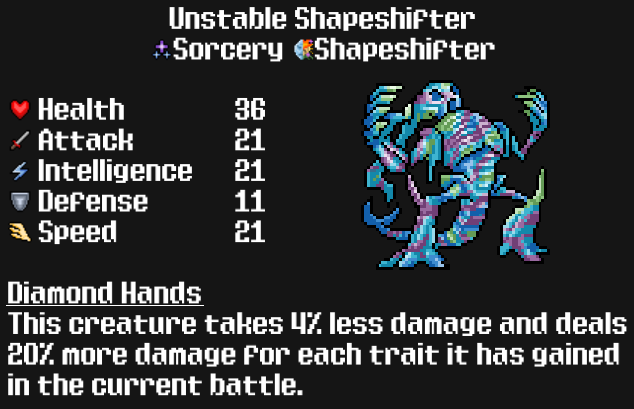 Iconus and Unstable Shapeshifter were made for each other so here's a showcase to show their potential, some anointments are required to make this a bit more efficient so late game is a must.

How the Team will Work

1. Using both Mimic and the astrologer anointment Ascendant, the team will have 2 guaranteed members moving first without any speed investment. Turn 1 we will be casting Death Siphon on our reaper, to give Iconus our first snowballing trait on top of some additional stats.

2. Reaper will be revived with a chance to gain another turn to do whatever you please, if not, Mimic will move next, cast wormhole to the Doomguard. Then, cast wormhole from Doomguard to Iconus, Doomguard will die due to Last Word with him provoking at the end of your turn, giving your whole team his beefy stats and lowering enemy stats at the same time. Mimic's Manticore Decimator trait then gives your whole team a hefty attack boost from that as well which in turn also lowers enemy attack.

3. Iconus is now primed, boosted with Soul Reaper, you can choose to harvest your own team for some extra traits + damage or start killing enemies. Fallen carnage is a great target if you hadn't already received its trait from Iconus's trait already. 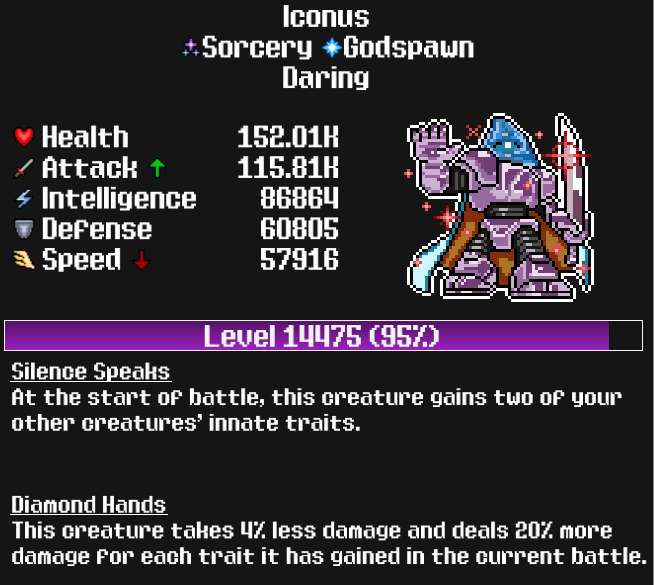 The star of the show, the late game engine, Iconus. Will be getting stronger with each trait he grabs so use Soul Reaper's acquired trait to its fullest!

With Apocalypse, there is no difference between killing ally and enemy, you HOPE you kill an ally to potentially get your Misery perk to proc, casting Murder of Crows for free along with getting a new trait with Beautiful Sorrow. Wormhole for team versatility.

At the start of battle, this creature gains two of your other creatures' innate traits.

This creature takes 4% less damage and deals 20% more damage for each trait it has gained in the current battle.

After one of your creatures dies, this creature gains their innate trait. 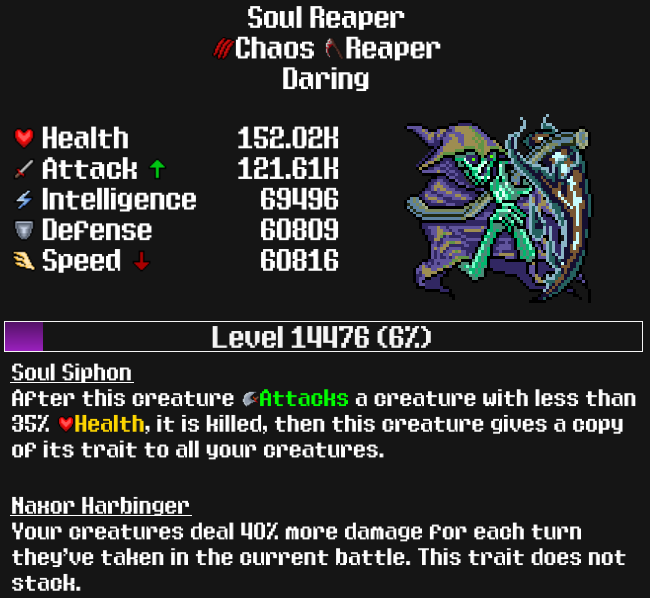 An essential trait to help Iconus snowball your team even further, with an Apocalypse attached so longer battles become much easier.

After this creature Attacks a creature with less than 35% Health, it is killed, then this creature gives a copy of its trait to all your creatures.

Your creatures deal 40% more damage for each turn they've taken in the current battle. This trait does not stack. 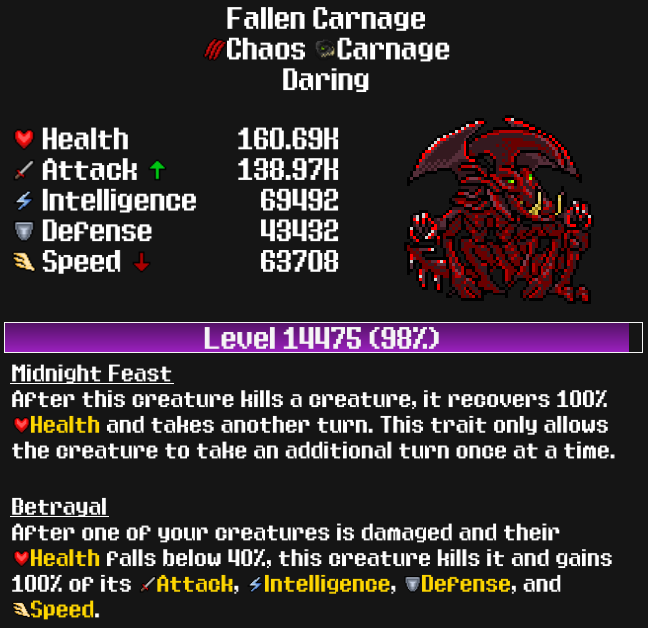 Fallen carnage has an extremely powerful perk for Iconus to sweep late game, Carver Heartseeker to help grab more stats and setup a potential backup sweeper. Any stats he does gain, the enemies will lose. Whenever Betrayl procs, you'll actually revive your whole team with Lifebinder on Angelic Voidlord.

After this creature kills a creature, it recovers 100% Health and takes another turn. This trait only allows the creature to take an additional turn once at a time.

When one of your creatures is damaged and their Health falls below 40%, this creature kills it and gains 100% of its Attack, Intelligence, Defense, and Speed.

Trait Slot: Blessing from Below

After this creature gains stats other than Maximum Health, enemies lose 25% of that amount of the same stat. This trait does not stack. 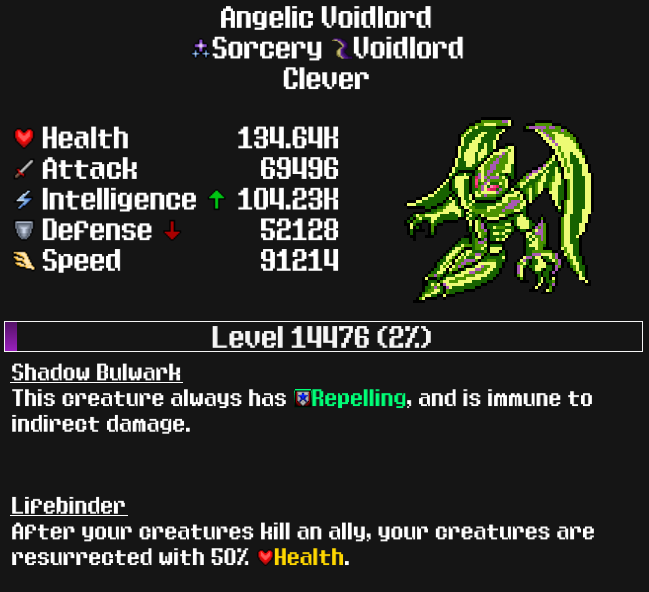 Of course Iconus wants Shadow Bulwark! Who wouldn't? This is also a lifeline for your team with Lifebinder, giving your team some longevity.

Helmet with full health investment and damage reduction so you take advantage of the astrologer anointment making you at the top of the timeline.

This creature always has Repelling, and ignores damage that isn't dealt by attacks or spells.

After your creatures are resurrected, they have a 50% chance to be placed at the top of the Timeline. This trait does not stack. 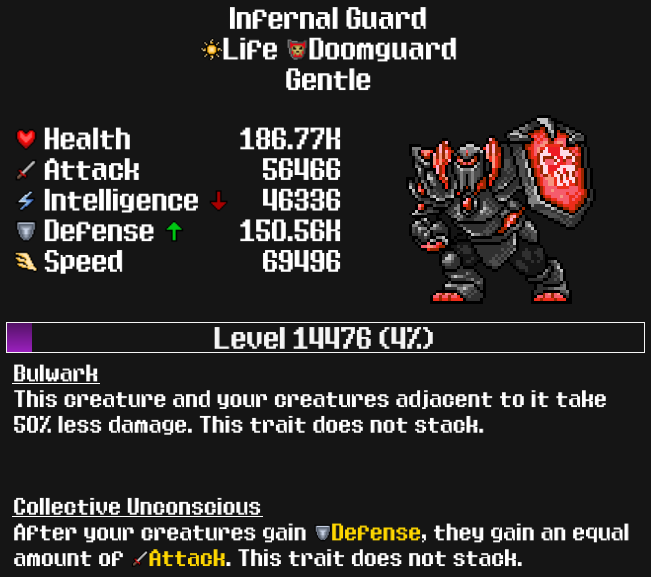 A support tank built to just help you get into the game comfortably, set it up next to Iconus and your preferred teammate for 50% damage reduction.

This creature and your creatures adjacent to it take 50% less damage. This trait does not stack.

After your creatures gain Defense, they gain an equal amount of Attack. This trait does not stack.

This creature always has Taunting, and it takes 50% less damage while it is Provoking. 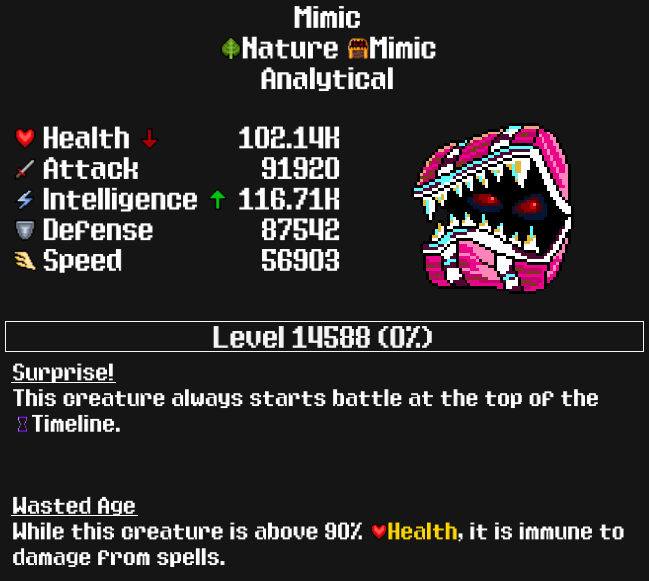 Another first turn for you, immune to any spell cheese that may come its way. Honestly Mimic is somewhat of a filler creature, so consider the trait and this whole creature slot a WIP.

This creature always starts battle at the top of the Timeline.

While this creature is above 90% Health, it is immune to damage from spells.

After your creatures gain a stat other than Attack, they gain 50% of that stat as Attack as well. This trait does not stack.

Pay attention to when betrayal procs, stats will be flying all over the place so keep track of who's boosted.

Paying attention to what Iconus has at the beginning of the match can also change how you play the battle from the start, whole this isn't incredibly important since you can follow the steps at the beginning and win, it will help you understand what he can do early on.

Sabredodo came up with the whole team, so all credit for the team goes to him!

Orbit49 for just putting together the guide, was fun to make!