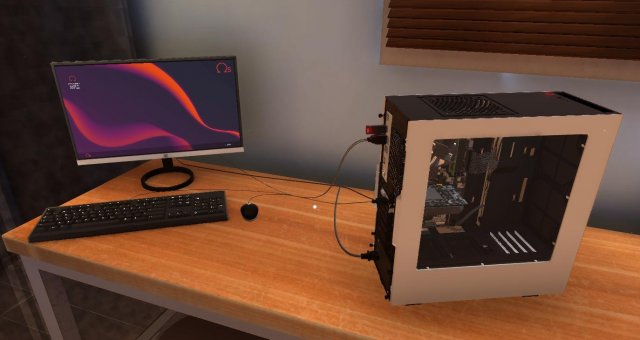 Basic tips for someone who just started playing the game.

Diagnose & Fix jobs should be your primary (probably only) jobs until you get some levels. These make steady money, familiarize you with the game mechanics, and get you the levels you need to get the perks that make disassembly and reassembly of computers easier (Auto Cable tool, Auto Screw tool, etc.).

It's a good idea to keep some basic (working) components in your inventory for testing purposes to keep you from having to completely disassemble a computer to find out if components are broken. At a minimum these should include a power supply; a CPU cooling fan; CPUs for Skylake*, Coffee Lake, AM4, TR4 motherboards (when available); and a stick of memory (RAM), type doesn't matter. If during computer disassembly you find a broken component, temporarily replace it with one from your inventory, and try to power the computer. If it powers up fully to the operating system with no errors, no more disassembly is needed. That is the part that needs replacing.

Be wary of upgrade requests that ask for a particular 3D Mark score. Some of these can lose you money if you complete them. You can take them for evaluation without penalty, though. If you find the upgrades would be too expensive, simply reassemble the computer with the original components and then click the quit button on the job's email.

If PC Status is saying "Missing cable(s)” and cable mode (3) shows you nothing, you probably need to reinstall the front panel of the computer. Counterintuitive, I know.

If PC Status is saying "Incomplete case” but all the case panels from the PC Parts tab are installed, you probably need to close or install the PCI Lock where the graphics card(s) attach to the case.

Some new PC jobs are part of a recurring narrative where the PC will be sent back to you for repair or upgrade. Keeping this in mind when building a new PC may help in the future. Providing a larger power supply than you need or a motherboard that supports SLI/Crossfire, needed now or not, may help with possible future upgrades to the machine you build, and they aren't that much more expensive.

Remember to turn off lights and computer(s) before ending the day. This will reduce your monthly electric bill. I can work on computers without the lights on, using only the light from the windows and the small lamp you can't turn off. I don't know if this reduces your electric bill, though.