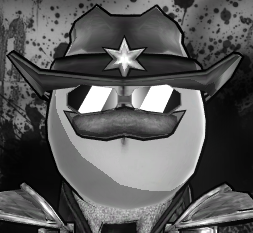 About The "Arena Mode" [So, you have finished the story mode.

You want to make your own killing machine, eh?

Then you`d better buckle up those pants, cause it is going to be a bumpy ride.]

Arena mode, unlike the 'first ver.' of madness project nexus, it is more of a Second Story Mode. of the game.

There are episodes(missions) you can unlock for playing throughout the game, and like the main story mode you can change each difficulty.

Each missions have Waves that you have to clear to unlock other levels.

The higher the waves count, the stronger versions of enemies will appear in that round.

But instead the wave bonuses give you more cash and xp when cleared.

If you die or fail on a ongoing wave, you will lose all of the progress on 'xp' and 'waves'.

However after finishing a wave, you can choose to continue or safe-quit(escape) by leaving the mission.

[Tip : The last wave doesn`t really need to be cleared to unlock the other levels, but will give you the most xp and cash.

And you can continue waves infinitely until you die or safe-quit.]

Combining the harder difficulty and higher waves gives you the most xp and cash.

So, some missions like 'Slaughter Time' , and 'Murder Room' are the good missions to farm as high difficulties.

By starting the arena mode, you will face the hardest level of all.

And the level is called, [Picking Your Origin & Name].

Starting off, you can choose between 5 origins.

(Don`t worry about the unchoosable origins for now. We'll talk about it later.)

I will simplify each origins and its down & upsides.

(++) No downgrades means you can upgrade stats very fast and evenly.

(-/+) It has nor downgrades or upgrades.

(+) Special lets you bypass enemy detection where 'agent(Sun-glass sandbags)' enemies are present. However when you attack, all enemies will recognize you as normal.

(++) Unarmed damage +2 is really nice. Its hard to have increase damage on unarmed without gloves.

(-/+) There are only a few enemies with fire-sourced attacks. Not really a big downside.

(- -) You cannot get stats by unlocking ranged skills. And ranged skills are by far the easiest skills to upgrade.

(+++) Cash bonus is nice. Lets you buy more stuff from start from end-game.

build...sooo wasn`t a big deal to me.

(+) Press "Shift" when you perform takedowns on enemies(costs money). The 'bribed' enemy will disappear after the wave. (It`s funny if you make the half-mag become your side(lol).)

(- -) Max hireling level -5 is quite bad. And even crucial if you want to speed-up the game. But in the end-game when your level is far superior than your hirelings, it isn`t a big deal.

(+) Special gives you a ghost friend when you are on 1 corpas health. He(or maybe she? Idk.) teleports around the map and auto attacks enemies. It also performs takedowns so its really nice when you`re in a pinch and can`t reach a stunned enemy.)

(+) Dizzy resistant is... ok I guess. Doesn`t effect gameplay that much(from my experience).

Once you have picked your origin and name, you can`t change it until you restart the game.(In case of the name, you cannot change at all) So, choose it wisely.

There are four stats in the game, and each stat gives you better chance or capability on things.

To be simple, each stat upgrade does the following.

Strength - Lets you wield heavier weapons with both hands. Not with really-heavy ones.

Dexterity - Lets you run faster, and get bigger tac-bar.

Each skill upgrades need 'xp points', and of course dealing the correct weapons will give you the right points.

I will simply tell you how to gain these points easier for now.

Unarmed - Punch enemies with your fists. Gloves bought from quatermaster gives you additional damage to fists.

Melee - Slash or smack your enemies with melee weapons.

Ranged - Shoot at enemies. The easiest skill to get points.

Acrobatics - Dodge spam, or throw weapons and throwables(Rocks/axes/grenades/etc.) at enemies.

[Tip : Your weak skills of origins don`t give you any stat bonuses! Remember that.]

[Tip 2 : It is better if you evenly upgrade each skill, for there are moments you are kinda forced to use other weapons too... But for me, I only go pewpew with two 6-magazined miniguns.]

Even I still have to spend at least 4~5 hours to get reach the end game.

However there are some ways to reduce your precious time through the start~middle gameplay.

[1] Force yourself on tough difficulty on some levels

- Sleepwalker Training Program(Madness difficulty is also quite nice) : Wave 1~4, Just backpaddle and simply melee through the enemies. Throw rocks at the gun-man and the giant. Not worth it over wave 5.

- Pit Stop(Madness difficulty works if you have decent aim and lots of ammo) : Enemies get auto-stuck on the left side of map. Peak-shoot at them while minding the incoming enemies from right.

- Slaughter Time : Very-very easy if you have strong ranged weapons with lots of ammo. Strong enemies appear on top of the map, so standing there is recommendable.

- Murder Room : Easy if you have ranged weapons and lots of ammo. Don`t stand on trapdoors when its red. Better stand on high-ground. Become Obi-wan.

Throughout the game, quickly obtain the Dual-weapon : light skill. You can dual wield 4 pistols at the start of the game after that. Simply press [Shift] while equipping the second weapon in your off-hand. You can press [Tab] to switch your weapon.

Some armor like the Agency HalfM Suit or the Toolbelt gives you extra magazines. This affects EVERY SINGLE WEAPON of that kind. Means +1 magazines gives +4 magazines if you have four pistols in your hand. (I will tell you about this again in the middle&end-game guide.) You can also buy these from the quartermaster.

It might be obvious, but don`t buy crappy weapons.

Melee weapons like wrenches and electric-batons are easily obtainable mid-mission, and guns like 'nail-guns' are just simply down-right scam towards your face. Trust me. Saving money will give you better access to stronger weapons which I`ll explain in the next guide.

If you are going to be a meme lord however, be my guest. (Scrap dagger, Trash-can lid, Horseshoe Hair, Street tough shades, lip, Glow stick necklace...)(The hardcore panty-man in Nevada)

I am currently searching other people to help me making a full arena guide. (Later for mid and end gameplay too)

Or simply replying on this guide will be nice too.

Your support will be truly welcome!!

Each and every support(even a nice reply or message) will mean a lot to me.