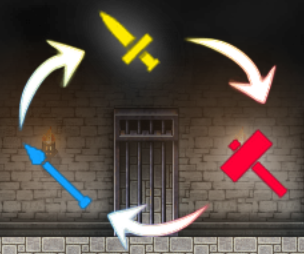 Once you see the rotating skills menu, Karryn is in a battle state.

This game has three stances: Blunt, Slash and Pierce. Each enemy can be in a specific stance, making them the weakest against one attack type. Karryn can also be in a stance where she has the least resistance to a particular kind of attack. Players can find what stance she is in beneath Karryn's stamina bar. Each opponent and Karryn have a chance to switch stances for every turn.

Karryn learns through experience, and experience earned in this game is tied to what move(s) you do within a turn and what actions are done to Karryn. These move types are then accumulated at the end of a battle which calculates what stats level up. There is no traditional EXP bar. Keep in mind that if you'd like to focus on building a particular stat, you need to use it the most often to efficiently level it up.

There are currently up to 4 side-jobs (mini-games) that players can experience in the game. Specific actions done during side jobs can increase certain stats.

Increased slut level reduces Karryn's Charm. Charm is a stat that reduces an opponent's pleasure threshold, making them easier to be defeated through pleasure. Their pleasure bar can increase whether Karryn directly gives pleasure or not. This means that from every turn, their pleasure bar increases. Once it reaches max, they will ejaculate and either leave or stay, depending on their resilience.

Like Karryn, opponents have a Stamina (Health - orange/yellow) bar and a Pleasure (pink) bar. The fundamental difference is that opponents never experience stamina reduction from acting offensively or sexually.

Karryn can subdue opponents through combat or sex.

Control is determined by the following:

The difficulty level you start with.

Control can either reduce (minus), increase (plus) or have the fort's Order remain the same (neutral/zero) the next day.

A floor under Anarchy can be Subjugated by defeating its boss.

Subsidies are funds provided by the empire. Players can manipulate how much they earn daily by increasing or decreasing Order, earning titles, subjugating floors and enacting edicts.

Fatigue disadvantages Karryn, as she can have reduced status, making her less reliable in battles. Karryn can gain fatigue from battle waves and side jobs depending on the duration choice. Once Karryn reaches 55% fatigue, she cannot run away anymore in Secretary and Warden difficulties.

The Frustrated status increases her attack but decreases her defence, agility, accuracy and critical evasion. 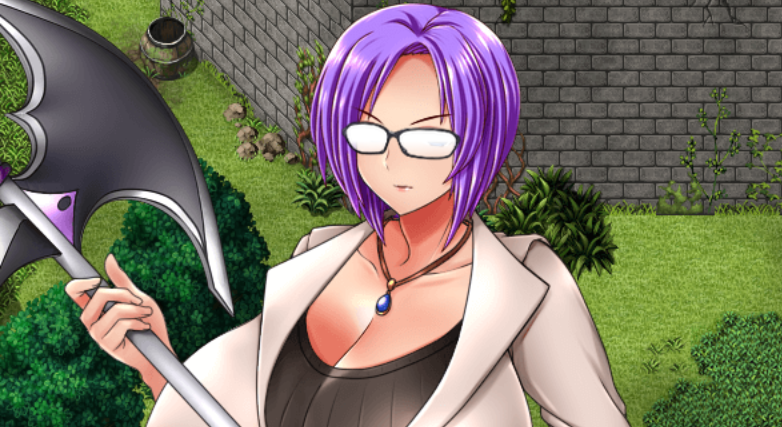 Focus on the following to level up Strength:

Take Hit - She has an increased chance of raising Strength if she is not down (run out of stamina) or having sex.

Focus on the following to level up Dexterity:

Kissed - How much experience she gains is determined by her dexterity level over enemies and if she has Stamina or not.

Receive sex - She gains more dexterity experience if she still has stamina.

Agility affects Karryn's ability to evade, her chances of grazing an opponent rather than completely missing and increasing her act chance. Like any turn-based game, the Act Chance element determines who can do what first in a single turn. If her Act Chance is far higher than others in the wave, an opponent might skip their turn and only have the chance to act in the next turn.

Focus on the following to level up Agility:

Grazed - While Karryn still has Stamina or not having sex.

Focus on the following to level up Endurance:

Allow Drinking + Drink during the waitress side job.

Take damage while still having Stamina.

Get spanked while still having Stamina.

Karryn is f*cked while still having Stamina.

Karryn is petted while still having Stamina.

Receive Pleasure from toys while still having Stamina.

Focus on the following to level up Mind:

Eye of the Mind.

Opponents that encounter Karryn with high Charm will make them easier to receive Pleasure Damage without the need for Karryn to do any sexual acts to increase their pleasure.

Focus on the following to level up Charm:

Handshake ☑ Accept Request - Visitors at the receptionist's side job will ask Karryn to shake her hand.

Swallow - Waitress side job. When Karryn is drunk enough, she will be brought to the table to swallow a mug of c*m.

Flash - Patrons will ask Karryn to flash herself during the Waitress Side Job.

Focus on the following to level up Stamina:

Receive damage - How much EXP Karryn gains is determined by whether she has Stamina or not. This includes taking (stamina) damage from sex.

Grazed - From an attack.

Energy is required for using certain skills and can determine a battle loss. If Karryn has no Stamina left, she can still be in battle as long as she has Energy. If Karryn loses all Energy, she will be taken to a defeat scene. Each orgasm Karryn has in a single battle can reduce her maximum Energy.

Focus on the following to level up Energy:

Breathe - Available after orgasming and receiving the Bliss status.

Thank you for your time whilst reading this guide. I have other Karryn's Prison guides written up too!

I do English creative writing as a hobby. Would you like to support what I do?