Squirrel Wrangler "Win a battle with damage from Squirrels".

There are 3 ways to get this achievement:

1.- In order to do this you`ll need the squirrel head totem located at the bottom right of the slide puzzles in the cabin.

Then you`ll visit the old woman and wait until you`ll get either the wolf cub sigil of growing or the porcupine sharp quills.

2.- Another way is putting an Alpha card next to the squirrels in order for them to gain +1 attack

3.- Lastly if you get the amalgam, since it has all the tribes,it counts as a squirrel so is another option aswell.

Gruesome Encore "Allow the Mycologists to experiment on a creature that is already itself an experiment".

The mycologists might start to appear in the second stage after you defeat the prospector, but more common at the third stage after the angler.

You`ll need 3 copies of the same card to get this achievement, just focus on picking the cards you already have.

Also if you land on a backpack icon and you have all 3 items, you`ll get the rat pack card, this happen everytime so is a sure way for getting the 3 copies.

Role Reversal "Steal back one of your creatures from The Angler".

In order to get the hook necessary for the achievement, you need to defeat the angler once, and then lose at any point after it. At the start of the next run, you`ll get the hook.

To get the achievement just drag back any creature of yours that the angler have pulled on his side.

NOTE: you can do this achievement on the angler fight and in Leshy`s final boss fight when he plays as the angler too. 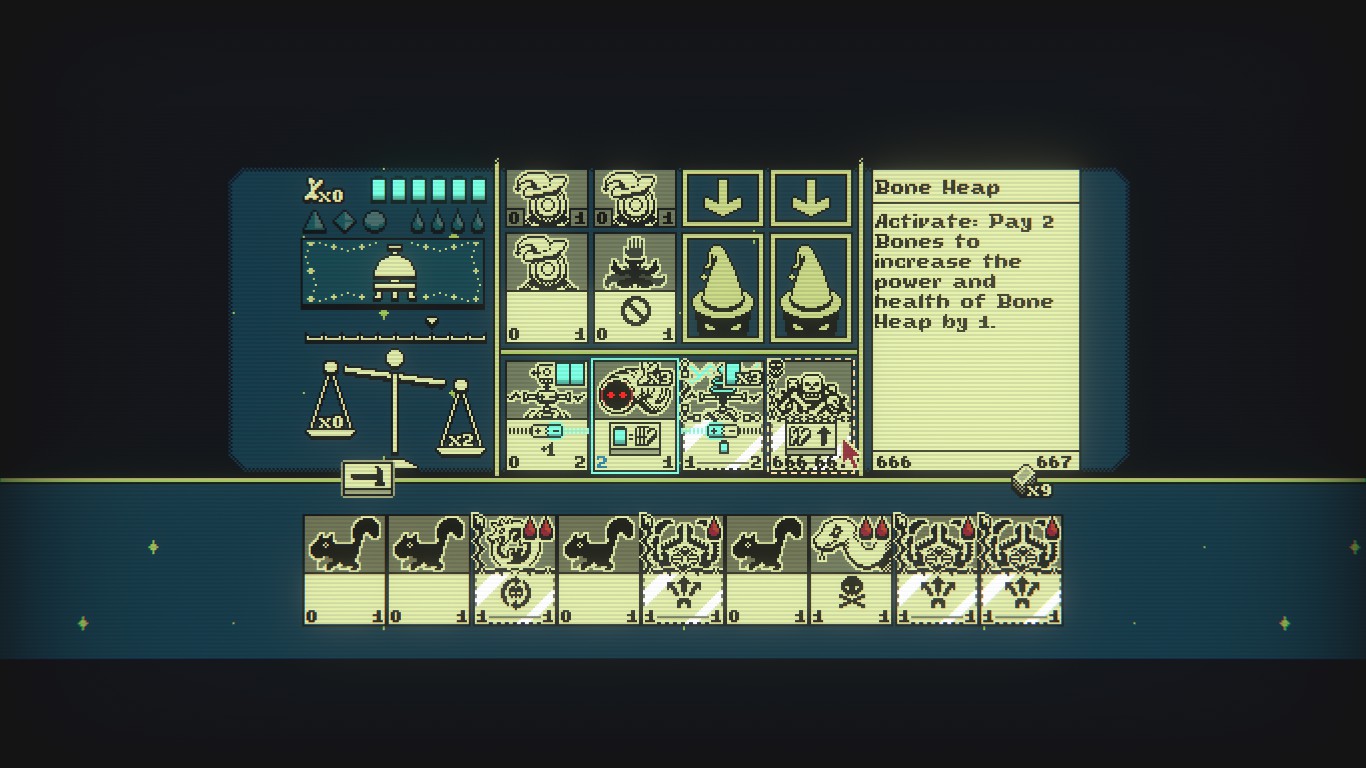 Collective Effort "Collect every card in the Original Inscryption".

Just play through all the act II and open all card packs that you found, after beating the 4 scrybes, go to the trader and buy a couple of card packs to get the missing cards.

You also need to go to the mycologists which are located between Leshy`s and Grimora`s islands,

give them all their required cards they ask and you`ll get the achievement.

Note: You can use the compendium at the magiscus tower to see which cards you are missing out.

Dark offering "Make an offering to The Bonelord."

After you have them both on your deck, place them together and sacrifice them, you`ll get the necessary piece for the offering. I suggest doing it on the dummy battle.

The offering is made on Grimora`s island at the tomb.

Devil's Play "Attack for over 666 damage in the Original Inscryption."

We are going to need the following cards:

After you made the dark offering achievement you`ll get the "bone lord" card, which gives bones at the cost of bateries, we are going to make a set of infinite batteries in order to farm bones

The following image shows how you are supposed to set all the cards:

You`ll use the bone lord card ability to farm energy cells, and the bone heap to buy cells x bones and increase his power level +1 every time. Until it gets "666" on the attack stats.

This is a very tedious achievement, i suggest using the stim mage instead so you don`t need to farm the bones and just level him up directly.

Forgotten Lore "Receive all 5 cards from the Trader in P03's factory".

This is a late game achievement, you`ll need to get every single holopelts from all of Robotopia places.

After collecting all 5 pelts, you`ll need to unlock the door of the trader by clicking on the lock that is located inside the cabin at the top left corner of the map.

Just exchange all 5, click all the cards and that`s it.

To get this achievement you NEED TO DEFEAT THE LEVEL 3 BOUNTY CARD, NOT WIN THE FIGHT. If you beat a level 3 enemy without destroying the card it won`t count for the achievement.

In order to get the level 3 bounty card to appear, you`ll need to have a 3 star prize on your head by defeating enemies in a row.

Note: if you lose several times and still manage to clear the spots, you might not be able to rank the 3 starts before you reach the ending. I suggest to farm enemies, back up to make them respawn, and proceed with the farm, if you reach a checkpoint, that spot is useless now.

Now this achievement is pretty missleading, if you don`t empty the recycling bin the achievement wont show up, you`ll need to instead, create a "txt." file on the game folder, pick it when you are asked to and sacrificing it during the match.

Right after it died, delete the file from the folder.

NOTE: i havent tried this one but is the explanation i get from guides.