Home Dragon Age Inquisition Mods & How to Install Them (2022)

Find the Dragon Age: Inquisition game file, usually in the Origin folder on the drive the game was installed.

Download the DAI Mod Manager file and unzip it into the Dragon Age Mods folder.

Install the Mod Manager (ignore the Tool Suite), choose 64-bit, and Download All.

In the Dragon Age Mods folder, navigate through the DAI Mod Manager subfolder and open Daimodmanager.exe.

Download a mod and navigate to the download location on the computer. Open the mod folder until you find the file with the extension .dai.

Move the .dai file into the Dragon Age Mods subfolder.

Navigate back to the Mod Manager and make sure the mod appears and is checked. Click Merge. Wait for the message saying Task Completed.

Close the Mod Manager and start the game.

Find the Dragon Age: Inquisition game file, usually in the Origin folder on the drive the game was installed.

Download the Frosty Mod Manager (Ignore the Tool Suite) and navigate to the download location on the computer.

Unzip the file into the Frosty Mod Manager folder.

Double click the Frostymodmanager.exe file to open the application.

In the resulting dialog box, select DragonAgeInquisition.exe from the game folder and click Open.

Download a mod and navigate to the download location on the computer. Drag and drop the full zip folder into the Mod Manager.

Double-click the mod to apply it to the game. If it has been applied correctly, it will appear in the Applied bar on the right side of the Mod Manager with a checkmark.

Click Launch to begin playing the game with the mod installed. 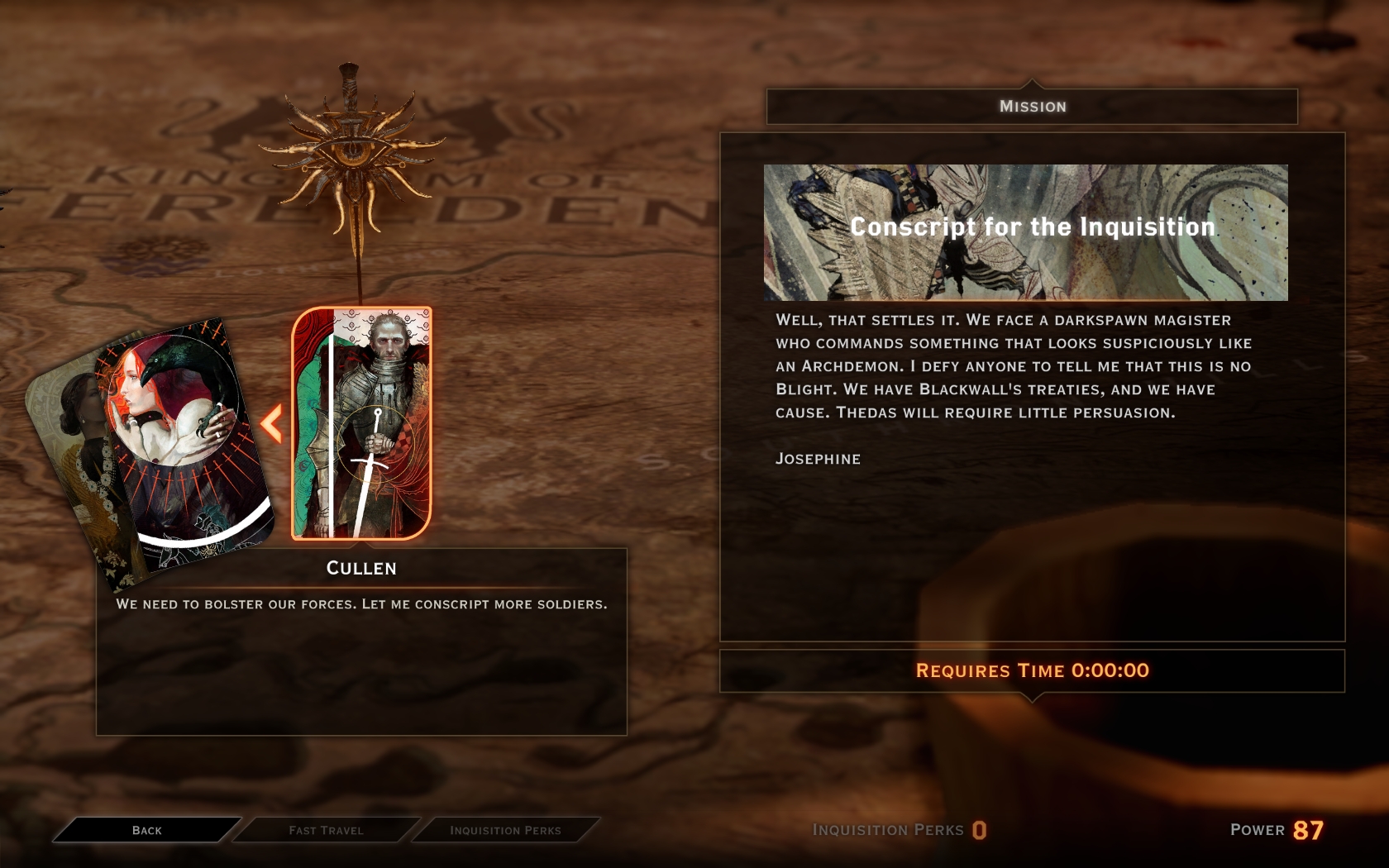 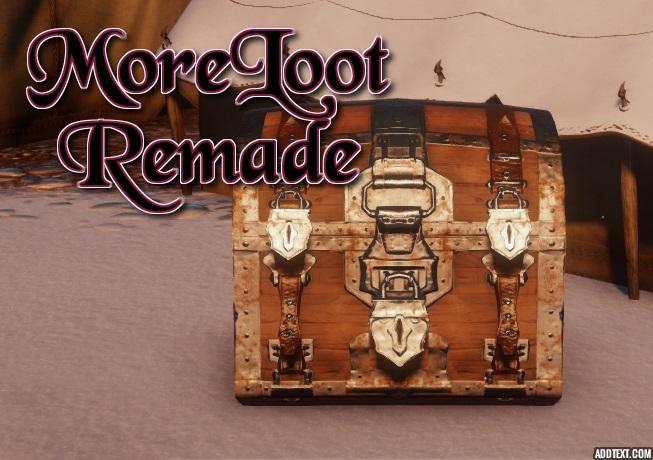 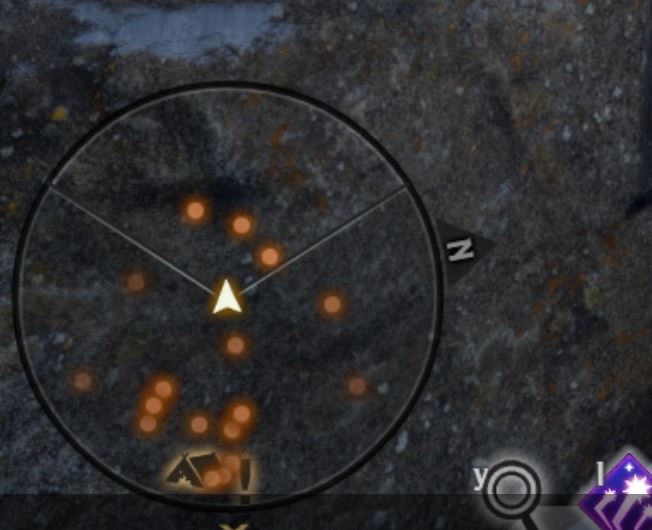 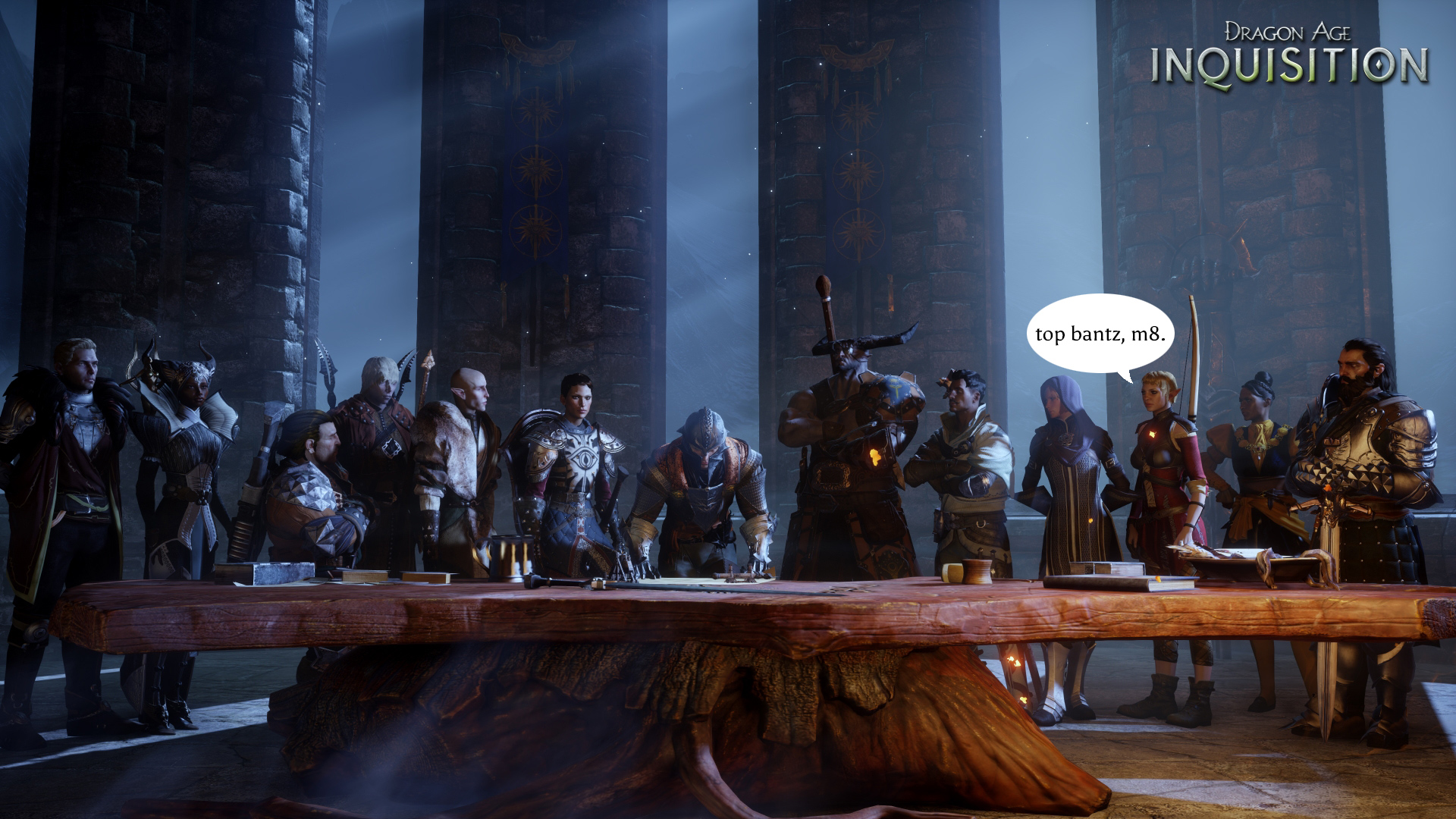 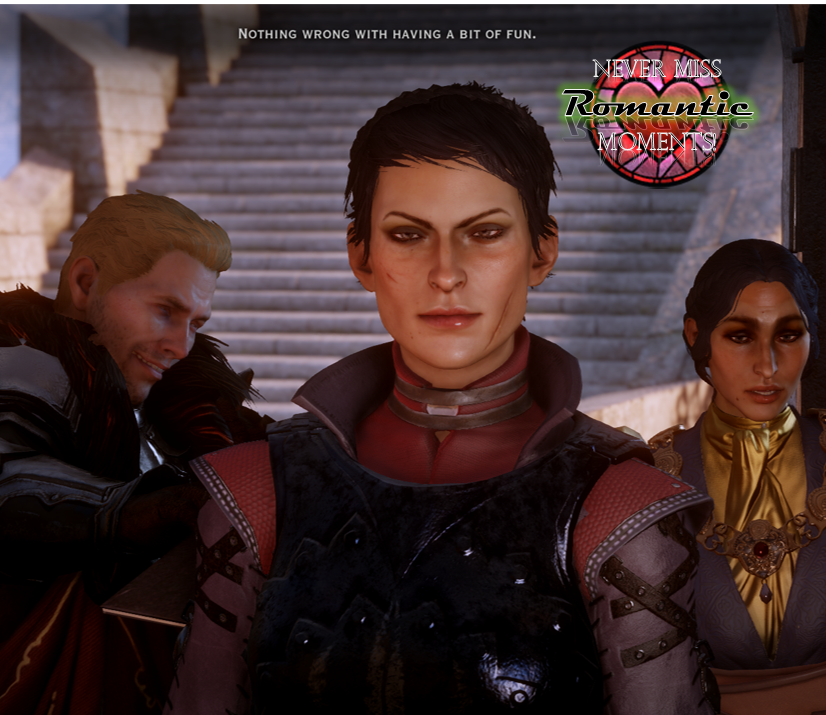 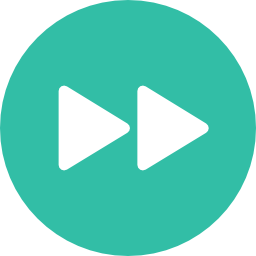 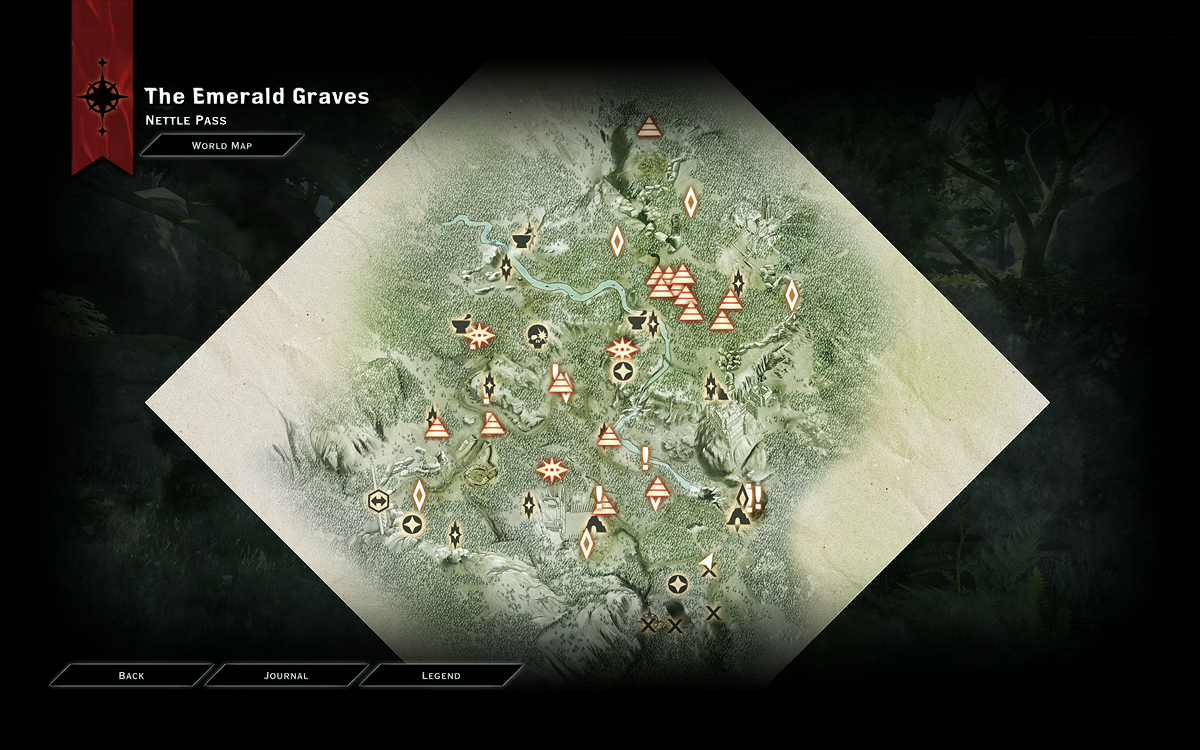 War Table - No Waiting[www.nexusmods.com] mod by Tahira. Every War Table mission will be completed upon activating, save ones which can Cause Bugs. The "Truth or Dare: A Dangerous Game" mission takes one minute to avoid a known bug.

The remake of Dheuster's More Loot Mod[www.nexusmods.com] , uploaded by tirnoney, allows players to add overrides to about 200 of the over 400 random loot tables in the game to increase the chances of enemies dropping gold, rare items, crafting items, and schematics. The player can control what specifically they want more drops of.

Another Inquisition Perk players can pick up from the War Table is Eagle Eyed, a perk that improves the radius size of the search function to point out easy-to-miss loot. The radius size does not improve all that much using this Perk.

Because relationships are such a huge part of the game, this is easily the best mod, and one fans almost universally love. More Banter[www.nexusmods.com] was created by jerrybullet on Nexus Mods to fix a bug that prevented party banter from triggering while exploring the different areas of Thedas.

More Banter ensures the party talks during side quests once every 15 minutes, and any time the player changes their party at camp. With over 5 hours of recorded party banter between every possible combination of characters, players can now hear the relationships between their companions grow and develop.

For a more realistic take on relationships, borglet created the Multiple Romance Mod[www.nexusmods.com] . With it, players can select the characters they may want to flirt with in a game and add them to the Mod Manager. This way, if the player chooses a romantic partner, they can still use the flirt and romance options with the selected character or characters simultaneously, which is typically not allowed.

For a more holistic Inquisitor appearance overhaul, players will want to pick up the Enhanced Character Creation[www.nexusmods.com] mod from kingslayvr. This mod allows players to fully customize the Inquisitor's appearance, including full use of the color wheel for hair, eyebrows, eyelashes, and stubble.

Boot the game faster than ever, and with benefits!

Completely skip the Save Reminder screen

Autologin; You do not need to press start ever again!

Offline mode; If you go offline on Origin, you'll still be able to quickly access your saved games!

Developer launcher; A "jump to map" feature that allows you to quickly launch any playable level in the game!

No More Fog of War

After multiple playthroughs, players got tired of having to clear away the fog of war. So... maps are now always clear of it!

This mod turns the fog of war completely off for the maps modified. If you uninstall it, maps will revert back to their pre-mod appearance.

Choose the FBMOD version, not the DAIMOD version, since we will use Frosty mod manager not DAI mod manager. The same principle should be used for other mods.

This mod isn't perfect, but I hope you still find it useful!

Gather Coin missions at the War Table give 50,000 gold and complete instantly. Shouldn't affect anything else, but let me know if it does. If you have another mod that modifies these operations, you'll want to load this after it.

Fly by holding the jump button.

While falling, hold the jump button in air to start flying again.

Best used with No Boundaries mod to fly out of bounds!

You are no longer stuck to the playable area.

All Out of Bounds respawn triggers are now removed.

This is a basic mod that allows the respec amulet, The Tactician's Renewal, to no longer get destroyed when you use it. Simply equip it to respec, then un-equip.

This is a simple mod that adds infinite amounts of all of the crafting materials used for weapons, armor, potions, runes, and masterworks, infinite Amulets of Power that can be used by any party member, and infinite of one of the major trade contracts that increases Inquisition experience to the Re-Spec shops in Haven and Skyhold's Undercroft. It also increases the amount the shop buys items for to 20x their value so you can afford everything it sells, all in one convenient place.

Install with Frosty Mod Manager, and run the game through it with the mod active to use it. All DLC is required

This mods allows you to kill most enemies instantly and their experience points are granted as usual.

Aims to rid Inquisition of its lingering issues and bugs.

2020-11-13: The Frosty version seems to have issues right now. If you're using Frosty Mod Manager, use it to import the .DAIMOD file instead.

Changes the Copperplate block font to something more readable, such as Time New Roman which is my favorite. Essential quality of life mod.

Extended Settings is a modular mod that expands the in-game settings. It increases the max and min sliders, while also allowing you to get more precise numbers.

I found the feature which allows me to increase Gamma very helpful. In the original game, it is very dark and very difficult to see in places without light.

(All races) - get rid of that ugly Mercenary Coat (originally for daimod. but I loaded it with Frosty and it works well). This one works or any race, gender and class combo.

Party at the Winter Palace[www.nexusmods.com]

Every recruited party member will be present at the Winter Palace

Does not affect your active party for combat sections

Red Jenny caches will spawn if Sera is recruited, even if she's not in your active party, and she still gains approval

Your love interest will still come talk with you after the ball, even if they're not in your active party

Brings the multiplayer-only difficulty "Heartbreaker" into single-player. Enemies have more abilities, are faster and more aggressive. Some examples include Pride Demons having Static Cage, or Venatori mages using Stonefist.

Now available in both Frosty and DAI Mod Manager formats.

This mod affects "Nightmare" setting in all single player content including DLCs. It does not affect any other difficulty setting It has no effect on Multiplayer.

This mod beefs up most of the factors that contribute to making nightmare difficulty setting tougher than hard or normal. Enemies will be tougher, move faster, have shorter ability cool-downs and hit for much more damage. If using trials, they'll be much more likely to be promoted.