A Detailed Guide to the Sniper Rifles of SGWC2

Sniper rifles in SGWC2 are grouped into three classes: Light, Medium, and Heavy. Each class has a special item that can be purchased to improve its performance in certain areas. Light snipers have access to a backup sight for use in close quarters, Medium snipers get an improved barrel, and Heavy snipers get a bipod. More information on the classes will be in their dedicated sections.

Before we get to the weapons, we should talk about scopes. Scope options are... strange in this game. Unless you've just bought a new rifle and can't afford the Extreme Long Range scope, there's no reason to use anything other than the Extreme Long scope. Take for example the Riihimaki M10. Here's a table of its scope magnification and max zeroing range.

As you can see, the Extreme Long Range Scope is strictly better than any of the others, and in most cases, it's not much more expensive than the other options. Because of this, I will only note the magnification and max zero of the short range and extreme long range scopes for each rifle.

Some rifles claim to have a 'special' scope, which as far as I can tell means it has a wider magnification range for that option than usual. The Extreme Long Range scope is still the best in all cases.

Finally we get to the weapons themselves. Light snipers are an odd breed. They lack the ability to kill with bodyshots against anyone, but are very quiet, allowing you to use them in the interior parts of the maps without alerting anyone. They have access to a backup sight which is supposed to make short range shots easier, but in most cases the minimum zoom on the main scope is small enough that you can handle close enemies. Or you could pull out your pistol. 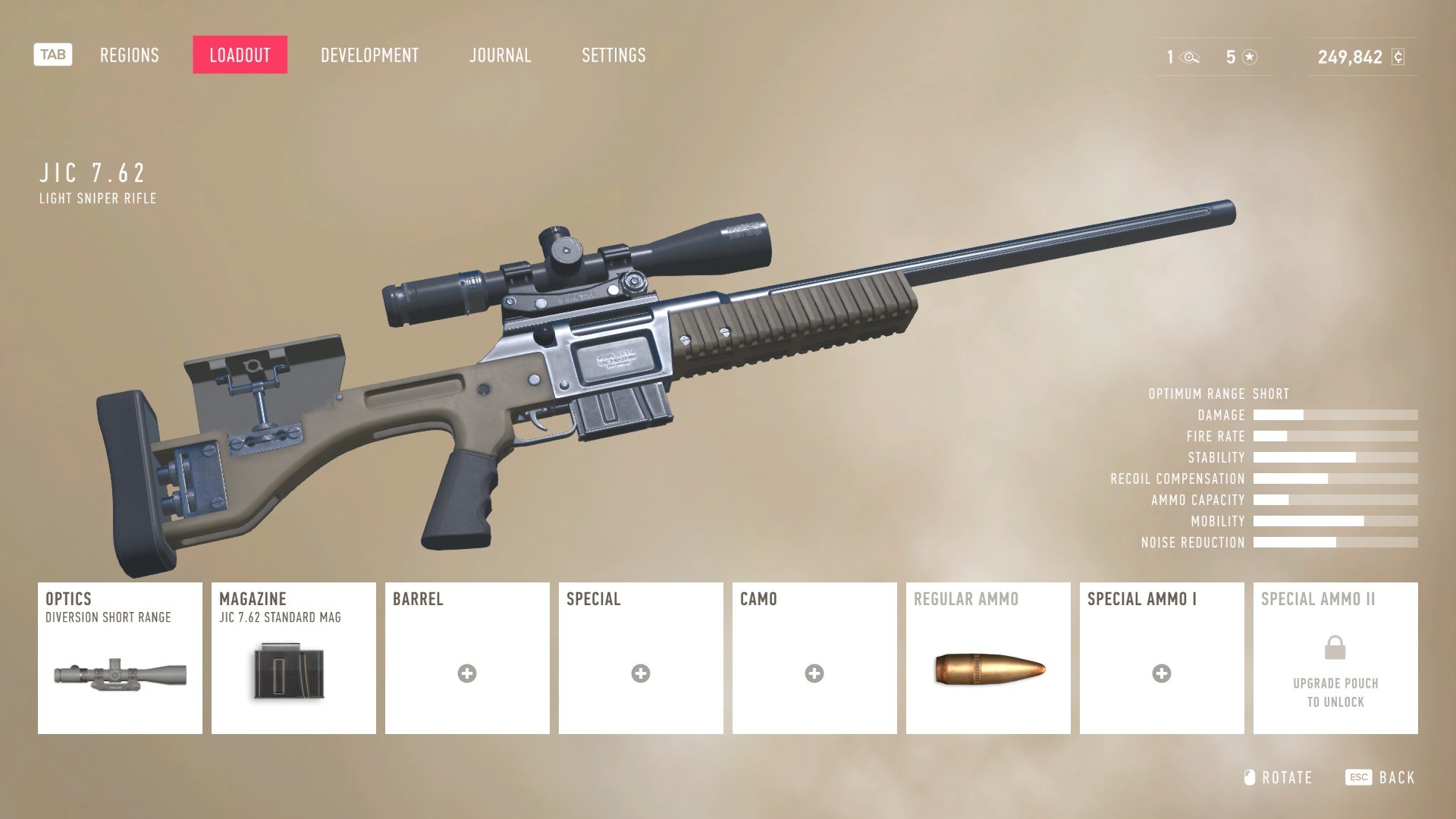 This is one of the starter rifles. You buy it as part of the tutorial, and the intel token is given to you automatically. Also the suppressor is cheap and also bought during the tutorial, and the Extreme Long Range Scope is free. It's not a bad rifle. It can certainly get you through that second contract, and it has good special ammo options. 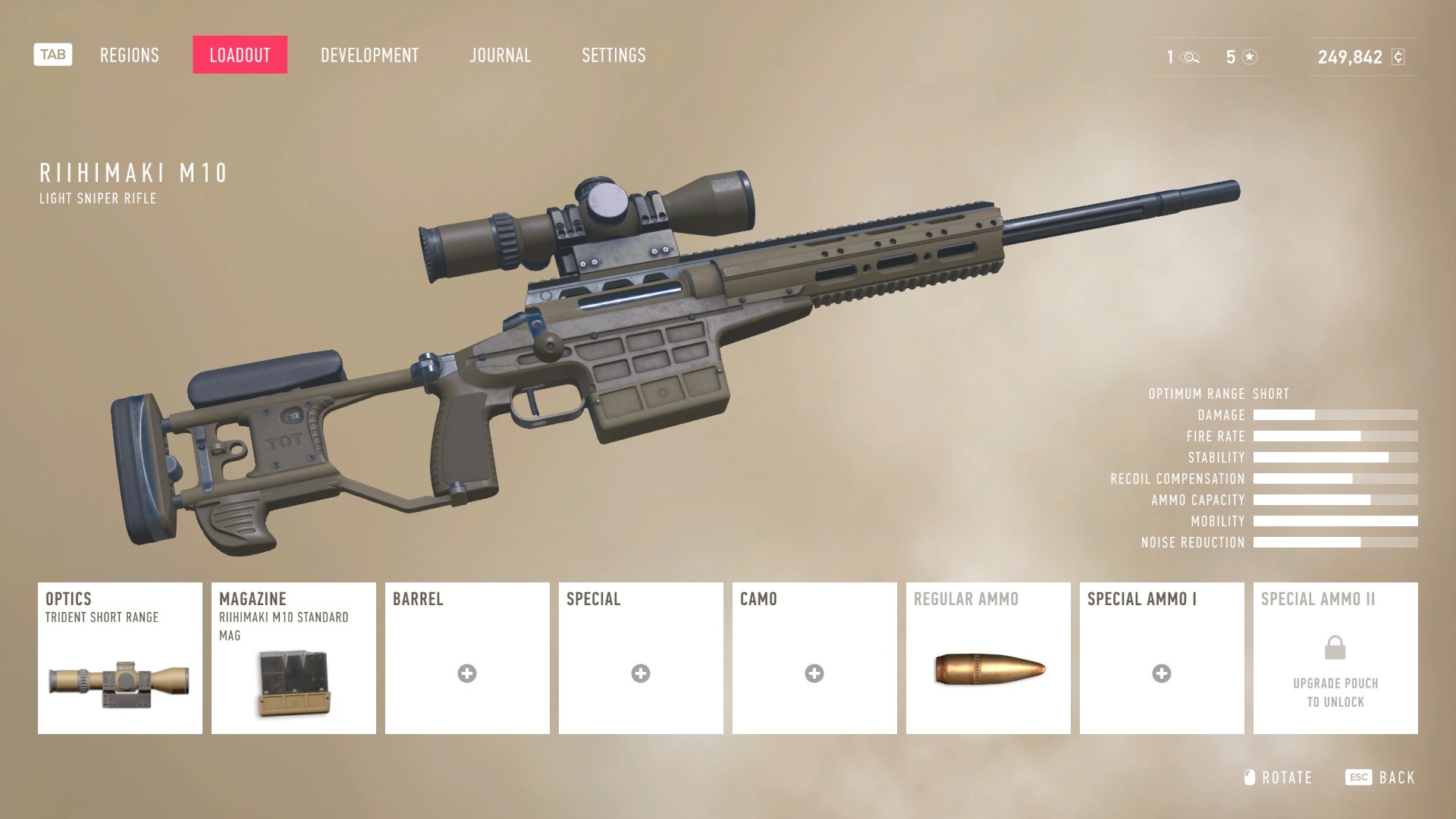 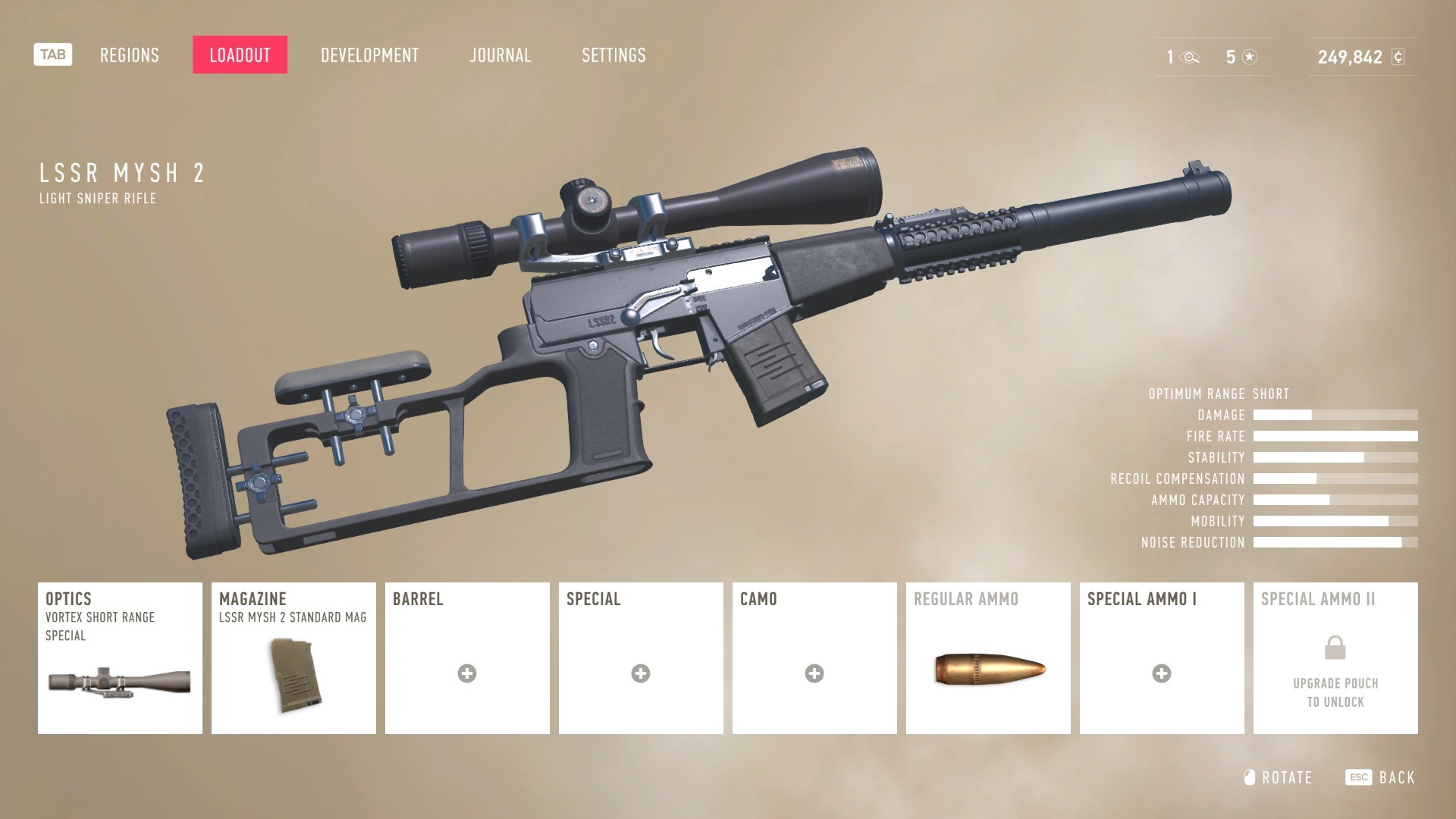 This rifle is interesting for a variety of reasons. First, it is the only suppressed rifle in the base game that can use tagging bullets. Second, it is integrally suppressed, so you don't have to buy a suppressor for it. Third, it is semi-auto. This makes it work especially well with the backup sight. Its starting scope also has an unusually wide zoom range. You do have to complete a bounty to get the intel tokens to buy it though. 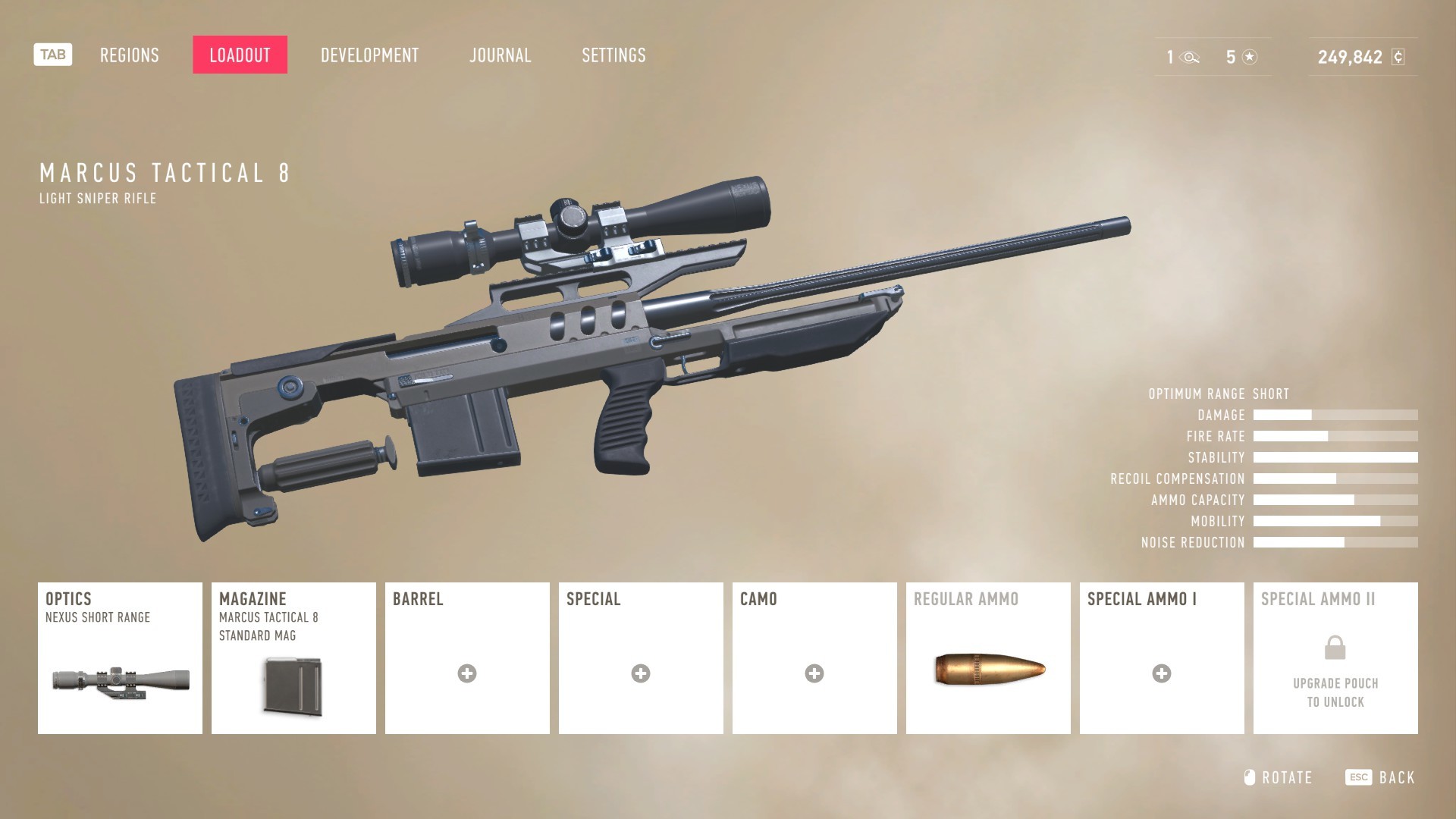 Despite the pro/con list in-game saying this weapon is loud, it is not. With a suppressor, enemies don't notice anything unless you are very close. I would need to do more testing, but I think I've been shooting about 20m away from enemies and they don't get suspicious. The inclusion of AP rounds makes this weapon able to take on any enemy, and can blow up an APC in two shots to its weak points, which are revealed in mask mode once you get the Combat Engineer development skill.

Medium snipers are very good in this game. All of them can equip suppressors (or have one built-in), and can kill unarmored enemies with bodyshots. They are louder than light snipers, but not too bad. It's still a good idea to go for headshots when you can because determining if an enemy has armor can be tricky. I need to do some more testing, but medium snipers might be able to kill heavy soldiers with a particularly well-placed shot like in the first Contracts game.

Medium snipers also have access to an upgraded barrel that you can purchase. This improves stability, recoil, mobility, and also damage. 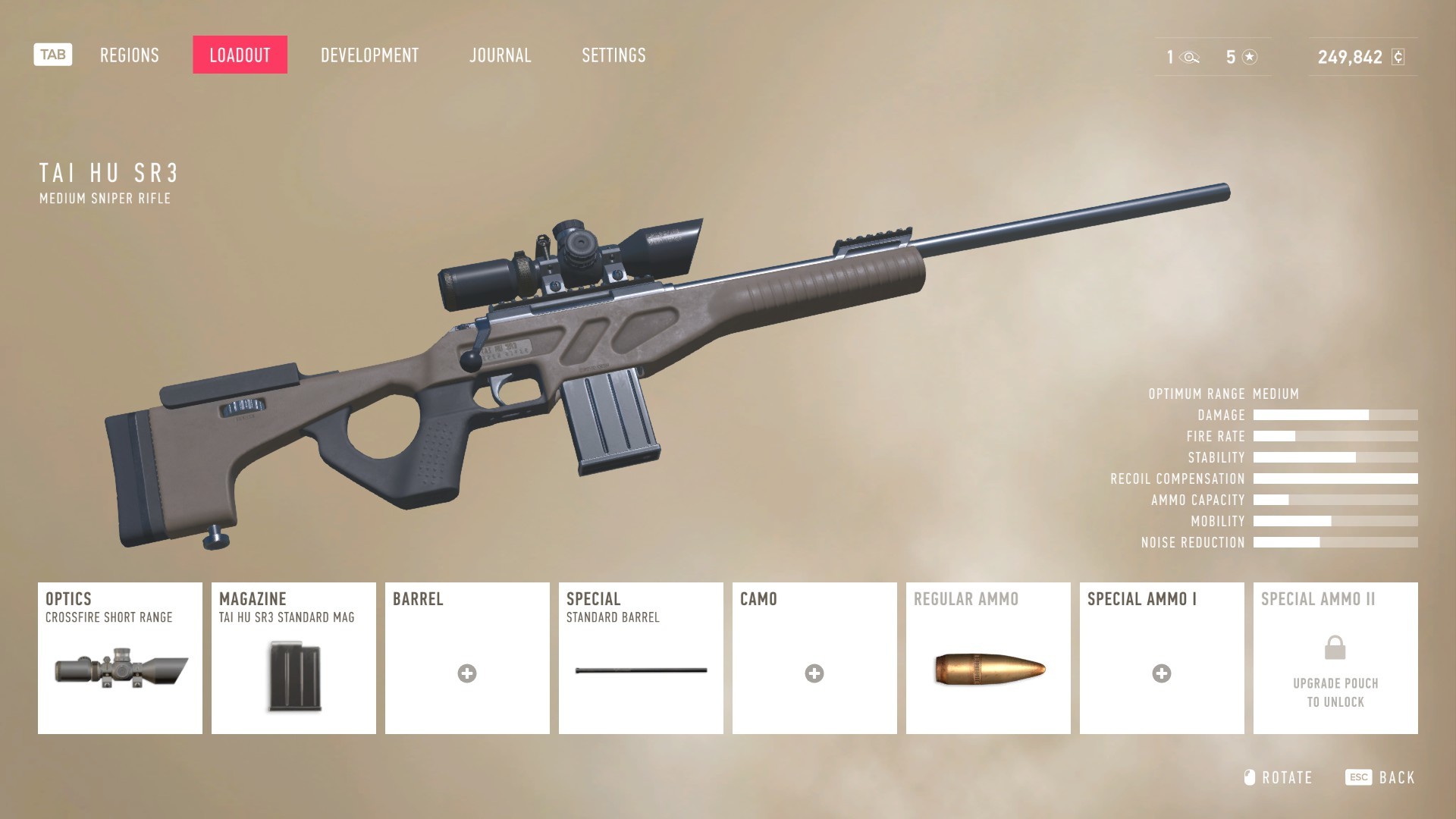 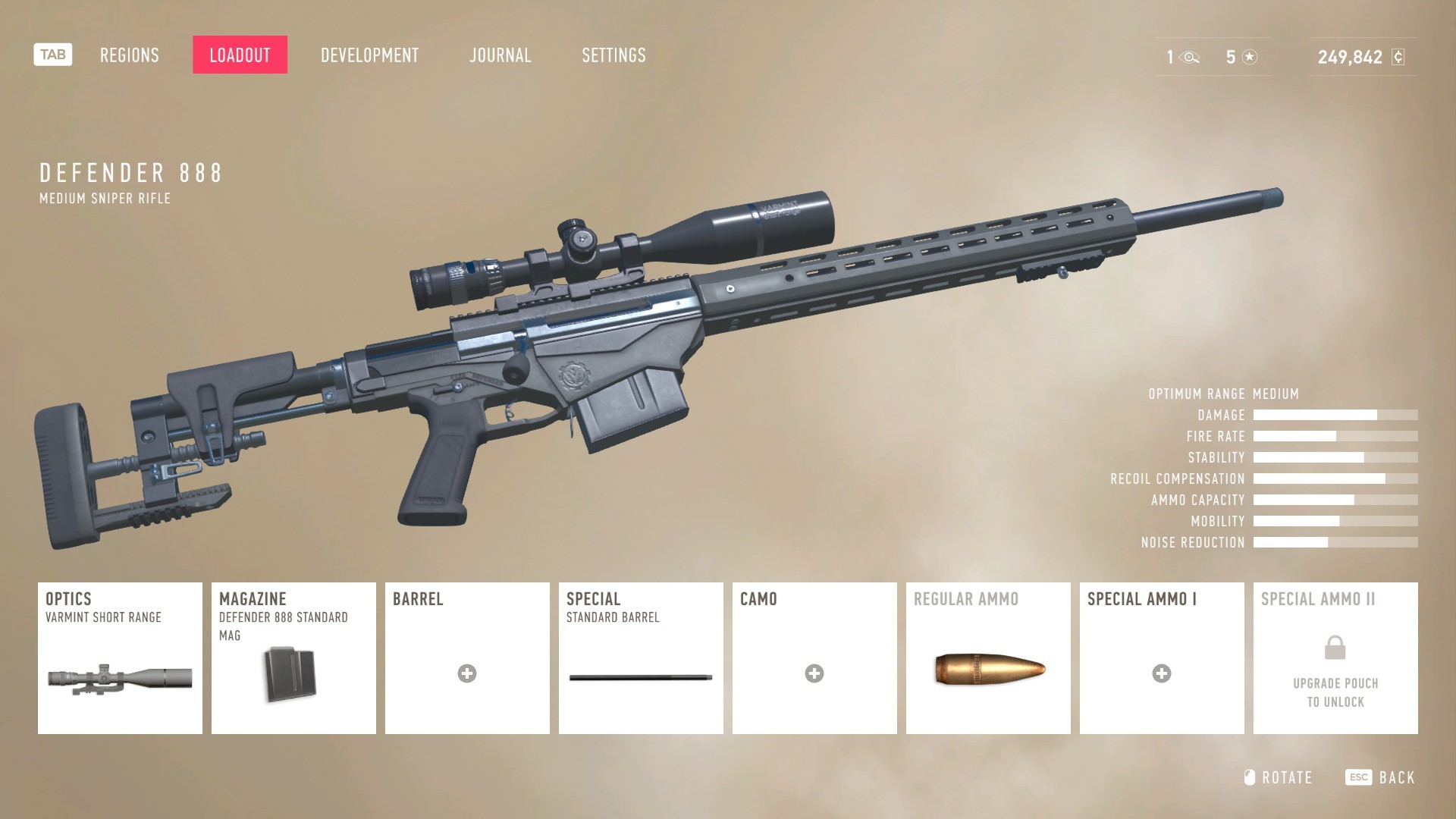 This weapon is really nice to use. It's kind of a do-it-all rifle since it has a suppressor, AP ammo to make sure heavy soldiers go down, Luring ammo for splitting up groups of enemies, and A.G.I.L.E. rounds for when you want to absolutely make sure you hit your target. 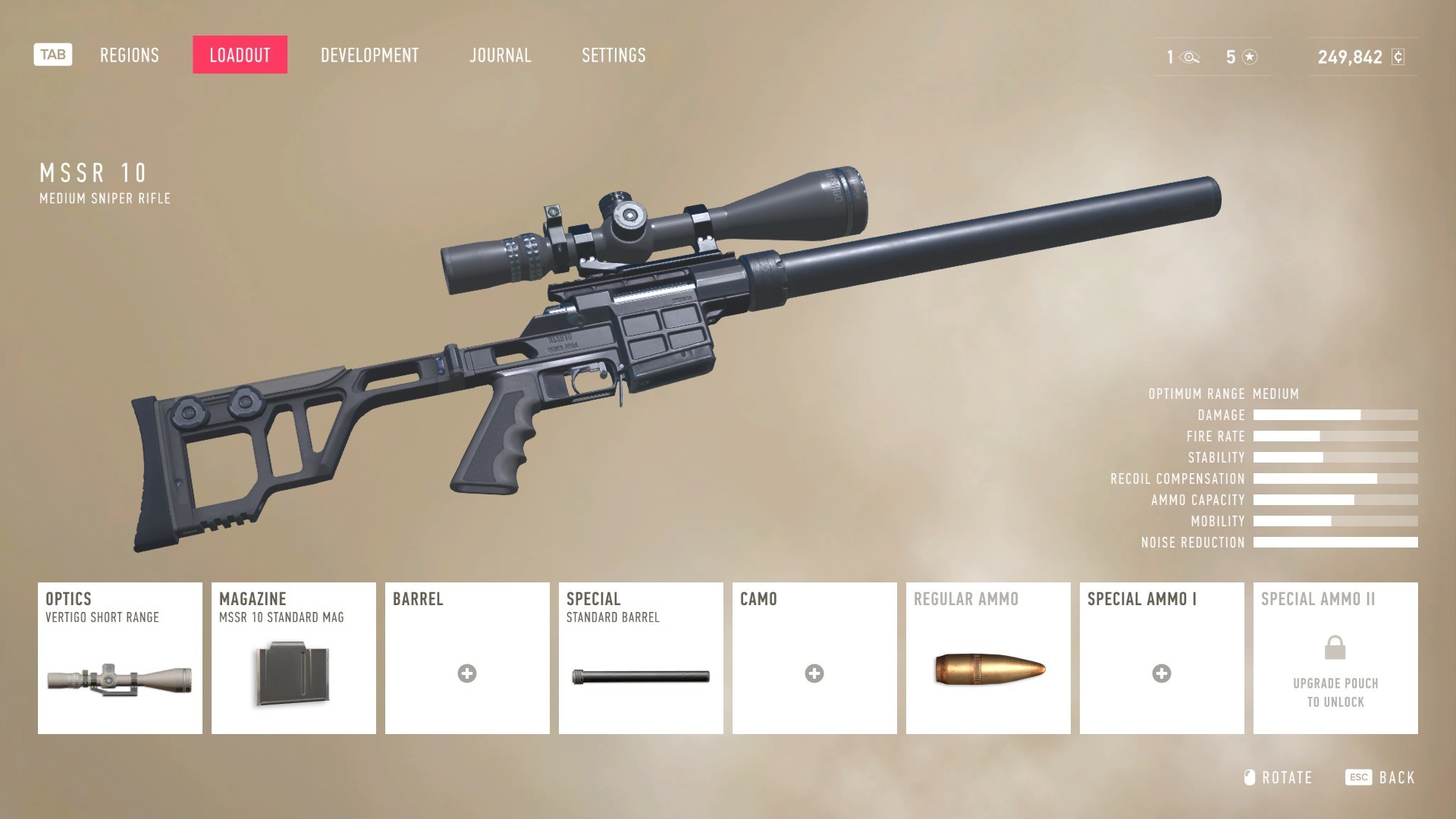 Heavy sniper are big, heavy and loud. They cannot use suppressors, but at the ranges you fight at in classic contracts, they kill anything other than heavy soldiers in one shot to the torso, and against those heavy soldiers, one shot to the head with standard ammo will kill, or a bodyshot with AP ammo.

For the long shot contracts, once you get the the sniper hides, these are the best weapons for those contracts. Even without access to a suppressor, nobody will hear you when you're 1000m+ away. A bit unrealistic, but still fun. Bodyshots are less consistent at these ranges, but with some patience, you should be able to land headshots on anyone you need to kill.

The special slot item is a bipod, which passively increases your stability, reducing sway. You do not have to deploy the bipod for it to work. 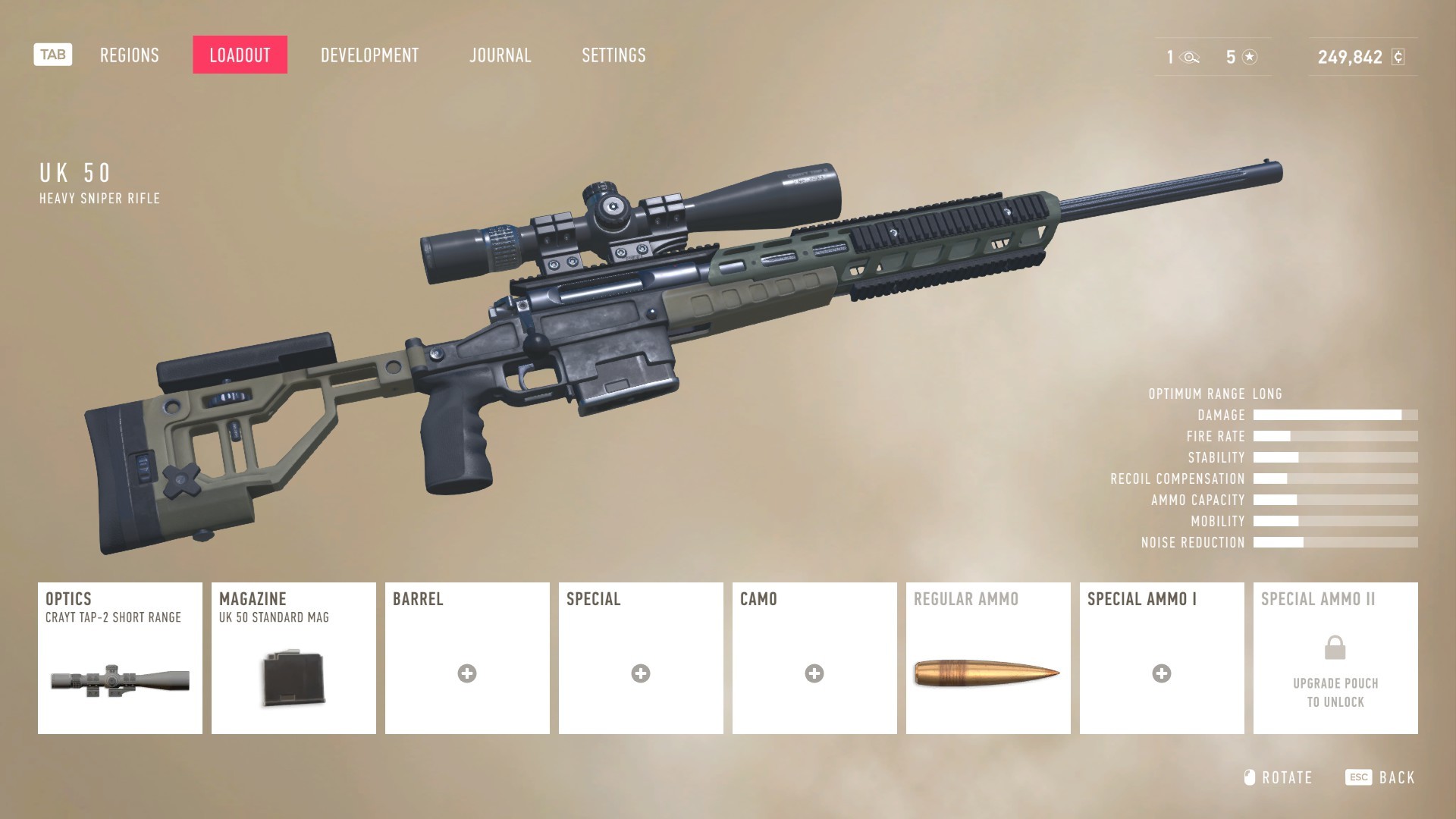 This is the gun you start with, and what a gun to start with it is. You get the ELRS for free, and that gives you the highest zoom scope in the game right at the start. It can kill anything with one shot, except vehicles, but for those you can hit them with an EMP round and the squishy crewmen jump out for you. The firerate and magazine size aren't great, but it is a starter gun after all. 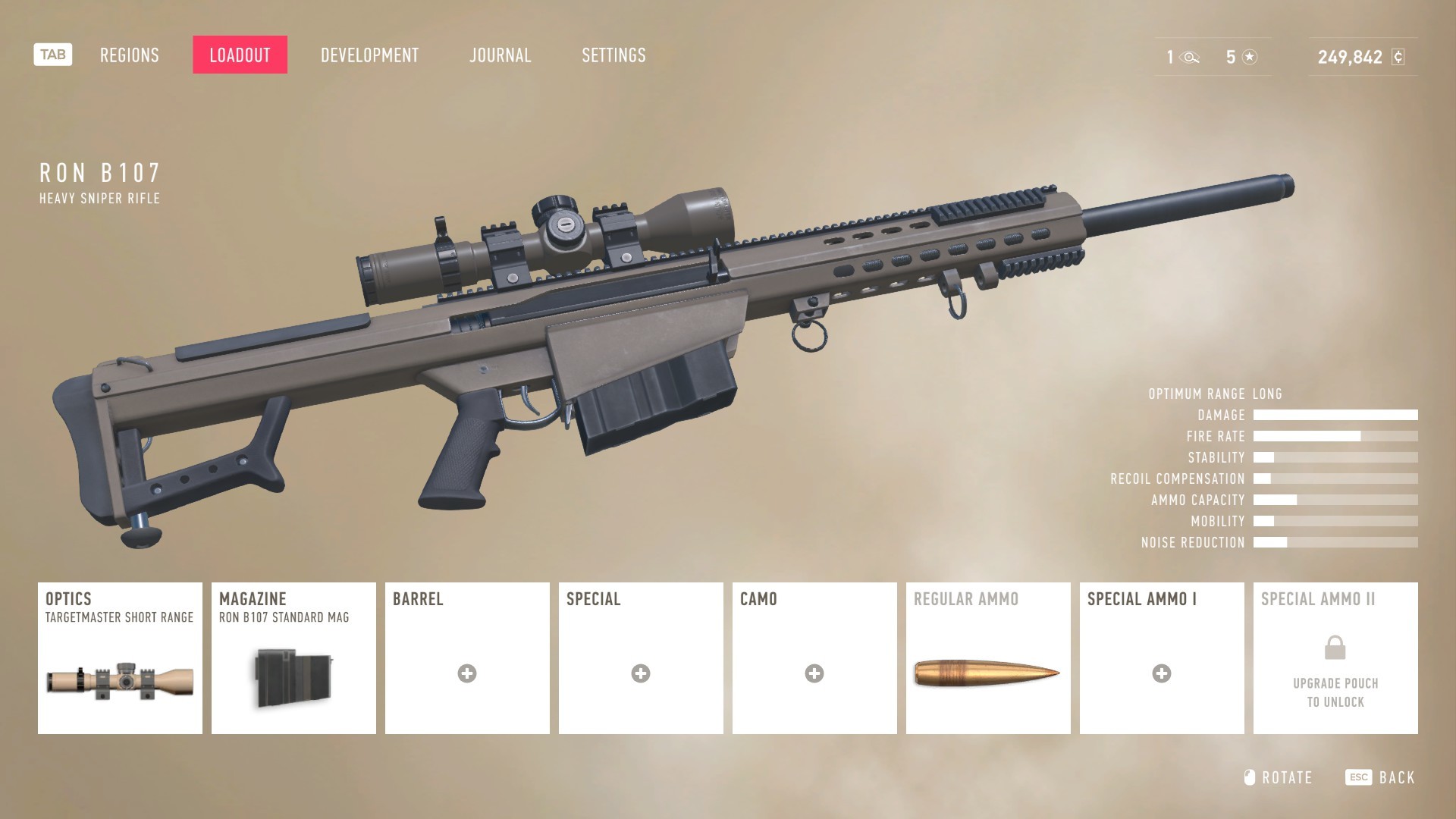 This weapon is unparalleled when it comes to the long shot contracts. You have complete flexibility for what special ammo you bring, plenty of zoom, and it fires semi-auto. Since you can't use a suppressor, you may as well use the muzzle brake to cut down on the recoil and make follow-up shots even easier.

There are six types of special ammo, but each rifle only has access to three of them (with one exception), and you can only bring one type of special ammo into the mission unless you use the special ammo magazine attachment, which allows you to bring one additional type. For example, the UK-50 can use Luring, EMP, and Explosive ammo, but without the special magazine, you could bring only one of these, let's say Luring. You would be able to use both your regular rounds and have a few Luring rounds to use for the mission until you get the option to change your loadout at an exfiltration location. With the special mag, you could bring Luring AND EMP rounds.

Tagging - Tags enemies within 25m of the impact point. Useful for spotting enemies in buildings.

Luring - Lures one enemy within 15m of the impact point. Even if multiple enemies can hear the lure, only one will investigate.

EMP - Disables vehicles and electronics in an area without making a huge amount of noise. Nearby impacts will still alert enemies, so it can't be used todisable the antenna arrays without killing the guards next to them.

Explosive - Deals damage in a 2.5m radius of the impact point. Also alerts everyone else. Might be useful for killing vehicles though.

A.G.I.L.E. - Ignores wind and gravity. Also has a considerably higher muzzle velocity. I will admit to shamelessly using these on some of the long shot contracts.

Each rifle has a different selection of special ammo that it can use. This set of tables shows which rifle can use which ammo, separated by class.

In my initial playthrough I didn't record the price of some of the things I bought, so some of the prices are left as TBD for now. If someone can post those prices in the comments, that would be awesome. Additionally, I'm not really sure what to do with the light rifles. If you have suggestions on where they shine, post those in the comments please.

Other weapons I haven't gotten around to using, so they don't have a notes section. I will probably get around to those at some point.

Overall, I like the sniper rifles in this game. They feel powerful and satisfying to use. However, the inability for standard ammo to penetrate cover at all was a surprise to me after playing the first game, as with the medium snipers being unable to bodyshot all the regular enemies. That said, once I knew these things, the game was still fun.

If I pick up the Solitary Sniper pack, I'll add those to the guide.

I hope this guide helps people make good choices for which weapons to use. Good luck and good hunting.