Home Warhammer 40,000: Darktide Psyker Force Staves - What they do & How they do it

Psyker Force Staves - What they do & How they do it 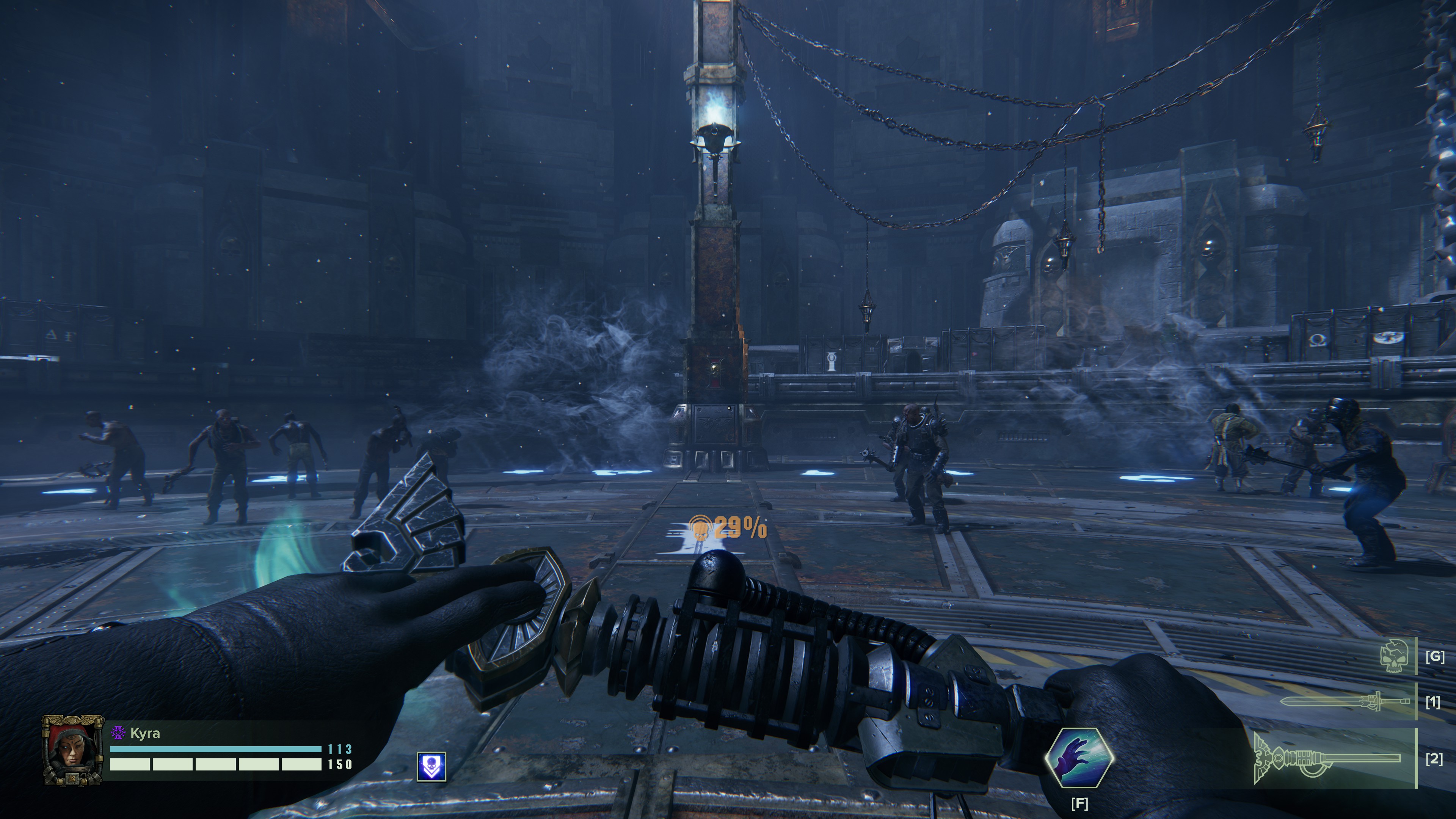 All Force Staves have a "Special Attack" that will allow you to use the staff as a club. This deals minimal damage and is generally pretty useless as switching to a melee weapon is usually very quick.

With the exception of the Purgatus Force Staff, all staves have the same primary attack:

Sends out a bolt of warp energy that travels in a straight line but quite a bit slower than a bullet or las-bolt, so you'll have to adjust aim on moving targets and hitting mobile enemies at a distance can be tricky.

It'll deal decent damage on par with most regular ranged weapons and can hit weakspots like heads for extra damage. Depending on the "Warp Resistance" stat, one shot of this will generate between 3.75-6.25% of Peril.

All staves have a Secondary Attack that can be charged and released. I'll go into detail in the sections on the specific staves, but they all have one thing in common: Your Peril% WILL rise as long as you keep Secondary Fire pressed. Regardless of whether you Unleash or not, you will gain Peril steadily as long as you press that button.

You'll Unleash your Secondary Attack by pressing your Primary Attack button at any point during Charging. Depending on the staff, higher Charge Levels will result in different outcomes, but you can always Unleash at any Charge Level, even right after beginning to Charge your Secondary.

Depending on the type of staff, as well as its "Warp Resistance" stat, Unleashing will generate an extra "jump" in Peril%.

Note that just charging your Secondary, even to 100% and "beyond", will never cause you to explode. However, if you Unleash any of the staves while Peril is at 100% you will immediately enter the "about to explode" animation.

All staves allow you to quell (reduce) your Peril % by pressing and holding your Reload Key. Efficiency depends on your staff's "Quell Speed" Rating.

It is important to note that (currently) not all staves behave the same around the 100% Peril threshold.

With Trauma and Voidstrike staves you're basically fine as long as you Unleash below 100% (99% is fine) this will set you into the "warning state" but allow you to recover easily.

Surge staves will directly set you into the "about to explode" animation if you reach (or exceed) 100% Peril by unleashing. (I#m guessing this is currently bugged)

Purgatus staves behave somewhat similarly to Surge because you will still be gaining Peril while Unleashing the flames. It is technically possible to enter the "warning state" with Purgatus if you end your Unleash exactly at 100%, but it's pretty much pure chance.

Note that your combat ability "Psykinetic's Wrath" can be used to save you even if you are already in the "about to explode" animation after you shot past 100% Peril. 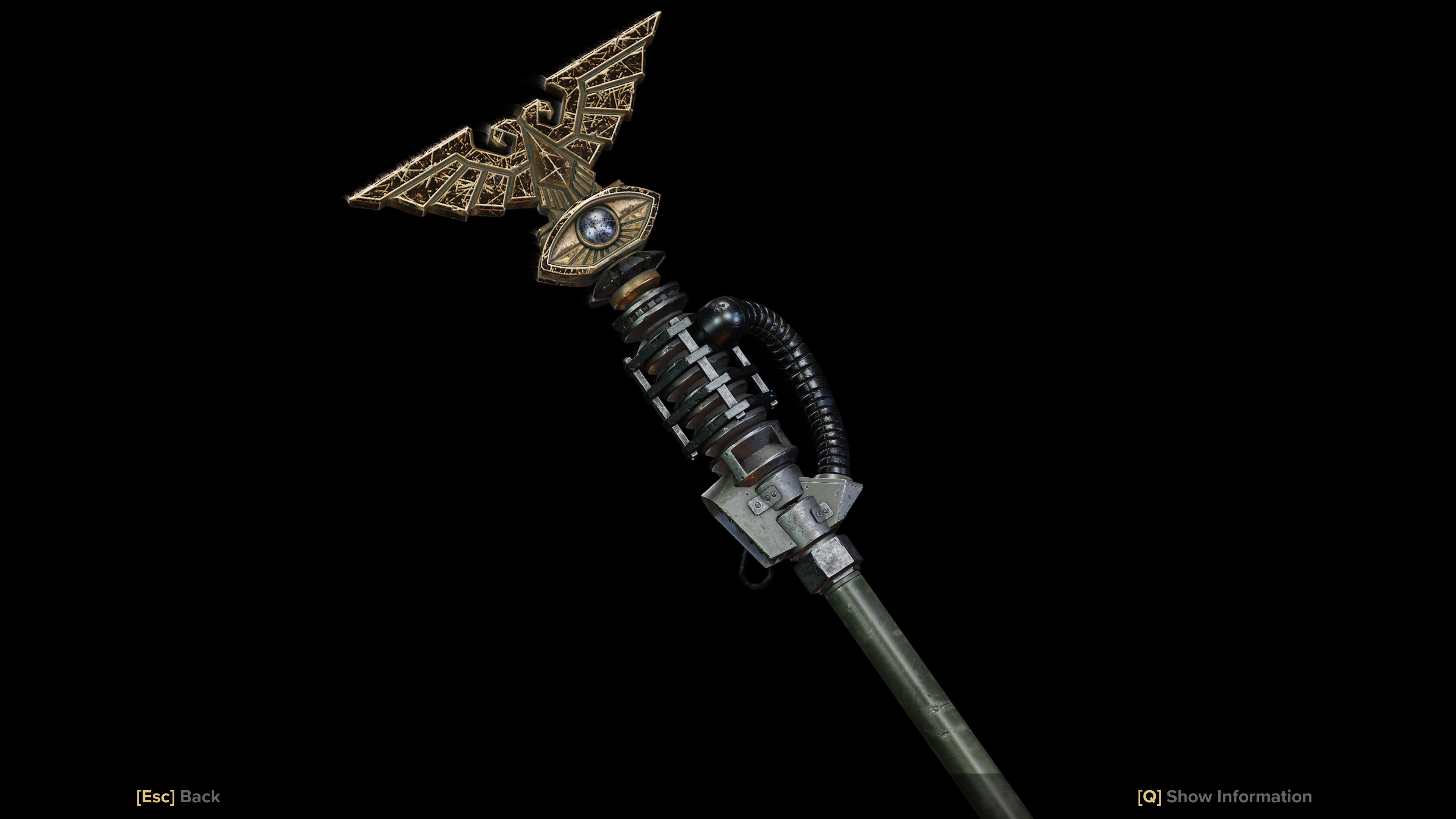 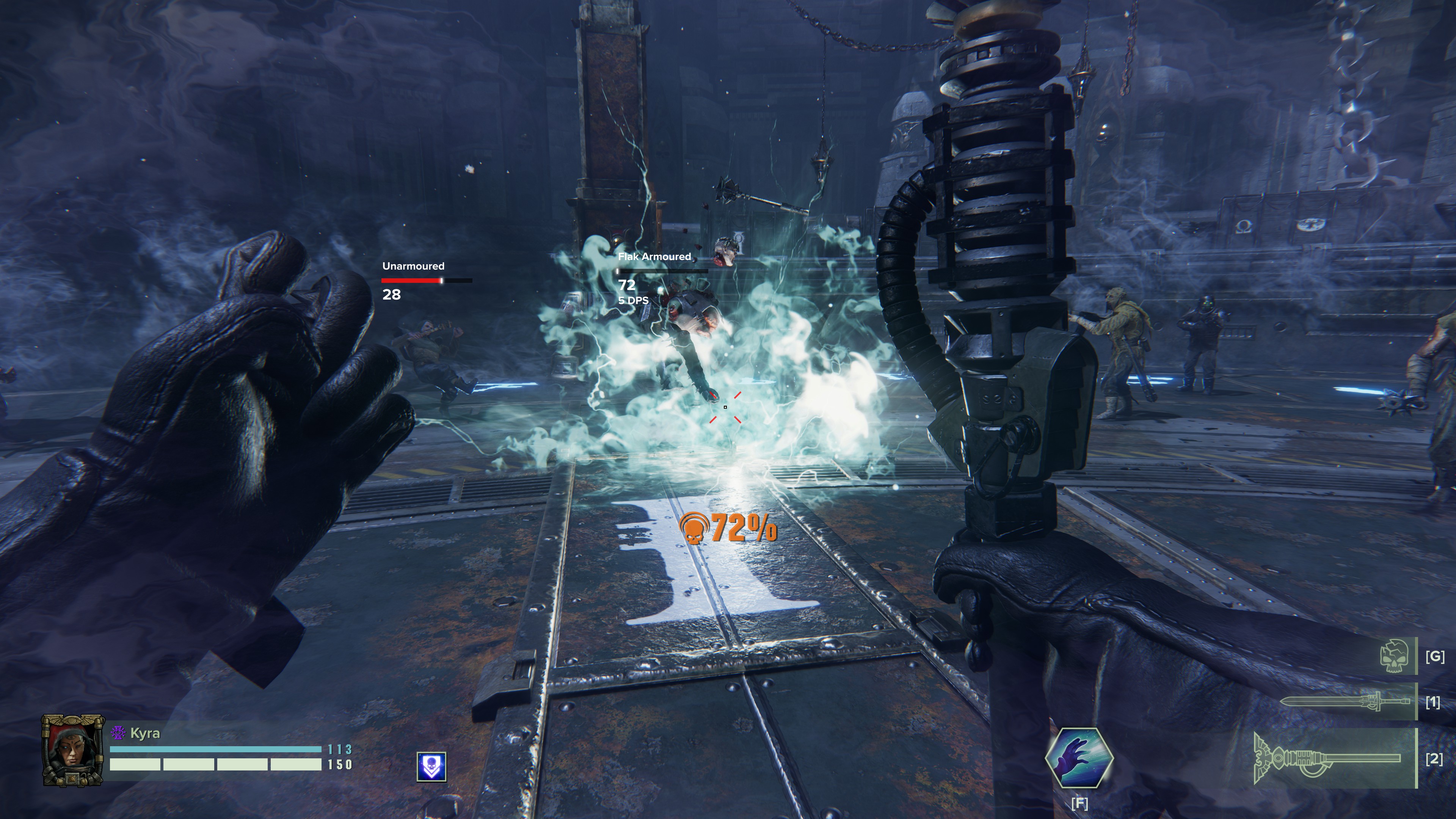 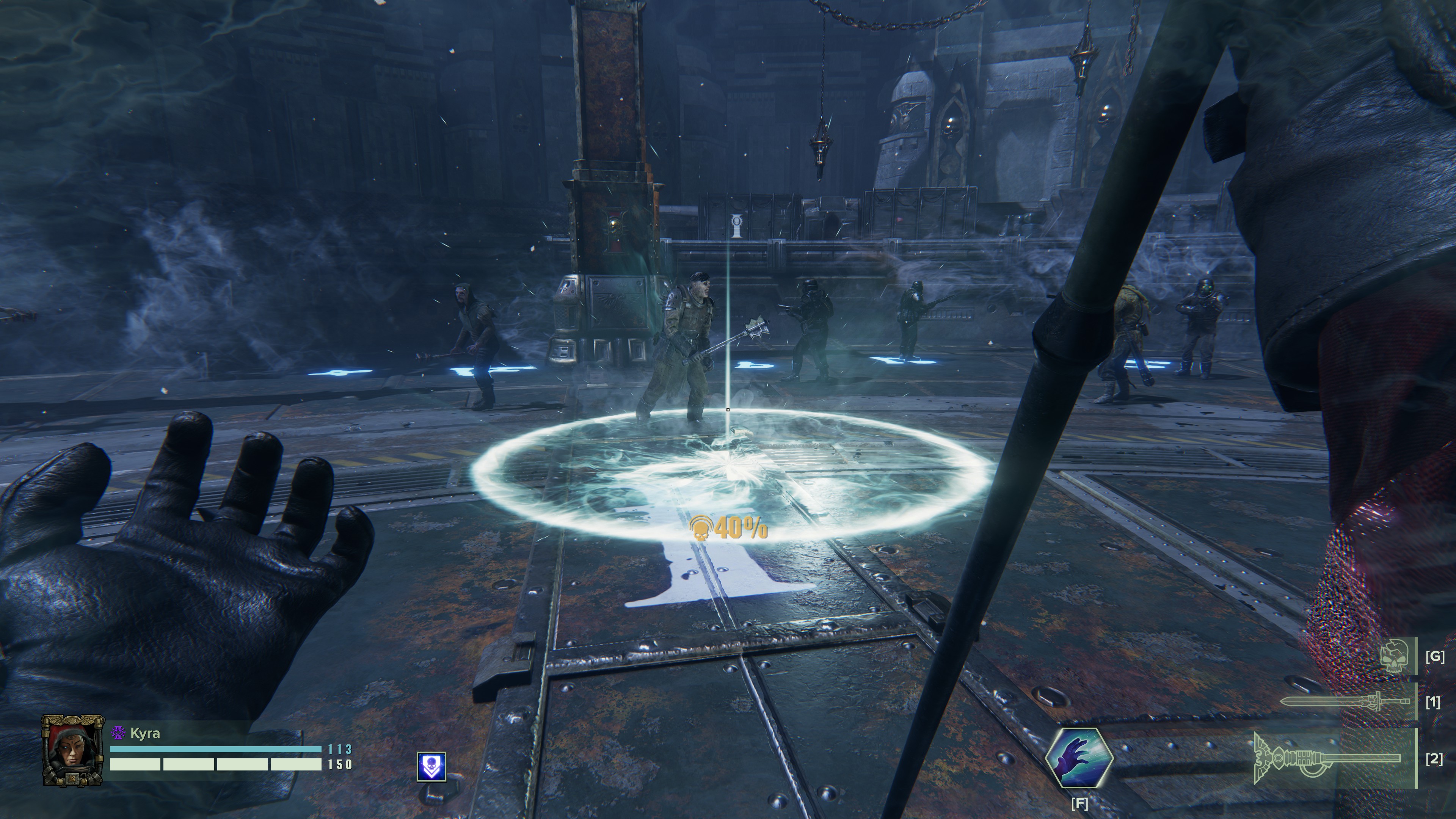 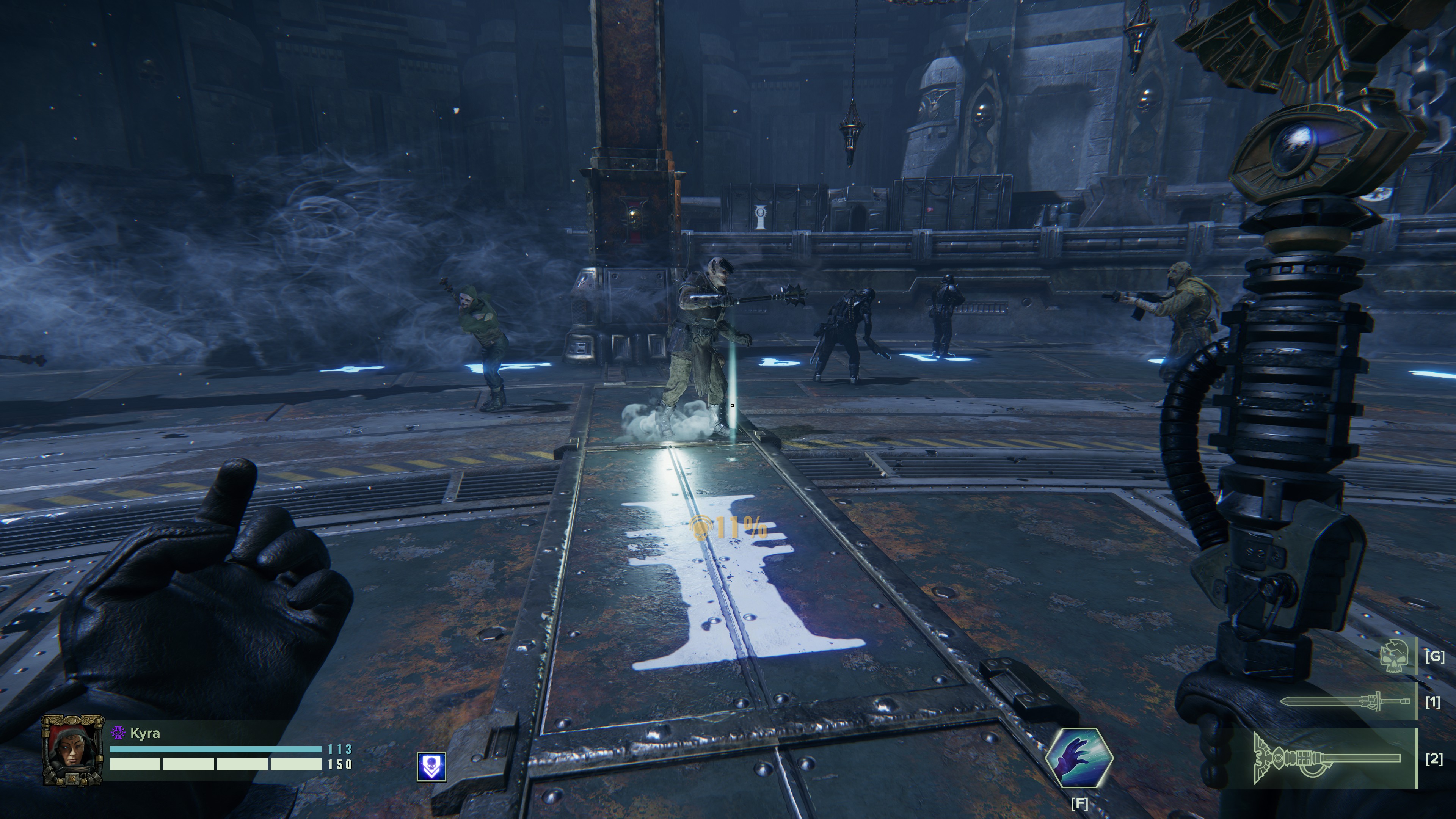 The Trauma Force Staff allows you to make the floor under your foes literally explode with warp energy.

Pressing your secondary attack button will show you a glowing circle outline on the ground which will forcefully explode when you unleash it, dealing damage and staggering most enemies.

Charging the attack up to a higher level will increase the size of the blast as well as the damage and force projected, increasing the stagger effect.

You're fine to Unleash your secondary as long as you're below 100% (99% is fine), even if the Unleash theoretically takes you past 100%. You will just enter the "warning state" animation.

The Trauma Force Staff is decent at breaking the charge of a horde and its Secondary deals damage regardless of armour, which can be quite useful.

For hordes, you'll probably want to start with a large blast followed by several smaller blasts on enemies still clumped together, rather than trying to charge every blast to its fullest.

Sadly, the Trauma Staff suffers from rather short range on the blast making it hard to set up more than one blast before the enemy reaches you.

It can be quite devastating in a good bottleneck, though, and the fact that its Secondary basically ignores armour can really help out. Like most other staves, though, it struggles to break through a Bulwark's shield.

The Trauma Force Staff is somehwat split between a horde-breaker and stagger-support weapon. However, the limited range in particular makes it quite hard to use and means it can't perform in either capacity as well as other staves can.

Surge Force Staff - Come To The Dark Side 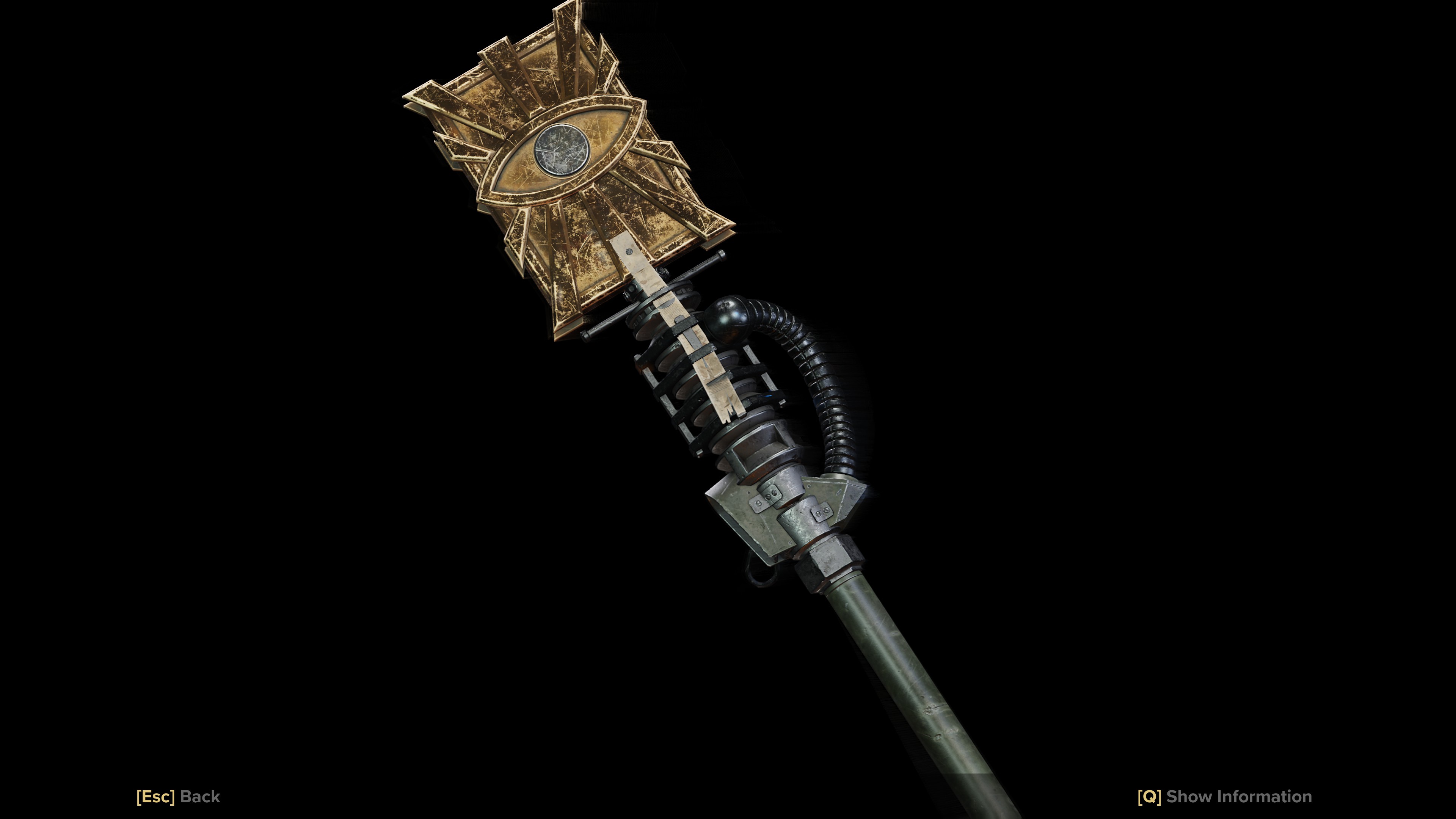 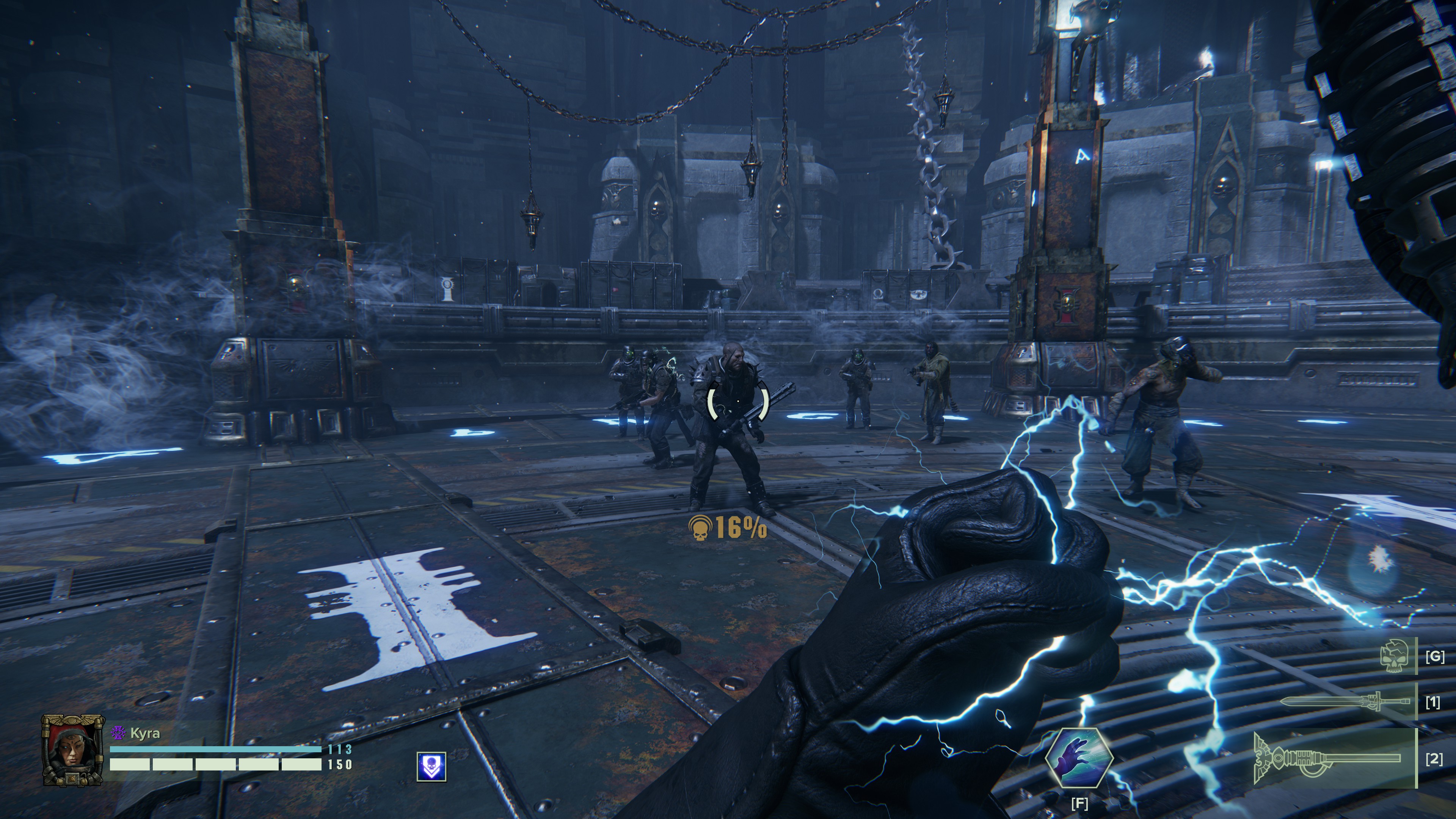 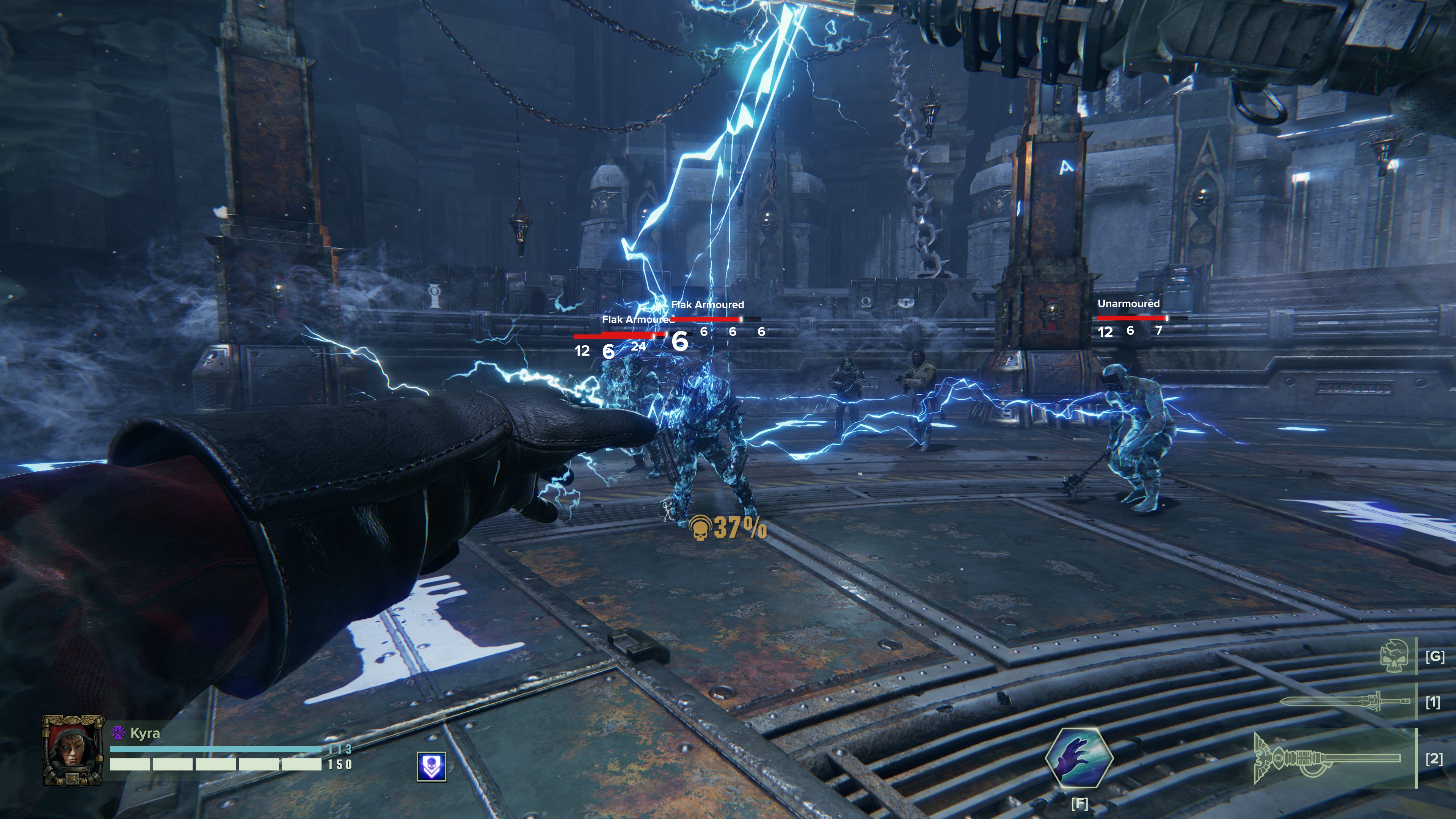 The Surge Force Staff makes you feel like a Sith, by allowing you to throw chain lightning at your enemies.

Charging your Secondary will gather lightning in your fist and enemies you aim at will have sparks dancing around them. When you Unleash your Secondary, the lightning will lance out to the closest enemy in the direction you are aiming (generally...aiming is a bit random...) and then jump to several further targets staggering all of them and dealing damage, starting with the first target and reducing in damage the further it goes.

Charging the attack up to a higher level will increase the damage. That's it, as far as I can tell...no extra enemies hit, no extra stagger. (It already staggers everything)

On the plus side, that means you don't have to charge at all if you just want to stagger enemies.

WARNING: If your Unleash takes you to or past 100% Peril, you will immediately enter "about to explode" animation. Depending on your Warp Resistance, Unleashing the Surge staff gives up to 17.5% Peril, so anything past 82% might be dangerous (check you Warp Resistance).

The Surge Force Staff is king of staggering. Even on the shortest of charge the lightning will stagger any enemy that can be staggered (so no Monstrosities). It stops chargin Muties cold, it breaks through Bulwark shields, it will even (briefly) stop a Burster.

PLUS it actually deals MORE damage the more armoured your target is. So while it sometimes struggles dropping Poxwalkers, it will deal huge damage to Maulers, Bulwarks and the like. (Did I mention it actually breaks through Bulwark shields? ;) )

Be the support your team needs, and your team will thank you for it. Don't be greedy for mass kills, just give all those baddies a quick zap and let your teammates dispatch them safely. Your time for killing will come when the enemy heavies show up! 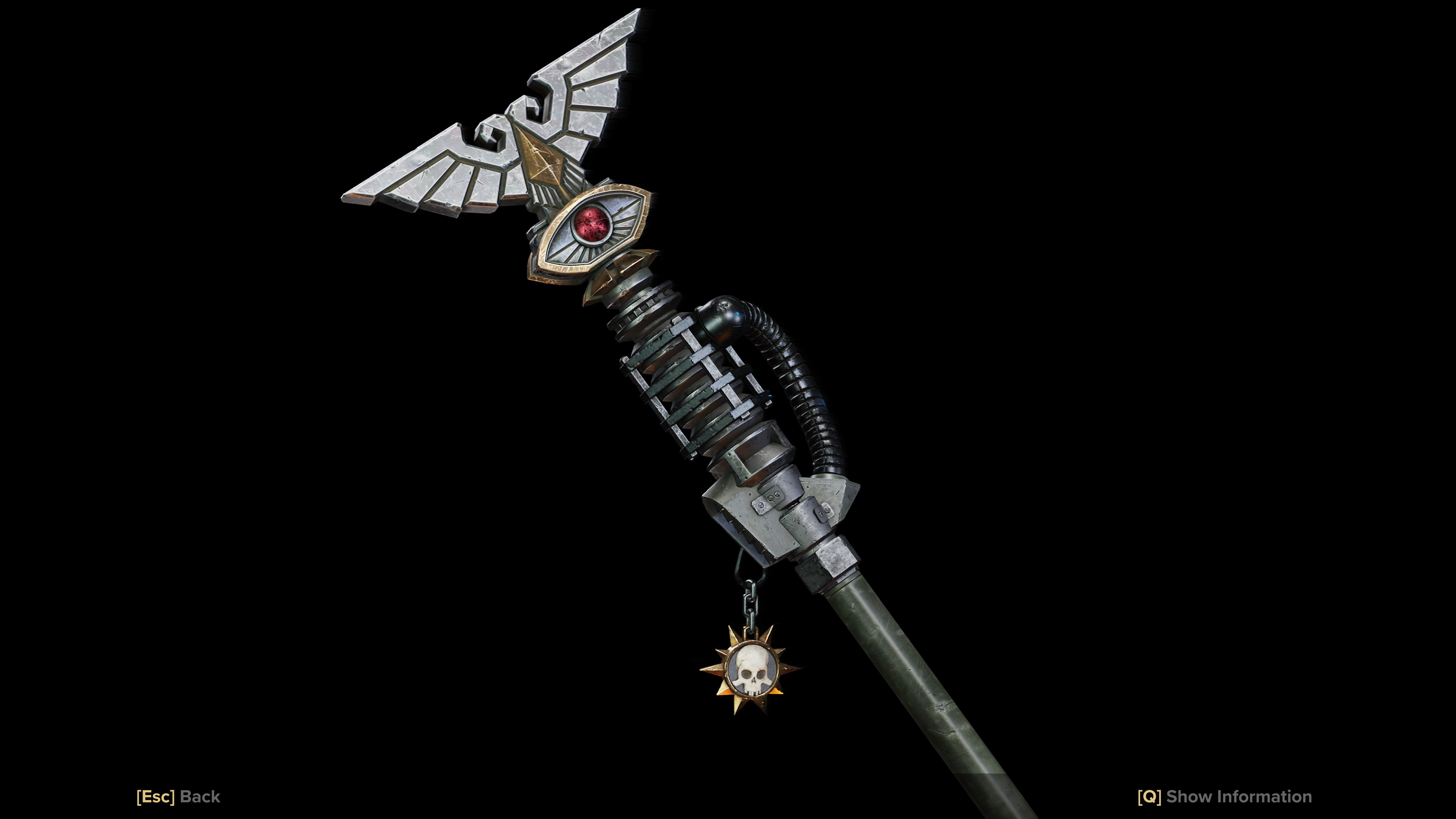 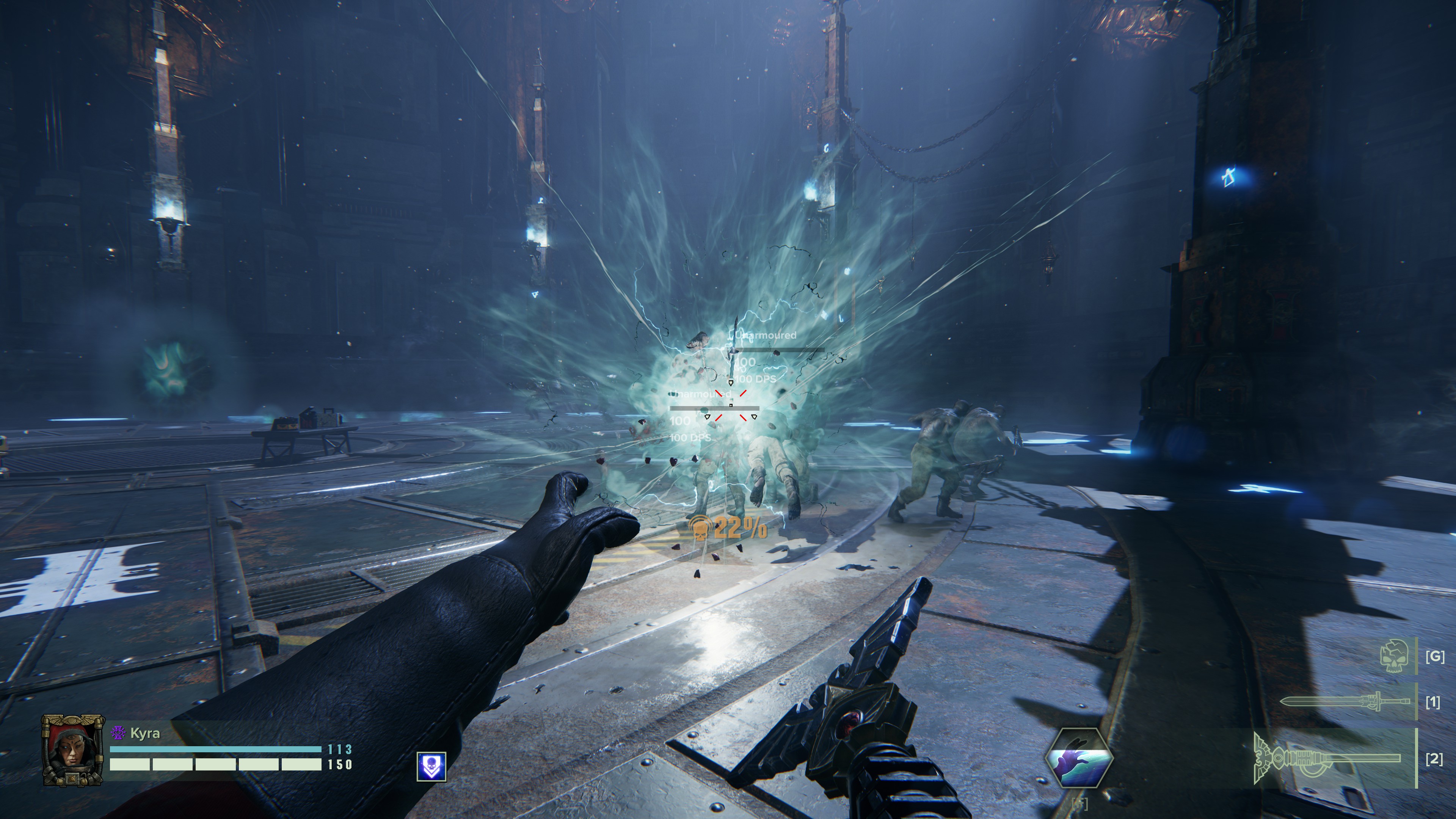 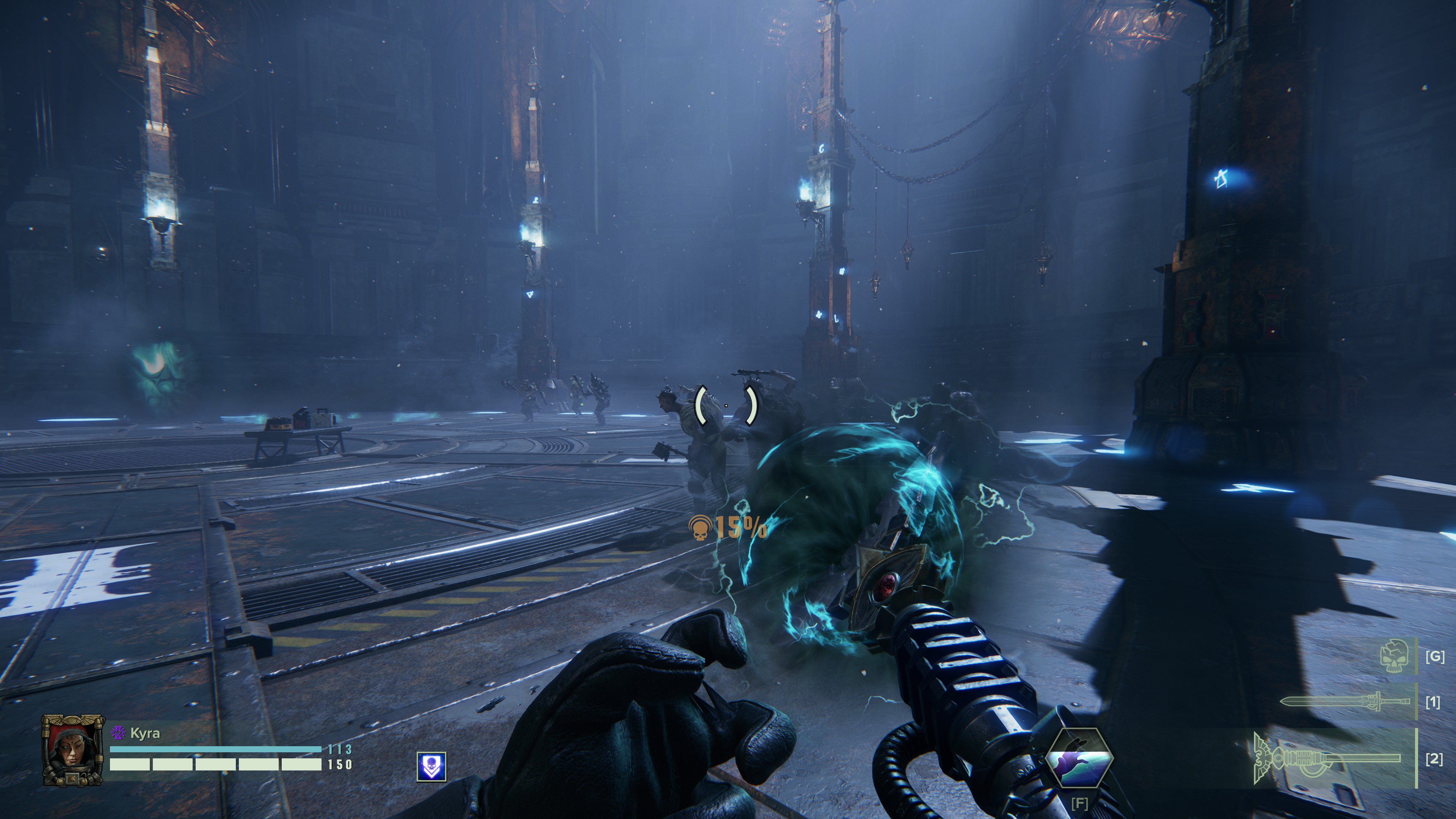 The Voidstrike Force Staff let's you fire off a warp blast that explodes on impact with an enemy AND pierces them to keep going and exploding and piercing and exploding.....

Charging your Secondary will gather a ball of Warp Energy at the tip of the staff which, when unleashed, flies and looks very similar to the regular Primary Attack Warp Bolt BUT which will explode on impact with an enemy, dealing damage and pushing/staggering enemies away from the blast. The Ball will then keep going, potentially hitting multiple enemies in a row and exploding every time.

Charging the attack up to a higher level will increase the damage (to significantly more than that of Primary Attack) as well as the number of possible targets hit. With the shortest charge the Ball will only explode once and not pierce but on the highest charge it caan pierce upwards of 5 enemies and keep going (I couldn't find a better angle in the Psykhanum to get a more accurate count.)

As far as I can tell charging doesn't affect the blast radius. (But the Staff has a stat for Blast Radius)

You're fine to Unleash your secondary as long as you're below 100% (99% is fine), even if the Unleash theoretically takes you past 100%. You will just enter the "warning state" animation.

The Voidstrike Staff strikes a good middle ground between offense and crowd control and of all staves it has by far the highest range for its Secondary, if the user is able to aim it well.

It's devastating if fired into a horde head-on, but even short charged Blasts can help stagger a group of enemies and give even a distant comrade some breathing room. It's stagger rate is severely less than that of the Surge Staff, though. It will not bother Muties or anything larger or heavier like Maulers etc. it also won't stop a Burster (though it might kill him at full charge). Bulwark shields will stop it cold, resulting in no further penetration even at full charge.

And don't bother aiming for weakspots, you won't get a relevant amount of bonus damage.

The Voidstrike Staff is a "jack of all trades, master of none" kind of weapon. It can do well in most situations, but it struggles against large and tough enemies in particular. It also depends very much on the users abilities of aiming and positioning, much more so than most other staves. 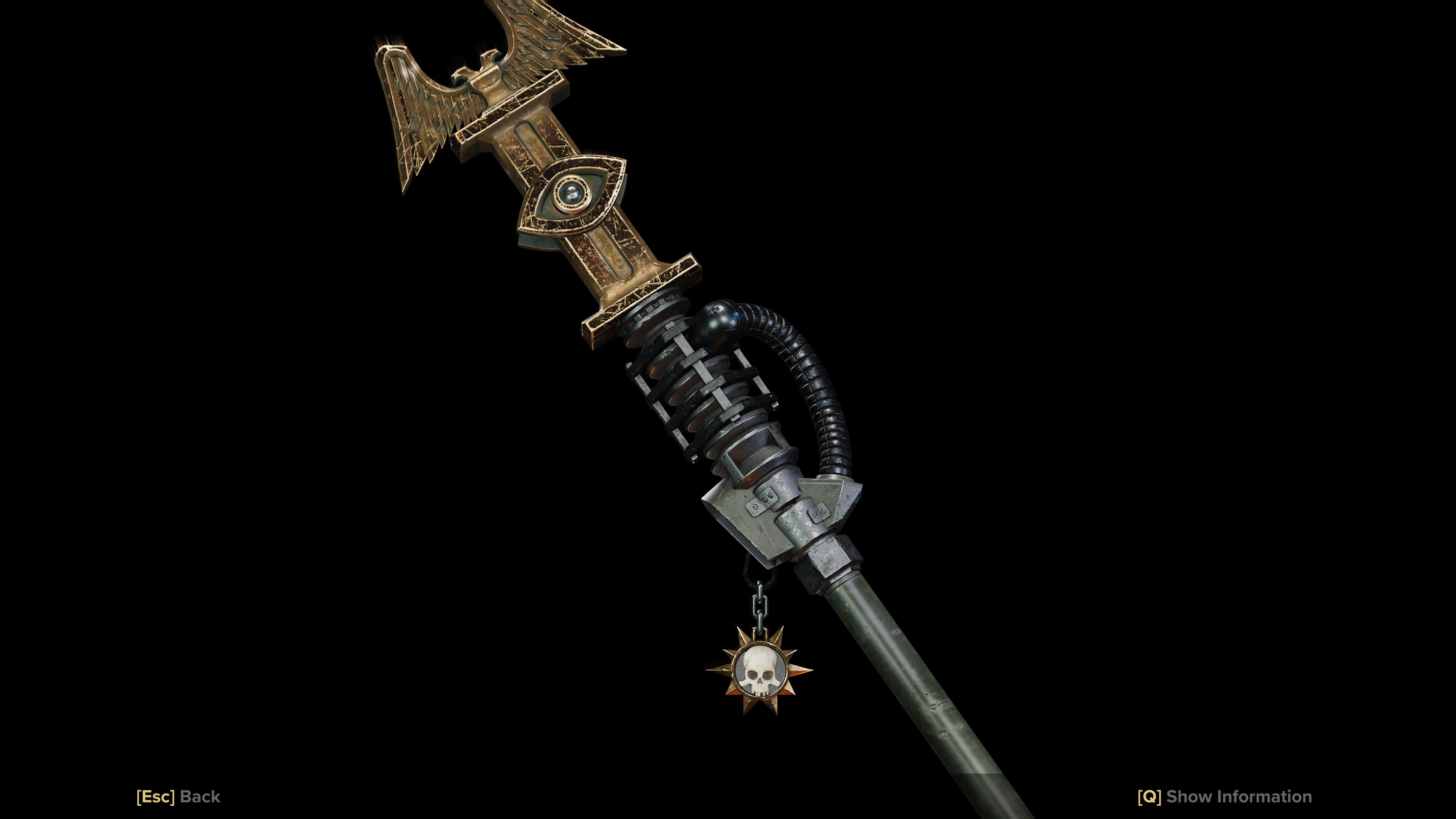 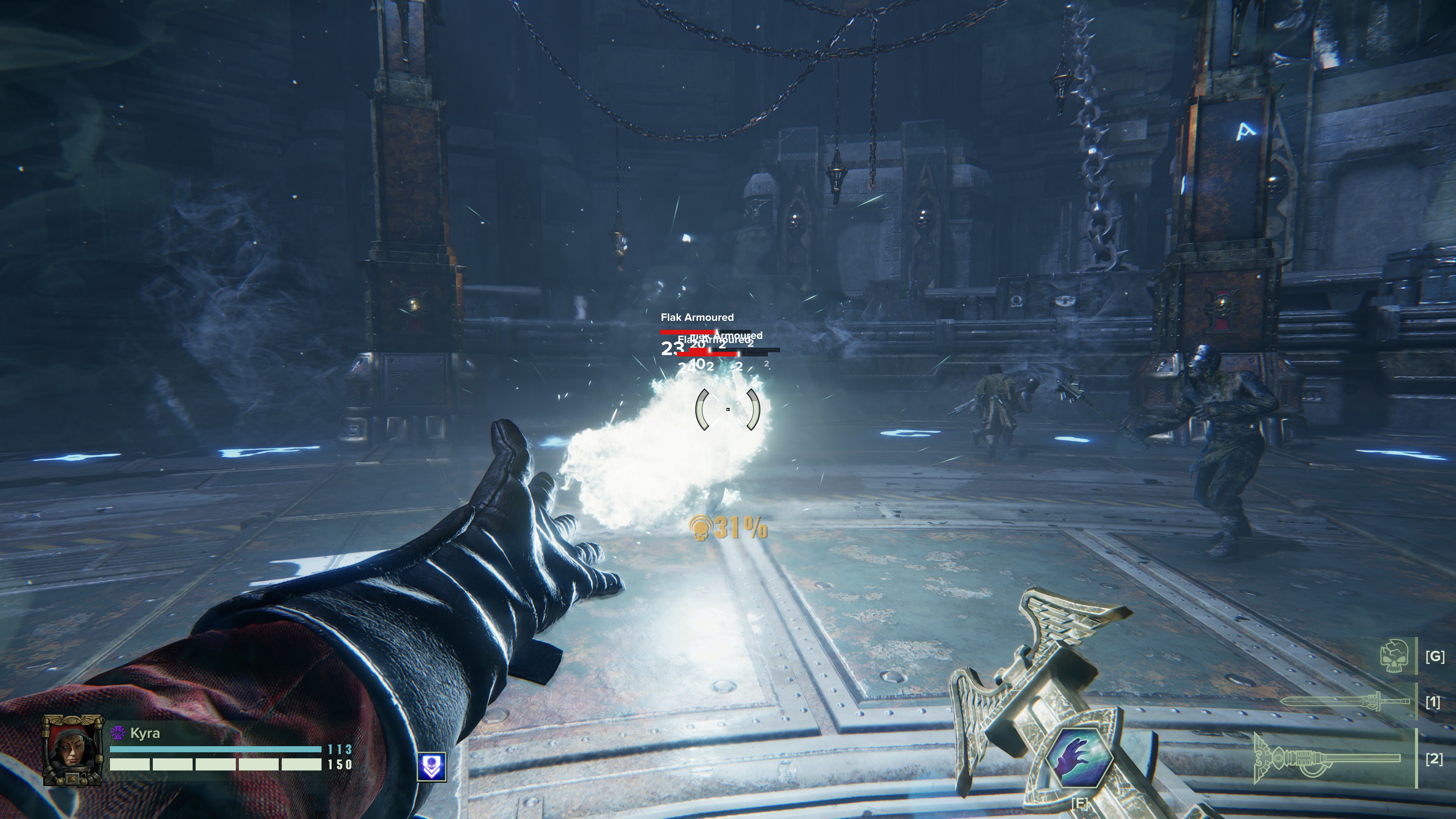 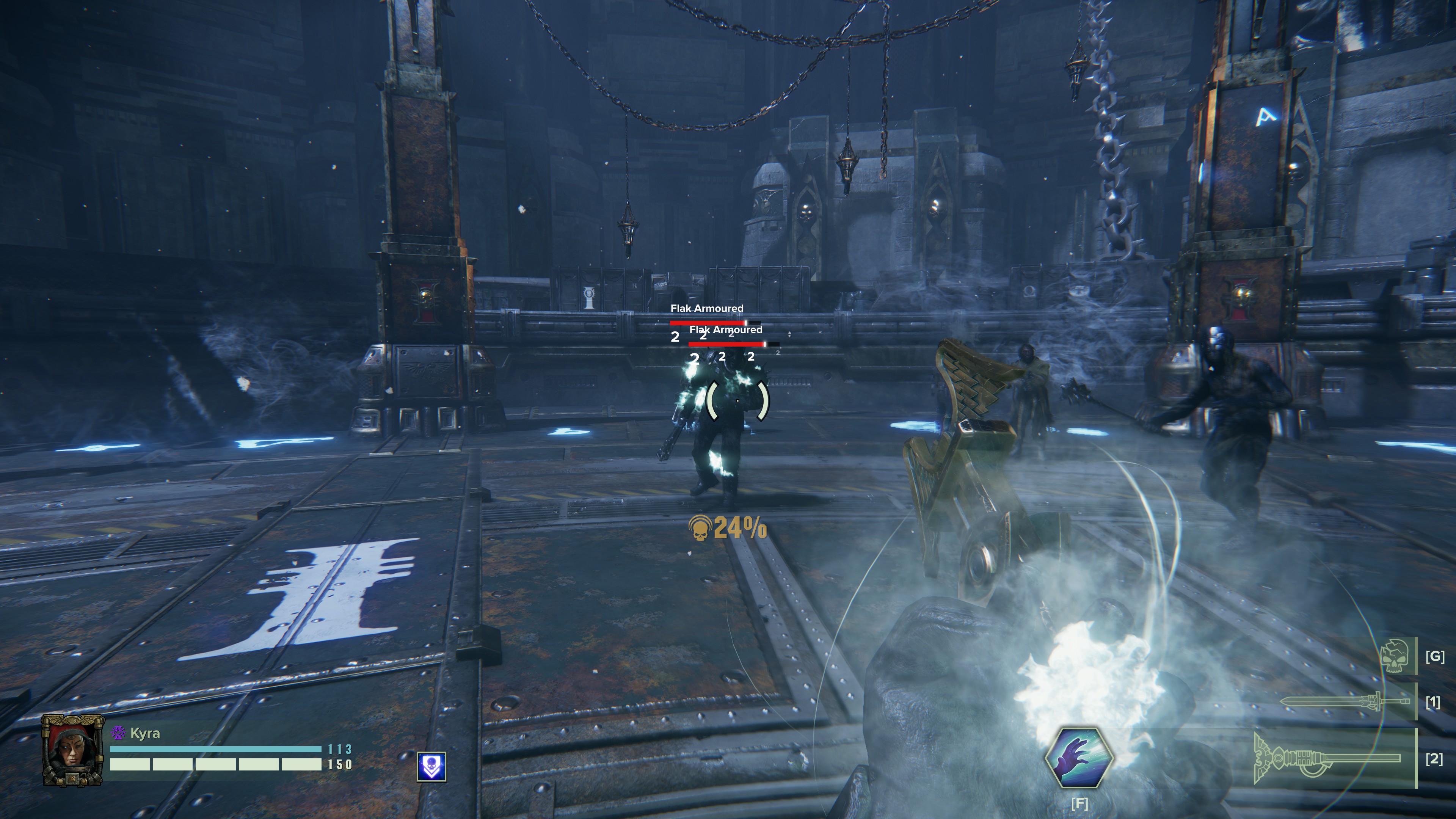 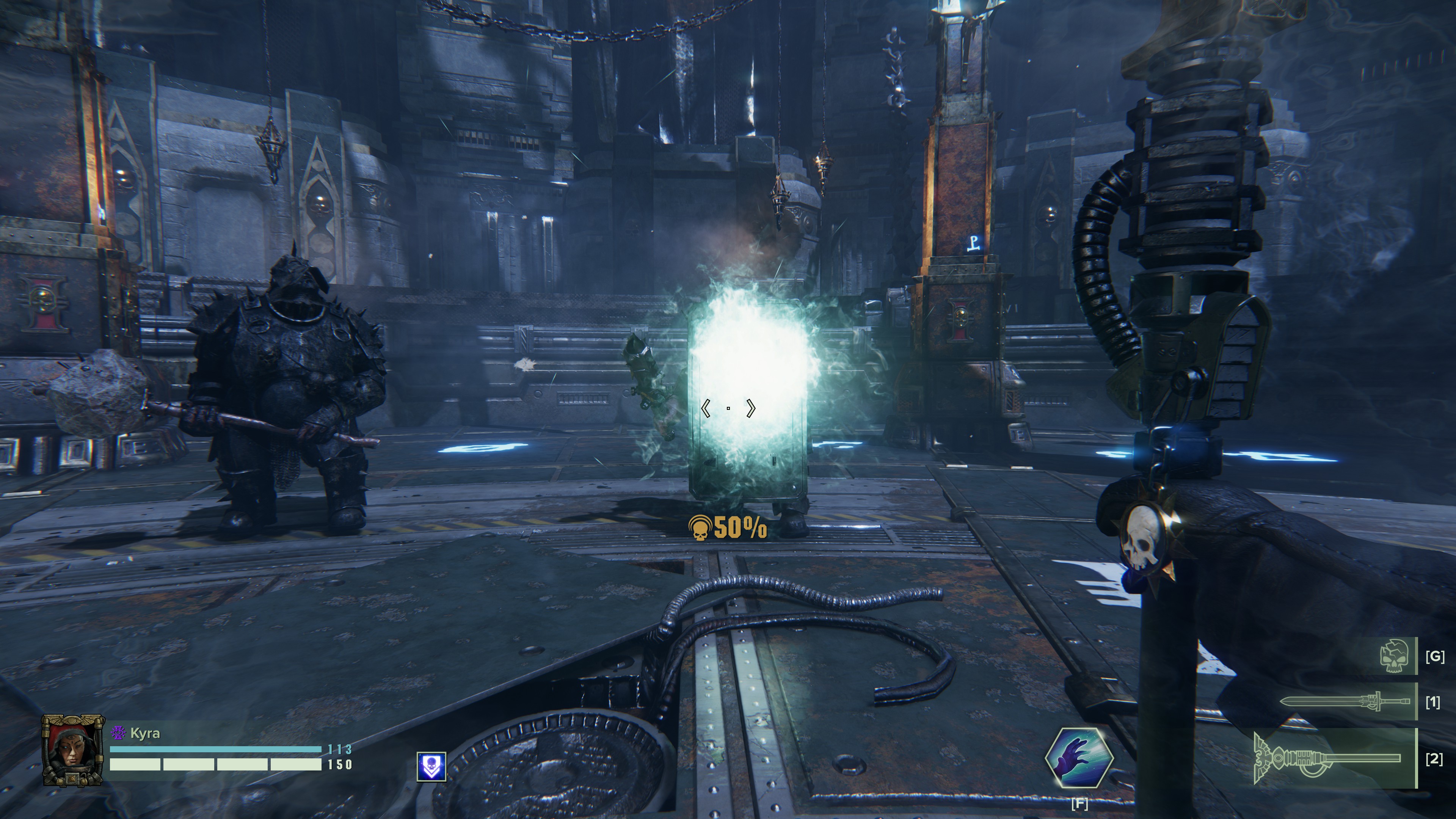 The Purgatus Force Staff let's you gather Warp Energies in your hand and fire them off in a stream of Soulfire Flames that set the very souls (and bodies) of your enemies blazing in bright white light.

First off: This staff has a unique Primary Attack. It does not fire a blast of Warp Energy, as the other staves do, but it fires a short puff of Soulfire at the enemies. This can hit and damage multiple enemies and will Suppress enemies, but it is rarely enough to kill on its own.

When you Charge up the Secondary of this staff you will gather flames which, when unleashed, are cast at the enemies similar to a flamethrower's plume, only bright white instead of orange/red.

Enemies hit will be damaged and set ablaze with stacks of "Soulblaze" which damages them over time.

The Peril cost to Unleash the attack are higly variable and depend on the time you charged beforehand. They can be cut short if you release the Secondary Attack button early, thus stopping the attack.

Charging the attack up to a higher level will increase the duration and thus amount of flames you can pour out in one go. This potentially increases damasge as you can hit enemies longer/multiple times, or allows you to move your aim to fan out your flames and hit more enemies.

When Unleashing the Purgatus staff, make sure you release the Secondary Fire button before your Peril% hit's 100% or you will (most likely) immediately enter the "about to explode" animation.

The Purgatus Staff is mostly good for roasting hordes, or at least groups of enemies. It can melt most types of enemies pretty evenly, but will deal next to no damage to Carapace armoured enemies. It will also be stopped cold by a Bulwark's shield.

The Purgatus Staff is relatively limited in what it can do, namely melt big groups of enemies. However, there are multiple Feats that play around with the "Soulblaze" mechanic, so there is something to be said for a Build that centers on the Purgatus Staff.

[Note: It is currently uncertain if the Feats and Staff actually interact and also whether they are meant to. I'll try to investigate further and upodate here.]