Unlike other Factions, Tombkings are not primarily limited by the amount of Territory they can hold. A single Tomb King province can actually support 4 pretty formidable armies, wheras other Races might need multiple Provinces to support just one. Instead, the limiting factor is time.

At the same time Tomb King Garrisons are pitiful and their limited amount of Armies would spread them thin trying to defend a vast empire. So rather than taking a lot of territory, Tomb Kings need to be picky about where to settle and surround themselves with allies and vassals.

They also want wars to take place nearby so they can play both sides of the conflict for maximum profit. This is their main source of income and more importantly, canopic jars. If one party ever gets to strong through conquest or making alliances, they need to be brought down quickly, or the profits will cease. In addition to their free armies, this makes the Tomb King economy the most war centric out of the non-horde factions, even more so than norsca or greenskins.

In summary: The Tomb Kings empire is built in stone only as much as it is written on paper.

They prefer to leave their Kingdoms defense to their Vassals and Allies so that they are free to go on the Hunt for more Vassals and the Books of Nagash ofcourse. 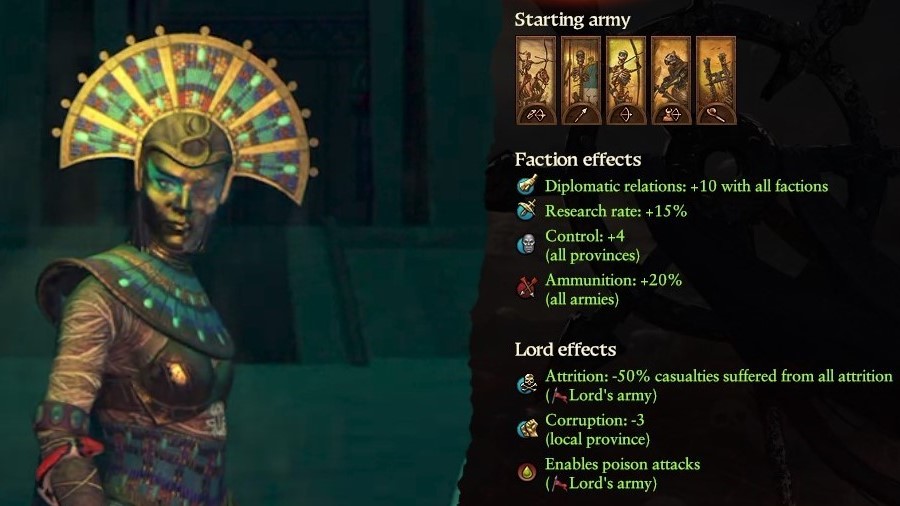 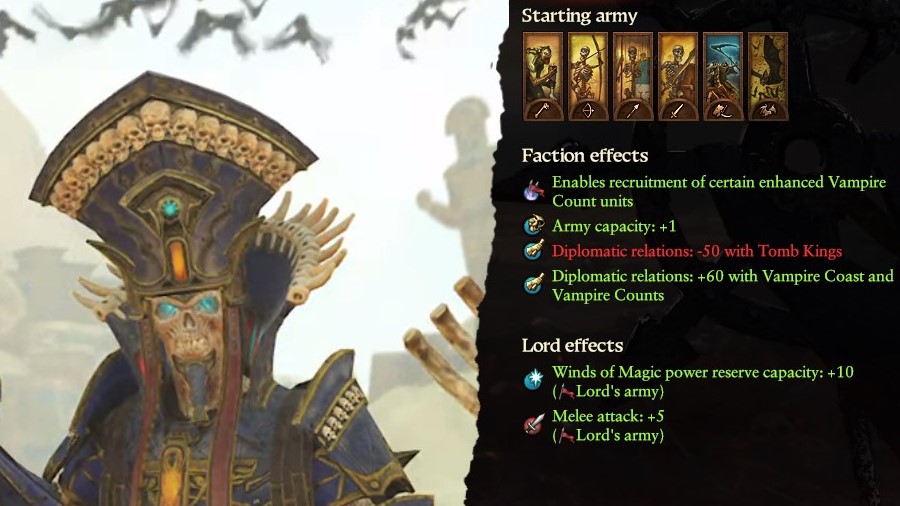 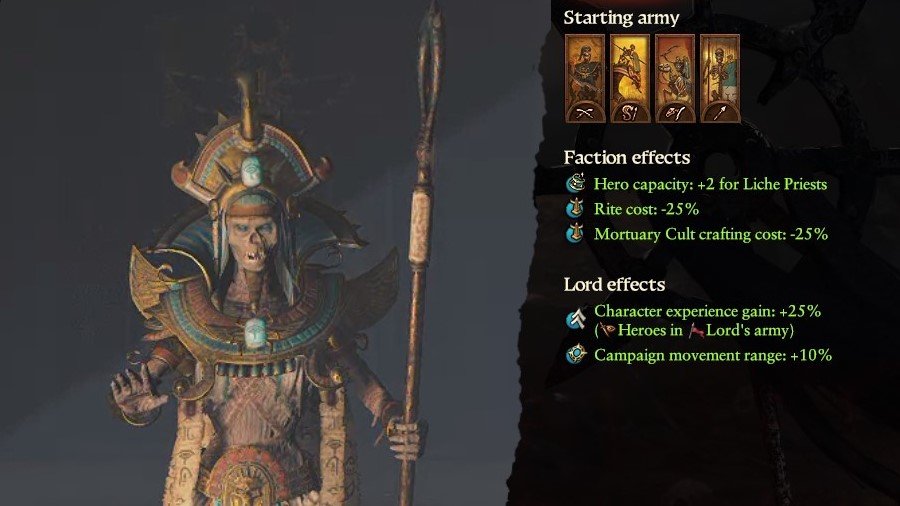 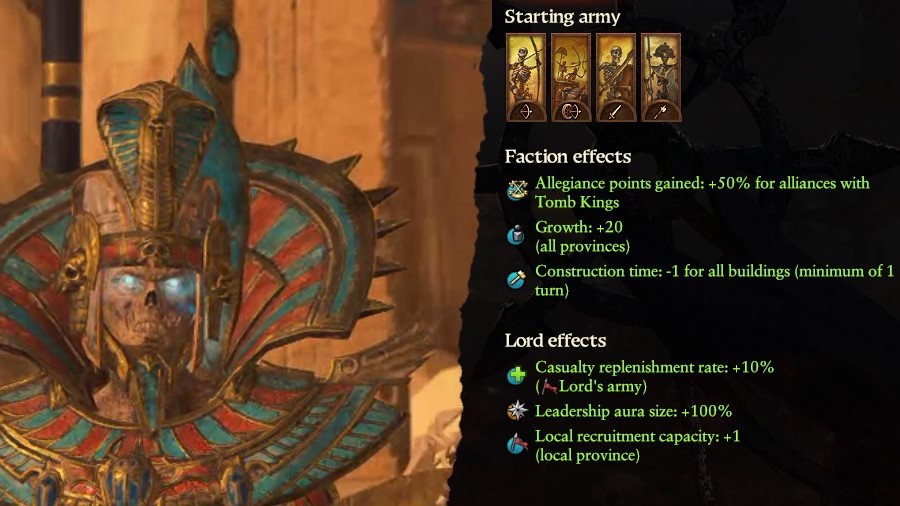 The Factions Attributes cause them to lean more heavily into certain aspects of the Tomb Kings general gameplan.

Followers of Nagash - Arkhan the Black

Khemri - Settra the Imperishable, Khemrikhara, The Great King of Nehekhara, King of Kings, Opener of the Way, Wielder of the Divine Flame, Punisher of Nomads, The Great Unifier, Commander of the Golden Legion, Sacred of Appearance, Bringer of Light...

Individually, Tomb King Units are inferior to other Races counterparts, so they will lose in a conventional fight. Because of this Tomb King Armies need to specialise and work together to reach their goal. Here is an example of how to support four distinct armies (meaning they don't share unit types) with only 6 minor & 6 major settlement slots while also making effective use of General Skills and Unit Synergies.

While these armies are designed to perform best in a certain situation, they can still fill all other roles - just less efficiently.

This Army is meant to lie in Ambush over a chokepoint, like a narrow mountainpass.

If the invading army is either heavy on ranged units, or low on armor, or leadership, it is going to have a bad time. Dwarves for instance won't immediately flee in terror from a Tomb Scorpion, but they will lose their siege engines and many ranged units in the ambush. Skaven on the other hand might have the speed and numbers to prevent a full surround, but the morale shock of being ambushed will quickly rout their army.

The wide Infantry core holds the opponents army in place:

Nehekhara Warriors trade favourably with most other Infantry, except for high armor melee units.

Skeleton Spearmen hold the line against Units that the Warriors would lose to, like Monsters, Cav & Elite Infantry.

Meanwhile the Constructs are free to pick their isolated Targets:

The Cavalry is only there to chase off fleeing Units, so it doesn't need to be fancy

I let Khalida wield this kind of army. While leading the band of Sepulchral Stalkers she makes full use of both her combat ability aswell as her unique passive (boosting the Stalkers ranged attacks)

Buffs the large amount of Constructs in this Army

Tomb King Garrisons are pitiful, which means that their kingdoms can quickly crumble unless watched over.

The Casket of Souls is great at defending settlements. Thanks to its high fire arc it does not suffer from being obstructed as much as other Ranged Units.

Carrion can be used to attack lone artillery, chase off routing attackers and protect the Casket of Souls from other flying Units.

Banishment is hard to evade in the tight corridors of the City Necrotect:

This army should be the first to enter uncharted territory, because it is almost indifferent to being ambushed. They can also wear down stronger Armies by picking off units until their ammunition runs out and then retreating.

Incite Rebellions by raiding & sacking unwalled minor settlements. This will lead to lots of small scale fights, which are a good source of Canopic Jars. This is also the way to revive dead Factions for later Subjugation.

Thanks to this Armies Speed, it can draw the fight out long enough to make full use of their Winds of Magic Necrotect:

(Battle) Lead & Heal the Cavalry, which form the Anvil to the Hammer that are the Chariots. Tomb Prince:

Tomb Guard are the most durable Infantry Tomb Kings can field, while the Hierotitan & Ushabti provide the strength to break through City Gates and Infantry Formations.

Ushabti with Greatbows are better at demolishing city walls and towers than the alternatives (Bone Giant/Catapult/Casket) while also being able to contribute to the melee fight.

Keep in mind that although they can shoot down walls with ease, Ushabti with Greatbows don't have the Siege Attacker trait, so before the Lord gets it himself through the Sphinx-mount, or a Hierotitan can be added to the Army, a Tomb Scorpion can be a good substitution.

Skeleton Horsemen may be the least impressive Cav Tomb Kings can field statwise but they have Vanguard Deployment and may slip by the opponents Defense, taking undefended capture points or atleast distracting more valuable units for a time.

The Lore of Nehekhara has many cheap buff spells, which are mediocre on their own, but become great thanks to the Lore's passive - an Army wide Heal to any non construct units.

Skullstorm is a low cost Vortex Spell with 0% Armor Piercing, which is actually great because this means it can be used without worrying too much about friendly fire.

Due to their weak Garrisons and limited number of armies, Tomb Kings are reliant on allies and vassals to protect their cities - with vassals obviously being the preferred choice. The main advantages of Vassals over Allies are

They cannot declare war on their own, meaning they won't drag you into wars against another Ally

They generate Allegiance Points at a faster rate, allowing you to effectively puppeteer their armies

If a war is declared, they will always take your side

In short, vassals are simply more dependable, which Tomb Kings value highly. Getting a faction to subjugate can be a lengthy, tricky process though. Because of this it is best not to laserfocus on vassalising one particular faction with brute force. Instead, try to make sure your neighbours are in a perpetual state of war, so they will grow to hate each other while liking you. Here is how to do this:

Breaking up Alliances is tough, so it is best to prevent them from forming in the first place.

Break up Non Agression pacts / Trade Agreements / Military Access between two factions by attacking one of the two and taking one Settlement. Then offer them Peace and that settlement you just took in exchange for them abandoning their treaties. If you do this elegantly, they will quickly forget your transgressions while growing to hate each other.

If two factions are at war, offer one to join their side. Beat them down just a little, then offer peace in exchange for them abandoning their treaties. You can sweeten the deal or gain some extra money by giving them back the settlements you took from them.

Over time this will shape your neighbourhood to be more condusive to successful Vassalisation Since this is Total War, factions are constantly dying in every part of the world. Sometimes all it takes to get an easy vassal is simply having made contact before they are wiped out. This is where the Tomb Kings abundance of Heroes in the midgame becomes very useful.

A good place to look for eager Vassals as Khalida is to the North, where Karak Azul will die to the Skaven in the early game and later Thorgim will struggle against the Greenskins unless you swoop in to save them.

Having many contacts also means that factions will randomly give you money for inconsequential deals, like non aggression pacts or wars that are too far away to matter. 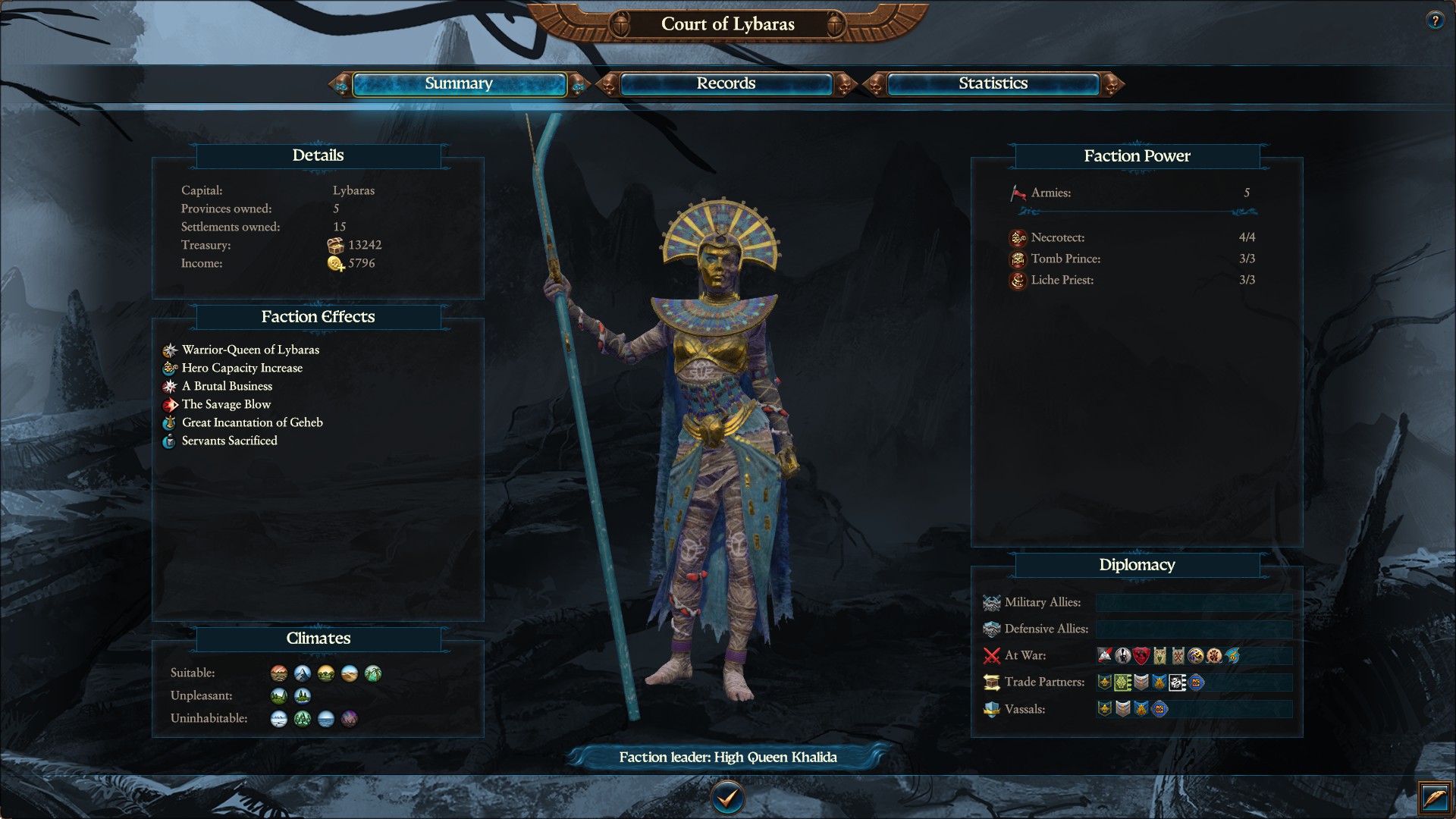 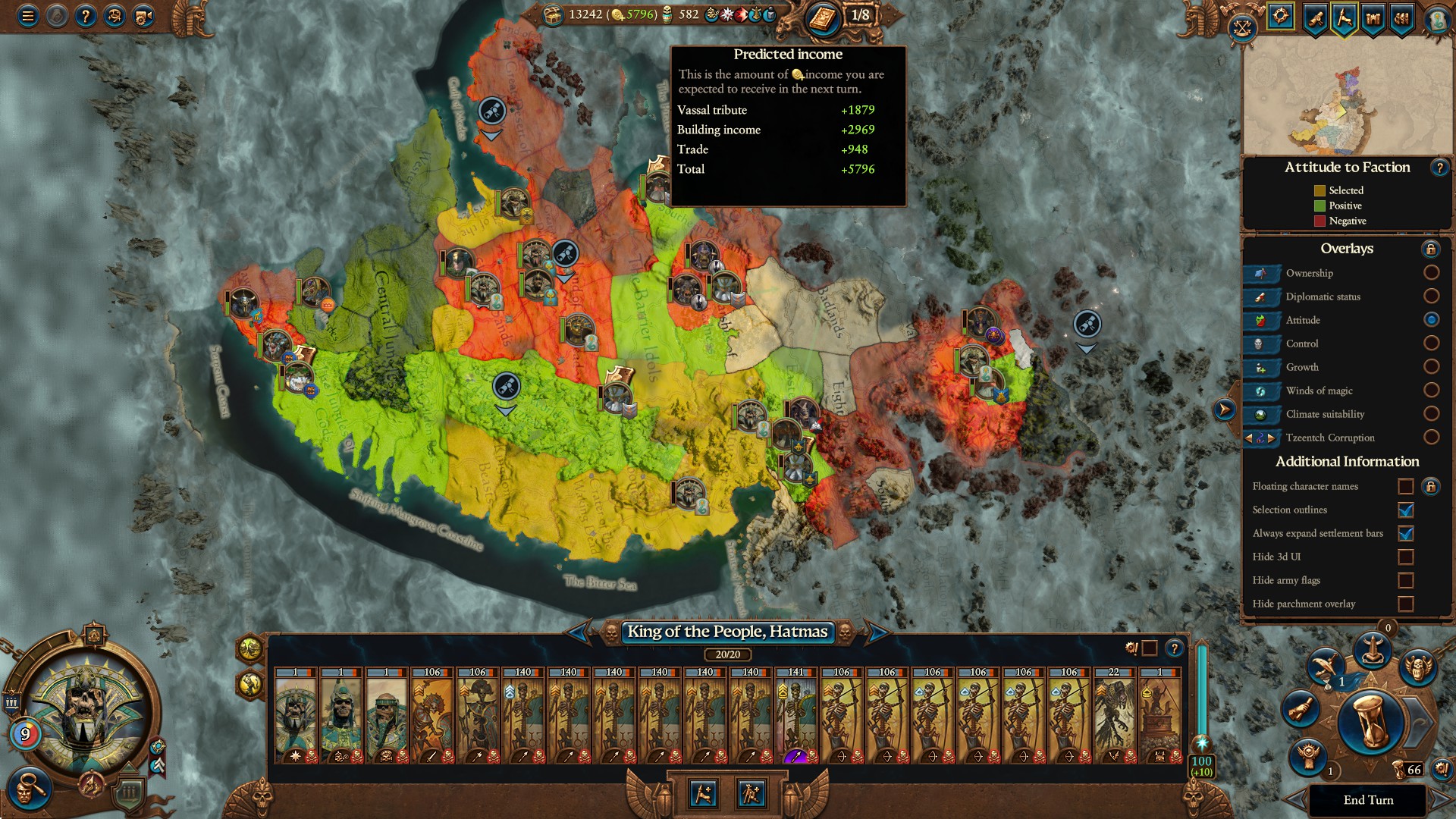 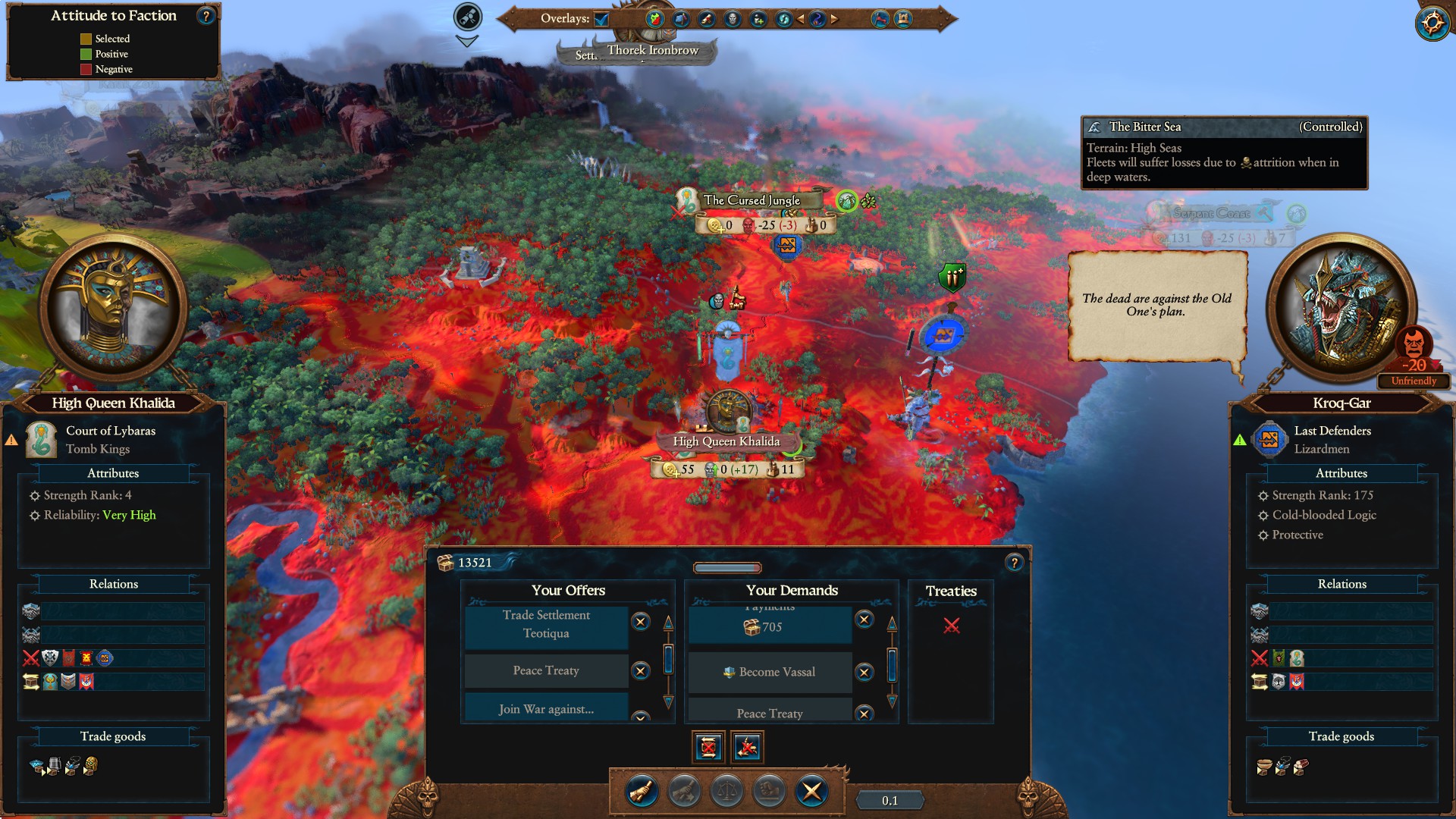 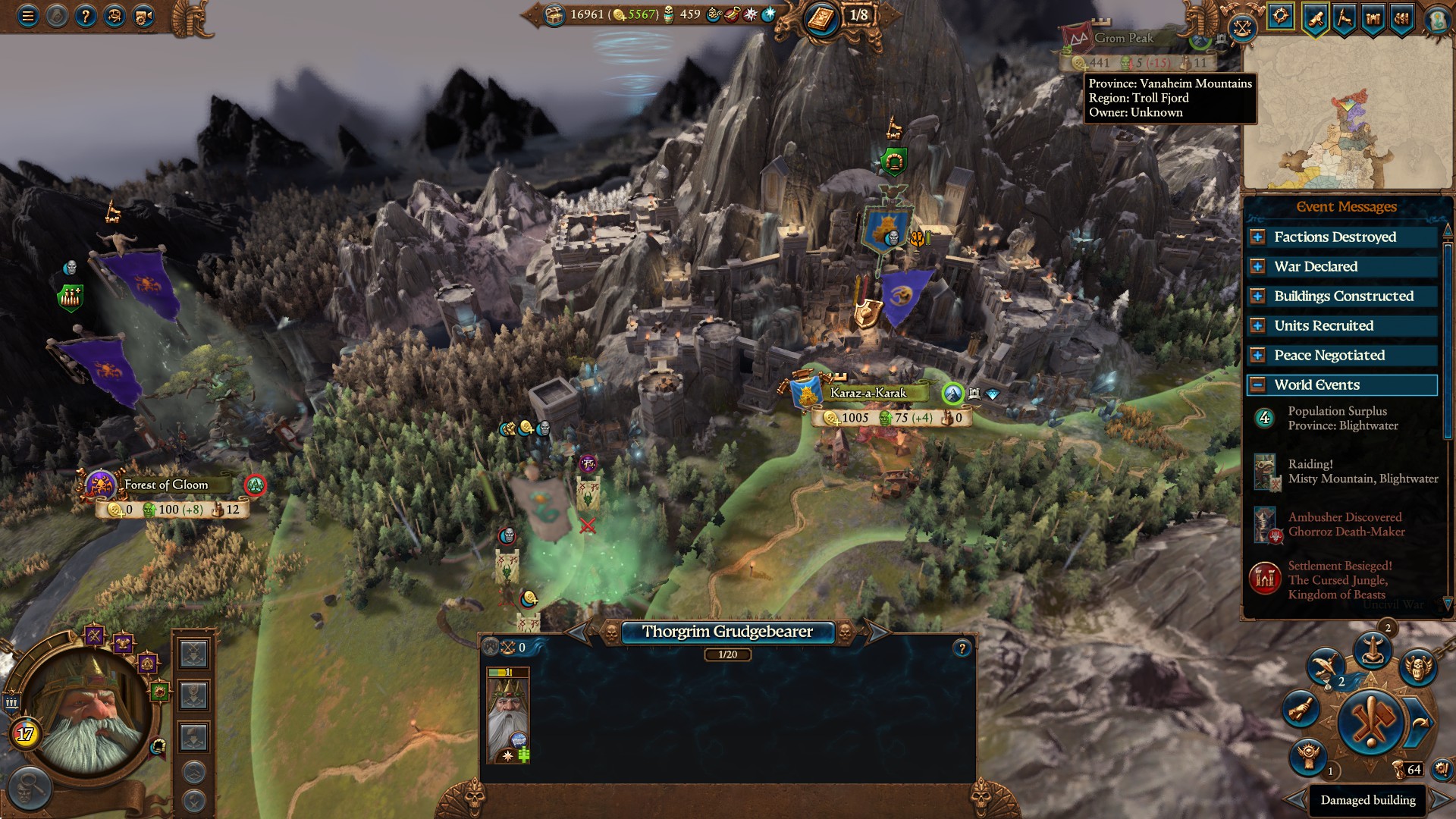 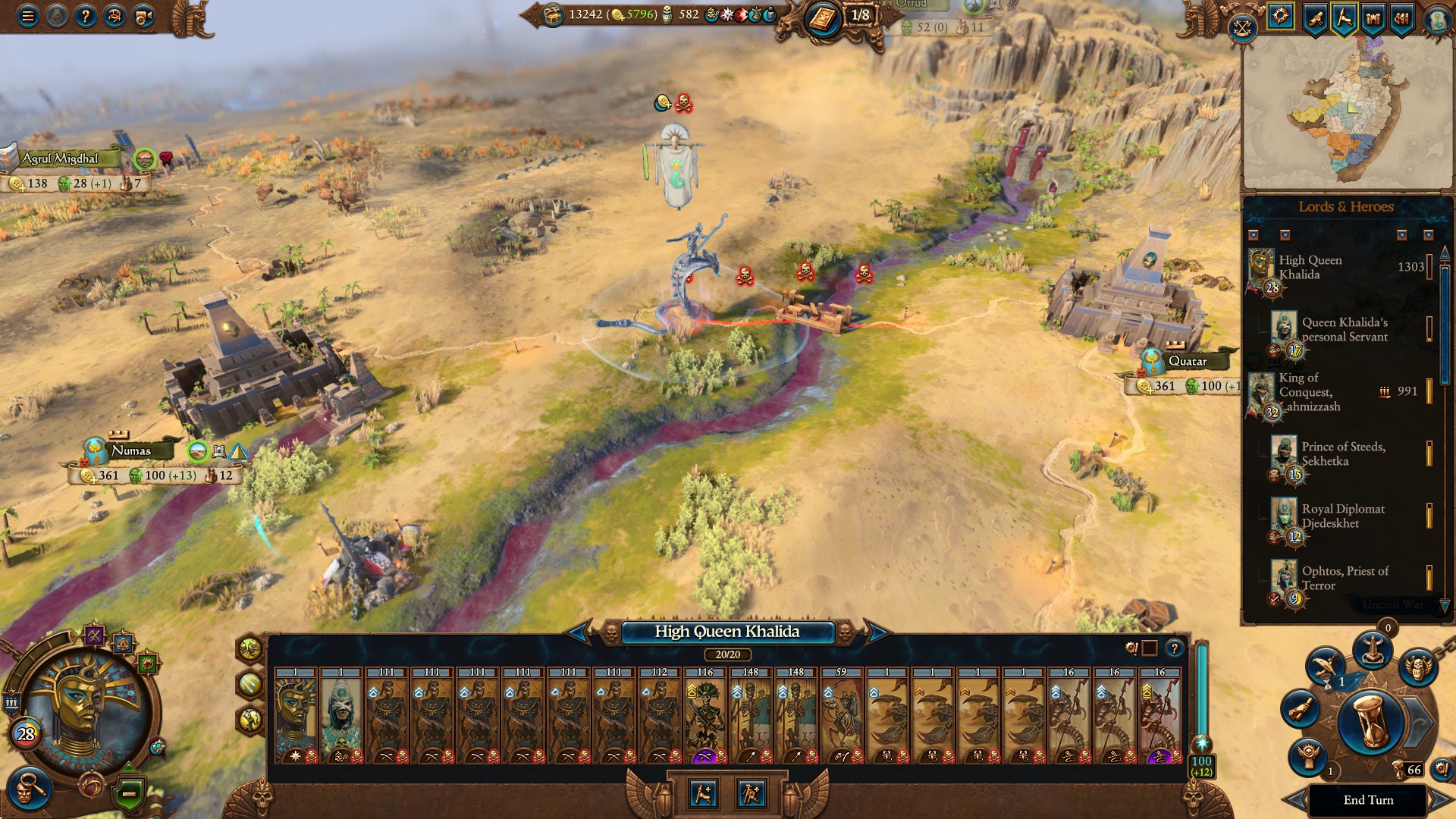 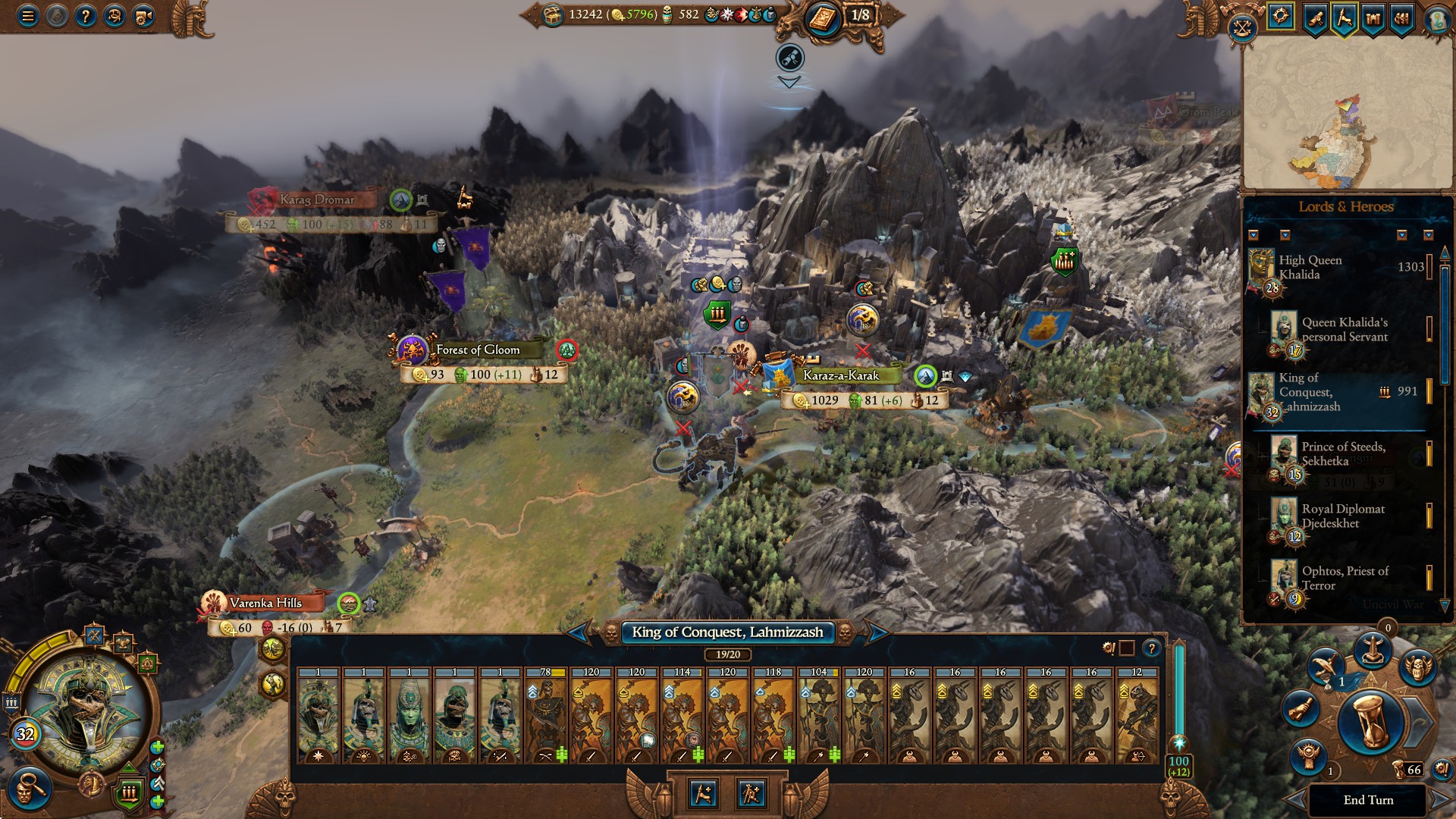 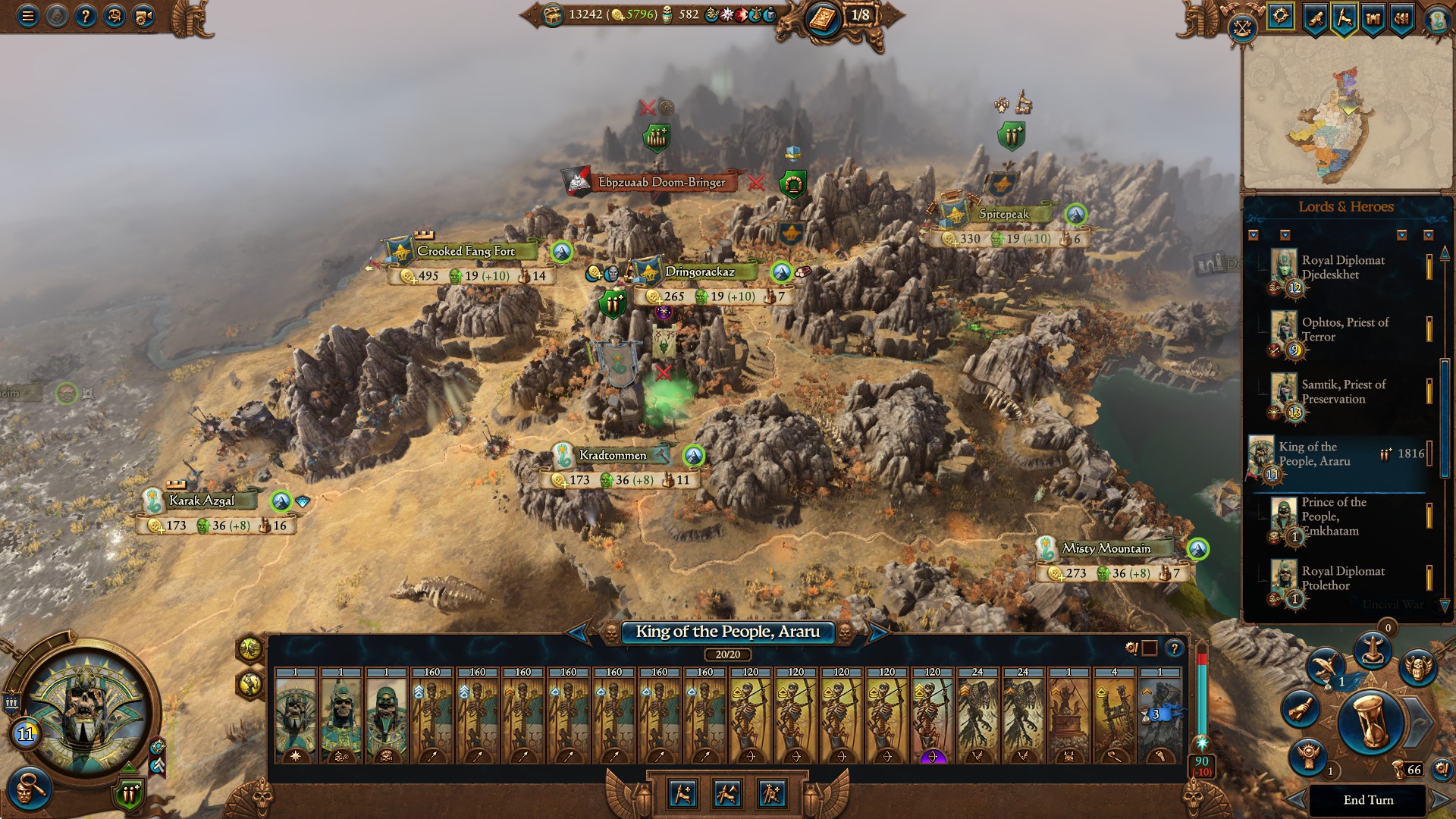 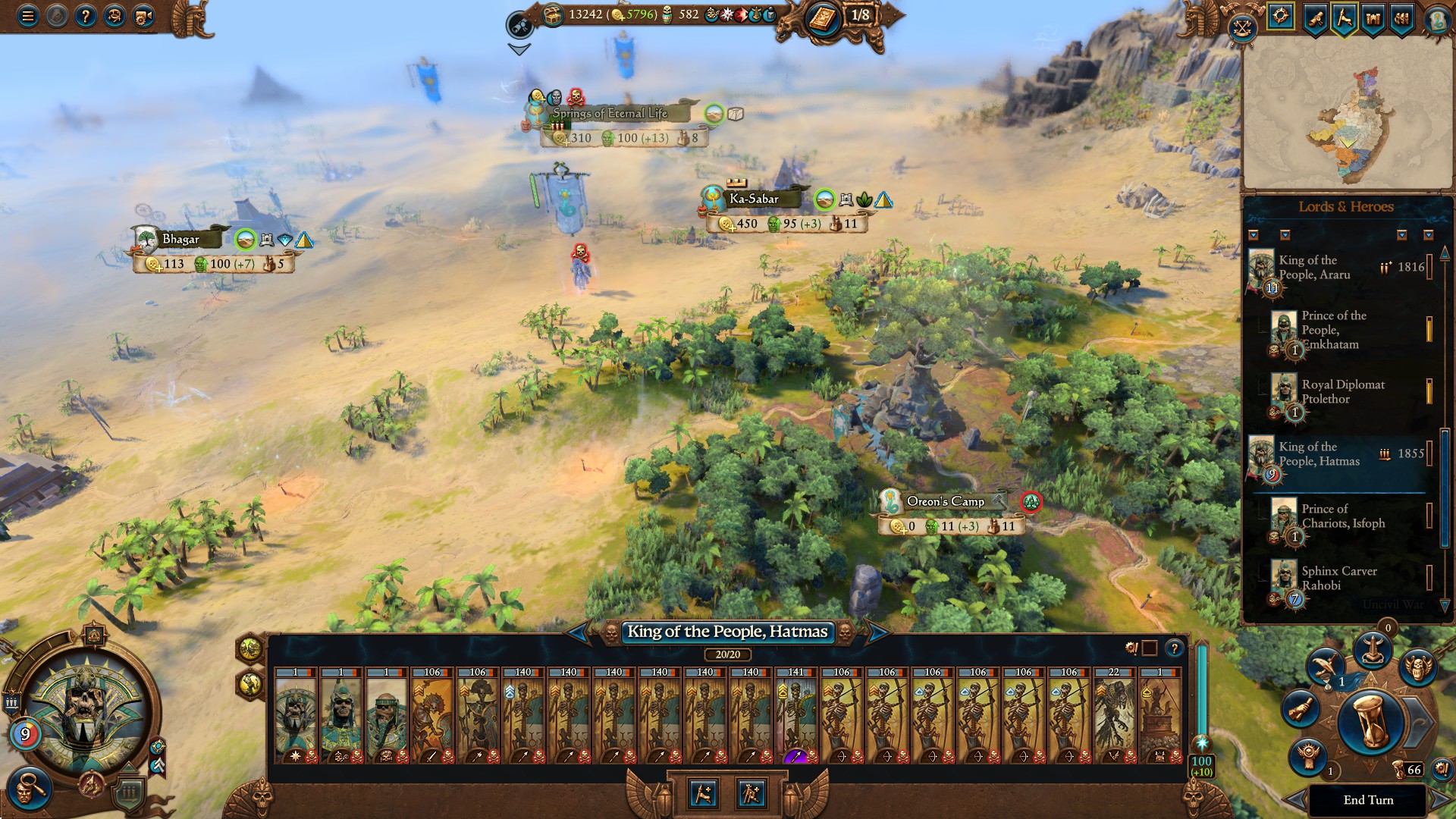 How did we get here?

Turn 23 I vassalised Kroq Gar early on in the Campaign. He has been busy fighting the skaven and daemons of tzeentch to the south since then.

Turn 30ish Next I vassalised Karak Azul, who were surrounded by Skaven and Greenskins.

Getting this Vassal was fairly easy, keeping him alive was the hard part.

Turn 42 Thorek Ironbrow randomly had a moment of weakness, allowing me to vassalise him in exchange for a minor settlement. He must have suffered a defeat somewhere in the Desert, making his faction strength just low enough to seal the deal. I didn't get the Book of Nagash from his settlement yet and don't ask me how I'm going to do it because I don't know :D thankfully the bonus it provides isn't game changing.

Turn 64 I encountered Thorgim on the Brink of Death on my way to Castle Drakenhof - another easy vassalisation.

Armies and what they're up to

Other Cool Stuff I Found Out

Lightning Strike is amazing against Greenskins because it takes their Waaagh out of the fight.

If a provinces ownership is split between yourself and your vassals, you can still use commandments.