If you are like me, then you absolutely love the easter eggs that Croteam enjoys tucking away in their games. The Road to Gehenna DLC is no different! This guide is intended to be a complete guide for all of the easter eggs located in the DLC, along with a screenshot of each easter egg. If you have found an easter egg that isn't currently covered in this guide, leave a comment (with an optional screenshot) with instructions below and I will add it to the guide (with appropriate credit given). 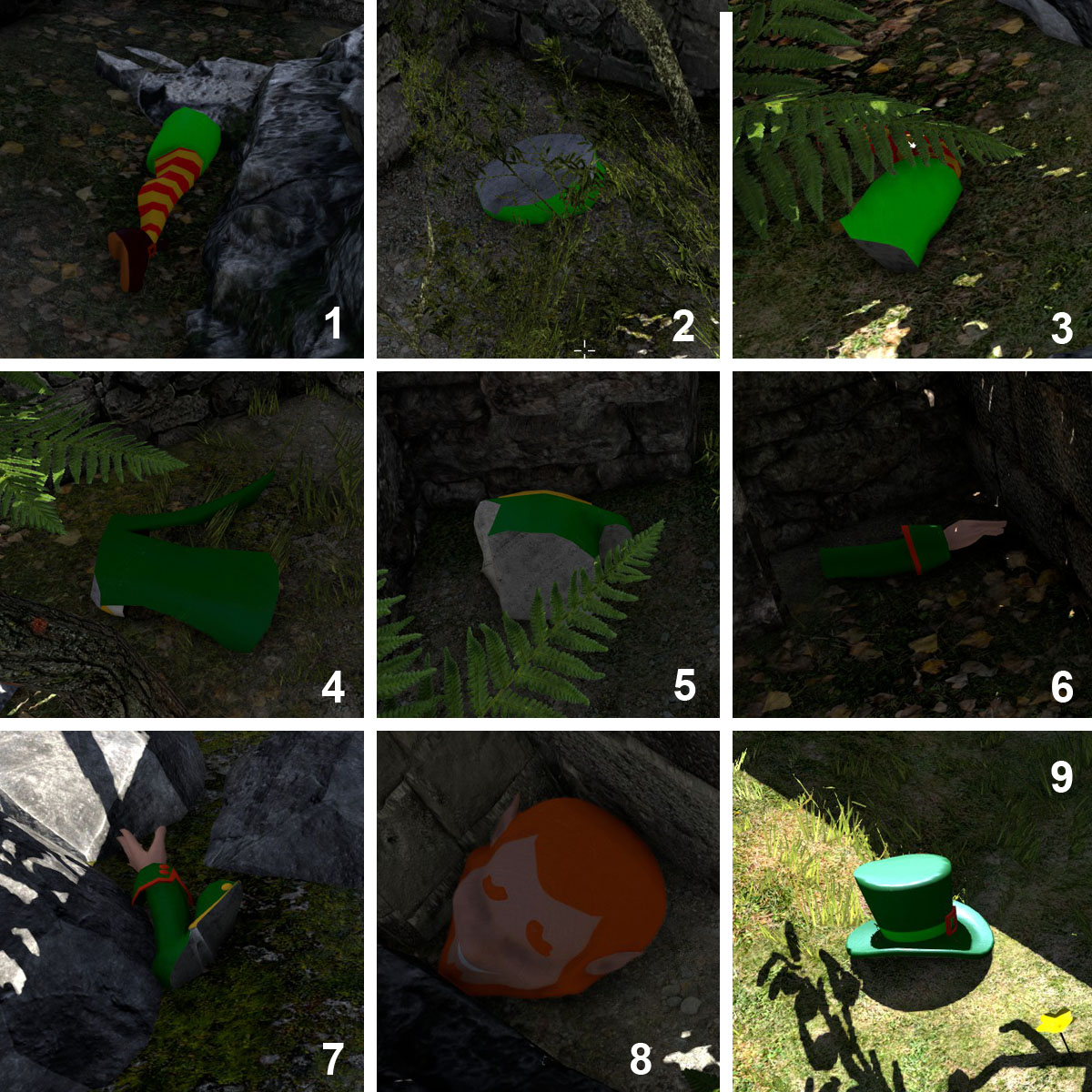 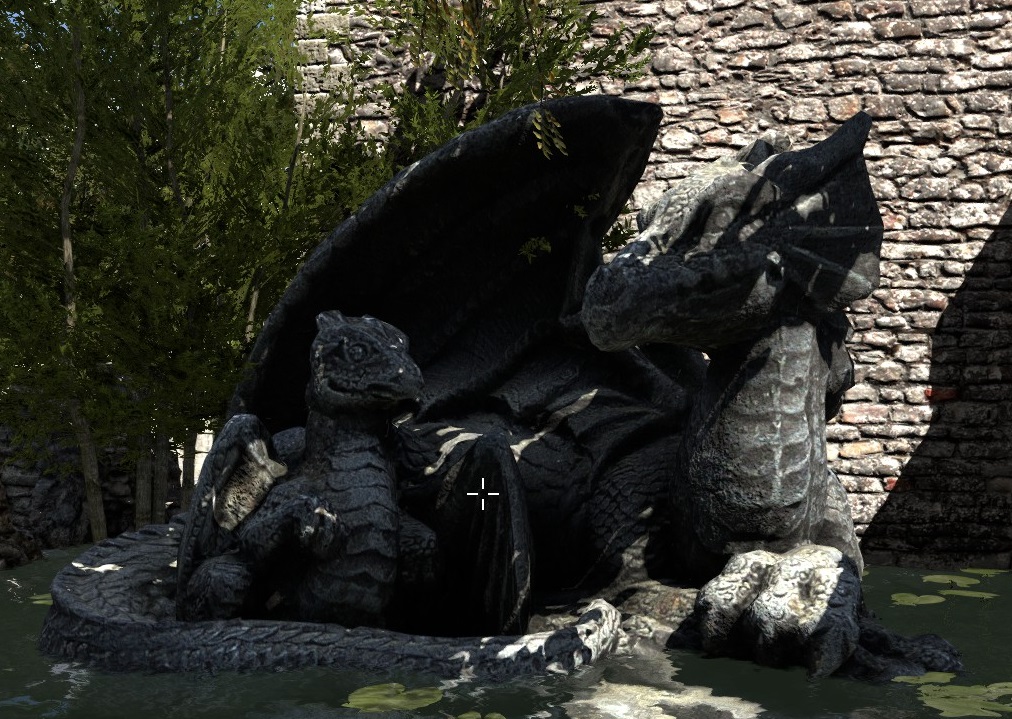 LEPRECHAUNDid you complete the Gnaar statue scavenger hunt in C1 of the base game? Well get ready for Statue Assembly v2.0! The assembly location is right behind the entry portal, on a small pedestal. The locations listed below are in the order of assembly and the description is based on which of the three courtyards the object is located.

#1 - Left Leg: Behind a small pile of rubble in the center courtyard, to the right of the puzzle, Through a Window.

#2 - Lower Torso: Located behind a bush in the center courtyard, to the right of the puzzle, Through a Window.

#3 - Right Leg: Nestled in some rocks and bushes in The Swapper courtyard.

#4 - Mid Torso: Behind some rocks in the center courtyard, to the left of the puzzle, Through a Window.

#5 - Upper Torso: Behind some bushes in The Swapper courtyard.

#6 - Left Arm: Located in a dark crevice in the center courtyard.

#7 - Right Arm: Nestled in some rocks in The Swapper courtyard.

#8 - Head: Located behind a short wall near one of the corners in the center courtyard.

#9 - Hat: In a secret area of The Swapper courtyard, you need to jump on a square stone to reach the area.

Once you've completed the statue, you will hear the music stop, thunder roar... and then nothing else. What happened? Well, you've essentially unlocked something that will happen near the End Game. Trust me, this unlocked secret will be impossible to miss!

HERE BE DRAGONS #1Bring the box from Open Field into the main hub of the level. This is done by setting it by the wall next to the puzzle entrance and use the box to hop onto the wall and into the main hub area. Once the box is in the hub, set it on the short wall to the left of the puzzle entrance to Open Field. Hop onto the wall, pick up the box behind you, and jump to the next wall. Use the box to reach the parapet and then the tower. Once in the tower, jump into the hidden courtyard to find the hidden dragon. 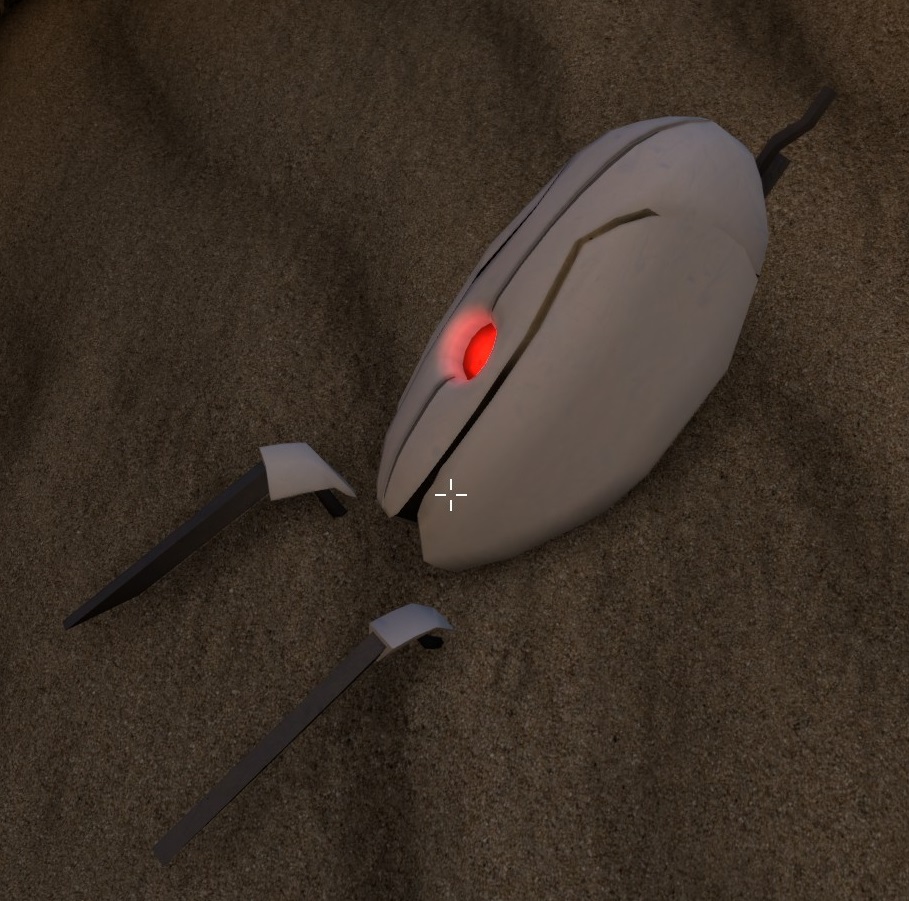 PORTAL TURRETSolve Bunny Hop to reach the top platform. From this platform, sprint jump into the courtyard with the red and blue receivers (aim for the left pillar). Use the rock stairs to jump onto the wall to find a portal turret partially buried in the sand. Stand around and listen to several hilarious lines being delivered!

SERIOUS SAM TEXT ADVENTUREIn the area between the puzzles Haircut and Cube Driver, you will see collapsed beams forming a ramp. Follow the ramp onto the top and jump to the next beam. Follow the path and jump onto the two columns, until you reach the ledge just below the large pillar. If you look carefully, you will see a blue floppy disk in the corner. Pick it up, bring it to any terminal, and load the thread to launch the game. Have fun! 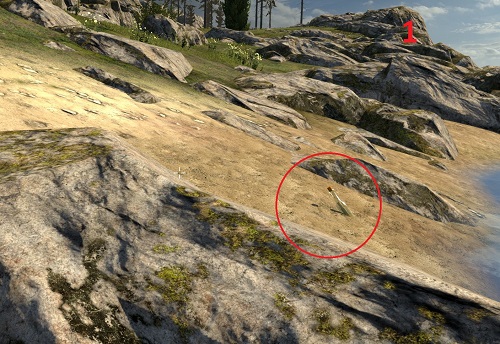 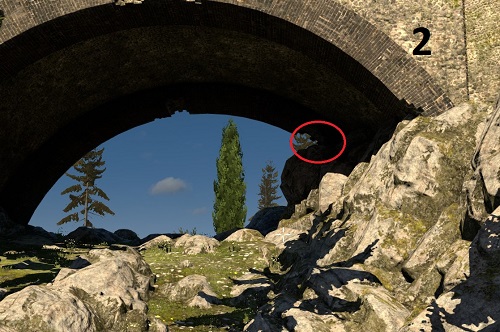 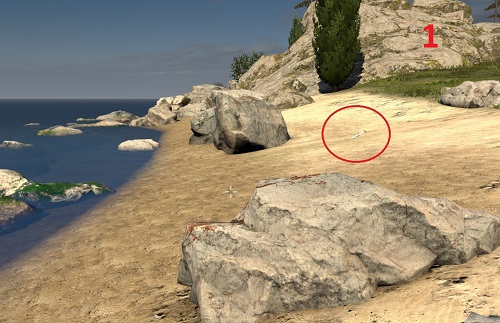 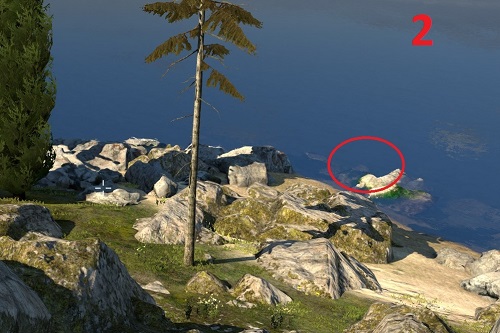 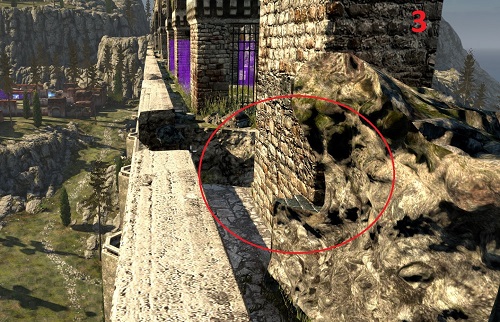 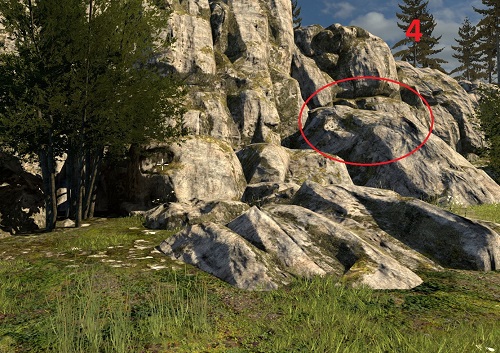 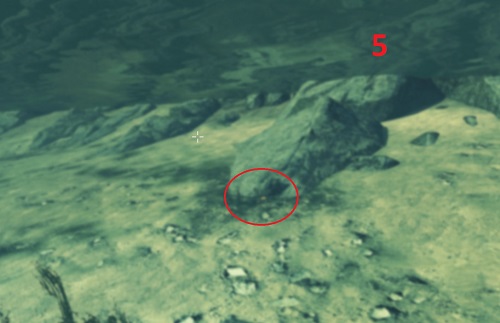 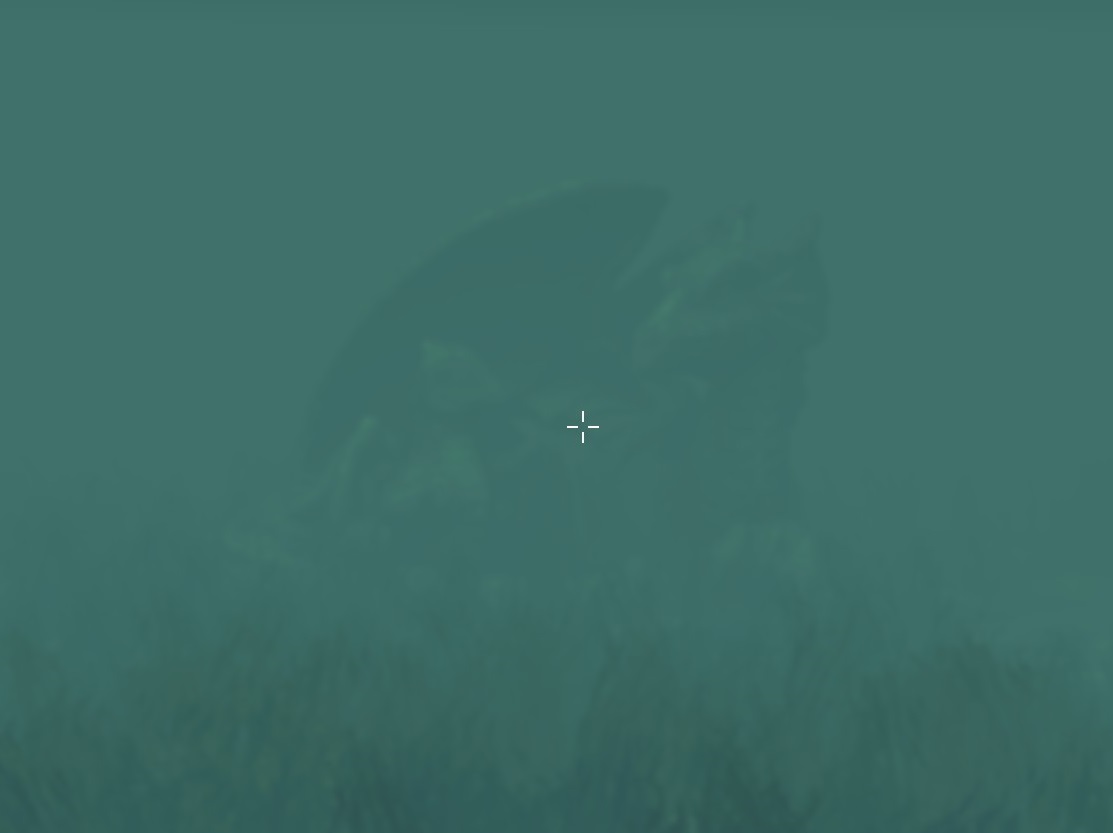 MESSAGE BOTTLE TREASURE HUNT #1In this level there are two "chains" of message bottles that contain maps/clues to the next bottle. Follow each clue to the final treasure.

#1: Located along the sandy beaches behind the puzzle, BFF.

#2: Using the clue, climb the rocks in front of BFF under the aqueduct to find the next clue. You will need to leapfrog from rock to rock in order to locate the bottle.

#3: Head to the puzzle, Harmony, from the entrance, walk under the aqueduct, over the hill and follow the bottom of the cliff face to your left. When you reach the scrubby tree, look up the cliff face at a fern bush. You will find one of the Croteam developers leisurely sitting down and enjoying the view!

MESSAGE BOTTLE TREASURE HUNT #2In this level there are two "chains" of message bottles that contain maps/clues to the next bottle. Follow each clue to the final treasure.

#1: The first bottle located along the sandy beaches close to the floating star.

#2: As the clue shows, follow the coastline until you see a dead tree nestled amongst three live trees. From this point, head into the water and look in the crevices between rocks and sand underwater. You will find this bottle cruelly hidden in a dark corner.

#4: From here, head to the next location (you should be able to pinpoint the exact spot from the current location), near the tall tree in the distance. About 30 feet from the tree, jump up onto the rocks to find the bottle hidden amongst them.

#5: Located directly across on the other side of the channel, as shown in the map. This time you are looking for a gold ring underwater, so scour underneath the shoreline for a faintly glowing object. Pick up the object to discover an interesting side effect.

HERE BE DRAGONS #2When you pick up the first bottle clue in the second chain (see directly above) the map will show a dragon with the caption "Here be Dragons". If you head to this location underwater, you will find another dragon statue in the murky water. Be careful, since this is right on the edge of the reset invisible wall. 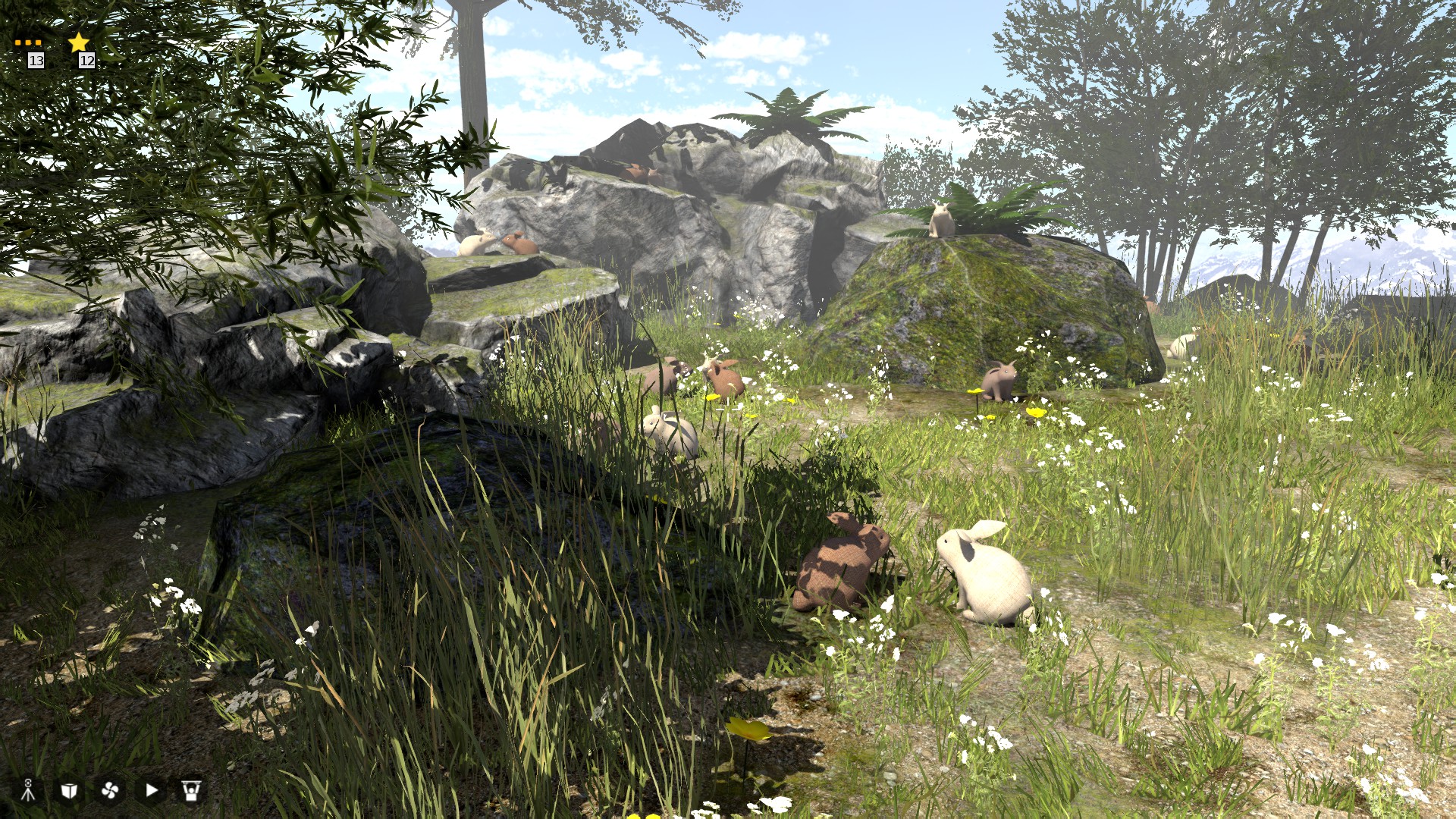 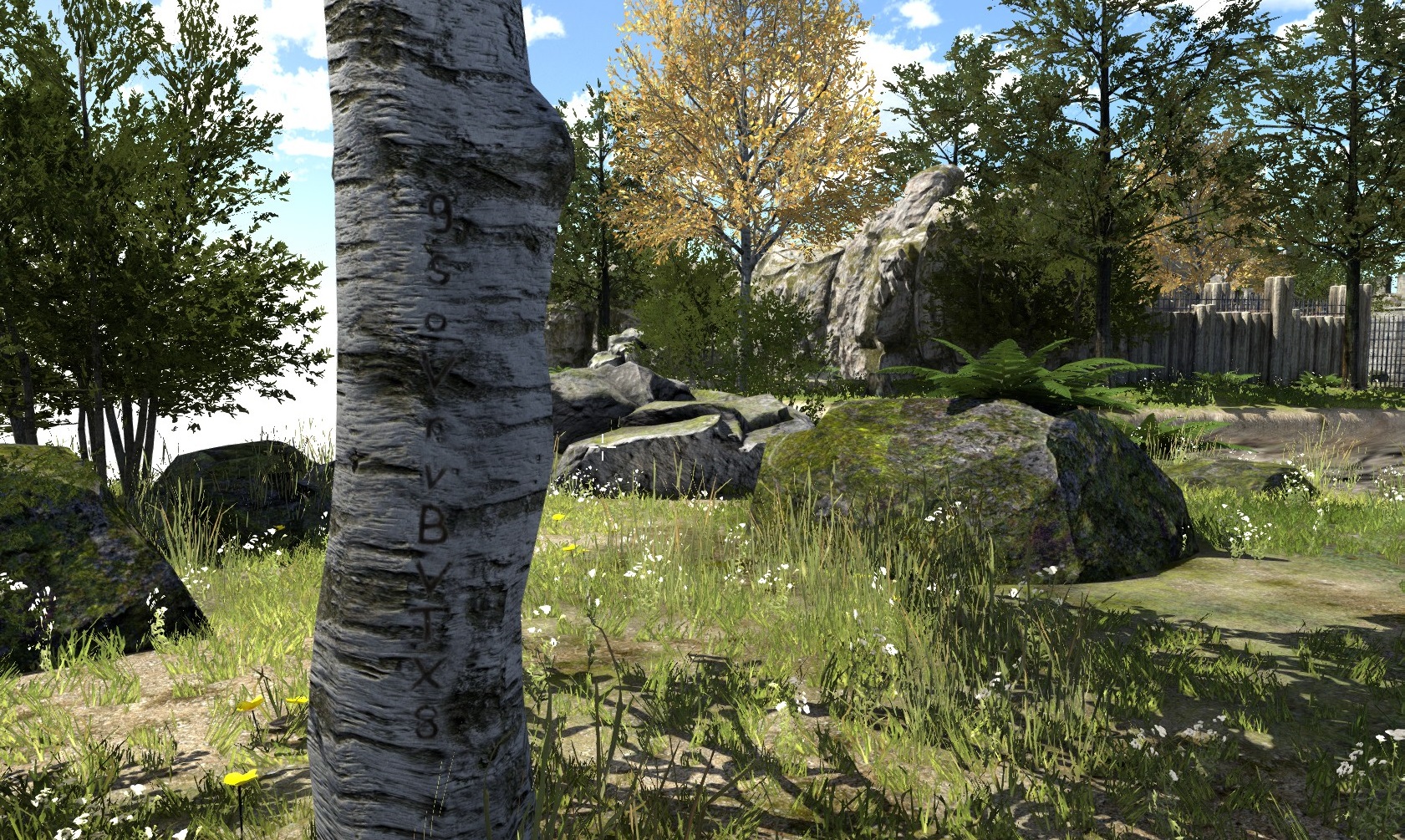 JERUSALEM TEXT ADVENTURELocated in Colliding Beams, head to the pool within the puzzle. Check out the gargoyle’s mouth to find a secret floppy disk. Boot up any terminal and load Jerusalem to start the game. There are three different stories, each with multiple branching paths. Each story has an impact on other stories and can eventually lead to all three characters reaching their goal. For example, taking the Minotaur’s axe in the Artist’s journey will help the Scholar cut wood to write longer.

Huge thanks goes to Spooky, who took the time to map out the optimal path to completion to minimize redundancy. I am not going to map out every single choice, but rather write out the generic strategy for each "story". I will keep the story choice outside of spoilers, but put actual choices within the adventure within spoilers.

The Artist: Head across the Hills -> Answer Jerusalem to both questions -> (Receive flute) -> Continue to the valley -> Pass through the Labryinth -> Seek out the Minotaur -> Slay him -> (Receive Axe) -> Exit the Labyrinth -> Continue you journey Until End Condition

The Artist: Head by the river -> (Use coin) -> (Receive key) -> Walk by the Aqueduct -> Teach Exiles to rebuild (taught via Scholar's translations) -> Continue until End Condition

The Scientist: Descend into the Tomb -> Enter the Poet's Chember -> Tell the Poet about the Archive (Unlocked via Scholar's work) -> Descend and be lifted by spirit of poetry and wisdom -> Cross the bridge (Use key) -> Examine Seed -> Finished

BUNNY ISLANDLocated behind Colliding Beams, you will notice a floating island in the distance. If you zoom in, you will see it is full of bunnies. Head back to the main island and then jump into the fan that blows to the Colliding Beams island. If you bunny hop (perhaps this is pun intended by the developers?) as you land, you will preserve momentum and launch yourself to the bunny island. There is no way back, so you will have to reset once you’ve seen enough.

HARRY POTTER REFERENCE(Description put in spoilers due to the similarity to the star solution) Head to Goliath and grab both boxes and bring them to the beam blocker closest to the puzzle entrance. Place one box in the beam blocker's path to keep it as close to the wall as possible. Pick up the other box, jump on the first box, and place this box on top of the beam blocker to create a stair step. Jump onto the boxes, then onto the wall. Making sure to pick up the box behind you. Use the box to reach the highest wall and make your way to the end of the turret hallway. The goal is to jump over the wall at the end of the hall, so sprint jump and you should leap over the wall without any difficulties.

In this courtyard you will find 7 QR codes that can't be read in-game. If you were to use a QR scanner, they would read the following: Happy, happy, boom, boom, swamp, swamp, swamp. If you are not aware, this is a reference to the Harry Potter fanfiction, Methods of Rationality.

Tree Carving #1Head behind Air Delivery, where there is a fan that blows to one of the stars. You will see another floating island within jumping distance. Take a sprint jump and land on the island and look on the lone tree. You will see 9soVrvBVTX8 etched into tree... Hmmm... wonder what that could mean? How about this interesting music video? 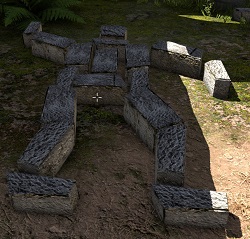 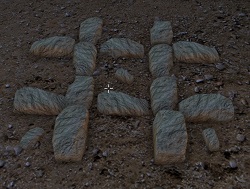 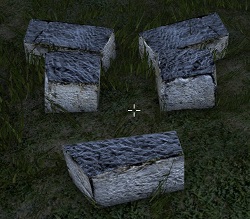 LEPRECHAUN (PART 2)This requires you to have previously assembled the entire leprechaun statue in Zone 1 and freed all prisoners in the game (except for Admin ). If you haven't yet, go do that now. Once you have freed all of the prisoners, head out to the hub world. Once you reach the center of the level, Irish music will start up and the freed prisoners will go into a hilarious River Dance routine!

TREE CARVING #2In the main hub, head to the Zone 2 island and take a left at the entrance. Looking over the edge, you should see a solitary floating island far below. Using a sprint jump, reach the small island. One of the trees has words etched into the bark, which may be hard to see as it is partially obscured by the branches. The words say Since Old Lost Age I Shine which is a reverse acronym of S-O-L-A-I-S, or Solais, one of the active community members.

Steins;Gate Reference (The Sequel)After you have freed Admin head into his prison and follow the path all the way to the dead end. You will see a small maze of pipes. Head to the small nook on the right side and look at the vertical pipe. Etched onto the side is Pipeline 1.049326 which is a reference to the Steins;Gate anime.

PRISONER SIDE ACTIVITIESThroughout the DLC you will come across certain cells that have some pretty interesting objects! Could be that the prisoners were just doing something to try and pass the many long cycles they have spent in their prison cell. Below are some of the more amusing/interesting ones.

WORLD 1: The Swapper- A bowling ball and bowling pins set up.

WORLD 1: Open Field- Rocks in the shape of a murder scene dead body.