How to Get Started in Settlement Survival

For this guide, we will be referring to a game on easy mode, as it is more of a getting to know the game rather than challenging yourself. Also, we will be playing on the default standard mode.

Before we get started, a quick overview of the necessary controls:

- W A S D- for moving the camera around

- All of the types of buildings on your hotbar at the bottom of the screen are automatically hotkeyed with '1' assigned to "Housing", '2' assigned to "Food", etc.

- The entire inventory for all gathered materials for your town can be found by pressing 'U', or by clicking the icon in the furthest top left. This is extremely useful for resource tracking and trading later on in the game.

If you ever get tired of Settlement Survival's in-game music, as sadly it does get extremely repetitive, after a couple hours of overall playtime, just pull up some Skyrim ambiance music to play in the background! It wonderfully fits the tone of the game and makes much it more immersing than silence,

I also prefer to play the game at Speed x10, as i find the game is much to slow at any of the other speeds.

Where To Place Your City 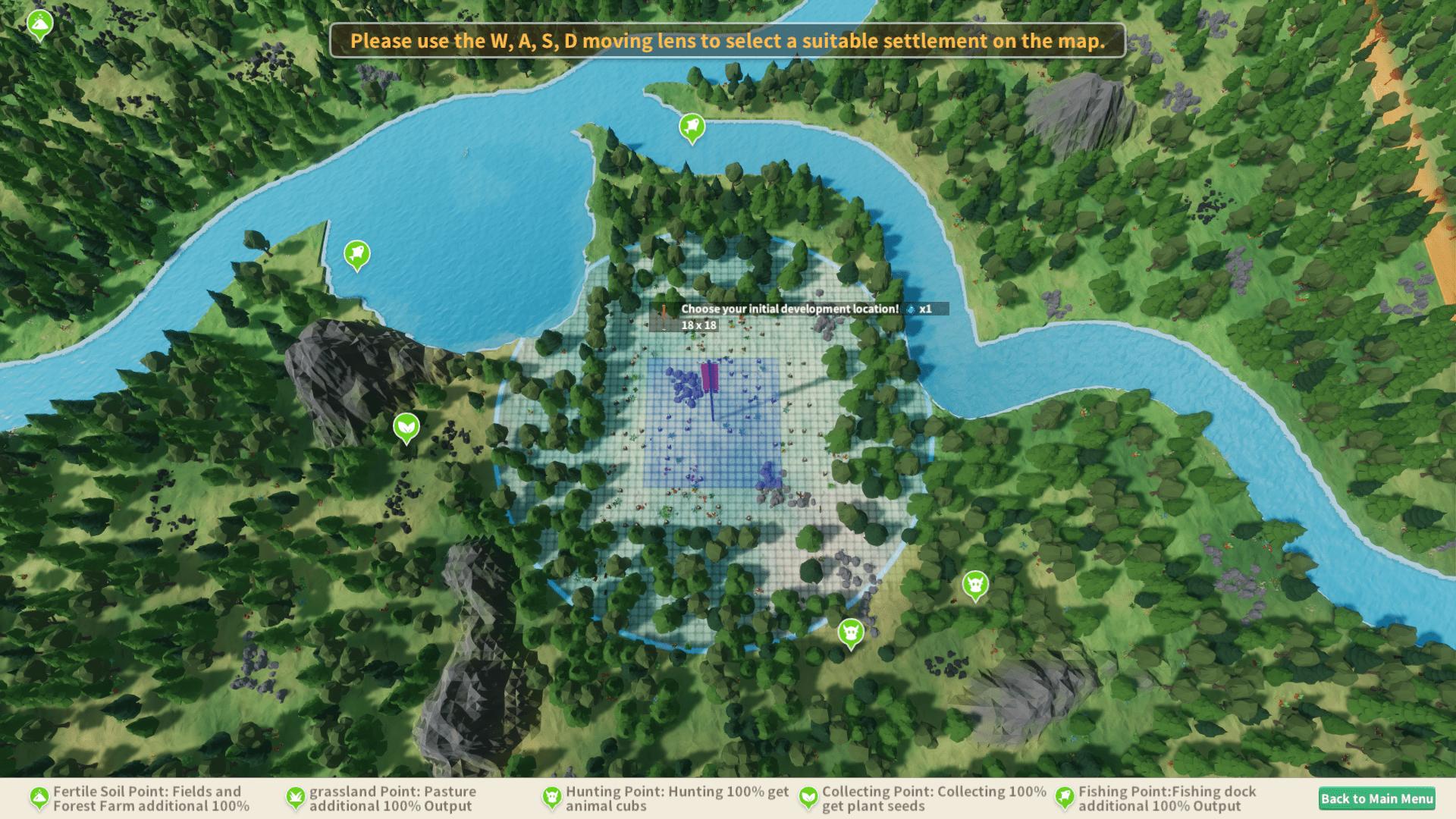 Fortunately, deciding where to place your city is rather intuitive. Typically look for an area that has water access with plenty of accessible resources around.

Ultimately, it is entirely up to you where to place your city, however It can prove to be difficult to grow in the late game if you are too spread out.

Keep your city somewhat close to the water for water access,

As you will need access to sand, clay, reeds, and the merchant ship (among other things) to develop.

Make sure all of the terrain around your starting city is accessible by workers ,

Even though the terrain might look traversable, make sure it is entirely flat or your citizens will be forced to walk entirely around the obstacle, which is not possible in some instances. In the cases of mountains, tunnels can be built to travel through them. Keep in mind the ability to terraform is only accessible to you after you invest 3 Development Points under 'Sand Mining', so you will be stuck with what landscape you have for a bit.

Try to settle around nearby resources,

This goes for deposits of iron (the little black rocks), stone, plants, timber, and even special resources indicated with a little green circle that hovers above the area.

Plan ahead your city's layout!,

Eventually you will need access to everything from mountains to big areas of open land in order to utilize all of the buildings that you eventually research. Plan ahead so that your workers don't have to travel so far without roads to access these buildings.

The more spread out your city and its workers are, the more susceptible they are to become cold, injured, and less efficient, not to mention slower building times!

Try to plan your city around roads, as roads help your workers move quicker, which ultimately helps tremendously with efficiency. 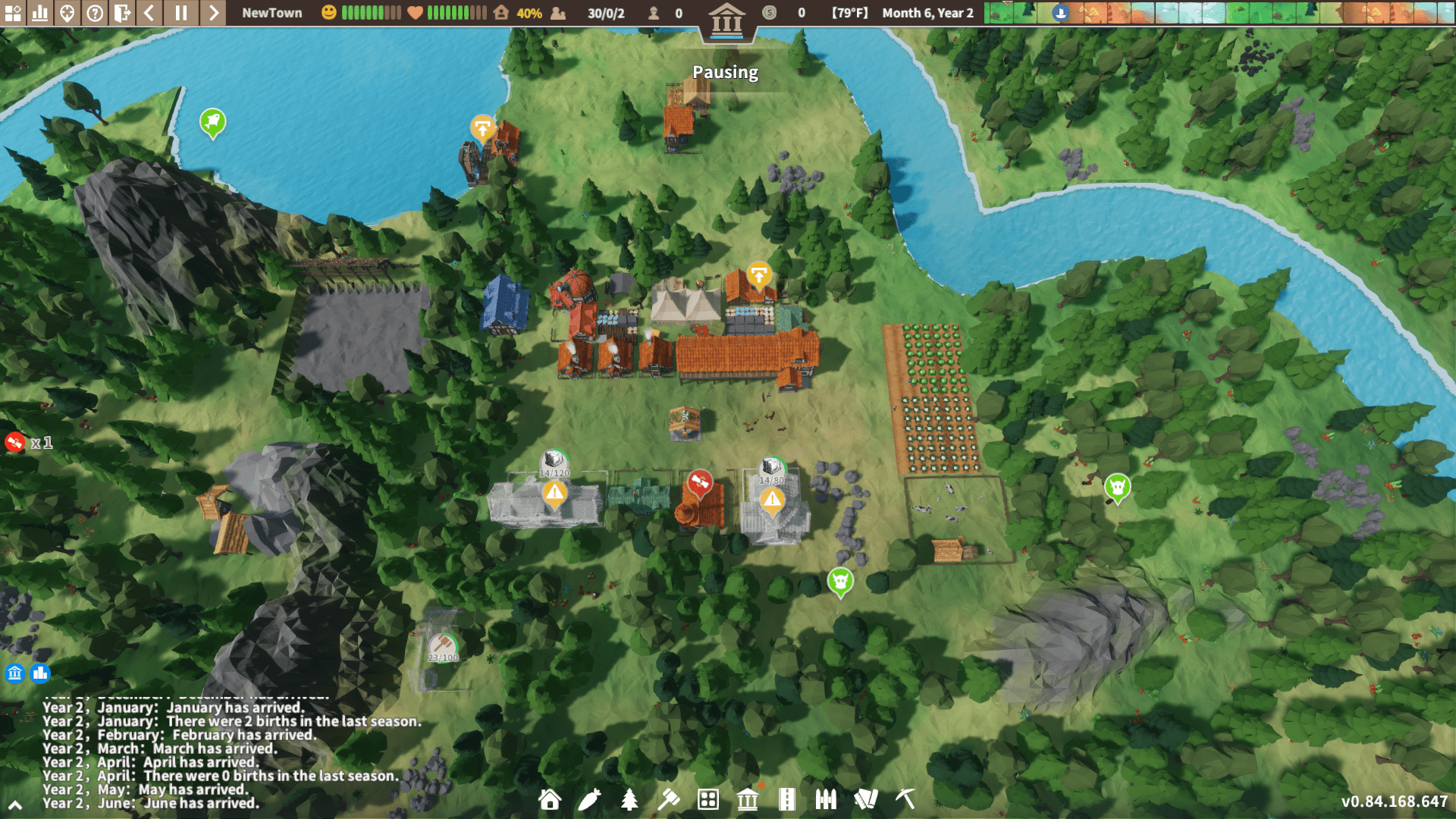 As soon as you settle your city, a bunch of problems rear its ugly head:

You start off the game with 30 citizens on this mode and all of them will be looking for a house to live in. Build two houses and a boarding house at the start to quickly fulfill everyone's housing needs and turn your attention elsewhere. Keep in mind however that boarding houses are not a viable long term solution, as it makes the citizens less likely to have children. Eventually you will work towards a network of singular houses to ensure that the desire to have children is high.

Quickly tapping 'U' will show you your water supply and it's not much. Build a big well immediately and it should supply your entire city for a couple years in-game.

Build two fields close by to your village in an area that is able to expand to meet your settlement's food needs. What seeds you can plant are ultimately down to luck with what you spawned with. Focus on vegetables at the start, it doesn't matter which ones.If you spawned with any seeds such as agave, then expand to have a field whenever you build a distillery. You can also build a pasture if you wish, as you will need some type of wool to make clothes.

At the start of the game you are not able to replenish your resources until you have built the corresponding buildings. This issue will be broken up into multiple parts:

Lumber - Build a "Logging Camp" (Hotkey 3) in an area removed from where your city will develop to, but not too far for your workers to carry back lumber. Find a happy medium that allows for your Logging Camp to have its plant and harvest radius be largely undisturbed by your settlement's development for maximum efficiency.

Misc. Resources - Build a 'Gathering Station' (Hotkey 3) as well as a 'Hunting Cabin' to ensure that various plant needs are being worked on, as well as gathering meat for food and wool for clothing. Build a Gathering Station in an undeveloped patch of land near you settlement for max efficiency. I find that putting it next to the Logging Camp works well.

Tools & Clothing - Build a 'Blacksmith' (Hotkey 4) as well as a 'Tailor's Workshop' to make sure that you do not fall behind on tools and clothing. A lack of clothing makes your citizens more susceptible to the environment, and be less happy and efficient. A lack of tools mainly damages your worker's efficiency. At the start of the game MAKE SURE TO SET PRODUCTION LIMITS on how much clothing and tools you wish to make, as if you leave the default value unchanged, it will deplete your resources for extra tools that you do not need. Set a production limit to around 40, plenty to supply your settlement for the time being (you can always come back later and change this). Also, you do not need permanent workers in these both these shops. Alternate workers until your limit has been reached and then assign them to whatever job needs more citizens the most.

Fuel - Ensure that you have researched the 'Sawmill' as the Sawmill can convert timber from your Logging Camp into domestic fuel. 'Water Sawmills' are more efficient so if possible look to build one of those instead. Without this fuel, your citizens will grow to be cold and can even eventually die. Also remember to set production limits for this as well, as you do not want to use up all of your timber for fuel.

Warehouse Space - You do not start off with a lot of room for inventory, and after harvesting resources for a little bit you will soon reach the maximum capacity for your default storage. Build more open warehouses or simply utilize a development point in Logistics to build an actual 'Warehouse' that is much more efficient in space taken up per storage.

By now you will run into a lack of resources that is keeping you from building. While you can simply search around for iron(little black rocks) or stone and harvest resources utilizing the pickaxe on the hotbar, this is not sustainable. As such you will need to invest development points into 'mining' and 'stonepit' to be able to build a 'Quarry" for stone, and a 'Mine Pit' for iron ore. Build both these away from your city as they takes up a lot of space.

Development points are what allows you to progress in the game and there for are crucial in developing a functioning city. Build a 'School' (Hotkey 6) and invest a development point in a 'Research Institute' after you have a steady supply of stone and iron. Both building contribute massively to earning more points and are extremely worthwhile to build. Consider investing down its development path for research buffs, but keep in mind they will require resources and buildings that you do not have access too yet.

As your citizens are currently savages with nothing to do besides work, they will become unhappy and unhealthy quickly. To combat this, build a 'Church' and a 'Clinic' to ensure that your citizens are as happy and healthy as they can be in the early game. The more happy and healthy they are, the lower the stress they will have, increasing the fertility rate. Eventually you will run out of herbs for the Clinic however. Work on investing four points down the 'apiary' column of the Agriculture development section to obtain the 'Nursery' and 'Herb Knowledge'. These two things work hand in hand, as now whenever herbs are collected, you have the chance to gather seeds which you can then plant in a nursery and create a steady herb supply. In the 'Quality of Life' development section, work towards spending three development points down towards getting a 'Theater'. Keep in mind however that building a theater requires Bricks, Laid Stone, and Glass. Glass and Bricks are smelted by unlocking the 'Calcinating Kiln' in the mining development tree, and Laid Stone is unlockable in the construction tree. Happiness can also be improved in the way of spirits (name for plain alcohol in the game) if you have the spirits. A distillery can change your agave plants into spirits which then increases happiness, so if you have the room for an extra field, throw in a field of agave!

While starting off the game with 30 settlers is great and all, it could be a lot better. After a couple years your initial generation of settlers will begin to die off and your city will be in dire need of citizens in order to continue working and expanding. After building a 'Town Hall', you will be able to accept immigrants to live in your settlement, usually 10-11 at a time. This yearly influx of immigrants helps to combat your dying original population and are crucial for growth. To increase fertility rates to make sure that as many children are being born as possible, ensure that citizens have a dedicated house, are happy, and healthy. Working towards buildings in the 'Quality of Life' development tree is crucial in the long term.

By now your settlement should be looking somewhat like this:

By now your settlement should be on its way towards self sustainability and looking like a real settlement! Don't forget to have fun and experiment with how you want your city to function and expand, as there are a ton of creative ways to do so!

In the future, if desired enough I might add a guide for money as well every material in the game, as the crisscross between gathering the resource, sometimes developing the resource, and then constructing the building can be quite difficult to track and optimize.

Anyway, I hope that this little guide helped, as it can be a little difficult to track and understand what is happening for new players! Feel free to comment with any questions or suggestions!