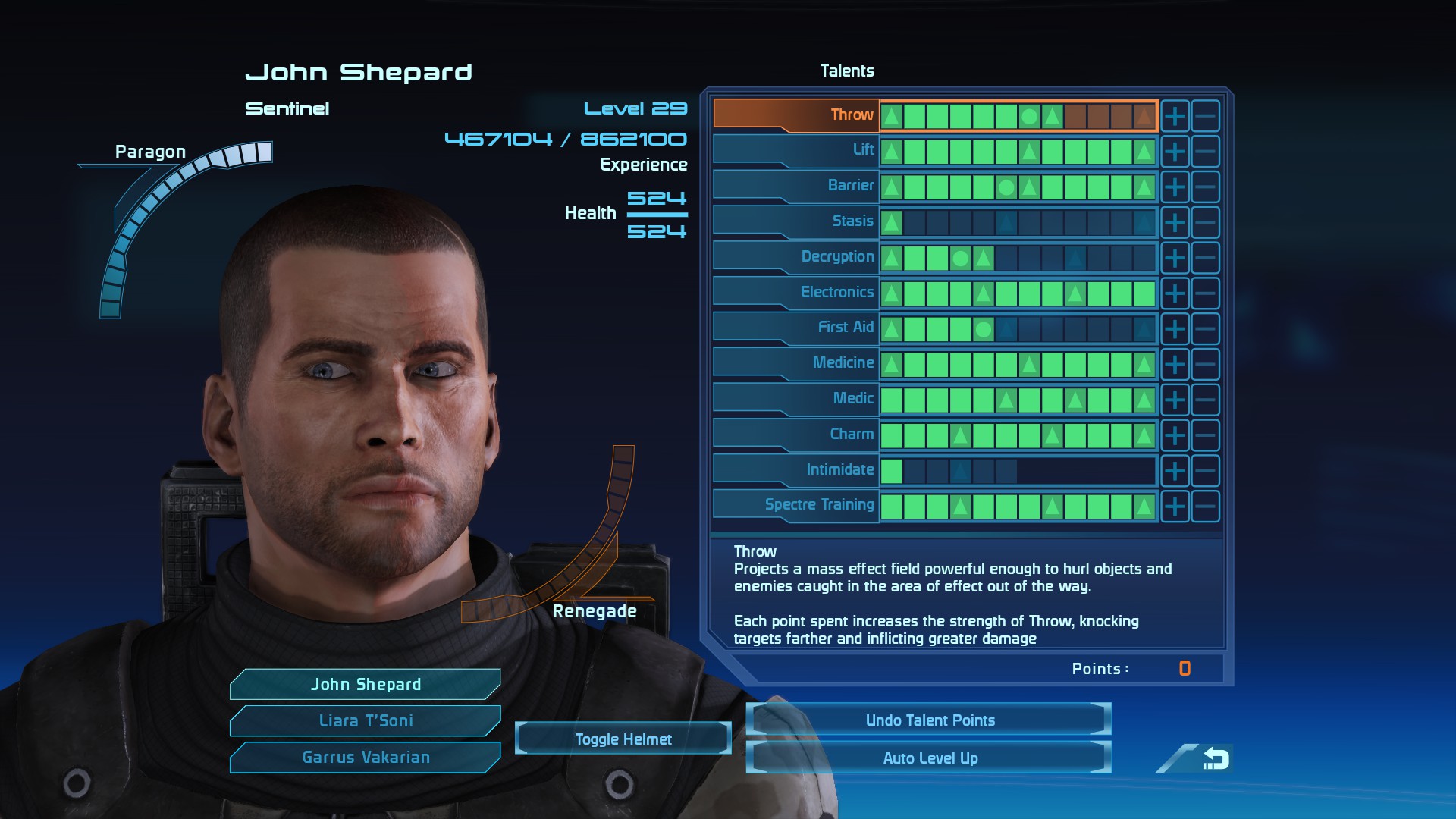 This Sheppard Build is designed to be the ultimate support character, it focuses on Medical tech to keep the squad alive and defensive talents to increase Sheppard’s survivability. Be sure to put an initial point into Barrier to increase your defense before putting points into First Aid to unlock Medicine. Medicine not only gives you a powerful control/damage ability against organic enemies in Neural shock but reduces the cooldown of your First Aid talent. Another early priority is to reach level 6 in the Sentinel Talent to unlock Marksman, the sole combat ability for a Sentinel, which also lowers the cooldown of your biotic and tech talents. Of course, take Charm/Intimidate as you unlock ranks with morality points, I do recommend Paragon over Renegade as Paragon points give a bonus to hit points as well as a reduction in First Aid and power cooldown. Do not put any more talent points into First Aid once you have unlocked Medicine, as your heals will be sufficient with the First Aid Specialization from the Medic class.

Once you have Medicine and Sentinel maxed out, switch priorities to defensive talents. Barrier is the only defensive talent which allows Sheppard to boost his shields when he is under fire so that should be the first defensive talent you take. When you have enough talents in Barrier, take a single point in Stasis, to be used in certain very difficult fights and in emergencies. Once Barrier is maxed, take enough Decryption points to get Advanced Sabotage before maxing out Electronics for a substantial bonus to shields. Defense can be further increased by maxing Spectre Training which increases health, weapon damage, and power damage and duration.

Once Level 20, you should have all the defensive and medical talents you need. Round out your build by putting the remaining points into Throw and Lift. You have enough points to get Advanced Throw and Master Lift by Level 29, which is reachable in one playthrough. Master Lift is particularly helpful in the final encounter of the game, so we get it just in time. 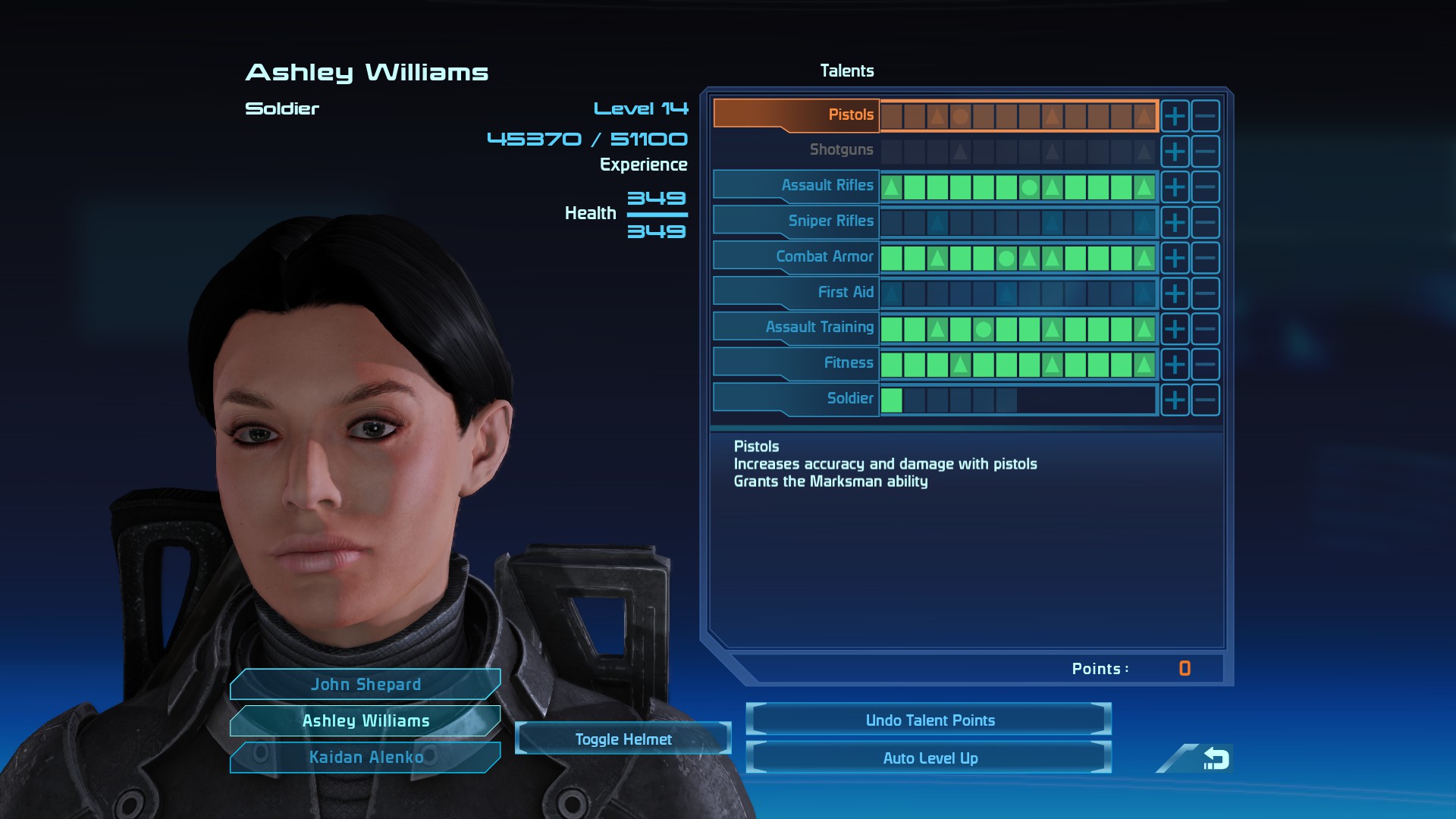 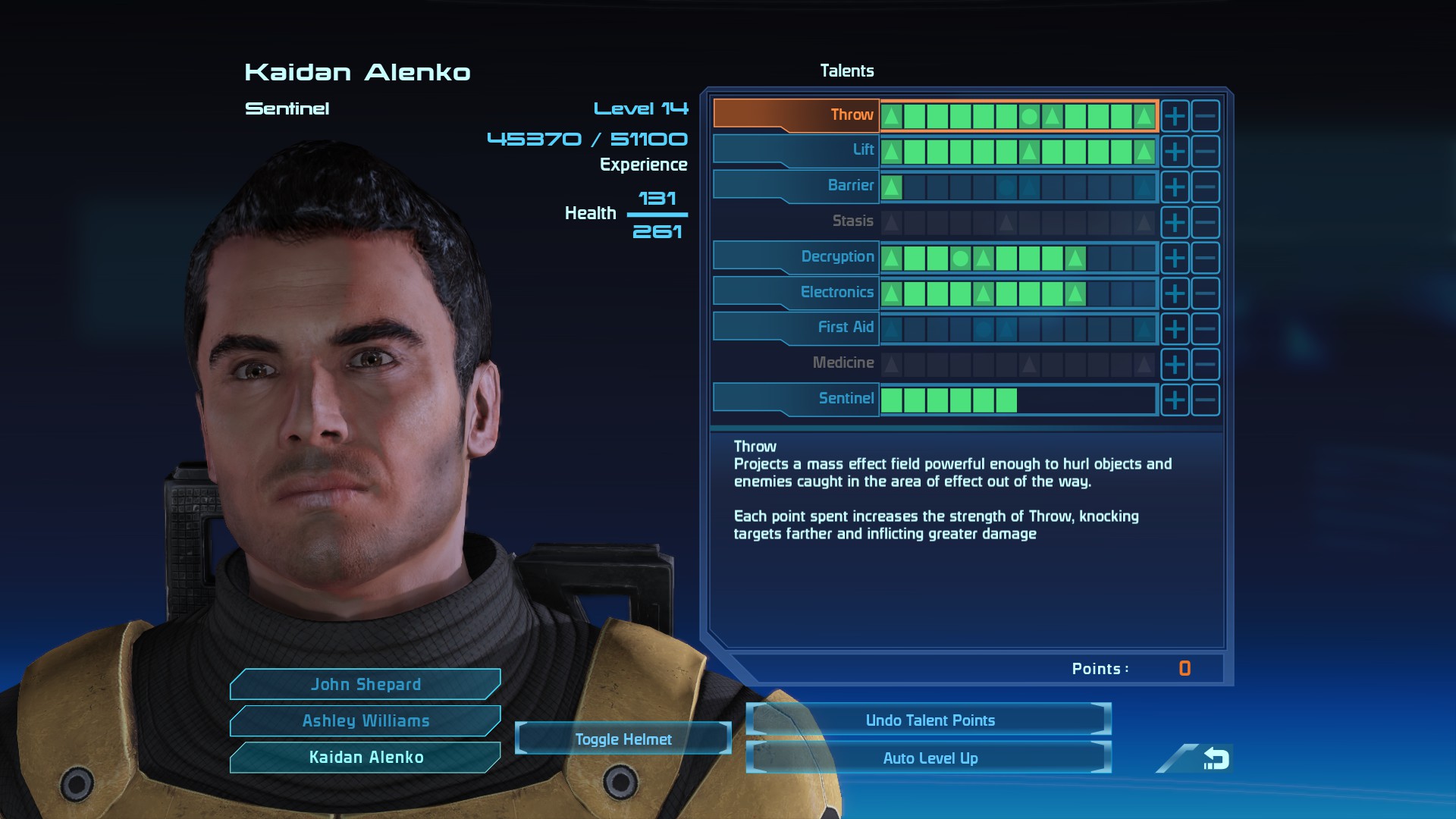 If you're playing Mass Effect Legendary Edition for the first time, you will not have any achievements when you begin the game. There are powerful bonuses to some of these achievements which are worth considering as you plan your playthrough. Essentially, each squadmate provides a bonus once you have completed 5 missions with that character. Therefore, I recommend using each squadmate at different points in the game, and switching out to a new squad once you receive those bonuses. Since Ashley and Kaiden are your first party members, they are the logical choice for your first squad. Ashley provides a 10% reduction to damage taken while Kaiden provides a 10% reduction in the cooldown of Lift and Throw.

Kaiden serves as your early game crowd controller and also provides the necessary tech talents to open locked doors and containers. While Sheppard focuses on Barrier/Stasis and First Aid/Medicine, Kaiden filles the gap with Throw/Lift and Decryption/Electronics.

Use this squad for the early game, all the missions/assignments in the first citadel visit, all the easiest assignments, and the Find Liara T'Soni mission. 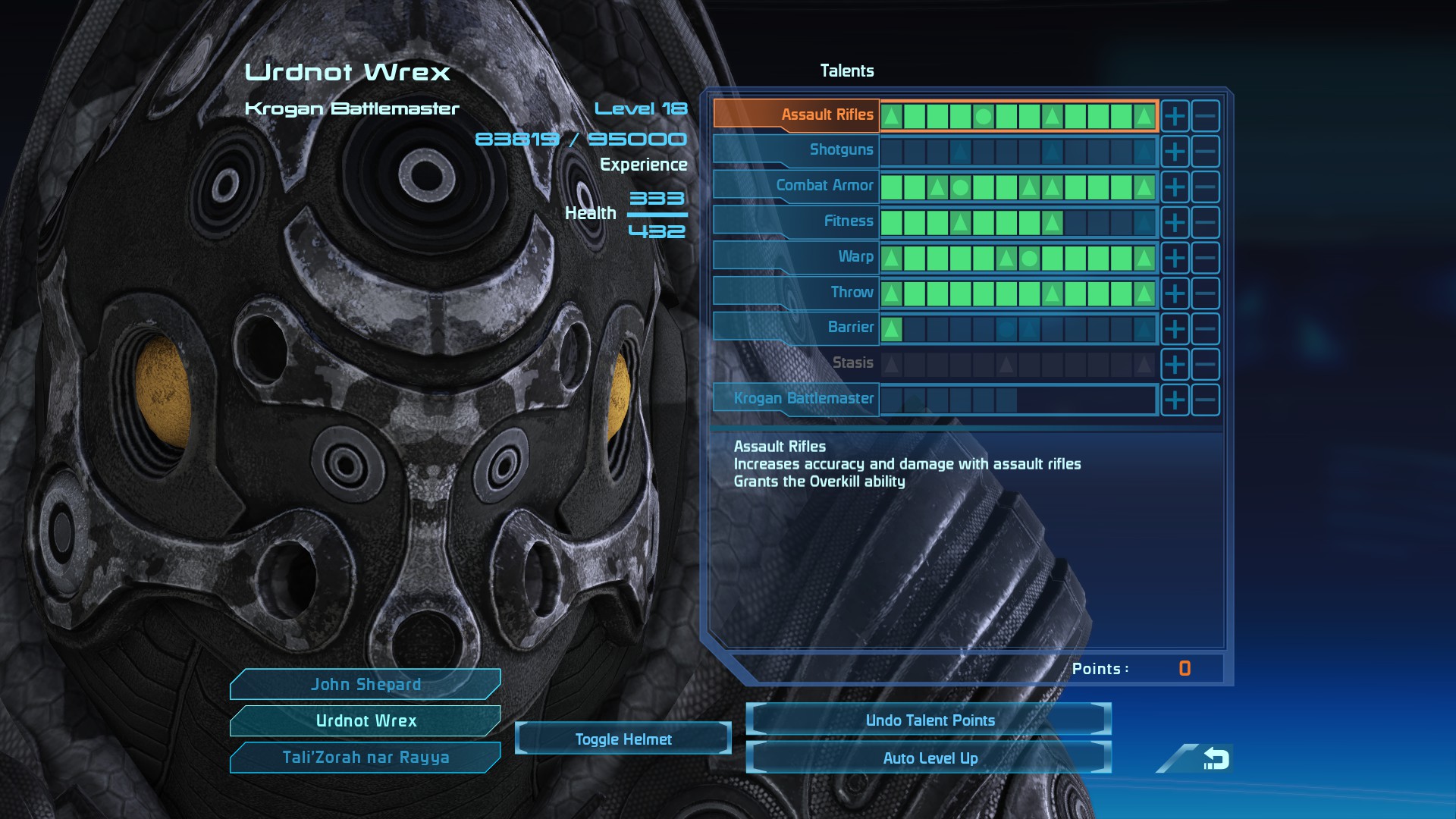 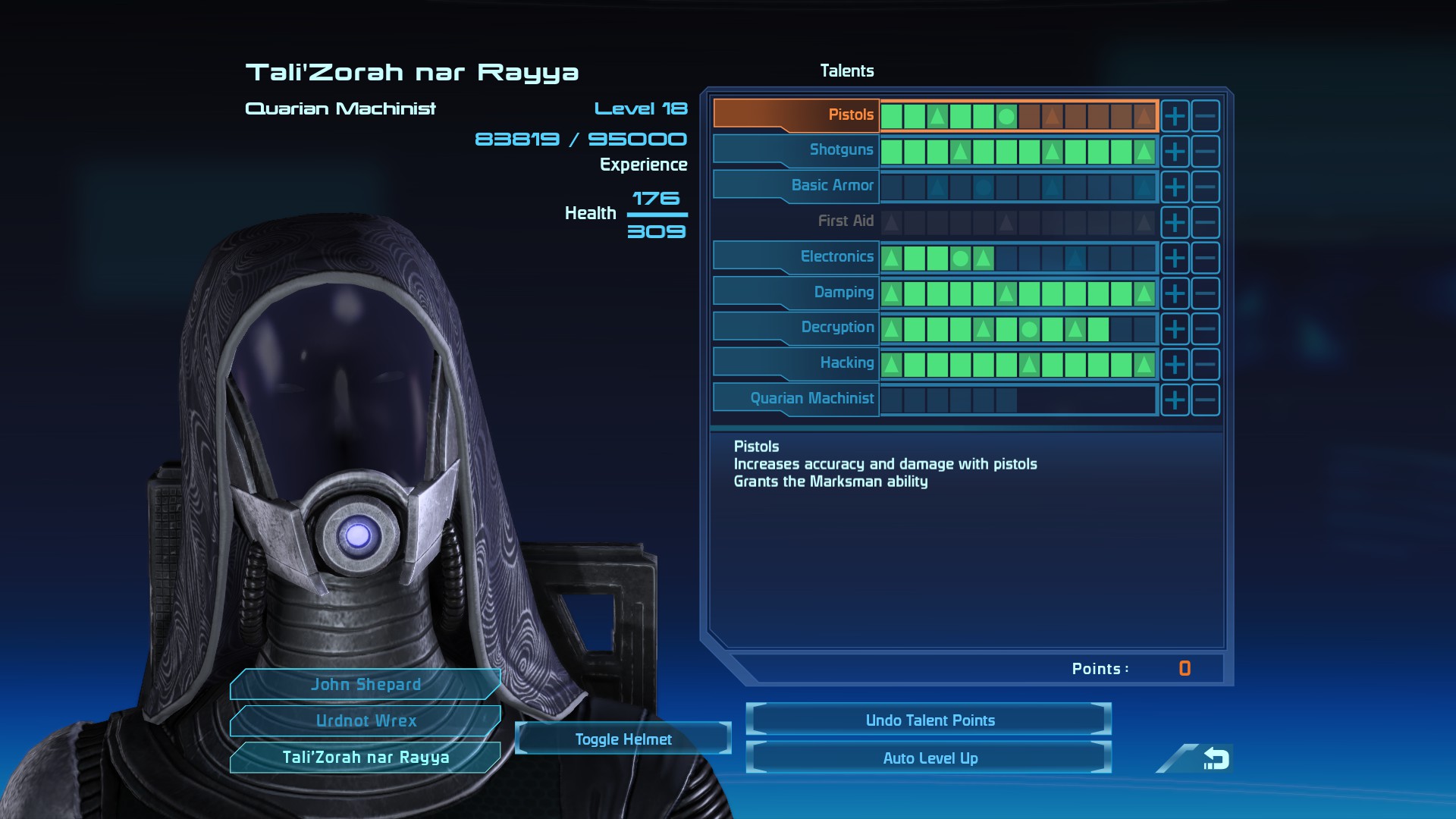 Once reaching Level 15, having two sentinels on the team starts to cause Sheppard and Kaiden to overlap on talents so switch to Wrex and Tali. Wrex works as your primary damage dealer with some added crowd control, while Tali is our primary form of crowd control. This particular squad is well suited to fight against Synthetic enemies due to the powerful tech abilities of Tali, including AI Hacking, which allows you to charm enemy synthetics for a short time. Using these companions for 5 missions will grant HP regeneration and reduce the recharge time of Sheppard’s Sabotage skill. I recommend using this squad while doing the Rouge VI mission, and the first half of Noveria, you should have done 5 missions with Wrex and Tali once you reactivate Mira.

Have Wrex max out his Assault Rifle before switching focus to his biotic abilities Throw and Wrap, round out his build with defensive talents once you have all the offensive talents you need.

Tali gets really strong midgame as all her tech abilities synergize. Get Master Sabotage, AI Hacking and Damping first so Tali has strong crowd control abilities against Synthetic enemies. Round out her build with Shotguns once you have all the tech abilities you need. 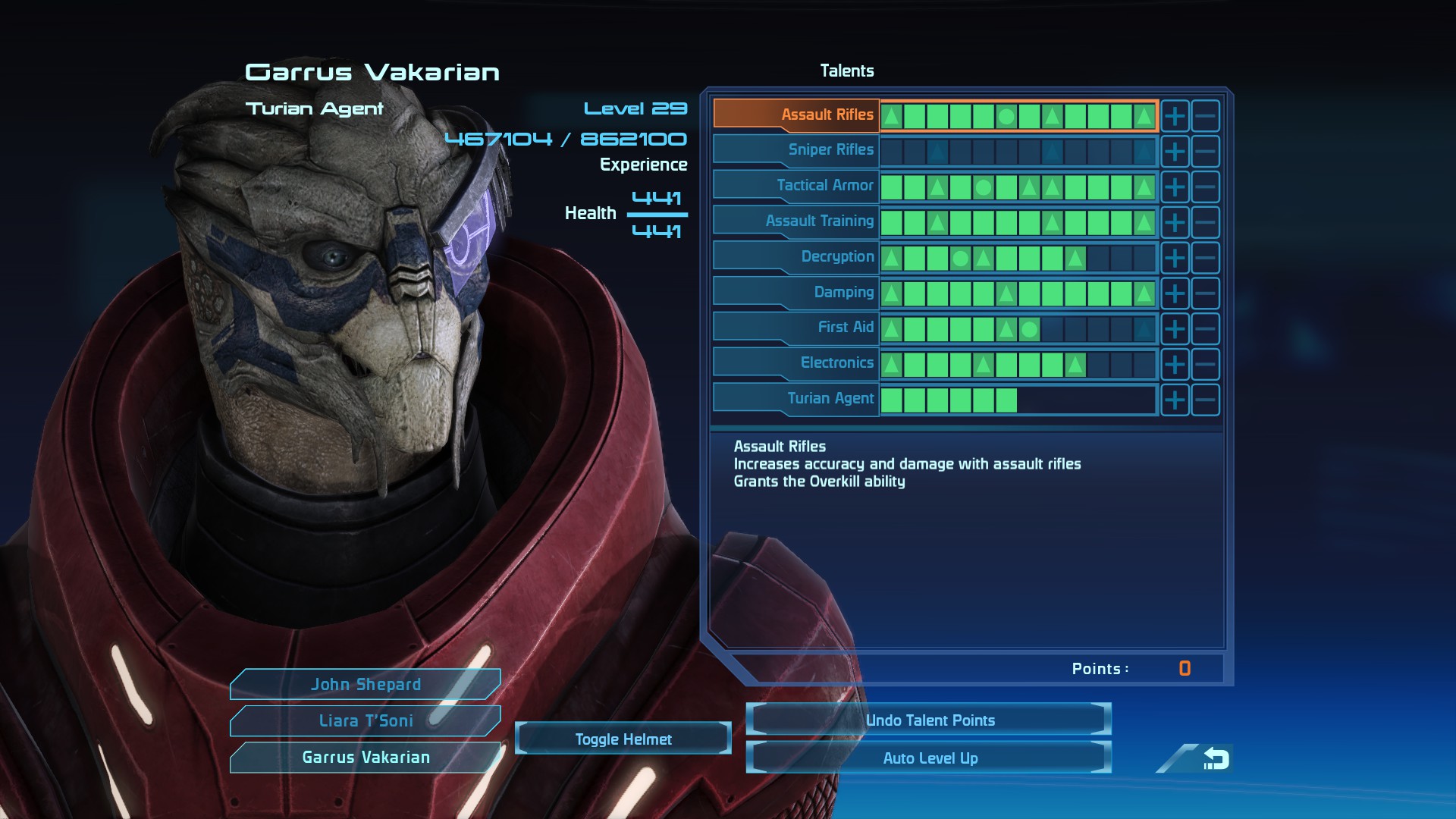 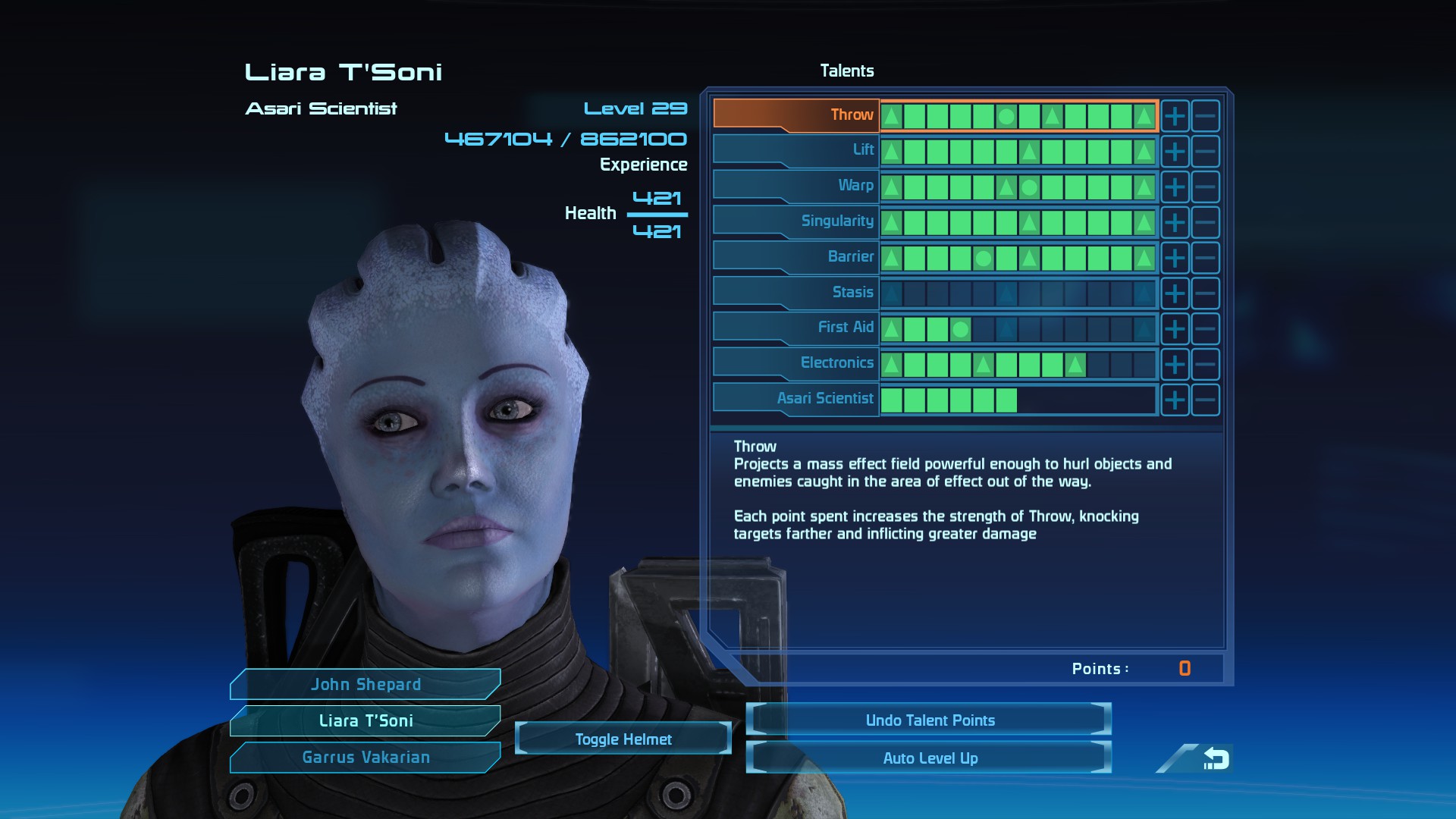 This is the ideal squad for Sheppard, and one that is well suited to all of the most challenging encounters of the game.

Garrus is our primary damage dealer, and has the highest weapon damage out of any squadmate in the game, while also having the added benefit of powerful tech talents in Sabotage, Overload and Damping. Max sure to have his Deception skill to 9 so you can open any locks. Garrus's achievement provides a 10% reduction in the cooldown of Sheppards Overload ability.

Liara's biotics provides our primary method of crowd control and is an enormous help when fighting Rachni, Thorian Creepers, Husks and Krogan. Max our all of her offensive biotic talents (Throw, Lift, Warp and Singularity) first, before rounded out the build with the defensive bonuses from Barrier and Electronics.

Citadel - do all assignments and missions possible, start "The Fan"

(Note: These are the easiest assignments which can be done with little combat, or with most combat in the Mako)

Return to Citadel - do all assignments possible, progress "The Fan"

Colony of the Dead - Maroon Sea

Bring down the Sky - Note: Do this late, as the reward scales with level