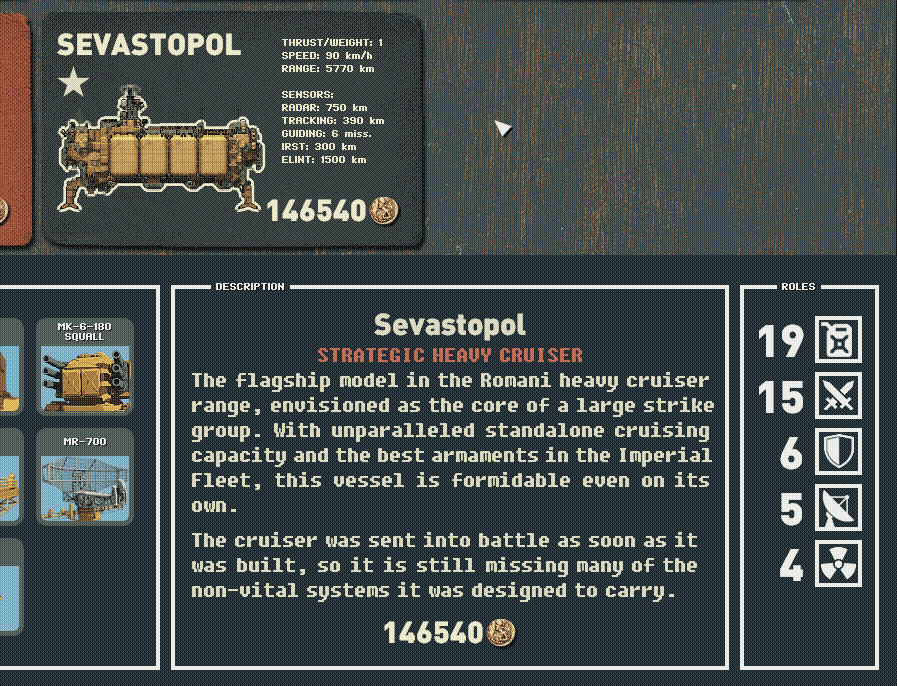 Right now there are 75 stock ship designs in game, and players can create an additional ships in Shipworks editor. Every of those, even player-created ships, have a automatically assigned class (e.g. main campaign flagship, Sevastopol, have "strategic heavy cruiser" class). This classes shown at the New Game screen (where you decide how many Lightnings and Skylarks you want to bring with you), and at docks in cities in reduced form (e.g. Sevastopol is "strat HV cruiser").

Ship class mentioned in red text below the ship name.

The class consists of two parts - in the Sevastopol's case, first part is "strategic" - which explains its general purpose, and the second part is "heavy cruiser", which explains how heavy it is.

For the second part ("heavy cruiser" in the Sevastopol's case), game just looks at ship mass and assign appropriate class as described below:

There is one exception among stock ship designs: Kormoran is designated as a "light cruiser", although it has a mass corresponding to "cruiser" (10,551 t). Nevertheless, if you load Kormoran into the editor and save it under any other name, its class will change to "cruiser" as it should be.

For the first part ("strategic" in the Sevastopol's case), game have 5 possible classes, and assigned class also defines color of the ship card (at the New Game screen, where a list of available ships in the cards of different colors). These classes and rules by which a ship is assigned to one of them is described below:

If the ship has at least 1 missile silo with Kh-15, A-100 or R-3 (or any modification of those), then ship is considered "Strategic" (black colored card), no matter what else installed on it.

If the ship isn't "Strategic", and has at least 1 aircraft, then ship is considered "Carrier" (blue colored card).

If the ship isn't "Strategic" or "Carrier", and its speed is above 450 km/h - then ship is considered "Interceptor" (yellow colored card).

If the ship isn't "Strategic", "Carrier" or "Interceptor", and its range exceeds 2000 km, then ship is considered "Auxiliary" (green colored card). 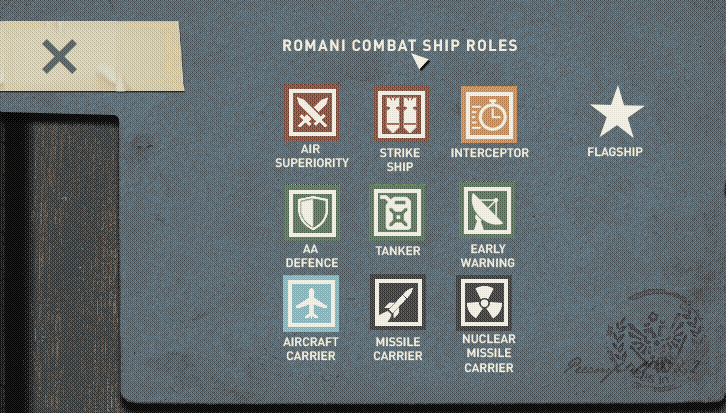 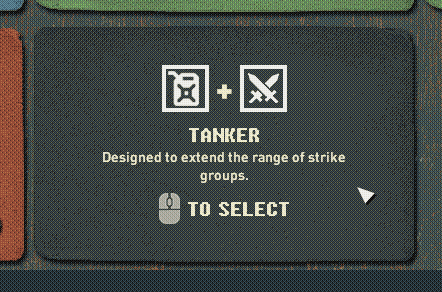 And yes, "role values" were mentioned above. Ship roles are 9 ship attributes shown as icons with corresponding values, which tends to show how well ship suited for particular task. The role values can be found at New Game screen, when hovering cursor over a ship card. Also, when doing this, ship's picture is replaced with role with maximum value, with short description of what tasks can perform ship with that given role (e.g. Sevastopol described as a "tanker"). Some ships may have two (or more) roles with same value (e.g. Fenek have 2 in "AA Defence" and 2 in "Early warning"). In this case, the game displays the role of them that comes first in this order: air superiority > strike ship > interceptor > AA defence > tanker > early warning > aircraft carrier > missile carrier > nuclear missile carrier.

Role values is determined by ship attributes and installed equipment, as shown below:

Air superiority. The value increases with each installed gun or anti-ship missile:

Strike ship. The value inreases with each installed bomb:

Interceptor. The value is determined by ship maximum speed:

AA defence. The value increases with each installed AA gun or anti-missile:

Tanker. The value is determined by ship fuel capacity:

Early warning. The value is determined by radar/IR capabilities:

Aircraft carrier. The value is determined by amount of aircrafts:

Missile carrier. The value is determined by amount of non-nuclear missiles loaded in missile silos:

Role values is rounded to the nearest integer: .4 rounded down to 0 and .5 rounded up to 1.

Also here is my spreadsheet with all 75 stock ship designs and their attributes and assigned roles, sorted by price (SPOILER WARNING: spreadsheet contains all ships, included story-related):

Note0: all data above was gathered at 1.13 patch from experiments, guessing and checking this guesses in Shipworks editor or New Game screen. So all above potentially can contain mistakes.

Note1: If you found an language error, please tell me about it. English isn't my primary language :C

Note2: original article was posted on r/highfleet and uploaded at Steam with author request.