Home Ghost Watchers How to be giga chad in ghosts

How to be giga chad in ghosts

What About Is This Game!

Ghost Watchers is totally about haunting evil spirits. The process of haut consists of 3 stages:

Determine the special properties of the ghost.

Before You Start The Game!

I recommend you to start from the normal difficulty. You may see hints on this difficulty.

On the hard difficulty:

You lose your tools when the ghost takes you away

On the insane difficulty:

The ghost can break electric tools in your hands

Ghost can attack hunters outside the house

Many items have got only one charge

Types of protective itemsThe ones that need to be thrown:

The ones that need to be put on the floor:

The ones you need to hold in your hands:

To collect evidence and read hints, use <TAB>. You will see a pad, in the left part of which you need to indicate the collected evidence. In the right part you need to select the correct properties of the ghost. The selected evidence from the left part will help to select the propreties in the right part. There are two buttons at the bottom of the pad:

Encyclopedia. This section contains descriptions of all the ghosts and tools.

Weakening the ghost. This section provides a list of actions to weaken the ghost. In the right part there is a hint on the action of the tools on the selected type of ghost.

Each correct action to weaken the ghost will be accompanied by the sound of a gong and a hint (at an normal difficulty level). If you perform actions in the correct sequence, but do not see these effects – most likely, you made a mistake with the properties of the ghost. Check it again!

There are also some additional quests that gives you coins. Coins can be immediately spent on the purchase of tools. Purchased tools are not transferred to the next session. 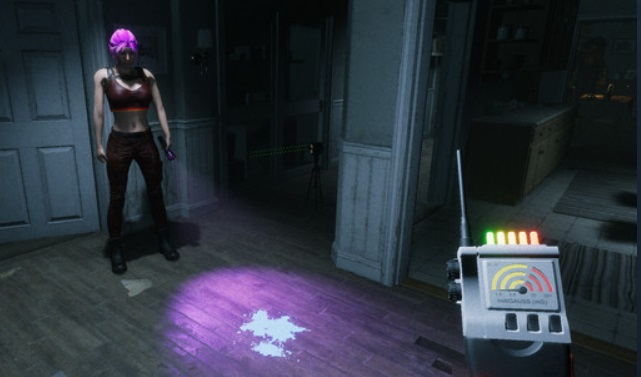 So here is one thing the ghost wanders room to room, you will eventually bump into the ghost if you just hang around the entrance of the locations.

When the ghost is near you it activates your tools, EMF, Thermometer, etc.

To make money in the Ghost Watchers, you have to do the objectives, just guessing what the ghost is wont earn you money. Simple

Objects used for this are as follows;

EMF: Walk around and wait for it to show signs of activity, best used in a room where the ghost was just spotted, or a room that someone was just dragged to.

Ouija Board: Will either move or not move at all depending on ghost type. I usually set it up in entryway and it eventually moves.

Particle Sensor: Will charge eventually while being held in hand. If it turns off, keep wandering to find a location where it charges up again.

Radio: Will work in hand or sometimes on ground. The ghost does not talk but will cry or groan, sometimes it will do this without needing to say anything.

UV Light: Point it at the ground, no correlation found as to where the evidence will exist. Wandering around with the UV usually does the trick. Note: Big footprints = Baby, and sometimes the UV won’t find anything at all and that is evidence itself.

Voodoo Doll: I usually throw it right beside the oujia board and stare at it. Eventually it moves or I eventually determine that it will not move.

Once you have identified the ghost, the tablet will show you the steps to weaken and eventually capture the ghost. These tasks must be done in order, you will get a green popup when completed. If an object you are not supposed to use is used in between steps, you will not need to restart, just continue on as nothing happened. So long as the steps are eventually completed sequentially, you will be fine.

Objects used for this are as follows;

Holy Salt: Throw at the ghost when ghost is doing the killing animation to you.

Fire Salt: Throw at the ghost when ghost is doing the killing animation to you.

Salt: Throw at the ghost when ghost is doing the killing animation to you.

Silver Bomb: Throw at the ghost when ghost is doing the killing animation to you.

Golden Bomb: Throw at the ghost when ghost is doing the killing animation to you.

Holy Water: Throw at the ghost when ghost is doing the killing animation to you.

Holy Fire: Throw at the ghost when ghost is doing the killing animation to you.

Cross: Hold in hand throughout the killing animation, it will work when the animation is over, you will not die.

Christ: Hold in hand throughout the killing animation, it will work when the animation is over, you will not die.

Incense: Hold in hand throughout the killing animation, it will work when the animation is over, you will not die.

Plasma Absorber: Drop on the floor and stand near it, ghost will not harm you unless the object is used and not recharged. It is very clear when the absorber activates. There is a bar on the object indicating its recharge.

Withering Lights: Drop on the floor and stand near it, ghost will not harm you unless the object is used and not recharged. It is very clear when the light activates. There is a bar on the object indicating its recharge.

This will be the last step and highlighted in green. After you complete the last weakening step, the ghost should be visible to you and wandering around the map. Run up to the ghost and throw the ghost pokeball at it. Then pick up the ball and the game should end.

GOOD JOB NOW YOU ARE A GIGA CHAD!