Please keep in mind that this is meme, 100% no skill, L2 spam build. Nothing more and nothing less.

Which doesn't change the fact, that it is incredibly, inRAMorously lethal to anyone that is unlucky enough for being picked as target of spammy ram-raming.

Abusing Lightning Ram ash of war is straight forward simple ram. Everyone could made it and I am not the first one for sure and I am not trying to act like one ( builds "inventors" in game with 500k current player, heh...)

Other thing is that very few people imo, realize how effective it could be.

I have not made this build with intention of creation counter meta troll.

Nevertheless, as it literally melts all these "meta" pro builds, it is kind of anti-meta troll, do I want it or not.

That doesn't matter tho, as Rams don't care about meta and only thing they care about is ramming rammy-o and they will ram everything in every possible meta.

I made some test and check how this can be even more rammy that just a Ram.

The Great Spam Ram enlightened me and showed the way to transform into Spamramramanator. 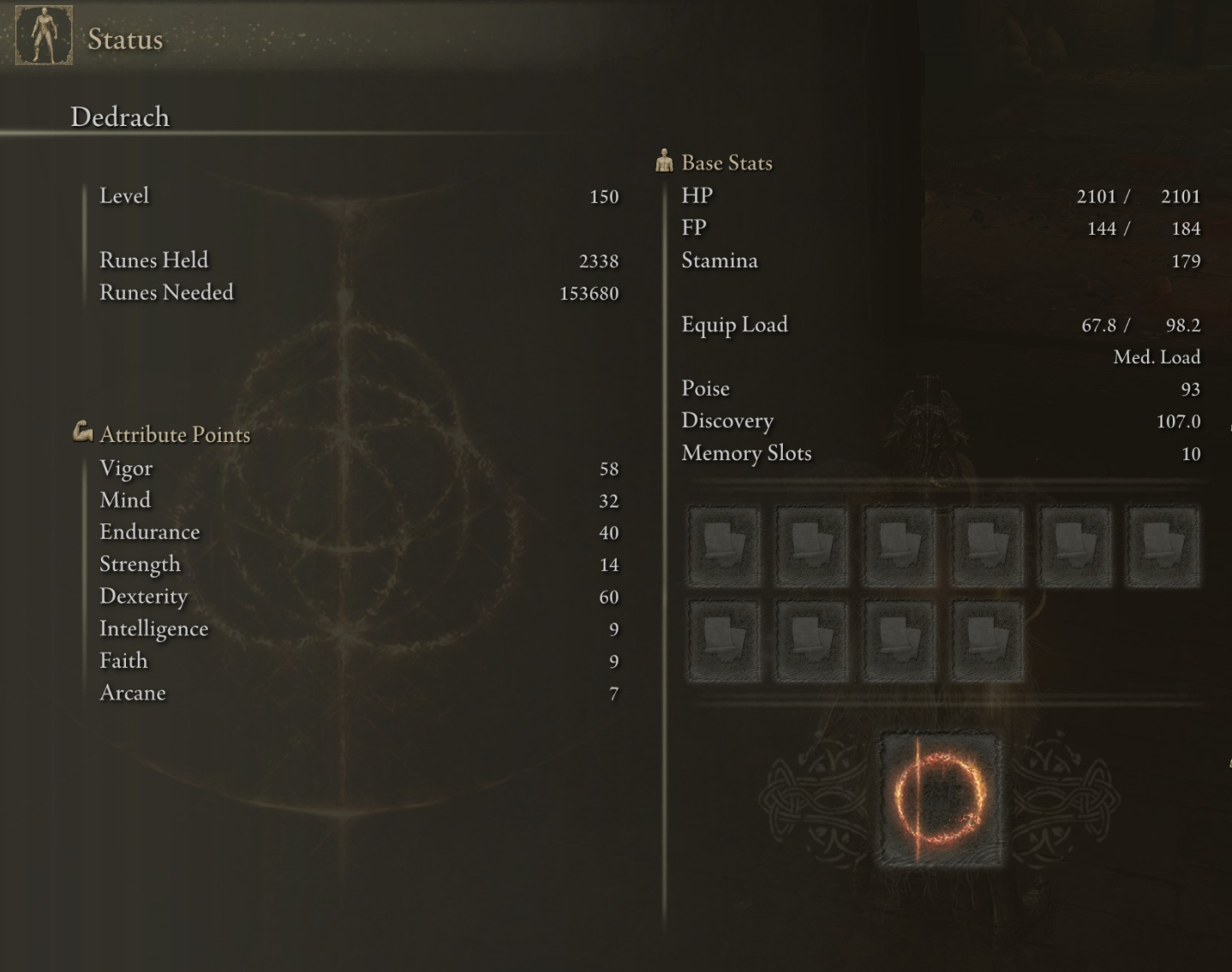 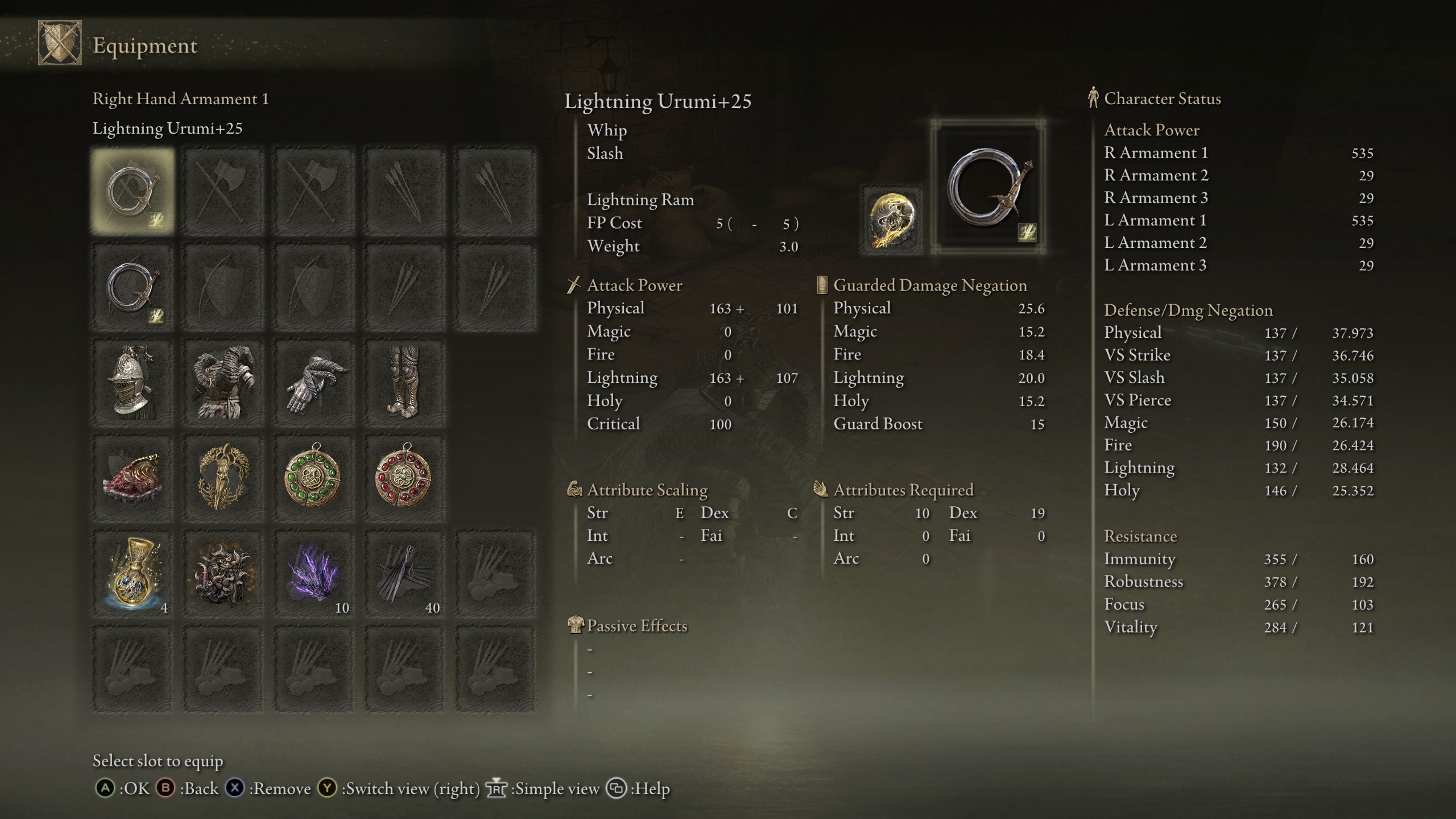 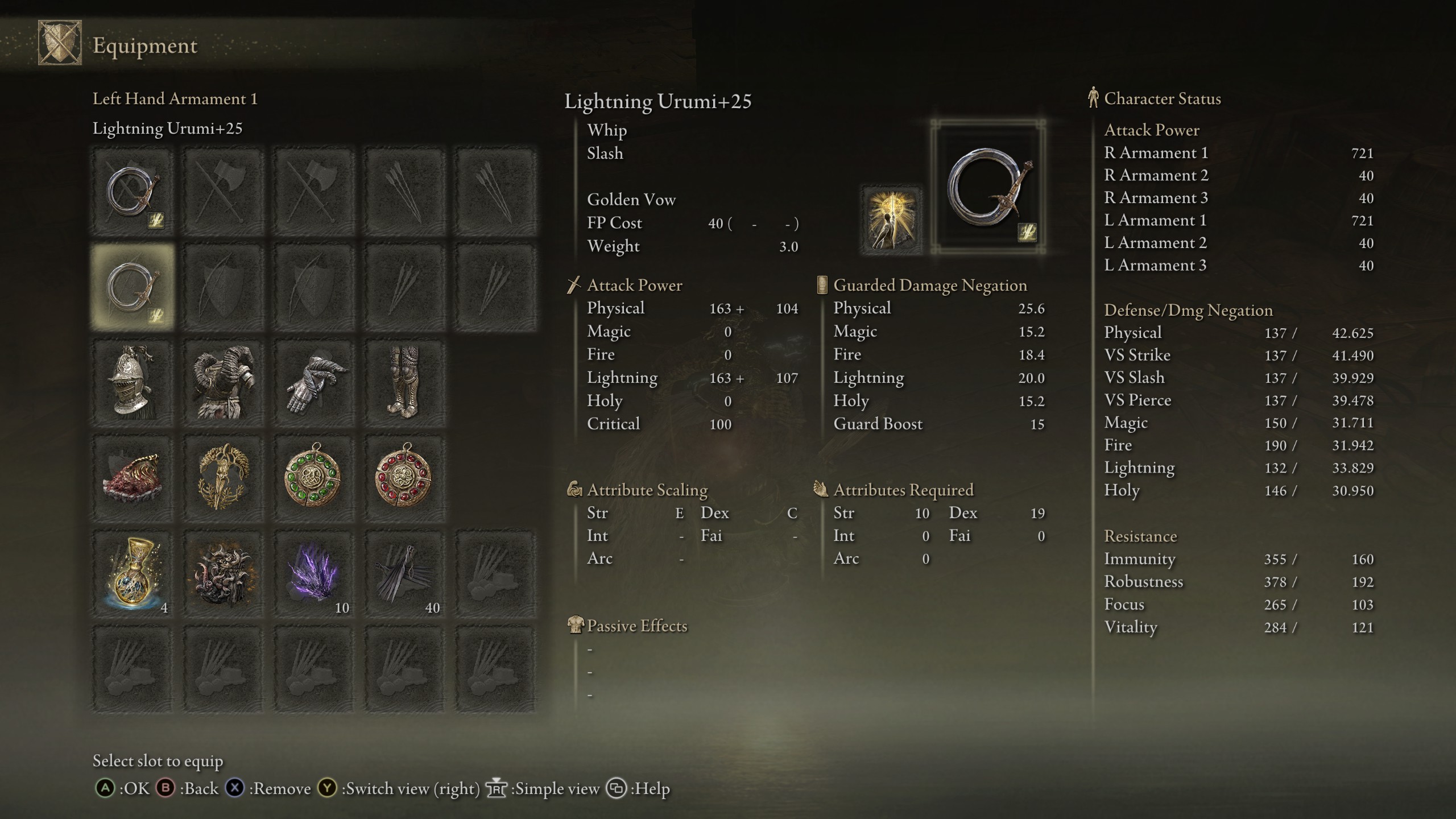 Point 1: What a Ram needs to be happy?

- Another L1 button to fix your pad.

- Quite a lot of FP and tones of stanima for constant, unstoppable ramming chase.

- A lot of HP and decent damage negation as they will be trying to ram you out of Ram business.

Point 2: The tools of Ramming.

- I guess anything that fits for you and it's not too heavy.

- It's also good idea to have some stuff that is reliable with finishing people who has not been rammed to death for some reasons and with low hp, trying to run away from The Ram.

- Naturally, there is only one choice for armor. Depending on used weapon weight and Endurance investment, not whole set can be used sometimes, but there is plenty of helmets or gauntlets that fits rammy image pretty well or even more fashionable than original parts.

- Lightning Scorpion Charm is not on option. Damage output is lower comparing to Shard of Alex and it lowers defense so seems to be useless in this case.

- Greenburst Crystal Tear is some option but I don't think it would be considered as rammy-positive to replace Crimson Bubbletear by anything else.

- Regal Omen Bairn and Gravity Stone Fan or Fan Daggers. These make almost none damage with this build but that doesn't matter as Ramaphobis will dodge it anyway and you will ramm them this ram or another...

- Grace Mimic to be dropped on the ground after victorious ramming, to light your opponent a memorial candle.

- Flame Grant Me Strenght is an option. To be honest, it does not make so much difference and it requires Faith=15. I will rather invest these points in some more ram-friendly attributes but it depends what class you are going to use as Spamramramanator prerequisite I guess.

- Consumables : Exalted Flesh, Boiled Crabs, Greenturtle Necks - all optional. I will use Exalted Flesh in further part of my ramming. Please just keep in mind that you can have one of these active same time ( so eating Flesh after Crab will boost your damage but will reverse defense boost from Crab and so on...)

- However - if you are in deep love with Flame Grant Me Strenght, just go with Frenzied Flame Seal. It's the seal that scales anyhow with Dex and it weight 0. You may thought it was made for madness builds but in fact it was made just for Sparamramanator.

It was tested of beefy mobs, wielding Warped Axe, near Underground Roadside site of grace.

From my PvP testing, as damage taken depends on opponent's negation, it is around 800-850 rams per ram. As most players have ( I guess ) 1800-2000 HP, ram-count needed to ram them is various and it oscillates from one to three full rams per one opponent to be rammy-rammed.

Kind of “partial” rams happen during ramming and these deals lower damage but still put opponent in panic and drain their HP and sanity as they face their bleating fate incoming.

If you will meet someone with reduced lightning damage ( by casting Vyke's Dragonbolt for example ), it could take only one ram to ram-ram him to his Ram. 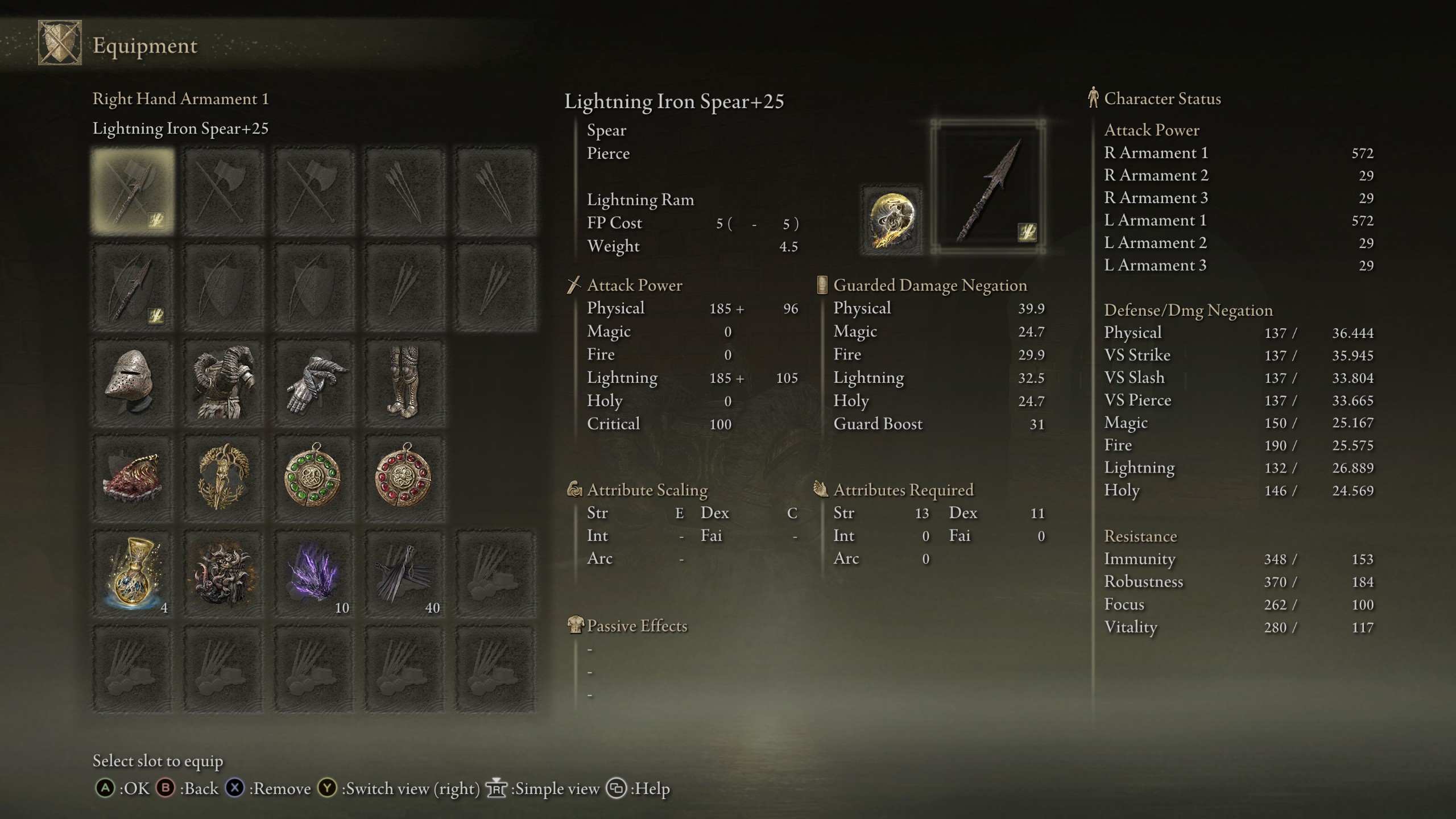 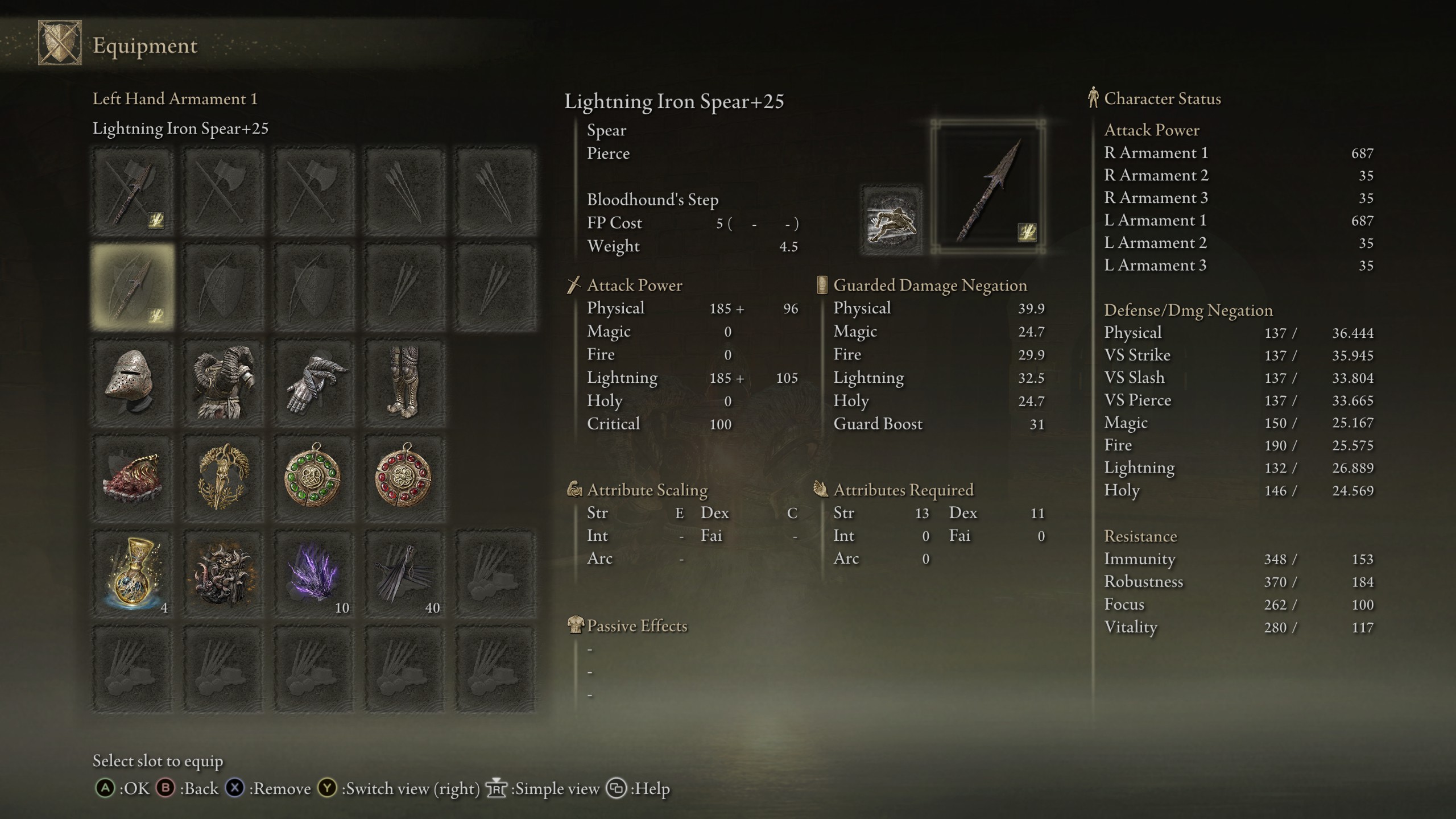 * It's nice to have your Ram fully buffed of course, but I think, Golden Vow replacing is actually benefitial in some ways...

* As a Spamramramamator I want Bloodhound's Step to make it even more unfair and to have an opportunity to chase all these Ramphobics and ram them with all the love this world has seen.

* Urumis are nasty and this charged R2 is definetly respected by all Rams, but in other hand, Rams just don't feel very well with these to be Bloodhounded with.

* Best rammy damage weapon without Golden Vow buff applied, seems to be Misrecorde, at least according to my tests, which are ram from being perfect for sure.

* Lightning Misrecorde without Golden Vow but with flask and Exalted Flesh deals 828 rams per ram.

* Taking under consideration all above, I decided not go this way and make it a bit lower damage but more rammy fun ( at least imo ). Nooram can be perfect right?

* I decided to go with double spear to accelerate effect of Ramminess and to poke my opponent one or two times sometimes, just to show them that Rams can poke too.

* I have chosen Iron Spear as it's pointy and irony, both very appreciated by Rams.

* To double benefits which come from having Iron Spear I equipped two Iron Spears as The Great Spam Ram told me to do in my dreams.

* With two Iron Spears, I had to change my hat as previous one was too heavy for this Ram.

* It is significantly less than Perfect Golden Ram ( 923 ) or even not a Perfect Ram but with Misrecorde as ram tool ( 828 ), but to be honest, in PvP, that does not make so much difference... And how you look and poke does a general difference obviously, as we all know...

So here is The Spamramramanator.

* As secondary weapon, I guess on of another best Bloodhound's Step material is Goldskin Sticher. It's pretty lightweight ( 7.0 ) and have nice poking moves with 797 AR ( after flask and Flesh )

* Double straight sword is also on option. Lightning Longword is best in terms of AR but Lightning Warhawk’s Talon is not much worse and it has this unique charged R2 so these two also to be considered…

* Double Misrecorde is even better as it will deal more rams per ram and daggers are very Bloodhound's Step - positive.

*Many changes can me made here. Most important is just not to loose your Ram identity in a process...

Thank you all for ramming and let the Ram to be with you. I hope we meet to Ram vs Ram some day and I hope you all Ram-enthusiants will have fun while ramming with all these Ramaphobics. Have a good ones!