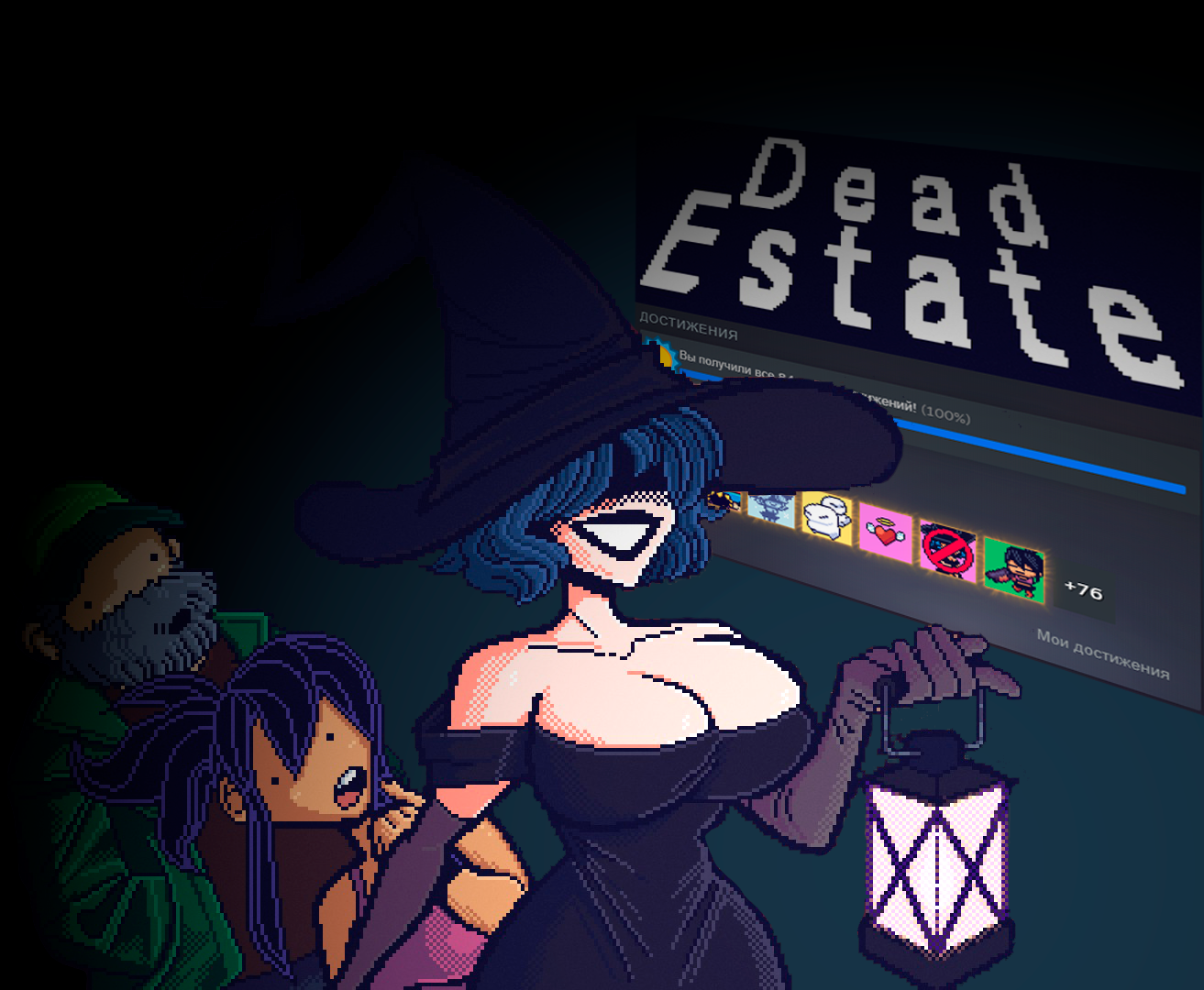 The guide is split in two main parts: Spoiler-free achievements and achievements that ties with the lore of the game and may spoil some things. Similar achievements will be put in groups. My comments will be in italic font. In spoiler-free section some shiets and giggles will be covered by black rectangles like this =>Vanya Nakalyuzhniy lox . In the spoiler zone i will be covering spoiler-y content with this. Let's proceed to the guide: 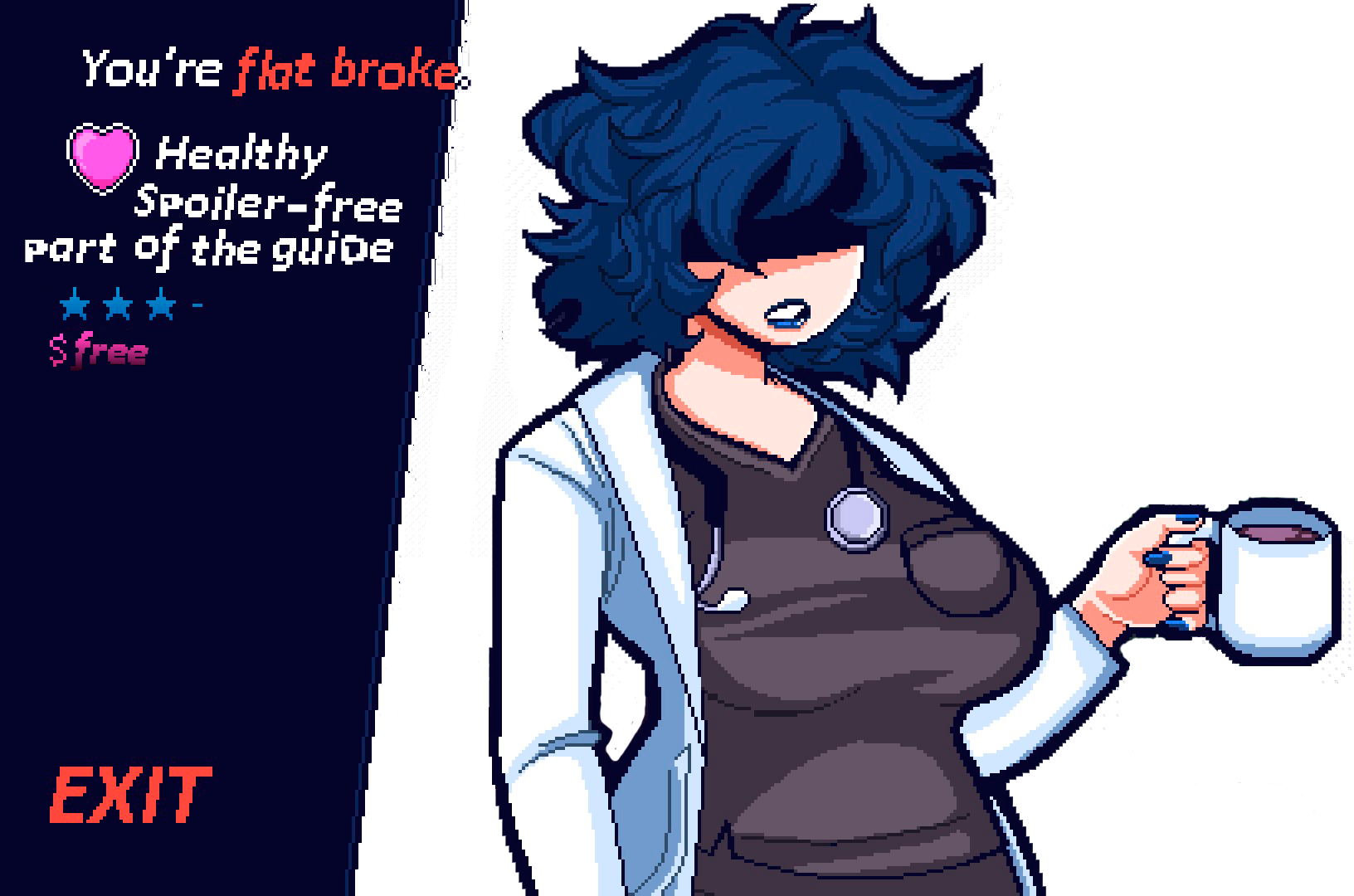 Here is a guide to all spoiler-free achievements:

Kill 6+ enemies with less than a second gap between each kill.

Really easy to compete in a challenge room or on Omega Clot with Jules.

Clear a challenge room in 15 seconds or less.

Pretty easy to complete with Fuji. You need to max strength early and get a little bit lucky.

I find it easier to complete with Jules or Fuji if you are using the base weapon. It is pretty easy to do as any character though, it just takes a little bit of practice, but after that you should consider knocking him every time if he shows up for that hefty chunk of money.

Keep in mind that only real secret rooms count, item or weapon chest room hidden as a secret room on higher difficulties do not count, so you shoud consider looping.

Hope She Notices You

You need to either play the easiest difficulty and get lucky or buy her entire stock on the first floor after looping the run.

Complete a run in 15 minutes or less.

Easier to complete with Fuji. Play the easiest difficulty, max out strength and crush everything in your way.

Leap off the balcony and loop your run.

On the fifth balcony floor don't go up the elevator, go to the opposite side and leap off.

Loop twice in a single run.

Get a Crusher in the Laboratory to land on Chunks.

Wait for Chunks to spawn, lure him under the spiky crusher on the fourth floor.

Kill a Moth using a melee weapon as it's coming at you.

For some reason, Fuji's gloves do not count.

Collect 15+ items in a single run.

Collect 25+ items in a single run.

Collect 35+ items in a single run.

Complete a run without ever visiting a shopkeeper.

I completed it with Fuji, because i have got the hang of this character. Hope for jelly beans or any heart drop increasing item for easy heals. In the run where i completed it i haven't even gone in the room with Witch/Gunslinger/Doctor Cordelia. Too bad, cause she has a new pose each floor.

Max out all your stats with Dr. Cordelia.

Destroy 5+ weapons in a single run.

Play the game on October 31st. You can change the date on your computer.

Pure luck. Just find a golden gun and don't forget to not shoot with it.

Get 10+ reward items in a single run as Lydia.

Loop 'til you get it.

As Fuji, kill a boss in under 30 seconds.

I don't know how not to complete this achievement on the first boss.

Obtain a Mumba Launcher as Mumba.

Pure luck. I have completed this achievement last, so your fate is up to rng gods. Also, Mumba is a chad.

Clear a run without using a single weapon besides your Shotgun as Jules.

Not a hard achievement, but you should keep in mind to not even pick up a gun, cause it may ruin the achievement. Jules' shotgun is one of the strongest starter weapons, so you just have to get used to enemies attacks.

Too Old for This

As Jeff, clear a run without any items.

Pretty hard achievement, not picking up items means no map and no ambrosia, so you should leave red pots till you need to heal up. Weapons are obviously allowed.

Try to complete, if not completed - loop. Search for secred rooms, there are a layout where you can find 2 golden pots. I think that on the lower difficulties the chance of one spawning is higher. Shemets B)

Complete a run without taking any damage.

The hardest achievement in the game, Mumba is an ideal character for this achievement. His only weakness, low hp, is irrelevant and his high agility, awesome starter weapon and increased fire rate will benefit you greatly in the no-damage run. Like i said, Mumba is a chad

Clear the game once.

Clear the game on 'Painful' difficulty.

Do not try completing this mode unless you are comfortable with finding secret rooms. In general, not a hard difficulty.

Clear the game on 'Nightmare' difficulty.

Clear the game on 'X Must Die' difficulty.

The most fun difficulty, money drops are incredibly low and you are forced to deal with Chunks that moves a lot faster, because on this mode:

"START LEARNING TO KNOCK OUT CHUNKS...

Dead Estate has 8 playable characters, but only 2 are unlocked from the start. Here's how to unlock them:

Cory is unlocked by beating the game as two starter characters, Jeff and Jules.

Шкет is unlocked for buying a map on every floor you can.

The King is unlocked after you randomly find him in a test-tube on the 4th floor, The Laboratory.All girls love Mumba. Not just girls. Everyone loves Mumba.

The Real Estate lady is unlocked for beating the game with a $1000 in your pocket.Also, her outfit is fire!

This man is unlocked for ruthlessly jumping off the balcony(looping a run).

The muscle lady is unlocked for having 12 max hp as any character.

Her muscles intimidate me. Yes. I am a little bit jealous.

The Gang's All Here!

Unlock every character in the game.

You can now look at complete and awesomely drawn character selection screen.

Achievements for completing a stage. You are probably already have them. But the guide is called "All achievements" for a reason.

One of if not the worst floor. Yes, i am looking at you, "gross guy" and "creepy bloody lady", you are the worst enemies. Oh, and the boss here is utterly annoying.

Achievements for getting your standard normal ending:

Beat the game as Jules.

A little flex: i've got this achievement on my first run on normal, before the "Die" achievement B) (i know, nobody cares)

Beat the game as Jeff.

Beat the game as Cordelia.

Beat the game as Digby.

Beat the game as Mumba.

Mansion on the Hill

Beat the game as Lydia.

God, her outfit is awesome.

Beat the game as Luis.

Beat the game as Fuji.

Her muscles still intimidate me. 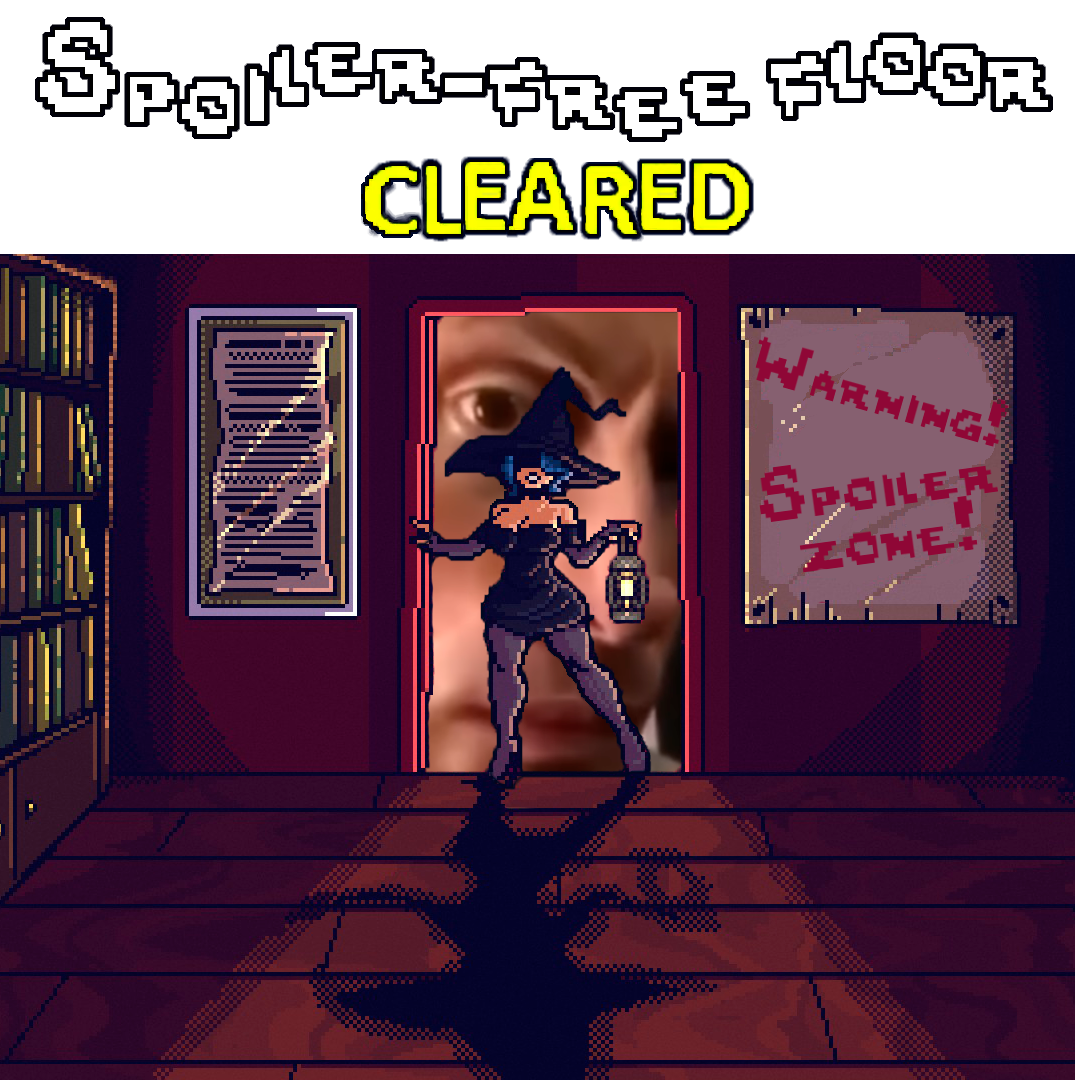 You are now entering: spoiler zone! If you haven't beat the game with Cordelia yet and do not know about any other ending except normal do not proceed further, because you may ruin the fun for yourself. Now this black rectangles => Boo! I am a scary and spooky spoiler! won't cover any gugas and gagas (maybe), but will cover kinda spoiler-ish content. Let's proceed to the second part of the guide:

Complete true ending once, and they are all yours:

You may know how to knock out Chunks, but IT WILL NOT HELP NOW WHEN HE IS CAPTURED BY DOGMA FROM ISAAC.

BLASPHEMY AGAINST THE HOOOOLY SPIRIIIIT!!!

Really annoying floor, but at least it looks cool.

Here's a guide how to unlock cool and not-so-cool costumes for our characters:

Kill Chunks on the final normal ending floor in under one minute as Jules. Just use some normal weapons and you'll easily get this

Get the true ending as all characters.

This skin... It does something illegal... You should go and see for yourself...

Break the arcade machine in the third floor, Attic Sanctum, as Digby.

Complete a run without ever breaking a pot.

My most frustrating experience in this game. Complete a looped run without ever picking up a heart. You can heal using jelly beans item, heal with ambrosia or use any other healing method. Sounds easy, until you accidenty pick up a heart from the enemy that you kiled in a 1 nanometre distance from yourself. And here goes your long-ass looped run down the drain...

Knock out Chunks on every floor you visit. Don't know how it works after the patch that made glitchy Chunks from old set invincible , so i would recommend to just stick with normal path for this achievement. Also, formal style = 10/10 skin.

Unlock the B costume for every character.

Here we are on the finishing line of our guide, only the true ending achievements are standing between me and my long awaited sleep, so lets cut the crap and proceed to this achievements:

Assemble all four parts of the Silver Key.

Complete all the alt pathes and get a key piece from each one.

Press all 3 buttons in the Exit Realm within 5 minutes.

It's luck dependant, but compass makes this achievement incrediby easy.

Defeat a really dope boss! Also, her scream is nasty.

Get the true ending as Jules.

Refuge of the Roads

Get the true ending as Jeff.

Get the true ending as Cordelia.

Get the true ending as Digby.

Get the true ending as Mumba.

A New Career in a New Town

Get the true ending as Lydia.

Get the true ending as Luis.

Get the true ending as Fuji. 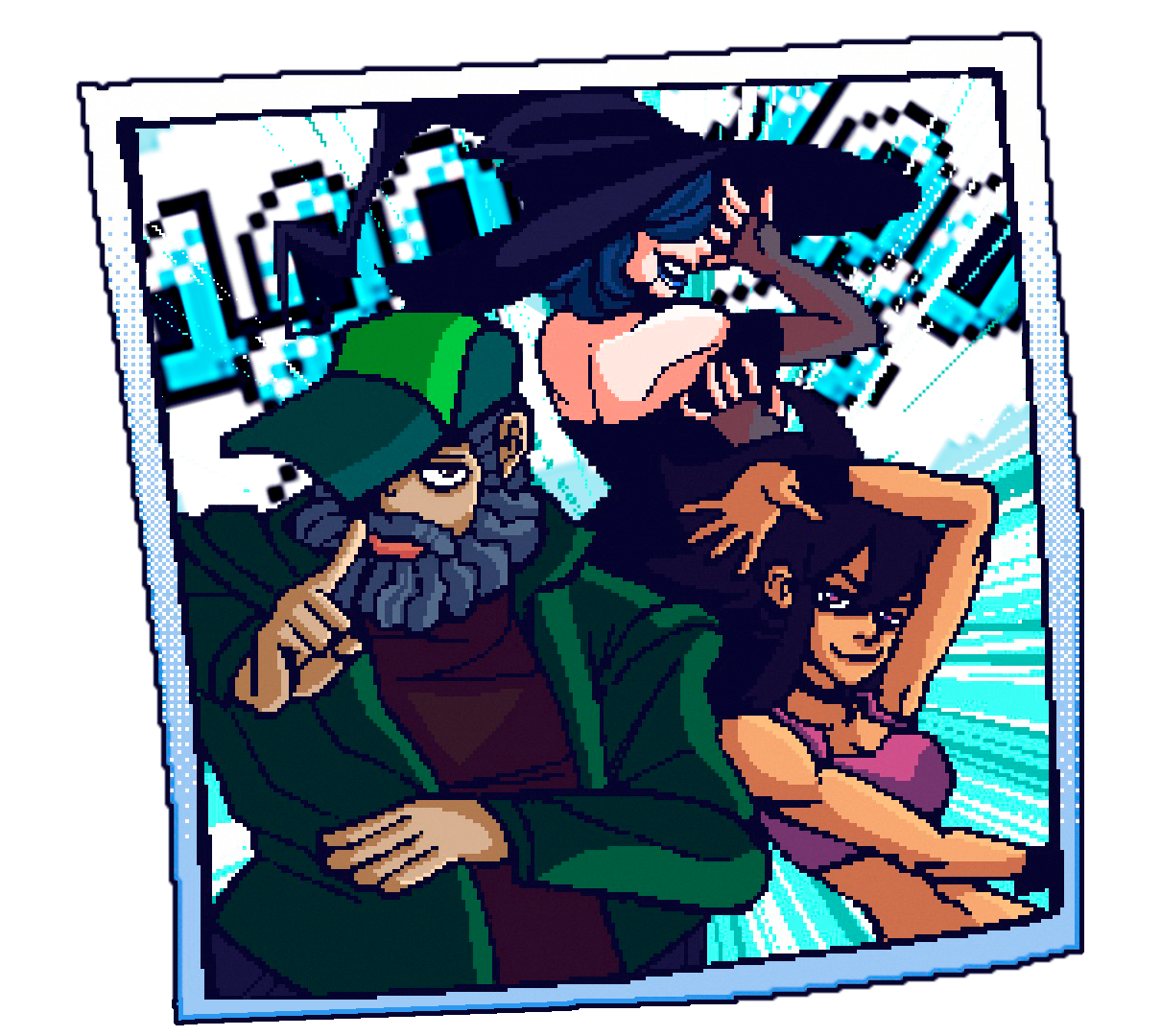 My guide is finally coming to an end, this is a really fun game and i hope my guide will help at least someone. Time to move on to the final achievement:

Thanks for anyone who reads this, please have a wonderful time!

Cory got herself a new gaming chair, so i have updated the preview of the guide. Here's a full picture:

She is learning how to get all the achievements, do not distruct her, please.