Home Idol Manager Bullying: how to stop it and prevent it

Bullying: how to stop it and prevent it 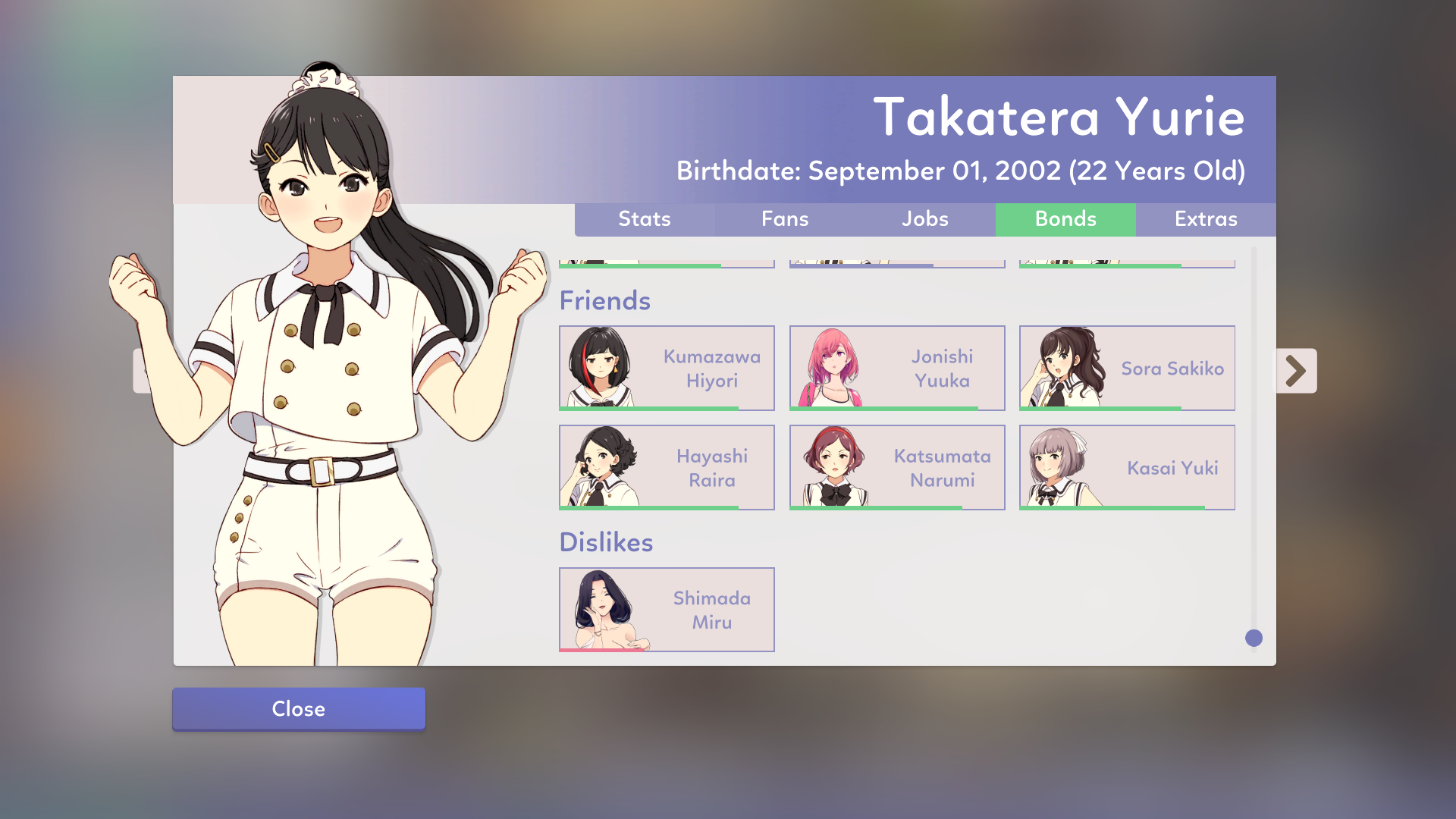 Is when one of the idols or even an entire Clique torment another idol.

If you don't prevent it in some way, an idol start hating another and this is going to happen. A lower Team Chemistry is not the end of it. In game mechanics the targeted idol will lose 10 mental stamina points per week. And of course she wont be happy of verbal abuse, harassment, etc... and try to accelerate her graduation day so she no longer have to endure the abuse. Depending on how much money and time you invested in the audition, training her, making she more appealing, spa, the promotion to get her fans and perhaps even a side job contract with a big Liability. This can hurt you from just a little to quite a lot.

Example of a warning signal:

How To Stop Bullying

You can take actions from quick and drastic, to time consuming that require a lot of interaction with the idols. You should try to solve this quick, more so if the bully is a member of a Clique with two or more members because they will join the bullying.

1 - Graduate the criminal idol: If you don't have the patience and think that she is not worth the trouble you can just graduate her. But if is two or more idols this probably is too costly.

2 - Graduate the victim idol: If you don't have the patience and think that she is not worth the trouble you can just graduate her.

3 - Transfer the bullied idol to a sister group: Only possible if you created another group.

5 - Try to stop the bullying: If you don't want to fire or transfer any of the idols. This is the long road.

First: probably is better to ask an idol not involved on the bullying. Even if you figured out who is the criminal or the ring leader, you need someone to snitch so you can take action. Idols whit paranoid or snitch trait are very good choice. The problem is that the gossip choice seems to give random answers and sometimes the gossip is wrong. So get ready to hear a lot about idols dating and even a wrong criminal. It can take a lot of tries to get the right answer. These can end holding back your schedule plan. Or perhaps you can cheese it by saving before asking and reload until you get it right. You can figure out the culprit by looking at the bond section of the idols and see who hates who or perhaps check the identity of the bully during the scene in the break-room. Not having a break room may potentially stop bullying from happening and skyrocket Team Chemistry, but rely on spamming Spa for recover Stamina sounds like a recipe for going bankrupt or taking too long for get anything done.

Third: If you need time for the snitch or get influence a temporary measure for partially protect the victim is having the victim's wish fulfilled because granting the wish not only raise influence but also make the idol recover all mental points and for 4 months the idol don't lose any mental point. She still may end telling you that she want to graduate so kick the can down the road is not advisable.

Fourth: If the victim is bullied by a Clique convincing the ring-leader to stop usually make the others stop, but is possible that one refuse to stop and you need to convince her to, to stop bullying by using the influence you have with her.

Fifth: bullying will restart if you don't take action to end the hate of the criminal(s). This can be done by making both MC a song in a concert, do a single in the same row, one mentor the other or both host a show as permanent cast. It seems that if they start to get along there is a small chance every week the bullying stop, but better not rely on chance more so is there is more than one bully. Again this can take time, so plane ahead and multi-task the snitch, influence and end the hate. So only request to end the bullying after make sure that all the bullies are not going to re-start the next week.

Fixed: Idol getting bullied again right after you stopped bullying

How To Prevent Bullying? 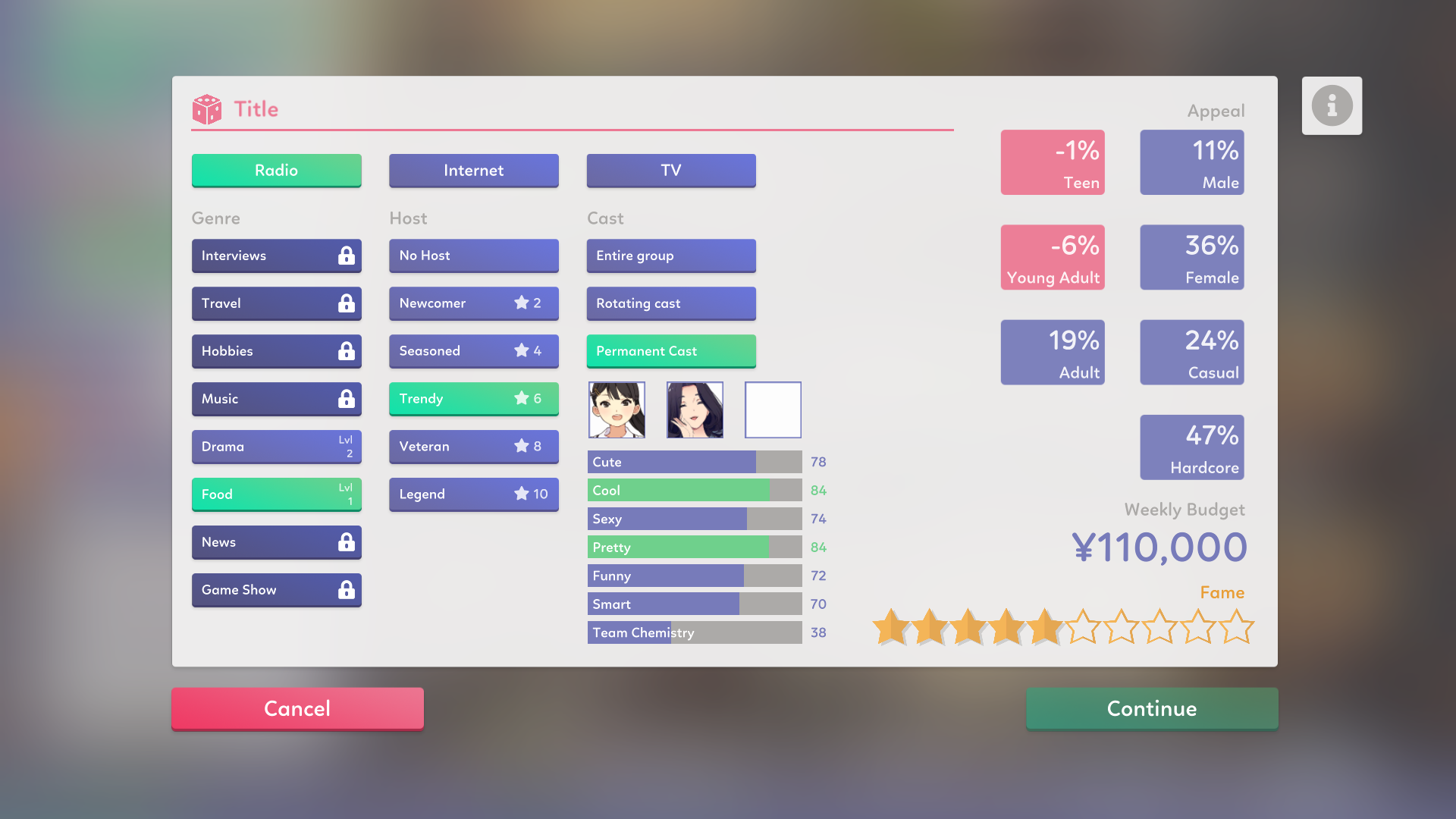 Solve bullying take time or cost a valuable idol or can wreck your plans by transfer to another sister group. You don't want to experience this again and the idea of managing lots of idols may make you think that you can go bald from the stress. So what can you do? The same things you do for end hate. Instead of check if hate show up in the bond section of the idols and act only then, make all the idols permanently host a media show and everyone MC at least one song in the concerts. So every week they keep at least a neutral opinion of each other and once a month they get a boost to the Team Chemistry. It slowly fall over time so try to release the singles after concerts may be a good idea. Also I do a bare bones radio show for saving money and stamina, so I don't know if a more expensive high-quality show can actually boost Team Chemistry every week. If someone experiment and find out that a better show may be worth the investment please make a guide about how and why a media show can be good.

Notice the low Team Chemistry at 38, neutral is at 50. The show cost in stamina is equally divided among the cast, so is better to ad another idol with low Team Chemistry. Switch back to "entire group" after fixing their relationship.

I did this prevention strategy in normal difficulty and history mode for some game years and never experienced bullying again but maybe i just lowered the chance and got lucky. In ease mode it may not be necessary, in hard mode it may require extra actions like check who is getting close to hate in the bond section and change the positions on the singles or expend some weeks with the media show concentrated on the three idols that require more bonding time. History mode may or may not change the odds of hate showing up. Needless to say an update can change the mechanics.

That's my humble opinion. I hope that it help you or at least give you some ideas.