Home HighFleet How to be a cryptographer

How to be a cryptographer

If you did the prologue and/or have played some hours, you should already know how the whole "thing" works. However, I will make a short and brief explanation, just in case.

Basically you receive radio transmissions (proccess explained in detail in the prologue and/or in other tutorials) and you get to see what the radio receiver has obtained.

In the early stage of your campaing, you will probably find very few encrypted transmissions, but these will become more common (and finally the only type of transmission) as you advance to Khiva.

The radio station, as you open it, will show the radio key knobs, showing 4 numbers of 3 digits (ranging from 0 to 100) under each knob. At the left of the knobs there is a "cypher-key" button that, when clicked, shows a "template" that allows you to place together pieces of the radio keys that you obtain after a battle. It works as follows:

You win a fight and get to obtain radio keys

**Note that the third image shows a 34 rather than a 3, this is because I got the images in diferent moments 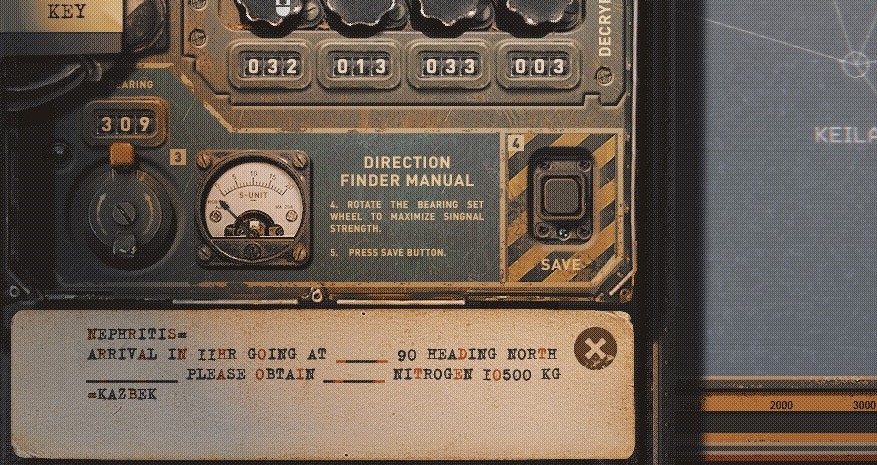 Now that you know how de-crypting works (you should by now), it is time to use our smooth brain to obtain the code without the whole cypher-key or without one single number of the combination.

As you get to see (sadly) many transmissions on your playthrough, try to note the most common short words that you can possibly note. As the de-crypting system in the game is rather simple, it is enough if we get to de-crypt one 4-5 character word using clues from previous messages.

I usually get special attention to these words:

*** Note that looking for prepositions is quite simple, but the preposition may get us to know only 2 codes of the cypher-key, letting us to guess the rest of the numbers by chance and only if we get to recognise other words knowing part of it

These words are the ones that you should be looking for, how?

You can obviously take more words into account, such as the cardinal directions (south, north, west and east).

The BEST and easiest word to look for is the word GOING. This word has a easily recognizable pattern, note how the first and the last letter are the same.

Put your knowledge into practise

You get a transmission and it is totally encoded. First, pause the game with space (Default) so you get unlimited time to keep with your de-crypting progress.

See the message, start looking for words that follow the pattern that I told you. Search for words that have the number of characters of the words you are trying to de-crypt.

***Important note -> Note that some knobs can change the first and the last letter of some words in the message (this may not happen always). As you may already guesed, you should pay attention to these knobs as they might make your work easier. For example: if you see that a knob can change these letters of a word that looks like this CXIGF , you can try to change that knob until the first letter is a R. If you are lucky enough, the word might end up looking like this RXIGE. If it is the case, turn the rest of the knobs until you get ROUTE

With the example of the image, following the important note, we should be looking for words of interest. As soon as you sart looking, you should immediately see the word ISMOI.

This word should get special attention as the first and the last letter can be changed with the same knob.

The following part is the easiest, simply turn the knobs until you get the hole word.

This is one easy example that allowed us to understand how the whole proccess works. As I already mentioned, the easiest word to work with is GOING, but this one is (obviously) not present in all the messages you get, so you should train it with other words and combinations.

Now A Crypto-expert (not A Cryptocurrency Expert Tho)

As everything in life, this skill is improved with experience and "training", even though this is not specially complicated.

Really hope you got to understand a mechanic that maybe saves you some resources and time in your campaing, it might even make your playthrough easier.

Don't bother putting any error in the comments and/or adding useful information for other Grand Dukes. Thank you for reading until this point.