Clean Racing - How To

This guide is aimed to give you a better idea of what clean racing is. Probably most of you already know that ramming someone intentionally is not ok. These rules are not set in stone and you can play however you enjoy the game, but please do so without ruining it for the others.

Here are the suggested guidelines for clean racing experience. I did not come up with them, and a lot of the text and all of the images you are about to see below is copy-pasted. You can identify it by the quotes around those parts.

Source of images (and a lot of detailed useful info):

"We mostly race with contact turned on (no ghosting) because it requires an extra level of skill in overtaking and defending from opponents. This does not however mean contact is allowed. Some side by side rubbing going into a corner when a move is already mostly done cleanly is fine, but knocking someone off-line or causing them to crash most certainly isn't. If this happens as an accident you are expected to pull over to the side of the road away from other cars and wait for the person you hit to get back into position as an apology."

You can use forza link to make it clear that someone caused you to have an accident, in case they are not sure/ did not find out. Useful commands can be found in category orders such as "Hold up, mate!" "Wait here". Use this only if you are COMPLETELY sure it is their fault for your accident. Similarly, if someone tells you that you caused their crash but you are COMPLETELY sure you did not, then obviously you won't wait. 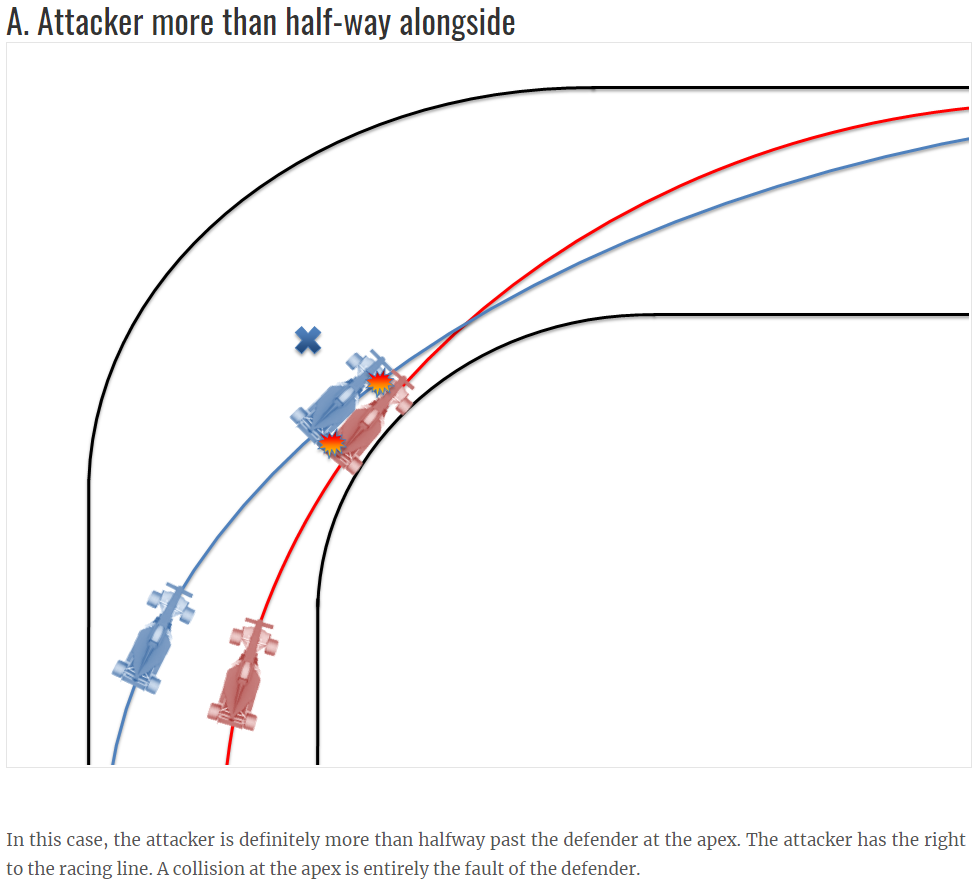 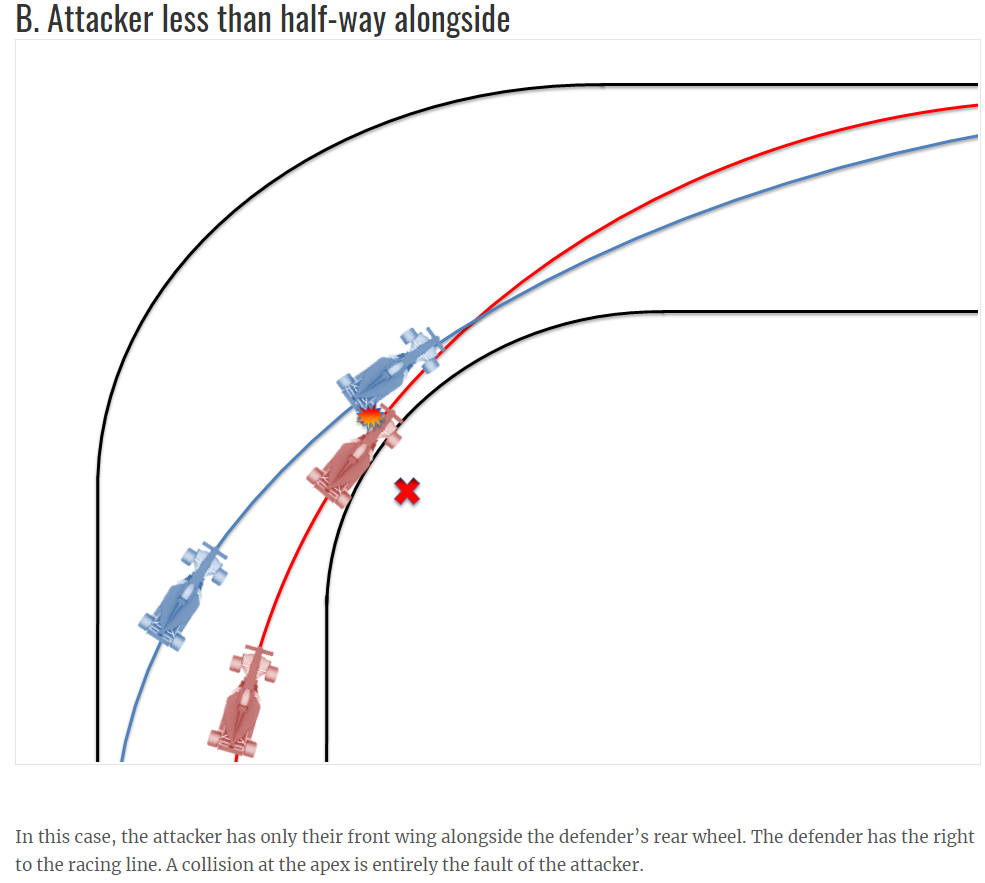 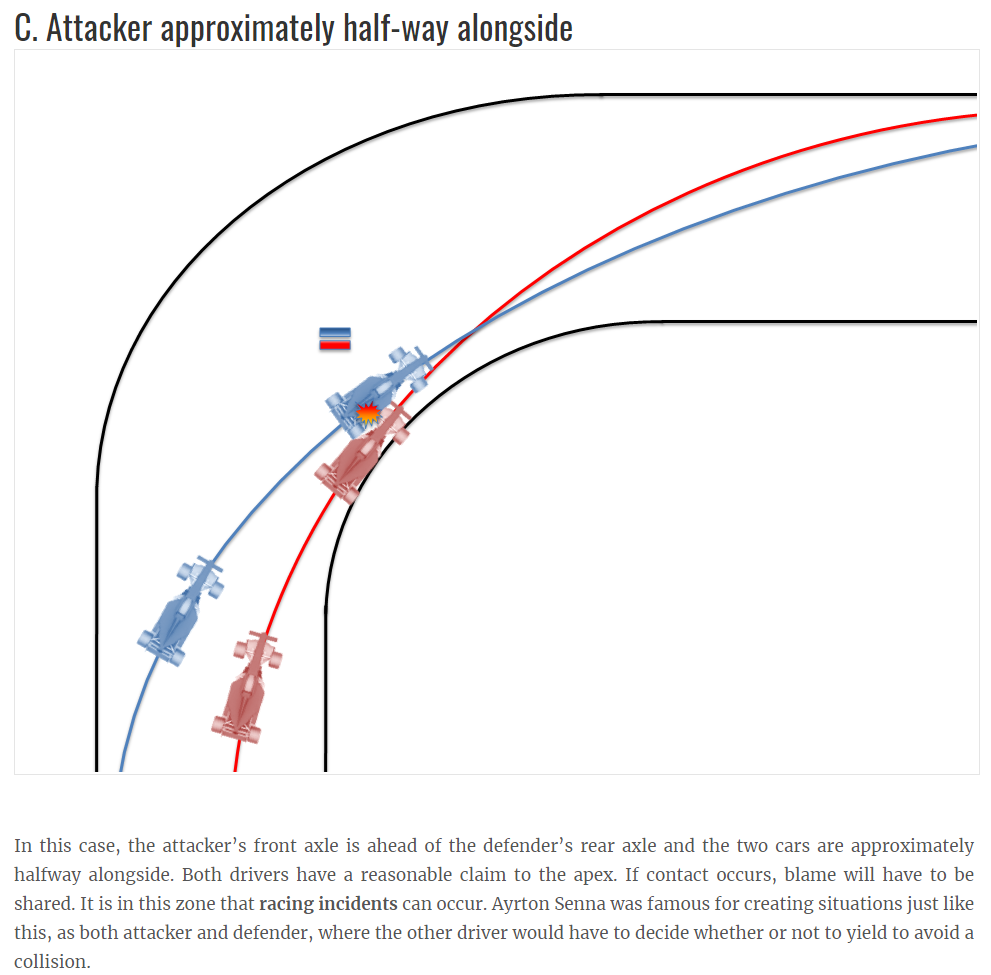 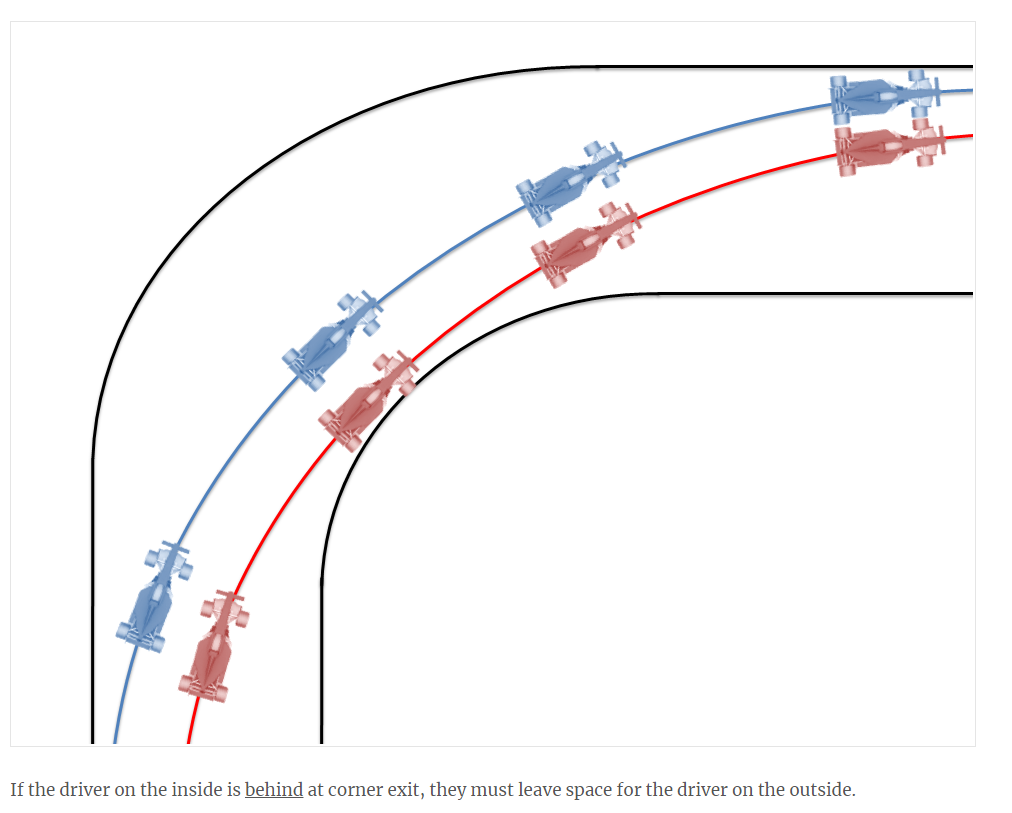 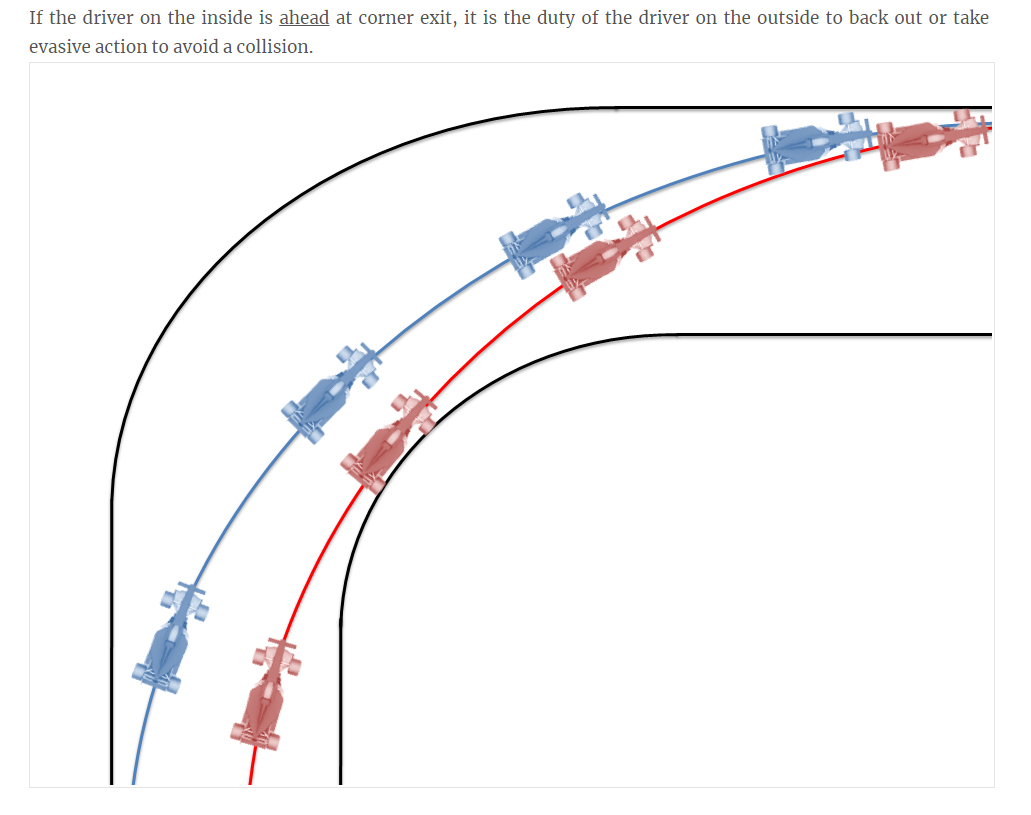 Pretty much all the collisions, ramming, crashes etc. happen during overtaking, especially when two people try to claim the racing line. This can result in one or both drivers taking a less optimal line around the corner.

"Remember that there will be people in a race who are both better and worse than you, and that it will vary from track to track and car to car. If you are stuck behind someone who is racing cleanly but is slower than you and you can't get past then that is on you, not them. It is not an excuse to rage at them or knock them off - get better at overtaking."

In most (but not all) cases it is the attacker's responsibility for accidents caused when attempting overtakes. E.g. you failed to brake as fast as the person in front of you so you crashed in their back ramming them off the road, it's on you!

In this case the defender must make space for the attacker.

In this case the attacker must yield.

Stalemate. If a crash happens its because of both the attacker and defender.

"If you are on the outside of someone going around a corner and you aren't at least fully alongside their car you should back out, as they are well within their rights to take the racing line and run you out of room on the outside with any resulting crash being your fault. Conversely if you're on the inside and someone is fully alongside you on the outside you must give them a car's width of space."

The attacker must leave space for the defender.

The defender must yield.

Again, if it's hard to tell who's ahead, then both drivers are responsible to avoid collisions.

"You can only make one move on a straight to defend your position. You can't weave from side to side to keep someone behind you."

"If you're about to go a lap down and the leaders are coming up behind you, safely move over to the side of the road and let them past without losing too much time. Do not under any circumstances actively block or defend from those who are trying to lap you."

"If you cause an accident with a car you are lapping, you must still wait for them to get back physically in front of you."

You can probably see that collisions can occur even unintentionally. Online, because of lag, it is possible that only one of the two players experiences the collision and crashes. So keep that in mind next time someone rams you off the road. But most of the time it is pretty obvious if its not lag, especially overtaking on straights...

I hope you now have a better understanding of how you are supposed to behave while racing. And next time someone rams you, don't send them angry messages, it certainly won't improve their behaviour and they will probably enjoy you being mad. You can try to be polite instead and refer them to this guide, I am sure there will be at least one person who would stop being a rammer.

Finding People To Race Cleanly With

If you are interested in clean racing feel free to add me both on steam and in forza (nickname "Speed Invasion" but probably appears in xbox as "Into Moshpit").

Also feel free to join my group for clean racing, where you will find more people who are interested in the same thing, regardless of skill level.

Of course if you know any racing FH 5 communities where clean racing is the standard, please list them in the comments, and if I am not too lazy, I might even add them here.