PSA: Don't Use This Guide Anymore!

Keeping it here for archival purposes, reminds me of the good old days. I might look to make an updated guide in the future but for now the low down is;

Go to Quarrymill (South Shroud) and do Palace of the Dead until lv60.

Go to the Onokoro (Ruby Sea) and do Heaven on High until lv70.

Above all else though if you're a new player, main scenario quests (MSQ) should be your HIGHEST priority. You can level your first job all the way to max level just doing the main story.

This is a guide for the best locations I've found to level in by using the FATEs.

The main thing you'd need to know is "tagging." This basically means getting the first hit on an enemy as it will get you more exp. This is also where the Party finder comes in useful, as it's not just you tagging but multiple people (meaning you can get exp off your part members). If you don't know how to use the party finder, in the chat box select "shout" and type LFG ("looking for group") Fates, people will ususally invite you fairly quickly.

The main point to this strategy is to farm in places slightly higher than your own level, but still managable to kill the mobs there, so using the Party Finder is highly recommended.

A huge thing people miss is the Hunting Log, which is actually one of the most rewarding things out there. Don't avoid it!

There shouldn't be any major stuff here, just complete your class quests, do the Hunting log and just kill things. If you have the collectors edition of the game then wear the Helm of Light as it gives you the 20% extra exp until level 10.

The majority will appear fairly close to the Aethernet Crystal, and some out near Swiftperch.

Focus mainly on the FATEs that appear in the Northern area of the zone.

The main ones to focus on ill be along the east of the zone, although at the bottom end at the coast a boss FATE will spawn and if you stay the whole way through the reward should be around 20,000+ exp. Watch out for his AoE attack as it can instantly kill a character under level 31.

As a precaution I would recommend setting the Aethernet Crystal as your home point, so when you return you can get back in the action fairly fast.

No specific places in this zone, just stay in the middle of the map until one spawns and run to it.

The FATE "Dark Devices" makes this zone slightly better than Mor Dhona, although it's down to how many players are around doing the events. Getting into a Party (for both locations) is highly recommended.

I saw some people requesting this one and thought it would be useful to put the info on here.

Basically what's happened with HW FATEs is they aren't scaled, so you'll be getting the same EXP farming in any HW location as you will in Eastern Thanalan.

From what I can tell, it doesn't look like this is going to change any time soon

It would seem like the best ways to level classes in HW would be to grind out the highest level dungeon you can do. It seems to be on average every 3 runs you will gain a level.

This of course isn't incredibly fast but Yoshi-P himself said 50-60 will take a fairly long time to achieve.

If anything new shall rise from patches I'll make sure to update this section to the best of my ability, most of my classes are 50 so I can do a lot of first hand tests like I did for the ARR results above.

Thanks for reading, and enjoy punching, casting, shooting and slashing your way to 60!

JessPlaysUK posted a comment saying that the HW stuff has now been scaled properly, and I have tried some FATEs out to confirm it today.

I have also recently found out about a perfect rotation of Boss FATEs, which gives a lot more EXP than other general FATEs dotted around. For instance, I played some with my level 55 MNK and got 150k EXP from Bosses compared to 30-40k EXP from general.

I'll try to get some more info on the full rotation up ASAP.

Finally got round to doing the FATE cycle so I have the names and locations now! This is currently the fastest way to go from 50/51 to 60 I know of, FATEs are extremely superior to dungeon grinding as old "One run=one level" rule is no longer there, it seems to be a real waste of time unless you want gear/minions. 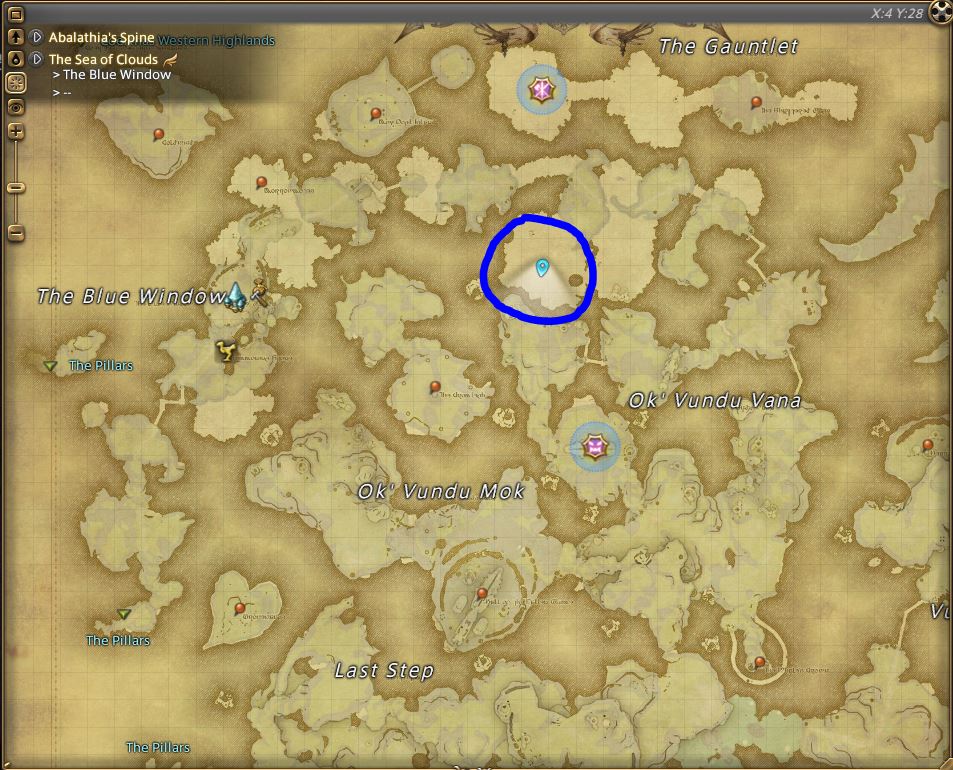 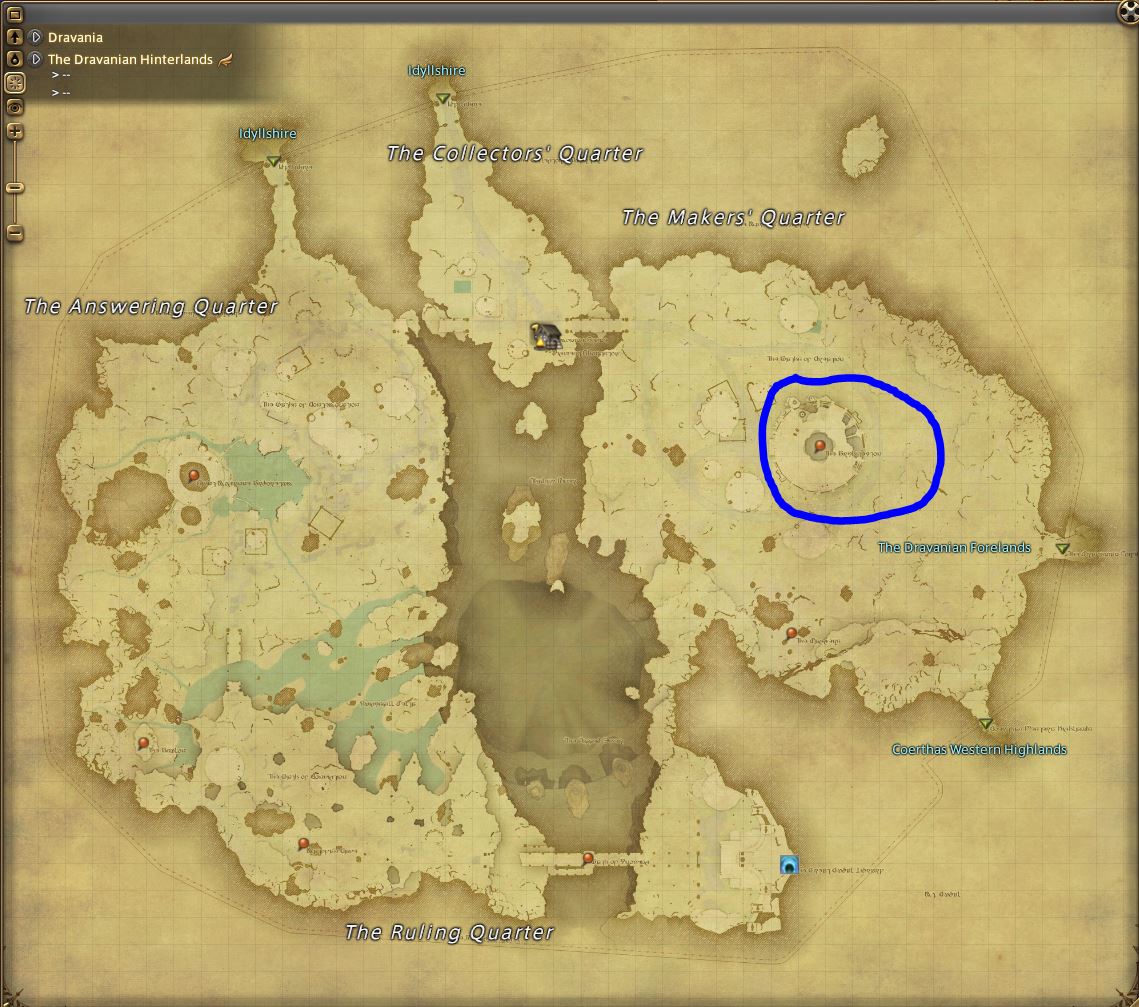 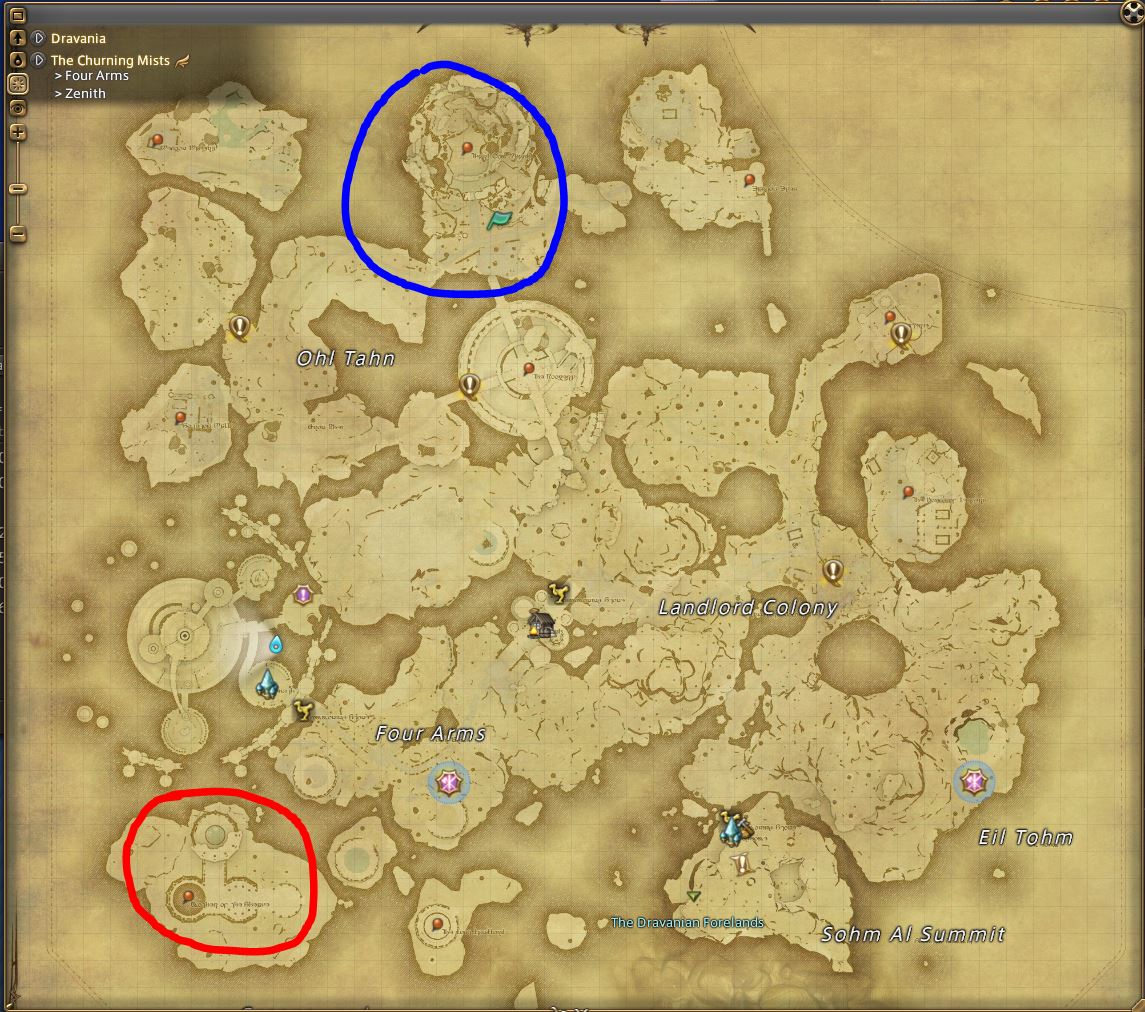 All the fates here are in order, they should spawn one after another (or at least they do on Ragnarok)

[Blue/Red] - The circle in which it spawns

~B~ - Boss - Final FATE, lots of exp and sometimes an item/minion

THE SEA OF CLOUDS (Ok'Zundu Crystal)

~B~ On Dangerous Ground