It's a really cool mode, and addition to the game. You can use it to discover the history of your world, and eventually uncover secrets and sometimes epic stories if you look hard enough. (Like for example, you'd enter the name of your civilization, or your favourite dwarf into the text box, and then try to find the story in the layers of text phrased like in game notifications). It can be a fun tool to help expand on your knowledge of your own world. My favourite is using it to look up the history of a dead civilization, and see how they fell.

**But Legends Mode Is Hard To Start Using**

Not only because of how abstract it can be, but also due to the fact that under normal circumstances, you can't access the mode for a world you're already playing an active fortress in (Which makes it hard to use if you want to learn something about your world's history in game).

**But There Are Some Solutions**

Firstly, whenever you want to take a peak at the annals of your world's history, you could choose to retire your active fort, then parse legends, then "unretire" it again in the embark screen after you close legends mode. But I would say... DO NOT DO THIS.

It's obviously a pain in the butt to do all that, but the real problem is that retiring and reclaiming a fort can sometimes cause DF to bug out big time (The game resetting the parameters of underground lava or aquifers so your fort might flood when it was structurally sound before, or for some reason throwing all your items all over the map if they were in containers are prime examples of issues with reclaiming). So there is a better way.

Secondly, (And what I wanted to talk about) you can take advantage of the "Multiple timelines" feature. Basically, when you abandon or retire a fort, you get the choice to "Save to this timeline" or "Save to another timeline" (Among other options). You can then have two active copies of your world. And easily hop out of your game, and check legends in the other world to learn something, then hop right back in. It's especially worth it if you have a really cool world you spent a long time generating, and want to be able to read it's history whenever you want!!

But the problem is, there seems to be some bug right now where "new timelines" are overwriting eachother when trying to save them normally. Also, you start to get an ugly looking save menu if you do this for multiple worlds.

**So Here's How You Can Keep An Open Save For Legends And Have It Work Out:** 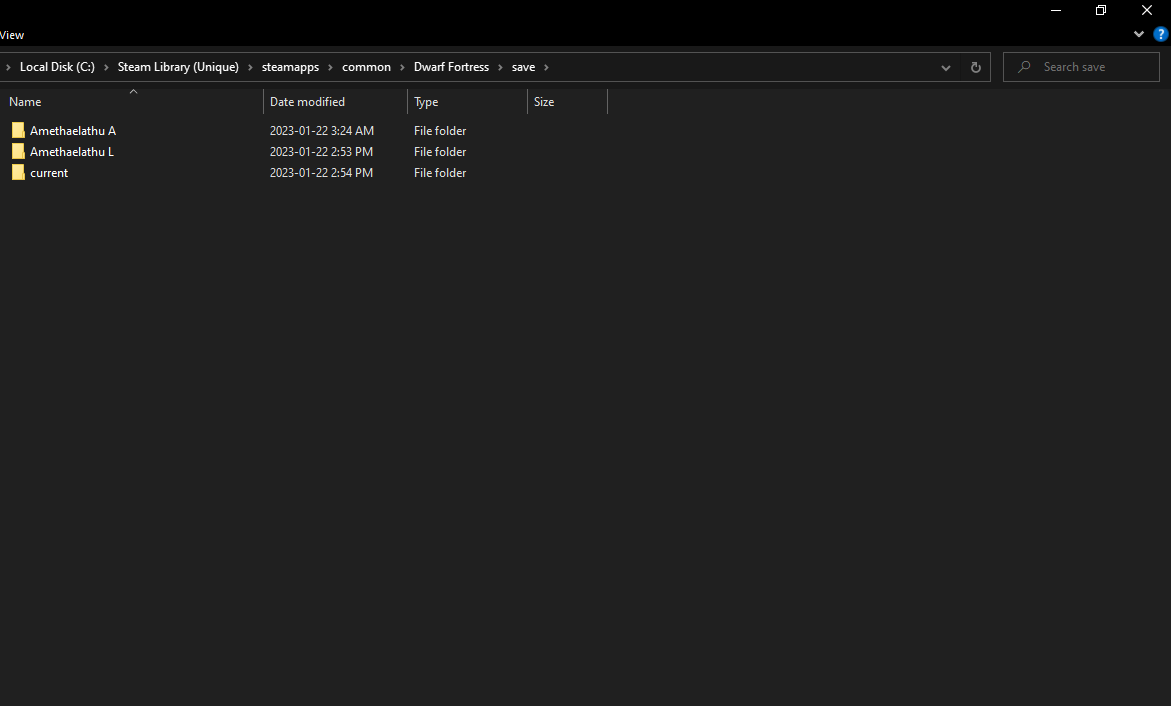 First, it can be helpful to make sure to clear out your saves folder so that you don't accidentally mess up a save, or get them confused. You can do this by simply going into the game directory for dwarf fortress (Probably in Steam/Steamapps/Common/Dwarf Fortress), then open the "Saves" folder. You can Literally just grab all the files in there, and Copy them into a new folder on your desktop, and slap them back in afterwards (This is also how you backup a save to keep it from corrupting).

So whether or not you decided to back up your saves, I recommend clearing/deleting all the contents of your save folder (But not the folder itself) before trying this, as it just makes it easier to manage.

So now that your files are all neat and tidy, here we go:

-Create a world you like (It can take a while to get something really special).

-Now, make a dummy fort that you're just using for the timeline split.

-Now start up the fort, Make one manual save after embark, then immediately after, abandon the fortress.

-When you're in the abandonment screen, choose "Save to new timeline".

-Name the save "Legends"

-Now close the game, go back into your save file, and re-name the new region folder it just created. This will keep it organised and preserve it from the save overwriting bug. (I like to name each save folder "The name of the world" Followed by the first letter for either "Legends or Active").

-In your save menu, you should now have one active game, and a world save called: "Legends" Folder:"Worldname, L"

-Now, start up the save for your current dud fort again, and repeat the process of abandoning and saving to a new timeline and renaming the file; but rather than naming the save "Legends" call it "Active" and put an A instead of an L at the end when renaming the new folder it creates.

After all this, you'll have 3 saves in your files. The current game in the world (Which you can promptly delete), and 2 permanent versions of the world. Now, the one called legends is for browsing legends mode, and the one called active is the world you can play your games in henceforth.

Now you can check legends mode for a world you're already playing in, and (to my knowledge) the saves are safe from the current overwriting bug causing issues with using timelines in general. You can also repeat this as many times as you want, so long as the worlds have different names.

If this helps out even one person, I'll be happy.