Home Wildermyth A Practical Guide for Age of Ulstryx

A Practical Guide for Age of Ulstryx

I judge this Campaign's difficulty as:

"Be wary, overconfidence is a slow and insidious killer"

Misplays could be harshly punished

Batman has Robbin and even Spider-man got invited for the Avengers. So don't let your chars isolated in the battlefield. Keep them together and well positioned. Always prefer walling in order to mitigate damage. A good hero is an alive hero.

In an ambush your hunter can excel and farm some good XP even on the very early game in most of the cases. I disagree you should be patrolling infested tiles in order to be able to move freely. I like letting the Hunter scout everything alone while my party works on something. Then they regroup to fight the next tile and it repeats. If the Hunter is ambushed you'll be facing 2 enemies, mostly. So you just have to pick extra damage, go for the weaker enemy and kill it. Jumpjaw is pretty good, Quellingmoss and Ambush are pretty useful too. You'll just have to take your time, keep running away with Silkstep and that's gg. 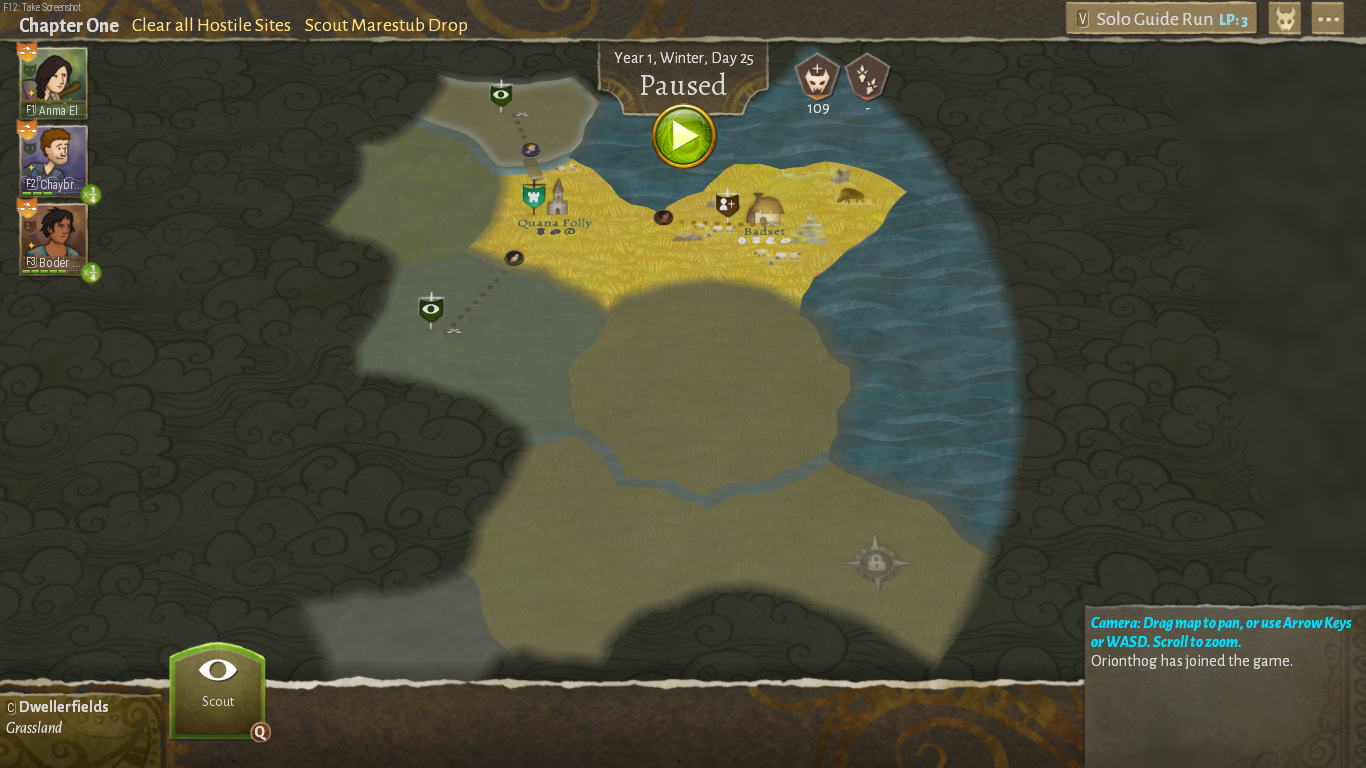 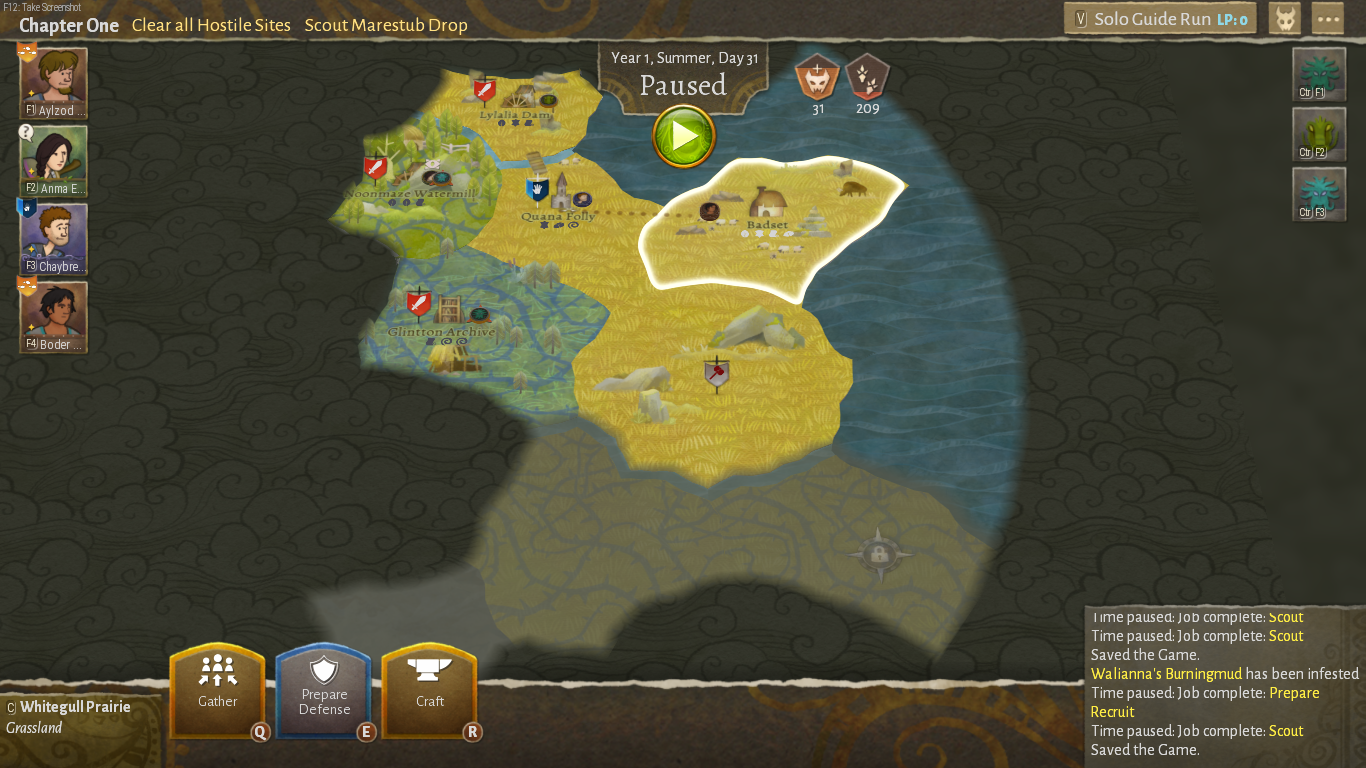 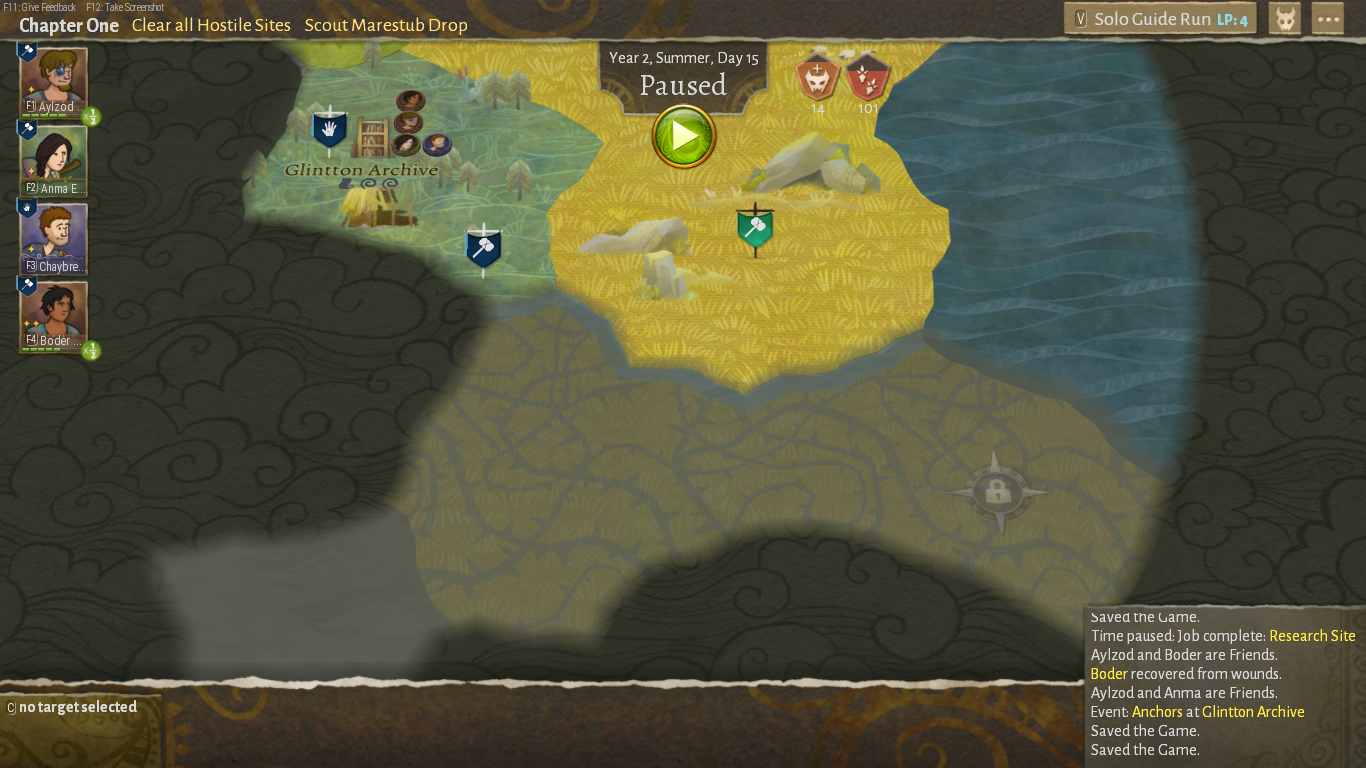 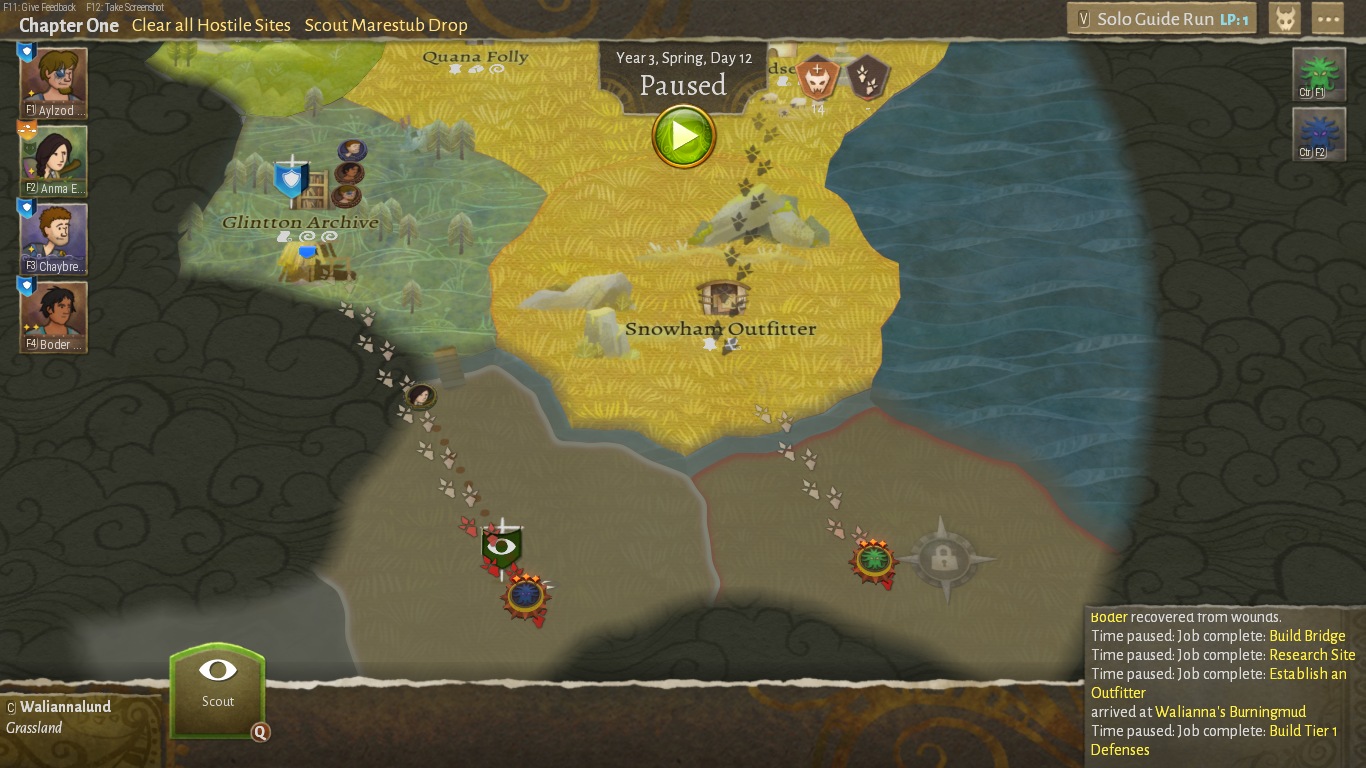 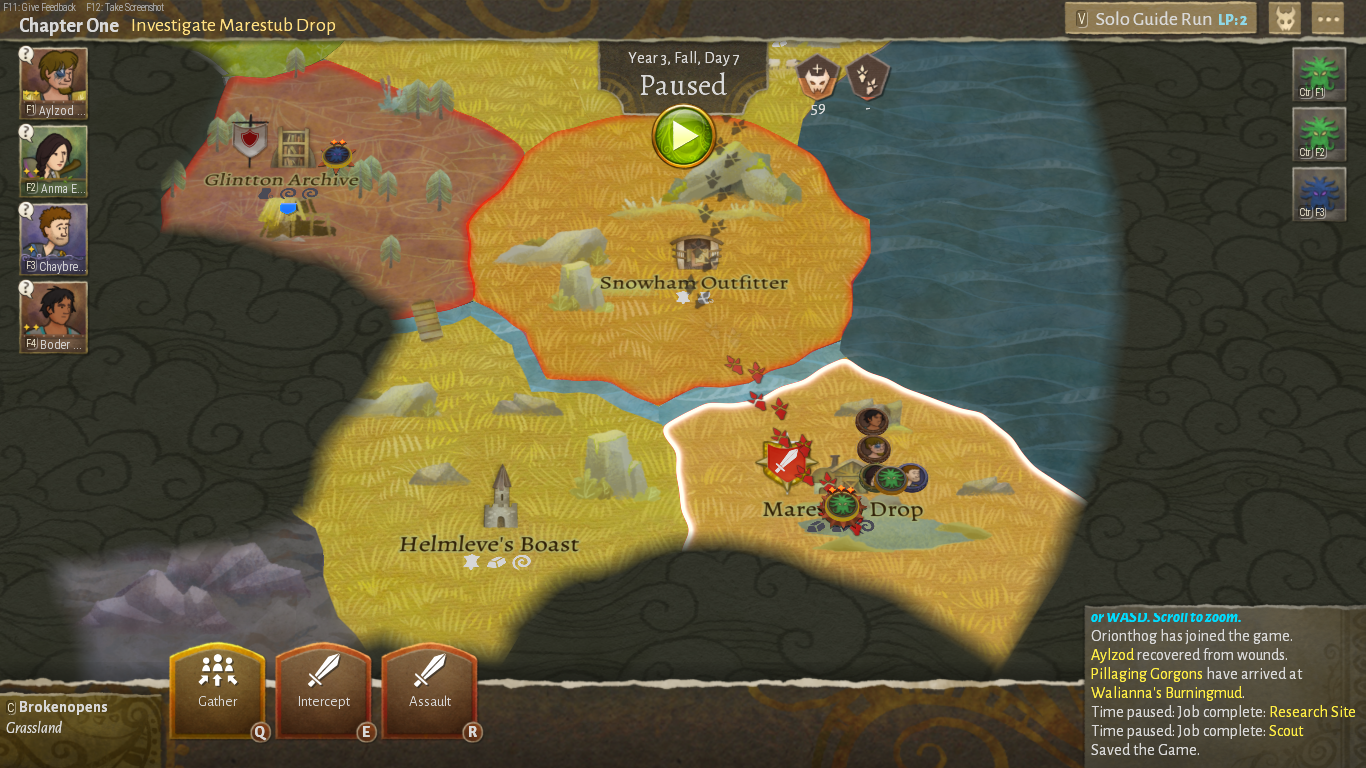 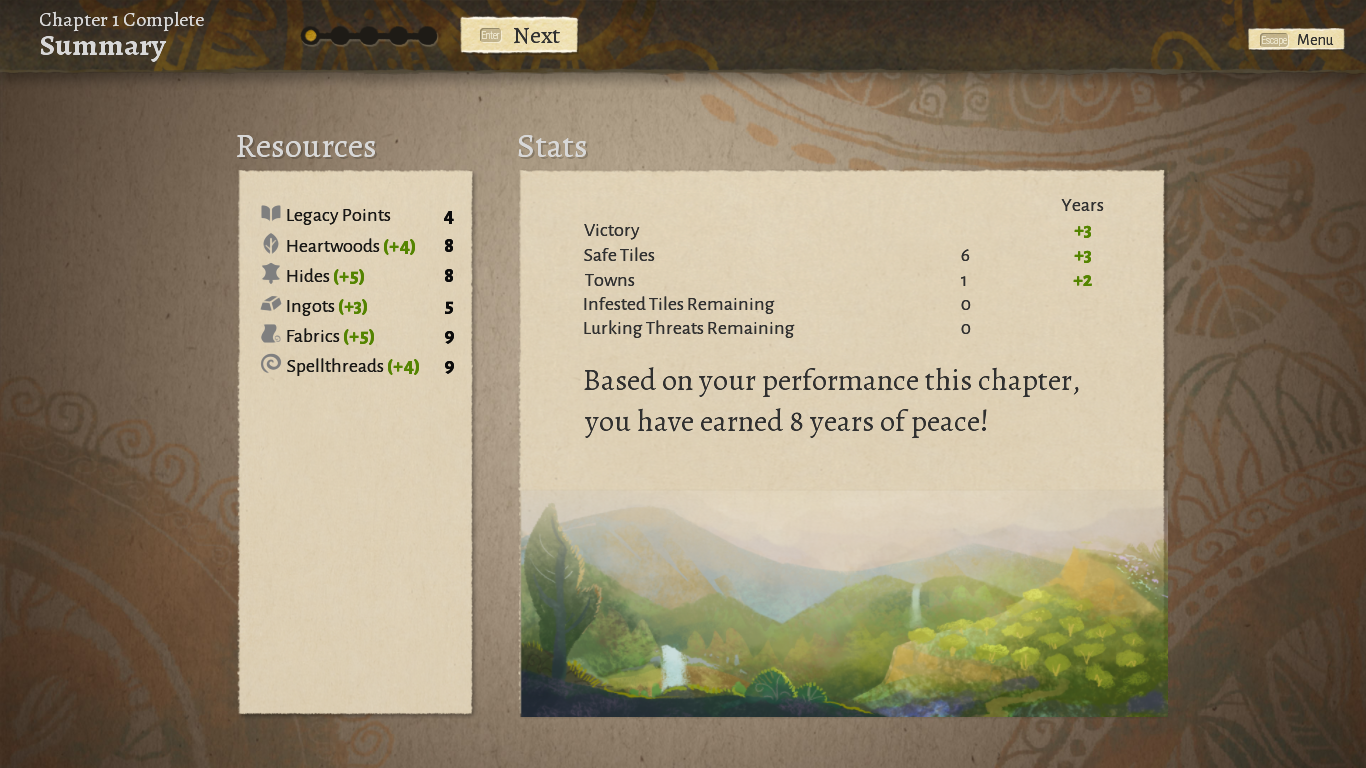 Starting it rightAs your, presumably, first campaign you play a tutorial and you can pick the weapon your chars will initially have. For the Warrior you could pick the Pitchfork (as it's easily recyclable for a spear) or the Pickaxe (as it's easily recyclable for an axe because of Armor Shred), but the pan is fine too. For the Mystic I'm always recommending the Staff because I don't believe in the Wand-Melee-Mage thing.

So, after your first dungeon, you'll be wanting to let your Hunter scout the map alone while your Mystic works researching the site and that's a good opportunity to use your Warrior to train a Recruit. I like going for a second Warrior because in the early game as you lack proper firepower and armor, having your Warriors defending your ranged units makes sense. But if you want to have an extra Hunter or even a Mystic, I think it's fine for this campaign.

Another viable strat is to use the Mystic/Warrior to scout solo another uninfested (does that word exists?) tile instead of researching the dungeon we've just cleared. I'm going to do that in this run because I got the absolute worst Chapter 1 map in my runs so far.

I'm going to need a bridge to cross to the Chapter 1 Boss. That takes precious time from us so we might not be able to complete the Chapter before the first Incursion. Usually you can just trample through this Chapter without having to face Incursions, building bridges or Preparing Defenses. Not our case here.

Just scouting 3 tiles is sufficient to know almost 100% of where and what we'll be facing. Here I got 4 because I didn't research Quana Folly. Plus, our station is in the middle of nowhere, we have enemies disposed such as we don't have an efficient way to move clearing the map, if the Incursion comes from the other side of the river, we can't know if we should Prepare Defenses on the Glintton Archives or on the Grasslands Station and we can't cross directly from Lylalia Dam to Noonmaze Watermill.

So now it's a good time to make some important decisions because:

At the end of the Chapter you get a lvl 1 Defense on the secured tiles and can craft Gear;

You want to spend as little time as possible letting the Gorgons buy cards and making Incursions while you don't have proper Abilities or Gear. (Actually you kind of never want that but here you should focus on getting your party stronger fast and without casualties);

They're drawing cards very soon. So we want to clear at least a tile to earn LP and be able to cancel some cards;

In the example I opted to start clearing the Dam because as my main enemies are the Gorgons, we'll be focusing on cancelling their cards instead of the Drauven's (Lizard-folk). That means now we'll have an opportunity to face the weakest Drauven we'll ever find. Also, that tile is not infested, which yields Strength 4 for them and 4 < 5. Usually you can clear 2 tiles but I got only 1 because I'm 2 days off. Not a big deal.

As we're lacking 200IQ options, I just cleared all the enemies, without taking more than 3 damage, we had scouted. If you're having problems in those first combats, you should review your tactics because you can even go through some of those without letting your enemies hit the party. I won't discuss about in-combat tactics because this is a Campaign Guide. Ok, now we have some LP, can build a bridge, the station and maybe finish the Chapter before the first Incursion.

Okay, we've got problemsI should've built the bridge on the outpost tile because that'd saved me 1 travel plus we'd have an easy access from the outpost to the unscouted tile and maybe didn't even build the outpost because the Incursion will ravage it so we'll have to repair it. But it's improbable we can go straight from the last Gorgons to the Chapter 1 boss without stopping to heal. So the Incursion would've started anyway? So should we've prepared defenses? And where? Well, it's easy to be an engineer of a finished building. All that's left now is to face this:

75 days to reach the Outpost. 49 to the Archives. My decision was to build a Tier 2 Defense because it looks like it will be a good spot in Chapter 2 when we reveal more map and to Assault those Gorgons.

27 days to reach the Archives and a lot to reach the Outpost. I decided to take my time and Research an item even though it'd take 28 days because my Tier 2 Defense should be able to keep the Gorgons busy until we can reach the Boss. And so we did it:

Now we finished the Chapter 1 the Incursion just vanishes and doesn't decrease our years of peace nor takes out resources we'd get.

Just be wary of one detail on this boss: ranged units can shoot through map gaps like so:

For this Campaign, whenever there's an opportunity, I'd take out Gorgon cards in the following priority:

Damage: because damage kills your heros. So more damage = more chances to be unfairly killed;

+40%HP: because killing them fast is the best way of not dying;

Armor: because killing them fast is the best way of not dying;

Corruption: it's just a pain in the ass when you get a kill and it explodes corruption on your tile, dealing 1 damage that bypasses armor/warding. Although leaving a trail of corruption isn't a big deal because you can still navigate without major problems;

New Gorgons: there isn't an enemy type that's particularly dangerous in this campaign imo but if you're scared of someone, I wouldn't judge if you cancelled a Gheist or a Bogmoor to delay them a little;

Almost all other cards should be ignored, as LP are a valuable resource and your main enemy are the Gorgons anyway. It would make sense stop twice Racoons, for example, if you weren't able to cancel a +2 damage. 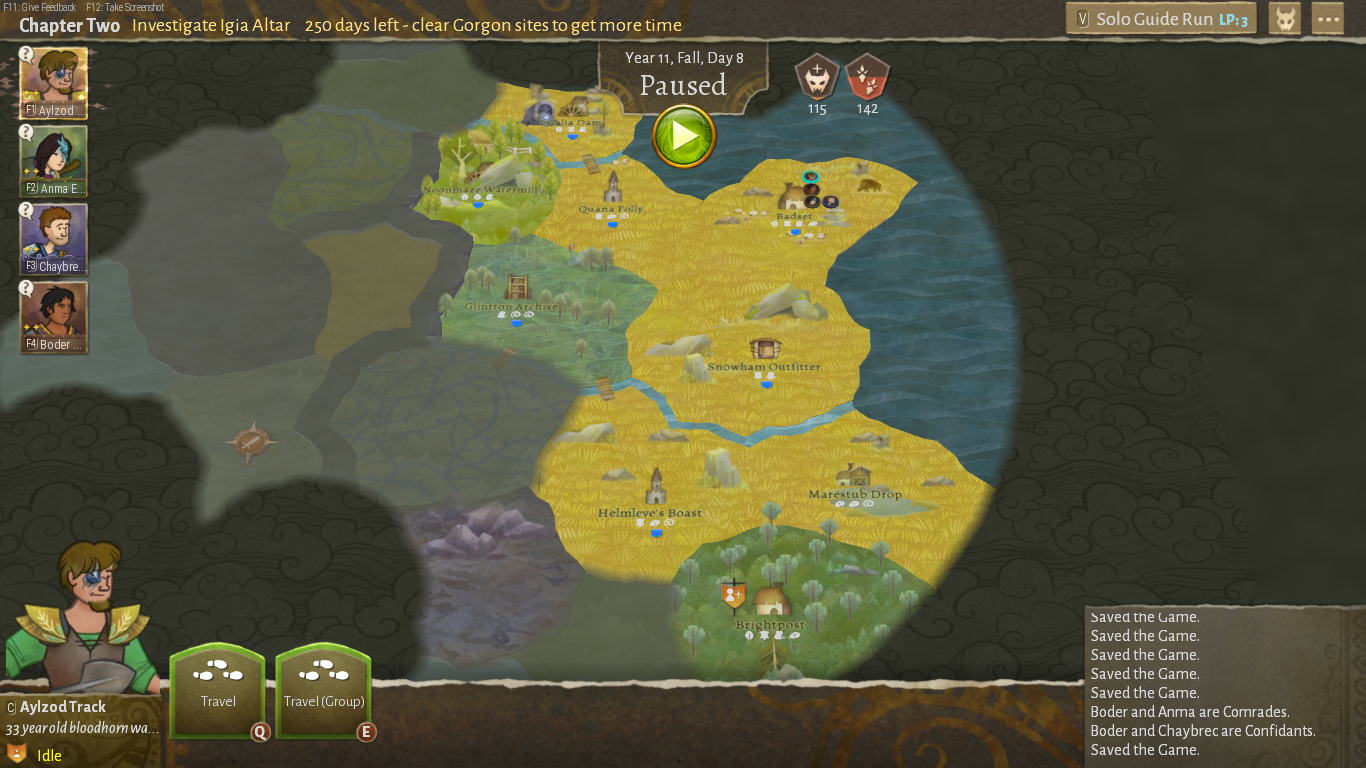 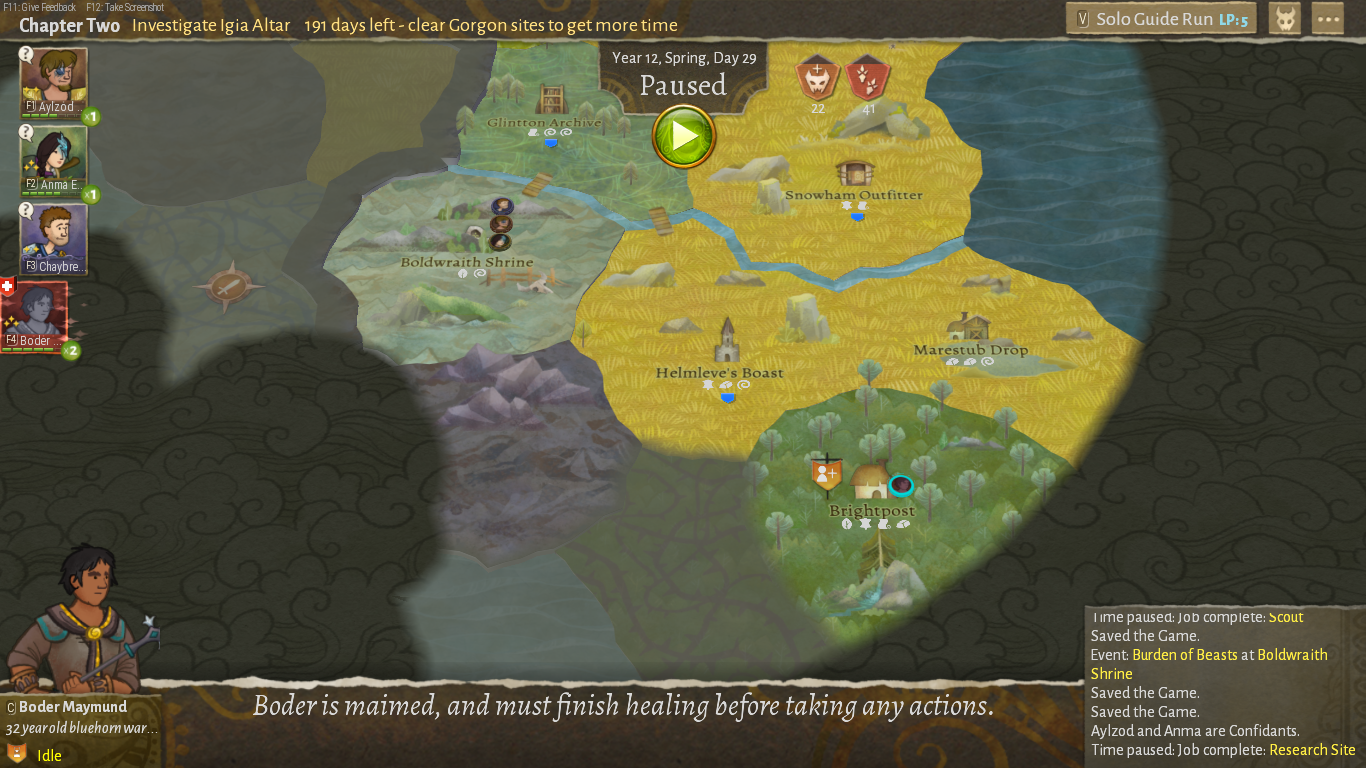 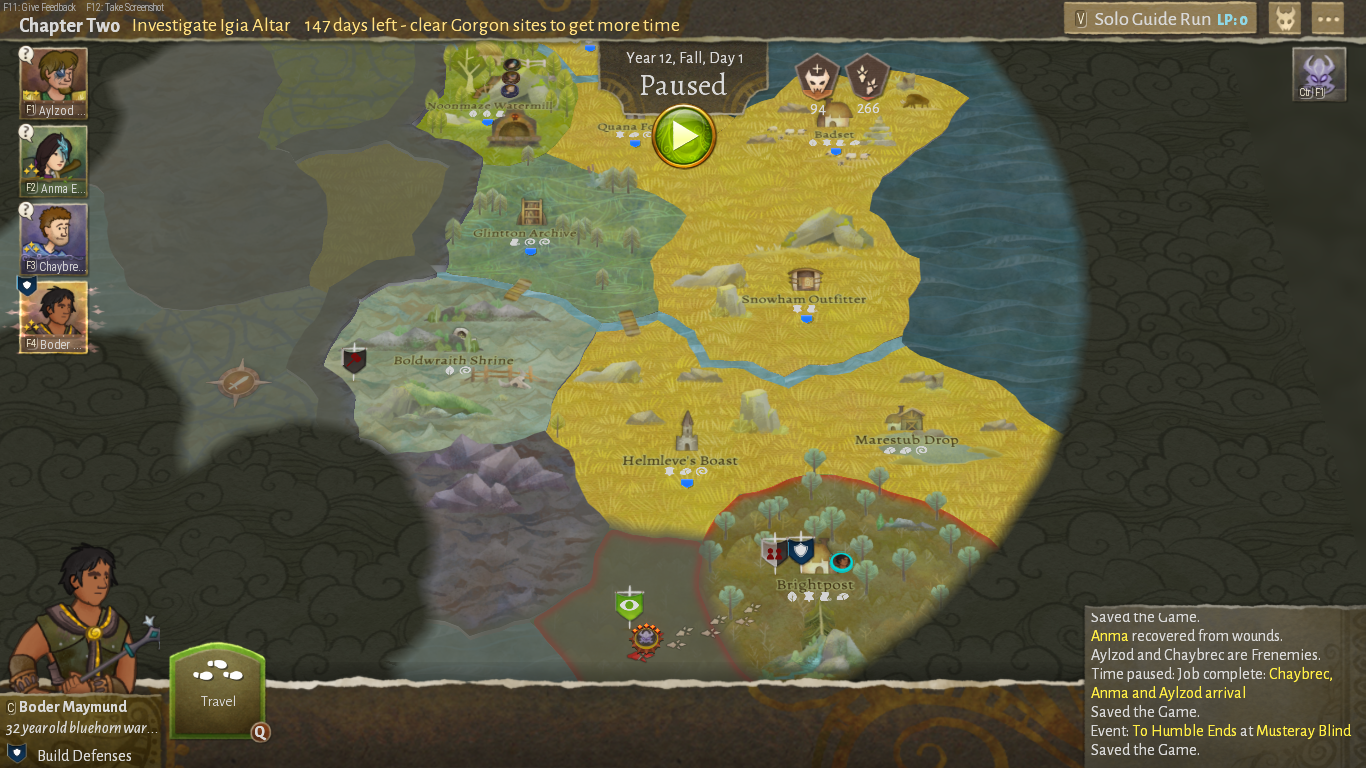 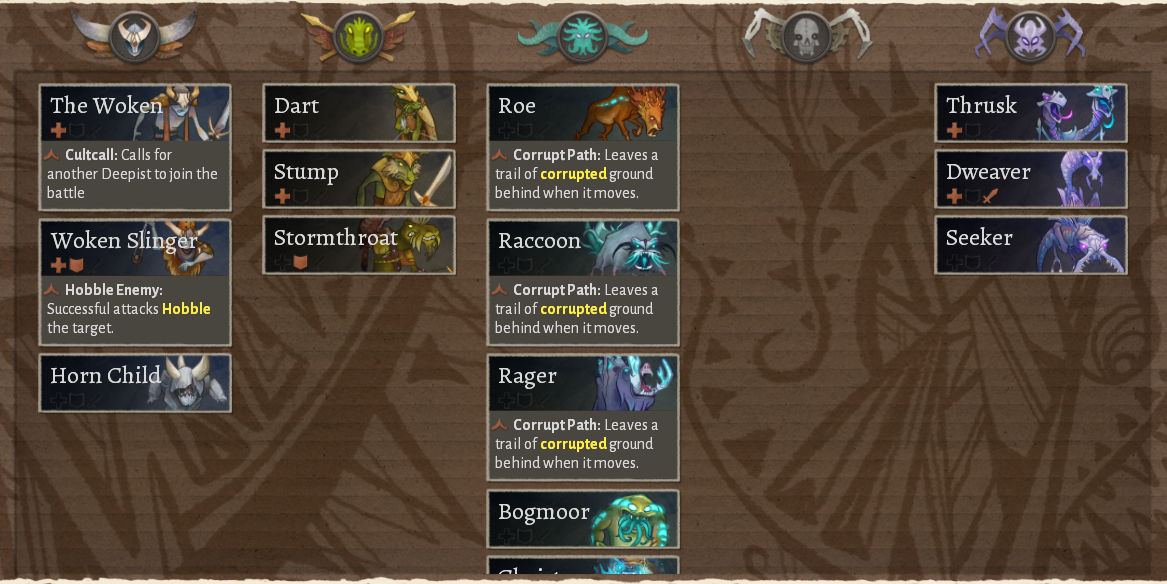 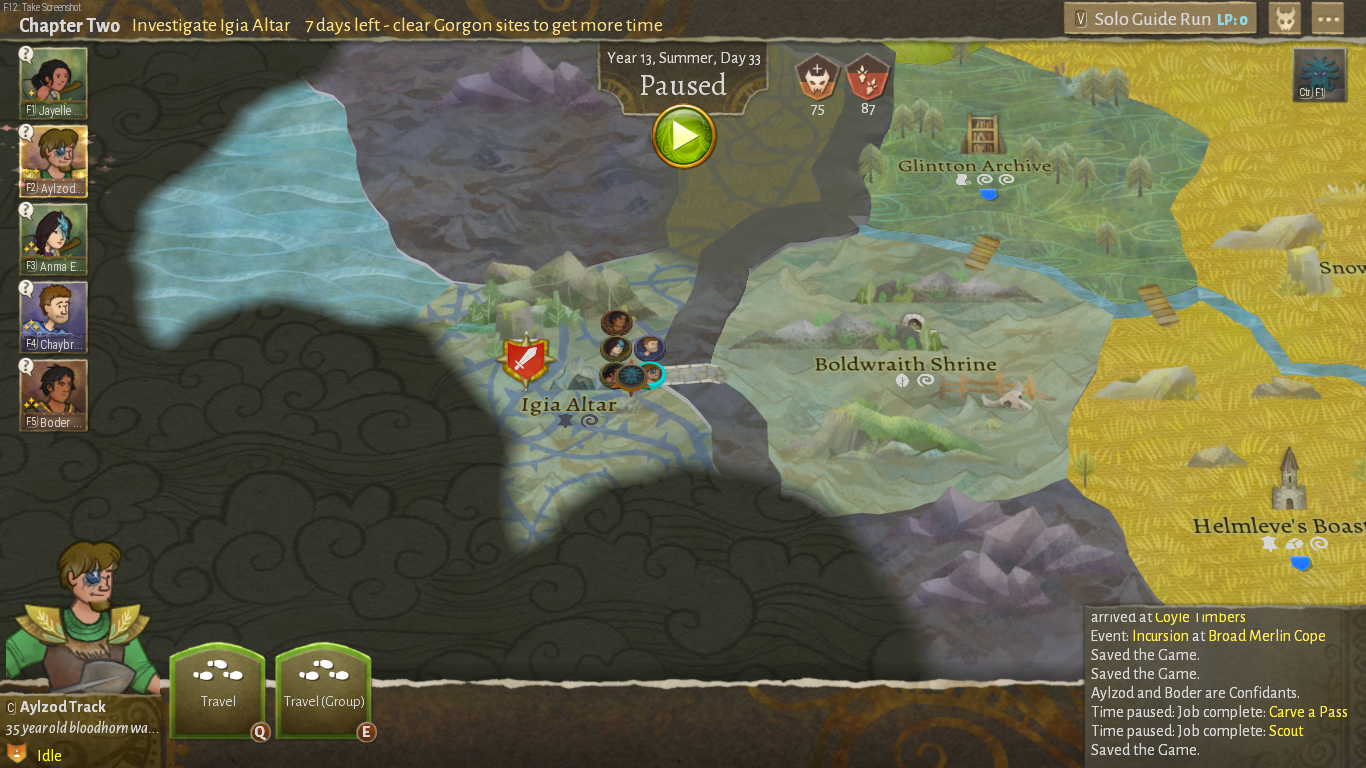 When upgrading your gear I suggest to prioritize Armor before Weapons because a good weapon serves no purpose in the hands of a dead hero.

So let's check out what awaits us. The map we got for the first Chapter was pretty bad so the probabilities should balance everything now, right?

Ugh, unlucko. There's an isolated tile in the farthest South to explore, another one on the North, if I choose to go North and follow to the Igia Altar (the Chapter objective) I won't be able to defend from a Incursion that might come from the tile adjacent to the Glintton Archive. Well, I guess I could just secure this Eastern side of the world, defend properly and advance, but note I have 250 days to do so and you get just a little more with each defeated Gorgon site.

Rushing the objective through the Mountain;

Try one big path to the objective, maybe letting some tiles unscouted;

Playing it slow and using all the 250 days;I feel confident on speedrunning this Chapter. So let's do it.

Boder got maimed. Unlucko. Oh well, I had a Roe, a Racoon and a Rager surrounding Aylzod then they just suddenly turned away and mobbed poor Boder who was 5 tiles away. That doesn't changes my plans too much. How about scouting that isolated tile on South? Maybe we'll stop by and recruit someone?

Alright, I just had an opportunity on the other side of the map, the Incursion is just between that tile in the South (btw, Thrixl??? wtf), I made a bad decision to hire a Recruit before the card draw on purpose because the difference would be cancelling 1 card (and wasn't punished). So my plan of speedrunning is now turning into the midrange one. You can say I'm doing whatever and all the planning and stuff I explained in this guide is dying. I say it's a 200 IQ move because once you pick the fastest strat you can only be forced to go slower, while if you're going slow, you can only get slower because you can't go back in time.

No, seriously now. We have another important decision to make

Decision timeThat Thrixl Incursion could look like a meme but I guarantee it isn't. It has 14 Strength and I have time only to build a Tier 1 Defense. My party can gather over there to defend Brightpost just in time but is it worth it? Do we try to defend it with Boder and 6 other villagers? The whole party and 3 villagers? Train the recruit and ignore the Incursion to later repair Brightpost?

I think you could make a point for each of those decisions but I recommend doing the same we did on Chapter 1. Those Thrixl are still very weak. I'll give it a try on the defense but will gather the party to grant we don't get lots of useless farmers without Guardian, Ambush or anything else decent. Except Aylzod. Apparently he's god at carving passes and Warriors aren't that good anyway in Incursions because we try to focus our power and run away to get more Volley of Arrows.

Oof, that small decision to let Aulzod on the tunnel was really MVP. We managed to reach the Chapter's Boss with 7 days left. If we had sent him down there it's VERY probable we'd be late by just a few days. Obviously we can't scout the adjacent tiles to look for Gorgons to kill. In the end we're following the decision to go straight for the boss. AS PLANNED.

No tips for this boss. Just don't throw. 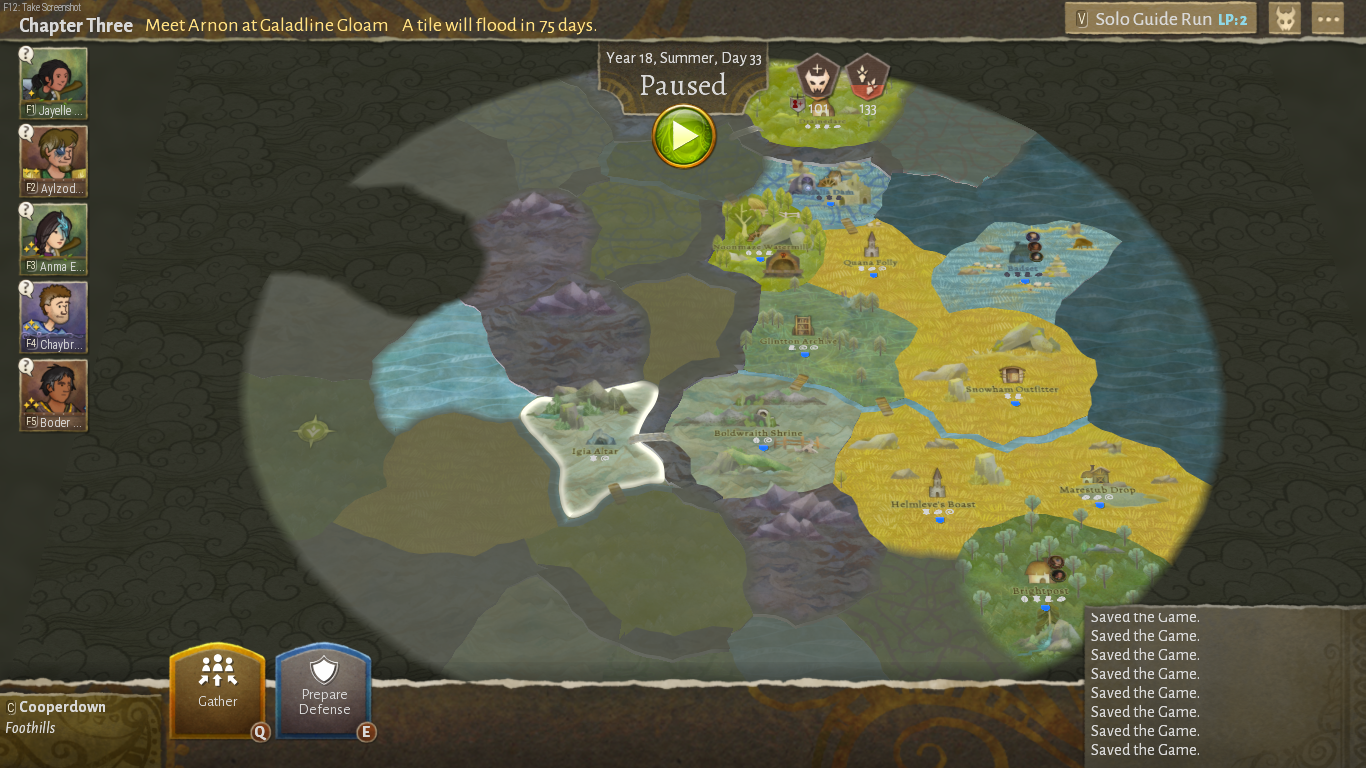 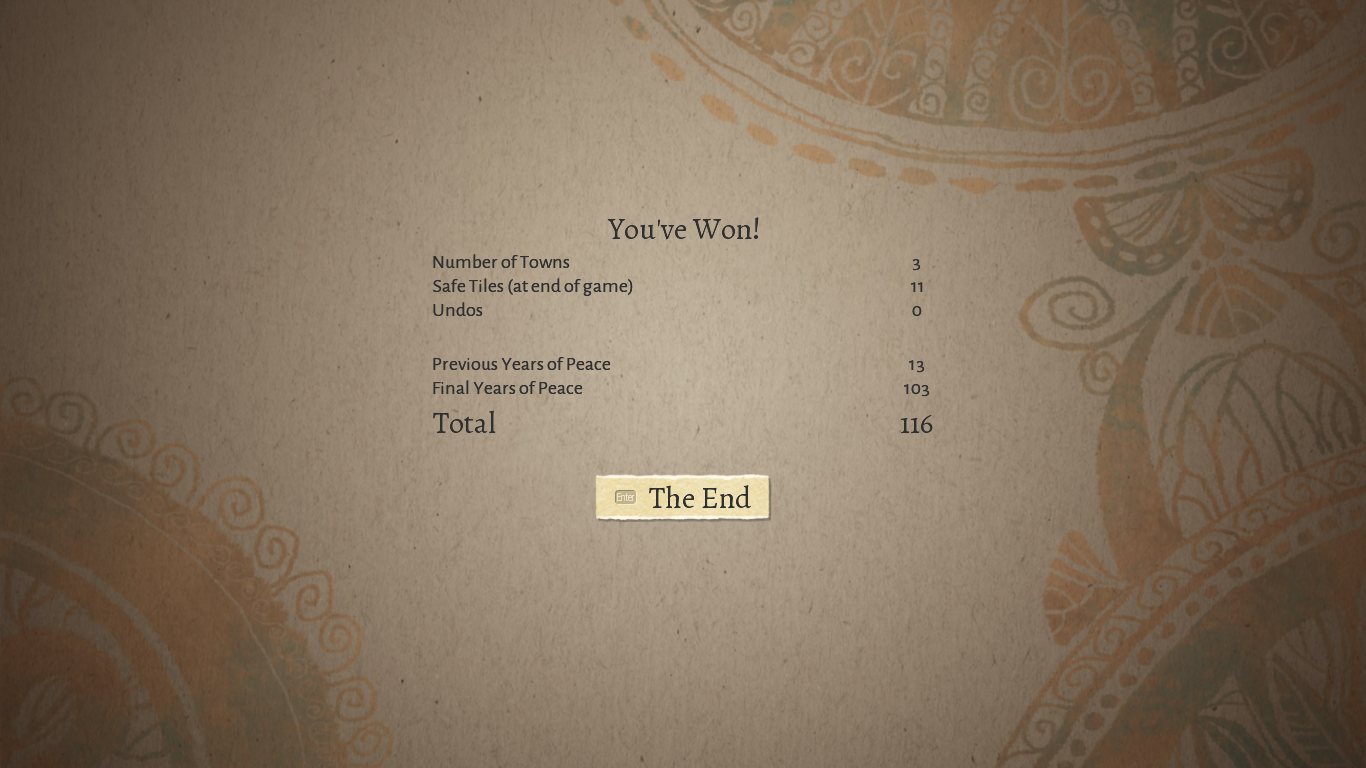 This is the last one. Materials are still useful because before the Final Boss you can craft gear. As my map is completely BS, there's the flood thing, this Campaign is pretty easy and I feel my party is prepared, I'm going to speedrun the main objective.

So... you kids like smart moves? Me too. That's why I didn't pay attention to an Opportunity event, misclicked one option and exchanged our poor boy Aylzod for 4 Thrixl cards. Yeah, now we're fighting the boss with one less hero. We should be fine, because he's a Warrior and it's there only to protect our ranged units. Ugh, no rollbacks on hardcore run, so all that's left is to just do it.

And I did it. Pretty easyly, btw. Just ignored Incursions, dug a tunnel, built a bridge, bulldozed some Gorgons with my 12 damage Discus, 5 Jumpjaws, Quelingmoss+ and my 2 attack-per-turn Warrior.