These are just my own tips to help you on your journey leveling up and to put some community recommendations in one spot (this is just my opinion you may have a different one, this is just to help).

Number of Players Levels Recommended Difficulty Avg. Time per mission Xp per hour (no modifiers) Notes Solo (1) 2-30 Uprising (2nd Diffculty) 20min 5,400xp Feel free to do the other difficulties but your success rate may vary Team (3-4) 2-30 Malice (3rd Diffculty) Varies 30min 5,300xp Do any diffculty you feel prepared to do, I will make a table with recommended levels for diffculties but its honestly your skill level and how hard you want to make it 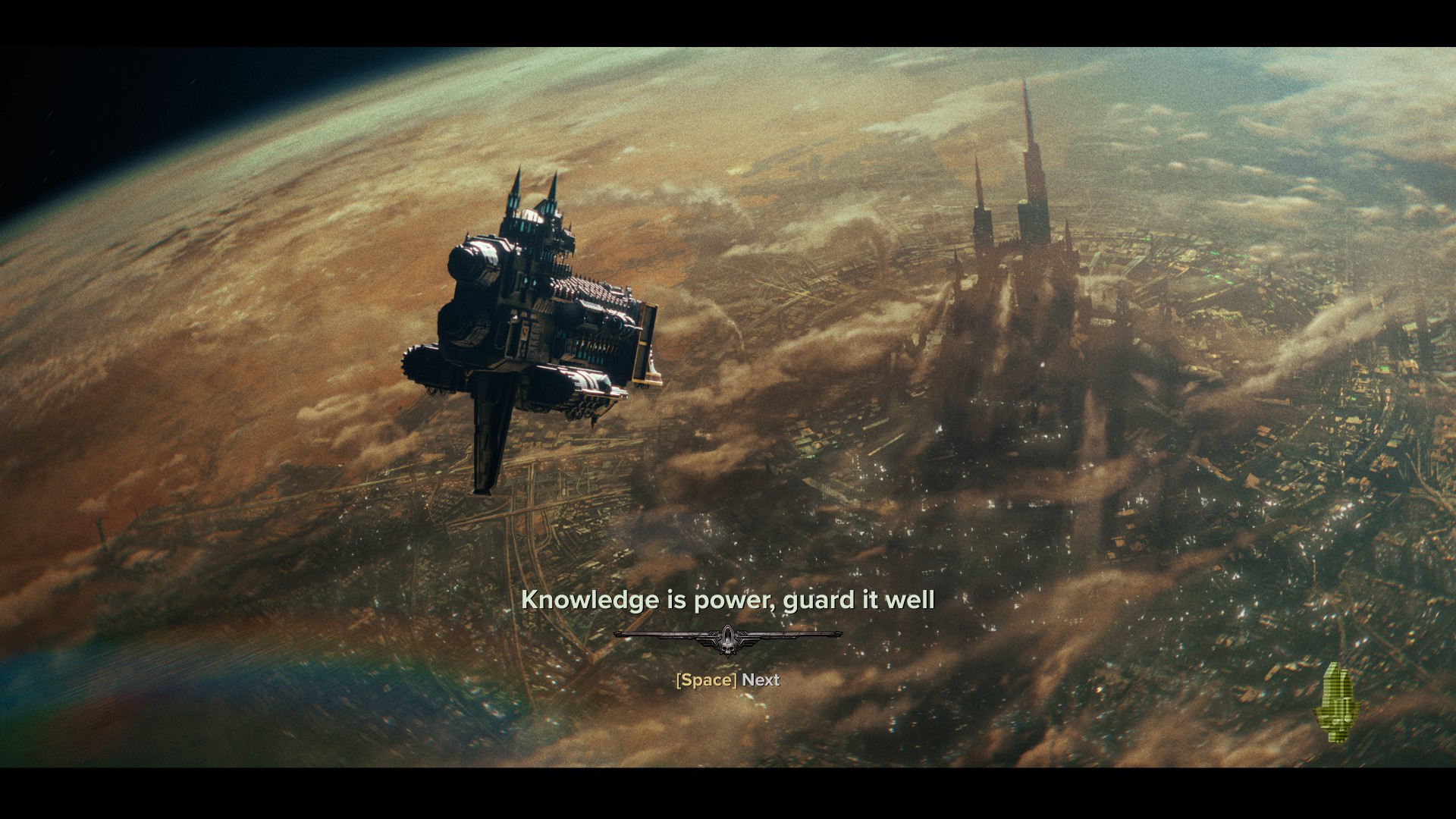 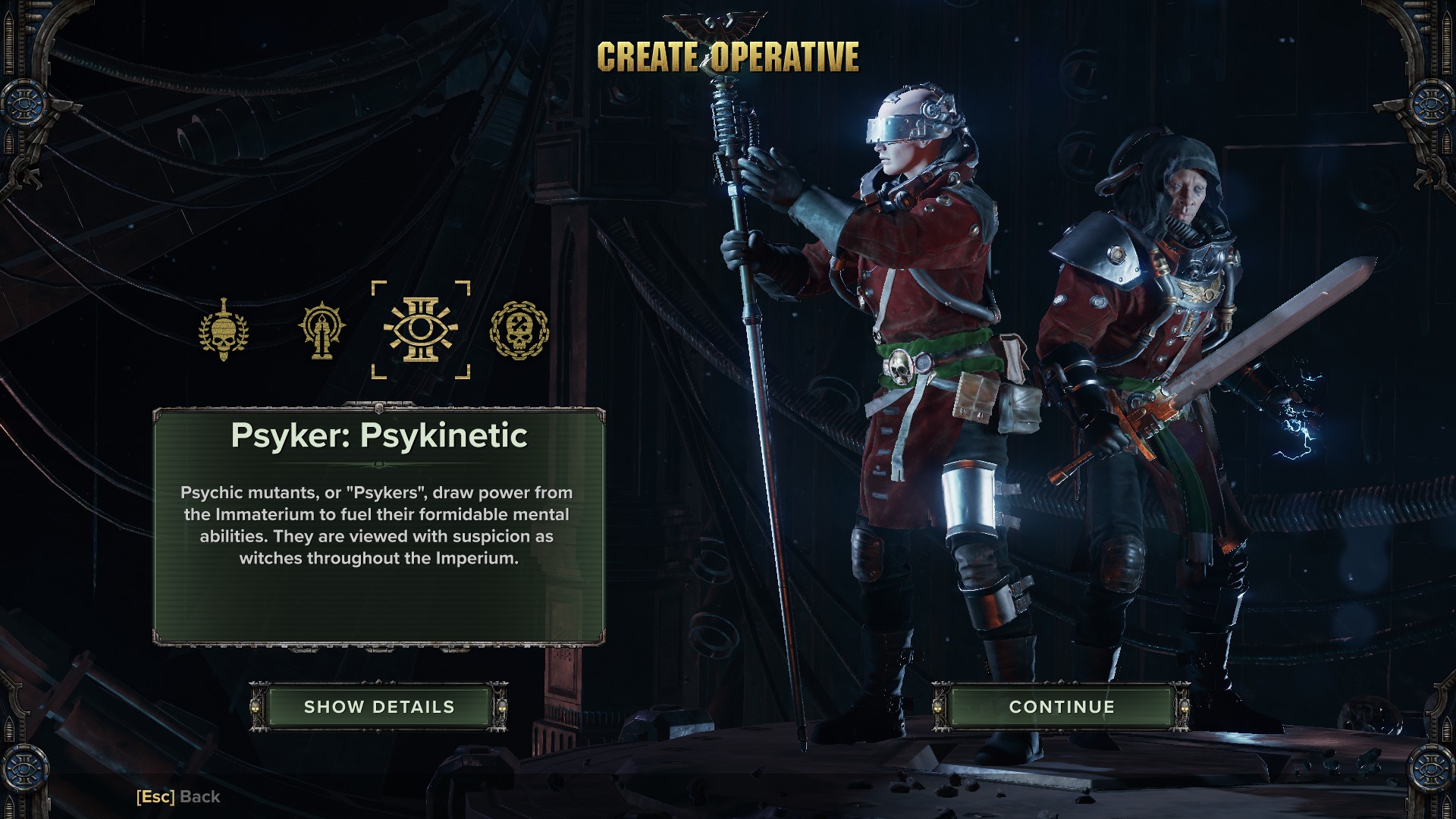 Target an enemy and charge the ability to deal high Damage

Warp Charges are retained for 25s. You can store up to 4 Warp Charges.

Replenish 5% Toughness for each 10% of Peril Quelled

Gain between 5% and 15% damage with Force Weapon attacks, based on your current

within 3 meters of target

Whenever you or an ally in Coherency kill an enemy, you have a 4% chance to gain a Warp

While below critical Peril, Blocking an attack causes you to gain Peril instead of losing Stamina

Your Movement Speed is not reduced while Quelling Peril

Can store up to 6 Warp Charges

While you have maximum Warp Charges, gaining a Warp Charge instead applies 4 Stacks of Soulblaze to a nearby enemy, prioritizing Elites Kinetic Flayer

All attacks have a 10% chance on hit to Brain Burst the target. This cannot occur while at critical Peril, and has cooldown of 15s

Psykinetic Wrath expends all Warp Charges, reducing coldown by 12.5% for each Warp

Psykinetic Wrath expends all Warp Charges and applies Stacks of Soulblaze to enemies hit based on number of charges expended. Enemies killed by Soulblaze effects have a 10% chance to grant a Warp Charge Kinetic Barage

ALL CREDIT to TakeItEes for data

DISCLAIMER This is ONLY the lowest level that the community has had a weapon appear in the shop so FAR. The shop (to an extent) is random and when you can buy a weapon is not the same level as when you can USE it! Your experience may be different (if it is please share!) In the future I may create a weapon guide with the level it appears and is usable.

Enter a ranged stance for 5s, equipping Ranged weapon and Designating nearby non-

Scavenger Hunt - You and allies in Coherency gain a small amount of Ammo wheneever any of you kill an Elite enemy.

Be Prepared - Increase Ammo reserve for all Ranged weapons by 40%

3. At Arm's Length - Replenish 5% Toughness/s while more than 8 meters from enemies

1. Sniper - Deal up to 25% increased damaged based on the distance between you and the target

2. Tactical Reload - +20% Reload Speed if you have Ammo in your weapon

2. Demolition Team - You and allies in Coherency have a 8% chance to gain a Grenade on enemy kill

3. Covering Fire - When you kill an enemy with a ranged attack, allies in melee range of the target replenish 4% Toughness

3. Camo Expert - While standing still, enemies are significantly less likely to target you 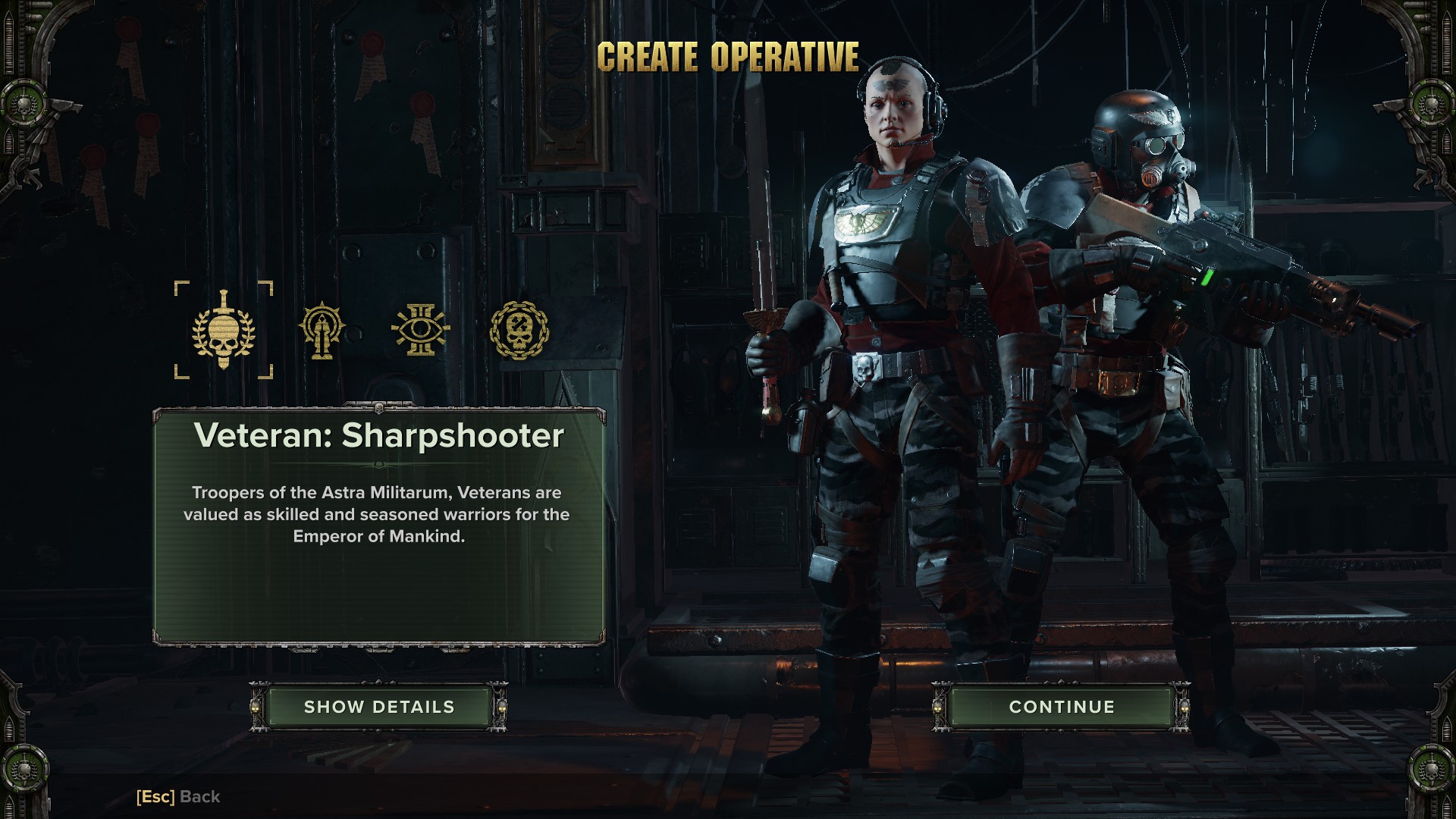 Big Box of Hurt - Throw a box of grenades with great stength and enthusiasm for a single target, high damage attack

2. Bombs Away! - Hitting a Carapace Armoured enemy with your Big Box of Hurt causes it to open, releasing grenades around the target

2. Lead the Charge - When you activate Bull Rush, allies in Coherency gain 25% Movement Speed for 4s

3. Bullfighter - +10% Bull Rush Cooldown when you or an ally in Coherency kills an Elite

1. Bloodthirst - +10% Damage Resist per Bleeding enemy in Melee range. Stacks up to 5 times

2. Hard as Nails - -25% Damage Taken for each ally currently Knocked Down or Incapacitated

1. Payback Time - When an enemy damages you, gain +20% damage against enemies of the same type for 5s

3. Raging Bull - +5% Damage on Melee hit for each enemy hit with initial attack

2. Unstoppable - Increases the distance you travel with Bull Rush by 100%, and you cannot be blocked by enemies except Monstrosities 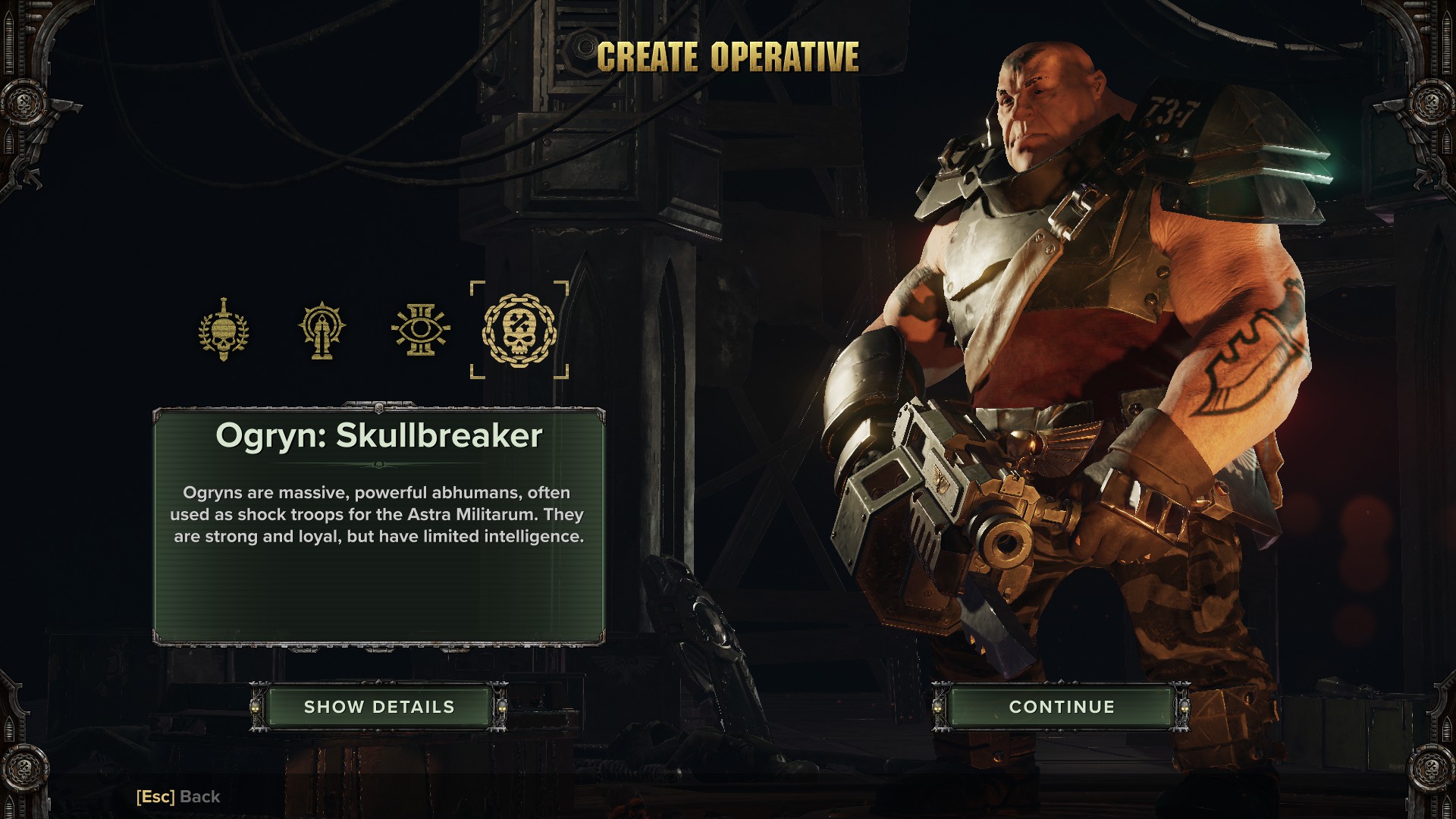 Chastise the Wicked - The Preacher dashes forward or towards a targeted enemy, replenishing all toughness, increasing Damage of next Melee hit by 25%, making it a guaranteed Crit

The Emperor's Will - +7% Toughness Damage reduction (Allies in Coherency)

Until Death - Every 90s, taking damage that would kill you, you instead gain Invulnerability for 5s

3. Enemies Within, Enemies Without - Replenish 5.0% Toughness per second while within 4 metres of any enemies

1. Holy Fervour - +20% Power to allies in Coherency for 5s. On gaining a Stack of Martyrdom

1. Holy Revenant - When Until Death ends, you gain Health based on the damage you dealt during Until Death. Melee damage dealt heals for twice the amount

2. Thy Wrath be Swift - You no longer get Stunned by Enemy Melee Attacks. When you take Damage, gain _30% Movement Speed for 2s

3. Faith Restores All - After taking damage you regain 25$ of the damage taken over 5s

1. Emperor's Executioner - Deal up to 25% increased ranged damage based on the proximity of the target

1. Invocation of Death - Melee Crits reduce cooldown of Chastise the Wicked by 1.5s

2. Fury of the Faithful - +20% Attack Speed for 5s on using Chastise the Wicked 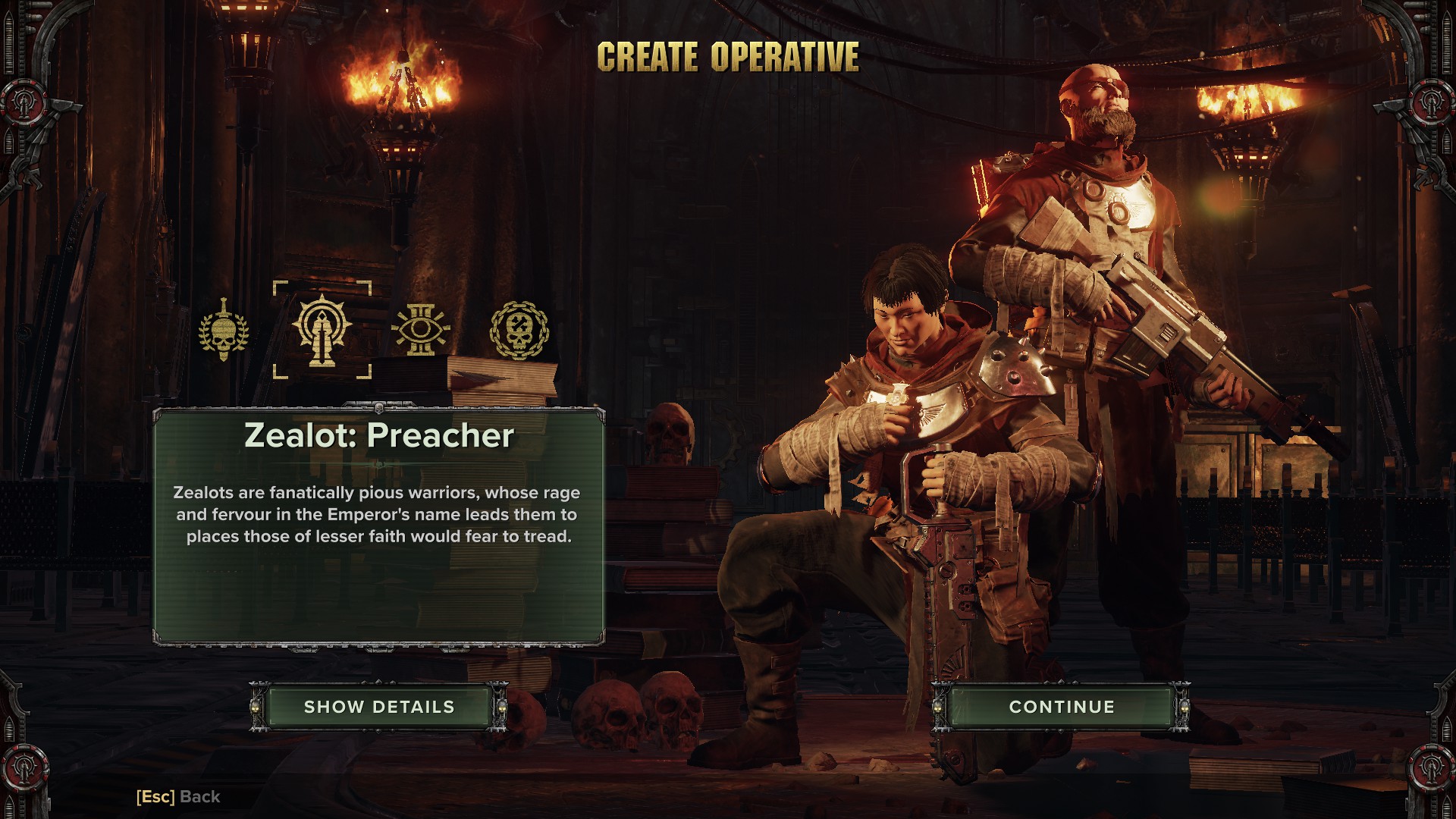 This guide is a WIP please be kind. This is a resource for everyone!

Please comment below if you want to be a contributor or if you have an unlock you would like to share all help is welcome! Thank you for your help! 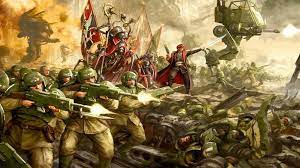 Thanks to Fatshark [https://www.playdarktide.com] for making such a great game.