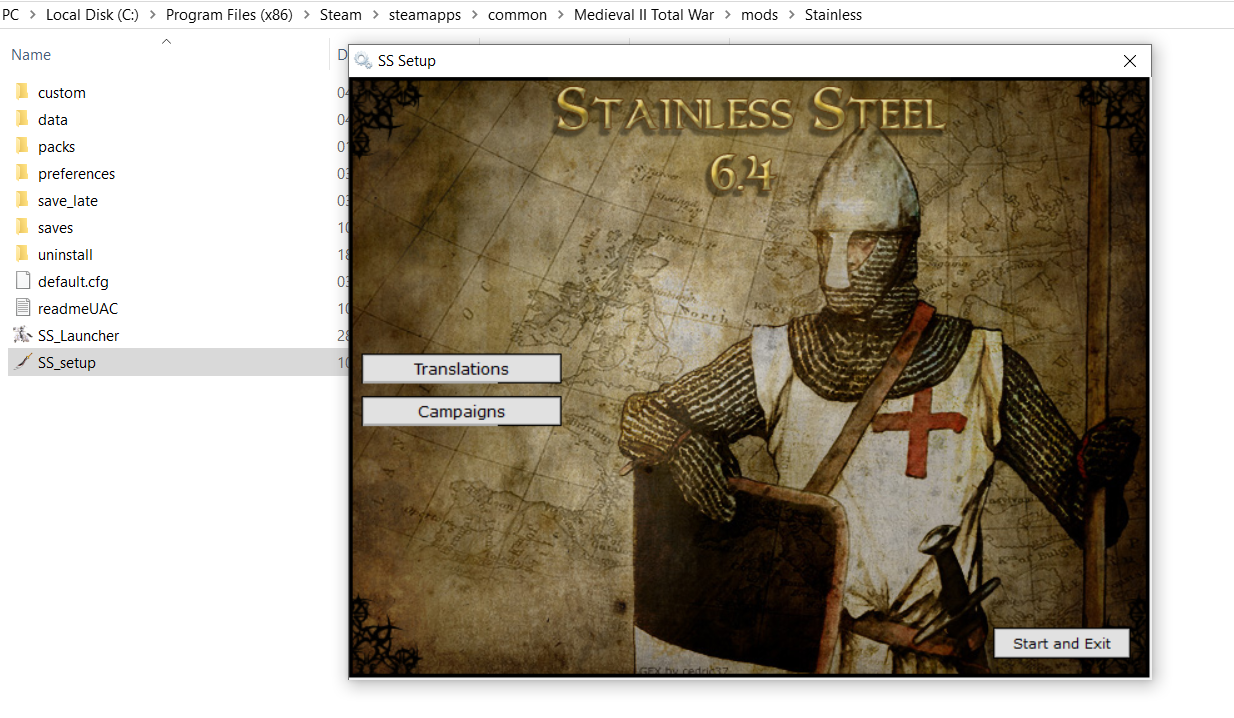 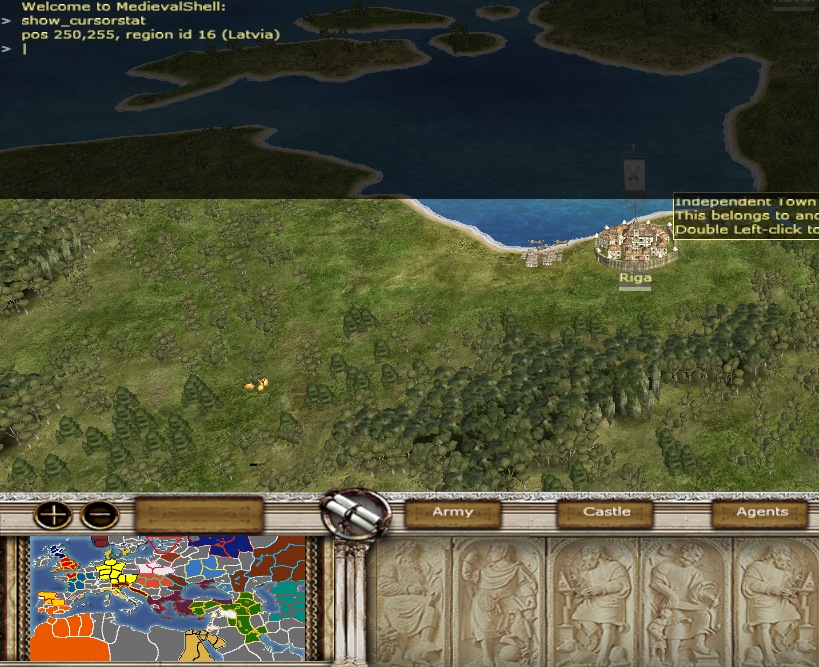 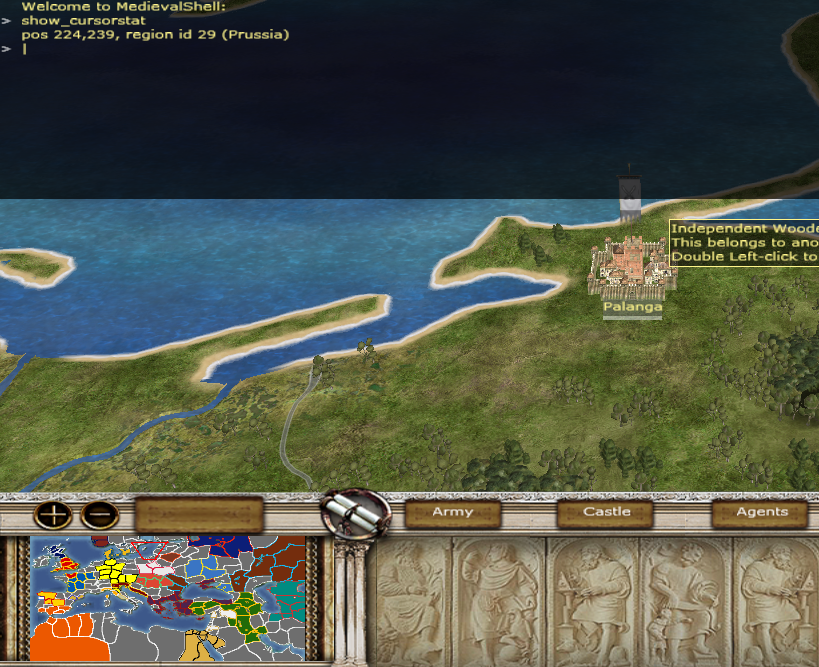 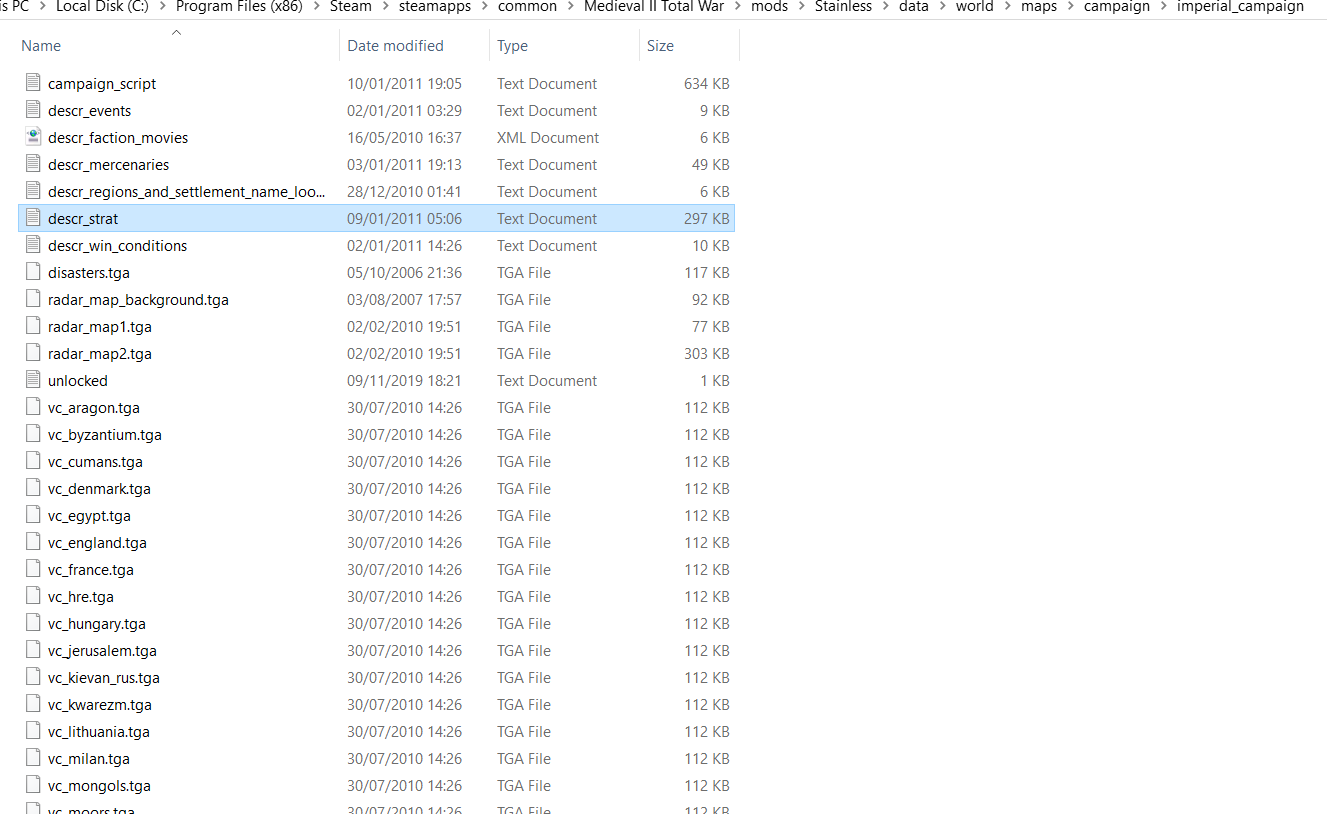 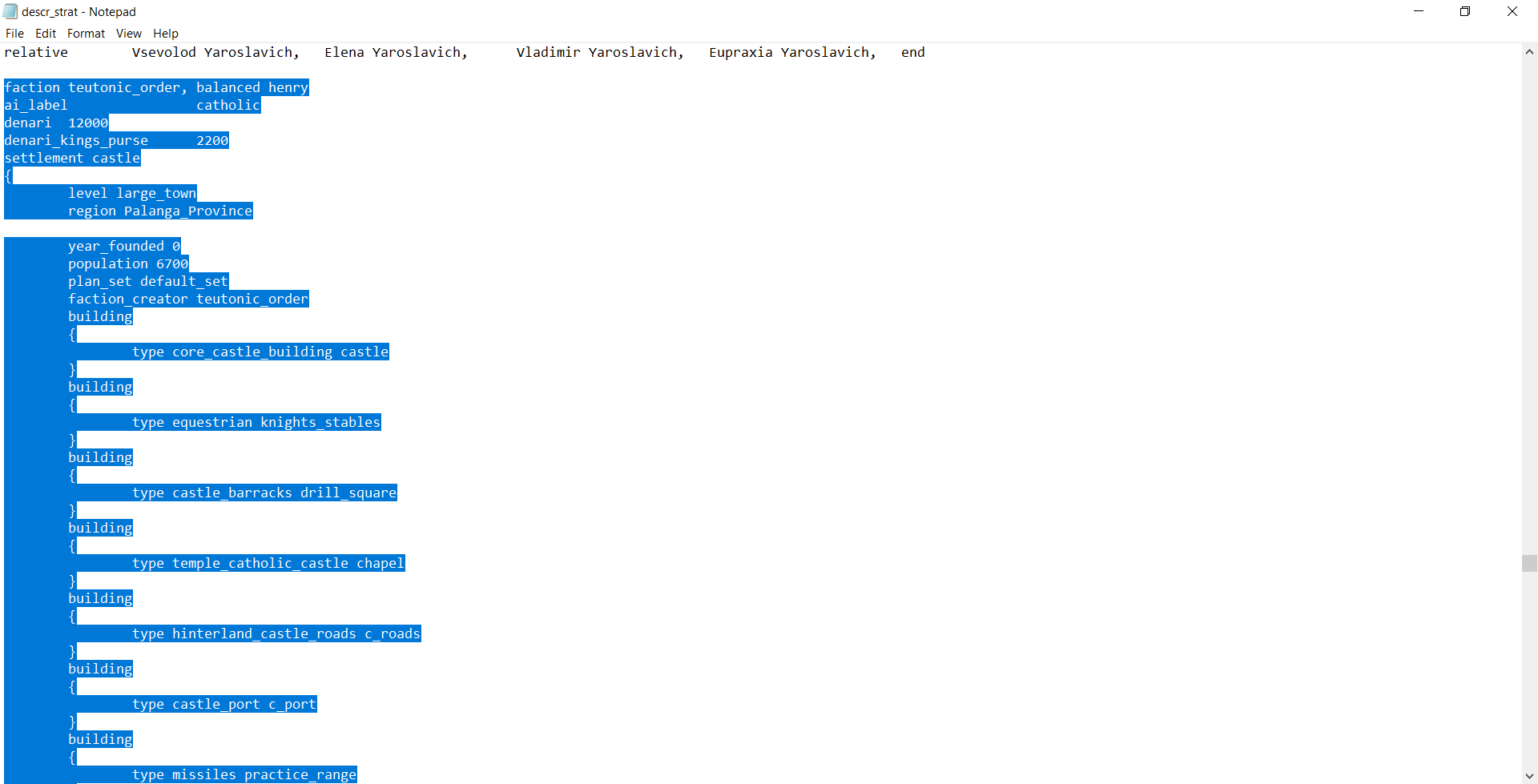 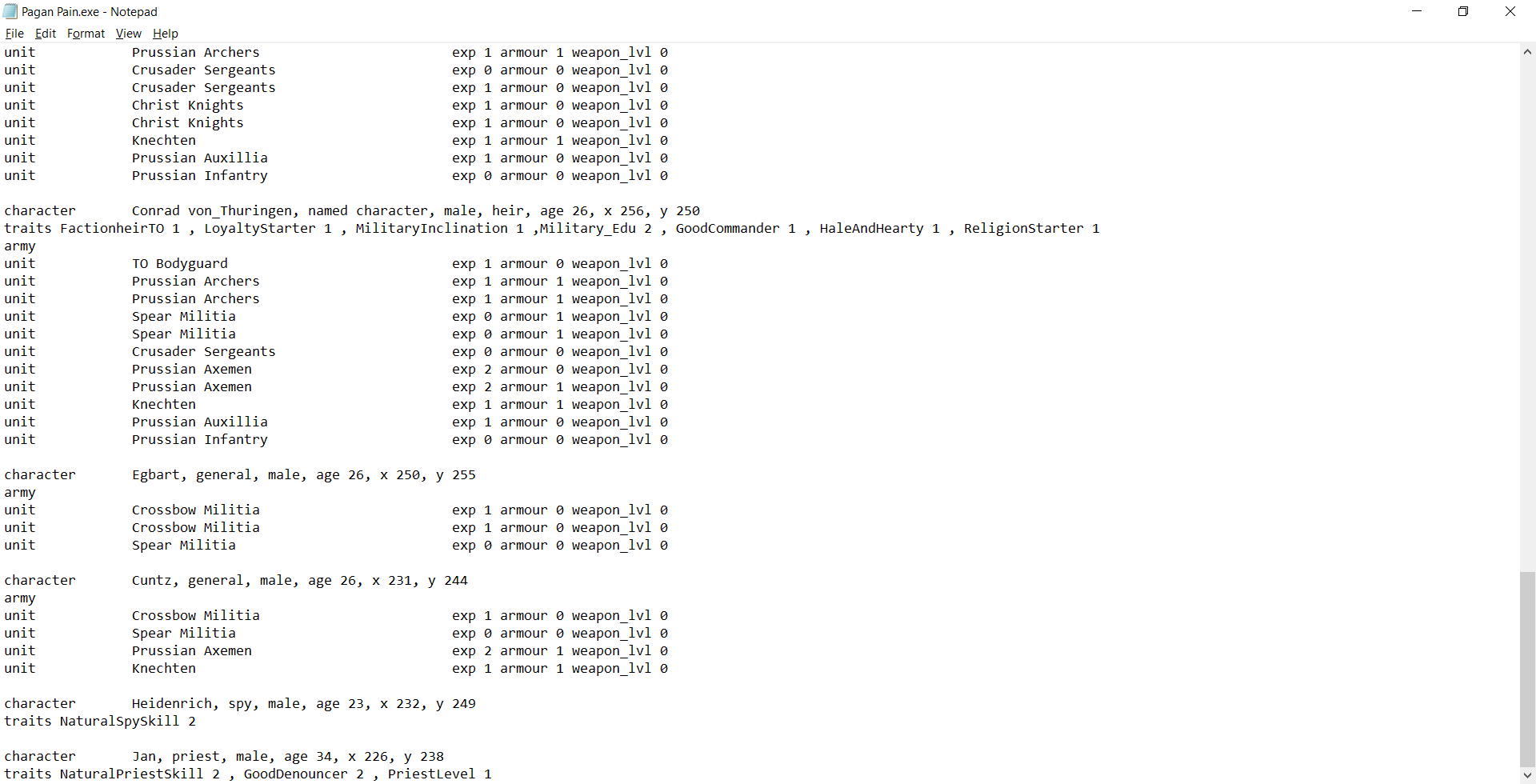 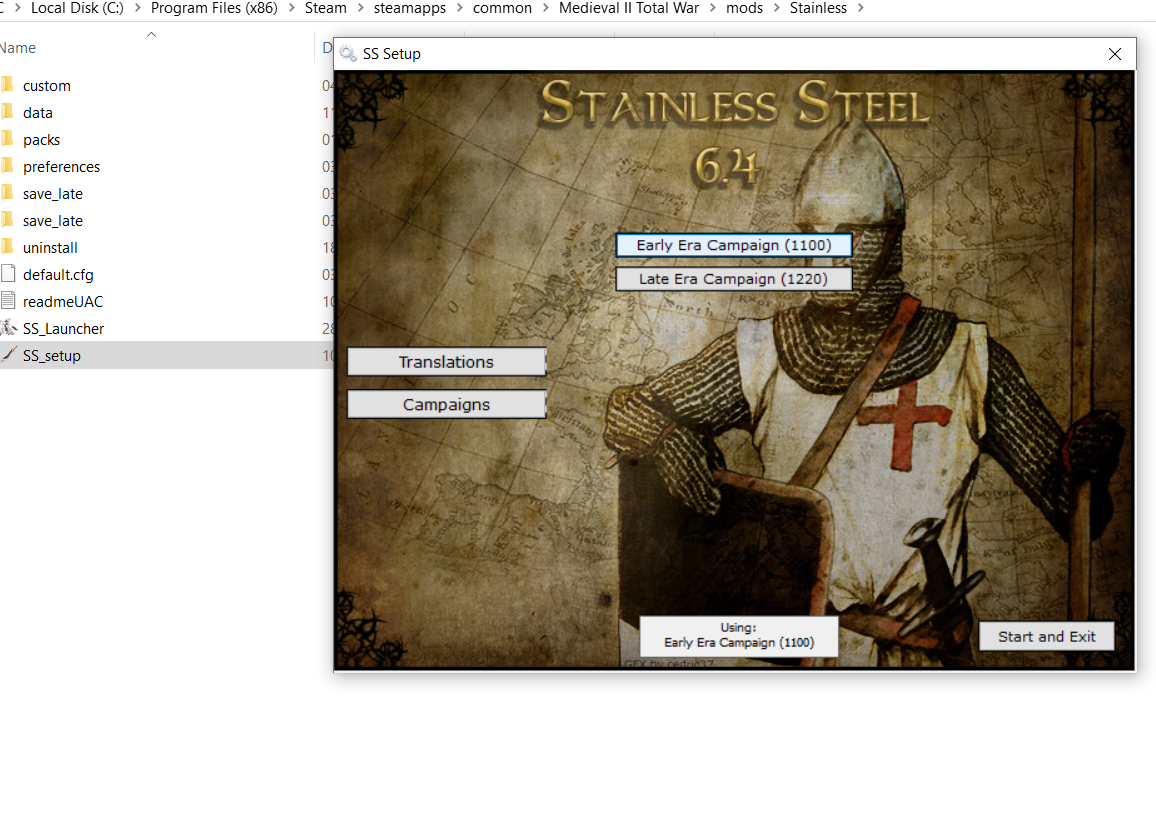 We will need to save a few things before we begin modding. Please keep in mind that at any time during this process if the game fails to launch and you feel you've made an irreparable error, you can simply boot up the SS launcher and change campaigns. This will give you a fresh start by defaulting all the files back to their original states.

So to start us off: Co-ordinates. Since I'm so nice I've found them for you (I accept cheques).

You will need these to place the TO armies in their settlements but, more importantly, to remove the rebel armies currently occupying those settlements in the early campaign descr_strat file. Just note them down for now.

[In case you want the TO in a different, even more ahistorical starting position, all you need to do is find the settlement you want in-game, hit ' to bring up the cheat menu, type 'show_cursorstat' with your mouse hovering over the settlement and then use those co-ordinates to delete the rebel (or faction) army there so your TO boys and girls and attack helicopters can move in without a care, as well as assign them the settlement in descr_strat which we'll get to]

Our second and most vital ingredient will be the TO themselves. Load up SS's late campaign through the launcher and then go into the Medieval II/mods/Stainless/data/world/maps/campaign/imperial_campaign folder and find descr_strat. You can use CRTL+F to quicksearch keywords.

Scroll through descr_strat until you find the Teutonic Order. Copy-paste all of it and save it in a separate notepad file.

Once you have the TO themselves saved, you can go back and load up the SS early campaign through the launcher. 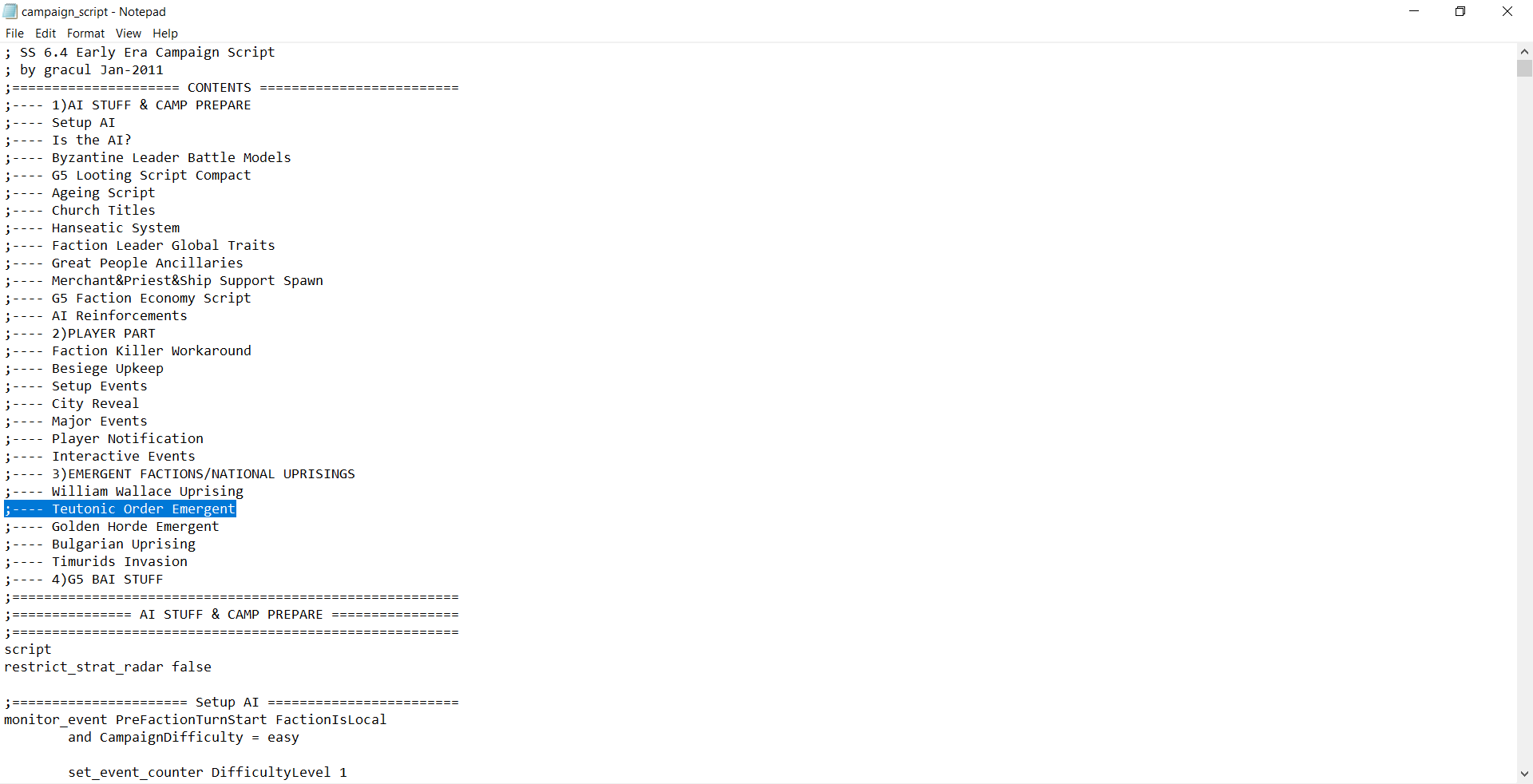 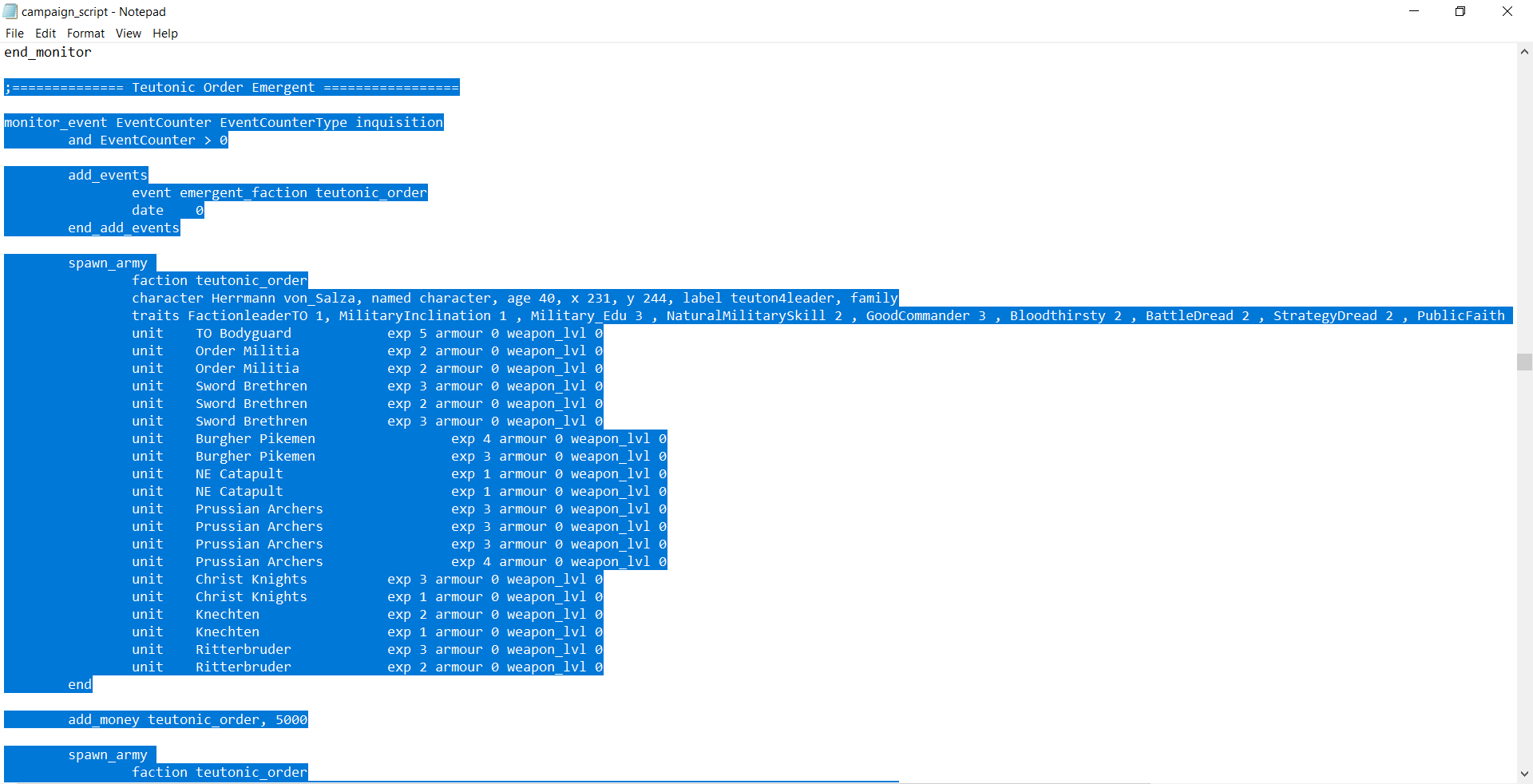 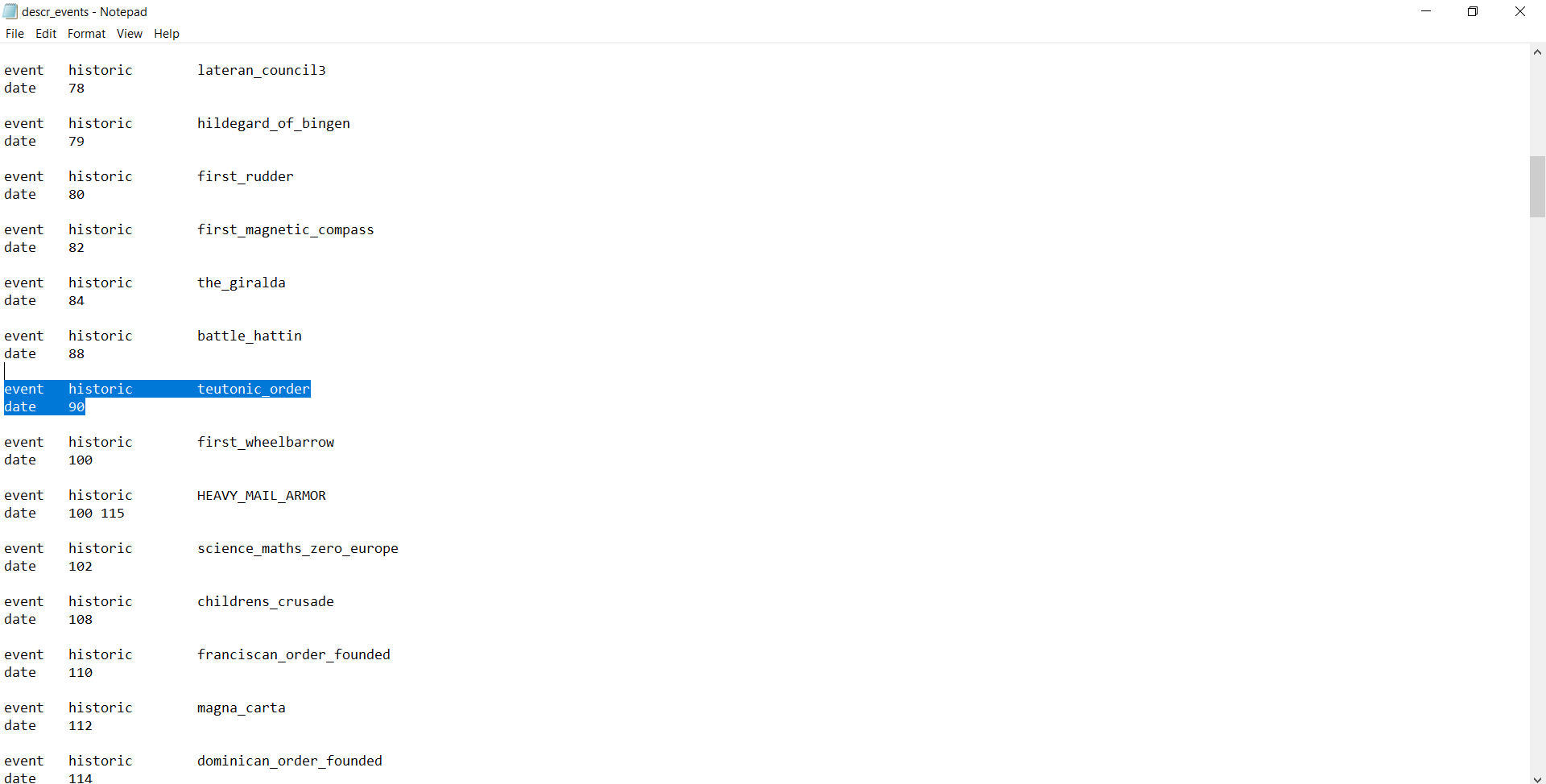 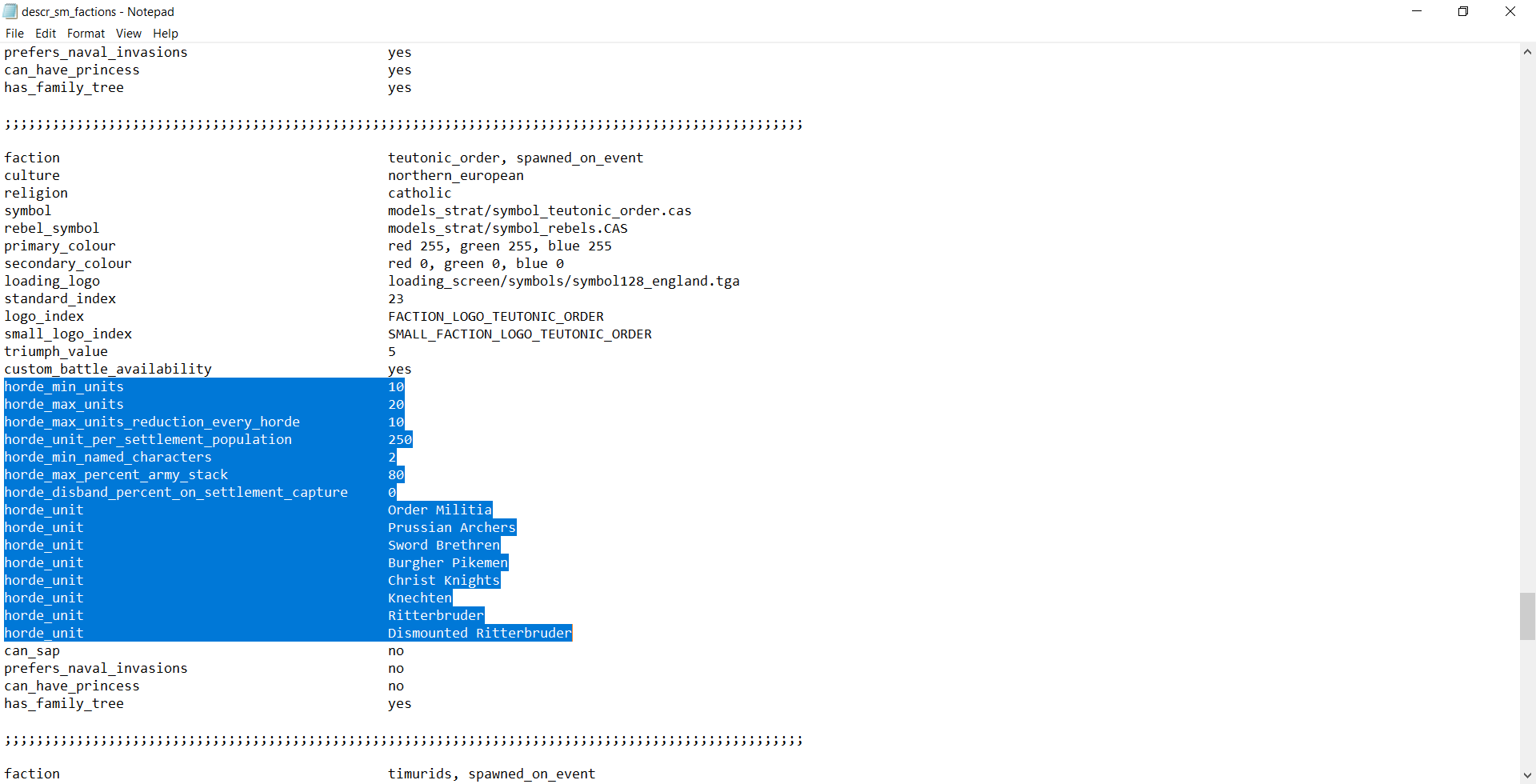 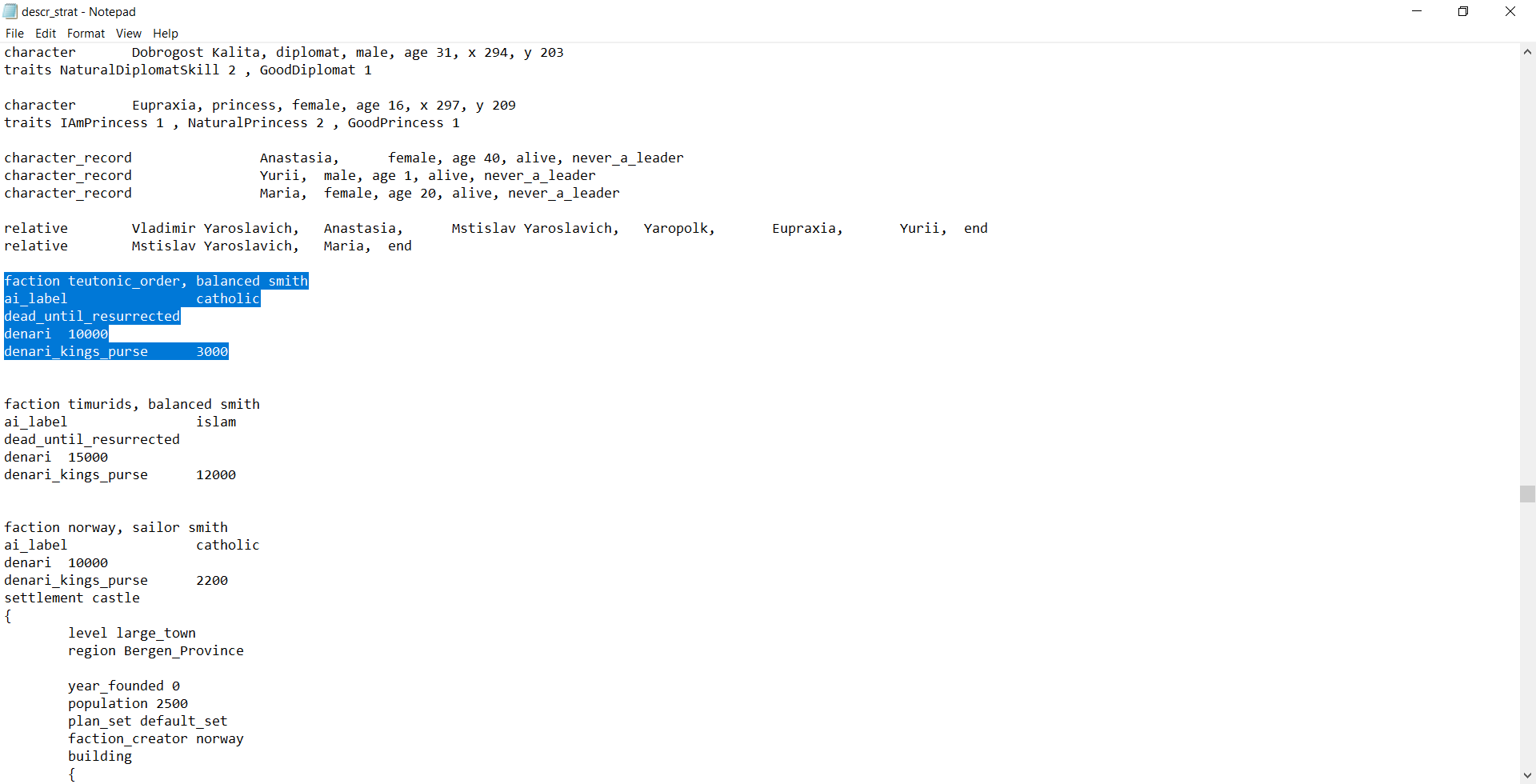 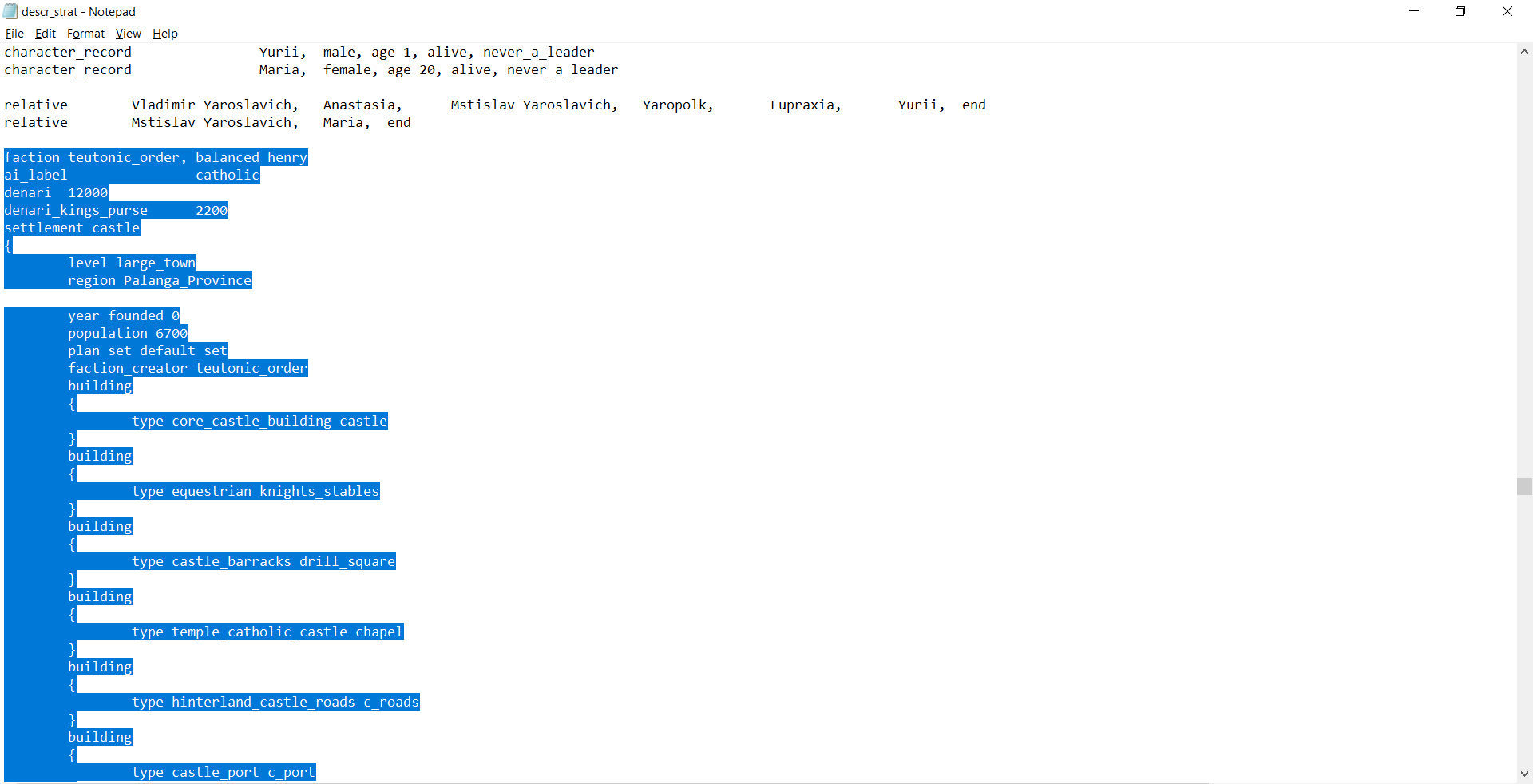 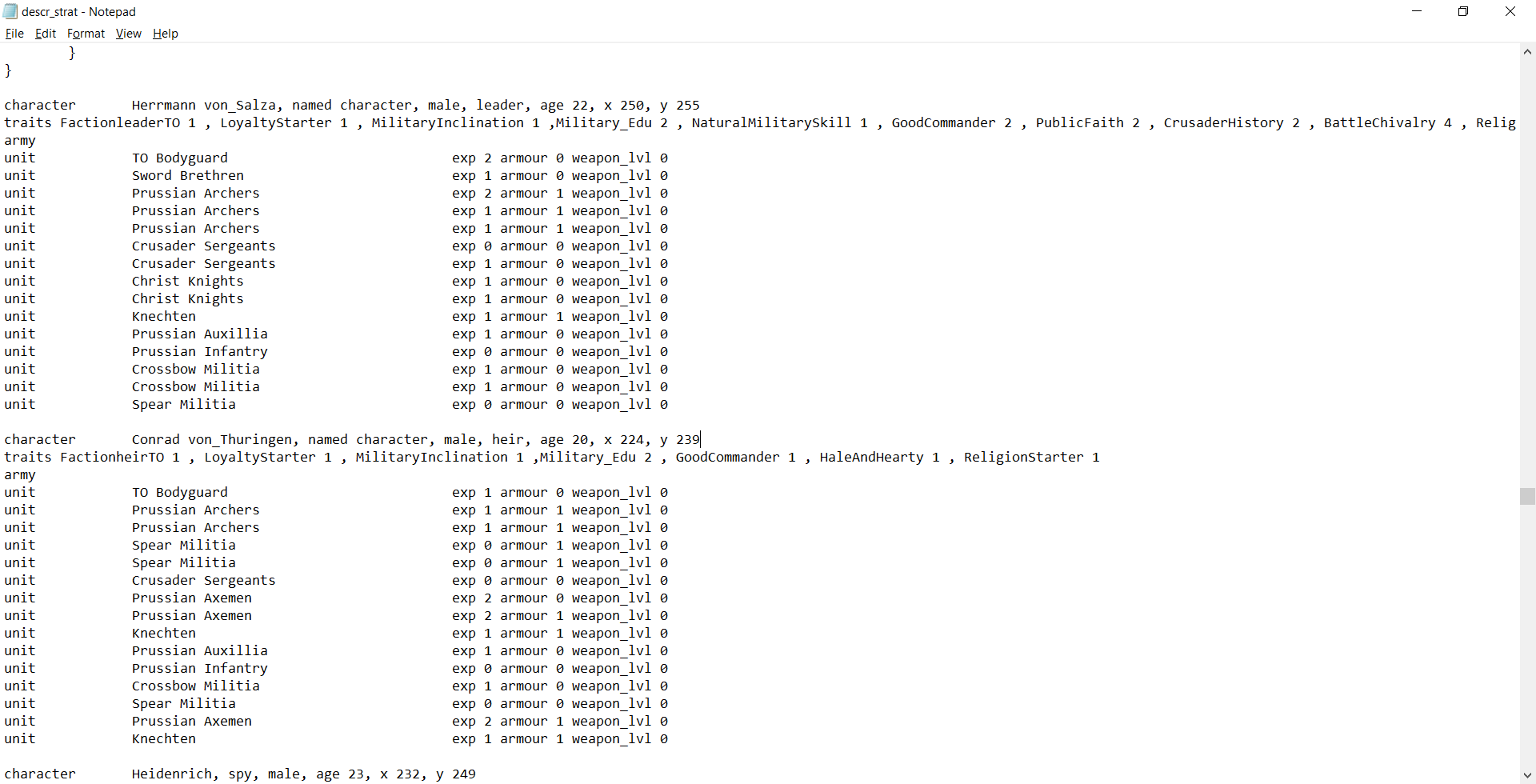 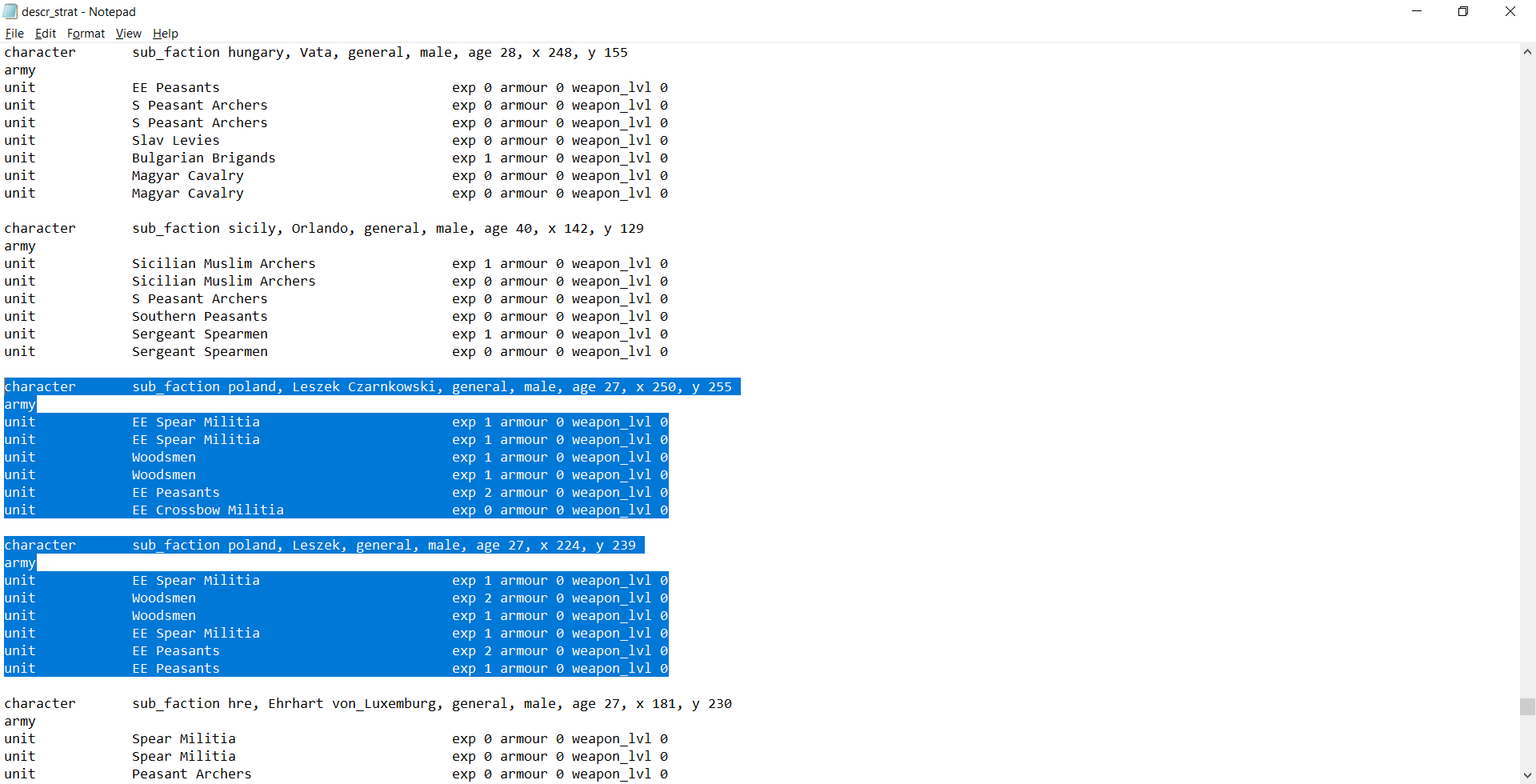 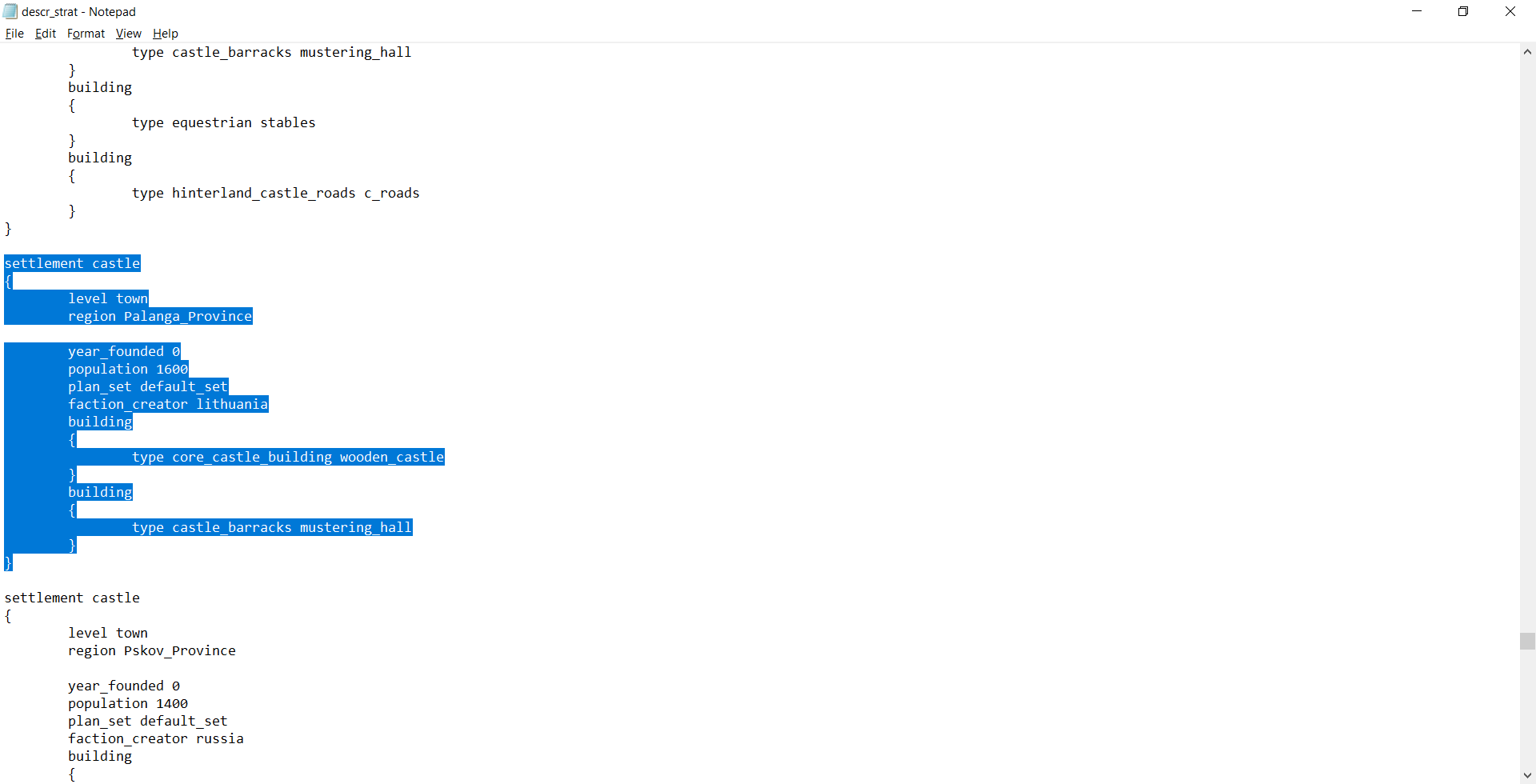 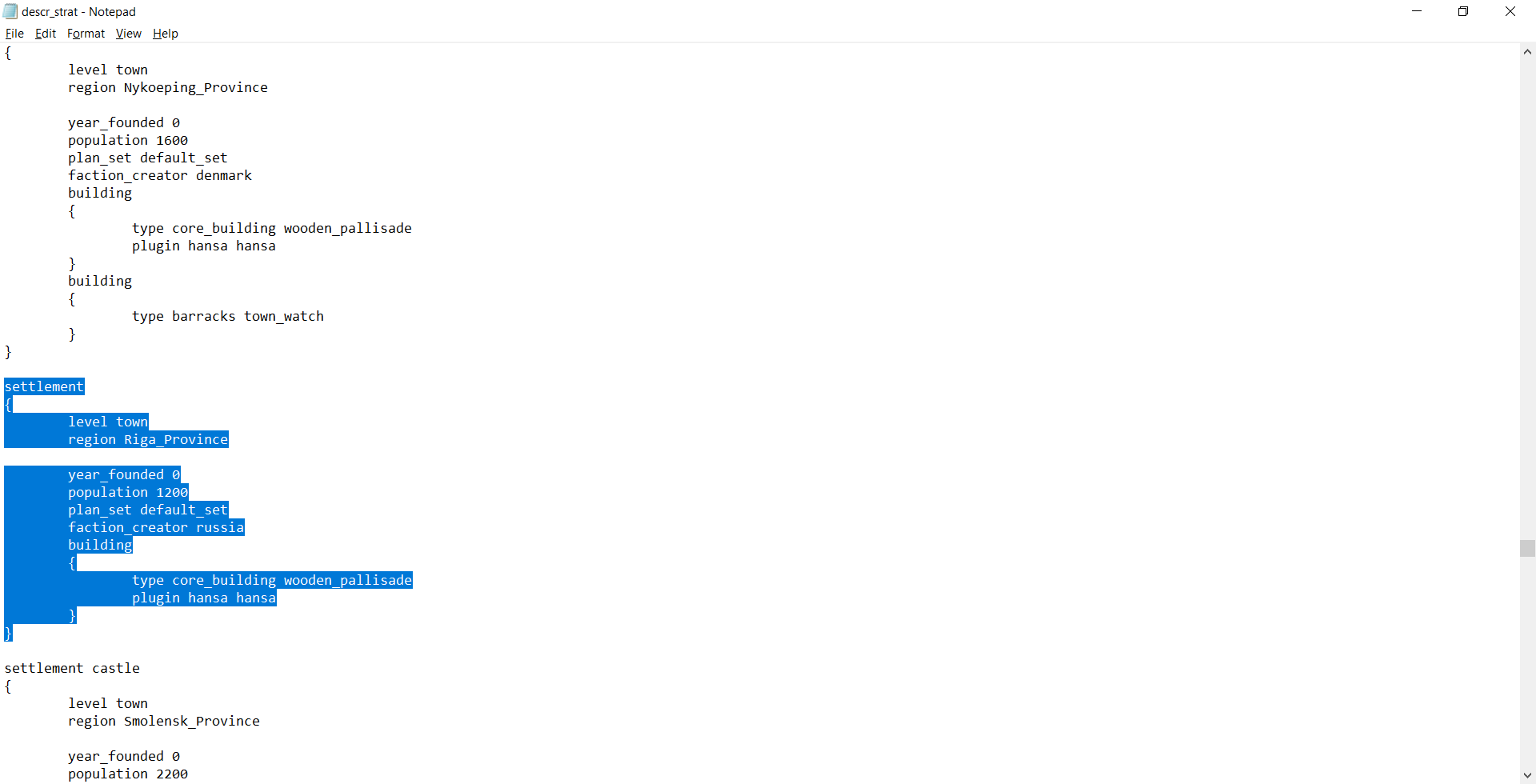 From this point on, launching your game without having completed this guide will likely result in a campaign crash. This is your restore point for the aforementioned fresh start but honestly its piss easy so don't worry about it.

First up, delete the TO's emergent status from campaign_script found again in the imperial_campaign folder. Just scroll down and cut out their entire part. It doesn't matter if you leave them in the table of contents right at the top of the file but for the sake of de-cluttering lets kick them off that too.

Head into descr_events, again in the imperial_campaign folder- and slash out the TO reference there too.

Then head back to your base data folder for SS and find descr_sm_factions. There you should find the TO and change their 'has family tree' value to yes, as well as cutting all of the horde details that come with them to begin with. Also delete the 'spawned_on_event' line next to their name.

The family tree bit isn't essential but it just creates a nice way to trace your now very mortal faction.

Finally, go back into descr_strat in imperial_campaign. Locate the TO (currently dead) and replace those lines with the ones you copied earlier.

Change the co-ordinates of your two generals to the ones we notes down for Riga and Palanga. For the sake of de-cluttering, I think its best to assimilate the two side-armies you get into those generals' stacks too.

I'd also suggest taking their ages down to around 20, just to give you more time with them and allow the now vulnerable family tree to grow lest one catches leprosy and kicks the bucket instantly.

Head right down to the rebel armies and pick through until you find the ones that match the co-ordinates we noted down and delete them.

Also delete Riga & Palanga from the rebel settlements list since the TO saw them and frankly itsfreerealestate.

Try use my scrollbar at the side for reference if needed. 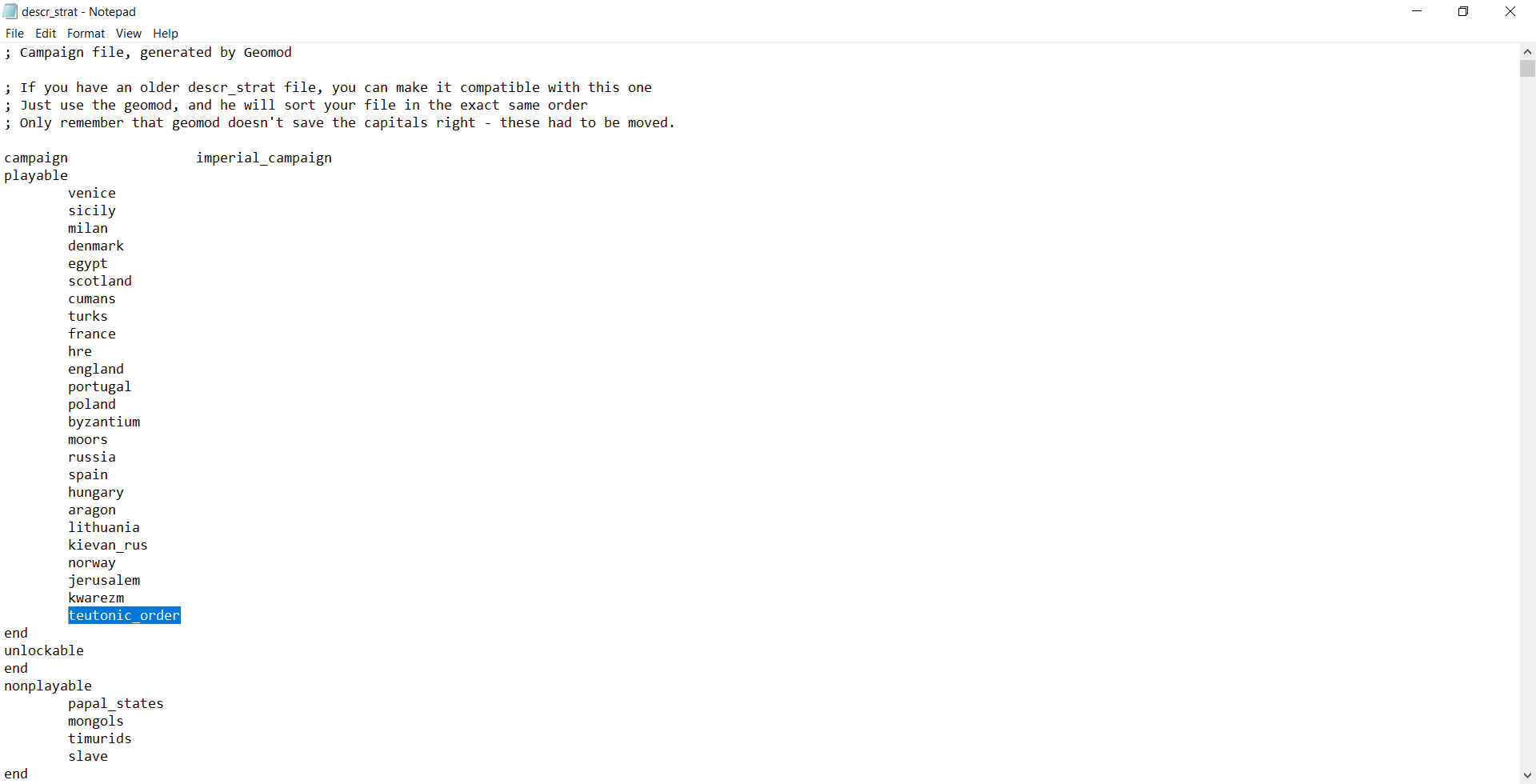 All done! Just slot the TO into the playable factions bit at the top of descr_strat...

...and you should be sorted! Launch the game and launch their campaign. Congradulation, you've cheated history and a ten year old game that only wanted to make people happy.