First time I've ever made a guide and it's because I feel this game has so much potential and it's a genre I really enjoy. I loved we are billions, and i love the sci fi element to this game. The upgradeable mech, ton of weapons, and the horde (almost bullet hell) combat combined with a base builder/resource management game.

That being said this game can be a bit of a mess. And I see a lot of people asking similar questions to problems in the discussion forum.

So I thought I'd make this guide to highlight a few issues I've had and the fixes I was able to implement. Hopefully they can help anyone having similar issues and save them from throwing away their saves.

To the devs. Absolutely love this game. I've been playing almost non stop whenever I've had any free time since i got it. But it definitely needs some polish and patches.

On my first playthrough, I turtled hard, and didn't go for one of the main 3 quest metals (titanium/palladium/uranium) until after day 60. I cleared the headquarters map, and walled off a huge area. I defended mostly by myself using teleporters, with an inner citadel I walled off and placed my turrets within.

The waves were completely trivial. Then I unlocked palladium.

Suddenly whole new alien types joined the very next attack wave in massive numbers. My gear, which was capped at blue due to a lack of access to advanced metals, really struggled. And when I tried to engage the hordes personally, long range artillery units bombed me into oblivion.

Unlocking one of the metals other than palladium (uranium or titanium) likely also leads to new enemies being added to waves, based upon their respective biomes. This was also observed by Carrier Kommander in the comments section.

If you're one of the ones that breezed through this and didn't notice any sort of difficulty spike. Congratulations. You can ignore this tip.

UPDATE - The current theories in the message boards suggest some combination of time played and HQ level effect the size of the waves. And unlocking the campaign mission metals just introduces new, tougher, enemies to the waves.

If like me you felt out gunned, and wished you could turtle hard AND gain access to the full tech tree before engaging in an elevated theatre of war... I strongly suggest advancing the main quests up until you unlock the mining outpost missions for the 3 metals. Then STOP.

Do the tanzanite side quest and learn about using cultivators. You can then return to your base and grow various plants which you have scanned. When harvested different plants give you different resources. Including the 3 main quest metals (and the side metals).

Maps and quest objectives can bug out for a few reasons in this game. If you need to regenerate a map then you will need to still be able to travel to it. Once there drop down a save.

Next thing locate the games save folder. For me this was at:

Sort the folder by date modified, and delete the most recent map save (it will be one of the .map files).

Reload your save in the game, and you should get an error message saying the game has to re-create the map. And you should load into a fresh map.

I can't test to see if this will fix broken objectives, but hopefully it will. And if anybody confirms this I will add it to the guide.

I was unable to find a console command to re-create this effect. Doesn't mean there isn't one though. 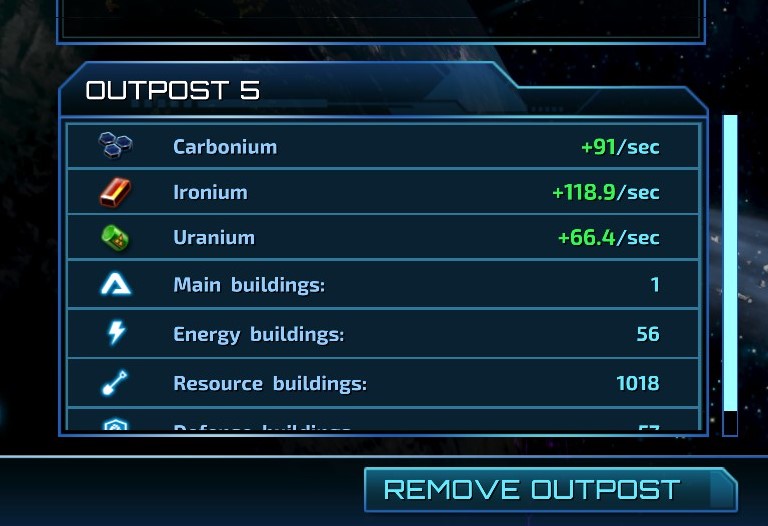 IMPORTANT - For those of you not bothered with the testing or why I've came to the conclusions I have.

The best (arguably most efficient) way to harvest stuff is just to ram a bunch of cultivators together at an outpost, put harvesters around them, make sure they can run, and then leave to never return. I got a value as high as >50 uranium/sec doing this without even really trying.

Here is the income I managed to receive from a single outpost doing this method.

Sadly I believe this only works in campaign? Will clarify once I finally stop playing campaign and try survival.

You can even combine plant types to give you high positive incomes for multiple metals.

IMPORTANT UPDATE - Credit to - RaptorSolutions for noticing that, if you clear all your objectives and radiant objectives, you can actually view the outpost income during your stay there.

Previously I had been operating under the assumption you couldn't view outpost resource production until you left the map and locked it. I would then check the income. If I didn't like the values, I would re-enter the biome and leave again, to try re-roll the static values.

This new method allows you to merely pause the game to check the value and, if it's sufficient, leave and lock the value. Much faster than double loading screens.

You can still use the leave/reload method if you are on a particularly hostile map. Frequent objective generation, attack waves, and nest appearances can hinder viewing the resource menu. You spend more time on load screens, but less game time dealing with aliens.

Unless cultivators/outposts receive a patch this is by far the best way to obtain passive income in the campaign.

This ends the short, succinct part of the answer.

This disproves my theory on outpost resource generation, and suggests that to get truly awesome yields you may indeed to place the cultivators and harvesters efficiently.

Although it's possible that spamming greater numbers, with low efficiency, will still out perform a handful of perfectly placed and set up harvester/cultivator stations.

The type of plant generating the resource also does not appear to matter. Just pick one with the combination of resources you want. I tested this exhaustively below, but that's the results information out the way.

To conduct these tests, I used 3 level 3 cultivators spread out across the map. A single level 3 harvester placed adjacent to them. This was to ensure that the field was saturated with plants and the limiting factor would only be the speed of the harvesting drones, which should be constant between tests.

Tests were all conducted at the same site in the acid biome. I am unsure if biome impacts yields. I may test this at a later date.

UPDATED: Considering the conclusions I came to regarding how the game deals with cultivators in outpost maps (which you aren't currently located in), I deemed it unnecessary to continue testing differences between biomes. You can gain silly amounts of resources wherever you want.

A save was then placed and this was reloaded everytime the plant was changed. This ensured no remnant was left in the ground which could impact cultivation rates. I believe crystals in particular leave a rocky leftover in the ground which seems to not allow plants to be grown ontop of it.

The implications for this in practice would be that if you wish to change crop (particularly from crystal to plant) it may be worthwhile to turn the cultivator off. Destroy the crystals. Then put down flooring and sell it to expose the plain ground.

I am unsure if familiarity levels impact yields of harvesters, but to try and account for this I set values to 5 using the console prior to running the tests.

The results show very negligible differences. Sometimes I found outliers where the rate could be higher. These were never consistent and suggest to me an element of RNG involved when you power up the cultivator so that cultivators all don't just give flat constant amounts.

The best strategy is still to spam them at an outpost. Make sure they run. And then leave and enjoy the income.

I tested this with 12 cultivators and 20. The extra cultivators didn't lead to a large boost to the range of uranium income I was seeing (even upon addition of more harvesters). It seemed to always end up between 25 - 65 uranium/sec.

If I had to guess I'd say that the amount of cultivators the game allows for passive income is capped. And the huge difference in income is due to valid cultivator being assigned an rng income value whenever you leave the map, which is then saved until you return.

This rng value appears to have quite a significant range. It can result in your income varying from 25/sec to as high as 65/sec (highest recorded uranium income I observed).

UPDATE - High range only currently observed with uranium. Other metals/etc had a much tighter range. May depend on what plant species is selected or other variables. Either way the ranges are high enough (and broken enough) that I don't feel the need to carry out further testing.

These structures can get destroyed during gameplay. Some people say they regrow, but I spent 3 hours looking for another one with the map covered in acidic plants. Was a nightmare. Quick tip to check your map to see where they are, or if indeed there are any present. Use the console commands from the wiki:

The specific command you're looking for is the toggle minimap reveal command:

The roots will show up as skulls on the map.

You don't appear to need to toggle this back off before leaving the map. It won't suddenly reveal your other maps. (It didn't for me at least).

For those concerned with achievements using this does not appear to void receiving achievements.

If there are no skulls on the map, you can either wait and see if the people saying they respawn are correct, or you need to hope you have another save/can be bothered restarting.

I encountered this bug on the tanzanite harvesting mission. It may happen to people in different places I'm unsure. Hopefully this fix works in those cases too. In my situation, the enemies stopped coming, but the music stayed combat music. Rift travel was stuck as disabled.

I tried going to the edge of the map, where the waves spawned, and firing grenades to see if any spawns were stuck off screen. My logic here being to kill/aggro any stuck offscreen, but no success. Multiple reloaded saves at various points of the mission all had the same bug, and ended the same way.

The trick I found to work was again to use one of the console commands from the wiki:

This time the command you want to use is the one to remove all units from the map:

After using the command the map should clear (visible to you if you use the 'show minimap' command from the previous tip). This resulted in the wave finally ending for me, and allowing me to finally travel using rift jump again.

I would probably toggle this one back off before leaving the map. I never tested to see if the effect would follow you if you returned to base. To toggle off just use:

Save regularly, and if your base gets hit by hail/tornado/earthquake then reload. As long as the save was made prior to the event triggering it should let you re-roll the event and hopefully get an asteroid or wind/mist/ion storm.

I've lost the odd couple of minutes here or there to this method. But I once took about 20 minutes repairing all the damage to a large base manually, only to be hit by another large scale event shortly after. So it's a massive time saver.

If this helps even 1 person I'm happy. Took me like 10 minutes to knock together and it helps take the sting out of a few annoying aspects of an otherwise great game in my opinion.