What you were convicted of isn't really revealed (or hasn't turned up in the 40~ish hours I've been playing). In the 31st century, it could be anything. Maybe you killed someone, maybe you stole a loaf of bread to share with your best friend/monkey. Whatever it was, Sentinel Corporation has given you two options:

If successful, charges will be dropped and (maybe) you can resume your normal life.

With the note that no one will be coming to help you, you can only use what you find on the planet and a curt "Don't call us, we'll call you," Sentinel Corp peaces out like a dad going to the gas station for milk and cigarettes.

You're dumped on a planet (or large moon) in the Izitial Prime Sector. There's some nearby neighbors in the sky. There's no atmosphere and a surface temperature of 0 degrees Kelvin. You've got a crappy little pod, some rations and your will to survive. Get to it!

As you explore your planet, bits of lore and history will pop up. If you don't want that spoiled, please skip to another section.

Here There Be Spoilers!

In my exploration, I've put together this (almost definitely incomplete) timeline:

3034: A warp gate is completed to the Izitial Prime Sector. The first ship through or the gate itself loses power near a planet, and goes down hard

3038: Another vessel crashes. Crewman Ikhlas survives for at least 6 months

3058: Sentinel Corp sends the second convict to try terraforming. You're reading this now!

Originally posted by Xiaodan, 3055:My calculations tell me that the planet postion should be best to terraform it in around 2 years. 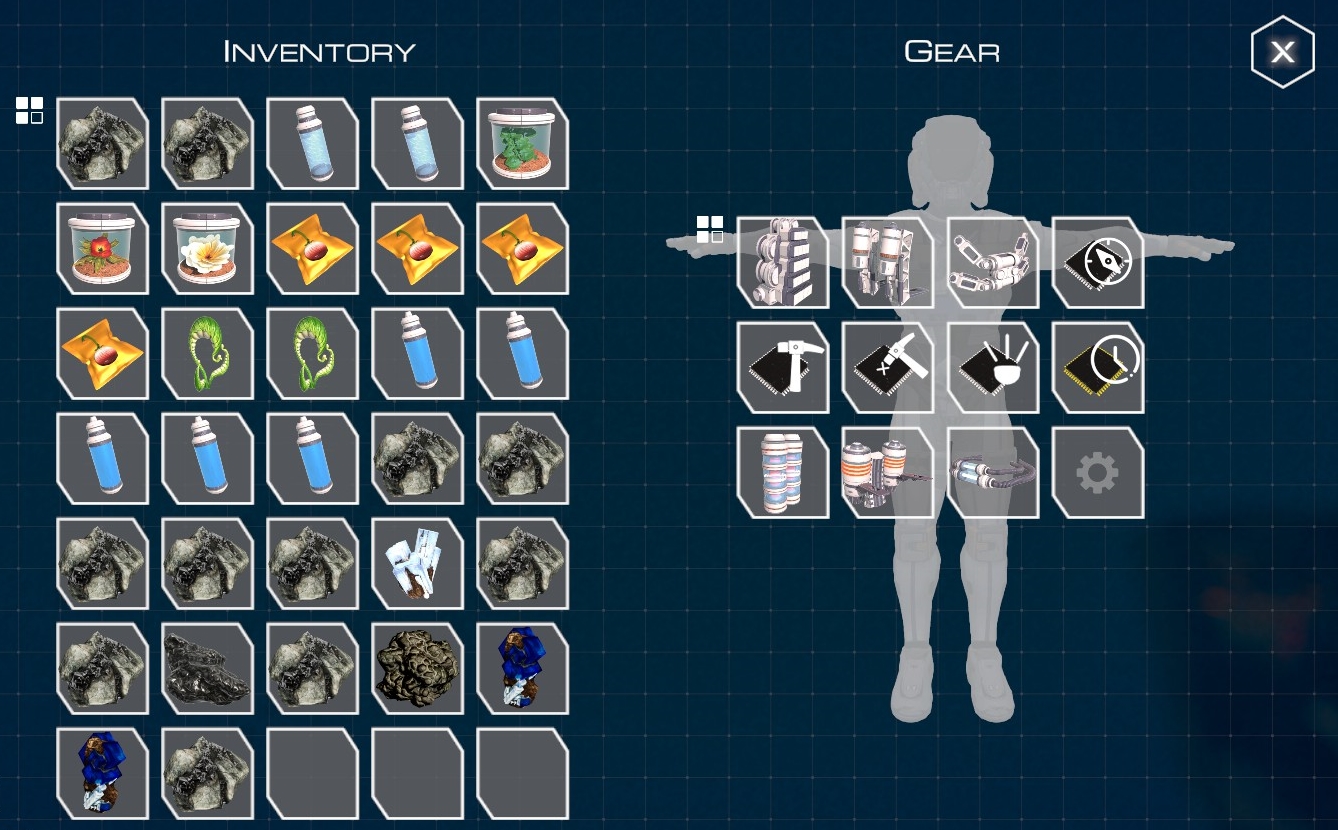 Sentinel Corp. sure doesn't want to make this too easy for you, convict! As such, you start with less than the basics. You don't even have a backpack or O2 tank when you arrive, or a functional tool to make or destroy things. To get started, you'll need:

5 magnesiumThat's enough to make a flashlight and get your mining tool capable of constructing (and deconstructing) things. You'll need to equip tech in the inventory slots on the right side of the inventory screen.

Important Note: Planet Crafter cares little for your well-being. You continue to use oxygen, hydration and health/hunger when you're in the inventory, reading messages or interacting with objects. Do not choke to death reading lore from an abandoned space ship. It's embarrassing.

Other than the tool upgrades, you'll have three main bits of gear to craft. You'll need:

1 siliconThat should allow you to make the first backpack, exoskeleton and oxygen tank.

As you spend time on the planet, you'll get new technology and upgrades two ways.

One, Sentinal Corp will unlock them as you achieve certain milestones, like increasing the Terraforming Index.

Two, you can find blueprint microchips when scavenging and searching. You'll need a blueprints screen to decode these and make them useful.

The two sets of blueprints (Sentinel Corp and blueprint microchips) have NO overlap. They're exclusive to themselves, so you'll never get a blueprint you already unlocked on a microchip.

There are more microchips than blueprints, so finding all of them is unnecessary.

Now that you have some pocket space, can stay outside longer than you can hold your breath, and have a useful tool, you can start working to get the planet up to code so you can get off this rock and go back to whatever cyberpunk dystopia you came from.

Sentinel Corp has helpfully given you four metrics to measure your success. These are:

Oxygen (O2): Measured in "parts per..." something. Quadrillion, Billion, Million.

Terraforming Index (TI): An aggregate score based on the other scoresAll of these numbers start at 0.

You have a machine type for each of these.

Various plant growers will create oxygen. Early versions have to be built inside a structure, and eventually you'll get plans for models that can stand the outside.

Heaters create heat (duh). Again, early version have to go indoors. Is it safe to live with a space-heater that can affect global climate?

But that's what Sentinel Corp gave you, so deal with it. Later versions go outdoors.

Pressure is created using drills that release gases trapped under the planet's surface. You start small and things get bigger and bigger as you progress. These always go outdoors.

All these things require power. The first generation method you have is a wind turbine.

How, exactly, does a wind turbine make power on a planet with no atmosphere?

Eventually, you'll get solar panels (that don't need to face the sun, sky or care about shadows). There are other methods after that, but we'll get there when we get there.

Needless to say, this job isn't going to get done any time soon.

I'm going to try and be vague to avoid spoilers, but there will be some spoilers here.

A Dynamic WorldAs you set about terraforming the planet, your actions will have consequences. This is good. You want the planet to change so you can go home.

However, the long-term good might be complicated by what happens in the meantime. As you increase the temperature, pressure and oxygen content of the planet you will eventually get a blue sky, clouds and rain.

Immediately after landing, you'll be using ice to make drinking water. Will that be a good long term solution?

What happens to all the ice? Where will that impact the most?

Your initial landing site is at the bottom of a lake. Not ideal.

You're going to need lots of room, resources and machinery to make this project take less than a century. Nothing compels you to stay at the landing site. Maybe explore with an eye to the future before getting too comfortable.

LycanDID Game Tip: Because of constraints, it became necessary to move my central base. Planet Crafter's backpack is not large, and nothing stacks. Moving a dozen storage containers worth of stuff, tearing things down, rebuilding them, was all agonizing. Plan ahead and avoid my pain!

You'll no doubt notice that yours is not the only craft to have "landed" on the planet. You'll want to explore them for materials, technology and supplies.

You'll also want to look at your Blueprint Screen to figure out what needs to happen to unlock technologies from Sentinel Corp.

LycanDID Game Tip: You should work to unlock the food grower as quickly as possible. It's attached to an oxygen milestone. Long term survival without food isn't possible, and those space food pouches can get pretty sparse if you ignore food too long

Survival on this barren rock will require some work, and you'll need stuff to work with.

WaterEarly on, you'll be melting ice to get water.

At some point, you'll have changed things enough that the ice has melted (yay!) but not enough to have liquid water (boo!). You'll need an atmospheric water collector to deal with this. As more time passes, you'll get liquid water. You can collect this with Lake Water Collectors.

The epitome of water tech is the water filter: basically a straw with some activated carbon in it. You can drink from puddles and not die!

FoodEarly on, you'll live on space food. You get a couple pouches as part of your sentence, and you can find more by scavenging. You don't necessarily need to go into wrecks for this, as there are chests littered all over the planet.

You can grow four crops:

Seeds need to be found by scavenging. Food growers always return one seed, so no way to increase the number of seeds by growing things.

OxygenYou'll need to harvest cobalt regularly to be able to make oxygen canisters. Entering a hab module or your capsule will recharge your oxygen supply. You can cheese this by finding what you need to make a hab module and building one wherever, and then taking it down or leaving it as a waypoint. Empty rooms don't seem to need any power, so why not? This requires:

1 siliconFor which you get one room and a door to get in and out.

In the late stages of the game, there's an expensive machine called a Gas Extractor. You'll need at least one to progress, and the primary function is to produce methane. It will occasionally produce oxygen cylinders.

MineralsA lot of them are just scattered on the ground. Pick them up and you're off!

When you get into mid- and late-game you'll need some rarer materials. As you explore, stay aware of different effects. Does the lighting change? Is the ground different? Are there weird clouds? Take note of these places, as they probably indicate where to find or mine rarer materials. Beacons are a good way to find these places again.

You will eventually unlock machinery called Ore Extractors. They're linked to a pressure milestone and require osmium to build. When you place one, it'll show an icon in inventory with the "highest quality" material it can extract. In most places, that'll be iron. Be aware that some ores require a tier 2 extractor to harvest.

All those places you took note of because of weird sky or ground or lights or whatever? Probably good spots for an ore extractor.

You'll be pelted by meteors from time to time. The color of the sky and the meteors will give you a clue as what you're about to get hit with. You can also use the rocket launch platform to summon certain meteor showers.

Meteors will deposit the regular minerals and aluminum, super alloy, uranium, osmium and iridium, depending on the type.

LycanDID Game Tip: Your structures appear to be indestructible in a meteor shower. This is good. You, however, are not. You can be pulped by a meteor strike. Meteor chunks can also clip into your base. They will despawn eventually, but there's nothing you can do but wait for that to happen.

You'll also find places on the map that are gated, usually by large pieces of ice. You'll need to modify the planet to get past these obstacles and collect the delicious resources beyond.

ZeoliteIf you play like I do, you'll probably unlock a recipe that wants this resource before you ever see or have a chance to obtain this resource. It is the only thing rarer than fabric, and used in some late-game recipes. It's some sort of organic mineral, so you'll need to see plants on the surface before this stuff appears.

It is, so far as I can tell, non-renewable.

Just for shiggles, I've tried sticking zeolite into the DNA Manipulator, the Tree Spreader, the Flower Spreader and the Recycling Machine. None of them do anything with it. 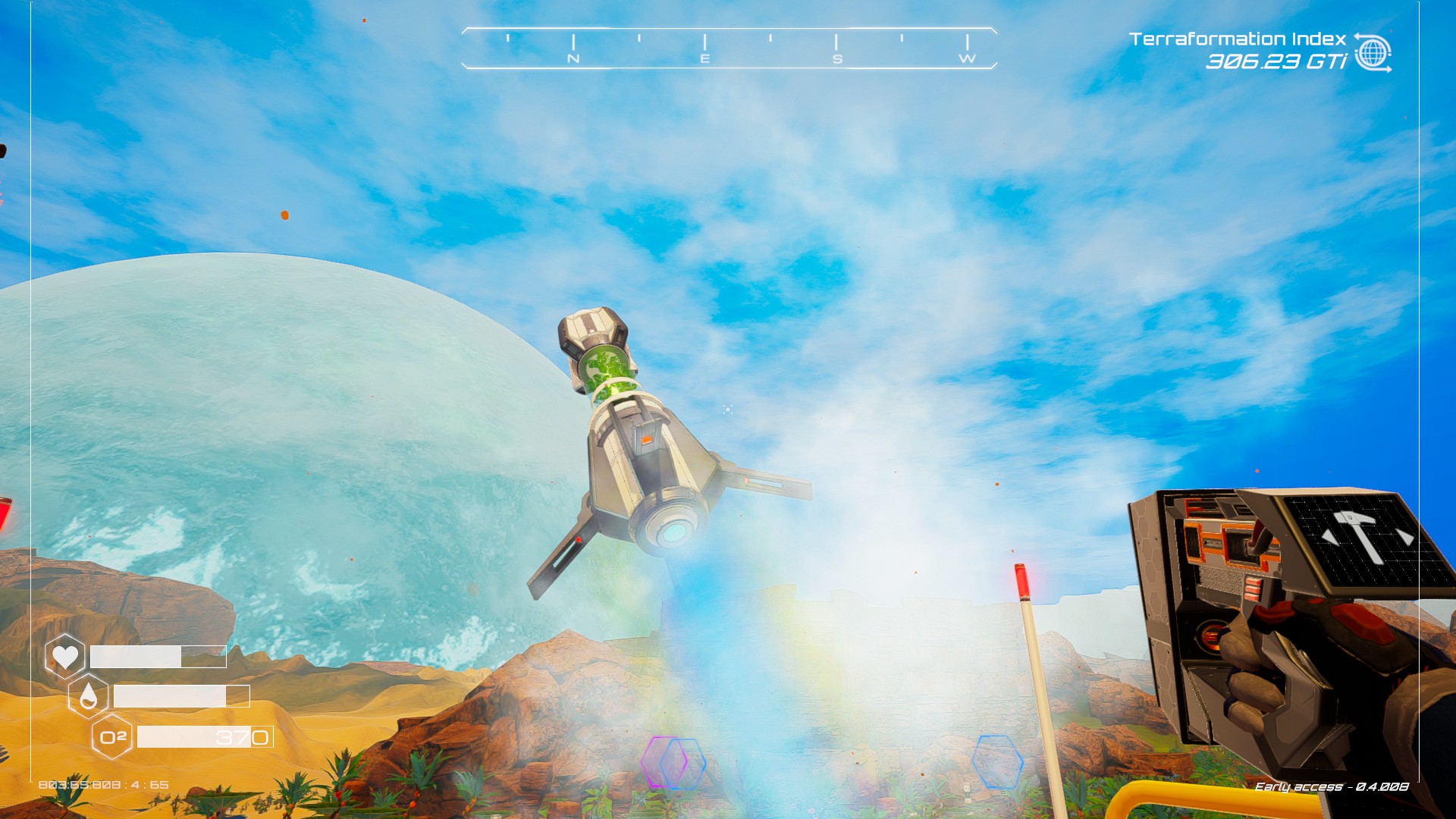 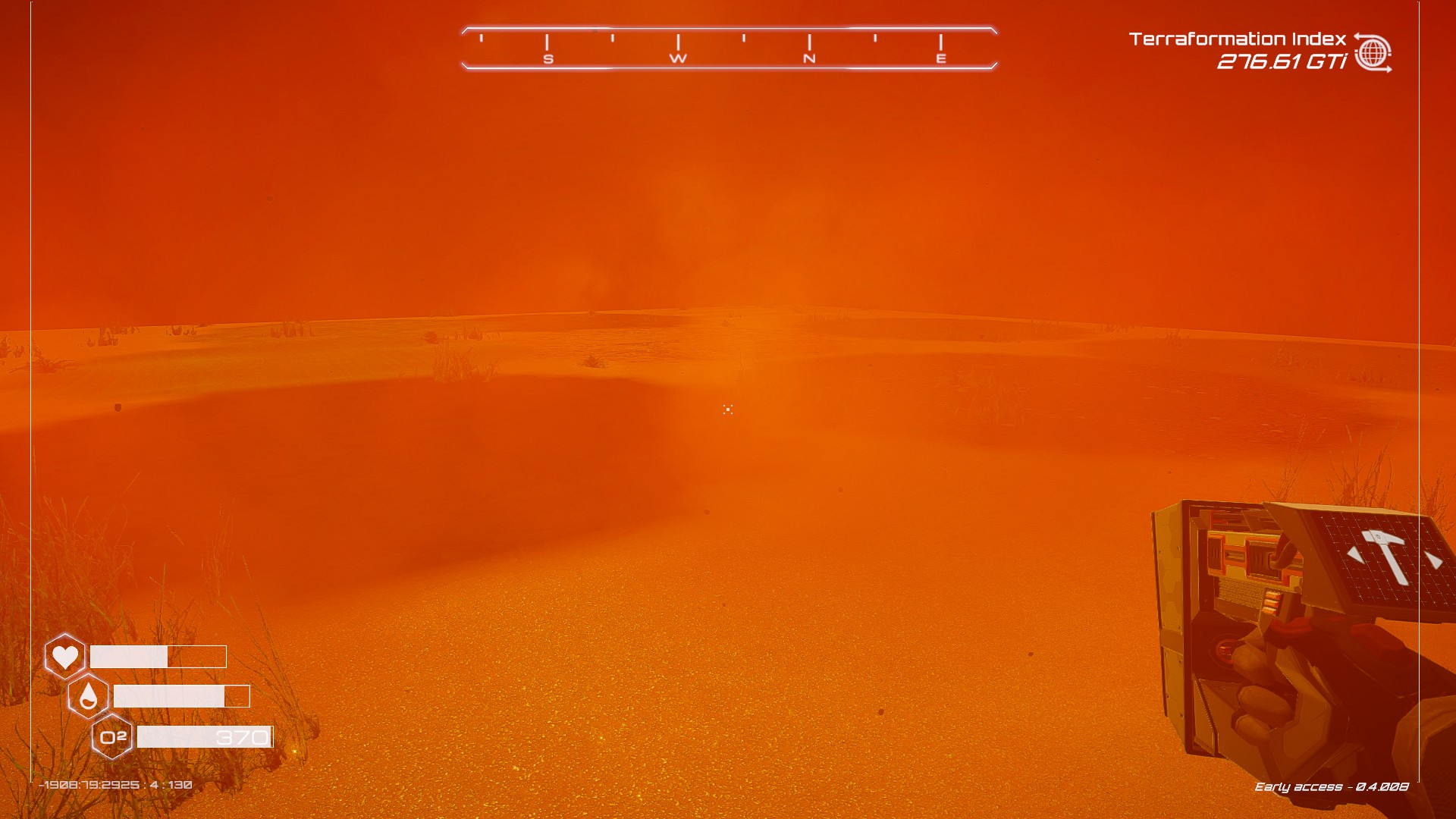 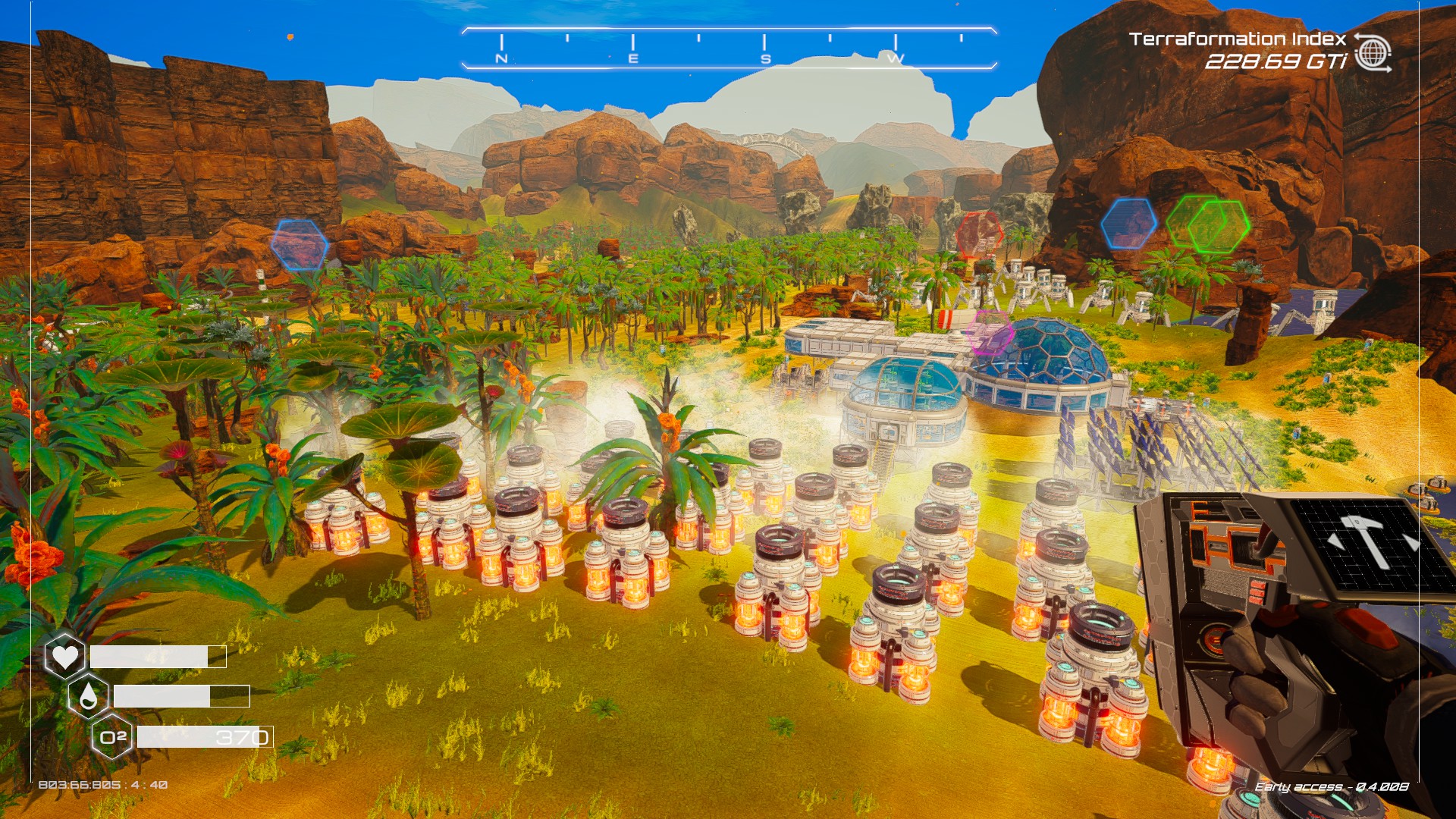 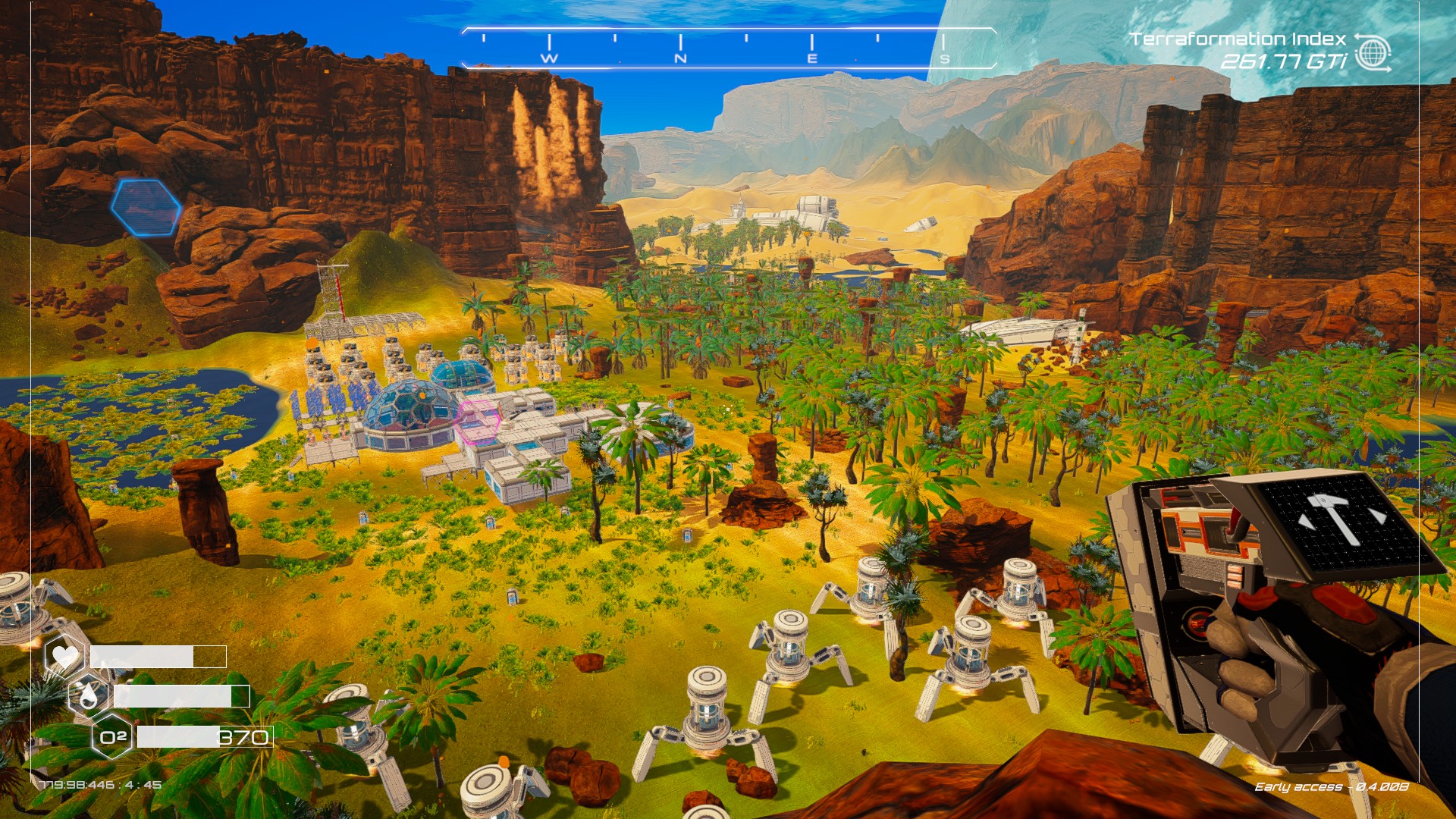 Tree Spreader T3Holy crap, that green circle in the build preview doesn't indicate ANYTHING. I had three spreader T2s near my main base, upgraded them to T3s (requires one T2 fertilizer to tear down a T2 and make a T3). Had trees sprouting through the floors of the base. Had to tear them down and move them WAY out over yonder to get that to stop.

RocketsFirst, at least some of them launch like this is Kerbal Space Program...

Gonna spread seeds from space, huh? I'm not sure you're gonna clear that hill...

I did find I was launching rockets that summoned asteroids I didn't really want or need. For example, I have a pretty solid iridium mining setup, but I was still chasing that sweet, sweet 1000% pressure bonus. Use rockets! The bonuses stack!

Map EdgesYou can't, as far as I can tell, fall off the map. You can clip through a lot of the terrain and get a view of the backs of mountains, but fortunately the backs don't seem to have collisions. One thing I found in one corner is a terrain test area. Patches of all the different ground types in one corner of the map.

My BaseBecause, like, I've worked on it for a long time, and I demand you appreciate it!