Home She Will Punish Them Optimal skill leveling path: updated for the 7/19 changes 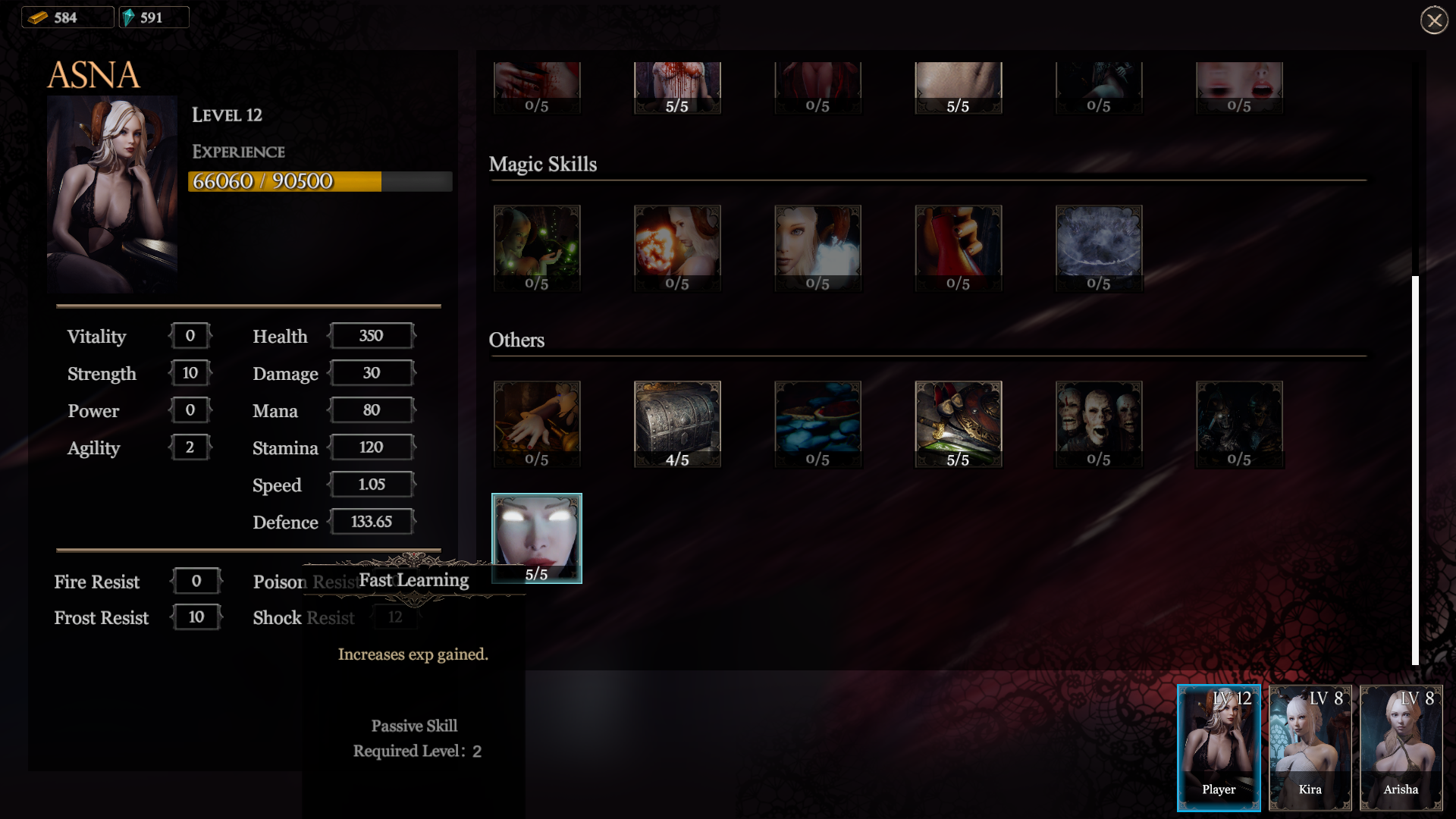 Take "Fast Learning" as your first skill and max it out. Do not put points into anything else until this skill is at 5/5.

The idea here is not to gain more XP from mob kills, although I suppose that naturally happens too. You need to spend every single gold coin you find on buying XP books and scrolls, found at the "Maid" merchant in your palace.

If you get creative with what you sell (...your companion starts with gear that they won't miss) and have a lucky shop inventory roll, you could be level 2 before you even leave your palace for the first time.

Doing this allows you to essentially "buy levels" as fast as you can farm the gold to do so, which lets you level up MUCH faster than any other method. This means more skill points faster, and creates a really slick power-curve snowball effect in just a few short steps.

Once you have Fast Learning maxed out at 5/5, continue on to part 2. 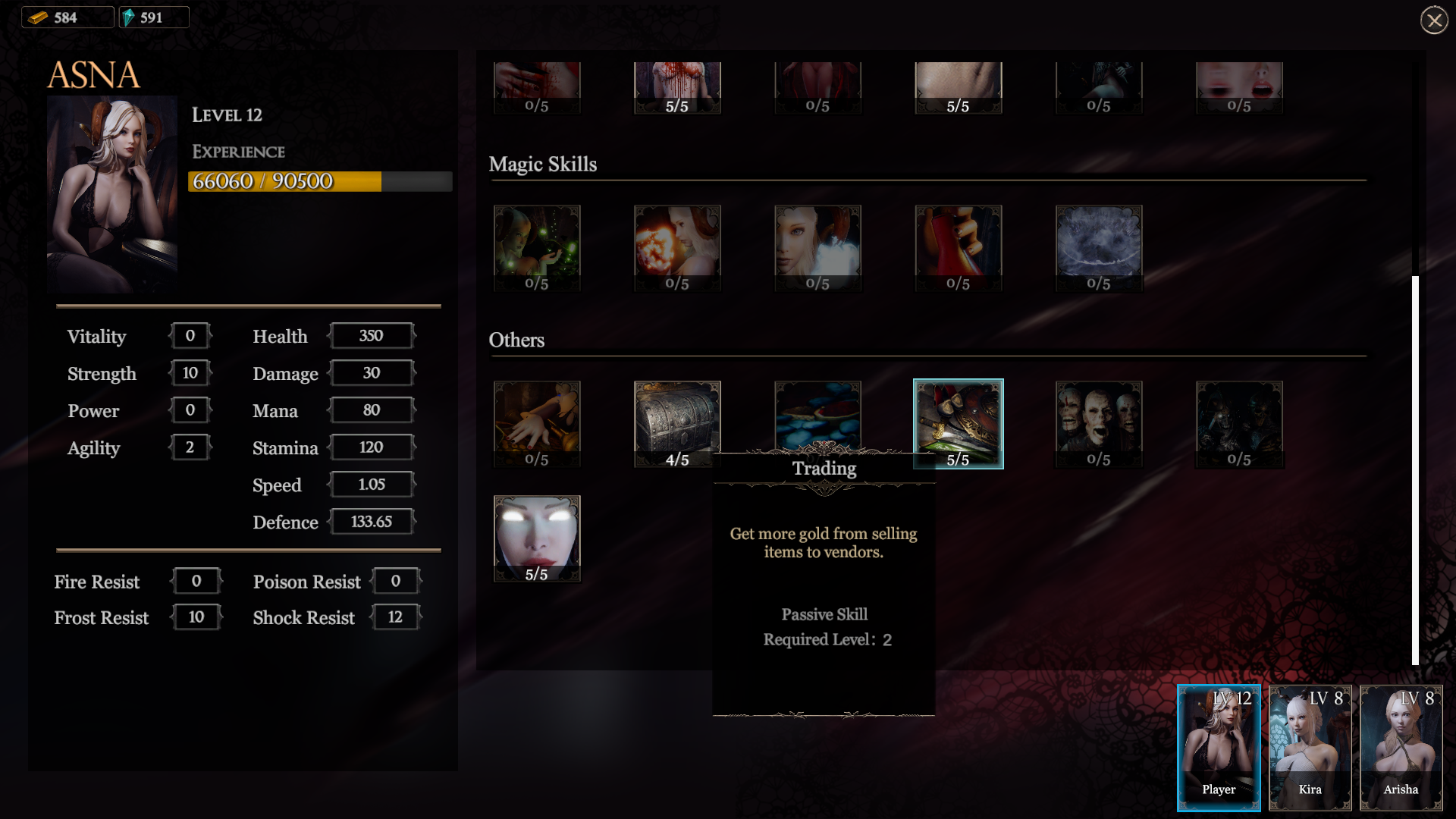 Great, now that you have mastered the grind-gold-and-buy-XP-with-it method and maxed out Fast Learning, you're ready for phase two of your snowball to glory.

Using the same principle from step 1, throw all your skill points when you level up now into "Trading." This increases the amount of gold you get when you sell items to merchants. More gold = better ability to buy more XP from the Maid = even faster leveling. ...See where this guide is going?

Which seems like a good time to bring up another related important note: as a general rule of thumb, pick up EVERYTHING that has a sell price of over 100g on it. As time goes on, you'll learn what you can afford to leave on the ground and what you need to grab. (bag space vs sell price is such a big part of life here, that it's pretty much its own mini-game) You'll probably come up with your own loot rule filter by the time Trading is maxed out; but for now, anything over 100g goes in your bag.

NOTE: Golden keys sell for 600g with Trading maxed. Nine out of ten gold chests you open will yield less total value than just straight up selling the key itself. Like...far less. You'll usually see a couple piles of anywhere from 2 to 12 gold each, maybe a gold jug that sells for 160-something, and on a GOOD roll you'll also get a weapon or armor that WILL be worse than what you have equipped and maybe sells for a couple hundred. Trust me - white keys are for leaving on the ground and gold keys are for selling, at least as of the June 25th 2021 update. 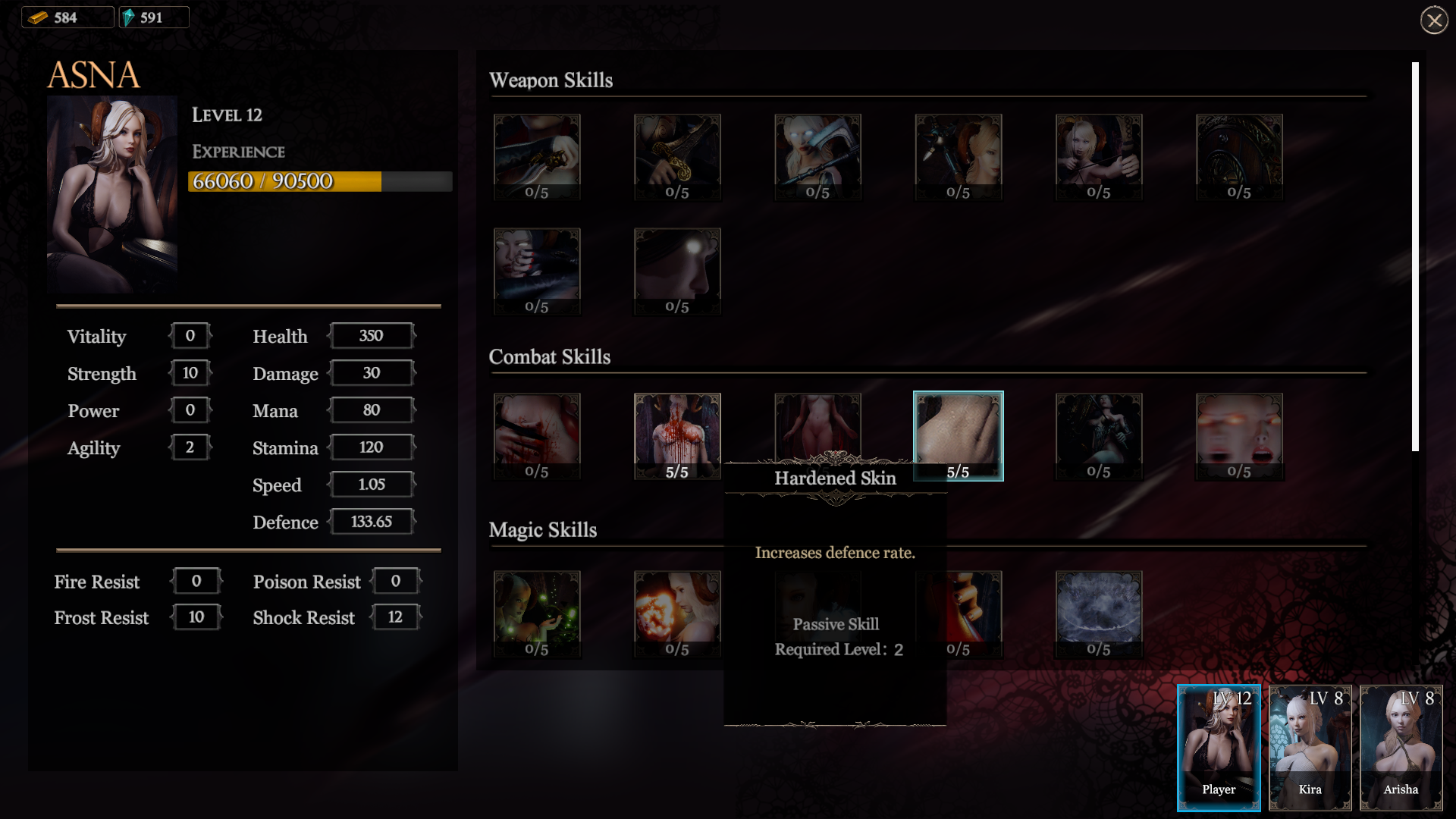 Alright, now that you've got Trading maxed and have a good steady flow of gold-to-XP flowing due to the first two steps, you can take the next big step: fighting harder things!

Maxing out the skill "Hardened Skin" greatly increases your defense stat, as if you had armor equipped that was beyond your level. So...first your level-ups brought you more XP. Then they bought you more gold, for even more XP. Now you are just straight up using that loop to buy defense!

Even with basic armor that you find while gold farming and looting, having Hardened Skin at 5/5 allows you to comfortably take on creatures up to 3 or 4, depending on your weapon. This saves you a TON of gold that you would otherwise have had to spend outfitting yourself with armor, AND makes you more tanky at the same time. It really does make a noticeable difference in survivability, and therefore the points-to-gain cost here is the second most efficient on this list.

Great, once you've maxed out Hardened Skin, it's on to part 4! 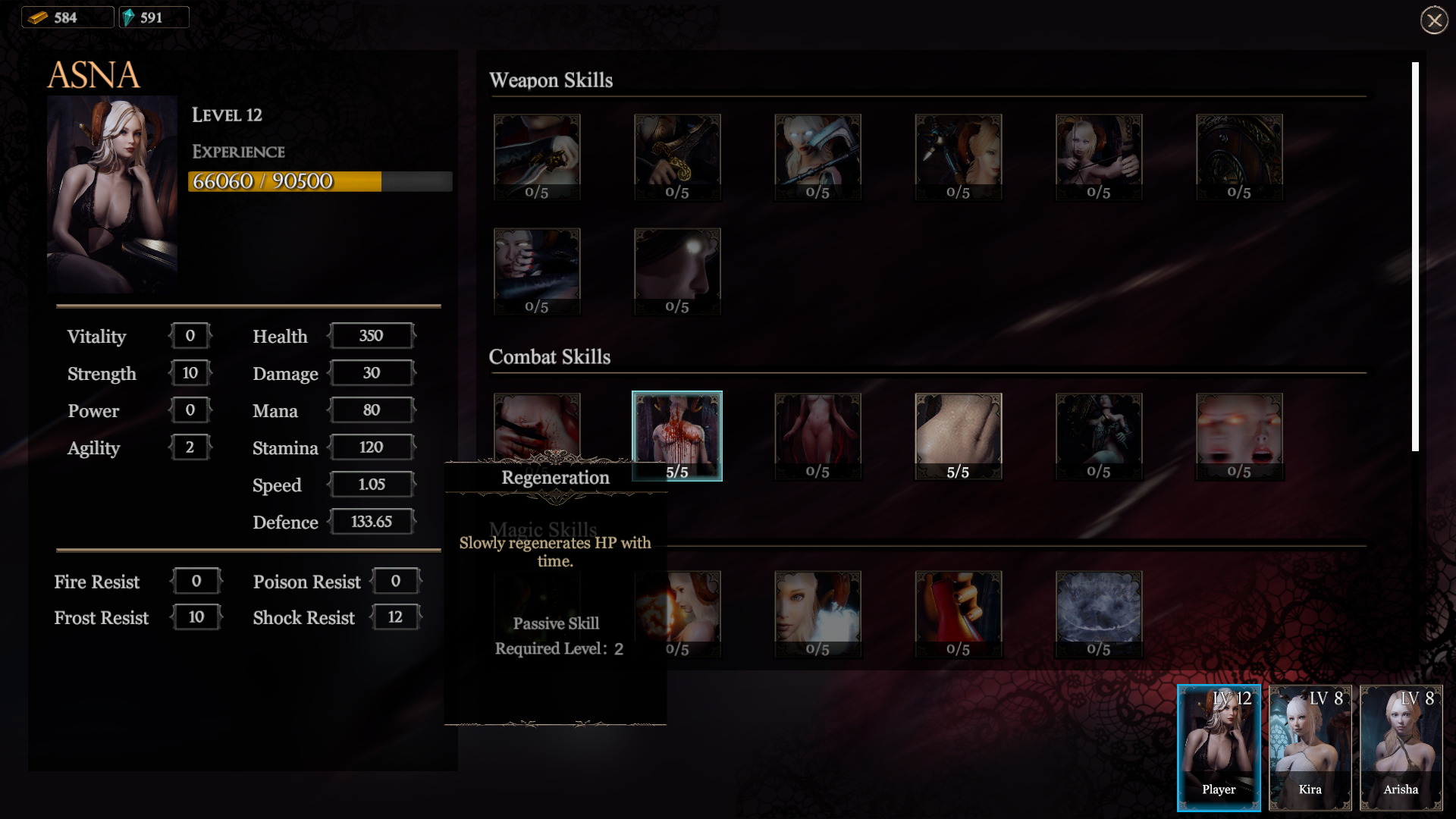 Awesome, halfway there! The skill you need to max out next, is "Regeneration." This is easily the most efficient skill in the game, and you want it bad.

Essentially as the game stands right now...do not take this skill if you like a challenge. This skill (in tandem with Hardened Skin and ANY semblance of effort on your part towards actually gearing up your armor) literally means you cannot and will not die. You can pull the whole map and then go make a sandwich, come back in 5 minutes and depending on your armor, you will still be at 100% HP. It's that insane right now.

Obviously this means you can goof off now and take things easy if you want; no more jamming the dodge button or cussing when you get stun-locked. This also frees up a TON of funding: you no longer care about upgrading your armor for any reason other than cosmetic, and you also no longer really NEED to upgrade your weapon either. At this point, until more content is released and the level cap on mobs are raised, you are officially in early endgame and are now playing FashionSouls.

That's not even the best part. With Regeneration maxed, you no longer need HP pots. ...Yeah, you read that right. Before that white text was worth risking getting hit a couple times if it meant picking even just one up; now you couldn't care less if there's a whole pile of them in the corner. I don't know about you, but personally, this automatically freed up not just a bit of inventory space on my character and two companions, it also let me sell two whole storage tabs worth of pots. Now I use that space to hoard stockings and pan- uh, never mind. 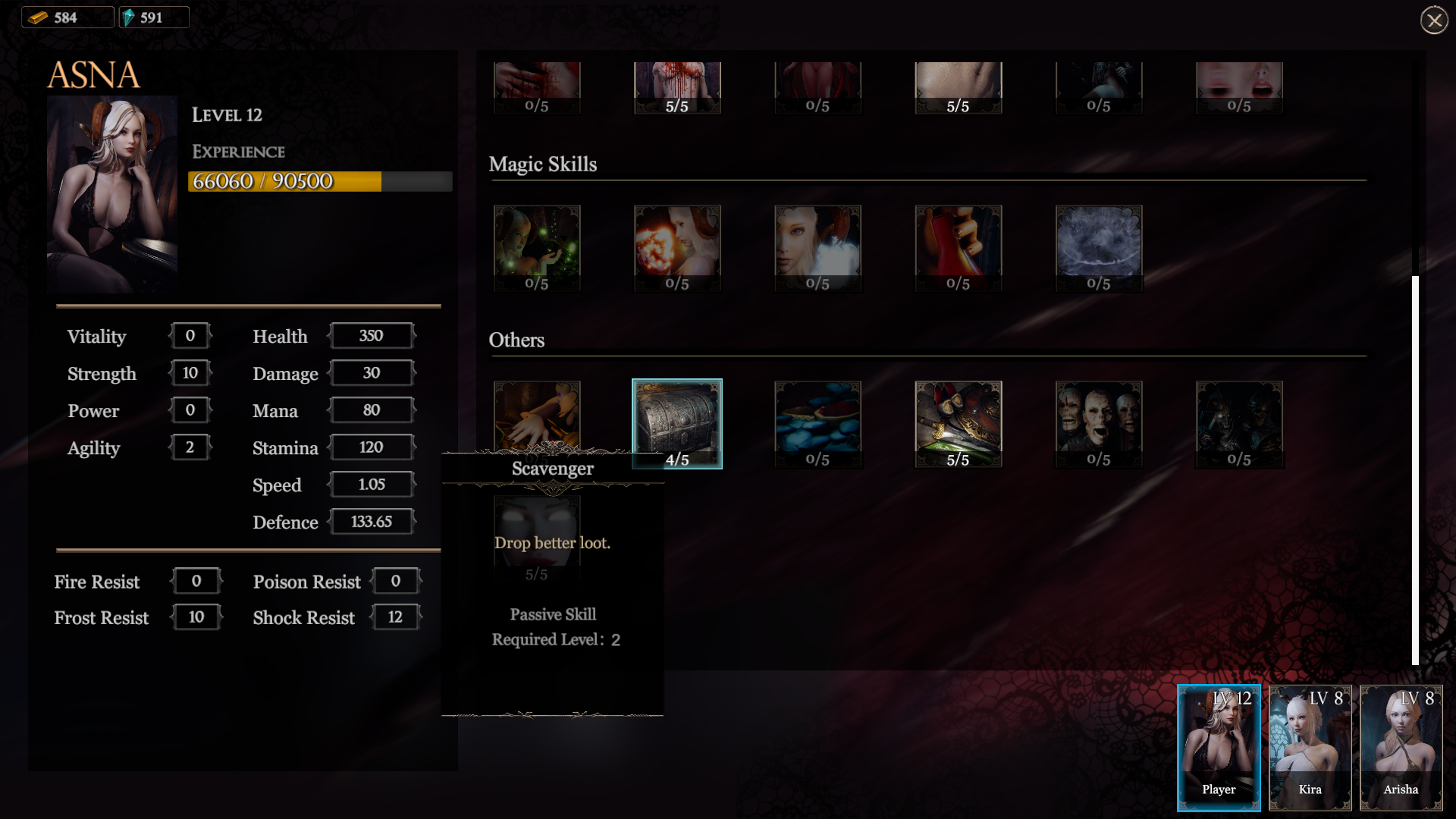 ...Anyway! Congrats on phase 5. Depending on how ham you decide to go, you could reach this point in just a couple of hours, starting from scratch on a new save file.

Still using the gold-to-xp loop from phase 1 and 2, go ahead and max out "Scavenger." This one is really just icing on the cake, and is 100% interchangeable priority-wise with phase 6 up next. Completely up to you which you want to go with first, one or other other won't really effect the direction that the character you have by now is snowballing in.

"Scavenger" basically just enhances the gold-xp loop. The way loot drops work right now in the game, you're really not going to ever find anything worth equipping, even on a low level companion. What taking scavenger to 5/5 does then, is increase the AMOUNT and TYPE of loot that drops. I realize the tool tip simply says "drop better loot," but I definitely notice a very significant increase in both amount and type when maxed. Before, you will see a bunch of silver cups (64-ish gold) and a bunch of lingerie, (18 gold...) now you will see more weapons and armor, most of which sell for at least a few hundred each.

Annoyingly, you will also see a vast...and I do mean, VAST...increase in HP / mana pot drops. Go figure, now that you don't need them anymore, right? But selling an inventory full of pots for 24g each is still more net xp gain (via the gold-xp loop!) than just the 2 and 3g that drops from kills.

It's a good option to take if you're a bit behind on leveling up your companions, like I was on the play through that these screens are taken from. It's ideal to have them both on-level with you, and that takes a ton of XP...but that's why we're here using this guide! 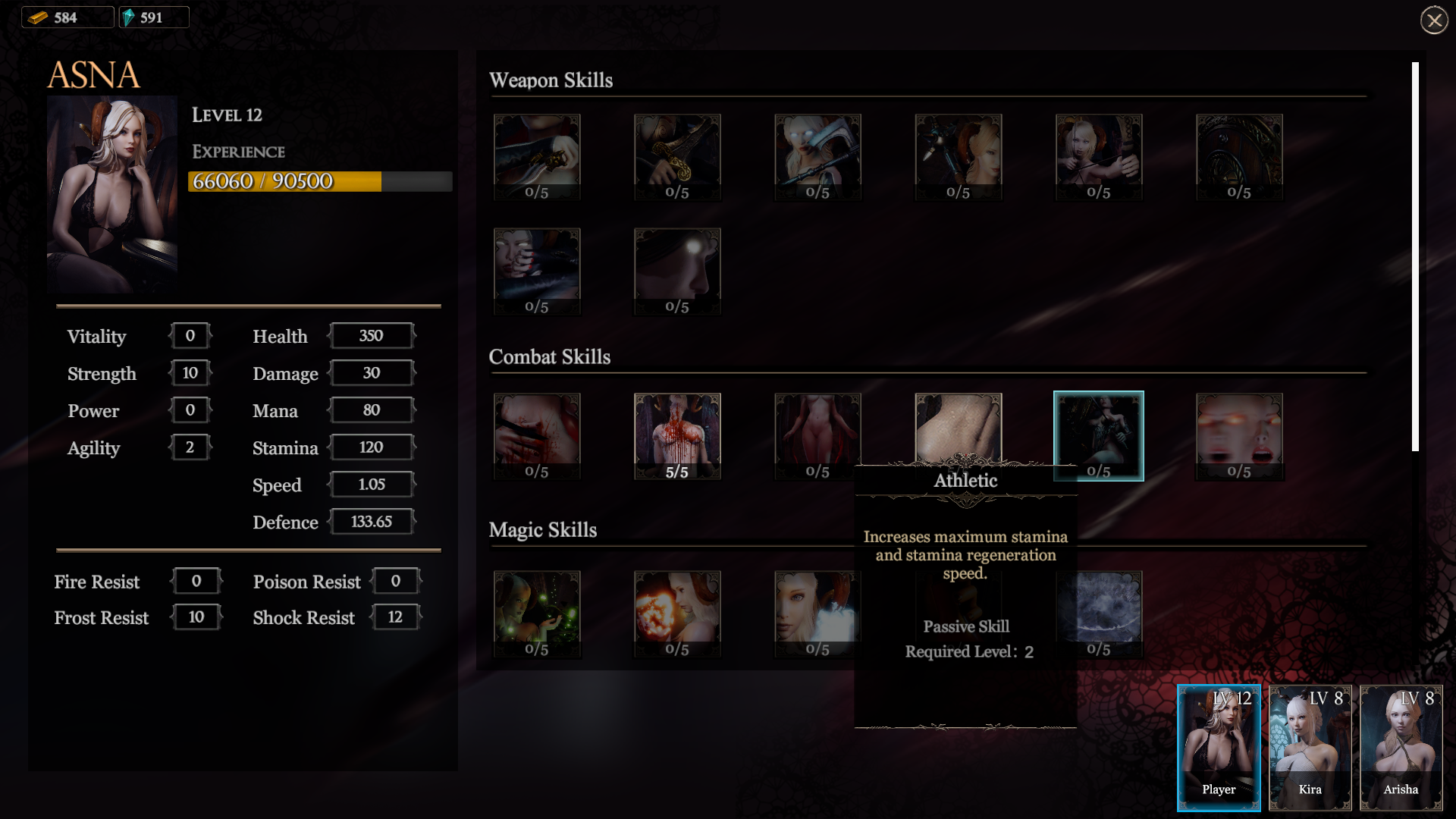 This is the one that's interchangeable with the previous phase, Scavenger. If after you read both and the reasons that I've put them in the order I have, you want to swap or even skip one or both, that's perfectly fine and won't effect your game-play in the least bit, as the game stands right now.

This one is short and sweet: "Athletic" literally just means you can attack more. It increases your total max stamina pool, and also increases its regen speed. None of which you need in the least bit, if you've made it to this point in the game...but it is icing on the cake, and can allow you to rack up a fairly impressive max hit combo count.

Time to move on to the final phase! 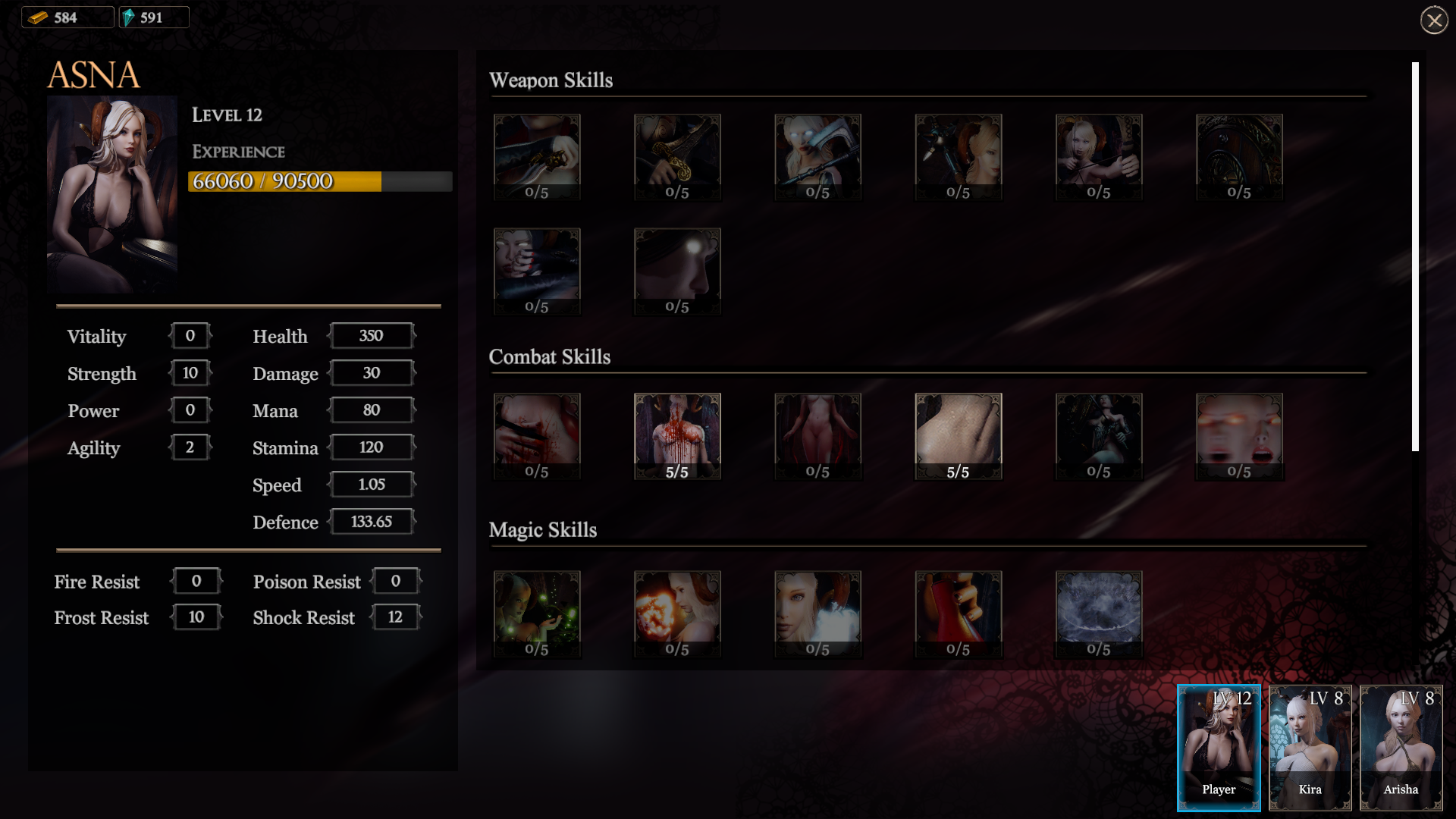 You'll notice that there is no skill highlighted in this screen. That's because this phase is all about boosting your DPS, so the entire top section of 'Weapon Skills" IS the next step! This is really just future insurance to help prepare for further content releases - level cap raises, new / harder mobs, DPS check bosses, etc.

This one is actually a bit more in depth than you'd expect, given the small scope of why I picked this section last. That's because it involves picking a specific weapon type to focus on, put skill points in, and keep an eye out for at the vendor in your palace.

Daggers are excellent starting weapons, and I highly recommend using them until maybe level 3.

Swords are just nerfed daggers, not really a fan and no justifiable reason to use them.

2h weapons are just bad, in my eyes. They're slow and clunky, and don't really do any more damage or aoe than their 1h counterparts. I died a LOT initially, thinking I could just cleave down groups of mobs because I had a giant 2h. Instead, your moveset just puts you into the middle of groups, where you get stunlocked before you can swing xD

Axes and clubs are pretty similar, both are good vs armor (though the blunts are better at that) and both have the same attack speed. Personally, a good mace is always my go-to choice. It does not have any disadvantage when used vs normal mobs, and it tears armored mobs apart. If you can get used to the "slow" attack speed rating, you'll come to love them too.

Bows are straight trash. Aiming is a bit wonky but doable, arrows drop often so ammo isn't really an issue...but damage is so low, even on a character specifically specced for pure archery, you can use half a quiver on just one or two mobs, and then you realize ten minutes have gone by and you would have farmed this zone twice if you'd been using a club instead.

Magic...........exists. The controls are impossibly odd to use, mana starvation is a huge issue, and the DPS to make up for it just isn't there. As a mage-type gamer, I'm really saddened by this, and hopefully it will be reworked in the future; but as of 6/28/21, I see zero reason to waste a single skill point into any of the spells.

And, that's that. Thank you for reading, and I hope it helps your journey to hoard the most pan- erm, to be the best succub- .....you know what, forget it. Let me know in the comments if you find other helpful additions to the build path!

More She Will Punish Them guilds