43 achievements. Everything can be earned as you progress; nothing is missable.

Completion time: ~35-40 hours when playing with others.

~ Awoken to a Nightmare.

~ Urgent Task: Complete a side quest

~ The Burdens We Bear: Complete "The Outrider's Legacy", this side quest has an achievement. Quest is located in Trench Town.

~ Squaretasking: Complete all side quests.

There are 25 quests, if you are missing one that is probably the secret quest called Forgotten Chapel.

Side quest locations devided per location:

- Wreckage Zone: 0 side quests, only hunter and wanted quests (see below).

- A Heart of Gold

- 0 side quests, only hunter and historian (see below).

- Canyon of the Grand Obelisk:

You must interact with 5 pillars to trigger this quest. Video for assistance (credit goes to its owner):

- Sins of our fathers

- The Caravel: 0 side quest, historian only (see below).

~ Patron of the Past: Complete the Historian questline.

Historian questline list: ~ Don't forget to talk to Madame Beauvoir after you completed these quests (she is located at Rift Town)

Wanted questline: ~ Don't forget to talk to Ujio after you complete these quests (located at

Hunter questline: ~ Don't forget to talk to Noah Dembele after you complete these quests (located at Trench Town).

~ A Gathering Storm: Unlock a class tree node, you will get this when you will spend your first class point at the skill tree.

~ Surpassing the Tempest: Master a branch of the class tree for any class, unlocks by adding skill points to the same branch/section of your characters class tree. Note: you can always reset the skill tree. 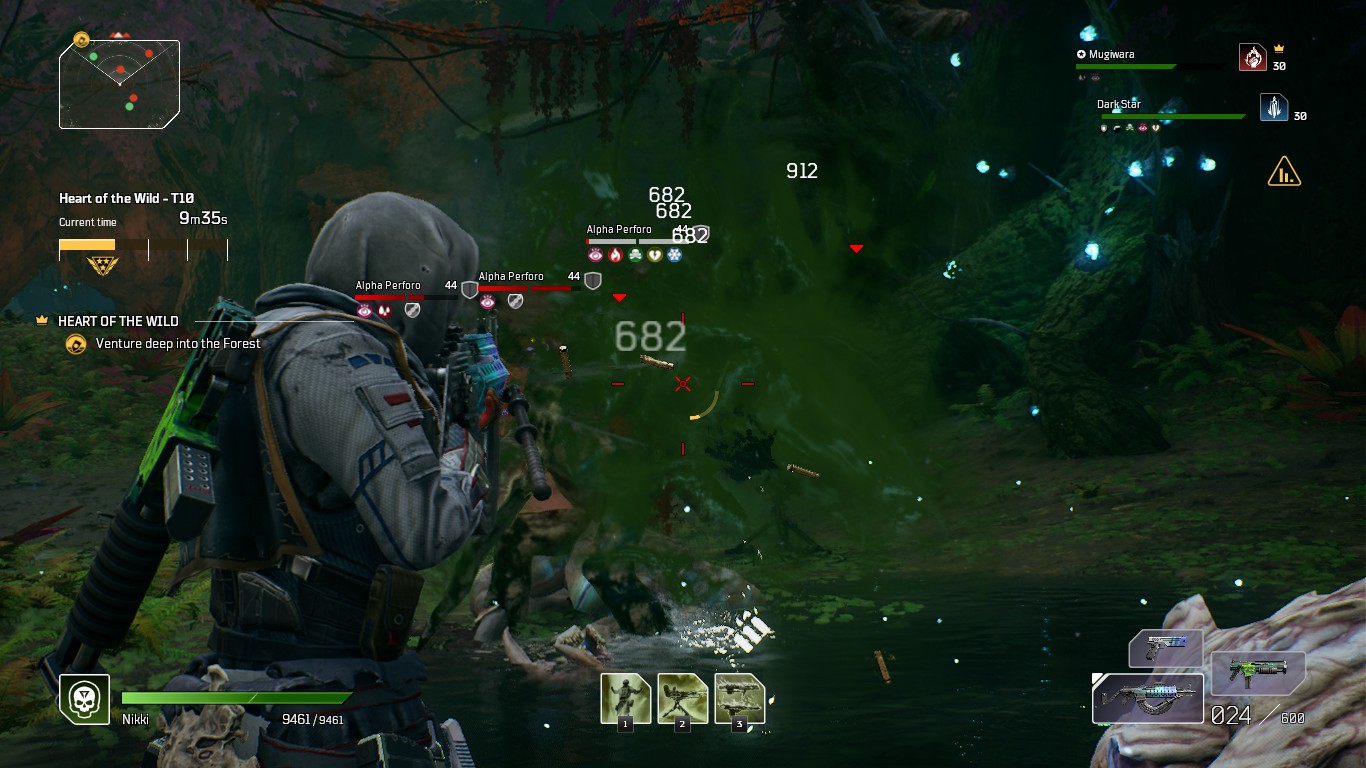 ~ Misfortune Loves Company: Kill 10 enemies with no more than 2 seconds between each kill, this is easier to do on small beasts since they always come close to you. If you have trouble with this, lower the world's tier ( open map [M], then press Z and choose tier 1)

~ Coup de Grace: Kill an enemy afflicted with at least 4 different status effects: easier to do with the combination of two skills and two weapons. Some status effect have slower duration, you can change mods at Dr. Zahedi. It can be done with coop partners too, but make sure you get the kill before the status effects disappear.

~ Clash of the Altered. Kill 5 Elites using skills only, can be boosted with a coop partner. Your partner can shoot them, you can finish them with your skill when they are low. The other method is lowering the world tier to level 1 and killing them with only skills. Elites are marked with red skull on the minimap.

~ Fistbump. Kill a total of 50 enemies with any melee skill: self explanatory, use F for melee

~ Hitting the Jackpot. Kill 1,000 enemies in Expeditions: expeditions unlock after completing the main story, just kill 1000 enemies for the achievement in this mode.

~ Hard Bargainer: Sell 300 items: you can sell items to vendors in towns or at Bailey (progress in the story for that).

~ True Potential: Use crafting to improve the rarity of 15 items: Talk to Dr. Zahedi and choose a green item (blue rarity works as well, but green costs less) -> then improve rarity option

~ Extreme Engineering: Use crafting to replace 10 item mods: Talk to Dr. Zahedi, choose a weapon/ armor with a skill, then click on mod gear and choose a different mod. Repeat this 10 times.

~ Spoils of War: Equip a Legendary item: you will get legendary items after some story missions, so don't worry about this one.

~ Legacy of Enoch: Equip a character with Epic or Legendary items only. Only purple and gold items count. Equip these in every slot. 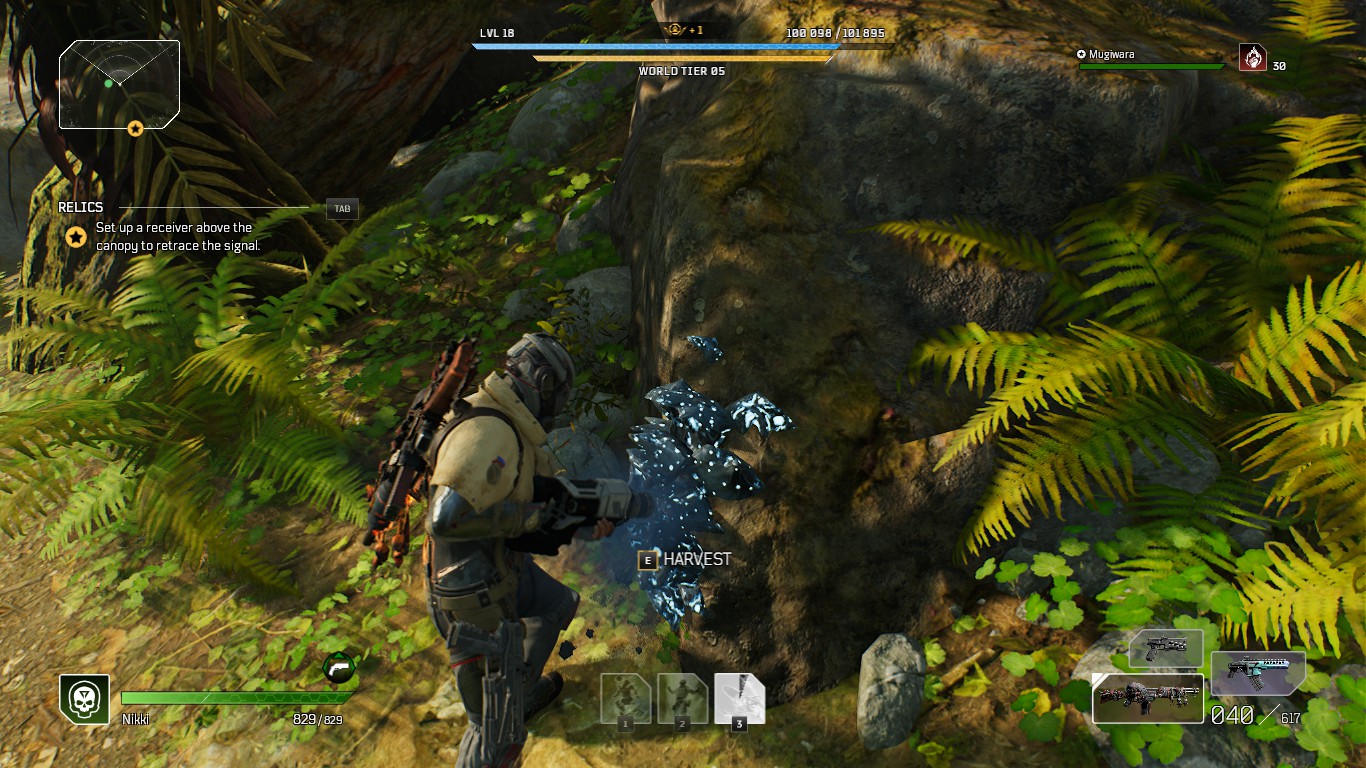 ~ Prospector: Mine ore from a deposit 30 times: you can mine on every location, look for these spots:

~ One for the Books: Fill in 300 journal pages. There is already a guide for this (credit goes to its owner): 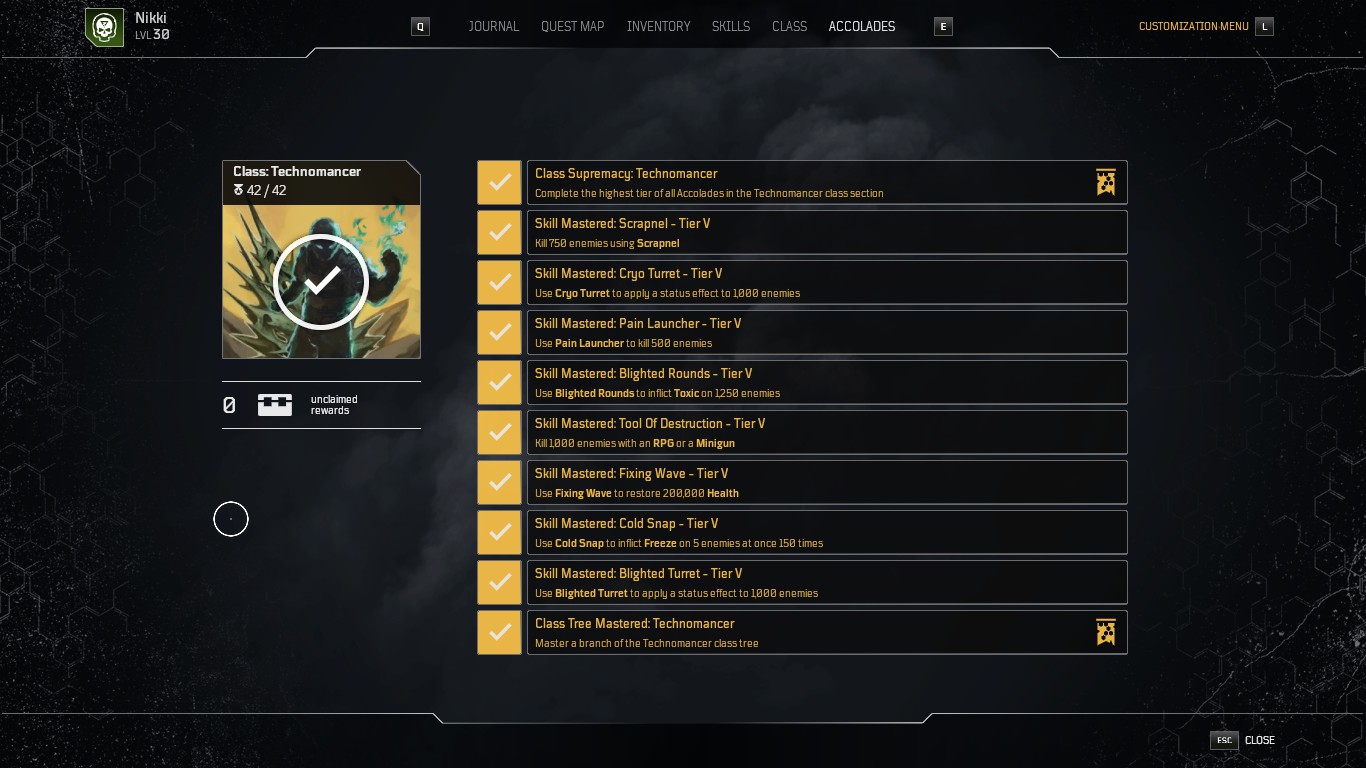 ~ Been There, Done That: Reach Accolade level 10.

~ Been Everywhere, Done It All: Reach Accolade level 20: Press I -> Accolades, on the right side you can see how many challenges you need to reach the next accolade level. This should come naturally as you work on other achievements. If not, we recommend grinding combat accolades.

~ Classy: Complete the highest tier of 4 class-related Accolades for any class. (see below)

~ Outrider, First Class: Complete all Accolades for any class. Press I -> accolades -> choose your class. 42 accolades belong to this, all skills have 5 tiers.

Suggestions for the grind:

1. First Town, set the world tier to 1 so enemies will die faster. Just follow the campaign's route. Video for assistance (credit goes to its owner): https://gamerdvr.com/gamer/colzoh/video/130970994

2. Solo expedition called Heart of the Wild, but anything works with beast enemies. Change the challenge tier to 1, you can get 150-200 kills within 20-25 minutes (this is recommended only if you have strong gear).

If you have any questions or suggestion, feel free to ask in the comments.