How to Defeat Specific Enemies 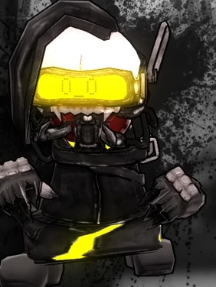 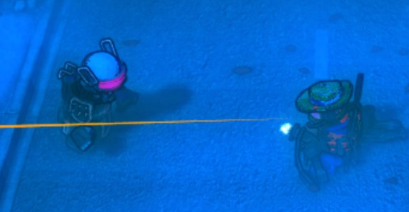 This will be about hard/annoying enemies encountered in Arena Mode and Story Mode.

I won't include bosses in this guide. I'm probably gonna do that in another guide. Detailing how to defeat them.

This man can be very dangerous if you are not prepared. With his dual tommy guns. He can easily destroy your corpus bars. (The is the guy with a white suit and hat with sunglasses, and dual tommy guns.)

1. Kill the enemies near him so they won't bother you.

2. Backtrack to a position where you can safely use the Charge-Up skill such as a corner and when he gets near, release ultimate power. (Example of a great corner in [The Goods] is the stairs where the truck leaves near a medical kit.)

A big agent and the little brother of the Mag agent. Your hirelings will cry in fear. (The is the guy with scars and cracks all over him, he is also bigger and has the same shades of the .)

1. Use throwable weapons such as Throwing Axes, and Throwing Javelins.

2. Grab weapons on the floor and throw it at the Half-Mag.

3. When you are at the back of the Half-Mag he does this slam attack that will hit his back. You can use the Charge-Up skill while he is doing that attack to knock him down.

4. A tactic I have been doing is going in circles and making him do the back slam. It gives you enough time to get some hits.

5. The Half-Mag's Charge-Up attack is very dangerous. He will dash in your direction ragdolling and knocking out everyone in his way doing high damage.

These evil idiots are basically, super strong zeds. If you are knocked out [If you have the blue circle above your head] The and the Bruiser can grapple and bite you. He revives 3 times before finally dying. If they die by fire or dissonance they will die immediately. (These are guys with yellow visors and black hair with a gaping mouth.)

1. Use Welding torches. Dual-wield them if possible.

3. They have a lunge attack and when it hits you, you go in a grapple mode like the Zed so be careful and dodge quickly.

Big brother of the . Still dangerous. It's like a Half-Mag but Vampire. (The is the size of a Half-Mag and has a pink visor.)

1. Unlike they're little brothers. They don't need to die by fire or dissonance to die right away.

2. When they do a rage animation and have a red angry face above them. They will charge very fast similarly to a Merczerker and when they hit you they will grapple and bite you.

3. Although he doesn't have the back slam like Half-Mag. He still has the Half-Mag Charge-Up attack.

4. It has mostly all of the attacks of the Half-Mag.

The brother of the Merczerker. Not really. But basically a more annoying stunlocker. (The has the same eye as the ATP Soldat but red and he has a red beret with red shoulder armor. He will always spawn with 2 Speclight weapons.)

1. The Counter Melee skill is very effective against these guys because their attacks are very predictable.

2. You can break his stunlock by using the Snap-Dodge skill.

Apparently. Everyone hates this guy. His annoying shield will make you want to die. (The has has a very distinct white helmet with a red visor. He will always spawn with a shock baton and a riot shield.)

1. The Dropkick skill is effective against this guy as it ignores his shield and throws him in the air.

2. You can also kick him which raises his shield for a few seconds.

3. The Counter Melee skill is also effective against him because his attacks are slow and also predictable.

4. Best time to attack is when he is swinging his baton because if you hit him while he is in that state. He will be stunlocked and you can just beat him up.

5. You can also Charge-Up attack him which will ignore his shield and fling him.

Super annoying guy. He can not only teleport, but he can't be countered. It is literally just a ghost . You can't even stunlock him. (The is a red ghost with an axe and viking helmet.)

1. The Dropkick skill is effective against this guy as it ignores his shield and throws him in the air.

2. You can also kick him which raises his shield for a few seconds.

2. You can also Charge-Up attack him which will ignore his shield and fling him.

Scary guy that teleports. He has 2 Corpus Bars, when you get him to his first Corpus Bar. He starts teleporting randomly. Unlike other GO3LMs, he doesn't need to be enraged to be killed. You can just stab and shoot him. He still very dangerous. (The has a very distinct white faceplate with 2 purple pupils with 2 large machetes.)

2. His rotation is really slow so I usually spin around him slashing him.

Note: For some reason. I was doing some testing in the Playground when I spawned in that had no machetes equiped. It was on his back.

He is annoying but you just slash him and he dies.

He is super annoying but although he is similar to the Apparition, he just teleports around and spits stuff. There is no tactic or tip for me to give.

He is super annoying but again. Just slash, dodge. And he die.

His hook seemed very scary and annoying. But I realized it really isn't, just pay attention and don't get near when he does that attack.

Well guys that's all for this guide. I'm gonna work on a guide about the Basic Info of Project Nexus.