Home Life is Strange: True Colors All Choices and Consequences

All Choices and Consequences

Officially, there are 6 different endings you can see, but these are slight variations on 2 core outcomes you can choose from when it comes to the close of chapter 5.

It's not always easy to determine what the best course of action is, so if you're stuck on some of the biggest Life is Strange: True Colors choices and you're wondering how it will affect the overall outcome of Alex's journey, you've come to the right place.

Below are the results of all the different Life is Strange: True Colors endings and some big choices you have to make. There are some minor choices that I didn't add that didn't affect the story endings and I couldn't upload the pictures in 4k quality. I will update the guide as soon as possible. If you see a mistake, let me know in comments.

Guide got help from the following sources: 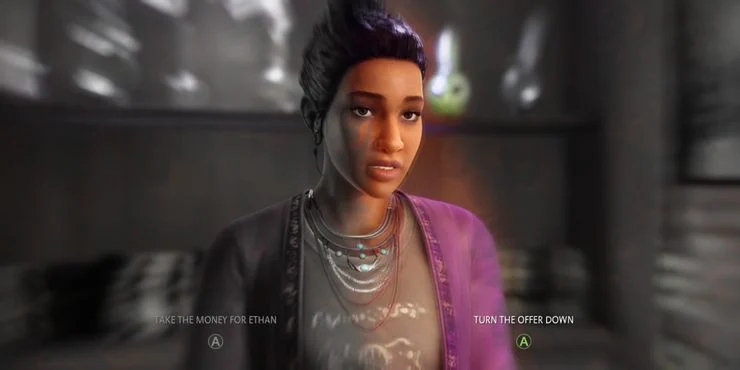 When visiting Charlotte in her dispensary during chapter 2, she reveals that she's been given an affidavit by the Typhon corporation. By signing it, she would agree not to press charges against the company for Gabe's death, and she'd receive plenty of money in the process.

Charlotte is hesitant to sign the morally questionable document, because she feels she would be betraying Gabe. On the other hand, the money they're offering her would be enough to send Ethan to college. So, she asks Alex to make the decision for her. The main consequence of this choice comes in the last chapter during the council meeting. If players convince Charlotte to sign the affidavit, she won't be able to back Alex up. 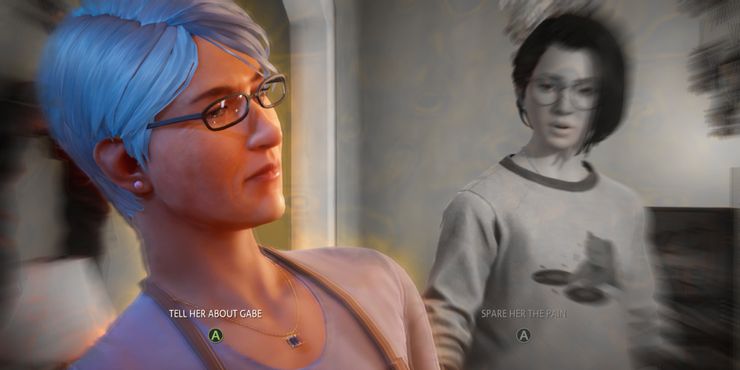 When Alex goes to the flower shop in chapter 2 to search for Mac, she discovers that Eleanor is suffering from memory loss. After players help the poor woman figure out what she was doing, Alex realizes that Eleanor doesn't remember that Gabe died. It's up to the player whether they give her the bad news or not.

If Alex does reveal Gabe's fate, Eleanor is devastated, especially because she missed the wake. However, it does allow her to be there for the tribute on the bridge.

If Alex doesn't inform Eleanor, the latter misses the heartfelt event. Plus, Riley ends up finding out about Eleanor's illness, which means she doesn't go away to college. Finally, Eleanor doesn't help Alex at the council meeting.

Call Mac Down Or Walk Away 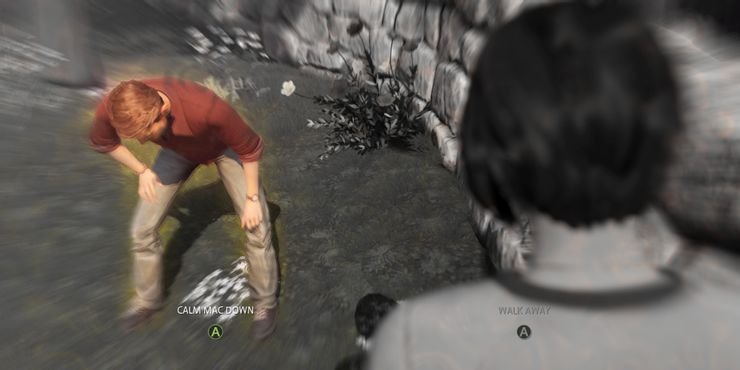 Towards the end of the second chapter, Alex uses her power to extract information from Mac about Gabe's death. Players learn that he wasn't really at fault, and he tried to stop the blast in the mine. However, the man does cover for his employers, out of fear that they'll take him out. By the end, he starts to have a panic attack, and Alex is the only one around who can help.

If players choose to calm him down, Mac sticks around in Haven and seems to improve as a person. Alternatively, by choosing to walk away, Mac leaves town forever. 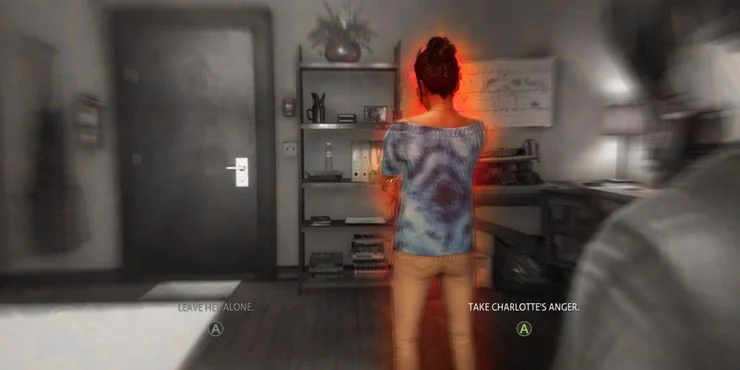 At the close of chapter 3, you'll have to decide whether you take away Charlotte's intense anger or leave her alone. Of course, there are no right or wrong answers here, but what you decide will impact Charlotte in different ways and slightly alter what happens later on in chapter 5.

Take away Charlotte's anger: Alex will take on Charlotte's anger, which leads to Alex having an angry outburst in front of Steph and Ryan shortly after. Because of this, Steph and Ryan will leave the apartment and you'll investigate the USB on your own. During the festival in chapter 4, you'll meet Charlotte, who tells you she will feel numb before leaving. Later on, she won't stand up for you during the final confrontation during town council meeting in chapter 5.

Leave her alone: On your way out of the room, you can apologize or offer reassurance that everything's going to be okay. Afterwards, Alex doesn't have an outburst and Ryan and Steph will stay with you as you look through the USB and offer their thoughts. When you see Char during the festival, you share a moment by the river where she apologizes for being horrible and later stands up for you in Chapter 5. 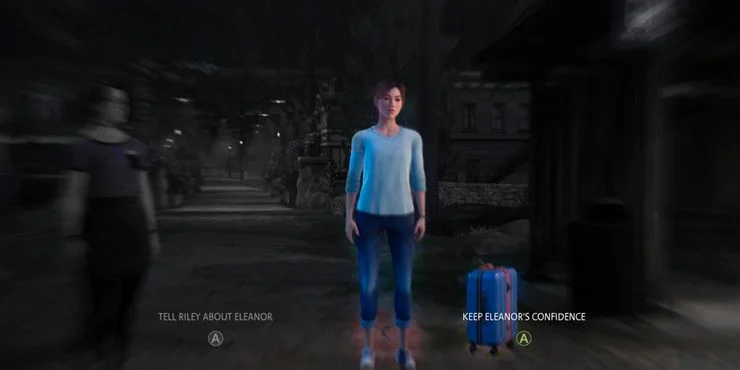 One of the game's best-hidden major choices comes during the Spring Festival in chapter 4. During chapter 4, you can discover that Riley is at the bus stop after looking into the emotions of Eleanor at the festival. If you go to the bus stop and speak with Riley, you'll have to decide whether you tell her about Eleanor's condition or not. Eleanor doesn't want Riley to know since she wants to stop her from pursuing her dreams outside of Haven, so it's a tough choice to make.

Tell Riley about Eleanor: If you tell Riley about Eleanor's condition at the bus stop, Riley will decide to stay in Haven to be with her. Outside of Riley's circumstances, the major outcome of this choice is that Eleanor won't stand up for you during the town council meeting in chapter 5, and Alex will be hurt by it.

Keep Eleanor's confidence: If you keep Eleanor's condition a secret, Riley will leave Haven to pursue her aspirations outside of the town. Eleanor will speak up for you during the meeting in chapter 5, and say that you're trustworthy. 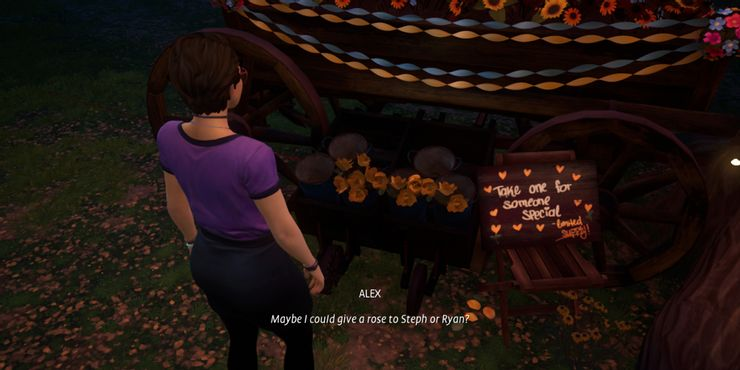 Alex joins Life Is Strange's long list of LGBTQ+ characters, as she's willing to romance either Steph or Ryan. During chapter four's Spring Festival, players can pick up a rose and give it to either of the two characters. Whoever they hand it to will invite them up to the roof later, which will create the opportunity to lock in that romance.

If players go through with it, their choice of partner will end up with Alex at the end of the game. Alternatively, players can decide to leave the roses alone and finish the game single. 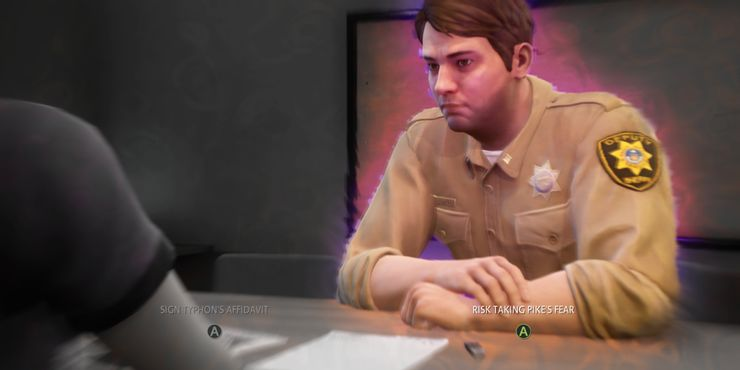 In chapter 4, Pike will take you into custody as a result of the evidence you discovered by taking the USB. Here, Pike asks you to sign an affidavit stating that you won't pursue Typhon further and let go of the evidence you found. Alex can sense Pike's fear about Typhon, and it's here that you can decide whether you sign the affidavit, or continue to resist by taking away Pike's fear.

Sign the affidavit: If you sign the affidavit, the story will still go in the same direction, but the only difference is Pike will be too afraid to confirm what you're saying during the town council meeting.

Risk taking Pike's fear: If you do remove his fear, Pike will speak up for you later on. There are subtle differences in the following scenes, too, such changes in dialogue and Alex's frame of mind immediately after the house. 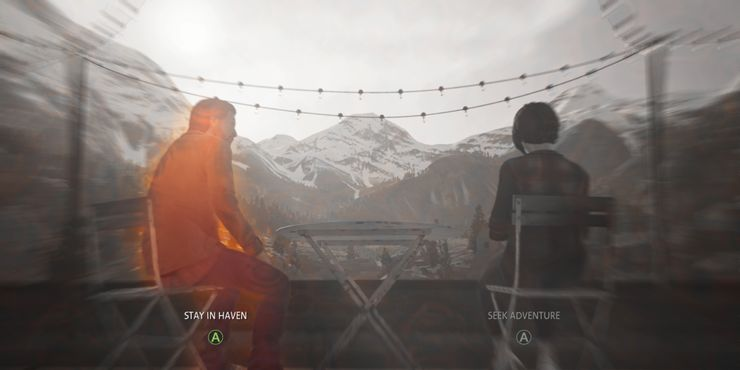 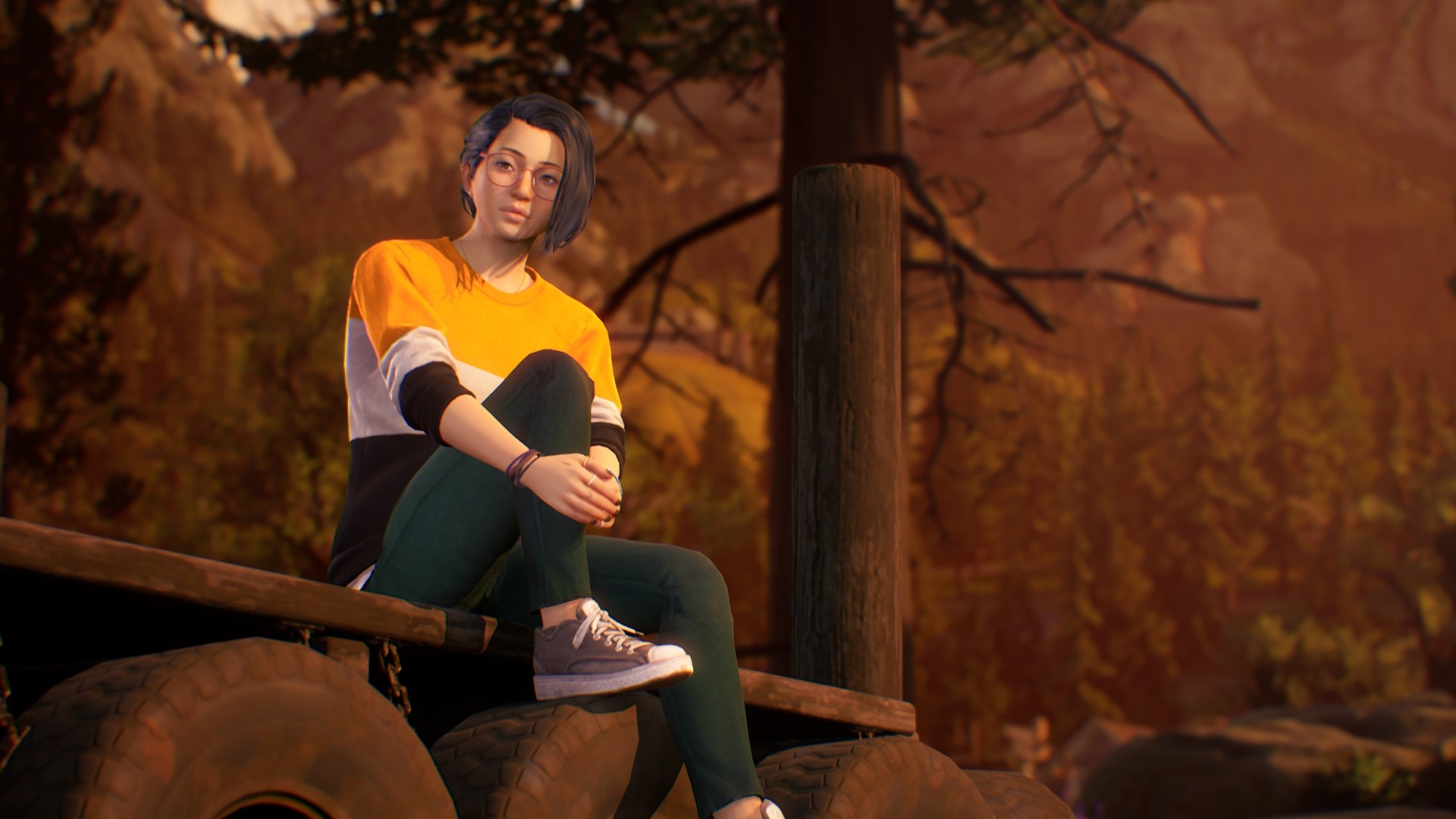 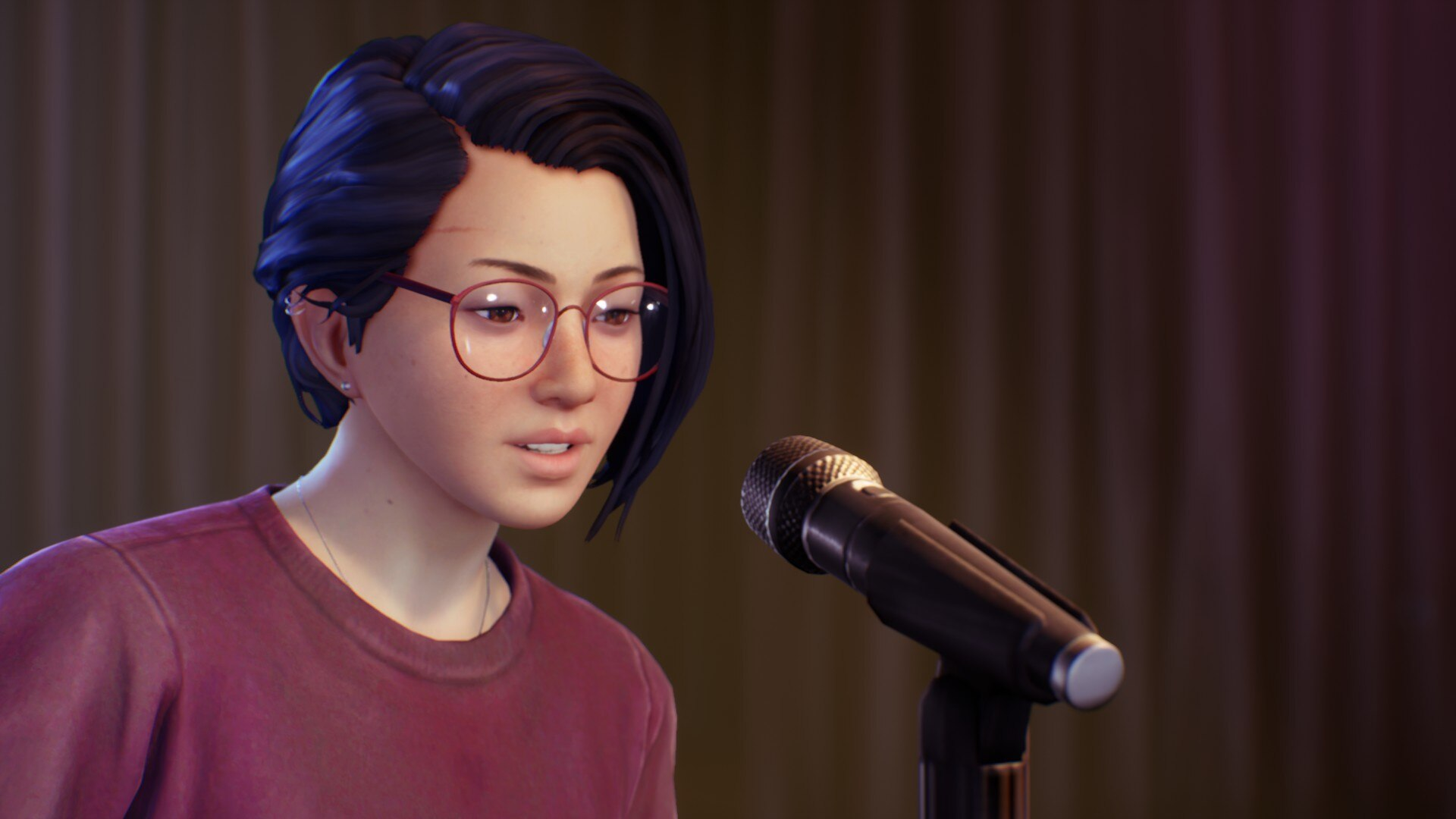 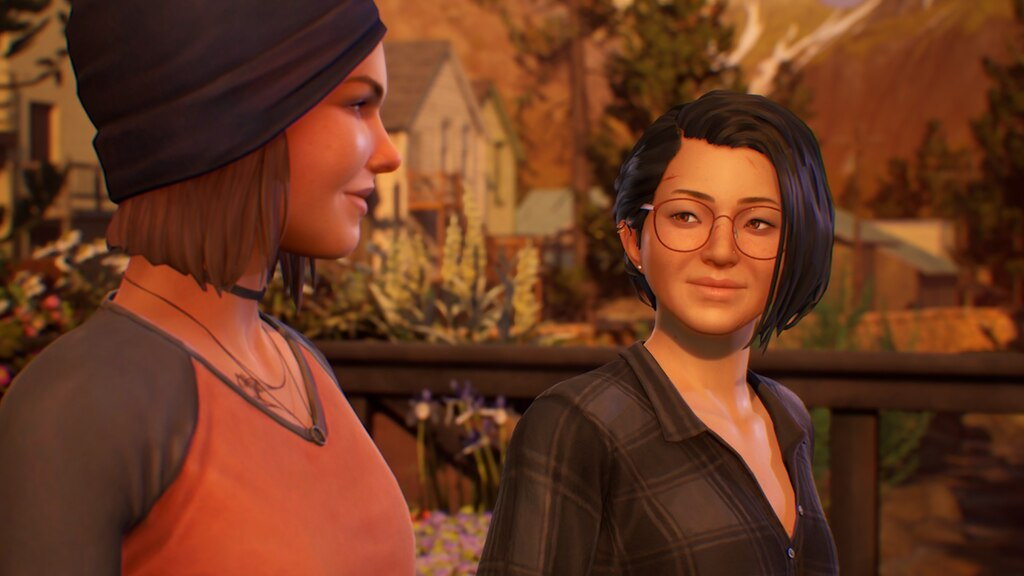 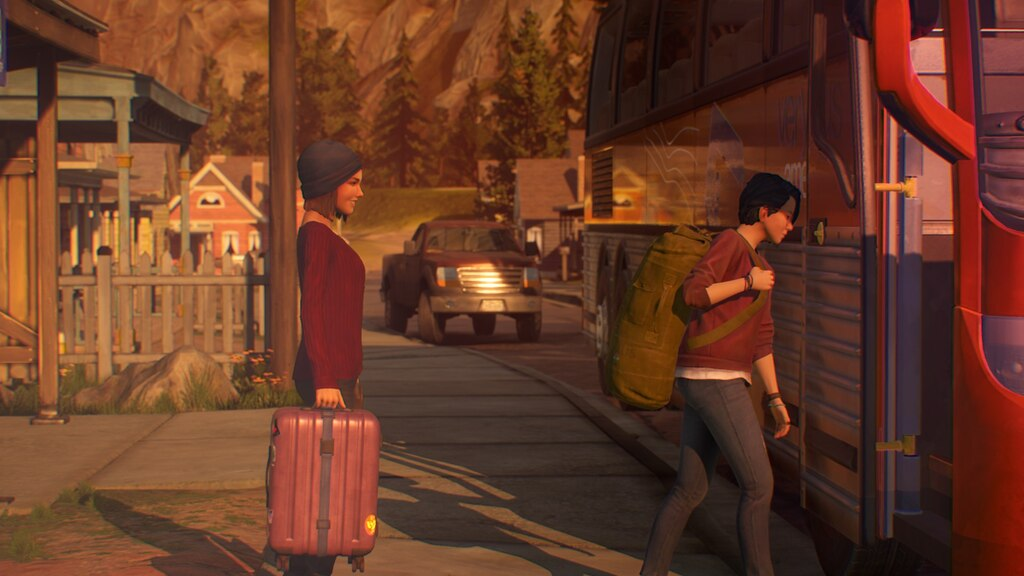 The Life is Strange: True Colors endings hinge on 2 choices: whether to stay in Haven and build a life there, or seek adventure and leave the town. While these are the two main outcomes, they can vary slightly depending on some of the above choices, as well as if you decide to establish a romantic relationship with Steph or Ryan in chapter 4.

Below are all of the endings you can get in Life is Strange: True Colors.

You stay in Haven and start to build a life for yourself in the town. Steph decides to leave Haven and hands over the record store to you.

You leave Haven and pursue a music career. If you kept Eleanor's confidence, didn't take Charlotte's anger, and you removed Pike's fear, all of them will be at the bus stop to see you off. If you made the alternative choices, they won't be there.

If you formed a romantic relationship with Ryan on the rooftop, he can feature in the ending. with Ryan: You stay in Haven with Ryan. Steph will still leave and hand over the record store. You'll see the pair share moments together as they build a life in the town.

with Ryan: Just like before, if you leave Haven you'll set off to peruse your music. Only this time, Ryan will go with you. On stage you'll get a text from him showing his support and photos of him will be in your guitar case.

Likewise, if you establish a romantic relationship with Steph on the rooftop, she can also be with you if you stay or leave. with Steph: If you stay in Haven, Steph will stay with you and you'll work in the record shop together. Here you'll see them share moments together.

with Steph: If you leave, Steph will go with you as you pursue your music career. Steph will also send you a supportive text before your show and her photos can be seen in your guitar case.