How To Complete Nightfall: Survey

This prospect is at the end of the tree for Olympus.

Also this prospect will take time because of you going

to every single part of Olympus to do something.

Lastly, I got the map without the lines but with the

How To Complete Prospect 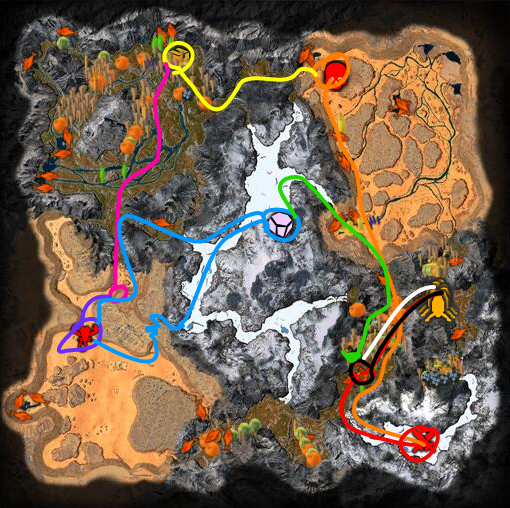 How To Complete The Prospect

First you start at the drop ship and go to

After that you go to the southern glaciers and

Then you go to the desert canyons and

Next you go to the river lands and get the prototype

Afterwards you go to the circled destination

for a cave to get ready at. (Pink Line)

Then if you are ready, go to the Scorpion

Boss and kill it. (Purple Line)

Next you go into the arctic and get the

scanner and put the Geo-Crystals in

and the prototype battery. (Green Line)

You activate the scanner and go

back to you drop ship. (White Line)

until it dies because of it not dealing that much damage.

the mouth when open to do extra damage.

hedgehogs to kill it and dodge the charging attacks because it would likely kill you.

from the crashed drop ship, Geo-Crystals, or scanning.

I would prefer this prospect on normal with nothing added because of the bosses.

you would be left with about 50 Geo-Crystals, plus you start off with 100.

Lastly, there are two blues lines because that cave you

can get ready in leads to the arctic and the other one does too.

But I would rather go into the caves into the arctic but you can go another way.

Now you have extra tech you have time for mining exotics.

I would prefer getting the tier 3 radar instead of getting composites.

There can be 3 exotic deposits but there is 6 possible locations.

1 in the southern glaciers and 1 in the desert canyons.

To get the exact locations because they are not on this map,

go to https://www.icarusintel.com go under filters

and select Nightfall: Survey to see them with number of exotics

mined and extractors can be used on it and other information.