Home HighFleet [v1.13b] How to effectively deal with any AP shells from enemies

[v1.13b] How to effectively deal with any AP shells from enemies 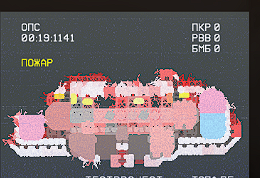 The main reason why AP are so powerful is that it explode ammo-boxes and deal damage around it. Generally, even experienced players, place ammo-boxes very close, hoping a lot of armor under them is enough and there is the case where AP pass all armor and explode one ammo-box, which trigger to explode others and kill all ship with cabin.

You can watch a video how I lost my ship and ♥♥♥♥ before, with three layers of armor up because of just two AP rounds which hit my ship from above:

What you should to do:

1) Use only small ammo-boxes instead of big ones, because big ones has double damage(150) and much more range(one big tile around it), while small ammo-box has only range in one small tile.

2) According to small ammo-boxes range explosion(one small tile) place them with offset of one tile, so they cant hit each-others and other important modules

3) Small ammo-box has AP resist as two layers of armor(3000 density while armor 1500) and can survive one AP hit, so you can use them as extra protection for your cabin, because cabin will be still vulnerable to AP shots.

My modified ship design according to my instruction:

My results in stress-fighting(successfuly) with three Sevastopols-like ships and four Archangels/Griphons, I won and ship still can fly and fight:

As you can see most armor destroyed and AP shots destroyed three of my ammo-boxes, which still was behind 1-3 layers of armor but ship still functional and cabin not damaged(possibly ammo-boxes has blocked some shots directed to cabin) what means design is good and balanced perfectly, because you want to lost all armor before die, right?

Thanks to Prolbo we now mostly sure that part density has no any effect on AP shells penetration, BUT other info are still very useful to mitigate AP-shells OP issue, so with a little bit redesign you can dramatically increase your ship survivability against AP shells, which tested perfectly.

1) AP rounds calculating penetration based on blocks density and they can pass blocks without destroying them!

3) Density of small ammo-box is 3000, while density of big ammo-box is only 800(!). This is why its good for extra protection cabin

4) 180mm AP can penetrate 4 layers of armor and still deal some damage to modules. Only 5 layers block it fully.

5) Density of hull parts and most other parts are 0 or close to 0 Hull parts has almost no effect on AP shells penetration in compare with armor. Someone tested it can pass freely 15+ hull parts or something like this, so dont try to hide your ammo-boxes behind a lot of hull parts and other modules and hoping it will protect. It will not, so better place them above, just under armor, to protect less explosive and more important parts. You will lost ammo-box anyway in case if AP will hit your ship most likely, just lose it with mind!

6) ADS Palash in any amount are not able to destroy AP shells(was tested by one guy, 15x Palash does not block AP shots)