Welcome. First off, let's start with the FAQs when I blind someone with the sheer size of my IQ and my genitals when I tell them that I use a Steam controller:

Is this a joke?

Do you actually use a Steam controller for fighters?

Yes, and I've been playing fighters with it for ~3 years.

What is wrong with you?

You can do anything with the Steam controller, the only limit is your imagination.

How long did it take for you to get used to it?

About a week or two.

Aren't trackpads too unresponsive and imprecise for fighting games, which "require" "precision"?

No, but you have to configure everything yourself. These things are precise enough to be used as a mouse. I will concede that it starts misbehaving every ~150 matches or so and requires re-calibration, but it's no biggie.

Is it worth spending $200+ on Ebay/Amazon to get a Steam Controller over a fancy Fightstick/Hitbox?

Why use a Trackpad?When you started out playing fighters with a generic gamepad, have you ever thought, "damn, analogue stick sucks Donkey Dong 64, but D-pad is too clicky."? Have you ever played a technically demanding/input heavy character, and your joints felt like the type of CBT that involves Chicago - Old Days? Are you the type of person that tries to play Counter Strike with a steering wheel? If so, welcome to the world's greatest bad controller. Think of it as everything the stick WANTS to be.

There is no effort required to gently place the tip of your thumb on a piece of plastic and slide it around. Playing something like Goldlewis Dickinson or Naoto Blazblue for hours can be hell on your hands if you're playing with more stiff input methods. It is also very easy to double tap.

That's right! The Steam controller has buttons on the back of the controller. The Steam deck has two sets of them. Multitask with ease, while still having the ergonomics of a controller.

This will be explained further in the guide, but you can do more with these trackpads than just an alternative D-pad. Also, if you've ever been bothered by small things, like vertical sensitivty being a bit too high, or there's not enough tactile feedback, you can spend however long you like fine-tuning.

If you have ever wanted to inform everybody that you are well-endowed without getting put on a national registry, there is no greater way than using the most unorthodox controller imaginable. Roll up to your friends and inflict the feelings of arousal and eldritch horror upon them as you body them with the shiniest turd.

If you didn't get a Steam controller during the clearance sale, or you're still on the Steam Deck waitlist, you're ♥♥♥♥ out of luck. Steam Controllers are discontinued (volvo pls give SC 2.0), so unless if you can snag one from a buddy, you're probably gonna have to dish out more money than it's worth. Nobody uses these things as well, so there is not much you can do if you encounter technical difficulties.

I can't speak for the Steam Deck, but the pad clicks, the bumpers, and (to an extent) the back paddles are incredibly stiff. You're going to end up developing a case of gorilla hands in the long term.

This thing is NOT plug n' play. You can not use custom profiles on consoles, and you're going to look like a clown if you bring this away from home and spend 10 minutes messing around with sliders. The Steam controller is supposed to save profiles for when you do plug it into another PC, but it's unreliable and buggy. It is theoretically possible to modify the firmware to have the settings you want in lizard mode, but you're on your own on how to figure it out.

Using a trackpad for fighters will likely feel foreign, and you're going to have a lot of trouble starting out. If you don't want to spend about a week or so getting used to something you might like, this is probably not the controller for you.

This controller is incredibly loud. You can't hide it along with a miniature TV in your trenchcoat during your grandmother's funeral like you could with a fightstick. When you press a button, everyone and their grandmother 6 feet under will know that you're using this. 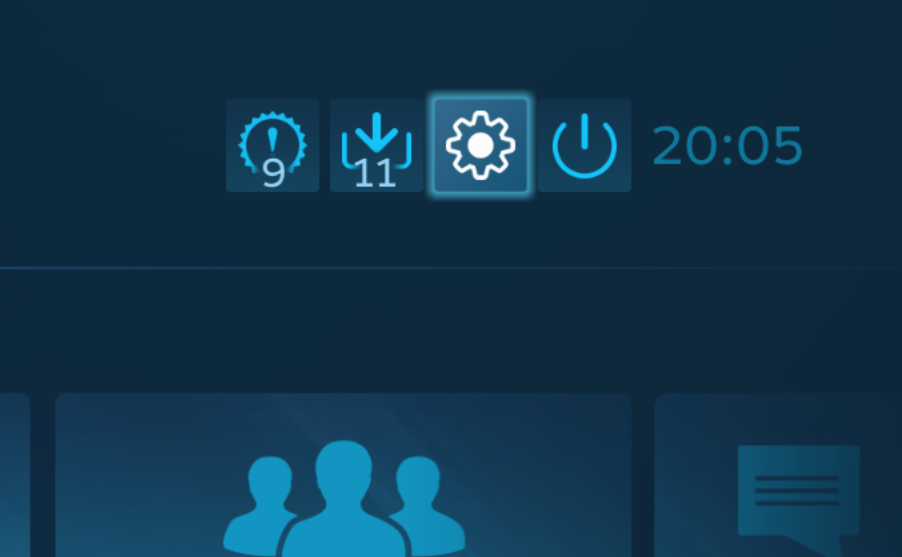 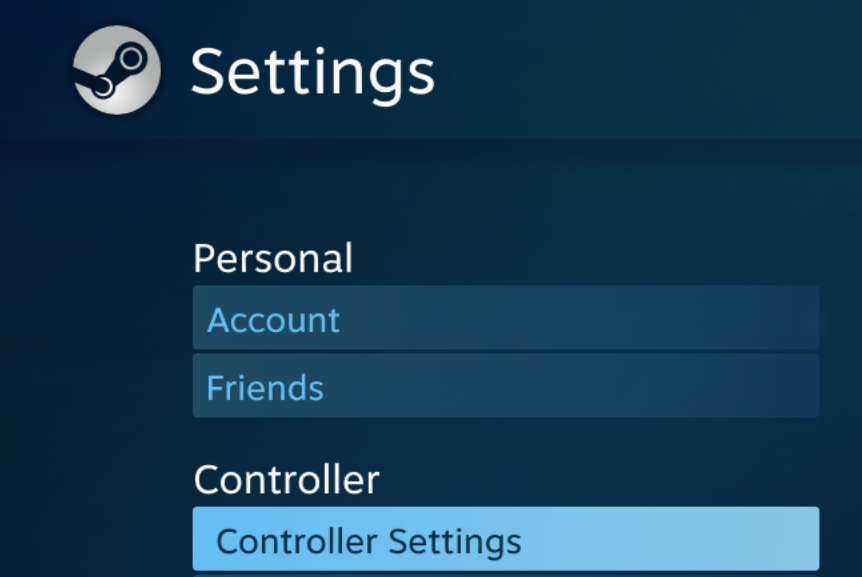 The first thing you're gonna want to do is to get acquainted with steam's controller settings. If your controller is detected, it should be on the row below the play button. Alternatively, you can find it on the top right in the Steam overlay.

Now, what you're probably going to notice is that the UI sucks. There are a lot of settings for the trackpad you can choose from, but what I've found best is the D-pad. I strongly recommend turning off "Requires Click." You can get by with the analogue stick setting, but I do not recommend it because it tends to have conflicts with existing code in the game, like debouncing.

Deadzones and Overlap region are explained in the UI, but the goldilocks zone can be found around 5 clicks away from the slider defaults. Haptics are entirely up to personal preference, and it's basically using eldritch vibrations to emulate the feeling of clicking a D-pad. If you do not want to bother tweaking your sliders all day, then change the layout to Cross Gate and it works just fine.

You can assign various functions to the Trackpad click. I personally have mine set to Faultless Defense, but I have also used a dash or grab in the past. If you want to get really crazy, you may want to get comfortable with the Activator settings, Mode Shifting, and Action Layers.

WARNING: Macros like blatant auto-commands (quarter-circles and the like), auto-combos, and turbos are frowned upon, and in some cases they can be considered cheating. Try to keep it clean, and don't be lazy.

Where to find these settings:The UI has an explanation for what everything does, so I'm not going to bother typing it. I will show you where to find them because the UI does in fact suck.

When you assign a bind, it's on the bottom right. I did not know this existed for a very long time.

It can be found on the top right on the Trackpad settings. You can apply mode shifts to different buttons like the bumpers as well, but you can't mode shift everything.

It is on the top of the main menu. The difference between them is that one drops inputs when applied, and the other doesn't. I don't remember which is which. This is useful if you want different control set-ups for different characters.

What's this funny looking symbol below the controller?

If you see that symbol, that means your controller supports literal motion controls and you can enable it. For the love of all that is holy, please don't play Guilty Gear with motion controls.

Some Examples:You can do anything with the Steam controller. The only limit is your imagination. Do take note that a lot of games don't play nice when you mix and match keyboard + controller buttons.

When you're not quite familiar yet with where your diagonals end, and you're crouch-blocking, it can be rough trying to input back and dash/grab with such a large trackpad. Personally, I am a true Trackpad Chad, so I have no need for this. Create a dual-bind on the left and right regions with your direction + your button. Some games can get screwy with this, so you might want to put a small delay between the buttons in the activator settings.

Similar to the previous one, but if the pad's size gives you trouble dash-blocking, doing charge inputs, or you want to pretend that you're good at footsies, you can invert the horizontals on click. I like doing left-right charge inputs this way because it has more feedback. Alternatively, you can create a mode shift to a completely blank pad if lifting your finger for neutral inputs feels uncomfortable.

Don't neglect the second trackpad. If you're a butter-churnin', paint-chuggin' Potemkin main, but plinking feels awful with just a thumb, try this out. This is an experiment, so I recommend just binding K to one of your triggers if you don't like this (be sure to check out how you can customize your triggers as well). Tapping the pad inputs K, and clicking down inputs a button depending on the region. Just quickly press down on the pad to plink, or if you're buffering a 6K mid-string, place your thumb and click at the right time.

I don't quite have radial menus figured out, so I can't quite help you there, sorry. However, I do know that they do exist, and you can have it display a radial menu in-game (I think display requires big picture mode unfortunately). I am planning on having a radial menu on my right pad for quality-of-life training mode buttons and macros in the future. There is considerable input delay, so don't get the stupid idea of using this for your buttons.

RecalibrationThese trackpads aren't perfect, and sometimes they misbehave, so you'll have to re-calibrate every now and then. If anyone knows how to do this without big picture mode, please let me know. 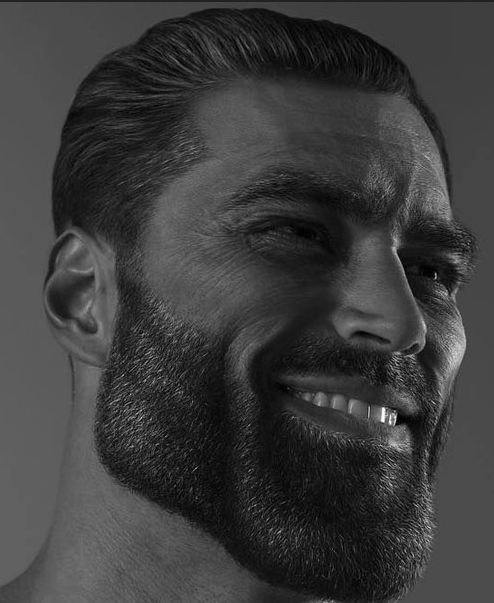 If you want to add anything useful, have any questions, or you want to express some personal grievances regarding my prolonged life after seeing this, feel free to let me know in the comments. Otherwise, I hope you found this helpful, and that you have fun.