Guide for the Various Story Routes for Scars of Summer

Key Board controls Q This will bring up your phone so you can either call Ryoka, who might answer and give you clues where she might be, or look up lewd threads on a forum (mostly about Ryoka). You can only use this 3 times a day unless you buy chargers.

W - This will bring up the calendar. Use this to check the day and upcoming events

A - Teleport you back in front of your house.

C - This will close Ryoka's diary which you use to watch h-scenes. Note that to watch the H-scenes you must click the heart icon in Ryoka's Diary

Z and Space - Confirm choices, interact with objects, and move to the next dialog. Hold Z for a faster move through dialog

X - Deny choices/choose the 2nd option for choices and pull up the menu.

Arrow Keys - Move the character around.

Otherwise you can just use your mouse move around by click on where you want the character to go.

Also note: Moving into and out of a building can forward time by 25 minutes.

Protagonist Keita: Main Character and who you will be playing as. Heroines Ryoka: The main Heroine of this game and childhood friend to Keita

Saki: The elder sister to the main heroine and guardian to Keita while he's staying with themAntagonists Oyama: A dirty old man who lives in the village in a house to the right of the town hall.

Masaru: A wimpy guy who is the other childhood friend to Keita and Ryoka. He works at the bathhouse just below the town hall.

Nobuo: A spoiled rich kid who lives in the mansion to the upper right exit of your home. Usually found around the tent to the upper left exit of the village.

Daisuke: A loud, dumb, and muscular employee from the video store in town (building to the upper right)

Vagrant: Homeless guy who lives in the slums in the park downtown. You got to take the train

Introductions to the routes.To trigger the route for one of the antagonists you must interact with the characters with the exclamation marks (!) above their head. Most of the time these (!) will only appear while Ryoka is with you. I'll go over more on triggering start each route later on. The H-events for each route seem to overwrite other route H-events. At time it seem random which route H-events will trigger when playing a game where multiple antagonists' routes are triggered. I recommend only triggering 1 character route and then proceeding with his route until you hit the point when they first sleep with Ryoka, afterward it seem like that route will have precedence over other routes events. But again it kind of random so you may want to just trigger 1 route at a time if you want to see all the events for that route. Note you can trigger all of Saki routes without any worry because she's on a fix schedule so it easy to predict when each of her events will take place.

Final Note: I won't go step by step into each event. Just a general overview of getting the route started and a few tips for the part where the game don't tell you where to look or go. 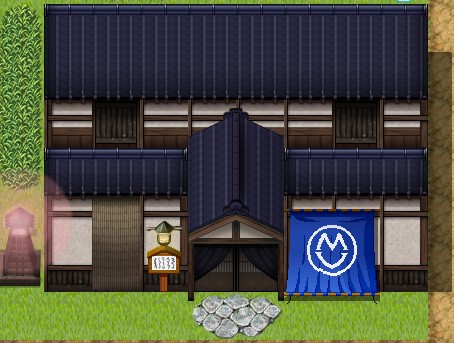 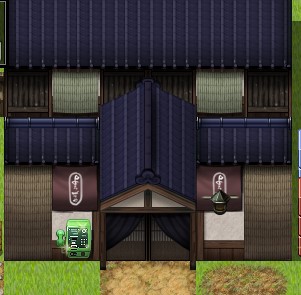 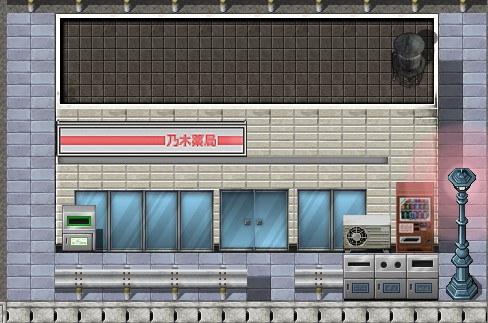 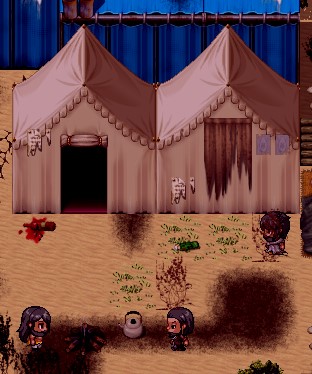 Saki has 3 routes and you will see her scene as soon as you interact with the pink hearts for her scene. The main character must be alone to get to view the scene for Saki. The schedule for these routes is posted on the cabinet next to the fridge in the kitchen of Ryoka's house

Monday and Saturday: To start this route you need to visit the town hall and interact with Saki (!) on days she's working. Do this 2 times. On the 3rd time you enter the building on a day she's working, she will be in the large empty room surrounded by a bunch of men (on the right side), just interact with the door and you'll initiate the scene. After a couple of time the door will be lock, simply head to the bathroom on the right and you'll be able to interact with the (!) to climb up and peak on her from above. 4 H-scenes over all.

Tuesday and Thursday: To start this route you just need to visit the shop (last house on the upper left, Just before you get to the bridge leading out of the left side of village). Just talk to the old man behind the desk and he'll has for an item. Most item are at the convenient store in town.

The last item (Bride Stealer) can only be bought by the hooded figure in Downtown (He's on the far right, same pathway to get to the love hotel and mixer bar).

Once you have given the item simply wait until 2 PM so that the two of them go up stair and the pink heart appears. Overall 3 H-scenes.

Wednesday and Sunday: To start this route you need to go downtown. Then go to the exam-prep facility at the south of Downtown and past the Vagrant. In the park/slum, talk to the homeless guy that's next to Saki with the (!) on him. Do this 2 times. After that there will be a scene the next time you visit them outside, after which the heart will keep appearing on the tent to the right. Lastly, you can also find a photo left outside the homeless shelter at the upper right of the park slum. You got press Z to interact with it. 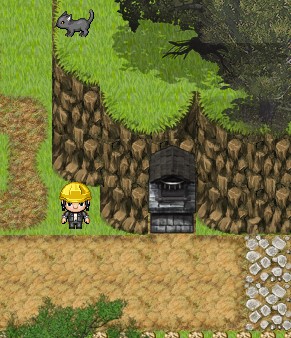 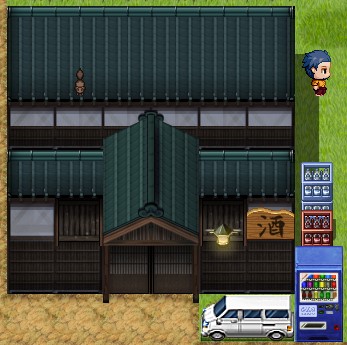 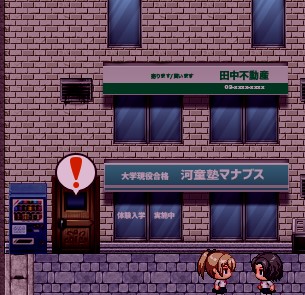 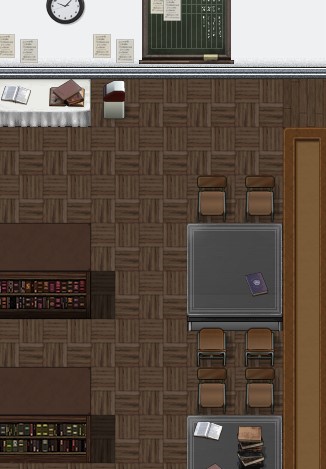 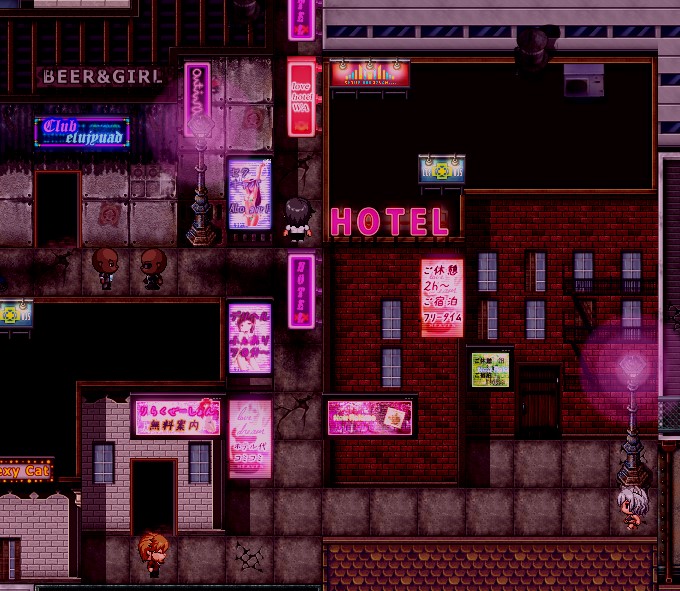 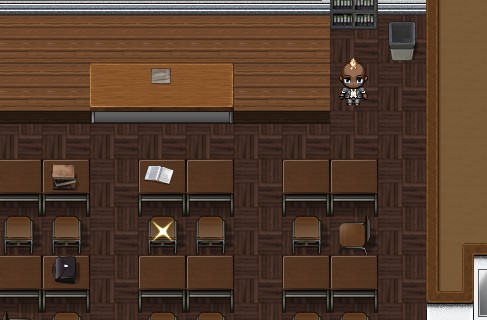 Normal Ending: Simply don't complete any of the routes.

Happy True Love Ending: Don't start any of the other routes and get Ryoka memories. Basically by going to the Cave, Storehouse, Mountains, and then Summered Colored beach. Go through the crystal until you reach the sparkling spot to trigger Ryoka Memory. Each location will appear as you complete the previous. Then simply reach the end of the summer and confess to Ryoka during the class trip.

Oyama: He will have a (!) on him in his hut. Talk to him with Ryoka with you. Next you need to talk to the mayor/village chief. He's in the town center in the room down the hallway. He should also have a (!) on him. After that you should occasionally see Ryoka and Oyama together next to his hut, or a (!) on the ground close to the hut which will trigger a scene of Ryoka going into the old man's hut.

Masaru: You need to have Ryoka with you when you go to the bath house. He will have an (!) on him. Next go to school and overhear some girls talking about bullying, I believe you need Ryoka with you so you can trigger this. Then just go home and it will unlock a memory scene of Ryoka assisting Masaru while being bullied by those girls. After that you will trigger one scene with them in the bath house. From there most of their scenes will mostly happen to the bottom right exit where there will be a fenced off courtyard with a shack.

*Note you will need to either exit/enter the Ryoka's house to trigger the scene where the girls are attacking Masaru.

Nobuo: To start his route you'll need to go to the liquor store (house left of the town center) with Ryoka and talk to the two men arguing on Wednesday. Next you need to visit Nobuo at his mansion (upper left corner of the map). Finally, talk to Nobuo who should be next to the stairs by the entrance on the far left side of the map, on Wednesdays and Fridays. He will want you to make a bet, take him up on the offer and you'll play cards. If you lose, he'll take Ryoka into his tent and you're left outside, a kid blocking your way to them. The card game is a rock, paper, scissor game (3 cards, you pick. 10 beat 2; 2 beat ace; ace beat 10). Its completely random so best to just save and retry if you lose or win. After you lost 3 times will trigger his whole route.

Daisuke: To start his route you need to work part time in the video store, on Tuesday or Thursday. Do this 2 times.

After that you'll start seeing the heart symbol when him and Royka hang out on the other side of the river back in the village and later with Ryoka and Daisuke watching movies in Ryoka home. You may have to go into Ryoka's home to trigger an event where she tell you that Daisuke keep asking her out and what she should do.

Vagrant: To initiate his route you need to talk to him and enter the prep school to get a brochure.

After which you should go to Ryoka's home and Ryoka will find out about the prep school. Next you just need to go to Ryoka's school and study by yourself (there's a sparkling chair in the bottom left room).

This will trigger Ryoka going to the prep school where she will meet the vagrant. After which you can see his scenes by going to his tent in the park. Later on their will be a storm but you can get downtown by going south in the overworld map and walking downtown. Finally toward the end of his route he move into the shack in the bottom left of the town.

Yasui: To start his route you need to talk to him with Ryoka when he has a (!) on him. Next talk to the wimpy kid by the clothing store in the city.

Then head to the mixer bar in downtown

Afterward go to the house to trigger the event where the teachers question you for what happen at the mixer. But other than that you will find Yasui messing with Ryoka at the karaoke bar or hotel in downtown. There is also a scene at school. All you have to do is attend summer school while there is a heart above it to trigger it.