The Eliminator is a game mode introduced in Forza Horizon 4. It is a Battle Royale involving cars. Everyone starts with the same level 1 car.

Each car is assigned a level, with the levels ranging from level 1 to level 10. Level 10 cars are the best of the best and people with cars in this category are in a bigger advantage than other players. As you drive around, you can find purple/pink smoke which indicates a spot where you can change your car. Sometimes, this will be an upgrade, and sometimes it will not be. You can also obtain cars by challenging other players one on one. When/if you win, you can either keep their car or upgrade to the next immediate level of your car. This is the best way to get the elusive level 10 car.

Sometimes, the levels that the cars are assigned to can be misleading. I have seen people in level 10 cars get eliminated by cars in level 6 or level 5 cars. I actually beat a level 10 in a level 4. I also lost to a level 3 while being in a level 7 car. I also lost to a level 1 car being in a level 5. This guide is there to show you all the cars in the game mode. As well as some general advice from people on the internet that have beaten this game mode at least once (including me) 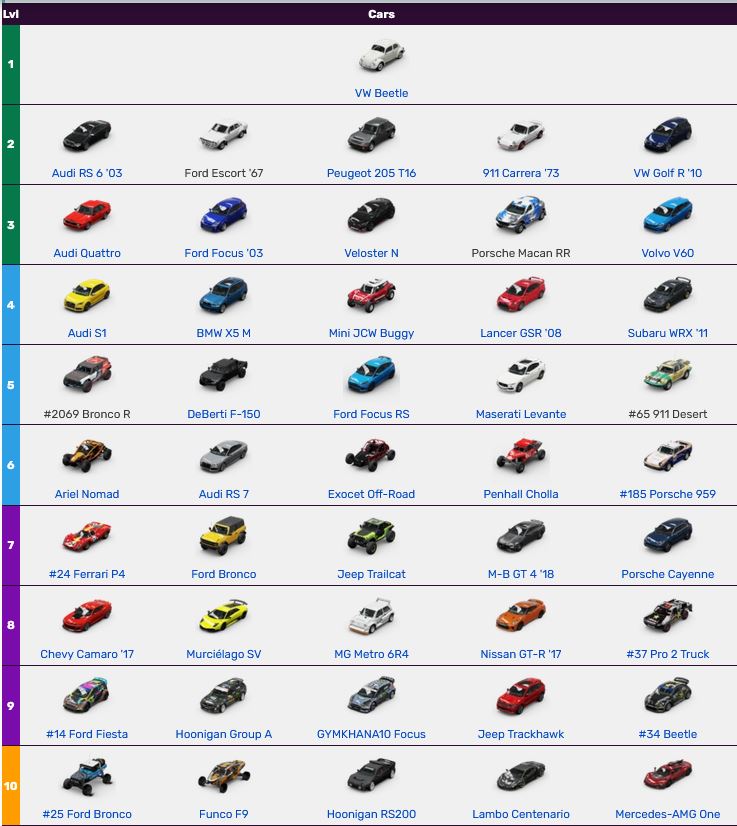 These are the cars in the Eliminator game mode (credit to the Forza Wiki for the picture):

The Eliminator is all about you knowing the map and trying to out smart your opponent. There is a lot of luck involved, but you can easily offset that with some quick wits.

The spawn - This is the first crucial step of the Eliminator. Your spawn can be your saving grace or could easily mess you up. Everyone starts off in the Volkswagen Beetle (shout out to PAPA FERNANDO). You want to get out of this car as quickly as possible. Unlike the Mini in Forza Horizon 4's Eliminator, there is no advantage to being in the Beetle. Most people spawn near the Horizon Main Festival in my playtime. There are spawn points for the car drops near the agave farm fields and the clover intersection near the Horizon Street Scene Festival Site. I haven't encountered many people in the jungles or the canyons.

The cars themselves - You need a car that is able to do three things:

3. Can drive well off road as well as on the roads

Most of the cars in the Eliminator can do one or two of those things very well but are put at a massive disadvantage. Try and figure out which car you like and play around with them. Most of the cars in the Eliminator are stock and can be easily purchased in the Autoshow, so you can just drive them around in a stress-free map and just test them out.

The map - This map is very deceptive. There are many points which feel flat and then suddenly while you are speeding through that flat zone, your car may flip. That means you hit a bump. The game is not very kind to you if you hit a bump at full speed. There are many points where you may be on top of a cliff and you don't even realize it (like in the desert) or you may need to traverse a set of hills.

TREES ARE YOUR ENEMY. AVOID THEM AT ALL COSTS. ALSO WATCH OUT FOR RANDOM BUILDINGS IN THE MIDDLE OF NOWHERE. These are HUGE momentum killers. I've also encountered a bug (maybe?) where my car would stall out after hitting a tree (I only have it set to Cosmetic damage) and my huge lead dwindled.

Challenging players - This is where you eliminate or get eliminated (queue the credits). You'll want to be pointing your car towards the center of the map in relation to where the circle is. This is where many get caught off guard. If you know you are travelling to the center and see a car going the opposite direction, you'll be at an advantage. This is how I beat a level 10 in my level 4. I've used the Blimp that's floating around as a good indicator in which direction to follow. It may not always be the case, but I found that helps. Pulling up the map every so often is also a good idea but be sure to do it when you know you're safe.

The Final Showdown - Congrats! You made it to the Final Showdown. Head - to - heads are disabled at this point and now is an all out battle to race to the destination. The best advice I've seen is that point your car in the opposite direction of the final circle. For example, if the final circle is in the bottom right corner of the map, point and move you car towards the top left corner of the map. For the most part, follow the final destination marker. Sometimes the final destination marker will be in Guanajuato. This is when ANNA comes in handy.

The Hoonigan RS200 is my favorite car in the entire game mode. Whenever I start an Eliminator game, I make it my goal to try and get that car as fast as possible.

My least favorite car per level - These are the cars I try to get out of as quickly as possible:

That Ferrari is my least favorite car for the group it's in. It's slower than the level 6 Audi RS 7. It is an awful off-roader. This is a car I try to get out of the fastest.

Here is a spreadsheet that basically gives a solid opinion on the cars in each level. There are also other details such as spawn locations. I found this spreadsheet on trueachievements.com. Credit to the creator (YouTube channel name: tehBar0n) of the fantastic spreadsheet. Also linked is the thread that I used to help me win my first Eliminator game. 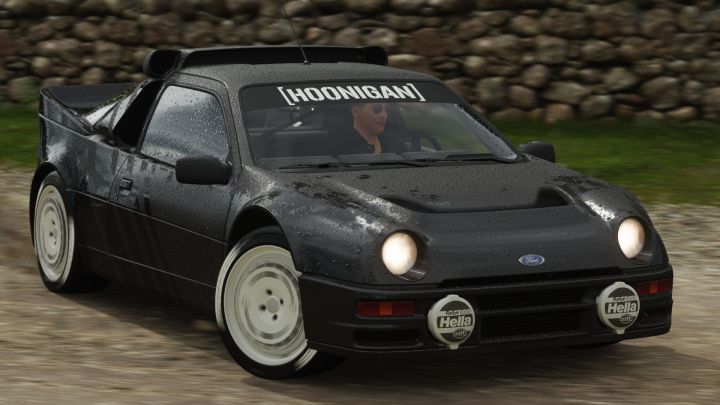 There is no information here. There is no meme. This is just a picture of the Hoonigan RS200