Home Encased How to get a servoshell (aka exoskeleton or power armor) after the Prologue.

How to get a servoshell (aka exoskeleton or power armor) after the Prologue.

So without further ado let's begin:

1. Go to Magellan base on Level -2 (Warehouse and parking lot) near the big Garage doors.

2. By using the gates you will get an interaction scene where you will need to let two marines in one of them is injured.

3. I'm not sure if the injured marine has to be saved in order to get the armor, but I did save him so that is what I advise to do. So first open the door asap by any method available to you and then get him some first aid without getting the servoshell damaged too much.

4. Once the marines are inside and wounded one is attended to go to the Level -3 (Military post) and speak there with John Keppler (the guy who stands near two servoshells)

5. He will give you a quest to go the Nashville truck parking and install there some scanner device he will also give to you.

7. The easiest way to complete the quest is to go into stealth the moment you get out of the sewers as there are several afflicted on this parking lot.

8. After installing the scanner device go back to Keppler on Level -3 (Military post) in Magellan base and he will give you his friend's servoshell.

This servoshell is damaged and therefore has lowered stats. To get it into a better state you will need:

- Basic servoshell manual. You can get it on the same level in a closed storeroom near the Orange wing elevator)

- MOBIOS armor plate. Can be looted from any MOBIOS under the dome. The easiest two I can think of are the destroyed MOBIOS in the swamp near Picnic Neutral Zone (save before attempting dismantling so you can reload if you don't get a MOBIOS armor plate) or a MOBIOS named "Old Al" which you will need to kill for Aaron in the same Picnic's swamp.

How To Get A Free MKIII Servoshell 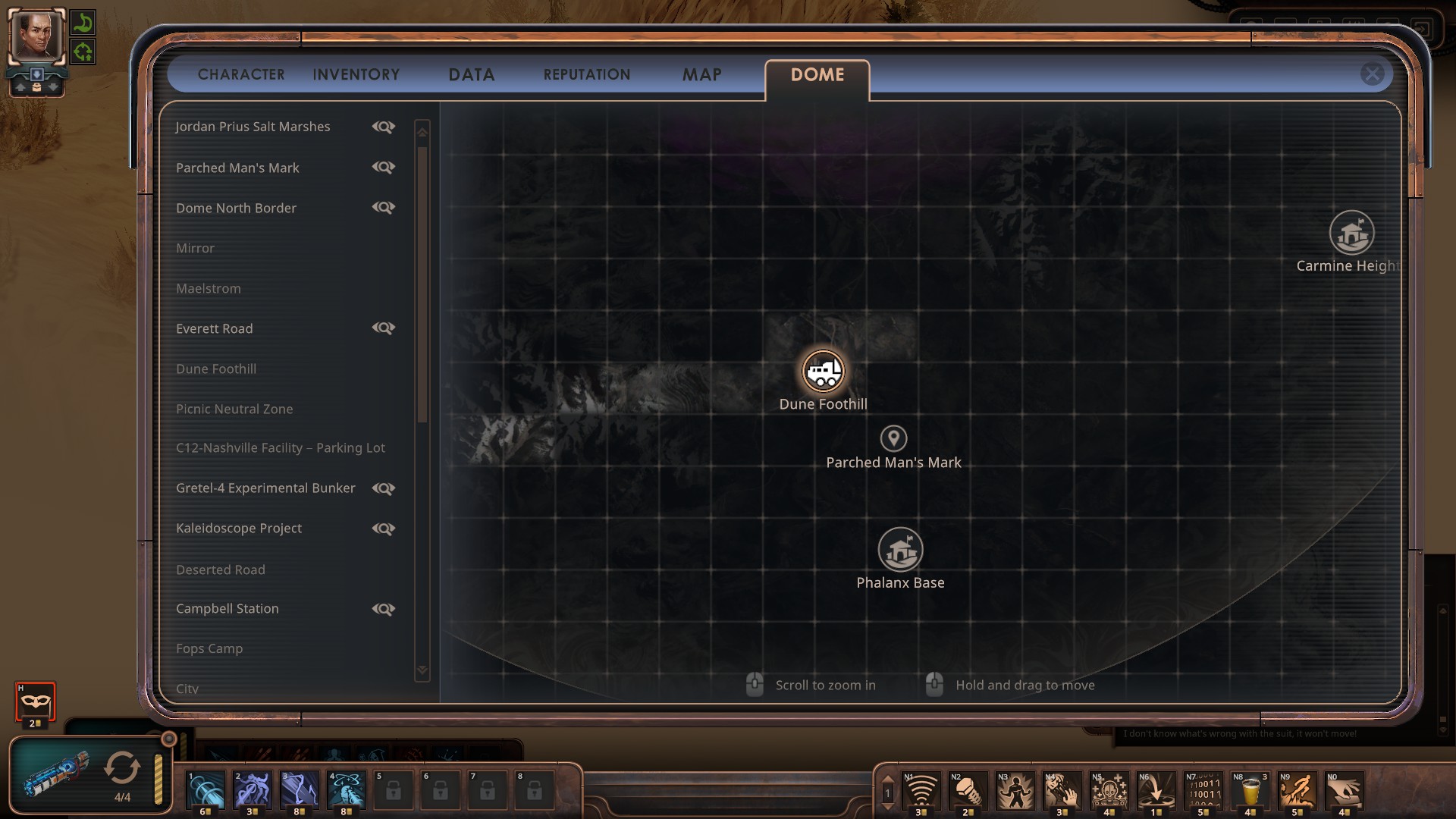 I found the guy stuck in the MKIII servoshell, so here is the update for the guide.

You will need to go to a location named "Dune Foothill" three squares north from Phalanx Base and one square west.

Please see the exact location on the picture below:

And there will be a soldier from the Black Wing stuck inside his exosuit.

There are three options to get the guy out of the armor:

- Use 3 Grease - this will both free the guy from the armor giving you +5 Rep for Black Wing and make it operational for you to have.

- Break the hydraulic locks on the armor (Requires Repair 50). This will result in you saving the man, he will go away and you will get a servoshell and +5 Rep for Black Wing.

- Disable the air filtration system (Requires Repair 30) This will make the man inside armor suffocate and he will fall out of it eventually.

After the armor is empty you will have these options:

All these last three options have the same results, the only difference is they either require a resource or a certain skill. Option 1 is quite useless as if you had 3x grease to begin with you should have used it on the previous step.

So from my point of view, the best course of action is to get a damaged servoshell at the beginning of the game, upgrade it to MKI as it's cheap and can be done in the same location.

After that don't bother with an upgrade to MKII or MK III, finish the "Emulator Project" main quest in order to decrease the Maelstrom in size, then go and get this MKIII suit as described above.

Resources needed for the upgrade from MKI to MKIII are not super easy to come by and you can get MKIII just by using 3x grease or nothing at all if you have Repair 75 or at least Repair 30 and Science 50.

By the way - this guy stuck in a servoshell turned out to be an homage not only to Tin Woodman or the guy from Fallout 2 random encounter but also to Alphonse Elric from Fullmetal Alchemist (note the guy's name).