It's a... sort of... colony sandbox simulator? You're going to build some kind of home for some dwarves. They will need food and drink, but that's about it. Dwarves might get upset sleeping on the ground, but the only things you need to keep your dwarves alive are food and drink. 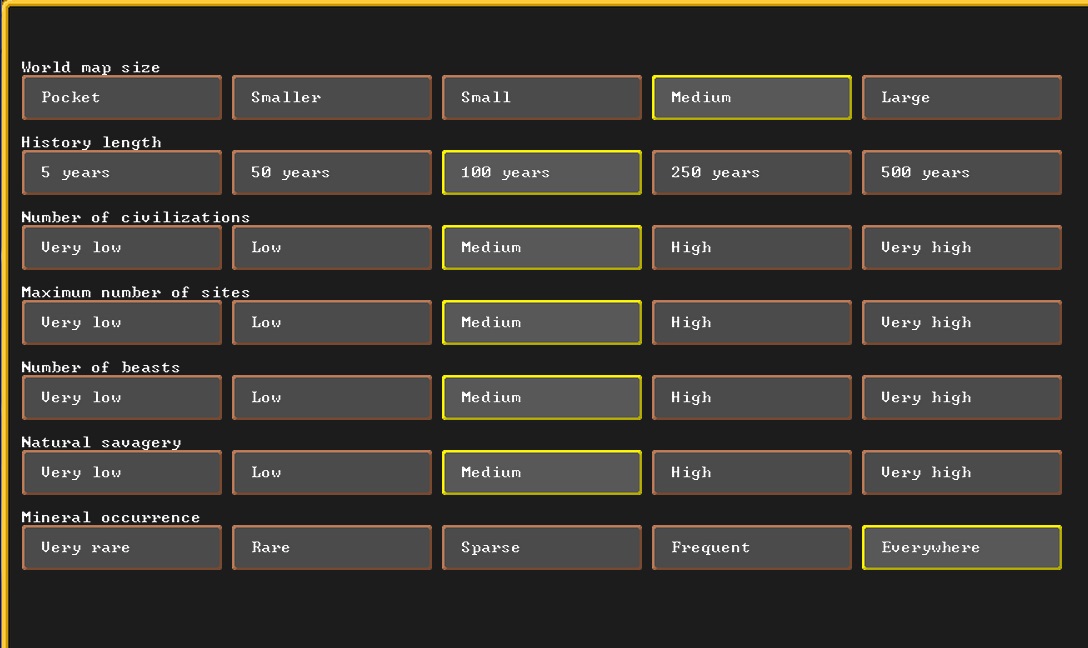 Importance of variations in World Generation (most important ones underlined, as far as dwarf survival is concerned )

Not a huge deal. Larger worlds will have more varied sites for making forts. Smaller worlds might get cramped and living far from other races can be beneficial.

Not a huge deal. How long creatures and civilizations have been keeping on keeping on.

I'd keep at Medium or lower unless you want neighbors .

Not a huge deal. How many distinct, named locations appear on the map. Keep it lower for a more untamed wilderness and world.

I'd keep at Medium or lower as too many means more frequent visits by giant monsters focused on destroying your fort. This is a sort of direct difficulty setting.

Savagery determines just how wild the wild can get. Higher savagery makes things like necromancers, vampires, were-monsters, and giant creatures prevalent. The lowest savagery makes your world a perfect Eden where only normal-sized rabbits and wolves live.

This determines how many minerals there are, density, and complexity. Setting Everywhere will ensure there aren't barren wasteland areas. You need metal to make stuff.

When in doubt, just use the default options for the original intended player experience.

Personally I use Large worlds, 250 years of History, Medium civilizations/sites/beasts/savagery with minerals Frequent. 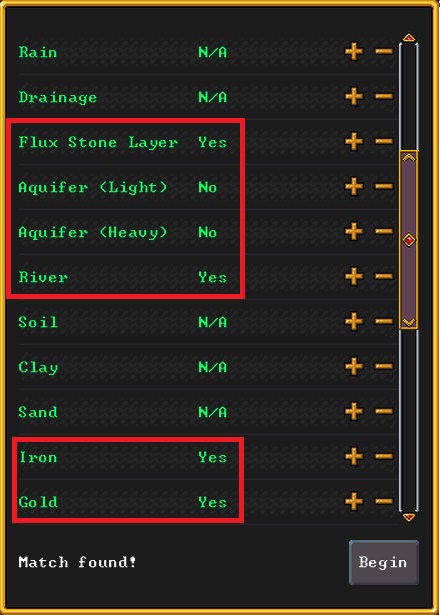 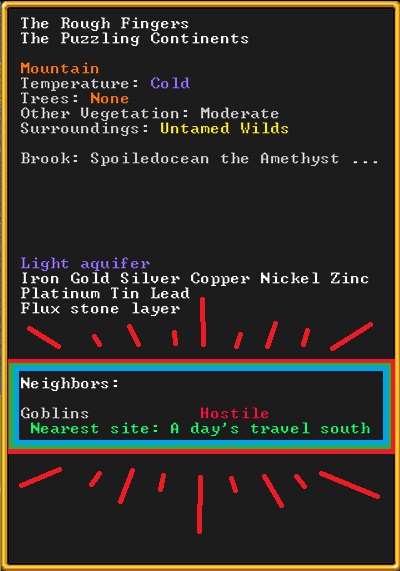 Using the "find embark location" button you can search for specific features in the world like rivers, metal, etc.

The only completely necessary ones include a source of freshwater like rivers, flux stone to create steel later on, a metal to make weapons/armor out of like iron, and a metal to make expensive things out of like gold/platinum/silver/aluminum. Aquifers make digging kind of difficult for new players so I would set that to "No". Setting it to "N/A" means that you don't have a preference either way, so "No" will ensure they aren't in the desired location.

Navigating this map thingy to find your desired location:After you press "Begin" and it stops searching the world, use the

Try to avoid hostile neighbors!!!Friendly neighbors are great but hostile neighbors will actively raid you. Elves are friendly but literally consider cutting trees to be murder, so they may impose restrictions on you if you don't want to war them like capped tree fells.

Prepare For The Journey Carefully (or Not!)

You are allotted a preset number of points to spend on dwarf skills, animals, bags/clothes, literally everything besides the number of dwarves you start with. Don't even worry about preparing your first run unless you're following a strict guide. Just go with the "Play now! Start immediately with default skills, equipment, and animals" as skills are easy to acquire and it gives you all the basics.

Disable Cooking With Your Drinking Materials 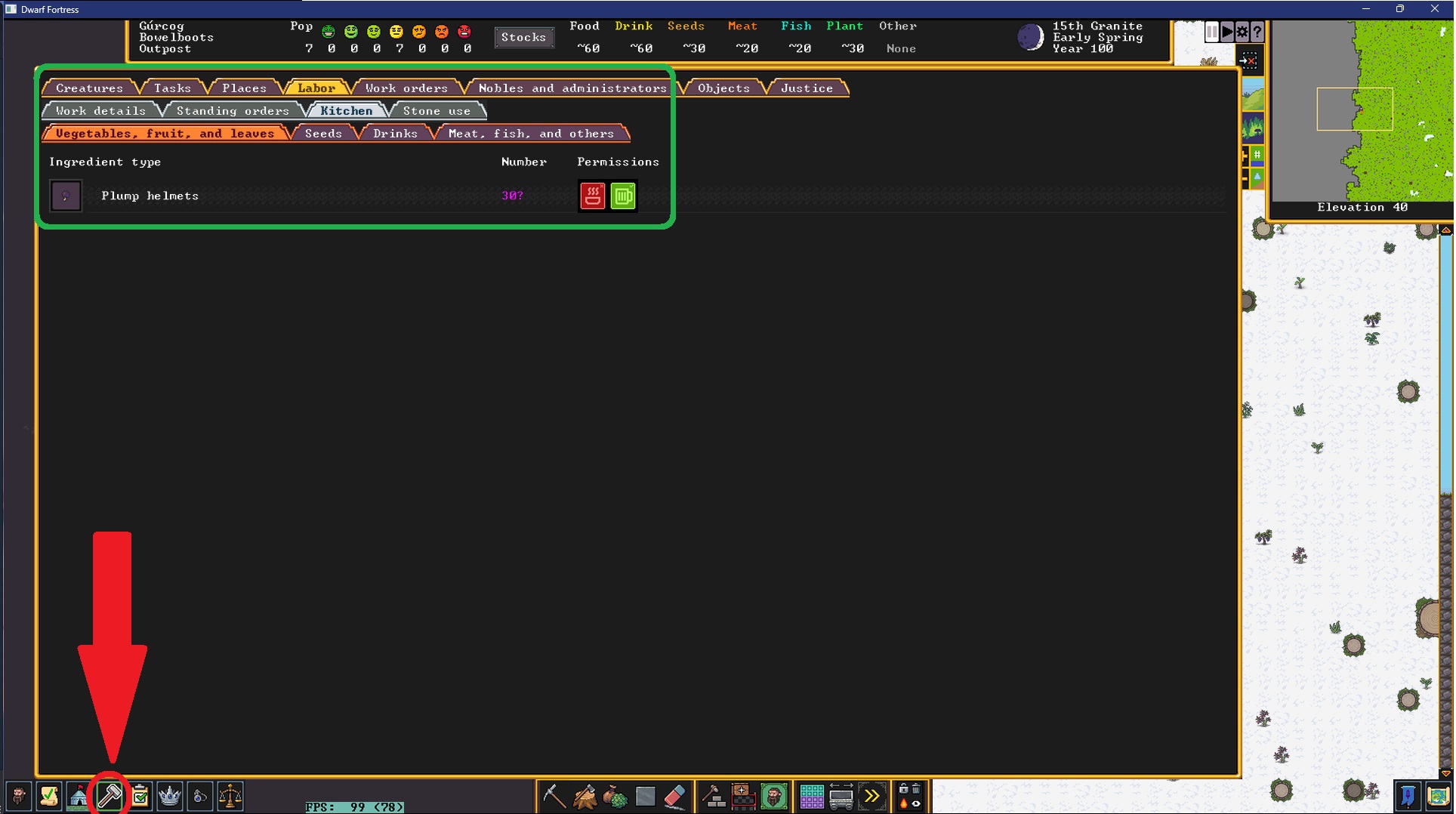 Click the hammer on the bottom-left bar to open up the Labors tab.

to turn it from green to red and disable cooking with plump helmets. You will use these mushrooms to brew alcohol. Cooking items raw won't return seeds to plant more with, yet brewing will produce new seeds. This makes it harder to run out of brewable mushrooms in the future. 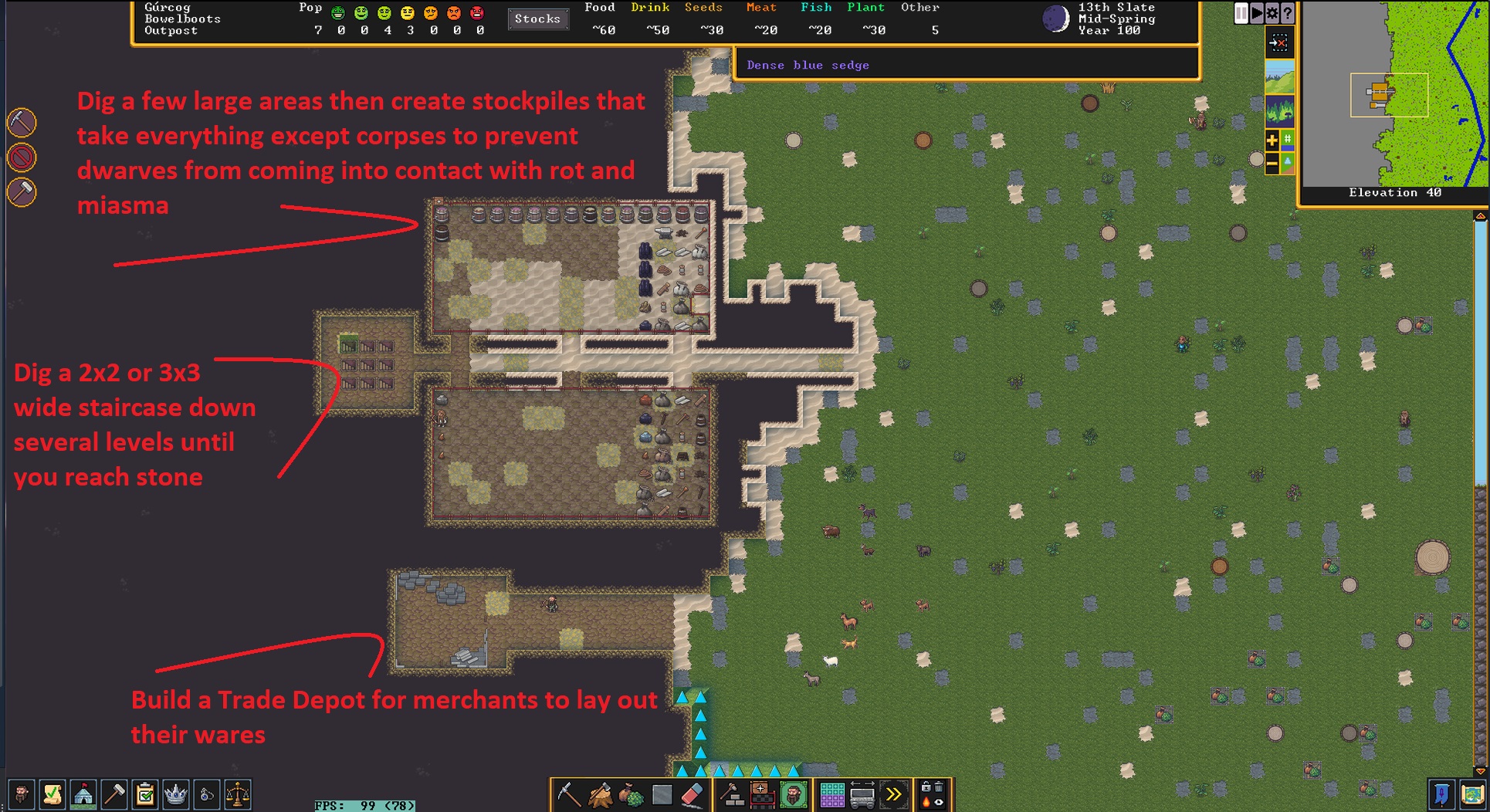 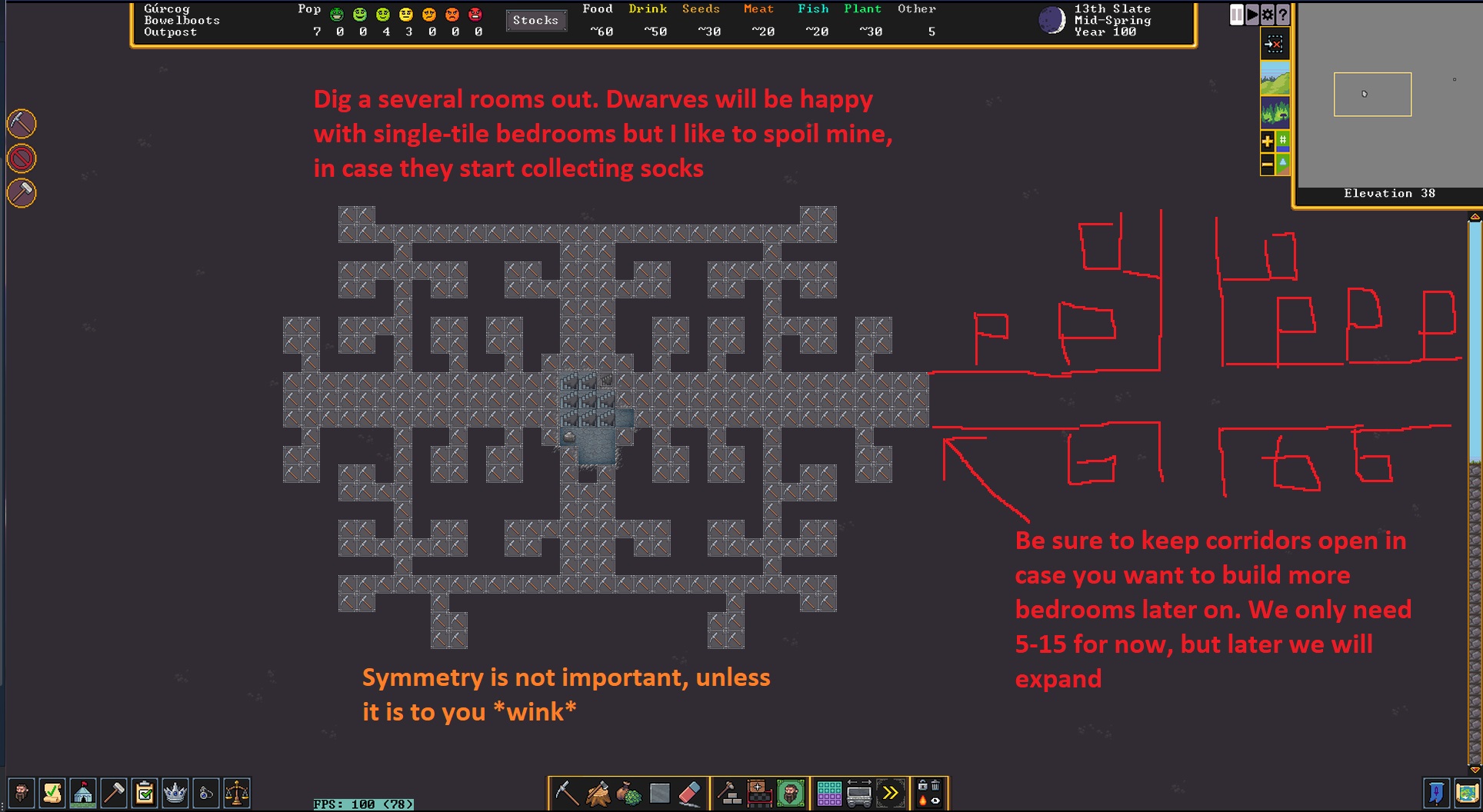 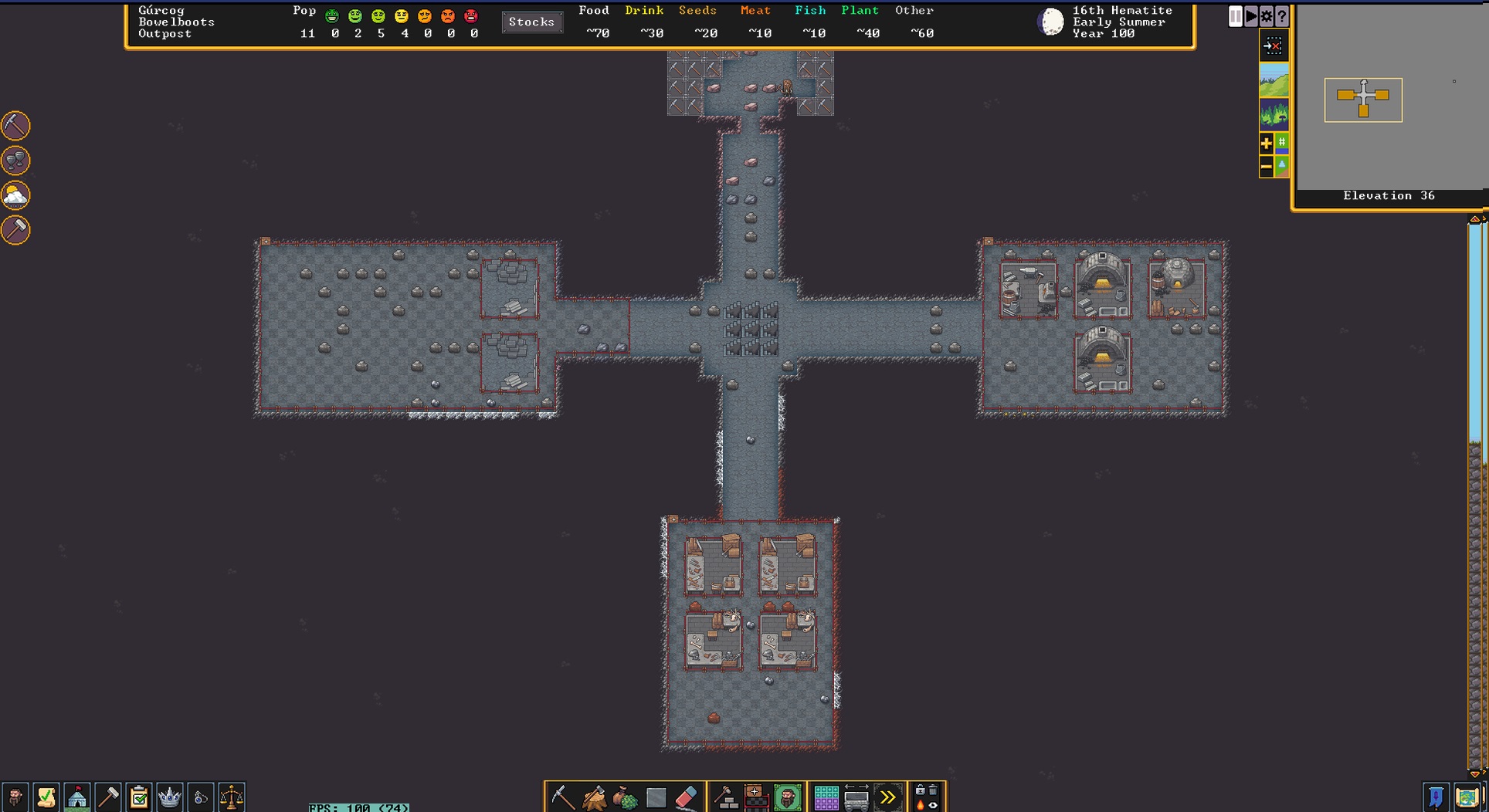 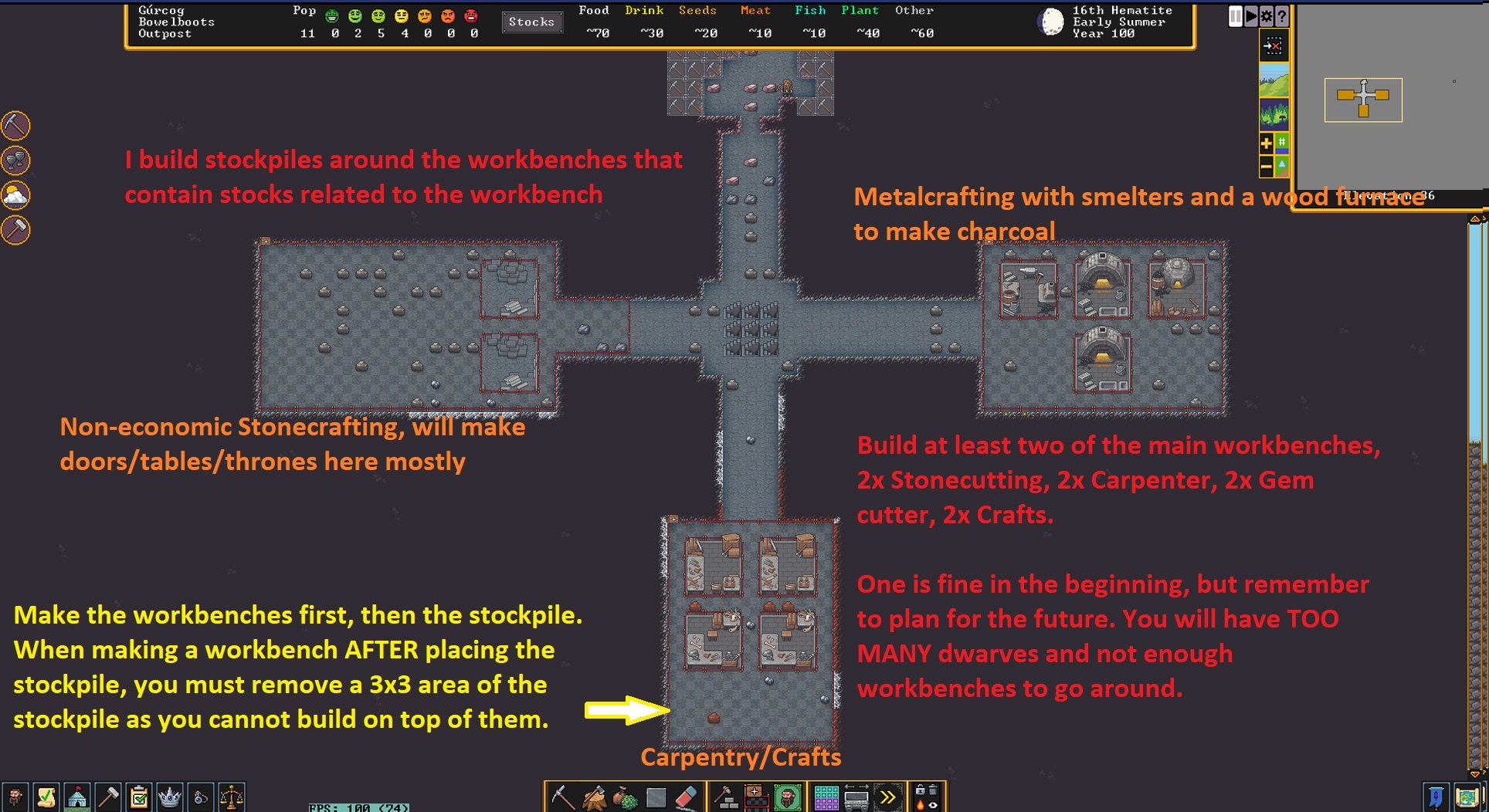 Hopefully there is a nearby slope to start digging into! If so go right ahead but assuming you're in a completely flat area, dig a staircase downwards into the ground.

Dig out some large areas which we'll use as stockpiles for the time being.

Create a Meeting Area in the center of your Fort or somewhere you'd like your dwarves to hang out.

Having hallways/corridors that are multiple tiles wide allows for more foot traffic and less cramped dwarves.

I like to start a new, single floor for most types of crafting. Later on you can build specialized areas for crafting but in first few years it's nice to enjoy the simplicity.

Start by carving out large wings from the stairway, each wing supporting crafts that require different resources, one for gems, one for economic stone and ore/metal crafting, one for wood and bone/pearl/horn/etc crafts, and build additional large rooms off these wings for more stockpile space.

You can set each stockpile to allow only its area's specially tailored materials, like setting the Stonecrafting area to only allow non-economic stone whereas the Metalcrafting area will have economic stone + metal ores. Take it a step further and designate only furniture/finished goods made from the respective area's material. 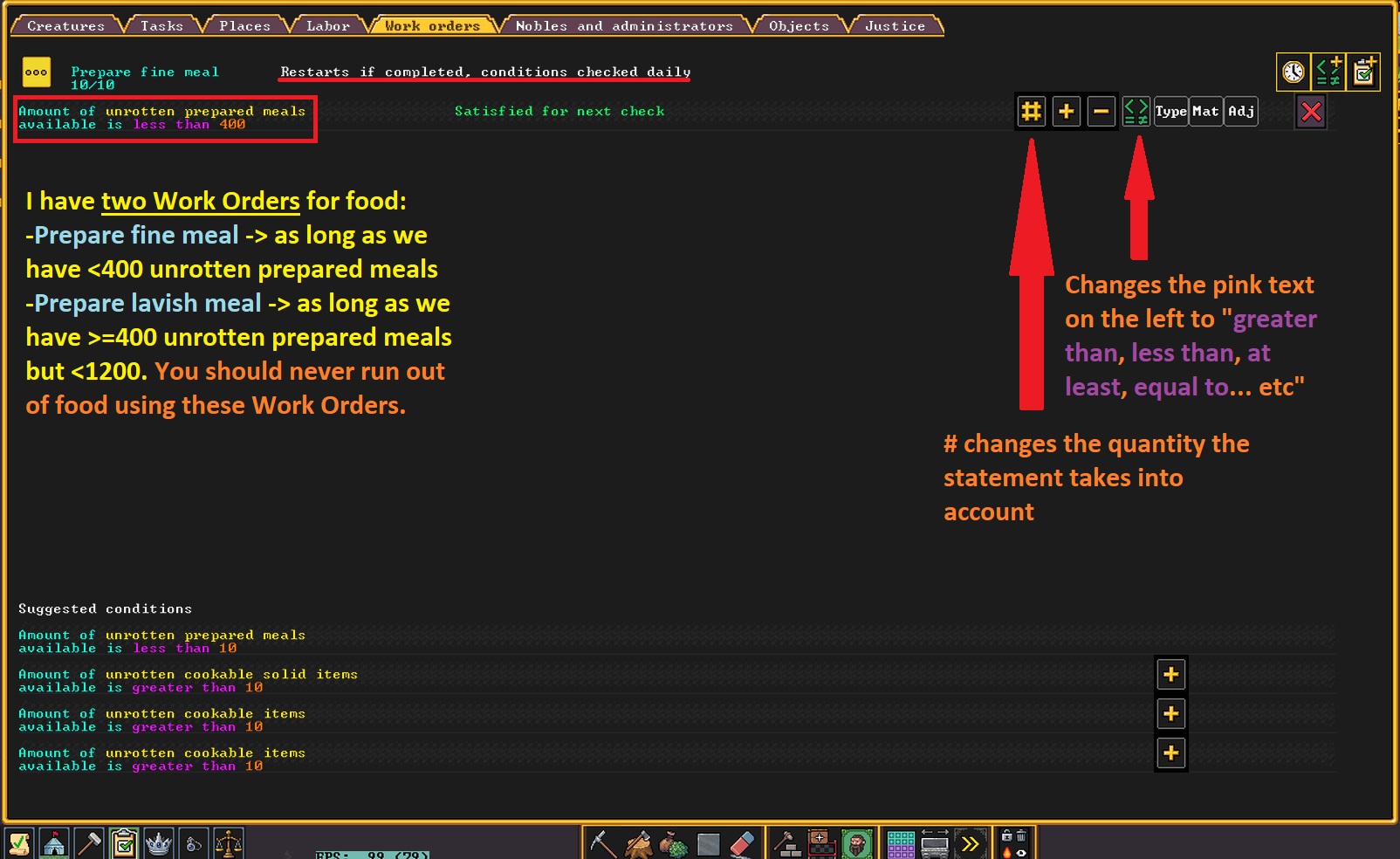 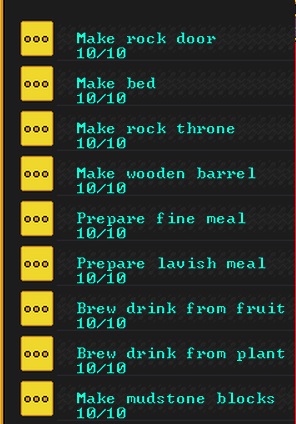 Finished goods including doors, jugs, beds, thrones, goblets, etc can be manually created one-by-one but Work Orders allow you to automate your dwarves. You will need to assign a dwarf to the Noble/Administrator role Manager for Work Orders to take effect.

Assign Work Orders for beds, chairs/thrones, doors, fine meals, drink from plant + fruit, and stone blocks. Assuming you have material, your dwarves will continue making these items forever until their stocks reach your desired levels.

I order a minimum of available 15 beds, 15 doors, 15 chairs/thrones, 15 empty barrels/bins to keep a steady supply. When you make 15 new bedrooms you will use up the supply and the dwarves will automatically replenish your stocks.

With a solid collection of work orders like the list below, your dwarves should create more as you use them. 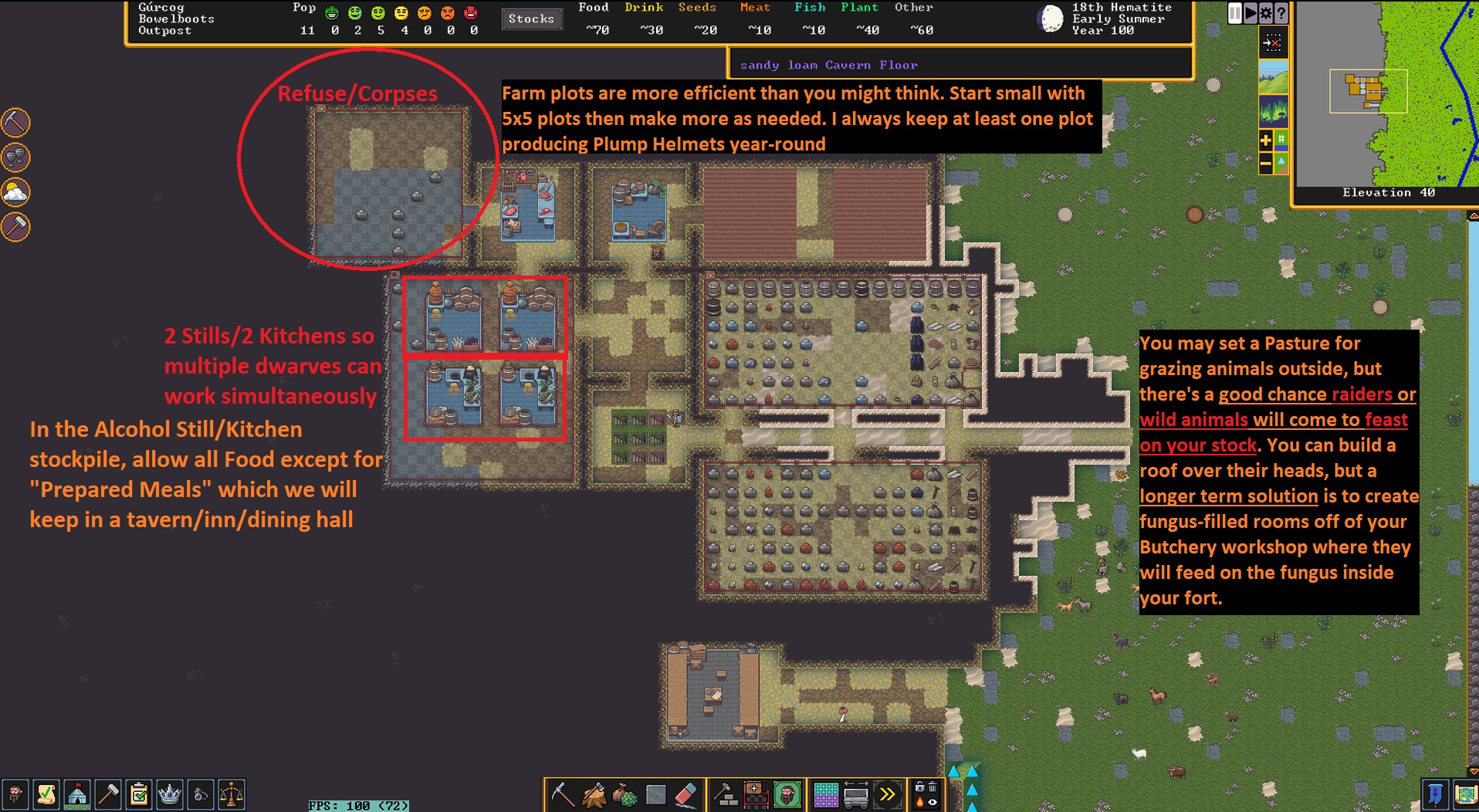 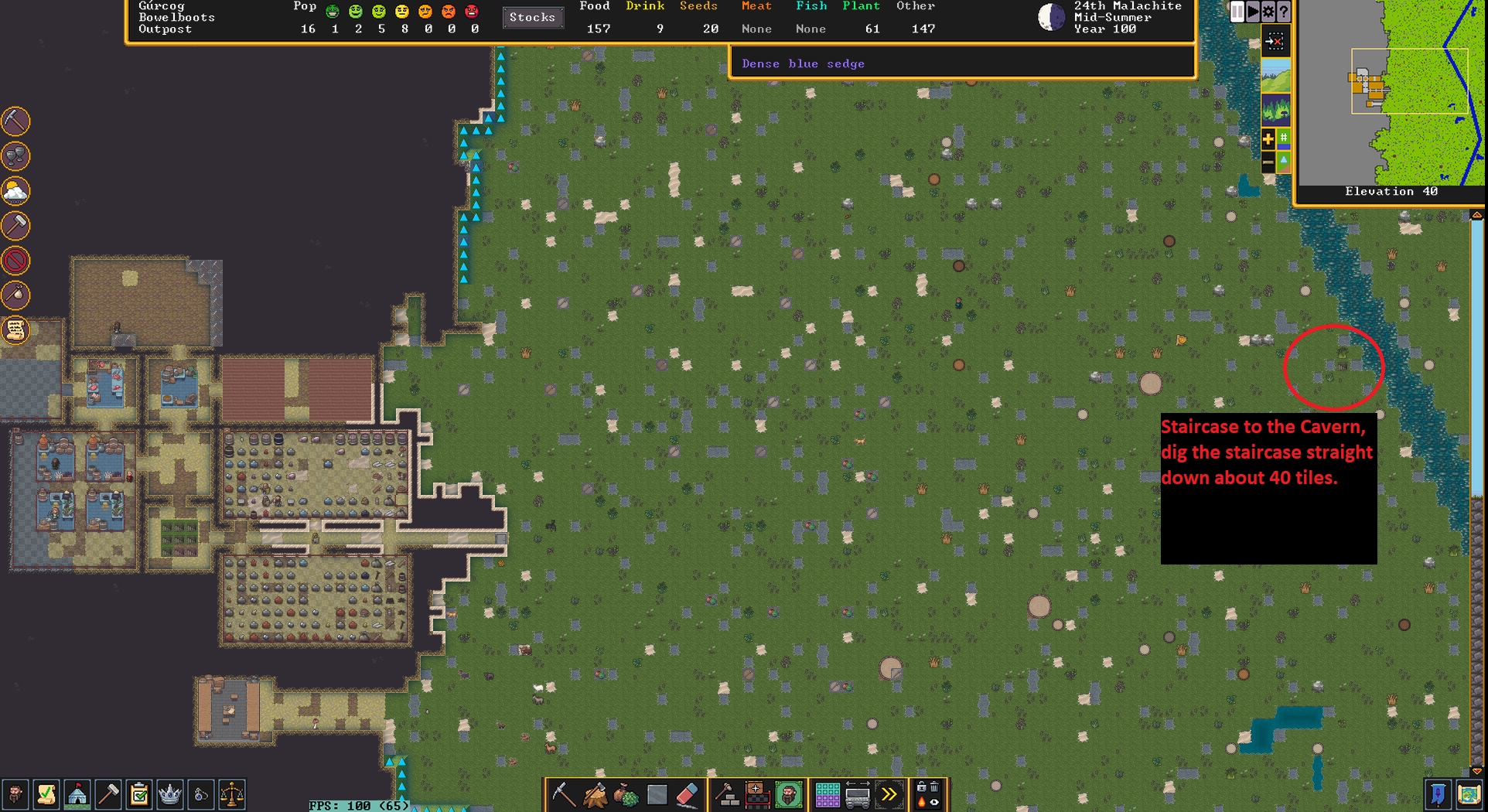 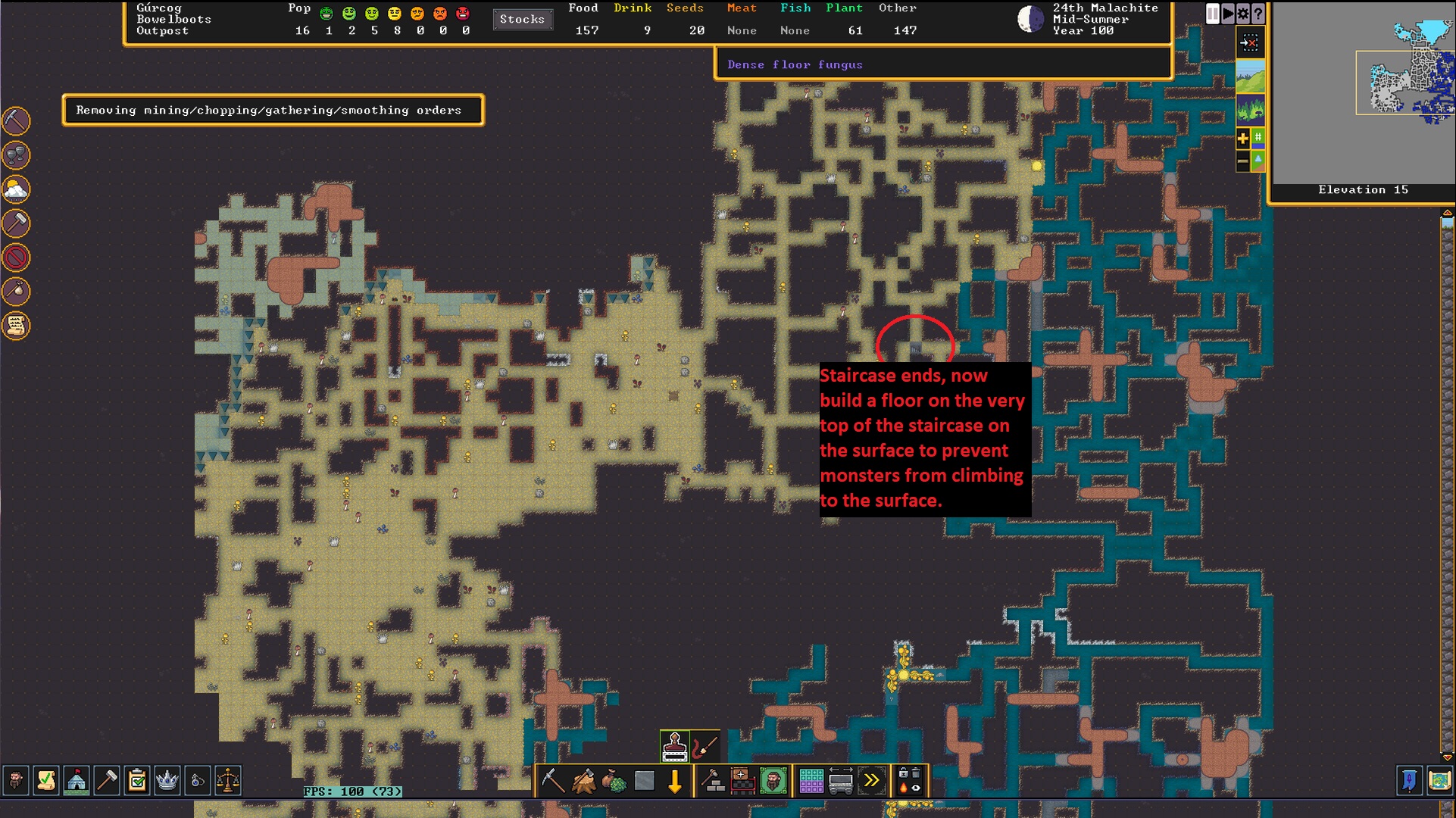 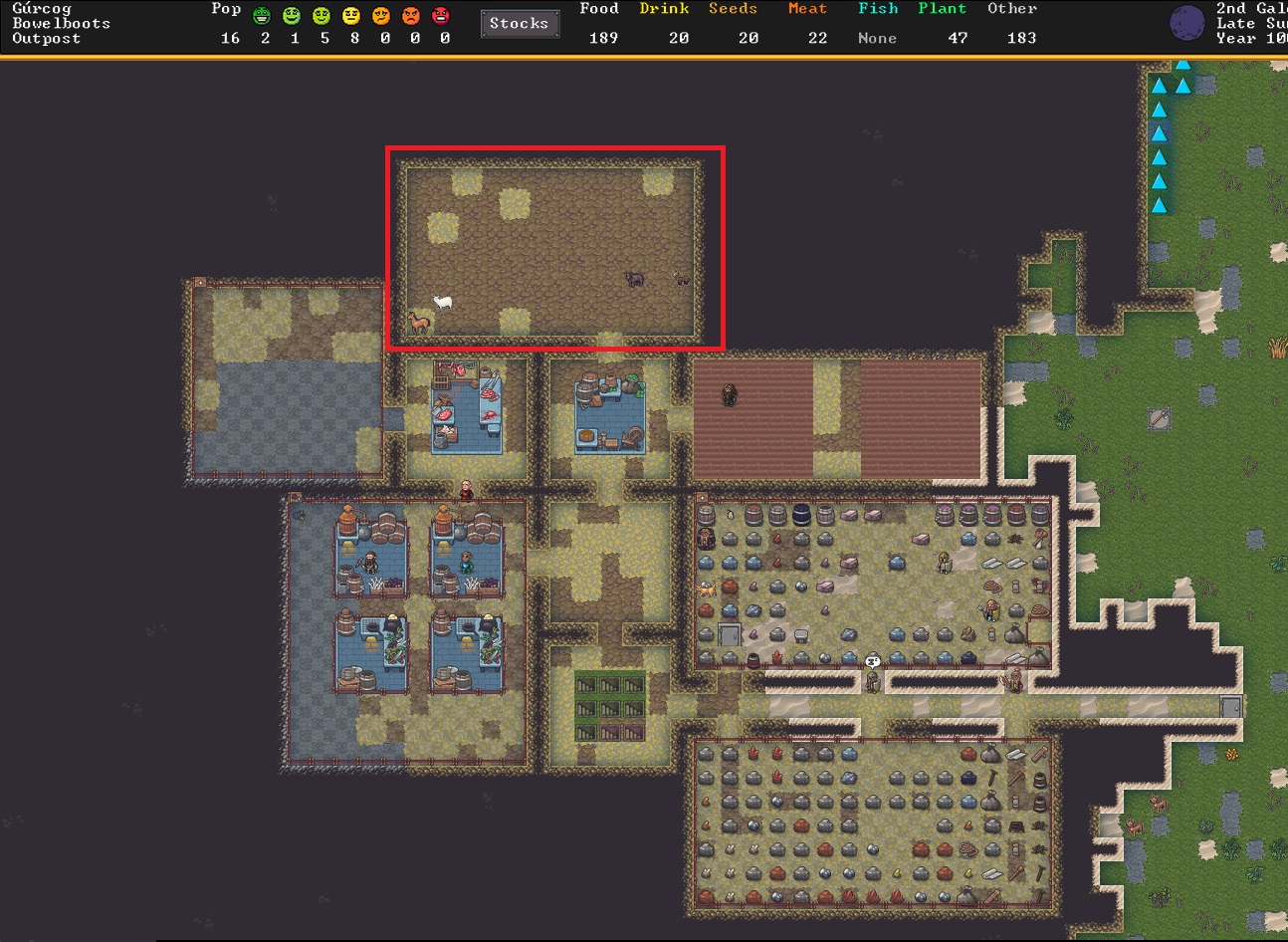 Farming is wicked easy. Build a few 5x5 farm plots, set one to always grow Plump Helmets year round with which to brew drink, and set the other to producing other crops. Above ground plots will allow you to grow fruit/oats/vegetables where underground plots offer... underground crops! Later on, we will create an underground river which will allow us to move mud onto stone and make vastly more efficient farms.

Animals will roam the entire fort including your crafting areas, bedrooms, eating areas, they really don't care where they are and grazing animals will accidentally starve themselves if they aren't wandering over grass.

Pastures allow us to assign a specific area we'd like our animals and livestock to stick to. Fences aren't necessary to create a pasture, but fences may keep out predators. Flying predators can swoop in and attack your livestock, so a longer-term solution is required to prevent unsolicited loss-of-life.

To easily keep animals fed underground where there is no grass to graze upon, we need to expose our fort to the fungal spores of the deep caverns underground. The spores will take hold all over your fort the second you unearth a cavern, despite the great distance between the caverns and your fort's loamy soil.

To begin, dig a 1x1 or 2x2 staircase far, far from your fort's entrance. Dig the staircase about 40 tiles straight down until you hit a cavern. As soon as you unearth the cavern, build a floor over the staircase to prevent underground monsters from spilling upwards onto the surface. Now, fungus will slowly spread all over all soil tiles within your fort.

Create a pasture in a very large room filled with soil and your livestock will now be safe from the wild and elements! Fungus will grow over time and eventually fill up the entire dirt area. 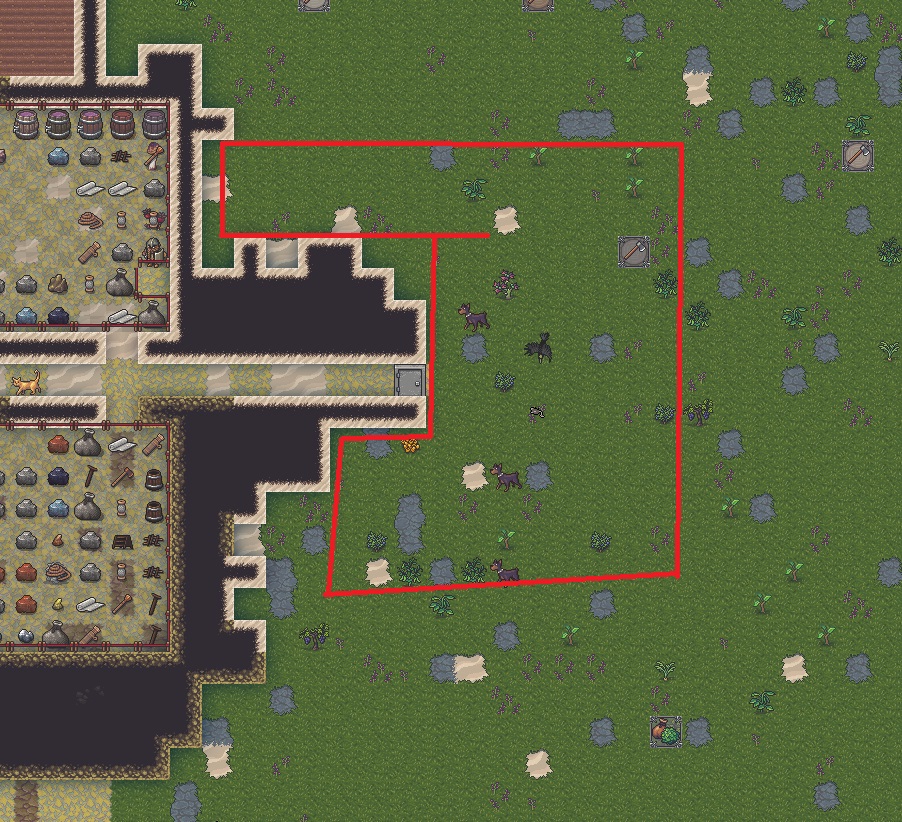 Animal Taming is kind of funny and I generally try to avoid the practice. Animals will breed automatically if a male + female cross paths on the same tile, so large pastures reduce the chances for a pregnancy and small pastures increase the chance.

To fully ignore this whole system, just trade with the elves who often sell caged animals. Every animal the elves have for sale are fully, permanently tame. You can get any kind of animal as well from these elves, including giant rhinoceros, coyotes, jackals, giant elephants, orangutans, tigers.

It's all personal preference but some animals are objectively more valuable than others.

Many animals may be trained for war and hunting. War animals deal more ☼lethal☼ attacks and hunting animals are X..x..stealthier..x..X..

I exclusively train war animals and pasture them outside the entrances of my forts. If kobold thieves try to sneak in to steal our valuables, they must first make it past the coyotes and war dogs.

If you find yourself lucky enough to get a hold of a war tiger or some other savagely ferocious trainable creature, consider assigning them to your Mayor or Duke as a personal bodyguard that also makes them very happy. 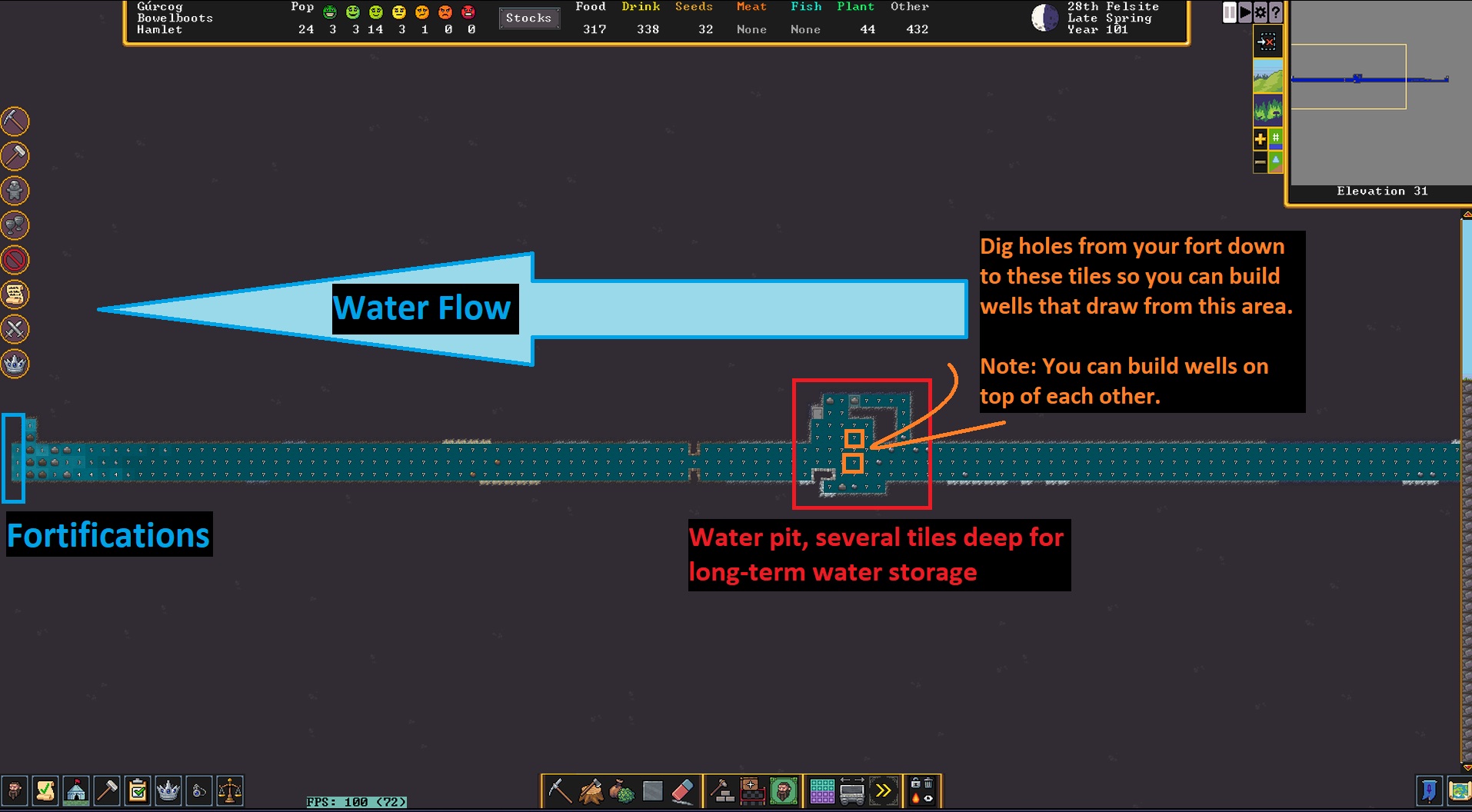 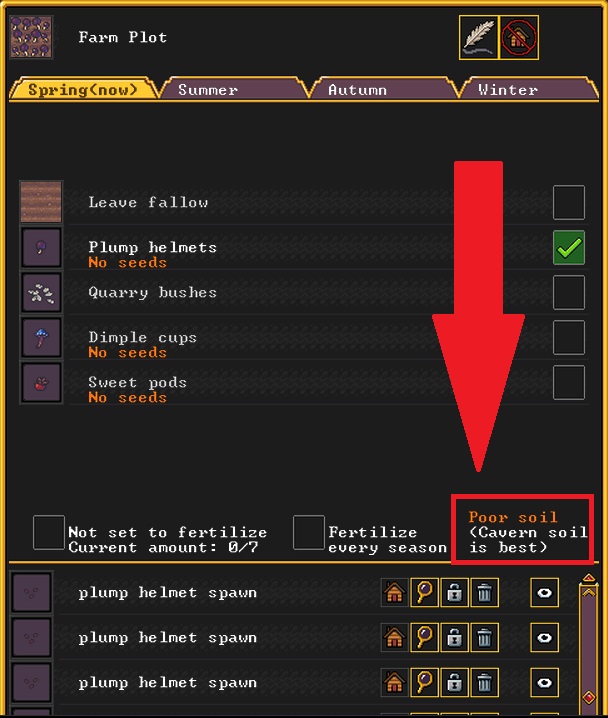 Dwarves are going to get sick of using the river for water very quickly. Immediately, actually. If you really want to avoid building a nice big underground water supply, consider building a well ASAP on the surface.

Start by digging a 3x3 stairway from the surface near a river, straight down until you are beneath your current plans for your fort. Dig all the way to the side of the map. You'll notice that you can't dig the wall out on the edge of the map.

You CAN smooth the stone on the edge and with smoothed stone, you can build fortifications into the stone. These "fortifications" aren't what you might think! They're slits in the wall that your archers can shoot out of but more importantly, these slits allow gas and water to travel through them. Your river can now safely flow out the side of the map as opposed to flooding your Fort and killing all your dwarves.

I like to channel deeper pits where your wells will be for extra water storage if you decide to close access to the river later on.

Once the plans are finished and your dwarves have dug the entire trench, made fortifications, and dug pits for your wells, dig a single tile out between your trench and the river to start the process.

Now your dwarves will have access to water from their most active locations including their bedrooms, major crafting area, and temple locations. Other important locations that may require a water source include hospitals and dining halls.

At some point it would be wise to dig large areas out for farming. By utilizing levers attached to floodgates, you can spread water over stone, then close the floodgate to prevent any more water from coming in. The water will dry up, leaving mud which you can use for farming.

Farm plots created this way are ~75% more efficient overall than soil near the surface. I can't find the statistic online that describes the official ruling but I did find vague proof in-game that states...

I will be creating a small guide on how to create an underground Farm using floodgates and large swathes of stone.