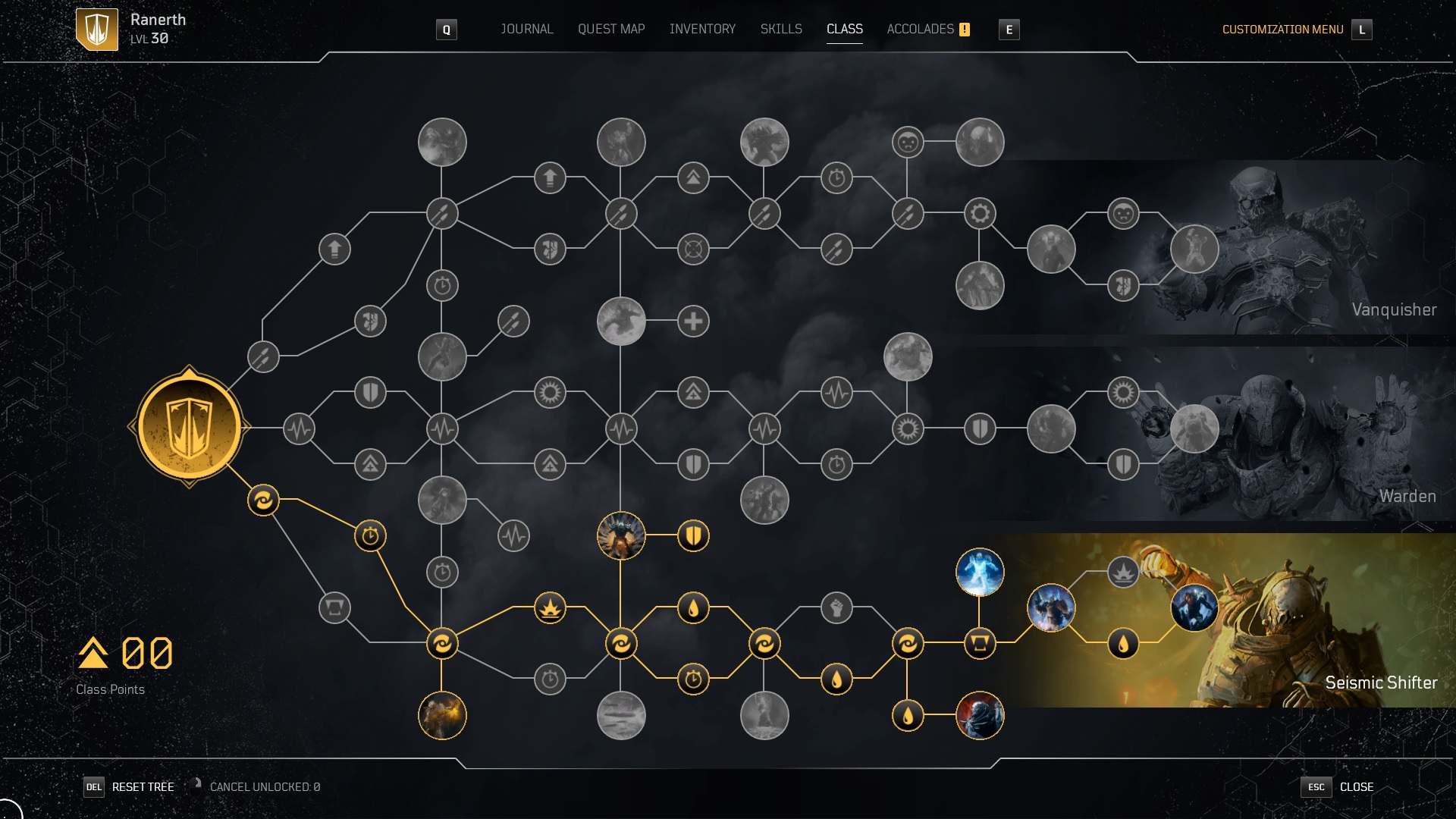 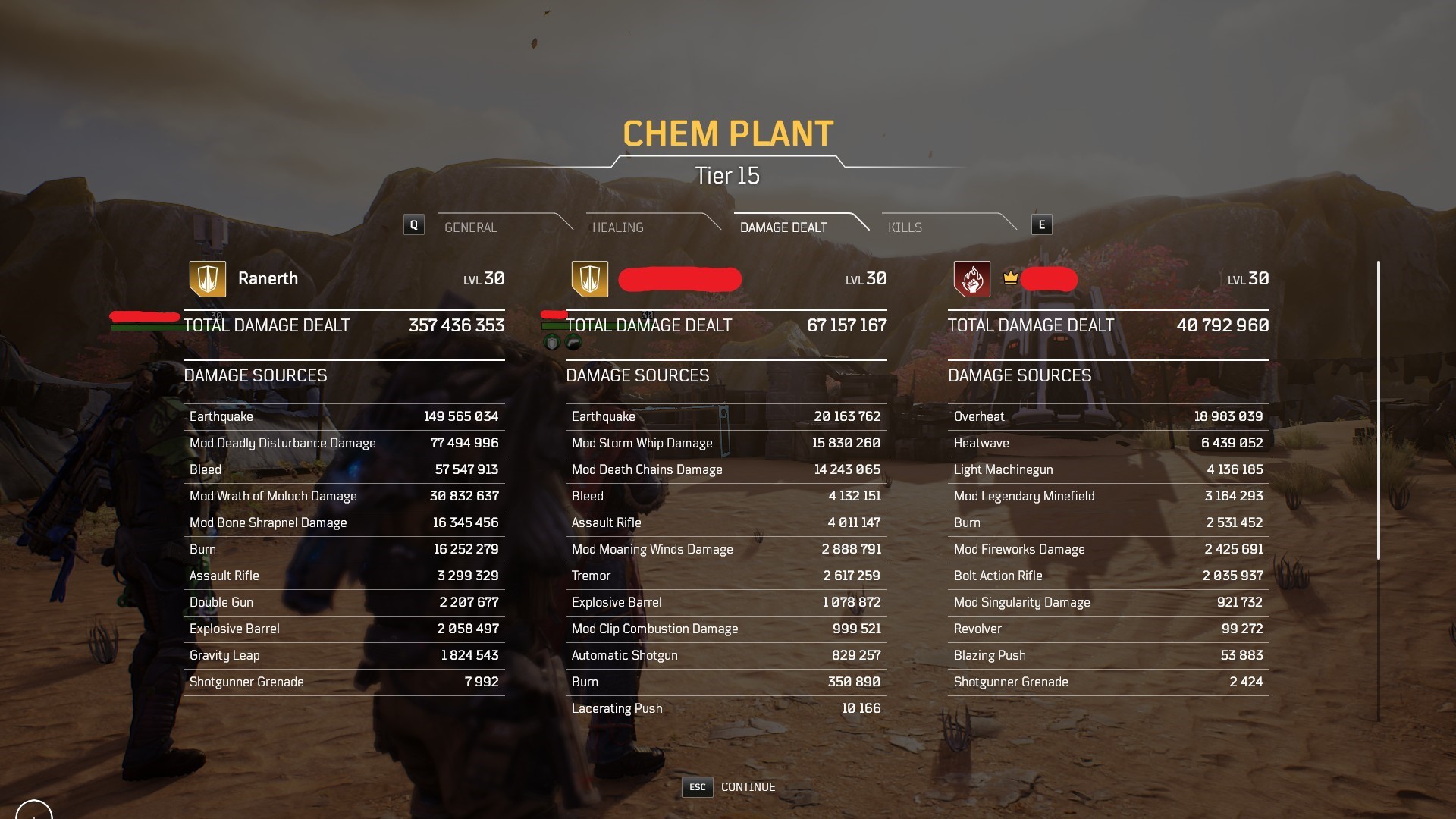 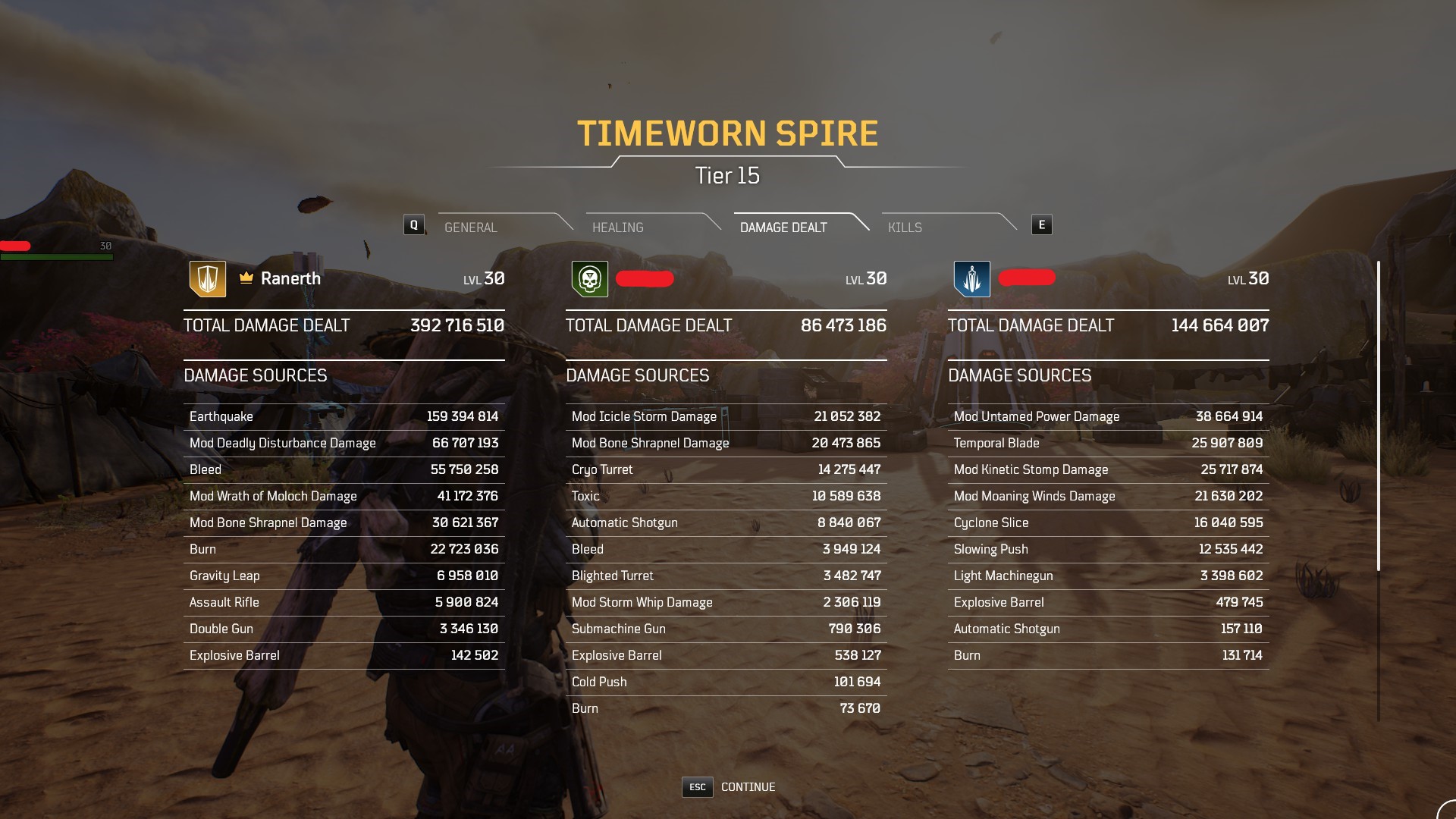 Gear https://streamable.com/qpgh6m (open in another browser)

Get as much Anomaly Power / Cooldown Reduction / Status Power gear as you can combined with the Seismic Commander Set. Best in slot set pieces are Helmet, Chest and Pants. Purple Gloves / Boots.

Use any legendary automatic/burst weapons that have damage mods with 3-4 seconds cooldown such as T3 Shadow Comet or T3 Wrath of Moloch on both weapons and swap between them to trigger the mods on cooldown. You can use a lot of mods for this so it's up to your preference. Pistol with vulnerability for the extra tanky targets. You'll have a lot of Status Power so the duration will be decent.

If you plan to use the T3 Fortress weapon mod you should always swap to that weapon first before using your Earthquake charges.

Stacking mods like like T3 Tainted Blood ( Increase the damage dealt to enemies afflicted with bleed by 25% ) will boost your damage from all sources including the big nukes from the weapon mods and your Earthquakes. Other examples would be Bullet Kindling, Captain Hunter and the Seismic Commander set bonus.

Anomaly Power increases the damage of your Earthquakes and makes you really tanky with the "Protected by the Anomaly" class node. It claims to also boost Status Effects but I haven't noticed a difference

Cooldown Reduction reduces the time it takes for your skills to be ready again. You'll be getting 30% from your tree for seismic and global cooldown reduction from your gear. 30% from the tree + 30% global will put your Earthquake down to 6,7 seconds.

Status Power will boost the damage of your damage over time debuffs (Bleed, Burn, Toxic) and increase the duration of Vulnerability and Weakness. Having a lot pushes bleed and burn to very competetive damage numbers.

Earthquake will be (should be) your number one damage dealer in most missions. With the proper mod setup it has incredible aoe and burst potential mowing down big stacked up groups of enemies with ease. Always try to maximize the amount of enemies you can hit with it.

Golem is mainly there to get some occasional damage boost for your Earthquakes thanks to the Paladin class tree node. It'll also save your life in bad situations. Having no duration mod for Golem means its cooldown will start sooner resulting in more Paladin uptime.

Gravity Leap is probably the most versatile skill devastator has. You can use it for some quick damage, get out of sticky situations and it also helps with getting to those pesky sniper nests. For some reason it's able to stagger enemies who are immune to stagger. 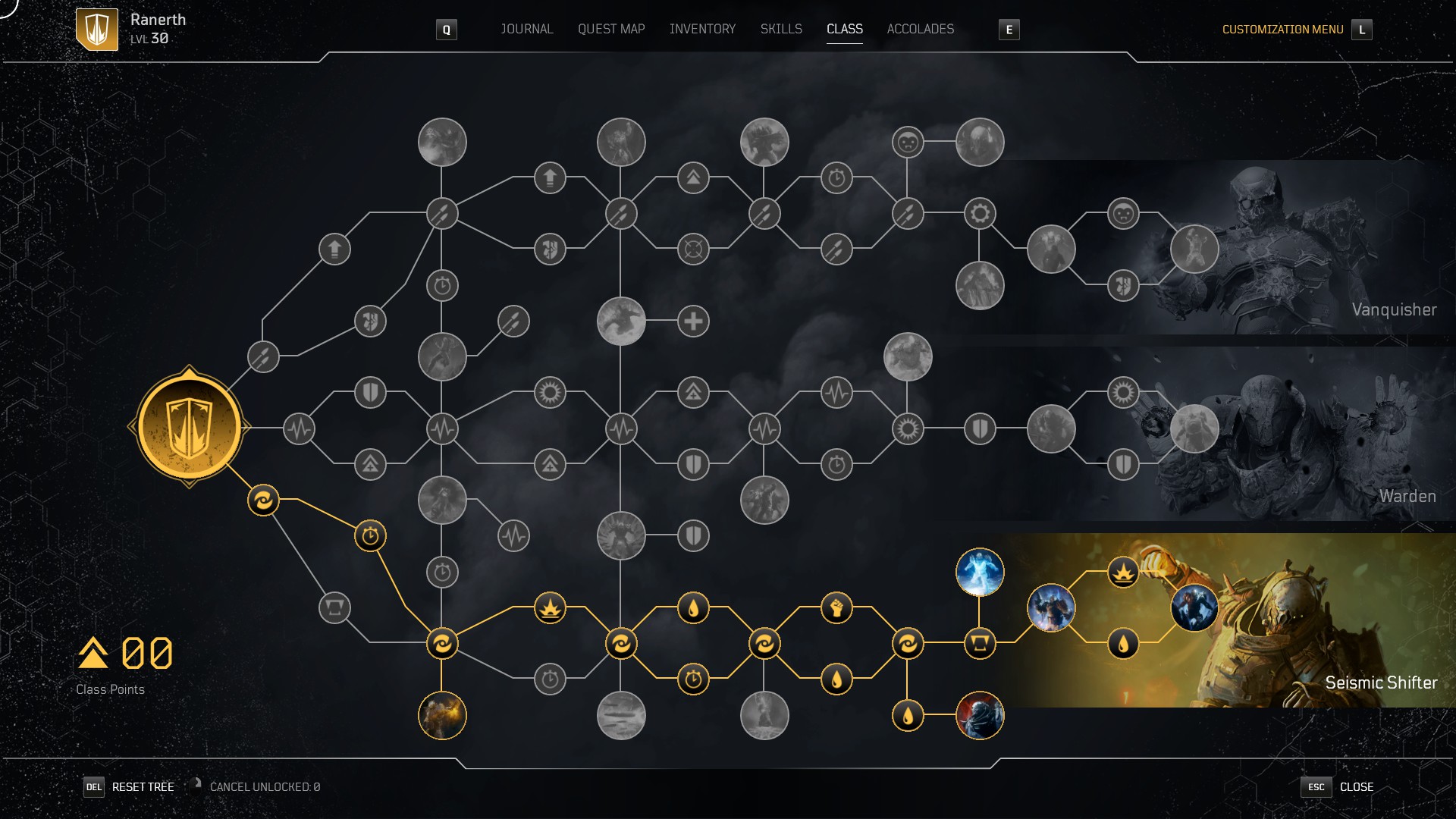 Stone circle + Through the Mob (Defensive)

I'd recommend the defensive version if you don't have a lot of gear yet and then switch to the offensive one once you feel comfortable staying alive. If you use the T3 Ultimate Bone Shrapnel weapon mod you could remove the bleed duration nodes and get Unending Watch (Golem Cooldown) and Perpetual Motion (Gravity Leap Cooldown)

You have a total of 10 armor mod slots available.

5 Earthquake mods you want to aim for

T1 Earth's Legacy to get a massive range boost of 60%

T1 Extra Quake for an extra charge before Earthquake goes on

T3 Second Quake for an extra charge before Earthquake goes on

T3 Captain Hunter boosts your damage against Elite enemies by 25%. It'll make it easier to deal with single target which usually takes Devastators the most time.

T3 Power Assimilation boosts your Anomaly Power by 11061 for each Elite enemy present on the battlefield.

T2 Untamed Power deals 30% of your Anomaly Power in a 5 meter AoE around you whenever you use a skill. This is especially good on expeditions with beasts.

T3 Despair instead of the flexible mod

"Enemies within the damage radius of Gravity Leap will receive 1.5x Anomaly damage for 5 seconds."

I am not sure this mod is working how it's supposed to since it also boosts the damage enemies receive from your weapon mods resulting in absolute crazy numbers. It also stacks if you use Gravity Leap twice with T3 Double Jump. This will also affect your groups damage done to the targets hit. Beware though as it seems to bug out at times.

This will add another charge to your Gravity Leap before it goes off cooldown. The idea is to use it twice in a row on a strong target to open a burst window in which you can kill it off really fast.

These changes will give you burst damage against really tanky at the cost of your overall damage. Non elites will still die like flies.

There is a lot of flexibility here. You can mix and match the mods to your preference/availability just make sure they have similar cooldowns so they trigger at the same time. Ideally you want to have two Tier 3 mods on your weapons so naturally you'll need a legendary that already comes with a good damage mod ( Inferno Seed is my personal favorite )

Here are some mod examples

T3 Shadow Comet does 210003 damage in a 3,5m radius around your target and all you have to do is hit with a single bullet. 3 second cooldown

T3 Wrath of Moloch is your best option to apply burn to everyone with a 100% uptime while also dealing 161541 damage in a 5m radius around your target. Keep in mind that it requires a critical hit (headshot/weakspot) to trigger. 3 seconds cooldown

T3 Deadly Disturbance is a aoe burst for 222927 damage in a 5m radius around your target after scoring a critical hit. 3 seconds cooldown

T3 Ultimate Bone Shrapnel does 203542 damage in a 5m radius around your target and applies bleed to everyone. It's great as secondary mod on Inferno Seed to apply both burn and bleed to increase your damage while Earthquake is on cooldown. 3 seconds cooldown

T3 Fortress boosts your overall (gun/mod/DoT/skill) damage by up to 43% based on your armor value while you have the weapon in your hands. At max level every class will have more than enough armor to reach the maximum of 43% without even going for a single armor node. I'd recommend to use it on one of your weapons since it's a massive boost to your Earthquake damage - simply switch to that weapon whenever it's off cooldown. It'll also boost the other damage mod you have on that weapon. (Example: Frontline video)

T3 Claymore Torrent does 98863 damage in a 6m radius around your target. Can only hit up to 4 targets. 4 seconds cooldown

T3 Sandstorm does 232619 damage over 5 seconds in an unknown radius around your target. 5 seconds cooldown

T3 Kinetic Stomp does 232619 damage in a 5meter radius around yourself if you fire a shot. 4 seconds cooldown 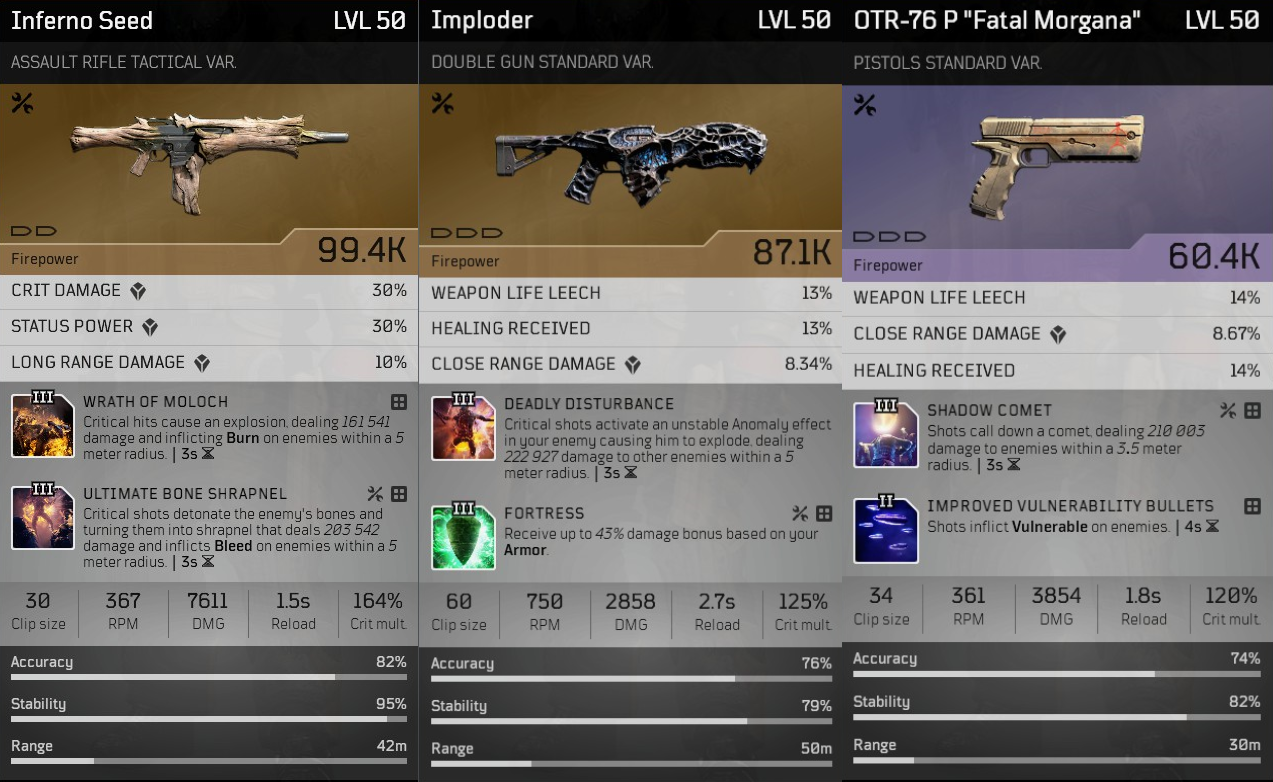 As mentioned in the weapon mod section this is pretty flexible.

Pistols are not really useful outside of applying vulnerability.

Check your legendary weapons for damage mods and then add another one.

Budget gear / How to get better gear 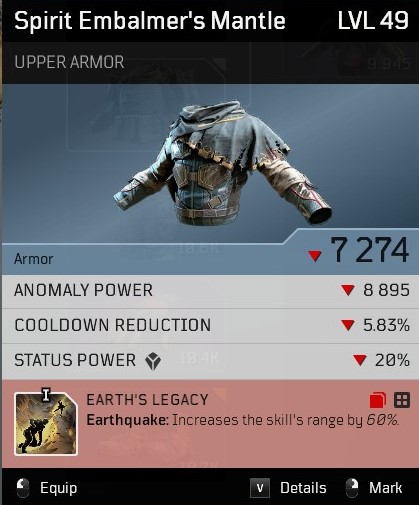 Obviously most people won't have all this gear available right away but luckily this build still works really good on a budget and can clear some CT15 maps solo with average gear. Make sure to always check Bailey and Tiago between missions for items with the right stats/mods.

I recommend the mission "Scorched Land" to boost your challenge tier since it has a very generous time to get a gold medal.

https://streamable.com/c7322a This is my old gear before I got all the big multiplier mods and the Seismic commander set.

https://www.youtube.com/watch?v=aDLnBlEPdXQ This is a not optimal run using that gear.

Make sure to check every item for good stats. It's not too hard to find a piece of armor with the perfect stats for this build since you can also make use of blue rarity drops.

This is an example of gear you should not throw away. Often enough it'll come with a Earthquake mod you want making it the perfect choice to upgrade. If the first mod is bad but the stats are good you can still try upgrading it in hope for a good T2 and then change the first mod.

From my experience T2 Death Chains is the best T2 weapon mod available for damage. If you find a automatic/burst gun with it consider using it by adding another damage mod.

Your biggest strength is AoE. You'll be swapping between your two primary weapons to activate their damage mods while applying bleed/burn so that everything takes a very large amount of extra damage. Depending on the mods you use you'll have to get a feeling for the mod cooldown. I'm using 3 second cooldown mods right now so they're very easy to time and don't feel like a hassle at all.

Inferno Seed with T3 Ultimate Bone Shrapnel is the smoothest experience you can have in my opinion since you apply both bleed and burn at the same time in a 5m radius with the same cooldown of 3 seconds.

Make sure to use all your Earthquake charges within a small time window so it can come off cooldown again.

If you are using the T3 Fortress mod always swap to that weapon before using your Earthquake charges.

Try to hit as many enemies as possible with your Earthquakes. Don't use Gravity Leap defensively only - use it to get into better Earthquake positions

Once you have most of the core gear/mods CT15 will be very comfortable to play in both Solo and Party. Party play allows your bleed and burn to really shine.

This buff will help players better deal with smaller mobs, but efficiently killing Elites will still require the use of other skills as well.

Note regarding impale: We are aware that some players would like enemies to be registered as “dead” faster after impalement. Changing this behaviour might have ramifications for the AOE Armour and Health Regen buffs this skill provides, but we’re currently considering what can be done here.

The build remains the same. Earthquake is still much better than Impale and Reflect Bullets is just too slow to be useful for higher tiers.