They have a range of 10 tiles in a cone shape that spreads out from the turret making it possible to bait shots while a target is a whole tile away from the projectile's path.

Galaxite turret projectiles fly through other galaxite turrets but damage stone turrets and vice versa. despite turret projectiles flying through the turret, turrets actually block other turret visions as a wall would. due to the targeting vision, the closest turrets can be to each other in a row/column to shoot through other turrets is every 5 tiles (4 tile gap between turrets, 5 tile gap for slimes).

Projectiles decay after 150 tiles, turrets don't shoot when the player is further than 150 tiles away even when there's a target in front of it while powered.

Some Notes And Bugs

Mobs have different hitboxes so it'd affect the turret stacking based off which you use, best 2 choices are slimes and core sentries. slimes are easy to spawn, easy to isolate on a single tile to bait shots, and they cause almost no issues. core sentries have a larger hitbox but they let you stack the turrets closer with a 4 tile gap between turrets while slimes need a 5 tile gap for turrets to always shoot cause of their hitbox (4 tiles would work for slimes but the turrets would have some down time due to the small slime hitbox). Core sentries cause some issues as of v 0.5.0.1, they can occasionally target but not attack through walls which can break turrets, they can somewhat randomly despawn themselves or spawn other core sentries and scholars in its tile but they don't seem to do that once in its isolated in its tile for long enough. It's better to have 2 turrets with a 1 tile gap from the sides to target a mob between them thats 9-9 tiles in front. id recommend using slimes since its a bit overkill to maximize on turrets using core sentries, even if more turrets may be needed for something like a late game desert mob farm or for a boss, you can always build and stack segments of these in a row/column on all 4 sides aiming at the center. As of 0.5.0.1 the game is still fairly buggy, turrets can shoot when the player is over 100 tiles away when the turrets aren't powered on (idk if there's a limit on tile range for this bug). I'm mentioning this cause isolated orange slimes still die occasionally when the player is away despite them being out of harms way when the turrets are off. I'd suggest using purple or blue slimes since they can tank more than two turret shots so they should survive the bug. Bottom left turret targeting top core sentry through a small gap ->

Building It With Slimes 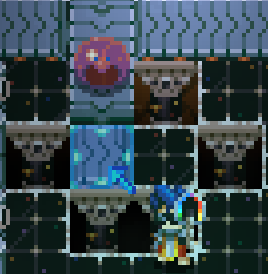 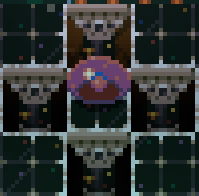 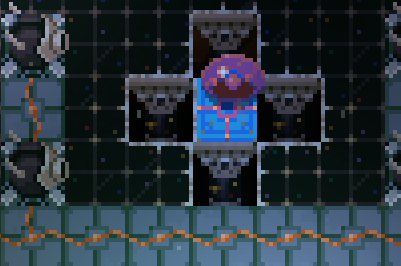 I'll be showing how to build 2 columns of turrets per segment, if you only want one turret per segment, you can remove the column/row of turrets that are away from the wires. Note turrets block mob vision so you can wall off the target(s) with a few turrets to prevent it from attacking the isolated slimes. you may have to wall them off on the sides to protect them so at least make the build 7 wide for the 2 turrets, walls, and wiring.

you can put the slimes in first like shown here ->

Slimes should have a 5 tile gap between other slimes, a 2 tile gap for slimes between turrets, and a 5 tile gap for turrets between turrets. (optional) the front segment shouldn't have turrets in the middle between the first two slimes since they won't have anything to shoot at (the tiles at and below number 6 in the image above). Besides the start and end segments, each other segment should look something like this for every 6 tiles besides the wiring when the power needs to be extended (6x4). (optional) the final segment would be the same as a middle segment but without the slime since the last turret wouldn't be targeting a slime 3 tiles in front but instead it'll shoot the slime that's 8 tiles ahead of itself

note: projectiles decay at 150 tiles so you should build no more than 24 segments for slimes. if more turrets are needed then repeat the build on other sides aiming at the same spot as the first build or build it using core sentries to get it compact by 1 more tile per segment to get 30 total segments for a single build. you can build them aiming at each other since the projectiles won't harm the isolated mobs in the build.

Building It With Core Sentries 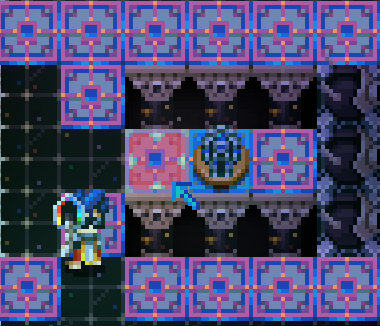 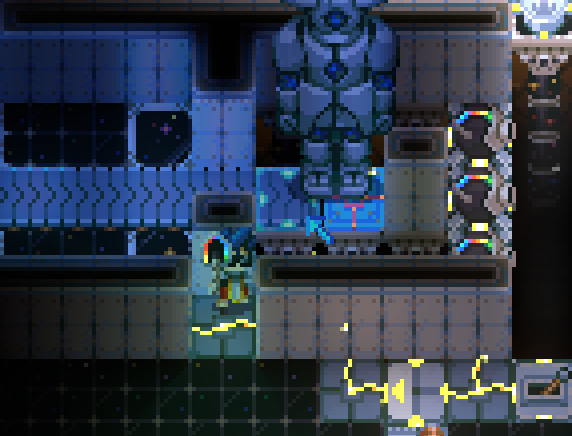 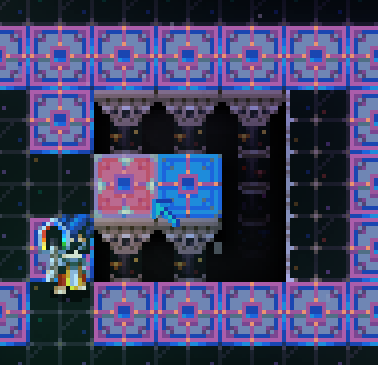 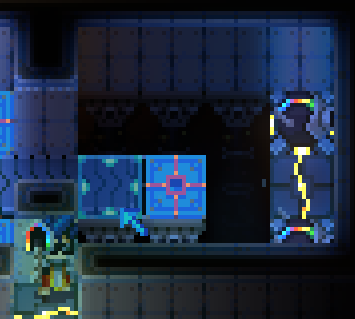 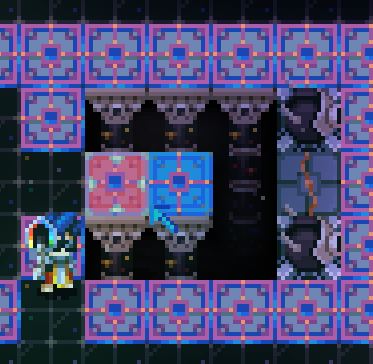 The benefit of using core sentries is to make use of their larger hitbox to stack turrets a tile closer than with slimes. This is more time consuming and only recommended for special cases. walls will be necessary to prevent them from breaking turrets whenever you run by, the images here will show how to build it step by step. set urban moss to start spawning core sentries before you start building. (colored tile meanings; red: remove later, purple: walls go there, blue: core sentry position) Each image has the player at the bottom left corner of each segment which would be 5x5

get the sentry on the belt and run away at least 28 tiles then go back in the position of the player in the image above and quickly dig out the belt and ground/bridge (tile marked in red in 2nd image). once its dug out and the belts are removed, place a wall in the single tile gap above and at the spot from where the player is located in the above image to fully wall off the sentry. the walls will help protect objects from other sentries while building but the center walls will need to be removed at the end for the turrets to shoot.

repeat the middle segment as many times as needed that's marked in green then build the end segment that's to the left of it. when done building, get the core sentries to be inactive by running away 28 tiles then run back and start removing the 3 walls in front of the turrets of every segment. you may want to remove 1 or 2 walls at a time then run away again to deactivate them to not risk them breaking the turrets. make sure to wall off the sides after removing the center walls to not aggro the sentries anymore.

This type of build would be useful for bosses when trying to get the the turrets closer to eachother, not exactly recommend in general since it requires more core sentries. the segments from all the builds can be stacked above eachother without the walls to cover more area for something like a slime boss. the core sentries in the image can be moved over to the left by another tile and the walls above and below can be extended out to have another 2 rows of turrets in its original place.