Before creating complex devices, first you must understand the basic parts that can interact with electricity.

The most crucial component in any circuit. Provides electricity to the four tiles adjacent to it. The electricity will extend for 24 tiles, getting weaker the further it extends from the generator.

Carries electricity from a . The wire's color will change when powered. It becomes less bright as it gets further away from a generator. It can be placed underneath other floor tiles to create hidden circuits.

Creates light when powered. The amount of light produced depends on the strength of the electricity in the wire it is adjacent to. For more light, place it closer to the generator.

Opens if powered with electricity, closes if not.

Can be toggled to allow the flow of electricity in a wire. It must be powered to let electricity through, unlike levers in Minecraft.

Only passes a current if it has electricity coming through exactly two of the three inputs. Can be rotated to change the output direction.

This will simulate one of the inputs of a without actually needing power, making it only require one input to pass a signal and closing on two inputs. Two s and a cannot be used to create a power source.

Will pass a current from the side or back and output it one second later through the output end, similar to the repeater in Minecraft, though it does not extend signals.

When powered, the the several possible functions:

Damaging a NPC it is pointing at, doing ~12 damage

Mining and destroying a wall or tile.Its primary use is to mine Ore Boulders as a infinite source of ore. When it mines a boulder or tile, the item dropped is outputted behind the drill.

When powered, the will pick up any item that is placed in front of it and place it behind it. This can be used to collect drops from farms and place them into chests, furnaces, or just about anything with a inventory you can fill. It can also take items from chests and other tiles with inventories. The will pick up a stack of items, not one at a time. s will also only take items from furnaces and the like from their output slot.

When powered, it will convert wood and coral to their respective plank types. 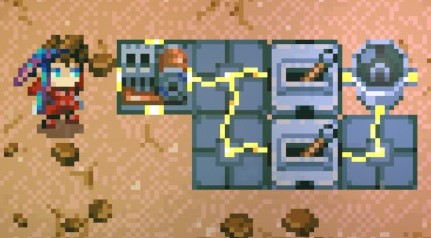 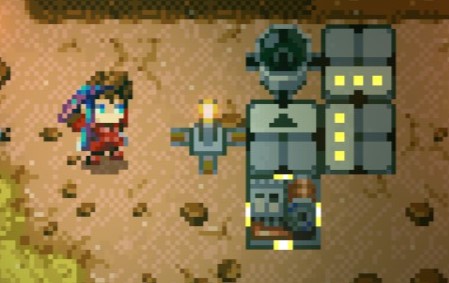 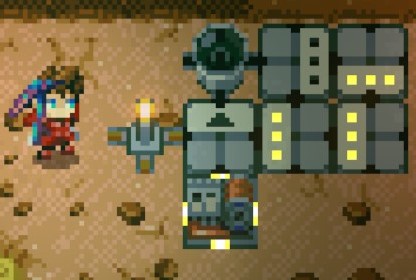 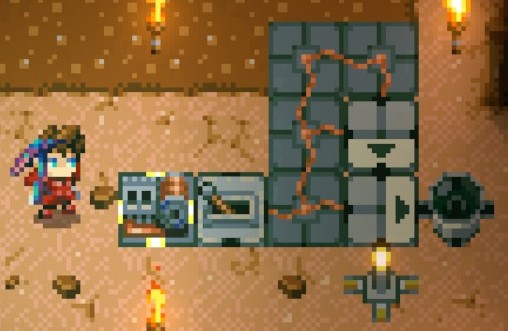 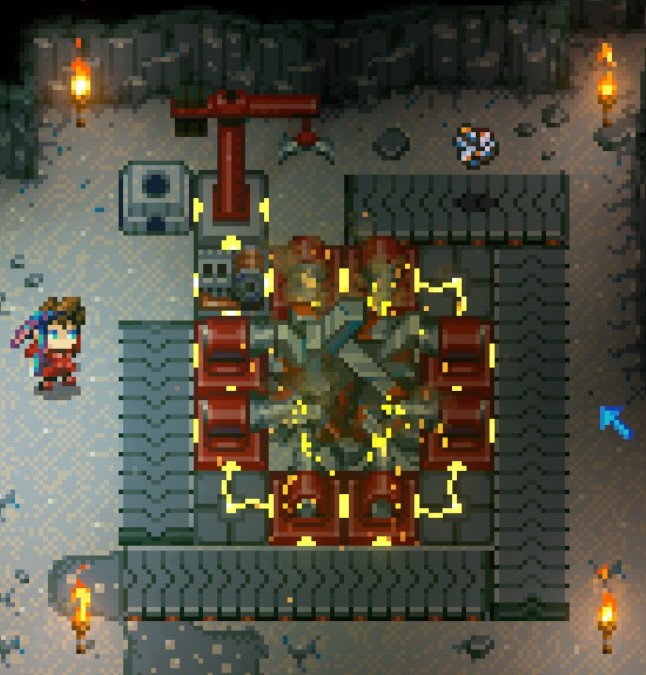 For all of the following circuits, the Lamp in each of them can be replaced with any kind of device you want to power in this way, such as Electrical Doors, Robot Arms, and Drills.

Levers can also be replaced with entire other logic gates for more complicated circuits.

This logic gate will only give an output when both of the levers are turned on.

This logic gate will give a output when either or both of the two levers are on.

XThis logic gate will only give an output when only one of the two levers are on, not both.

This circuit will periodically turn on and off the the lamp connected. You can change the duration by adding or removing Delay Circuits.

This circuit will only give an output for a brief moment when the lever is turned on.

With Drills pointed at Ore Boulders, you can create a simple farm to generate a steady stream of ore without needing to mine out the whole map. The more drills you use on a ore boulder, the faster it will generate ore. If you have several boulders nearby, you can use conveyor belts to bring them all to one place for smelting. Using a Furnace or Smelter Kiln instead of a chest allows the ore to be smelted automatically. Be aware a Smelter Kiln smelts more slowly than a furnace, so smelting high tier ores may create backup with more efficient farms. There are more in-depth guides on how ore drilling works than this simple wire guide. ZeroGravitas has a wonderful guide with charts that will greatly aid you in building efficient farms. You can find that here

This very simple auto smelter will take any ores from the left chest and smelt them. Smelted ores are then deposited in the right chest. You will need to have one Furnace/Smelter Kiln for each type of ore you plan on smelting at once. As of the Sunken Seas update, that would be three Furnaces and three Smelter Kilns.