The stock market is a minigame unlocked by upgrading banks to at least Level 1, and you can buy stocks and sell them for profit to gain cookies, or take out loans to directly improve your production for a short period. All prices in this minigame use your raw highest production this ascend, to prevent cheesing costs by selling buildings.

The stock market will tick every minute, and may move up or down, but there may be a tendency for it to move one way more than the other.

Each building, except for Cursors and Grandmas, are tied to a stock, as listed below

Your highest grandma count this run, combined with your grandma level, will allow you to buy Brokers, which can reduce the overhead (additional cost) associated with buying stocks.

Your cursor count, along with cursor level, will allow you to upgrade your offices for various bonuses.

When To Use The Stock Market?

For the most part, if you're not willing to commit to a multi-week run, and your storage space isn't at least 1000 for most, if not all goods, ignore the (actual) stock market once you've earned the Initial Public Offering achievement. In other words, you likely will want to get all the heavenly upgrades first. If you are willing, then it's time to start making profits.

Loans are good to use on the final combo of a run, as ascending removes all buffs and debuffs, and the first and second loans are also good to use on any uncommon combo (that you believe you would not be able to replicate within the next several hours) where you would gain at least half of your current banked cookies back.

The first loan is unlocked with a Level 3 office, and will give you 50% more production for the next 2 hours, but reduces your production by 75% for the following 4 hours. In addition, it costs 20% of your current banked cookies to activate as a down payment.

The second loan is unlocked with a Level 5 office, and will give you 100% more production for the next 40 seconds, but reduces your production by 90% for the following 40 minutes. In addition, it costs 40% of your current banked cookies to activate as a down payment.

The third loan is unlocked with a Level 6/maximum level office, and will give you 20% more production for the next 2 days, but reduces your production by 20% for the following 5 days. In addition, it costs 50% of your current banked cookies to activate as a down payment.

Stocks individually have a resting value, floor value, and ceiling value, and the stock market as a whole has a bank ceiling. These are not hardcaps, but they will affect how the price changes when near these caps.

The bank ceiling is $97, plus $3 for every bank level you have; this applies to all stocks, and the prices are somewhat restricted from rising above this value.

A stock's resting value is generally the average price of it, and can be used if you just wish to idly make gains. The base resting value of cereal is $9 and increases by $10 for each subsequent stock, up to $159 for subsidiaries. The resting value is also incremented $1 per bank level. Resting values may be above your bank ceiling, but they will still be attainable.

A stock's floor value is generally the softcap for the lower end of a stock's price, it is more difficult for a stock to keep dropping if it is below this floor value. The base floor value of cereal is -$91 and increases by $10 for each subsequent stock, up to $49 for subsidiaries. The floor value is also incremented $1 per bank level. However, stocks can never drop below $1, even though the floor is below this for many of the stocks.

A stock's ceiling value is generally the softcap for the higher end of a stock's price, it is more difficult for a stock to keep climbing if it is above this ceiling value. The base ceiling value of cereal is $59 and increases by $10 for each subsequent stock, up to $199 for subsidiaries. However, this value may be above your bank ceiling, making it doubly hard to attain this value.

Stocks are not bought at face value, there is some overhead applied to them, a multiplicative cost directly added on the stock's value at purchase time. This is lost profits, and you will have to sell your stock at more than the purchase price plus overhead to actually make a profit. Brokers reduce the overhead by 5% multiplicatively, so after several dozen of them, the effect of buying an additional broker is minimal. No brokers incurs an overhead of 20% when buying a stock, 10 has an overhead of 11.97%, 50 has an overhead of 1.54%, and 100 has an overhead of 0.12%. Brokers cost 20 minutes of your highest raw production this ascension, and you can buy up to 10% of your total grandma count, plus grandma level, rounded up.

Except by remembering it yourself, there is no way to know how much a stock costed when you purchased it.

The Stock Modes And Strategy 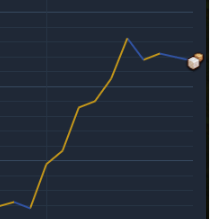 Stocks will generally follow one of the following 6 patterns, each with their own characteristic. Each stock will be in one of these modes; some stocks may be in the same mode at the same time, but not all of them will.

In this mode, a stock will generally have an upwards trend; there may be small dips occasionally, but the overall trend will be upwards; buy (or hold if you already own it) this stock if it is not near its ceiling. This is usually the best way to make nearly guaranteed gains.

Rare to see, this is basically Cookie Clicker's version of stonks, stocks will slope steeply upwards, with occasional dips, if you have any stock hold on to it, once it begins falling sell, if it continues rising you can always rebuy it later. Fast rise is typically followed by Fast Fall, in addition to not lasting long, so if you see it happen, pay very close attention or not only could your quick gains be wiped out, if you rebought stocks after selling you might even be at a loss.

In this mode, a stock will generally have a downwards trend; there may be small rises occasionally, but the overall trend will be downwards; sell this stock if it is not near its floor. If it has gone far below the stock floor, or is below $5, buy.

Basically Cookie Clicker's version of a stock market crash, stocks will slope steeply downwards, with occasional spikes, if you have any stock sell once the falling trend becomes clear and wait til it reaches below $5 (stocks with a lower price floor), far below (about $15) its floor value, or once a rising trend becomes clear. If you wish to minmax you can also buy on either of the earlier conditions and sell after any major spike; this strategy works well for quick gains, but only while in fast fall mode and nearly at minimum. Typically spikes will be at least 50%, but can reach around 200%.

In this mode, a stock will generally be flat, it may go up and down slightly but will generally hover flat; if you own any stocks in this mode hold onto it, but avoid buying unless it is below resting value.

This is when there's no clear trend, just jumping around, but also isn't flat like stable; in this mode it's best to not buy unless the stock is well below resting, if you have any stock hold on to it.

Generally if you don't want to pay attention to the game every single tick simply buy things well below resting value and anything in slow rise, and check on the game once in a while, sell once they're far above resting value. If you are actively watching the game you can take advantage of stocks below $5 and sell after major spikes for quick profits.

If you're aiming solely to get Initial Public Offering early on in the game, buy 1 of a stock that's well below resting, it will be best if it's below $10, then sell it once it's gone up at least 20% from what you bought it at.

Pyramid scheme - Unlock the highest-tier stock market headquarters (Estimated time, however long it takes you to get 700 cursors and Level 12, 78 lumps spent on cursors)

Gaseous assets (shadow) - Have your stock market profits surpass a whole year of CpS ($31.536 million*). (Estimated time, 4 months active)*Profits reset upon ascending, so it must be done all in one ascend. Consequently, you will have a very long ascend.

I am new to writing Steam guides, so if something just doesn't seem right with appearance/formatting (excluding if there are any sections clearly marked as in-progress), something's clearly missing, or there's some other error or inaccurate information, feel free to shoot me a message on Steam or on Discord (Vaporeon2Timez#1111).