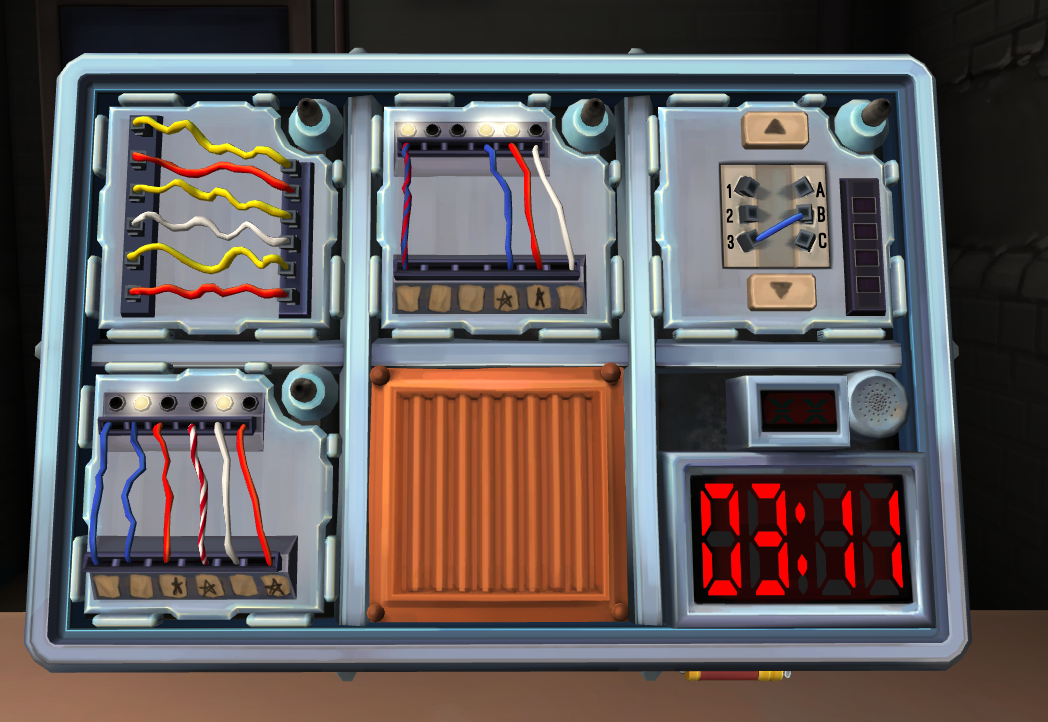 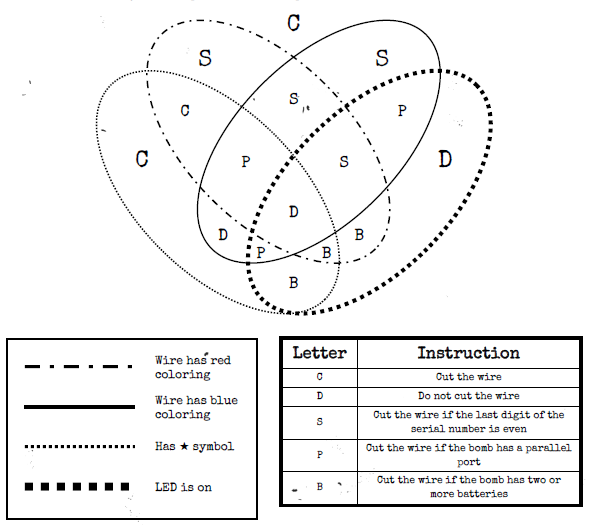 Complicated Wires are found on page 13 of the Bomb Defusal Manual.[www.bombmanual.com]

Complicated Wires are similar in appearance to Wires (page five of the manual), but with several key differences. They are vertical, they sometimes have a stripe instead of being solid, they have an LED (which may or may not be lit), a piece of paper (which may or may not have a star drawn on it), and they can only be red, blue, or white (or a striped combination of any two of these colors). There are 4-6 wires on each Complicated Wire module, and you will always have to cut at least one wire.

Here is an example of a bomb with Complicated Wires:

The process for completing a Complicated Wire module is as follows:

If needed, have the Defuser identify further information about the bomb to determine whether or not to cut the wire

Repeat steps 1-3 for each wire

The Venn Diagram used by the Expert is pictured here:

This diagram is likely to be problematic. However, with some practice, interpreting it is simple.

As you can see, each of the four ellipses represents a different trait:

The presence of the color red

The presence of the color blue

The presence of a star

The presence of a lit LED

Identifying whether or not to cut the wire is a simple matter of finding the point where all the traits (represented as ellipses) of the wire overlap, and following the instructions given by the letter found.

Remember, parallel ports may found on one of the four sides of the bomb and look like this:

Parallel ports may also be found in Appendix C on page 23 of the manual.

As the Defuser, it is important that you don't overwhelm and confuse the Expert with information that they simply don't need.

In general, there are a lot of unneeded details in Complicated Wire modules. Here they are:

White wires with no lit LED or star. Always cut these, do not bother consulting the expert unless you forget this simple rule.

Blue and red striped wires with a lit LED and a star. Never cut these, do not bother consulting the expert unless you forget this simple rule.

White stripes. White stripes have no significance. For instance, if there is a blue and white striped wire, simply treat it as solid blue. Do not bother informing the Expert about the white stripe, this will merely confuse them.

A lack of any given trait. Do not mention a trait to the Expert unless it's present. For instance, if there is a white wire with a star and an unlit LED, do not say "White wire, no LED, star." Just say "star." The Expert should quickly get the idea.

Identifying information that could be useful

While this is not always necessary, and has a chance to be a waste of time, consider doing this. Tell the Expert whether the last digit of the serial number is even, whether the bomb has a parallel port, and whether there are two or more batteries before getting started on the module. This way, the Expert will not have to consult you regarding certain wires.

Since ten of the fourteen wire types (wires with no traits and wires with four traits have not been counted) will require additional input from the Defuser, this is very likely to save time. 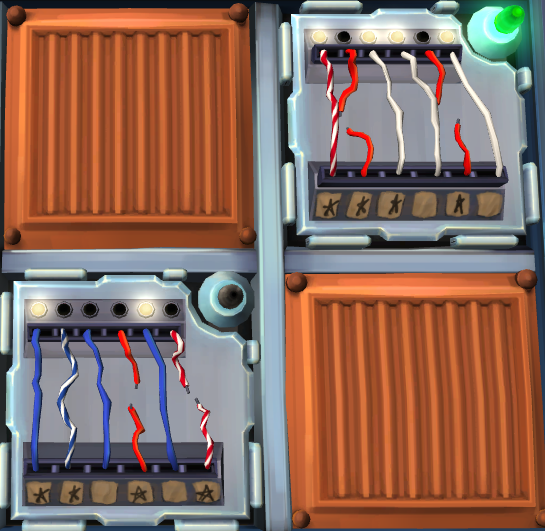 Simple wires were mentioned in the last section, but it is important to keep them in mind as they can save an incredible amount of time.

Simple wires are those with no traits (white wires with an unlit LED and no star), or four traits (blue and red striped wires with a lit LED and a star).

If two or more wires are identical, then they all follow the same rules. That is to say, if you cut one wire, you also cut all wires that are identical to it. Keeping in mind that white stripes have no significance (that is to say, a blue and white striped wire is essentially just a blue wire), you can make Complicated Wires much more manageable with this trick.

Of course, this applies across multiple modules. For instance, let's say you have two Complicated Wire modules on one bomb. If there is a wire that you have determined can be cut on one module, then you could then go on to safely cut any wires identical to that one on the other module.

Here's an example of identical wires on a bomb:

As you can see, between the two modules, there are a total of four red wires with stars. By determining that one should be cut, the Expert was able to determine that all four should be cut. Note that one of the wires has a white stripe. As mentioned, this has no significance.

This trick saved a considerable amount of work in the successful defusing of both of these modules. In fact, the upper-right module was very luckily defused as soon as those two wires were cut.

One last trick to keep in mind when dealing with Complicated Wires is the process of elimination. If you have accurately determined whether or not to cut every single wire in the module, except for one, and the module is still incomplete, you can safely cut the remaining wire in order to complete the module.

With everything you've learned so far, this is something you should be able to figure out on your own. Regardless, by quickly feeding information to the Expert and leaving out anything extraneous, you can burn through these modules much more quickly.

First of all, leave out simple wires.

Second of all, do not mention traits that are not present.

Third (optionally), tell the Expert important traits of the bomb ahead of time.

Fourth (optionally), abbreivate all the traits you do tell the expert. Recommended only for experienced players who fully understand Complicated Wires.

Here are ways in which efficient players may communicate wires:

A red and white striped wire with a lit LED and no star: "Red, LED."

A red and blue striped wire with an unlit LED and a star: "Red, blue, star."

A white wire with a lit LED and no star: "LED."

A red and blue striped wire with a lit LED and no star (abbreviated): "RBL."

Some wires are more difficult to deal with than others, and you will want to be careful about the order in which you go through wires in order to complete Complicated Wire modules as quickly as possible.

Wires with a single trait are very easy to identify since they only appear near the edge of the diagram, so start with these.

Wires with two traits are generally easy enough to identify as well, but sometimes they are in awkward spots on the diagram.

Finally, wires with three traits are usually the hardest to identify, being in the middle of the diagram where it is hard to determine where overlaps occur.

Keeping this in mind, do wires in order of how many identical ones occur and how easy they are, from most to least.

Then, if only single wires remain, do them in order of how easy they are, from most to least.

Thank you for reading my guide! If you have any other tips to suggest, or want to recommend a change in wording, feel free to say so in the comments. In addition, please inform me if I have made any grammar or spelling errors.

Good luck in all of your future wire-based endeavors!