A Beginners Guide to Alchemist Adventure

If you are just discovering Alchemist Adventure and wish to learn the basics of the game then you have come to the right place.

What makes Alchemist Adventure unique is its intricate alchemy system that calls upon you to craft potions that are then used in lieu of (or sometimes side by side) the more traditional RPG mechanics such as combat. 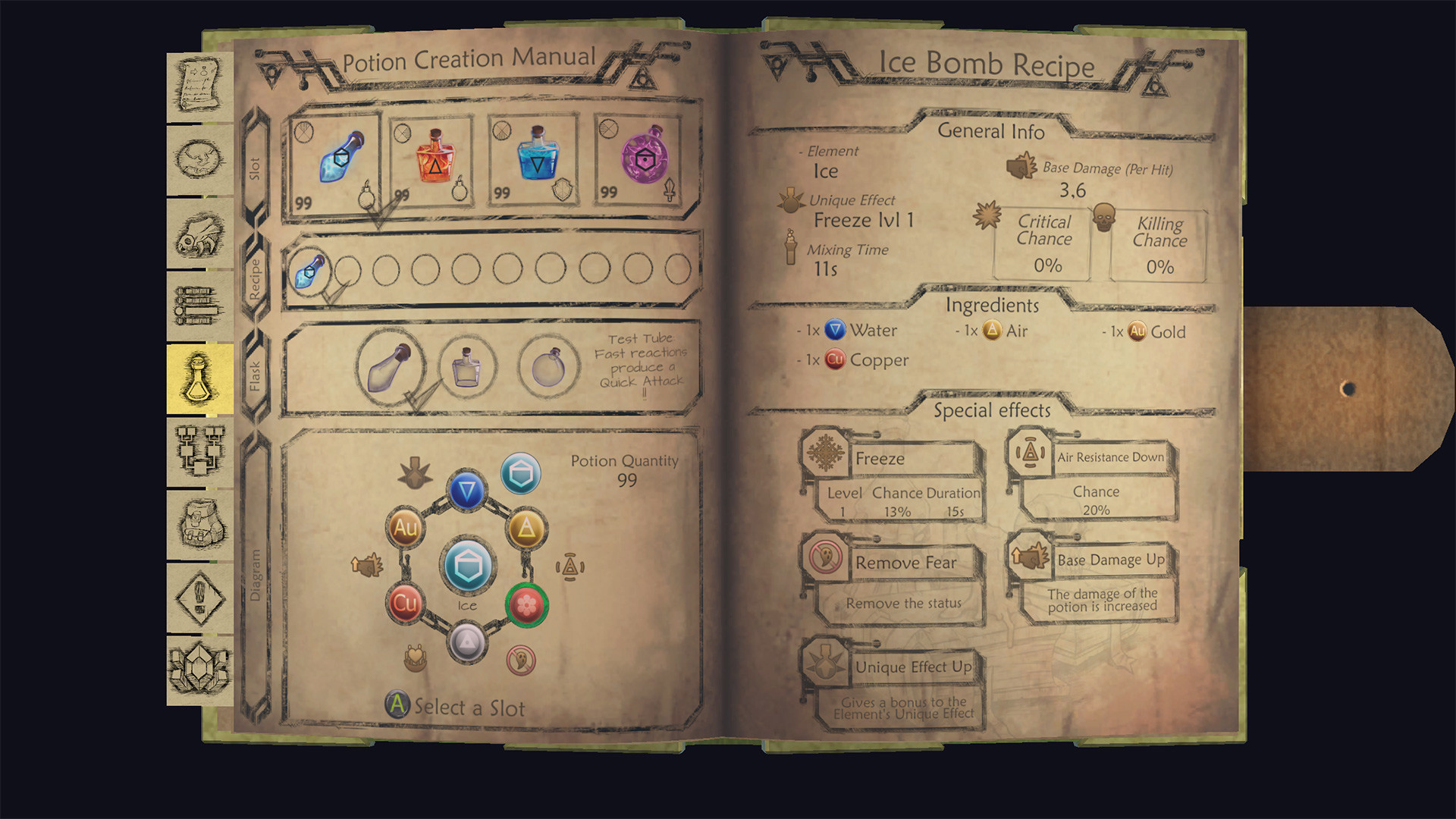 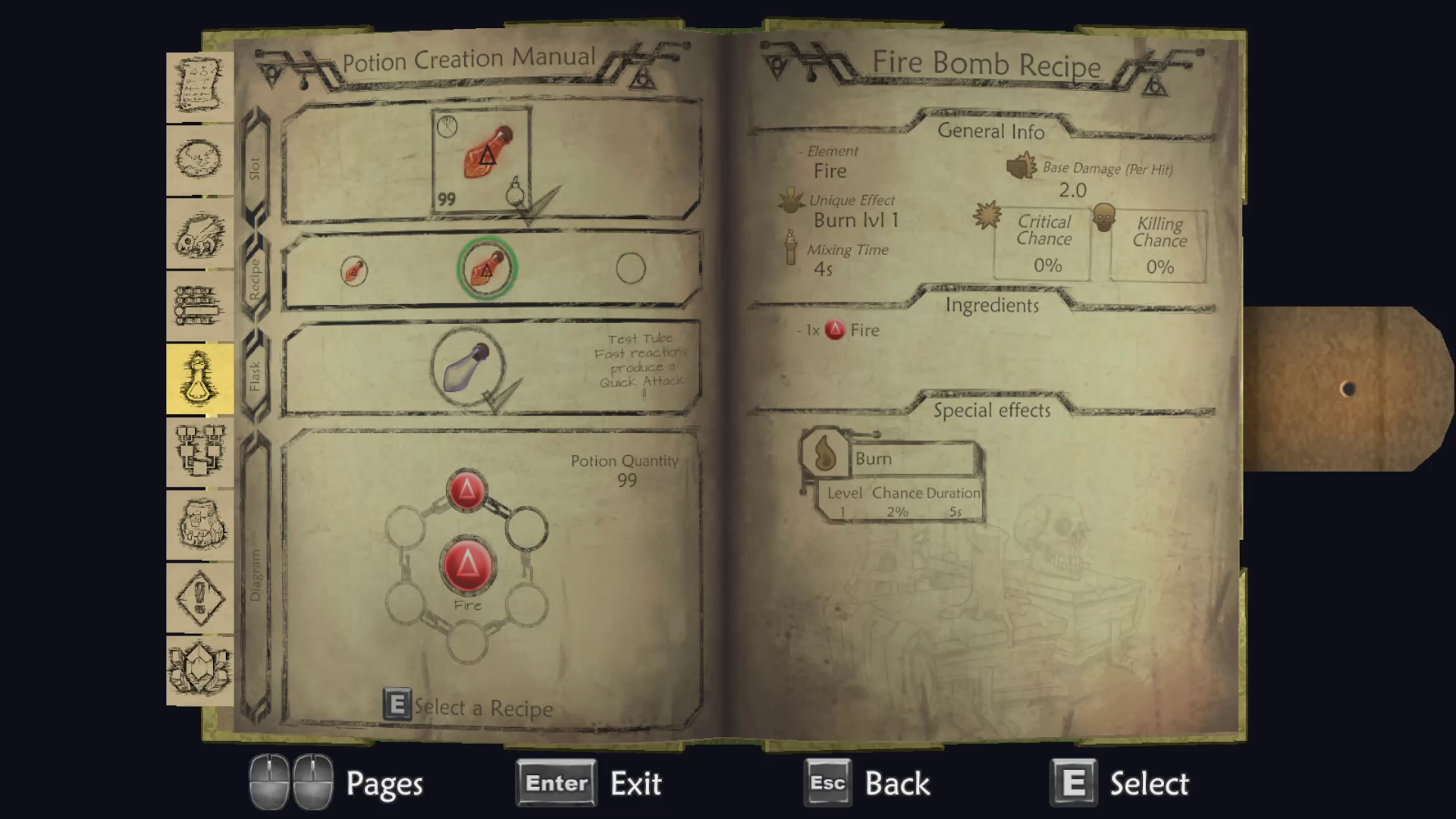 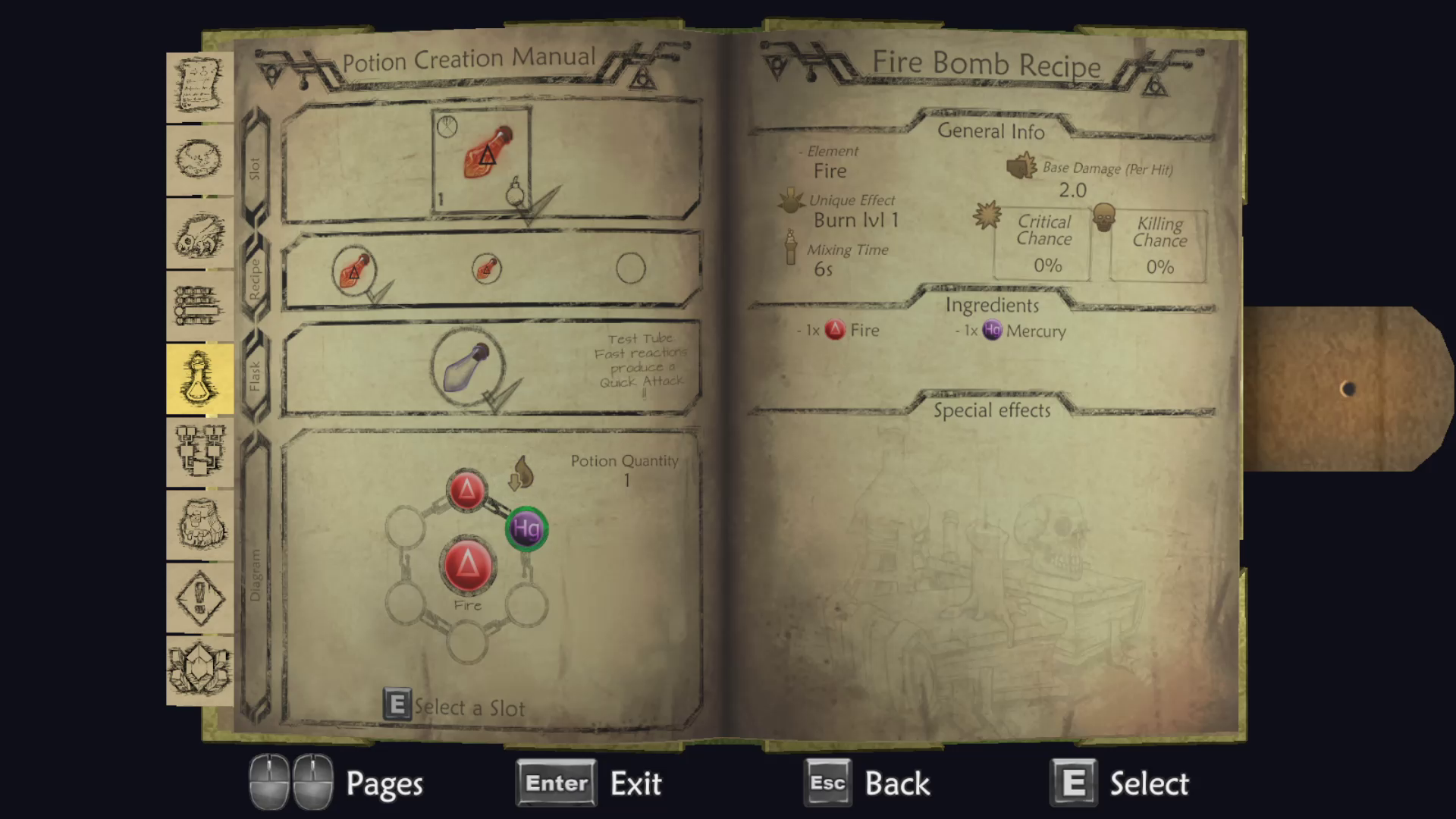 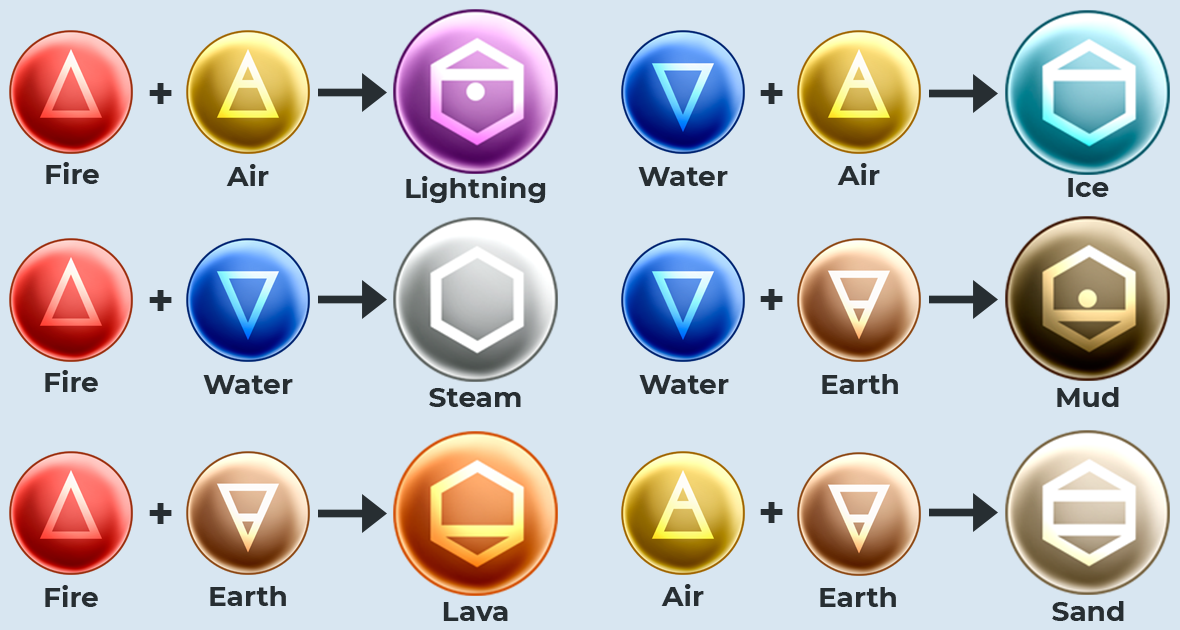 The core mechanic of Alchemist Adventure is the alchemy system. This is the system where the player combines elements, metals, and special resources to form potions.

However, unlike regular potions, these not used as a drink to recover your life points, stamina, and so on, instead, they are used as items that are thrown at the target, what happens after that is entirely based on the potion itself.

At most, a potion can have five different ingredients. Though this sounds simple on face value, this becomes incredibly open as every combination leads to a different potion.

For example, a simple potion would use only the Fire element which produces a Fire Bomb. This potion will explode when it hits the ground or its target, burning the area around the impact zone.

As you can see, this is a very basic potion. However, you can improve the potion by adding in Metals and/or Special Resources. Depending on what you use, the potion will be granted more special effects.

But be warned, not every resource works well together, for example, if you mix Fire with Mercury, the potion loses all of its special effects as Mercury is used to reduce the effects of fire.

Finally, we come to elemental combinations. Though you need to pick at least 1 element to create the base potion, you can in fact add more elements to the same potion. When this happens you create an all-new element that changes what the core of the potion does.

There are a lot of possibilities and combinations, so be sure to try them all! 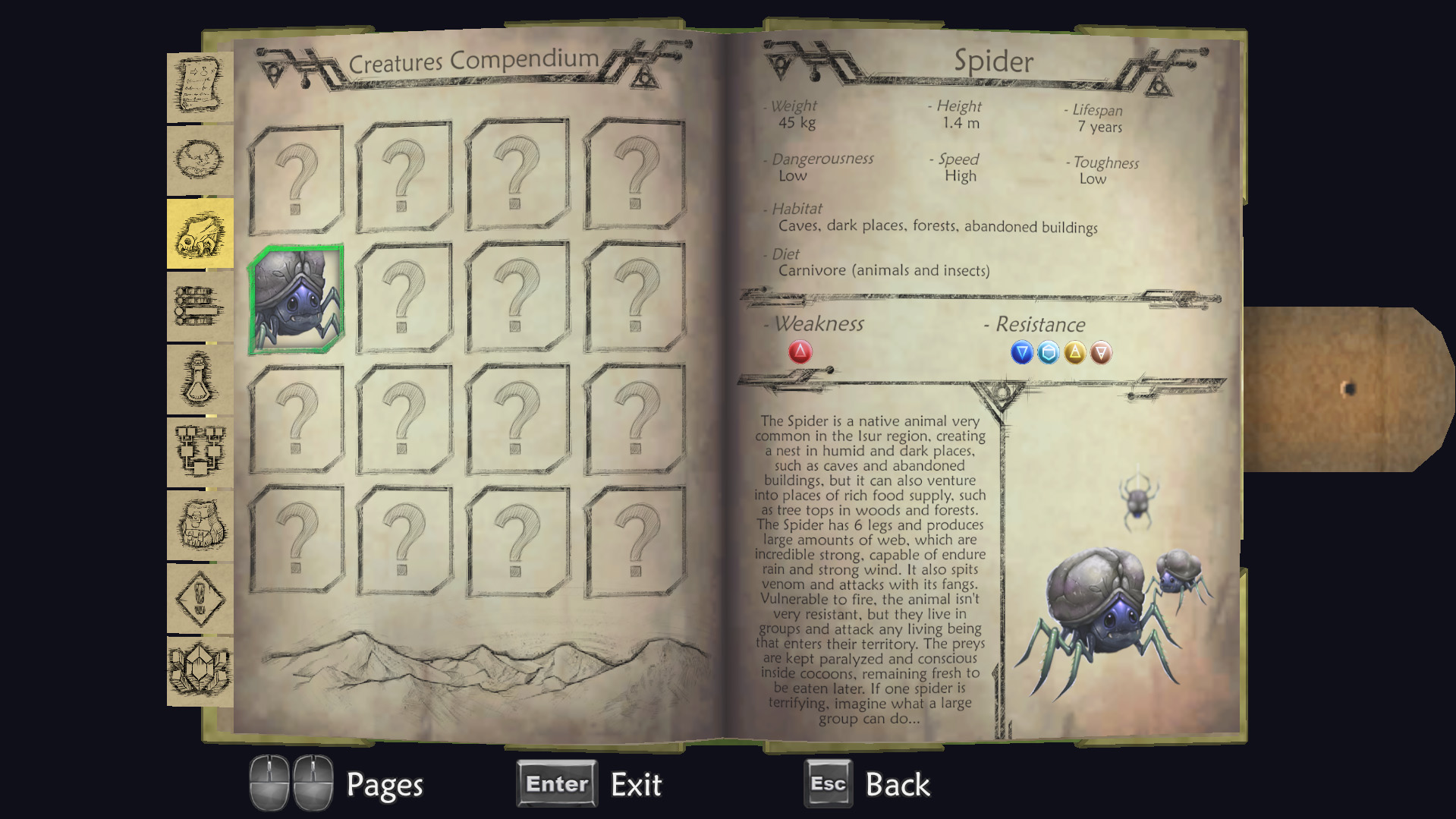 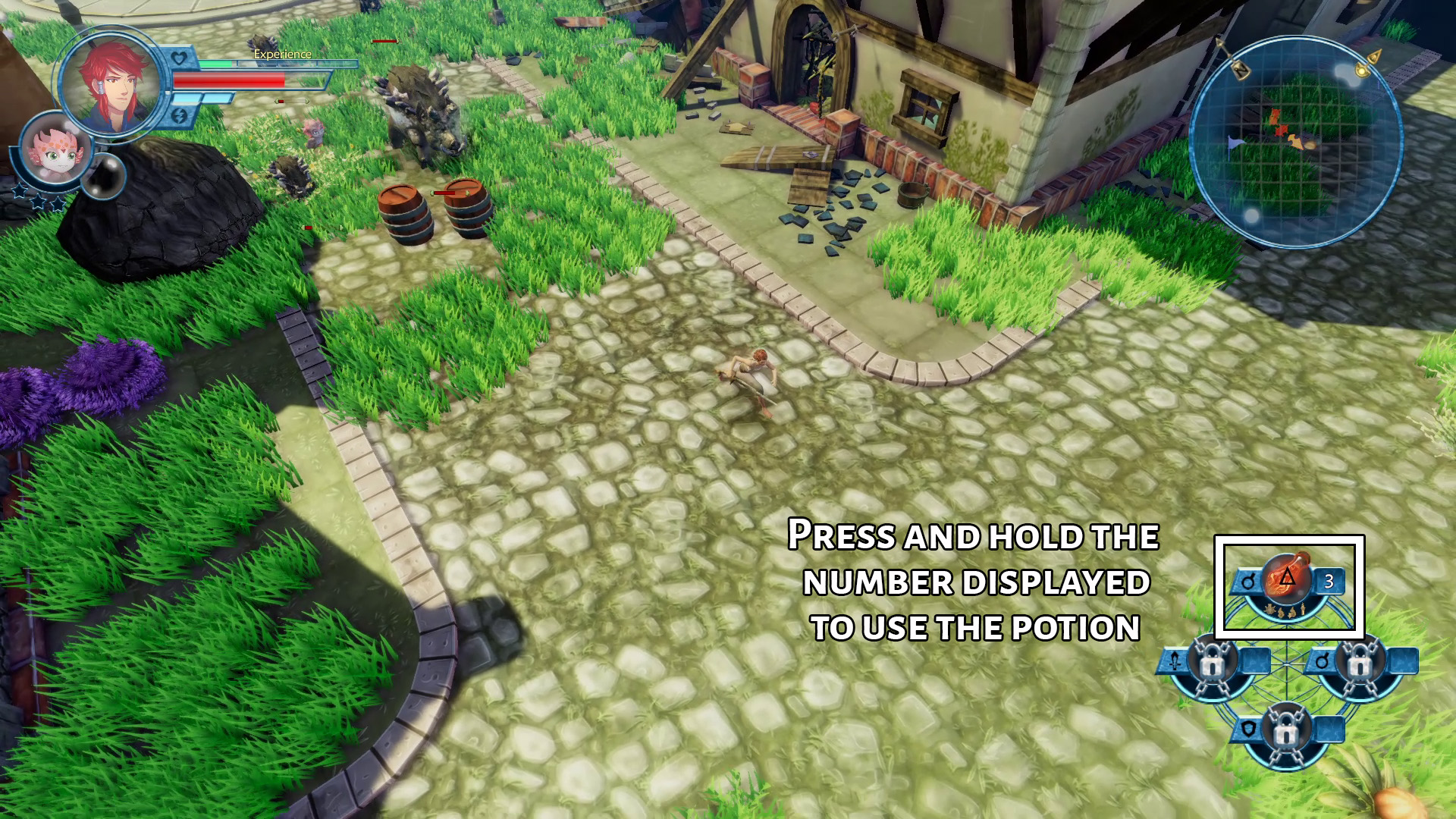 Now that you have created your potions, you will no doubt be wondering what you can use them for.

This section looks on the combat use of the potions.

CombatThough you may think that this goes without saying, the alchemy system's integration into the combat system is much deeper than you may think. The reason for this is that every creature in the game has a set of weaknesses and resistances.

So, even though you get a basic weapon early on in the tutorial/introduction part of the game, the weapon is only really used during your potion cooldowns (or to break basic items in search of resources).

What you will want to do is find the scattered books in the game that will add pages to your Creatures Compendium. Once you have a page, a specific monster will be shown and you will get to see the various weaknesses and resistances that it has. Be sure to memorize the weaknesses as it would make fighting much easier!

One other important point to take note of is that you will need to know what the symbols displayed under 'strengths' and 'weaknesses' stand for.

This is shown in-game when you are making potions, but you can always refer to the image above.

So that's the background of using potions in combat, but what about actually using them? The procedure is quite simple.

First, you need to create the potion, to do so follow these steps:

Hit Enter to open the potion page of your book.

Select one of the pre-sets (this is important later on).

Choose the ingredients that you want to use.

Once the potion is created, return to the active part of the game, play as normal until you encounter an enemy or a group of enemies.

To use the potion, all you need to do is press and hold the number that is next to the potion displayed on the main UI.

It is important to hold the number as doing so will activate the targeting screen - and will also slow downtime for a short while (but not permanently, if you take too long, time will return to normal).

Use your mouse to move the target location of your potion to where you want it to land and let go of the number key that you are holding.

Using Potions Outside of Combat 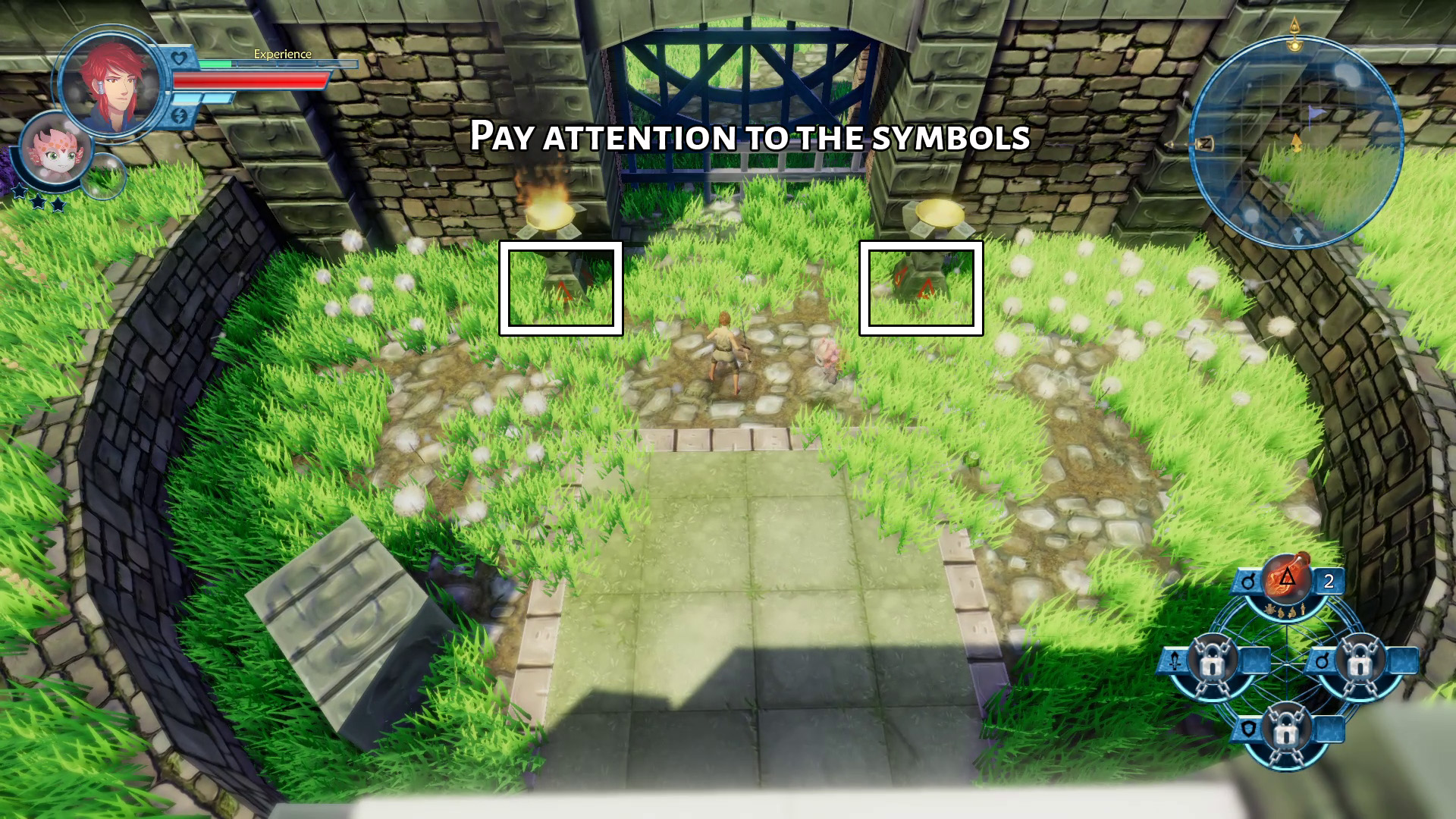 In the previous section, we looked at how potions are created and used in combat. However, that is not the only use case of the potions.

PuzzlesAs the potions represent a specific element, it is only natural that there are specific areas that will interact with these elements.

Here is a very simple example.

In the screenshot above, the gate is very obviously closed. However, next to it are two braziers, both of which have the symbol that represents fire in our elemental system.

This means that there is going to be some sort of interaction between fire and this object. To see what happens, you will need to create a potion that uses the element that is shown (so in this case fire) and throw the potion exactly on top of the brazier. This will then trigger the interaction and 'something' will happen.

In the case of the example above, when both fires are lit, the gate will open.

You can see this in action in this short clip!

Interacting with the Environment

Throughout the level, you will find multiple objects that, on face value, look like simple decorations. However, we've made an effort to have as many objects interact with the potions. That means that if you find a haystack you can throw a fire potion on it and it will burn down. That would be of interest to you (as a player) as doing so will usually reveal many alchemy related crafting items.